(Praise the Lord and pass the ammunition!!)

Today we are going to meet another French vehicle from WWI. This small carrier was designed,  conceived and built to feed the hunger of the guns of the newly born French self-propelled artillery. Let's meet this mysterious girl, the prototype Renault FT Chenilles porte munitions (Renault FT tracked ammo carrier). 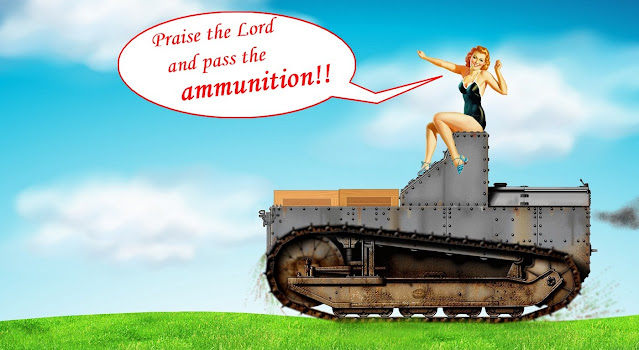 Logistics has always been (and is...) one of the most important pillars of the War, since time immemorial. The need for supplies for soldiers, whether it be food or weapons, and maintenance of their equipment is simply vital. And when we talk about artillery, whether conventional or self-propelled, logistics can be summed up in one word: ammunition. The cannon is useless without the projectile it fires. And in the First World War, where artillery reigned supreme, this truth was once again confirmed.

With the advent of self-propelled artillery and the mobility that this weapon acquired, its supplies needed to be agile enough to keep up with it. Since the cannon was mounted on a vehicle equipped with tracks for all-terrain mobility, nothing more logical than the vehicles that supplied this same artillery had the same characteristic. With this in mind, many projects were planned to build tractors and ammunition carriers that could accompany the now extremely mobile self-propelled artillery.

And a logical option would be the use of the same chassis used by the self-propelled artillery, to facilitate the maintenance logistics itself and for the similarity of performance on the Battlefield.  Renault produced a prototype in 1918 of a tracked munitions vehicle with a central drivers position and an open cargo compartment with a hinged gate at the front. The volume of the cargo compartment was 1.5m x 1.05m x 0.9m.

Another problem was related to the design of the adaptation of the cargo area in the front portion of the tank, with the straight front cargo gate greatly decreasing the angle of attack, making it difficult to maneuver on the battlefield

Comparing the WarDrawings art with the existing photo, I think that the shape of the driver's casemate was a bit flatter in the drawing. I modified the Wardrawings design, lengthening the driver's station to a (in my opinion) straighter, taller profile, adding ammo craters and restoring the length of the tail, which in the drawing is too short.
Another interesting detail is the presence of the pig-tail hook in the rear, which I only noticed in the original photo after writing this article and building (and delivering...) the kit. A very small but important detail... Too bad I didn't get to see this before the kit was delivered, but the profile drawings below and 3 views have been fixed....

Only one prototype was produced, but it's hard to see a role for this little vehicle when the existing Renault FB Artillery Portee and Schneider CD tractor could carry much more ammunition.

Due to its poor maneuverability and low payload capacity, the project was discontinued. The fate of the single prototype built is unknown, with the most likely dismantling. 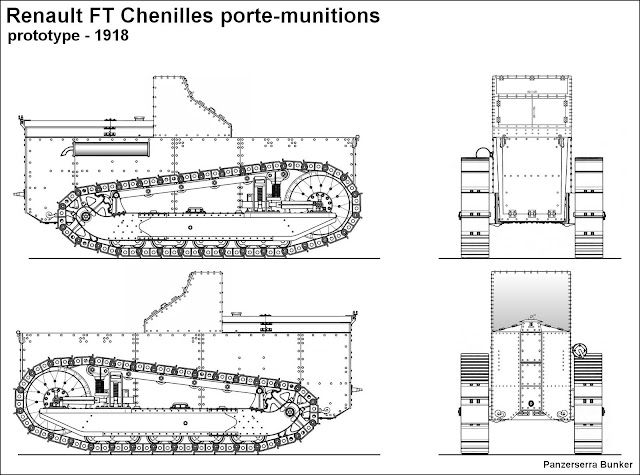 The kit:
This is another commission work by a good friend of mine in France. Another Vargas Scale Models 3D printed kit. The history of this kit, in particular, was quite troubled: my french friend sent the kit for my construction and that same kit, along with Renault FT Chenilles 75mm Mle 1897 walked through the mazes of Transportation Companies and Customs, never being delivered, being considered as "Missing In Action" until, 6 months later, as if by miracle, they returned to my friend home, in France.
My colleague wrote, surprised by the Prodigal Son's return and, once again, sent the kit to me, and this time, it arrived without any problem... At least that's what I thought...
I opened the kit box and found a colored sheet with instructions and printed parts, in blue-gray plastic...

But when looking at the pieces, my stomach froze: many pieces were missing, according to the instructions sheet. Immortal Gods!!!
It would be very easy to put this blame on the manufacturer's back, but honestly I think the lost parts were due to the lack of care of Customs when opening the box and that somehow the zip-lock bag with the missing parts got lost... The box was open and its contents all messed up...
Whatever it is, I searched in the manufacturer's website and this kit is discontinued: I was looking for a photograph of the missing parts... I wrote to Luis Vargas (owner of Vargas Scale Models) on Facebook and he IMMEDIATELY answered me and offered to send the missing parts, free of charge. His service was immediate and very courteous. Luis sent me a photo of the complete set of kit parts, which I couldn't find anywhere. The photo is this:
The missing parts are: engine exhaust, towing hooks at the rear of the chassis, cargo compartment gate, upper driver's hatch, engine cover bolt and the cargo itself (ammo crates and some projectiles...)
The problem with the postal sending these parts from the United States to Brazil is the time factor: at least 3 to 4 weeks, which would coincide with a long trip I'm going to take. When looking at the photos, I realized that I could make the missing pieces in scratch, as they are mostly straight. The only problem is the 75mm bullets, which unfortunately, I don't have them...
Good news: some extra (spare) parts from the Renault FT17 75 BS tank  kit will be able to be used, such as the towing hooks and the engine cover bolt. This already helps a lot!!! But let's see what we can do...
After that little thrill, let's move on... Starting by the body of vehicle !!  Thank Gods, no bent or damaged parts here... A real relief, after the scare with the Renault FT17 75 BS tank. The print lines are also much less sharp and evident... A better model, without a doubt!!!


With the suspension in place, let's build the front gate, based on the original photo and the photo of the kit parts: plasticard and Plastruct  1,2mm Tee

After everything is in place, let's get to painting. This small carrier was a prototype, with no markings or camouflage. At that time, the use of green color was very common in the French Army. therefore, we are going to use Vallejo's olive green as a primer


Instead of filling the cargo area with crates that will "disappear" from view when they are stacked in the cargo area (and also generating weight for the kit...), how about we fill this dead area with styrofoam, to alleviate the weight on the suspension?? We save weight and resin details...


And finally our little cargo girl was ready. I can tell you that it was one of the most fun projects of recent times, without a doubt... I'm starting to get addicted to these Vargas Scale Models kits: They really are a lot of fun to build!!!
With you, the only and exclusive Renault FT Chenilles porte munitions, with her cargo being transported, in the testing fields of France, in 1918.

This was a very fun construction, and the lack of parts did not affect the development of the project at all. Once again, I would like to thank Luis Vargas for his prompt customer service, even though I am not the primary purchaser of the kit. I hope that the suggestions presented in the report can be of use to the manufacturer to further improve the already very good final product.
Et n'oubliez pas:
(And don't forget)
See you, soon!!!
às junho 01, 2022 4 comentários: