The subject of this article is about the best-armed variant of the fast British desert tanks. Let's meet the Crusader Mk.III, armed with the efficient 6 pounder gun. 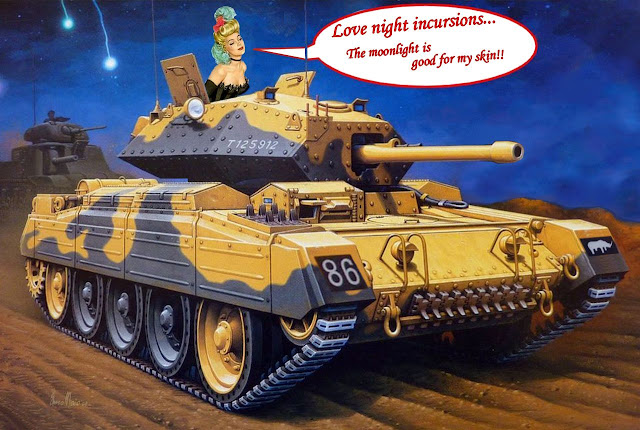 History:
The Tank, Cruiser, Mk VI or A15 Crusader was one of the primary British cruiser tanks during the early part of the World WarII. Over 5,000 tanks were manufactured and they made important contributions to the British victories during the North African Campaign. The Crusader tank would not see active service beyond Africa as gun tank, but the chassis of the tank was modified to create anti-aircraft, fire support, observation, communication, bulldozer and recovery vehicle variants.
The first variation 'Crusader I' tank entered service in 1941, and, though manoeuvrable, it was relatively lightly armoured and under-armed. Improved armour thickness to 49mm marked out the "Crusader II' variant.

The Crusader III was more than a match for the mid-generation German Panzer III and Panzer IV tanks that it faced in combat. As part of the 1st Armoured Brigade, the Crusader was to prove vital during the Battle of El Alamein, at Tobruk and in Tunisia.

Retained in service because of delays with its replacement, by late 1942, the lack of better armour, plus reliability problems due to the harsh desert conditions and the appearance of Tiger I heavy tanks among the German Afrika Korps, saw the Crusader replaced by US-supplied M3 Grant and then by the Sherman medium tanks. More about all versions of Crusader, see in this Bunker's article.

Crusader Mk.III:
Due to delays with the Cruiser Mark VII Cavalier and the need for cruiser tanks, the Crusader was up-gunned with the 6-pounder, the first British tank to mount this gun. Design work for a new turret started in March 1941, but Nuffield was not involved until late in the year, when they adapted the existing turret with a new mantlet and hatch.


The turret also received an extractor fan to clear fumes from the firing of the gun. The larger gun restricted turret space, so the crew was reduced to three, with the commander also acting as gun loader, a role previously performed by the wireless operator. The auxiliary turret space was given over to ammunition stowage. 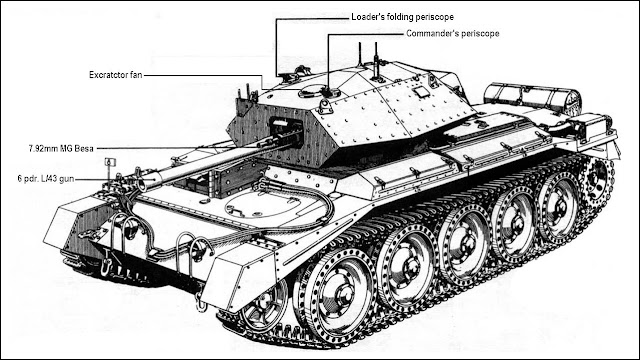 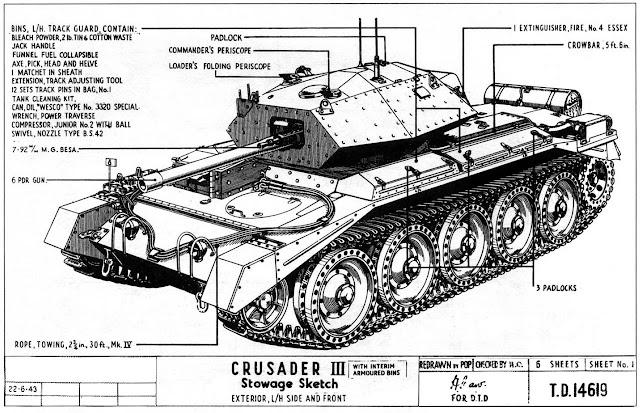 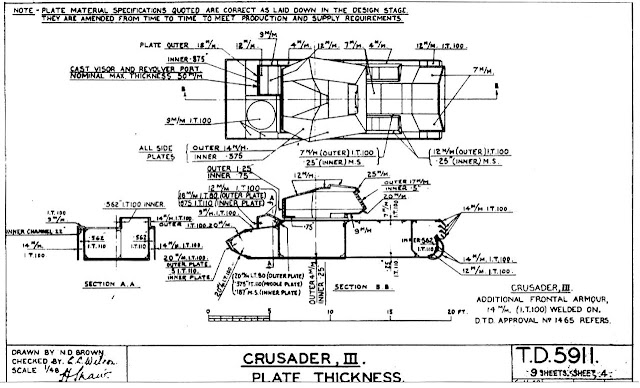 Crusader III also saw the introduction of the Mk. IV Liberty engine, fixing many of the reliability issues previously encountered. This featured the Mk. III engine's later updated water pumps along with a shaft drive replacing chain drive for the cooling fans. 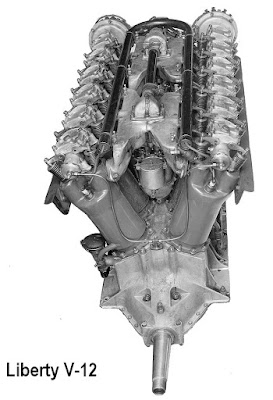 Production started in May 1942 and 144 were complete by July. The Crusader III first saw action, with about 100 participating, at the Second Battle of El Alamein in October 1942.
The initial vehicles of Crusader III series were armed with the Mk III version of the 6pdr gun (QF 6pdr. Mk.3 L/43). The final vehicles were armed with the long barreled QF 6pdr. Mk.5 L/50, with more penetration power. 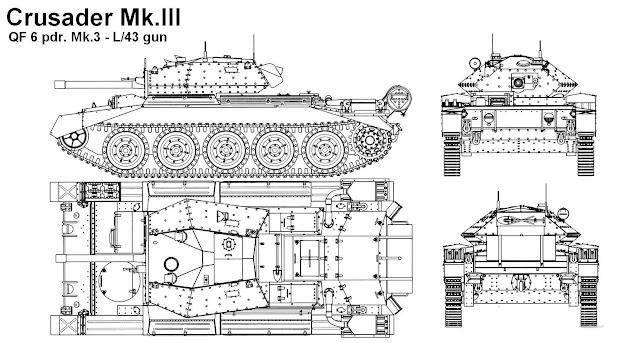 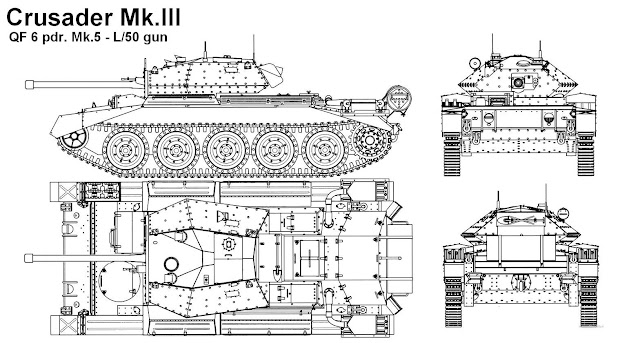 The kit:
For this building, I have an old kit from Testors / Italeri (# 812) Crusader III. This kit is from the time that Tutankhamun was in kindergarten!!
It is so old that the instruction booklet is written in hieroglyphics on a papyrus!! Kojak had to take a Course of "Ancient Egyptian and Hieroglyphs for Beginners" to face the challenge ...

And as we are detailing, lets correct a fault in this kit of Italeri .. A very old failure: the absence of the exhaust of the engine.
I was forced to drink a beer to do this detail ... We really sacrificed ourselves for our hobby !!

And now, the moment of irreversibility: Our young lady leaves the Desert (short 6 pdr.) and goes to the green fields of England, in the hands of the brave combatants of the Czech Independent Armored Brigade: long gun 6 pdr. Mk.5 - L / 50, characteristic of the last Crusaders.

The future marings of my girl: Crusader Mk.III with 6pdr. Mk.5-L/50 gun, belonging to Czech Independent Armoured Brigade, in drills in England, October, 1943.

The building of kit is finished!! 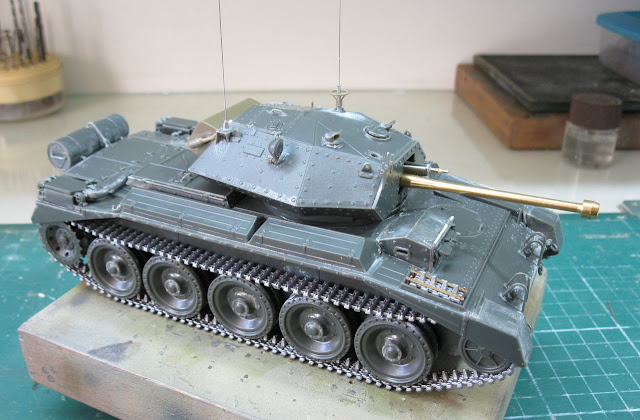 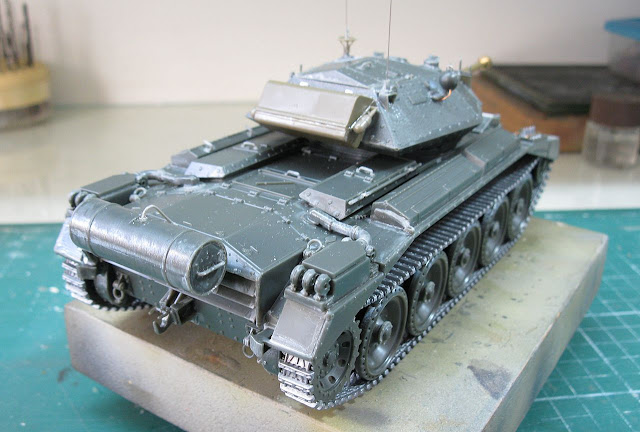 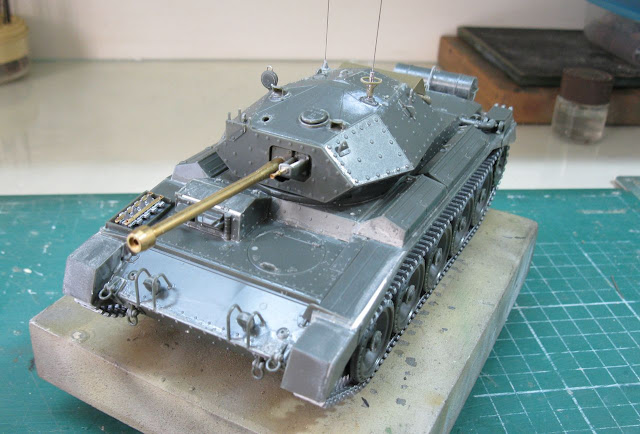 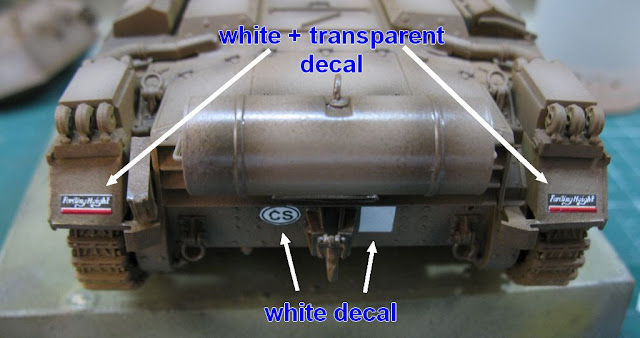 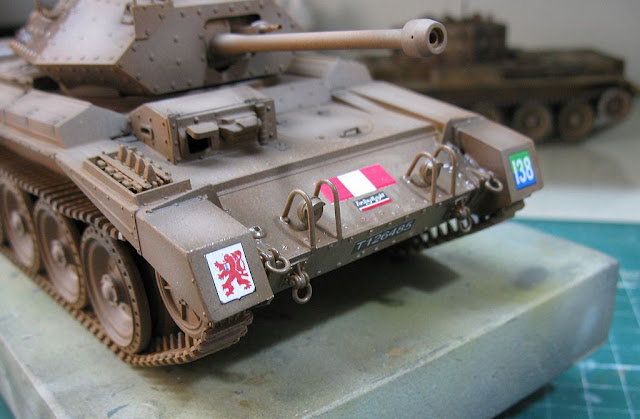 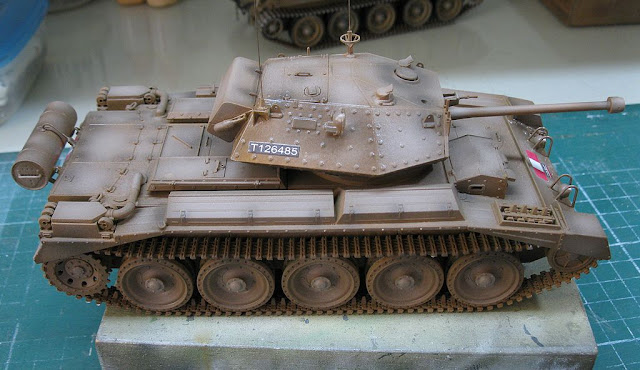 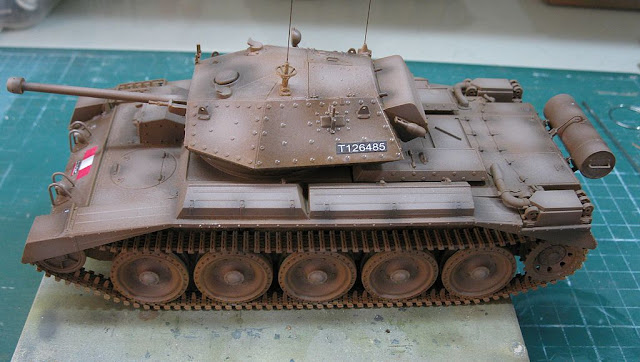 Well...Now is waiting by the night, to dry the decals and Pledge... After that, matt varnish and a light layer of weathering (After all, this girl did not go into combat ...). 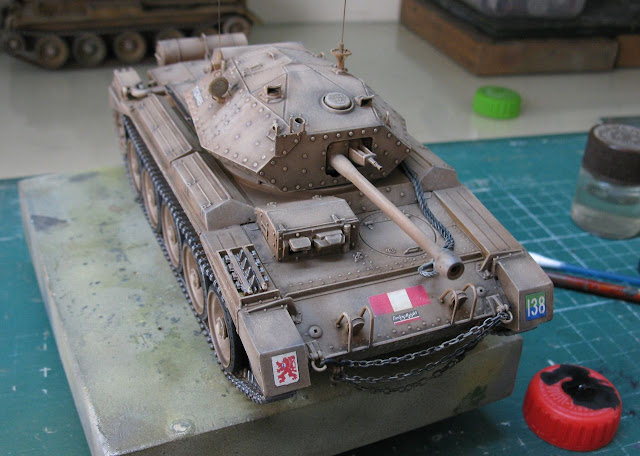 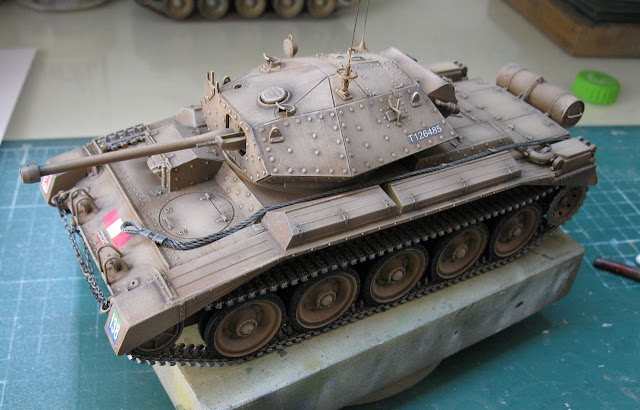 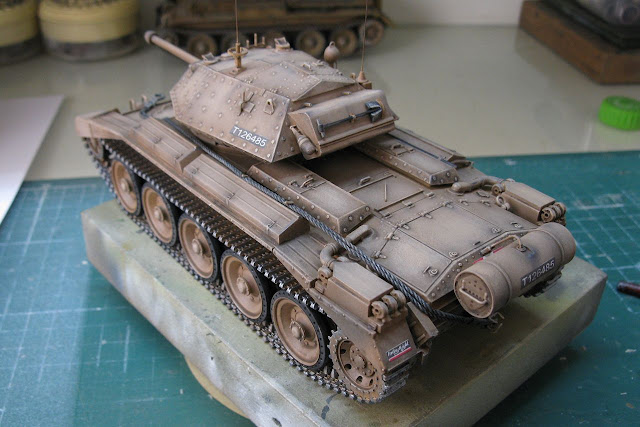 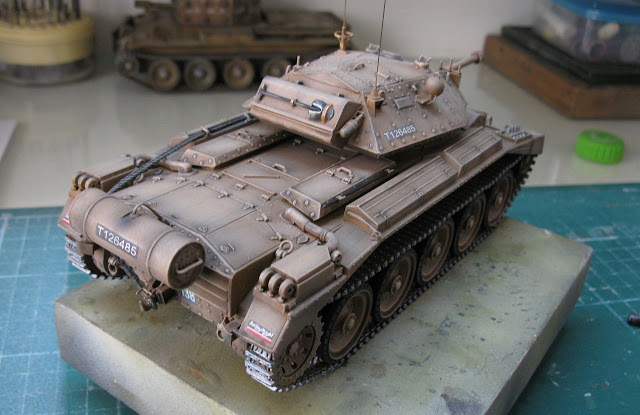 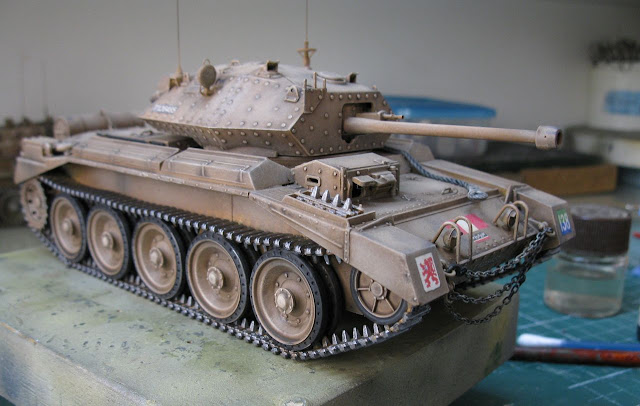 And finally, the Crusader Czech was ready for action: Crusader Mk.III with 6pdr. Mk.5-L/50 gun, belonging to Czech Independent Armoured Brigade, in drills in England, October, 1943. 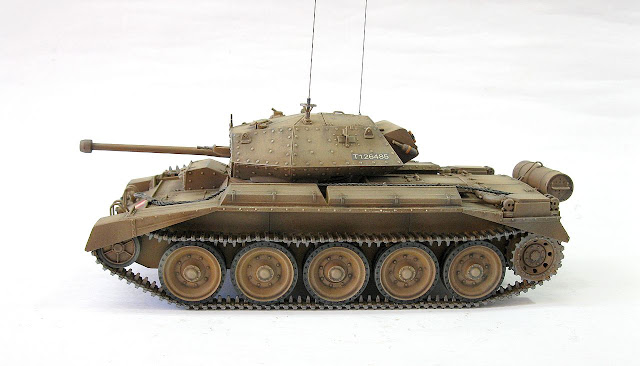 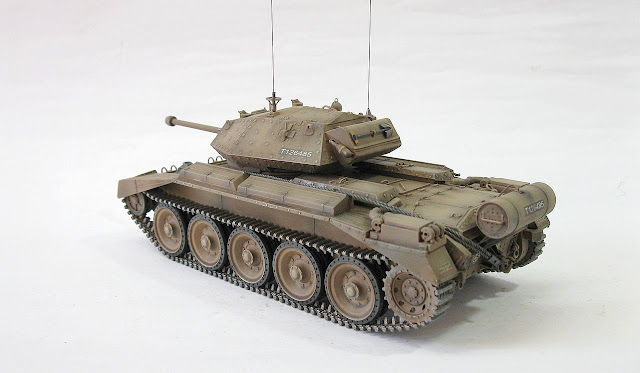 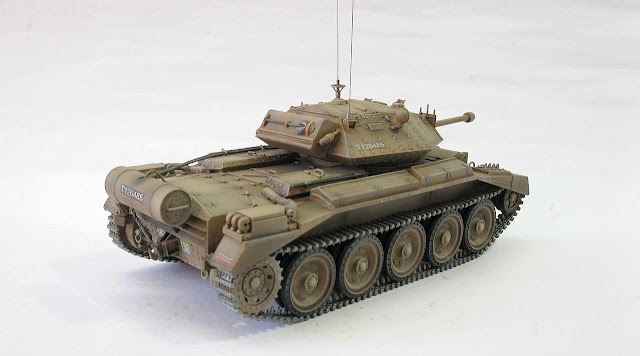 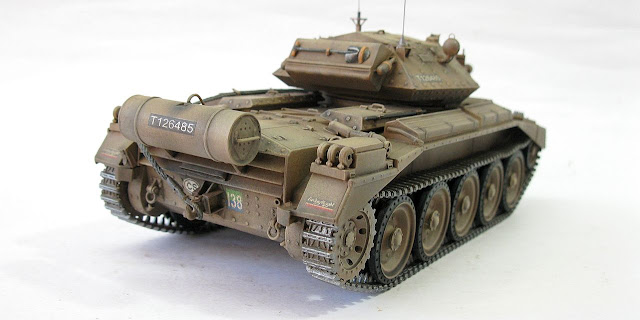 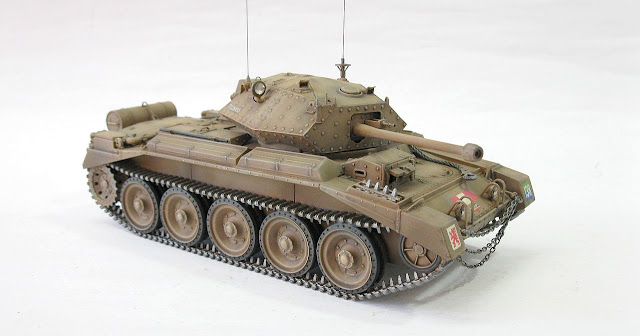 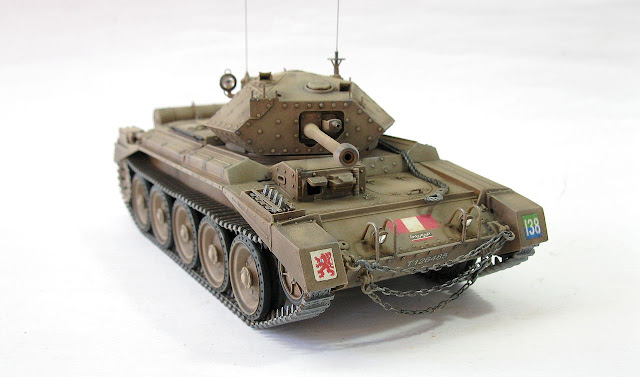 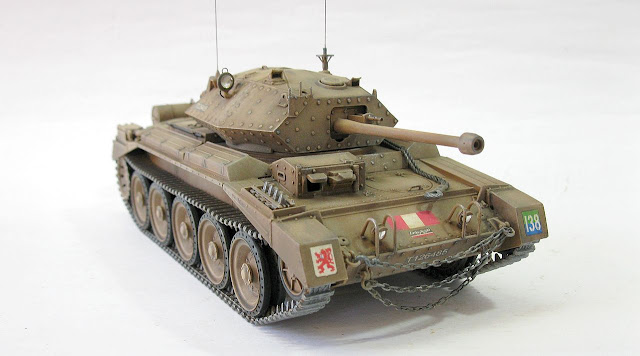 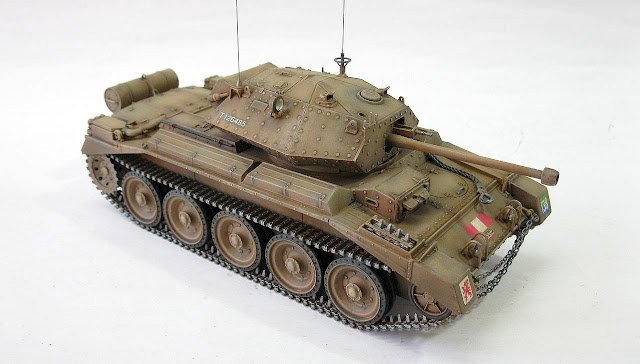 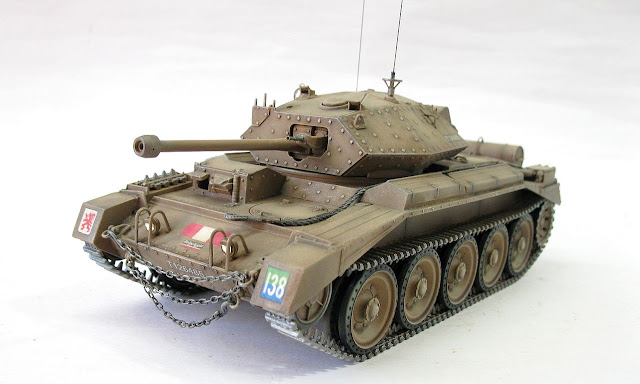 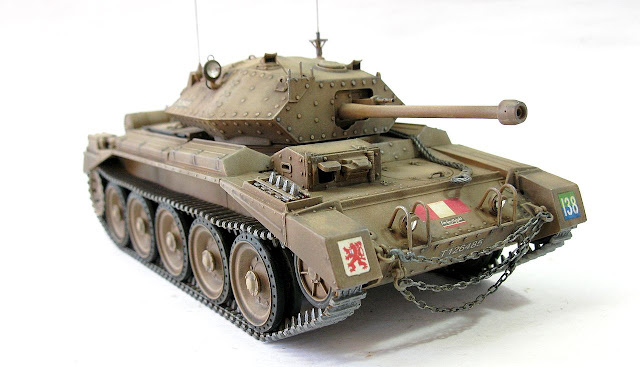