Tankers!!!
Let's build the latest release of Dragon, this monster which only two prototypes were built, a mix of assault gun and tank destroyer, called (rightly) Super Heavy Tank T-28.
History:
The T28 super heavy tank (also called 105 mm Gun Motor Carriage T95) was a prototype heavily armored self-propelled gun designed for the United States Army during World War II. It was originally designed to be used to break through German defenses at the Siegfried Line, and was later considered as a possible participant in an invasion of the Japanese mainland. Sometimes referred to as a super-heavy tank, the T28 was re-designated as the 105 mm Gun Motor Carriage T95 in 1945 and then renamed a super heavy tank in 1946.
The T28/T95 was designed as a counter to the German heavy tanks, such as the Maus. It was also set to be used for attacking the heavy defences expected of the German Siegfried Line.
It was first conceived in the spring of 1945, but proved to be too late to be used in World War II. The original name for the project was to be T28/T95. The Pacific Car and Foundry Company designed it for the final push in Europe, but by the time the first tank was completed and ready for combat, the war was over. The original plans called for five prototype vehicles to be built, and eventually for a total of twenty-five tanks to be constructed.


As it did not have a turret, but a fixed casemate mount instead for its main armament, the T28/T95 more closely resembled a self-propelled gun, and was redesignated as the T95 Gun Motor Carriage in 1945, but in June 1946, the vehicle was redesignated again as Super Heavy Tank T28. It has been argued that it was neither a super-heavy tank nor a self-propelled gun, but that it was in fact a very heavy tank destroyer, more accurately as an American version of one of the German Jagdpanzer-style tank destroyers, intended to take on German heavy tanks.
Two prototypes of the T28 were built. They underwent evaluation at the Aberdeen Proving Grounds and the Fort Knox facilities until 1947. 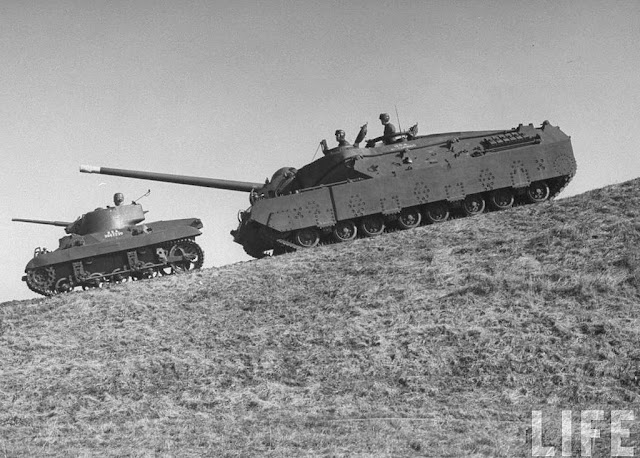 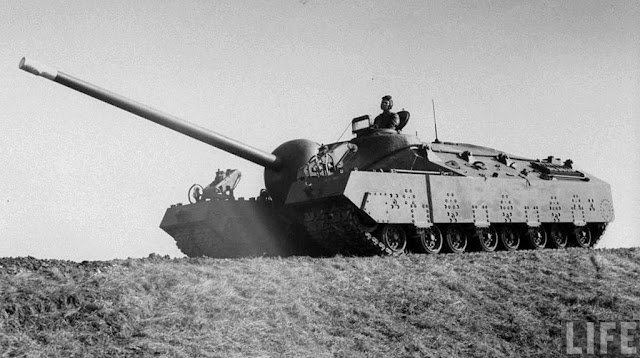 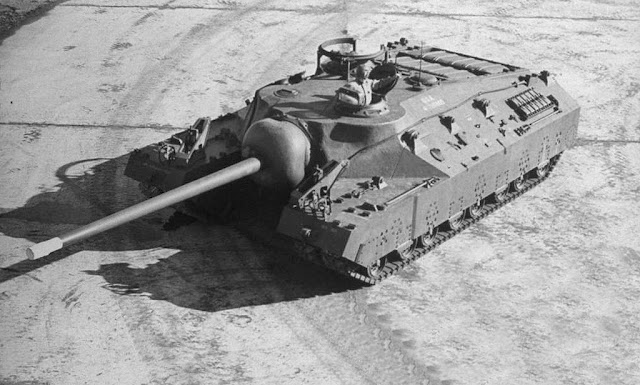 In 1947 one of the T28s was heavily damaged by an engine fire during trials at Yuma Proving Grounds and scrapped, and the other T28 was reported broken up and also sold for scrap. The T28 never went into service. This was because during the later stages of T28 development and evaluation were overtaken by that of the T29 and T30 turreted heavy tank design. The T29 mounted the same gun as the T28 in a conventional rotating turret. The T30 was developed with a larger-caliber gun and more powerful engine. Due to this the T28 program was terminated in October 1947.
In 1974 the last prototype was discovered abandoned in a back field at Fort Belvoir, Virginia. It is unknown where it spent the intervening 27 years. It is the sole remaining example of these tanks and was exhibited at the Patton Museum of Cavalry and Armor in Kentucky. It is currently being prepared for shipment to its new home at Fort Benning, Georgia. 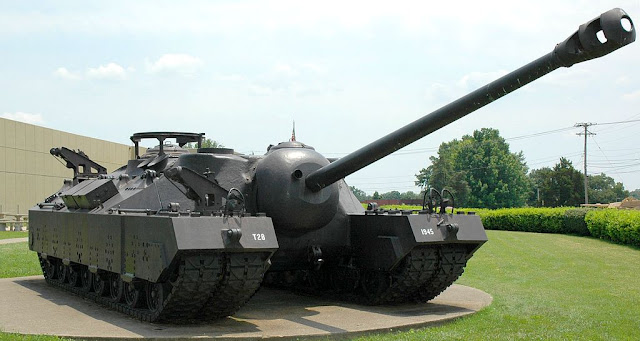 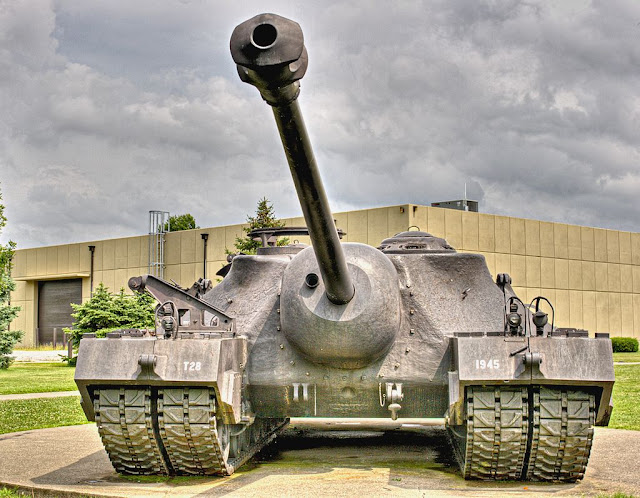 The T28 was designed and manufactured by Pacific Car and Foundry. The mechanical superstructure was taken from a T23. The original plan was to build five prototype vehicles, with a production total of 25. Its total weight when fully equipped would have reached 95 short tons (86 tonnes). To carry this weight, it used four tracks instead of two, each 12.9 inches (328 mm) wide. The outer tracks could be detached for easier transport. After removal they could be fixed together to make a unit that could be towed behind the tank.


Due to its extreme weight and low engine power, the T28 had extremely limited obstacle-crossing ability and could not cross any of the portable bridges available at the time, and so was considered impractical in the field and not suitable for production.
The T28 had no conventional turret, with a casemate style hull instead, giving it a comparatively low profile. Its main armament was a 105 mm T5E1 gun, in a ball-shaped gun mantlet set into the hull front. Although it was technically a part of a gun mantlet it was really attached to the hull. Due to this it was not a true tank at all, but a "Gun Motor Carriage". The traverse was limited to 10° right and 11° left, and elevation from 19.5° to −5°.

When traveling, the gun was locked at the maximum elevation. It also had a .50 inch (12.7 mm) M2 Browning machine gun mounted above the commander's hatch. The main gun had a muzzle velocity of 3,700 feet per second (1,130 m/s), with a range of up to 12 miles (19 km).
The armor was very thick compared to other tanks of the time, up to 12 inches (300 mm) thick on the front. This was considered heavy enough to provide protection from the German 88mm gun used as tank gun and anti-tank guns. The lower hull front had 5.25 in (130 mm) of armor, and the sides 2.5 in (64 mm). The suspension system and lower hull were covered with 4-in (100 mm) thick steel skirts. The engine was a gasoline-powered Ford GAF V-8, delivering 500 hp, which left the vehicle underpowered with a top speed of about 8 mph (13 km/h) and greatly limited its obstacle-climbing capability.

Comparison with other countries' designs 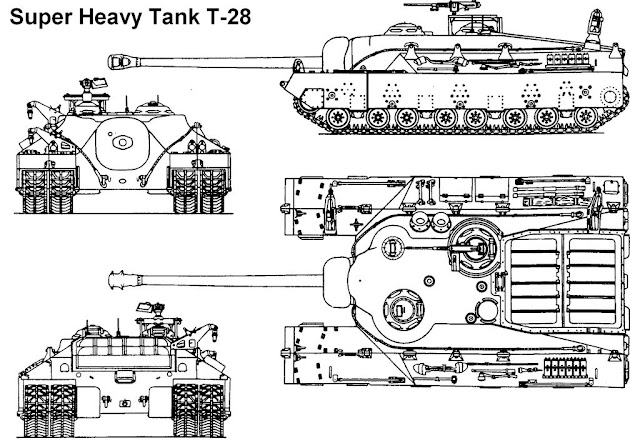 The parts are in plastic bags, in a huge cardboard box (270 x 420 x 95mm) with an atractive cover box art. In the interior, lots of plastic parts, a booklet instructions, photo-etched sheet (2), decal, steel springs for the bogies, metal towing cable, 8 DS tracks and transparencies for cupola visors...

Let´s start for the beginning... Dragon opted to build each wheel with a tread separated. Each bogie has 4 wheels ... And the vehicle has 16 bogies: 16x4 = 64 treads to remove the mark injection. To save time, I adapted each tread on a Dremel (like a mini-lathe), using the injection pin of the part. The burr removal with a scalpel it's much faster and easier!! 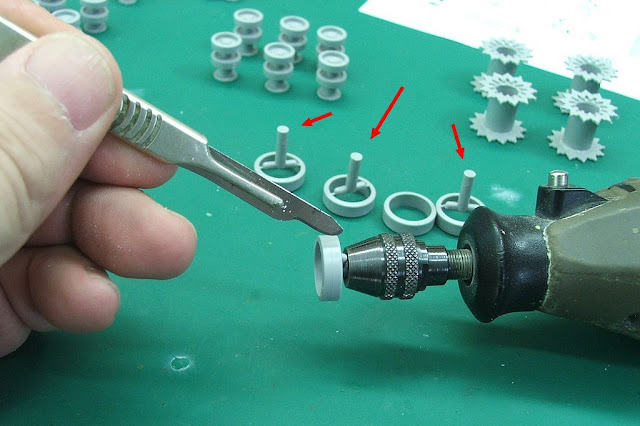 After rectification of tread, it is time to cut the injection pins ...
And removing the burrs of this surgery with Dremel's fine emery 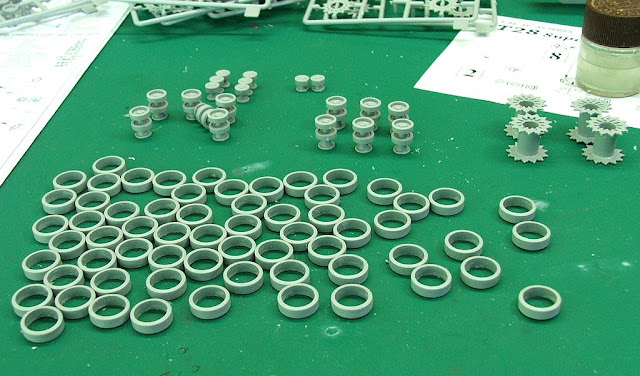 I spent a lot of time cleaning and preparing all suspension components.  It's really the most boring part of building ... The tank looks like a centipede!!!
After gluing the arms of the shock absorbers (photo-etched), I installed the external tread. Note the alignment of the bogies. The upper-hull is in dry-run.
And with the sets of the external tracks (another dry-run)... 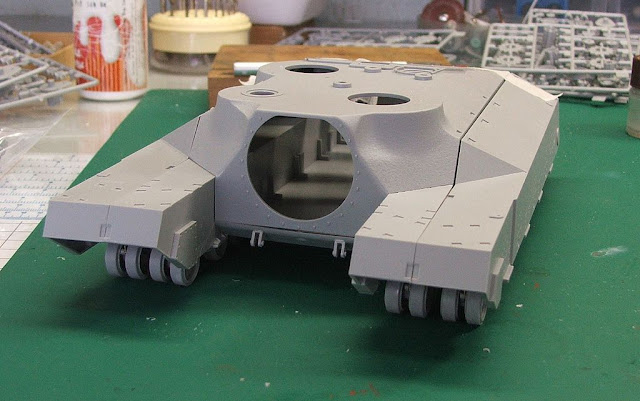 These are the photos of the job in this weekend. I installed the main armament. I had to immobilize the gun, because the weight of the metal was excessive for the system to be able to stay mobile.
Now, a real nightmare: build the 3897 little pieces that make up the teeth of the tracks .... Oh Gods!!! And are four tracks!!
The teeth in place... 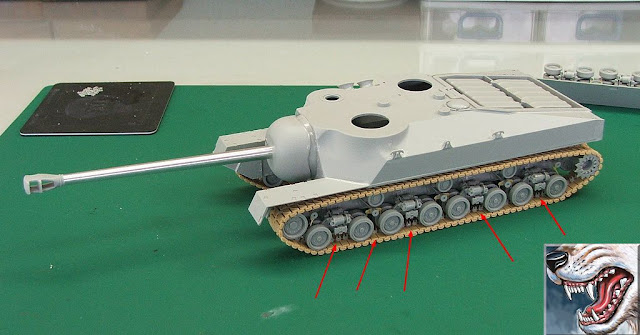 And the monster with shoes:

I decided to scratch the two pulleys of the small winches, that are missing. Interestingly, these pulleys are shown in box art but not part of the kit.

Another interesting flaw in the kit: the manual does not mention installing the tow hook, but the kit presents this piece as "not useable."
The T-28 does not have a hull machine gun against infantry attacks (an error that Ferdinands have paid dearly in Kursk). Displays only a .50 in a fully exposed arc on the commander's hatch. Since we are in the field of prototypes, I added a secondary machine gun (.30) in front of the gunner's cupola. 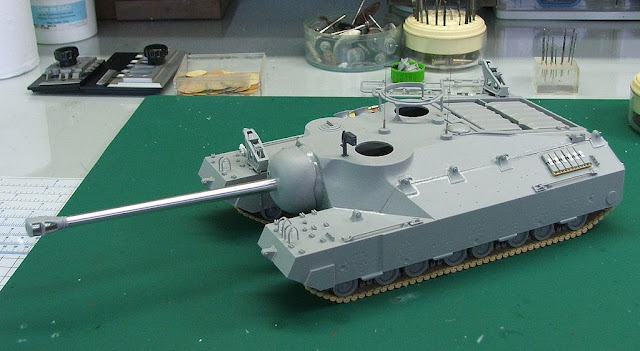 I could not resist and photographed the T-28 in the company of two more huge girls .... 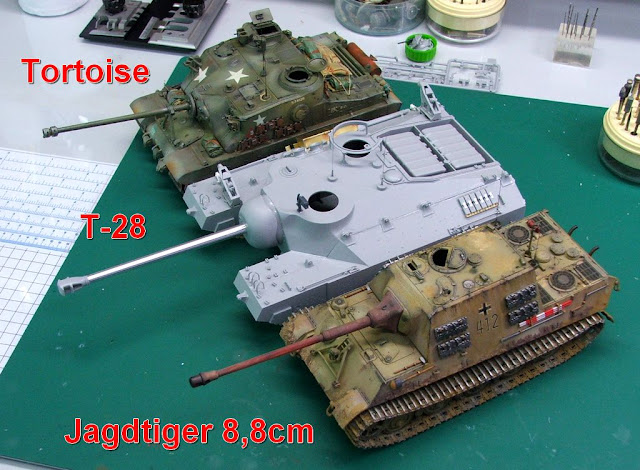 A little advance...The steel cables, the cables in the pulleys and etc...
The hooks of steel cables by RB Models:
Painting:

And a layer of Future, to prevent silvering! 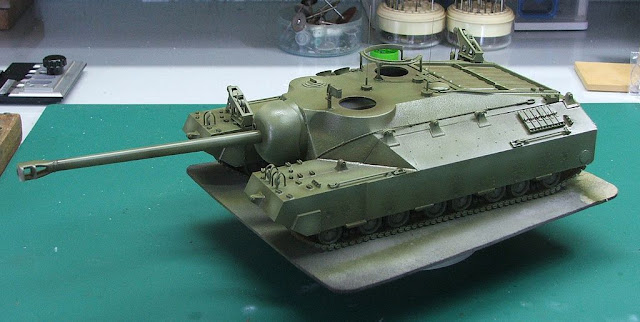 Decals in place and painting the tracks... 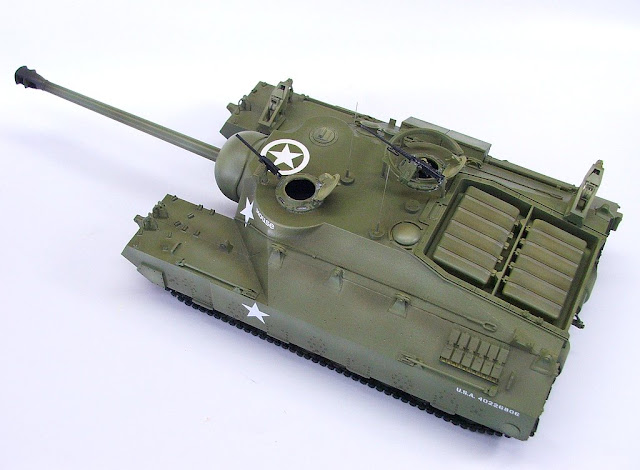 Next stage weathering....
Well, Gents... The girl is done.  The all project was swift and smooth. i really liked this monster. See the pics below:
And the T28 Super Heavy tank "Mouse" is ready. 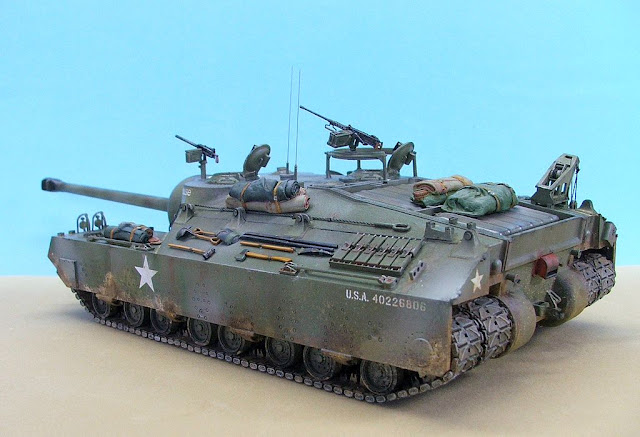 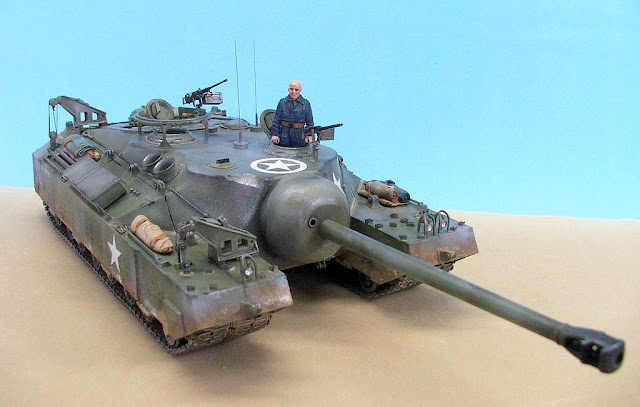 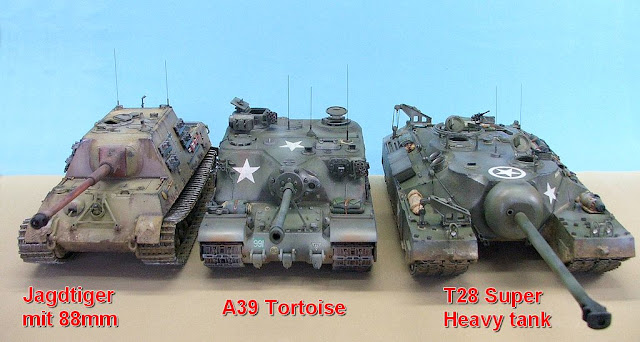 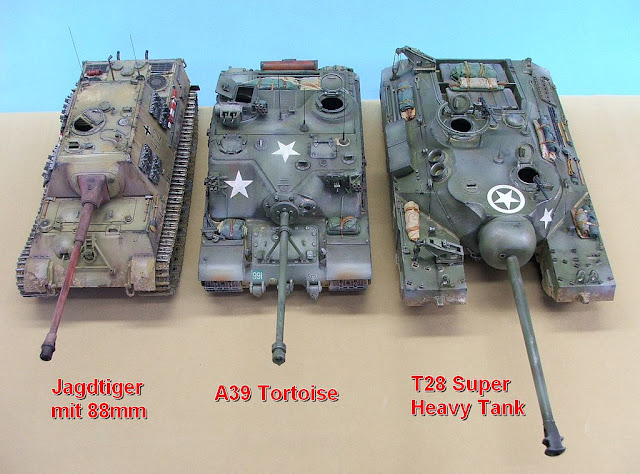 I hope you enjoyed it ....  I loved building this monstrosity and I recommend without reservation.  Pretty much in any collection!!