Today lets know one of the prototypes that originated the fast and deadly British Tank Cruiser A27 Cromwell. Let me introduce to you the A23 Vauxhall prototype Cromwell II. 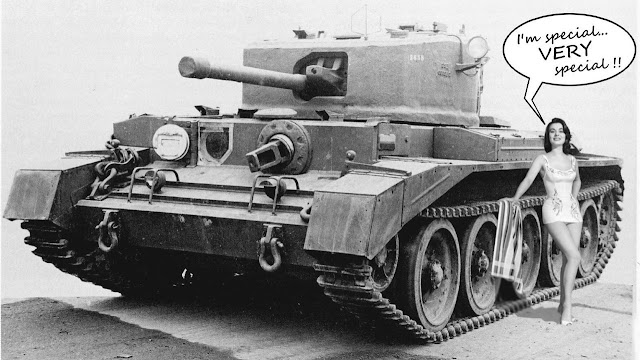 History:
The Cromwell tank, officially Tank, Cruiser, Mk VIII, Cromwell (A27M), was one of the series of cruiser tanks fielded by Britain in the Second World War (see more about Cromwell cruiser tan, in this Bunker's post...).
Named after the English Civil War leader Oliver Cromwell, the cruiser tank Cromwell was the first tank put into service by the British to combine high speed from a powerful and reliable engine, the Rolls-Royce Meteor with a reasonable armour. The intended dual-purpose high velocity gun could not be fitted in the turret and the medium velocity dual purpose gun fitted proved inadequate. An improved version with a high velocity gun became the Comet A34 cruiser tank.
The development of the Cromwell and Centaur dates to 1940, as the Crusader tank was being readied for service. The General Staff was aware that the Crusader would become obsolete, and in late 1940 they set out the specifications for a replacement tank, expected to enter service in 1942, fitted with the QF 6 pounder gun. In 1943 Churchill production was scheduled to end and Vauxhall who had been building Churchills until then and were  to build Cromwells, in the future.
In the end of 1942, Vauxhall built the A23 cruiser tank prototype Cromwell II, a scaled down version of their A22 Churchill infantry tank, armed with Ordnance QF rifled 57mm, 6-pdr Mark III (43 caliber), the first version designed for use in tanks.

It was mounted co-axially with a 7.92mm BESA air-cooled machine gun and a sighting telescope (No 39 Mk IS) on the left.. This would had 75mm of frontal armour, used a 12-cylinder Bedford engine, carried a crew of five and would had the cast/welded turret like A22 Churchill design in the Cromwell hull. Vauxhall completed them with this new composite turret featuring cast sides and a welded roof, but the resulting Cromwell II never went into production. The Churchills proved very successful in Tunisia... so, production was to continue and Vauxhall would build no more Cromwells.
In Vauxhall, the prototype Churchill turret would be slightly modified and would become the turret of the Churchill VII. And it's exactly this prototype that we will try to reproduce in a 1/35 scale. But first, see a true Churchill in a top of a Cromwell!!
Specs: 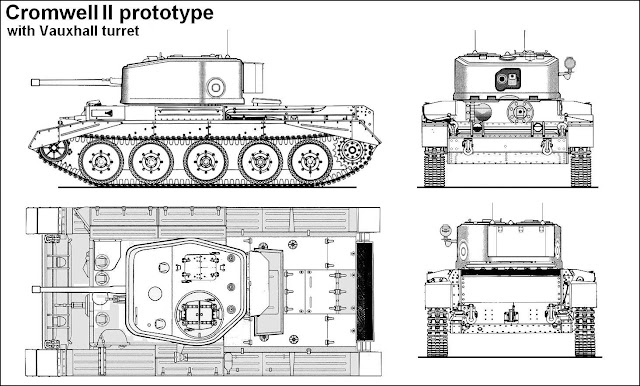 For this project, I'll use the old Centaur hull, from Tamiya, that had been left over from an old project that I used the turret, in the Matilda II 6pdr.. As the Law on the Conservation of Modeling Matters says: "In scale models, nothing is lost, everything is transformed ..."
And some spare parts from my Churchill collection, in special, roof turrets from Churchill Mk III, when I retrofitted some tanks from the MkIII model to the Churchill Mk I and II models and a complete turret Mk VII Tamiya, from my Churchill 3 inch 20 CWT gun carrier project. As you can see, it is always useful to have a nice box of spare parts close by ...

But enough with the ramblings and let's go to the fight: here is a photo with some more visible changes that I will have to make in my kit:
First of all, the turret: my old Churchill Mk VII was in very bad shape. I removed the original mantel and installed a Mk.III mantel from my spare parts box. As the gunner's hatch was angled on the Churchill Mk.VII and in the Vauxhall prototype it is aligned with the long axis of the turret,
I found it easier to change the entire turret roof than to graft the hatch. Something like this:


This girl will not be the exact reproduction of the existing photo, but will follow the painting pattern, non-operational and with discreet markings.
Green as color-base and Archer casting markings decals. I use an application pattern for these decals that is a little different from what Archer recommends: I apply the base color without its tonal variations ... then, I apply gloss varnish or Future (Pledge) to avoid silvering. After drying the casting decal and sealing it with varnish / Pledge, I make one last application of base color and make the tonal variations. This makes the thickness of the paint layer over decal thinner, the casting marks clearer and the decal film is completely invisible.

Oh my God!!
I was forgetting to make the structural reinforcement crease on the outer side of the front fenders!

Time to put the tracks on... The tracks are very well made, although they are made in vinyl. The thing is to simulate the trim and weight of the links on the wheels. I will use the glue technique with cyanoacrylate (superglue), since this vinyl perfectly accepts this glue ...

And the rare girl was finally ready !! Here is the prototype of the Cromwell II with Vauxhall turret - A23 cruiser tank prototype: 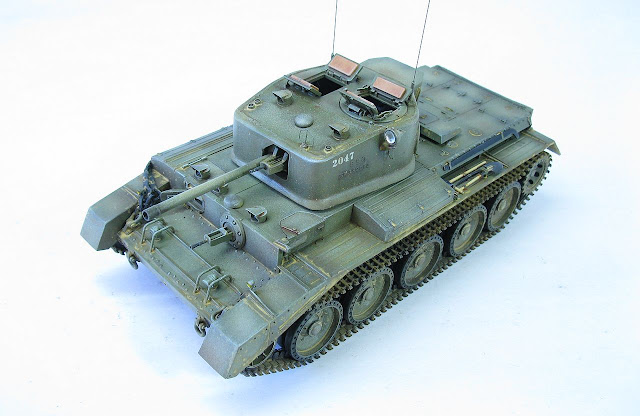 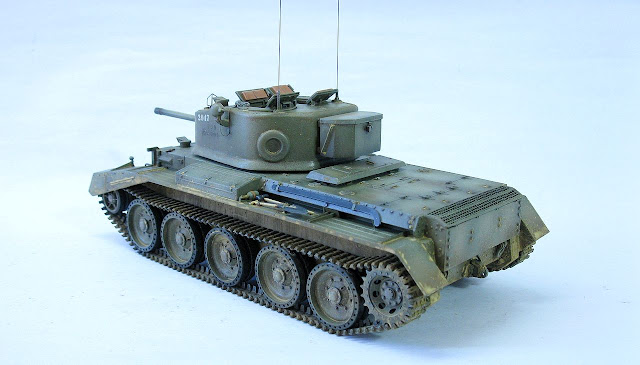 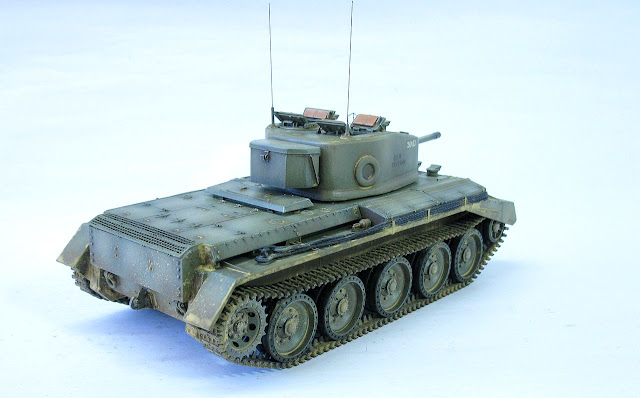 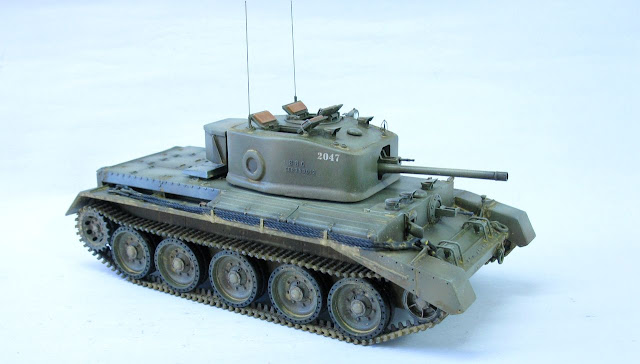 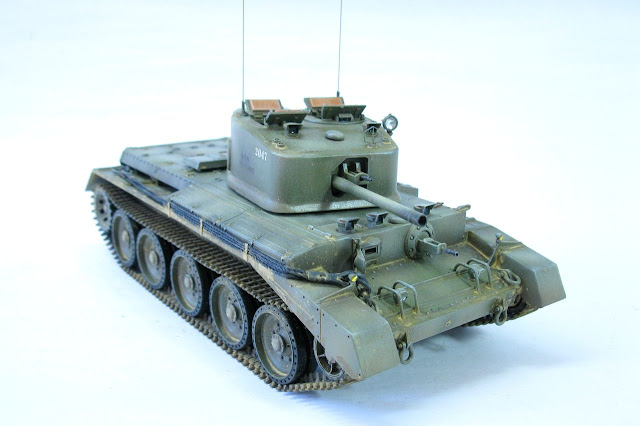 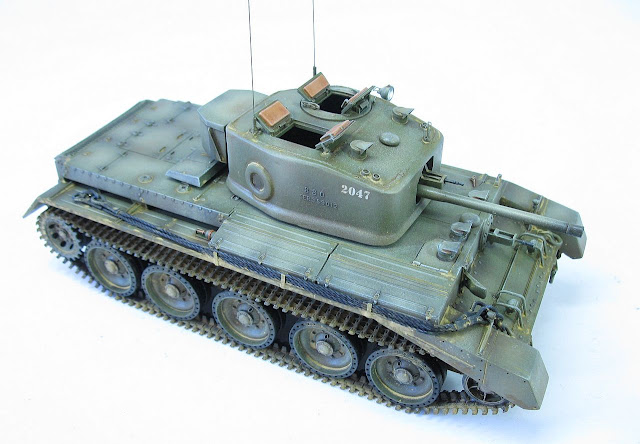 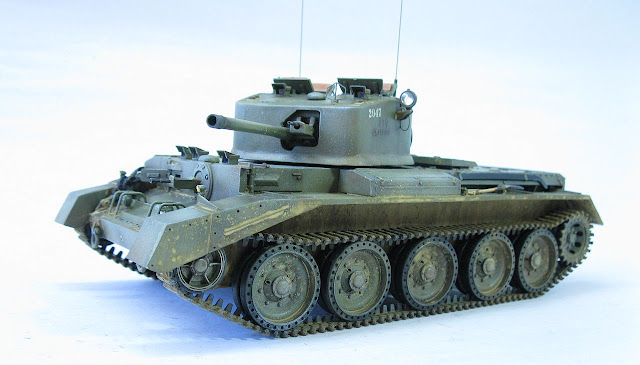 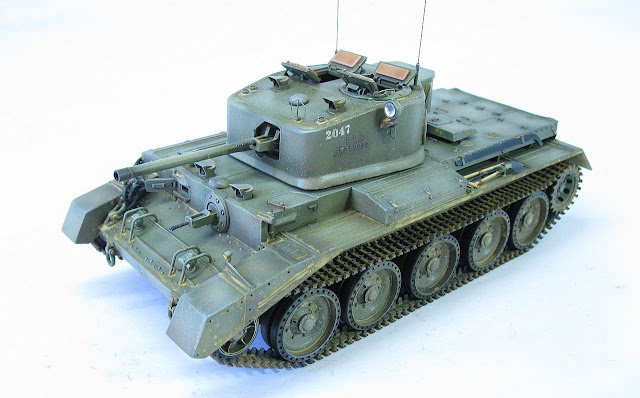