Lads !!!
Let's see a quick and different building: Beaverettes Mk I and II. When I built my Beaverette Mk III, I really enjoyed the kit and the final result. So I ordered to IMACO two kits of Beaverette Mk I / II (to build versions Mk I and Mk II) and one kit Beaverette Mk III AA version, with Boulton-Paul Defiant turret.
This post will cover the building of the two first versions of Beaveretes, the Mk I and II.
History: (see more details, here)
Since we had seen before, the first Beaverettes (also called "Beaver bug" or "Mosquito car") were the most crude in design. The 12Hp chassis was fitted with a 14Hp engine , to propel the predicted weight of the machine, which was fitted with a steel plate body of, shall we say, angular proportions. The Mark I is said to have carried oak planks to the rear extension for the armour did not reach that far back.
Clearly Standard had a number of front wings also left over so these were the only consideration made to what might be called "styling".  The Mark II was steel plated to the rear extension as well, that being the only substantial difference.
A Bren .303 machine gun was the usual fitting and some carried a wireless set. The anti-tank rifle .55 Boys also maybe carried.
The driver and gunner sat in an open cockpit, the driver having a horizontal slot to view the road and the gunner a vertical slot to fire out of.
Some shots show a third crew member, though he appears to have no seat and stands behind the driver with the appearance of waiting to be shot! 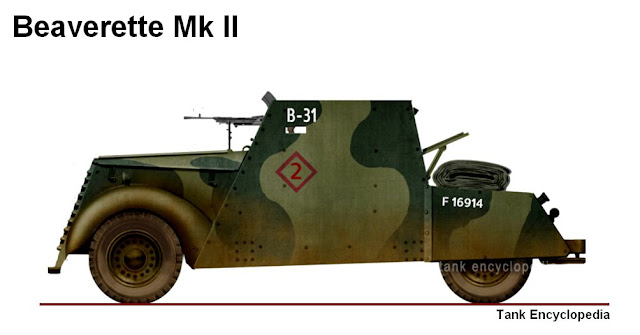 The kits:
As the Beaverette Mk III, I used two IMACO Beavarettes Mk I/ Mk II model kits in resin (IMA 01835). The kits comes packaged in an rigid plastic box, packed in styrofoam and bubbles-plastic. When I bought the two Mk I / II, also bought the Mk III AA with quadruple turret from Boulton-Paul Defiant two seater fighter.
The resin and plastic parts:

I've had good and bad news when I open the box of Beaverette Mk II AA: The good news is that IMACO made ​​a great up-grade in the Mk III kit , with interior details. This made ​​me very excited. But the bad news came next:  were missing the two rear petals of the MkIII's turret in my kit:
Oh, Man...I was extremely frustrated because I was eager to start building this particular model (you guys know I love rare and strange things ...) This armored car with a quadruple turret just messed with my imagination ...I had even bought the four .303 Brownings in RBModels (the kit comes without the gun barrels). Immediately wrote an e-mail to IMACO and was promptly answered by Mr. Russel Wilson (the quickness of the response was overwhelming ...)  who sent me the missing piece. I am awaiting the arrival of the missing parts,  by now. To save time, I'll just build the two girls Mk I and Mk II. let's go !!! 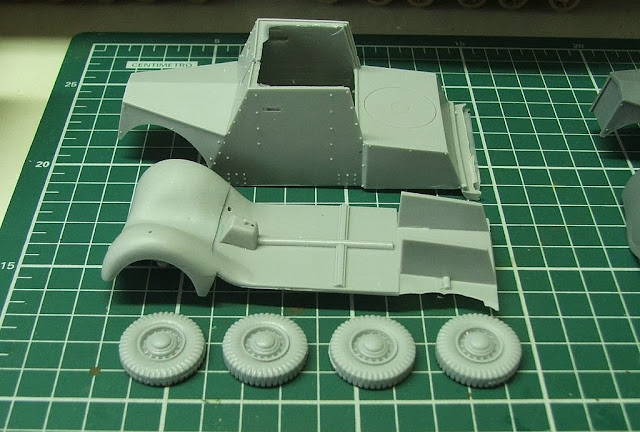 And more bad news: more missing pieces. I was really unlucky with these 03 kits. One week after writing to Russell (and he had already sent the missing part...), I found the lack of several small parts in both kits Mk I and II
Bloody hell ...The solution is scratch the parts ...

But not over yet ... Packers forgot two headlights ...Am I or am not a lucky guy??
Thankfully I have a few pieces of Formations ...
After these scares, we will continue to build. I noticed that the rear armor of Mk II comes wrong in the kit. It should be divided and not whole, as in the kit.
But it was easy to fix: was just cut and add some details in plastic (Plastruct):
Adding details...

In my research, I found (very few.. ) photos of Mk I : with plain sides and "wrinkles" on the side and in the armour front:
I decided to make my model with wrinkles, to differentiate more than the model Mk II 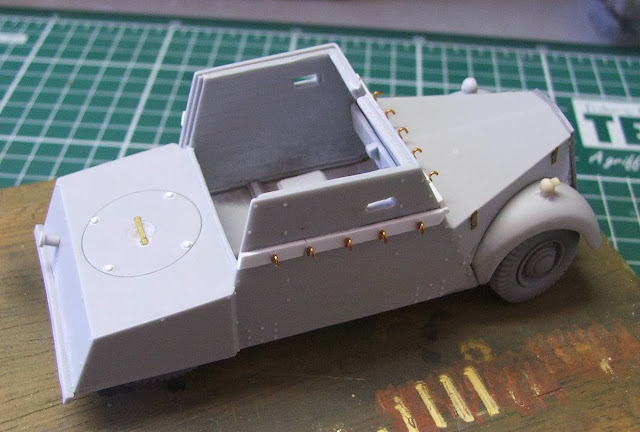 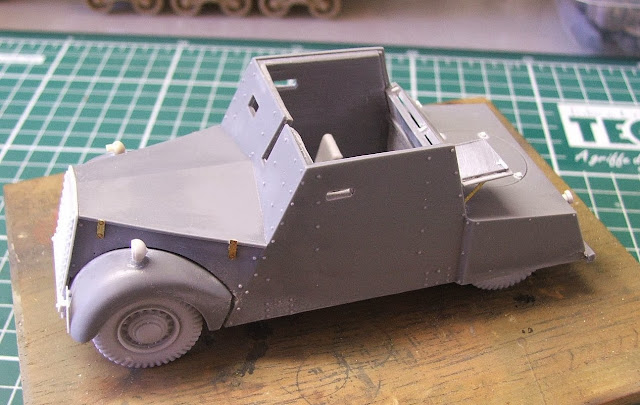 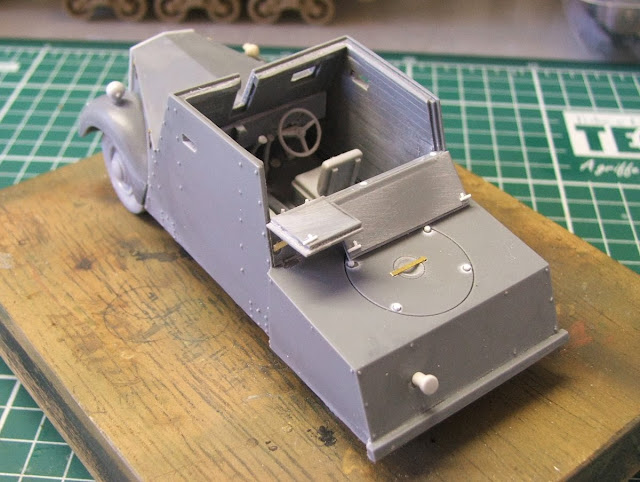 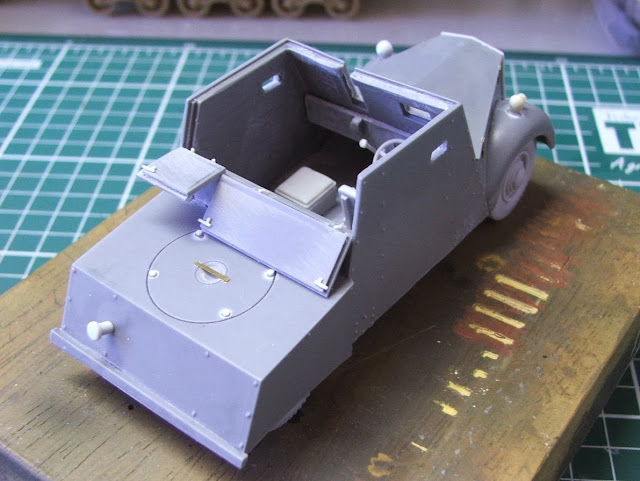 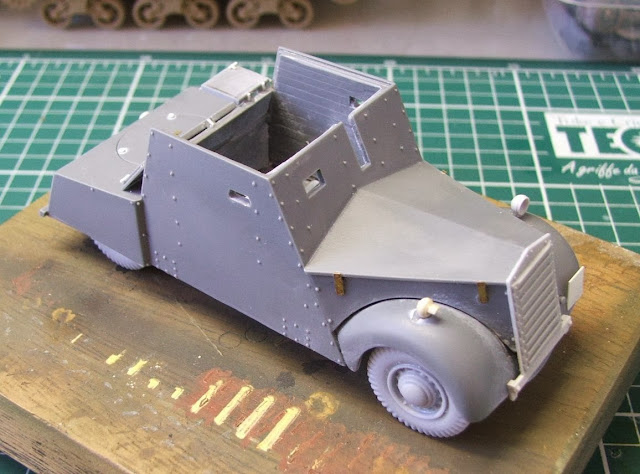 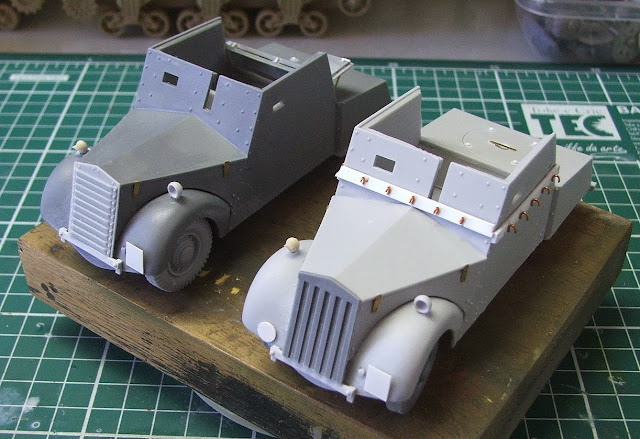 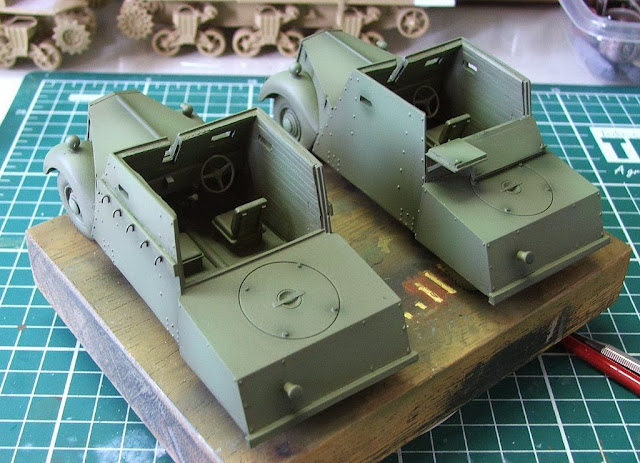 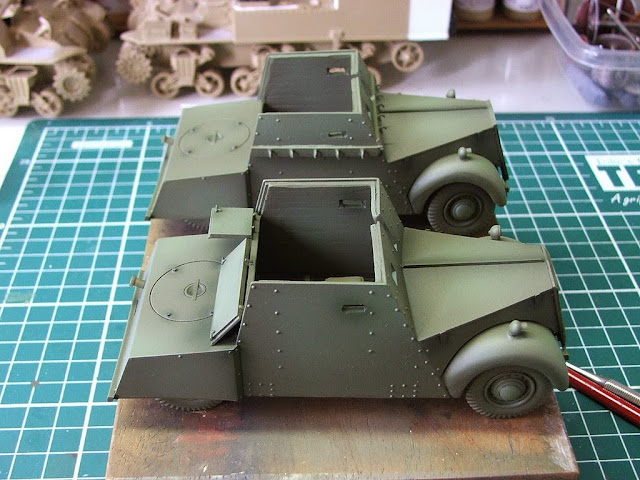 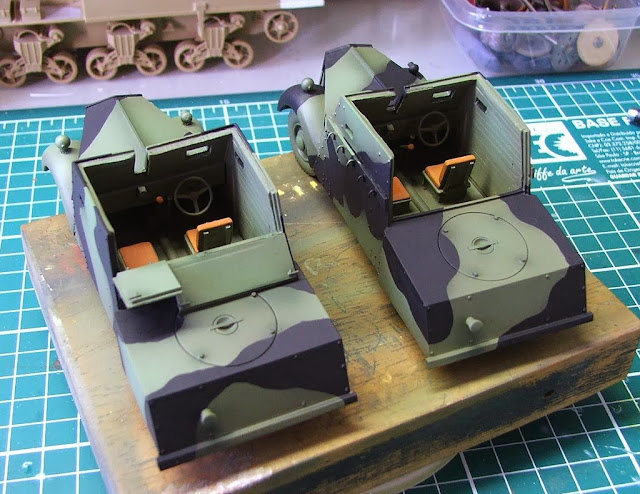 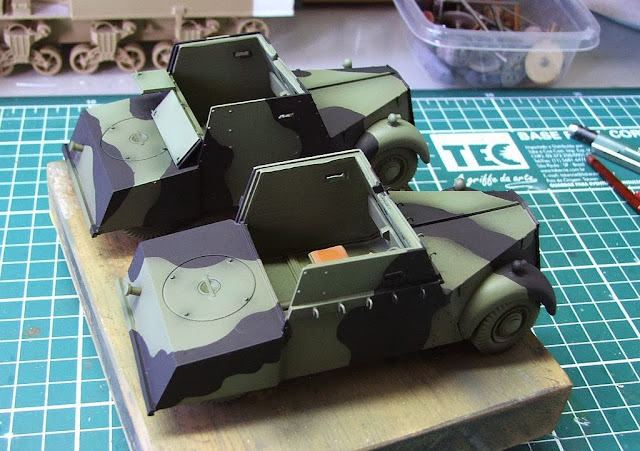 I used generic markings for my girls...Decals from my spare box and laserjet. Notice the glossy aspect (Future) to prevent silvering. I use airbrush to apply the Future ... 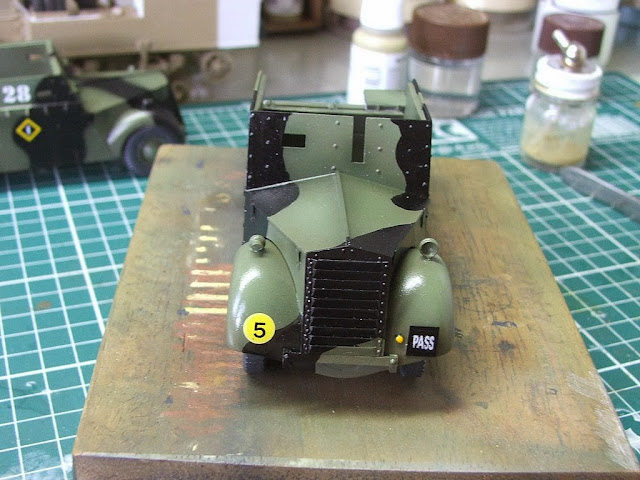 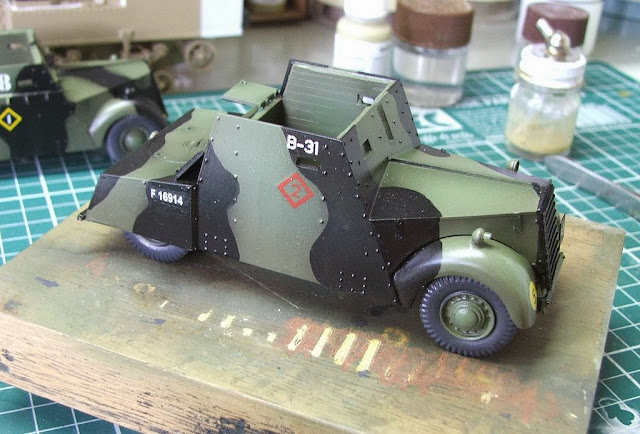 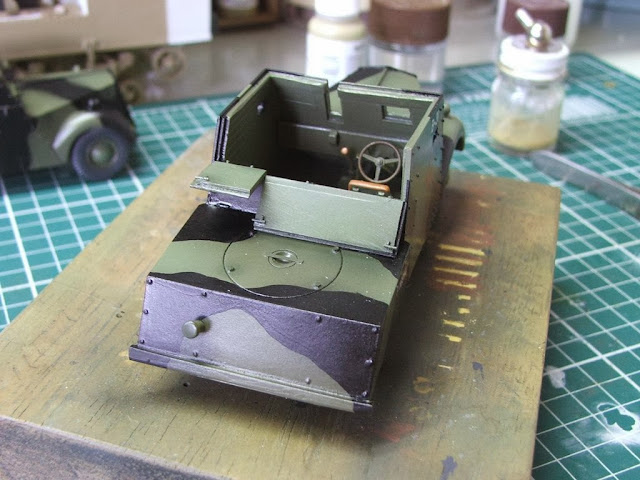 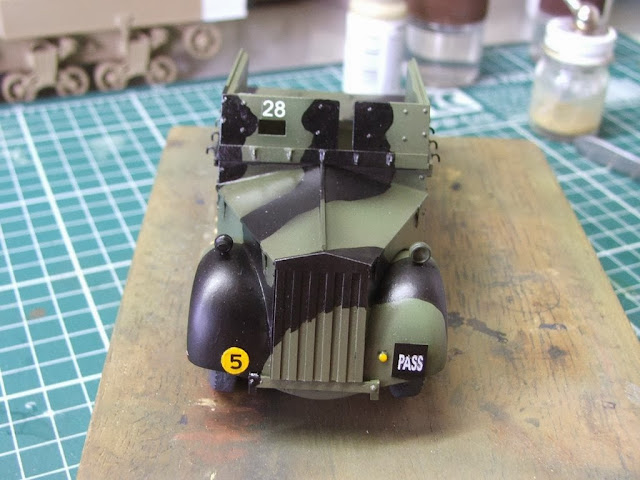 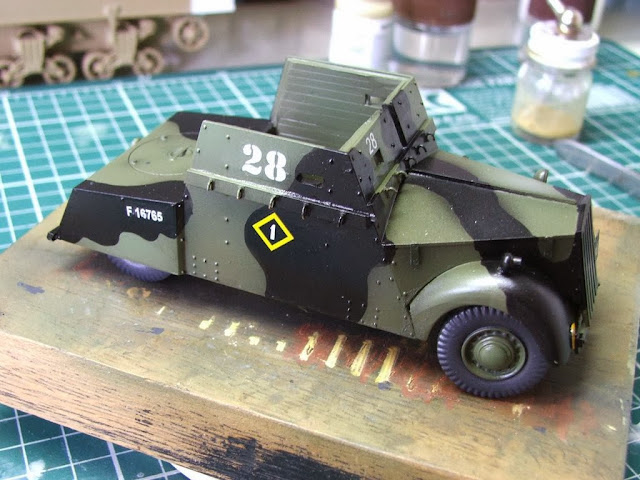 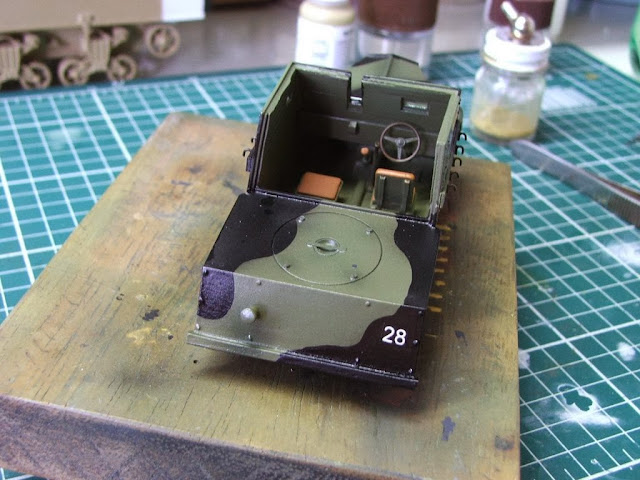 While the Future dry, we will use details in resin from Value Gear. Excellent stuff... 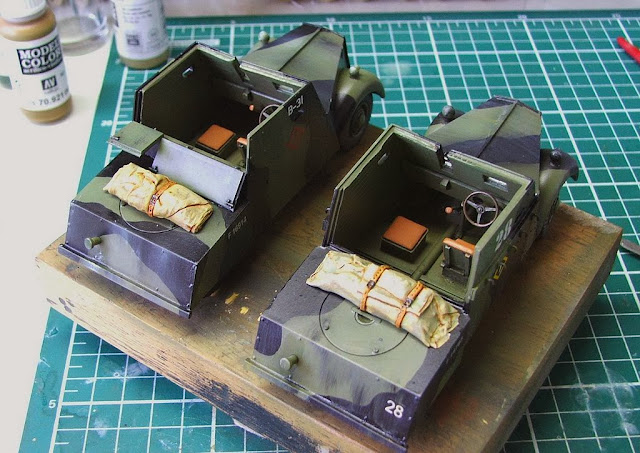 And the Girls was ready:  First, the Beaverette Mk I 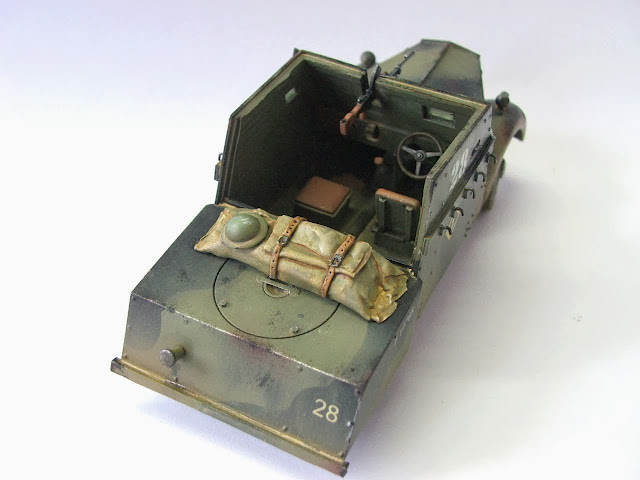 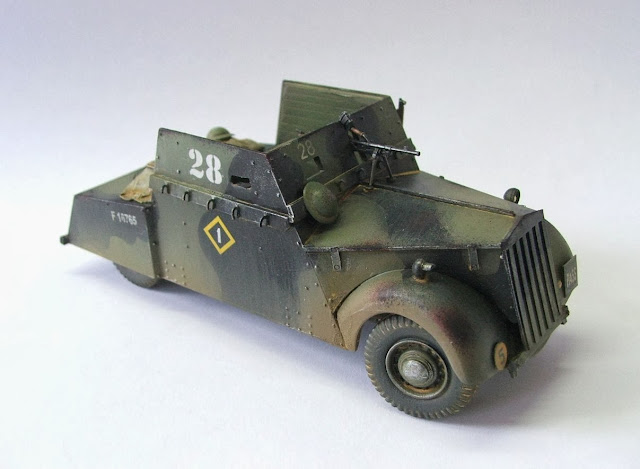 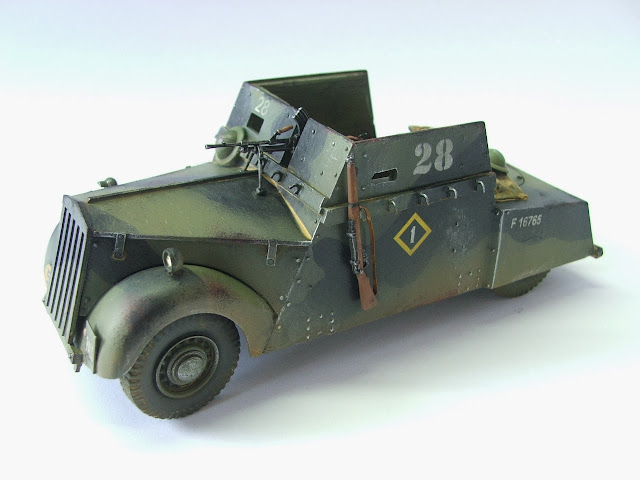 Before showing the final pictures of Mk II, I will show you guys a different detail I found in a real photo: 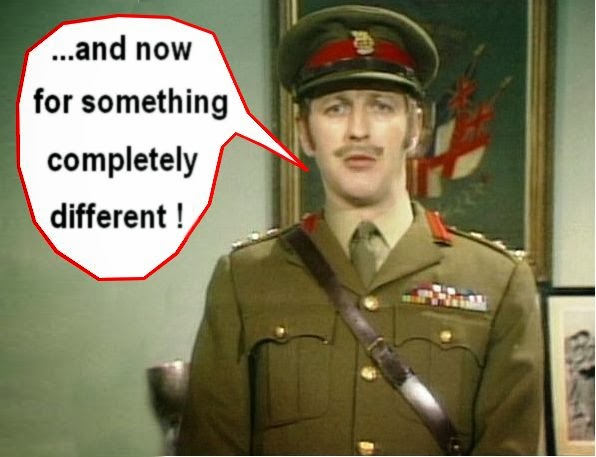 Two British helmets attached on the hood of the vehicle. I liked the detail...
So, I decided to put the helmets in my Beaverette Mk II, too. 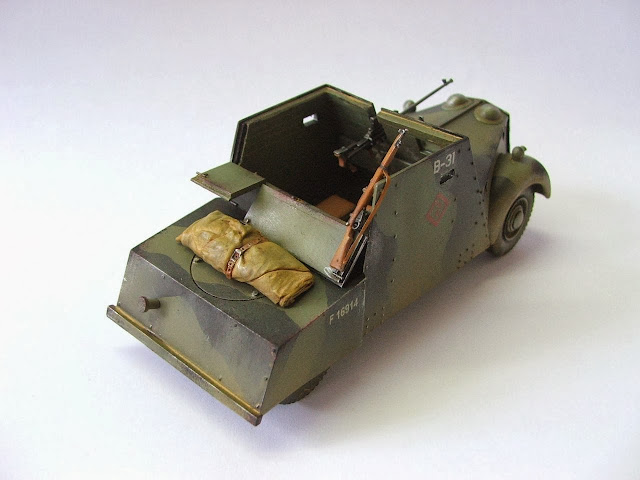 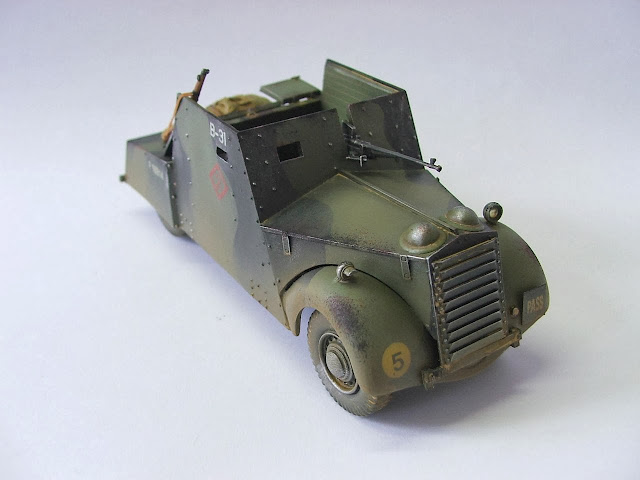 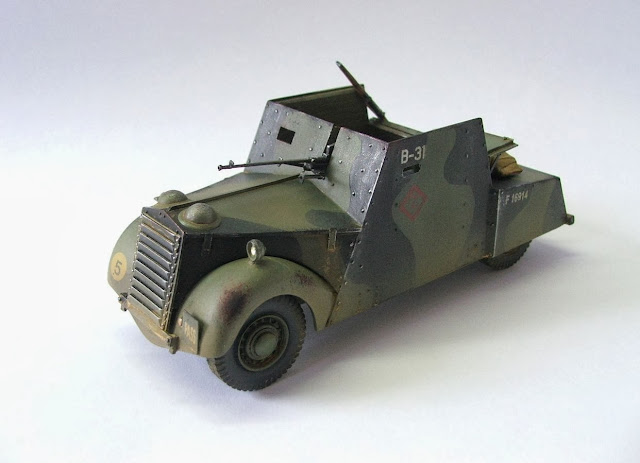 The two Beaverettes, side by side: 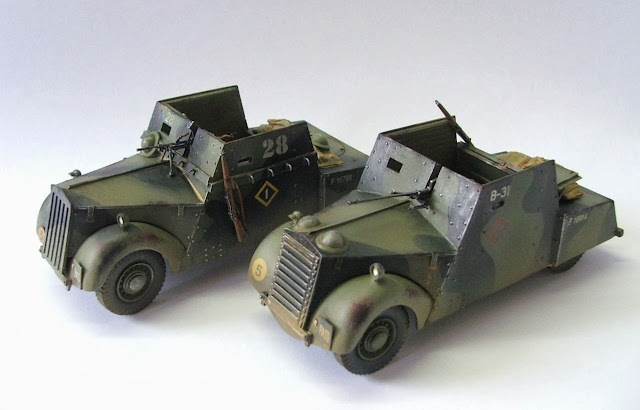 And with the bigger sister Beaverette Mk III, for size comparison: 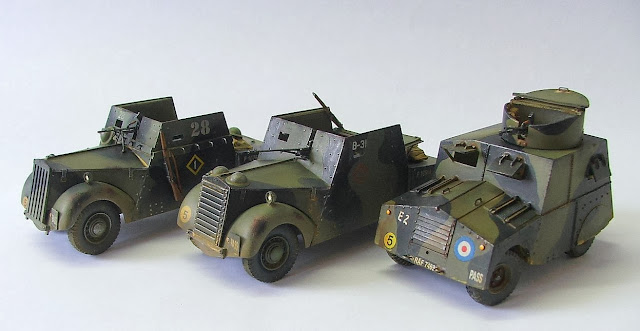 Thanks for following, Tankers.