Gentlemen!!!
Difficult situations generate ingenious solutions ... and most of the time, simple and effective. And it is precisely one of these examples that we will see here today: let's meet a pioneer: Now let's get to know our "not-so-holiness" Kangaroo Armoured Personal Carrier - The "Defrocked Priest". 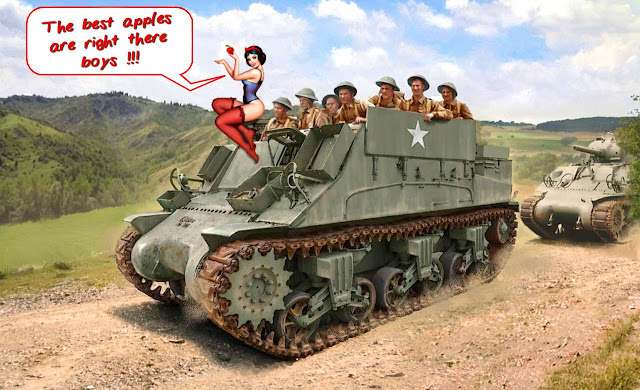 History:
Priest Kangaroo was a Canadian armoured personnel carrier (APC) developed during the Second World War, by the conversion of an AFV chassis. Created as an expedient measure by the Canadian Army, Kangaroos were so successful that they were soon being used by British and Commonwealth forces.
Their ability to maneuver in the field with the tanks was a major advantage over earlier designs, and led to the dedicated APC designs that were introduced by almost all armies immediately after the war. In July 1944, Lieutenant-General Harry Crerar's First Canadian Army was concerned by manpower shortages due to combat losses.
While the British and Canadian forces had received some American M3 Half-track APCs, the supply was heavily reduced by this point due to the Americans' own need for them, and Universal Carriers were individually insufficient despite the enormous numbers.
However, self-propelled artillery guns and tanks were currently oversupplied, with a significant number sitting idle not being used. Lieutenant-General Guy Simonds, commander of II Canadian Corps, devised Kangaroos as a field-expedient alternative to purpose-built APCs.
The original Kangaroos were converted from 72 M7 Priest self-propelled guns of three field artillery regiments of the 3rd Canadian Infantry Division.
The Priests were "defrocked", removing their 105mm guns and ammunition stowage to increase the maximum space inside the vehicle, but the .50 Browning MG and his ring was kept.

The vast majority of texts quote that one of the hallmarks of the transformation of Priest into Kangaroo was the installation of additional side armor plates, like the drawing below:
But researching the subject, I came across Kangaroos without the side plates, such as those used in Italy, in 1945.
The early Kangaroos, used in Operation Totalize by the Canadians and British, featured these additional side plates ... and this was quoted as a typical addition to this transformation.
But upon further research, I realized that the Priests of the Canadian 3rd Infantry Division had this additional side armor plate BEFORE being converted to Kangaroos.
This explains why there are Kangaroos with and without additional armor plates: these plates were not a product of conversion. Only the front plate, which sealed the opening for the 105mm howitzer barrel

When the three Field Regiments of Canadian Artillery ( the 12tth, 13th and 14th Regiments)  of 3rd Canadian Infantry Division was re-equipped with towed 25 pounder guns in late July, their self-propelled tracked vehicles were stripped of their 105mm guns and converted to Kangaroos.
This change of equipment was not very well regarded by the gunners, who considered replacing the 105mm American self-propelled howitzer by the 25-pound towed gun a setback, as we can see in this cartoon drawn by the lieutenant Clay, in the book that tells the story of the 13th Artillery Regiment.
The gun, gun mantlet, crew seats (except driver and mg gunner), and ammunition bins had all been removed, with armour plate welded in position where the gun once was installed.

Upon conversion, the majority of the Kangaroo armoured personnel carriers, retained the markings of the artillery regiments, with which they had served as self-propelled guns, as can be seen in this photo below:
During the conversion process, later vehicles had mild steel plates welded in place of armour plate due to a shortage of the latter; sand was used to fill the space between mild steel welded to both the inside and outside of the mantlet gap. Armour plate was also found on abandoned landing craft on the landing beaches, and material was also taken from the Schneider Steel Works in the city of Caen.
Complete engine overhauls were also performed - normally a seven day job, "Kangaroo" managed to do each engine in 100 hours. The majoraty of the Priests Kangaroos retained the .50 calibre Browning anti-aircraft machine gun, and 60% of the vehicles also kept a No. 19 Wireless Set. A total of 76 Priests had been converted by the morning of 6 Aug, completing the initial production of Kangaroos, just in time for his first operational mission: Operation Totalize.
The vehicle in general were supposed to carry 8 to 12 soldiers, though similar to the practice of troops riding on tanks, it was more common to simply cram as many as possible as could fit without being at risk of falling off. While 'debussing' - climbing out of the hull and jumping down, potentially under fire - was challenging, the obvious difficulty of getting into a vehicle that was designed to prevent enemy soldiers climbing onto it was quickly appreciated. Accordingly, climbing rungs were soon added as a field modification that also simplified loading the carrying compartment with ammunition, food and other supplies to troops under fire. The main access route during the vehicle's "climb" was from the rear, where there were no additional armor plates.
The Priest Kangaroos were first used on 8 August 1944 south of Caen during Operation Totalize with great success and later also in Operation Tractable. The vehicles  were very robust: At the end of Operation Tractable, of the 76 ‘Priest’ Kangaroos originally provided, 61 were still ‘battle worthy,’ while the remaining 15 were ‘recoverable vehicle casualties,’ mostly caused by mechanical breakdown.
By 20 Aug 1944, the Canadian squadron of personnel carriers was organized into the 1st Canadian Armoured Personnel Carrier Squadron. The vehicles were used throughout Sep 1944, and were ordered turned over to a British REME workshop near Cassel on 30 Sep 1944. The squadron refitted with Ram Kangaroos in early Oct 1944.


The Priest Kangaroos served throughout the end of the war, with many field adaptations being made in existing M7 Priest vehicles. They were used as APC, as cargo and ammunition transporters, and as armored Command Posts. In the Canadian and British military, they were gradually replaced by the Ram Kangaroos.


The Ram Kangaroo entered service with the Canadians in September 1944, but in December these minor units were combined to form the 1st Canadian Armoured Carrier Regiment, joining the British 79th Armoured Division (whose specialized vehicles were called "Hobart's Funnies"). The first operation for the Ram Kangaroo was the assault on Le Havre, the last the 7th Armoured Division's march into Hamburg on 3 May 1945. But this will be another story ...
Specs: 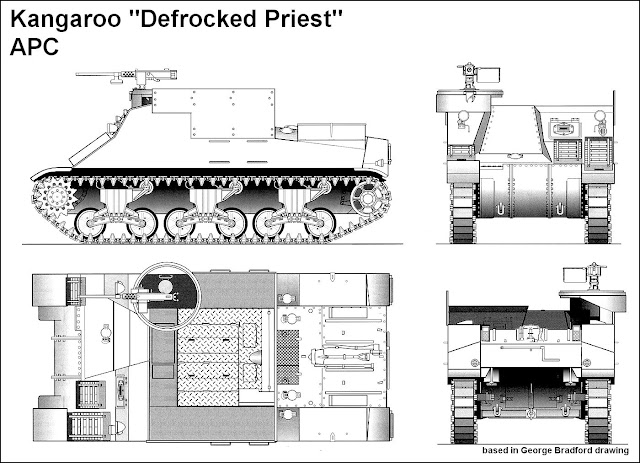 Kits:
For this project, the normal normal would be to use the old, very old Italeri kit Kangaroo Personnel Carrier (#204):
But the Kangaroo Italeri kit is derived from the old kit (from 1978) Priest (# 206) and represents a Priest of the late version, with many features that don't fit the type I want (early), such as the one-piece transmission cover, deep pulpit and low headlamp placement.
My idea was use some Italeri Kangaroo parts on a more "modern" model that looks more compatible with what I want to reproduce, namely: 3-piece transmission cover, the .50 plain "pulpit" of the early Priest models and a more detailed interior ... And the scrap of old Italeri will be used for another project. I am a believer of the Lavoisier Conservation of Matter Law (applied to model kits): "In modelism, nothing is lost, everything is transformed".
So, the kit I had in my closet was the Howitzer Motor Carriage M7 Priest, from Academy (#13210). This beauty was released in 2007... Good, not perfect...but light-years better than Italeri one...
Gentlemen, start your engines!!! Starting by the hulls and suspensions: You know I love build kits in parallel... I'm going to make this Kangaroo along with the Italeri Jurassic M7 Priest ... I'm thinking on a version for it ... but I'll focus here on the Kangaroo photos ... You will no longer see the Italeri kit (dark blue) very coming soon...

One of the flaws of the Academy kit: the wrong rear deck, missing the early model cooling grills. Let's do some minor surgery and use some PE spare grills from my scrap box.

Making the grill's covers in scratch...Much better!!
As I chose to make my Kangaroo as one of those who participated in Operation Totalize, I opted to make a vehicle that featured the side armor plates. Here's the cake recipe: 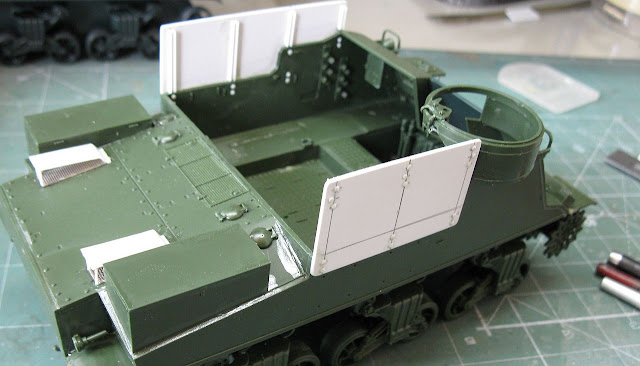 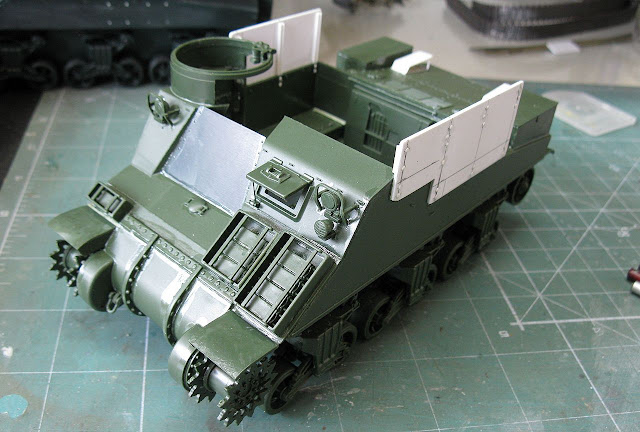 And, as I always try to do, I went to research the Kangaroos of Operation Totalize. and I chose this beauty that was converted from the 13th Field Regiment - Royal Canadian Artillery: 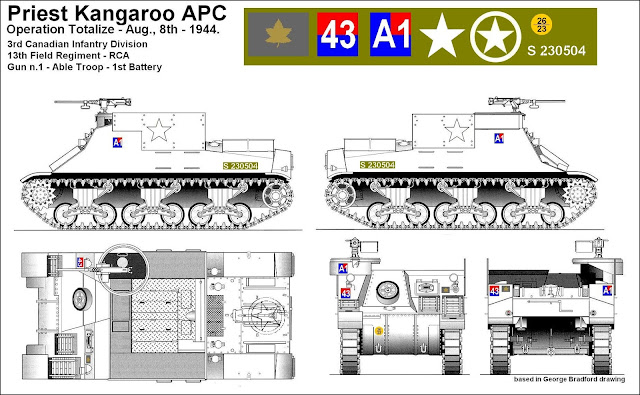 And now, my tribute to a soldier and a person I have always sympathized with and who, coincidentally, served (bravely) in the 13th Field Regiment. I present to you Lieutenant James Montgomery Doohan !!!
Below, one of the best moments of Engineer Scotty, a Canadian with a Scottish accent:

First of all, primer:

Olive drab, for this girl: 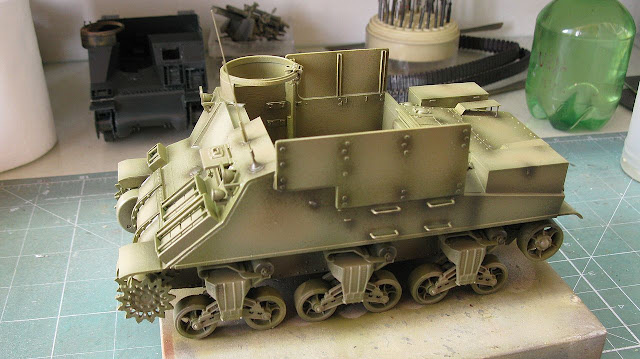 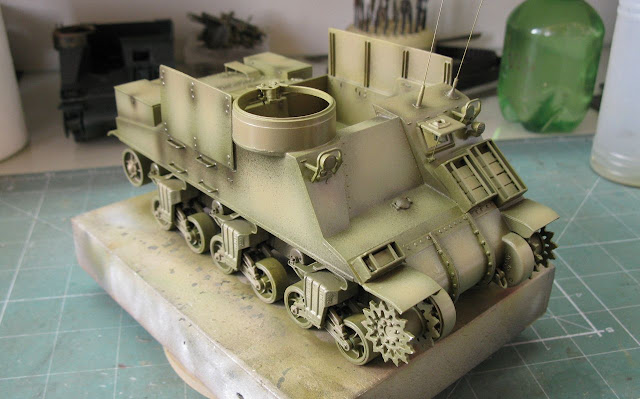 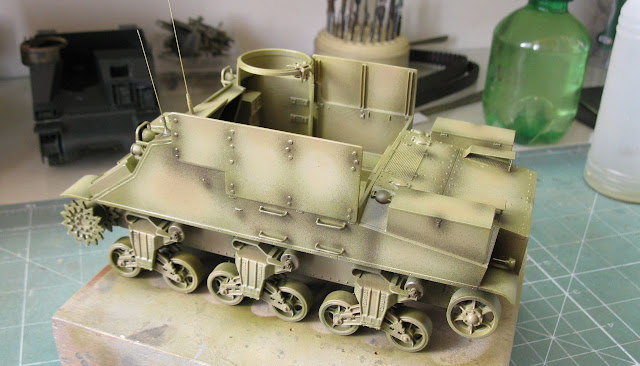 And now, a short tutorial on how to make decals with your homemade color laser printer. The first thing is to use a computer program that allows vector drawings. I use (or rather try to use ...) the Corel Draw 18.
The first thing to do is to mark the desired actual sizes. I love the metric system ... After measuring the spaces for the markings in the kit, I transfer these measurements in millimeters to my drawings.
The big problem is that I can't print the white color, because I use a regular color laser. Drawings with solid color areas are no problem, as we can make areas the same size as white decal markings as a contrasting background. If we applied the decal printed with the markings directly on the kit, the thing would be "off", because the laser (and ink) print is not so "solid" ... the print is almost transparent on lasers and inkjets. Silkscreen solves this translucency problem, but then the technology is much more complicated ....
But back to the equipment we have at home ... You draw the markings that will be printed in transparent decal and the backgrounds (only the contours) on white decal.
And you ask: Why not print everything in white decal? Simple ... The clipping is very complicated and where the scissors or scalp cut, the color is torn out. The decals have horrible white borders !!!
If you make a background with tenths of a millimeter smaller and on that background you apply a colorful decal with defined printed borders, it gets much more professional. But let's see the images ... They speak to us in a thousand languages ​​!!!
After the work is done, I print a test sheet on A4 paper.

Now, things are a little different: the transparent decal with markings you can cut with a small border, which will be invisible after sealing the decal with gloss varnish or Pledge. But the background should be cut EXACTLY in the contours, no more and no less ... If the cut is not precise, this would ruin the aesthetics of the markings. 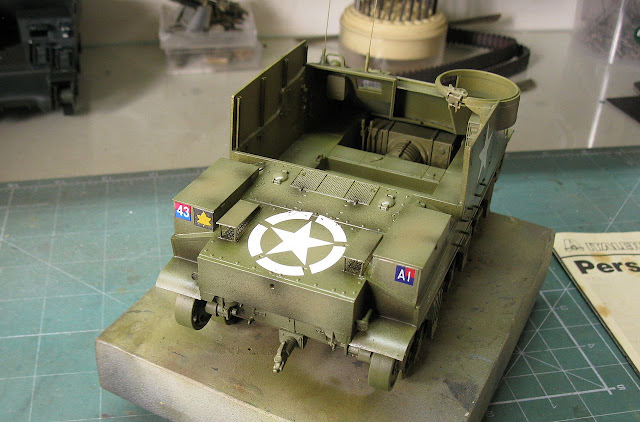 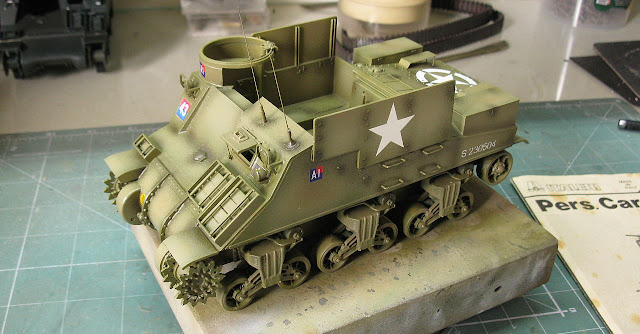 And the work goes on ... Choosing things to put in the vehicle. I love Value Gear accessories !! 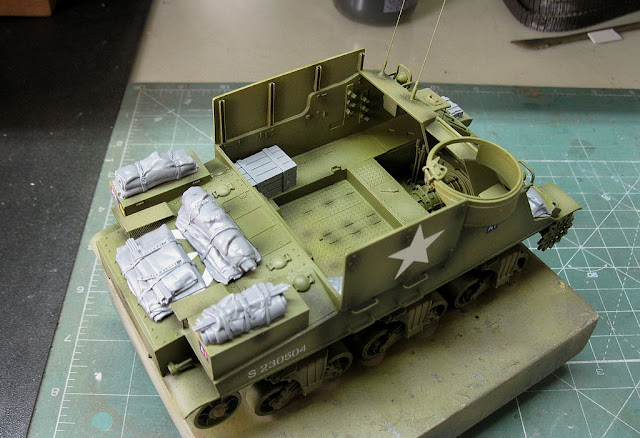 I really am a lazy guy ... and painting stowage is an almost physical pain ... and since we will suffer, we will suffer at once. Painting things from Value Gear and Legend for my future Priest project ...


Well, after weathering and painting and bonding accessories, Kangaroo looks like this:

Using T48 tracks (Tamiya) for my Kangaroo Priest: These tracks are very good... 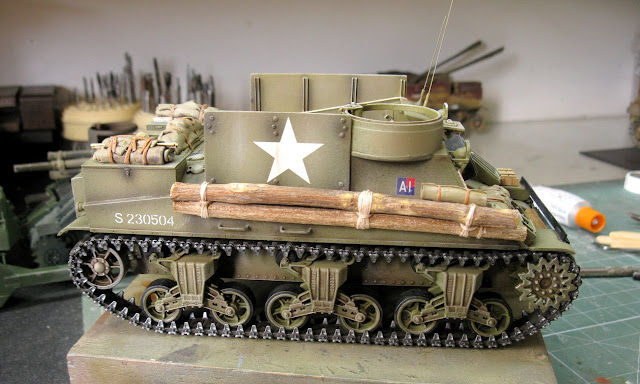 And the Canadian girl was born. Meet the Kangaroo "defrocked Priest" APC with colors of number 1 of the 1st Battery, Able Troop, 13th Field regiment (RCA) from 3rd. Canadian Infantry Division, in August, 8th, 1944, in duties with Operation Totalize. 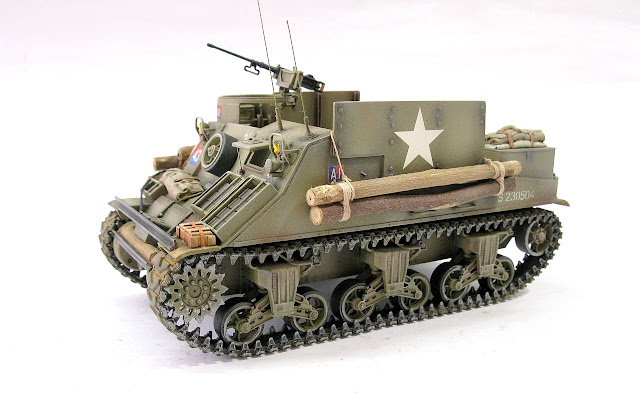 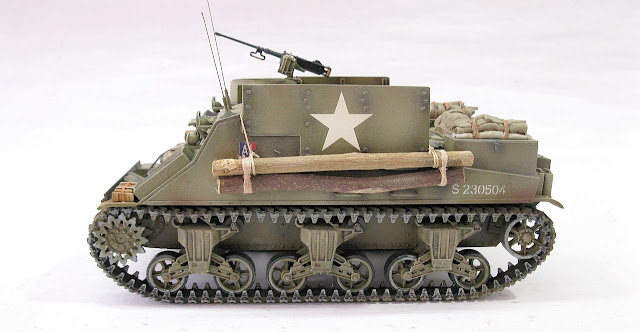 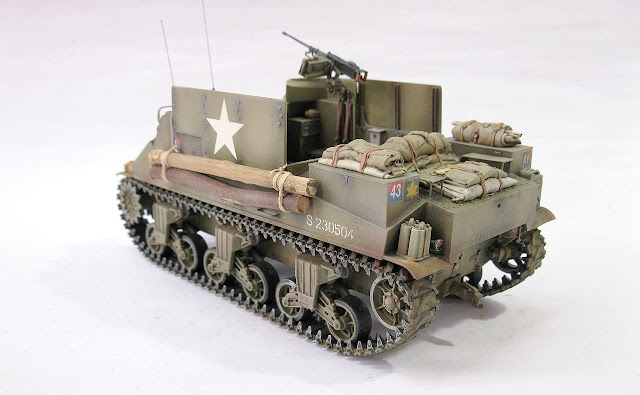 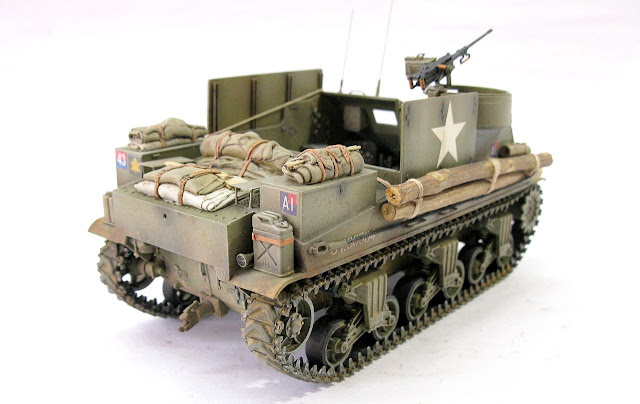 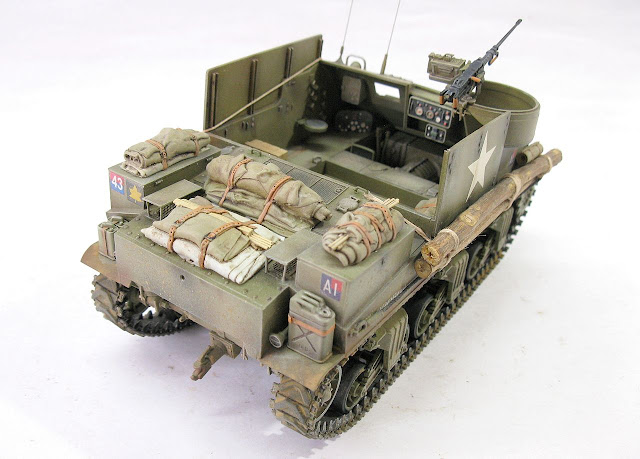 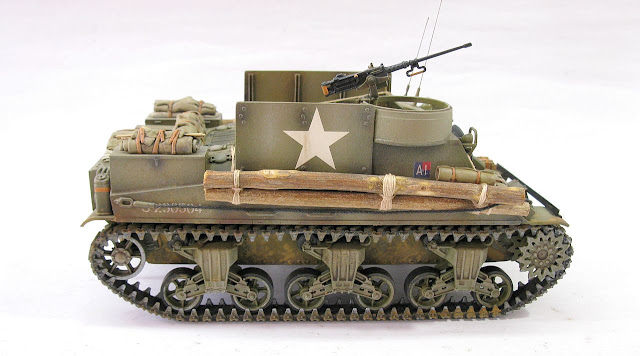 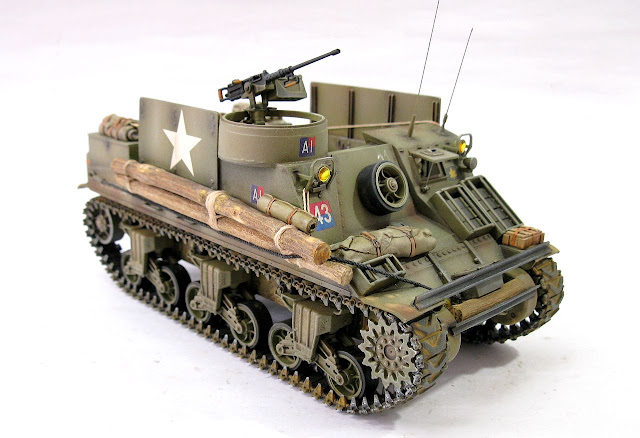 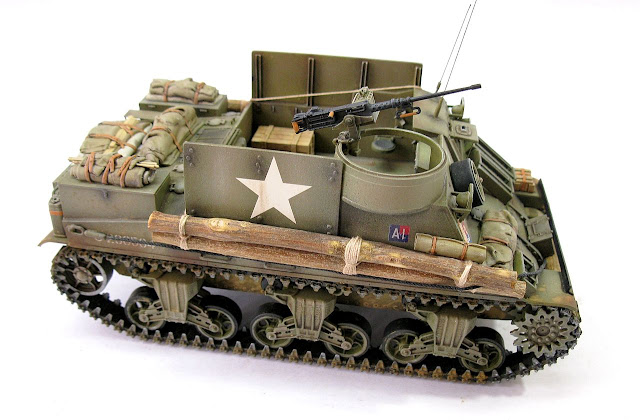 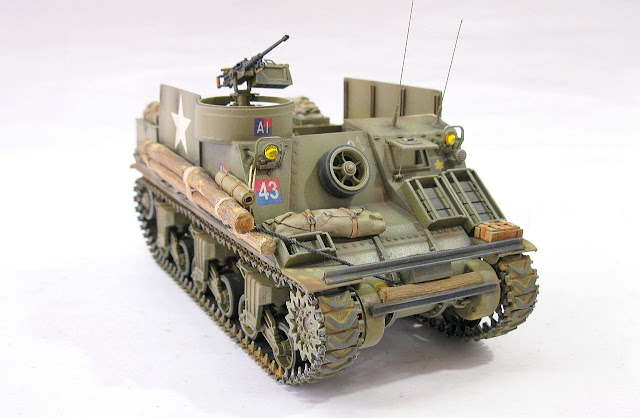 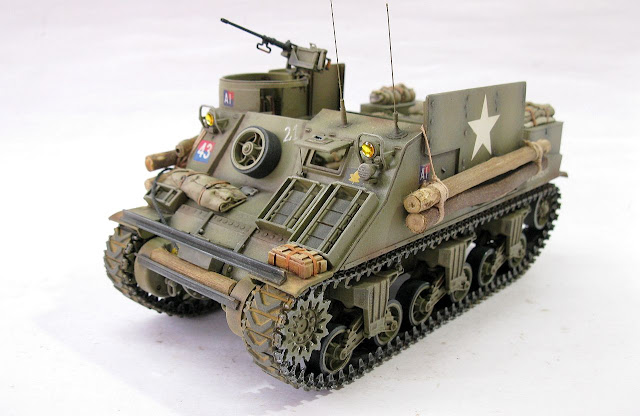 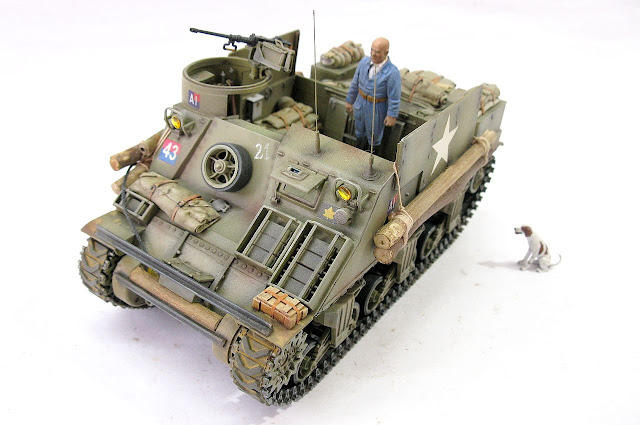 Thank you for following this project, fellas!!
às outubro 19, 2019 2 comentários: