And since we're talking about 57mm guns with high penetration, lets know a tank that used the same weapon and was extremely deadly: the T-34/57 tank destroyer. I built this kit in 2003...wow !!!
History:
The decision of increasing power of artillery tanks KV-1 and T-34 was taken up before the war - in the spring of 1940 discussion on possible options for the installation of new armaments was held at the highest level. As a result, it was concluded the futility of further work on 45-mm guns and their subsequent replacement by a gun with a caliber of 55-60 mm. This decision coincided with the creation of 57mm antitank high power gun ZIS-2, which is engaged in the development of OKB # 92 under the direction of Grabin. 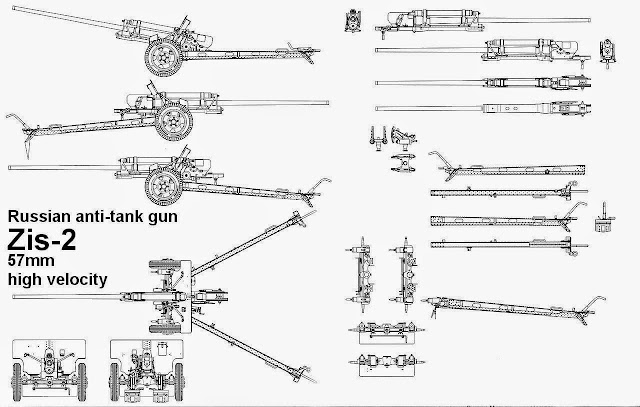 On June 13, 1940, the president of the Security Council S.Timoshenko referred to Central Committee of the Communist Party and SNK USSR the report "...about insufficient power of the armament of existing KV and T-34 tanks, and about other prospective tank projects". On June 27, the special session of the SNK was devoted to that question.

At that time, Grabin's design bureau was working already on 57 mm antitank gun (ZIS-2), that's why it was ordered to develop a tank variant of that 57 mm gun, but first drafts of such gun was already developed by Grabin's initiative. The version of Zis-2 for installation in tanks was named Zis-4.
The manufacture of the first prototype of 57mm tank gun had launched in September 1940, following approval of a proactive move by the Marshal Kulik had been issued the appropriate order and began building a prototype. But until December manufactoring preparations were slow because improvement and mass production of the 76.2 mm F-34 tank gun overloaded factory. Nevertheless, in the beginning of December 1940, the very first prototype of 57 mm tank gun was manufactured.
The gun was put into service this year and not waiting for the official follow an order to develop a tank variant Grabin started working through the options for installing it on the medium tank T-28. 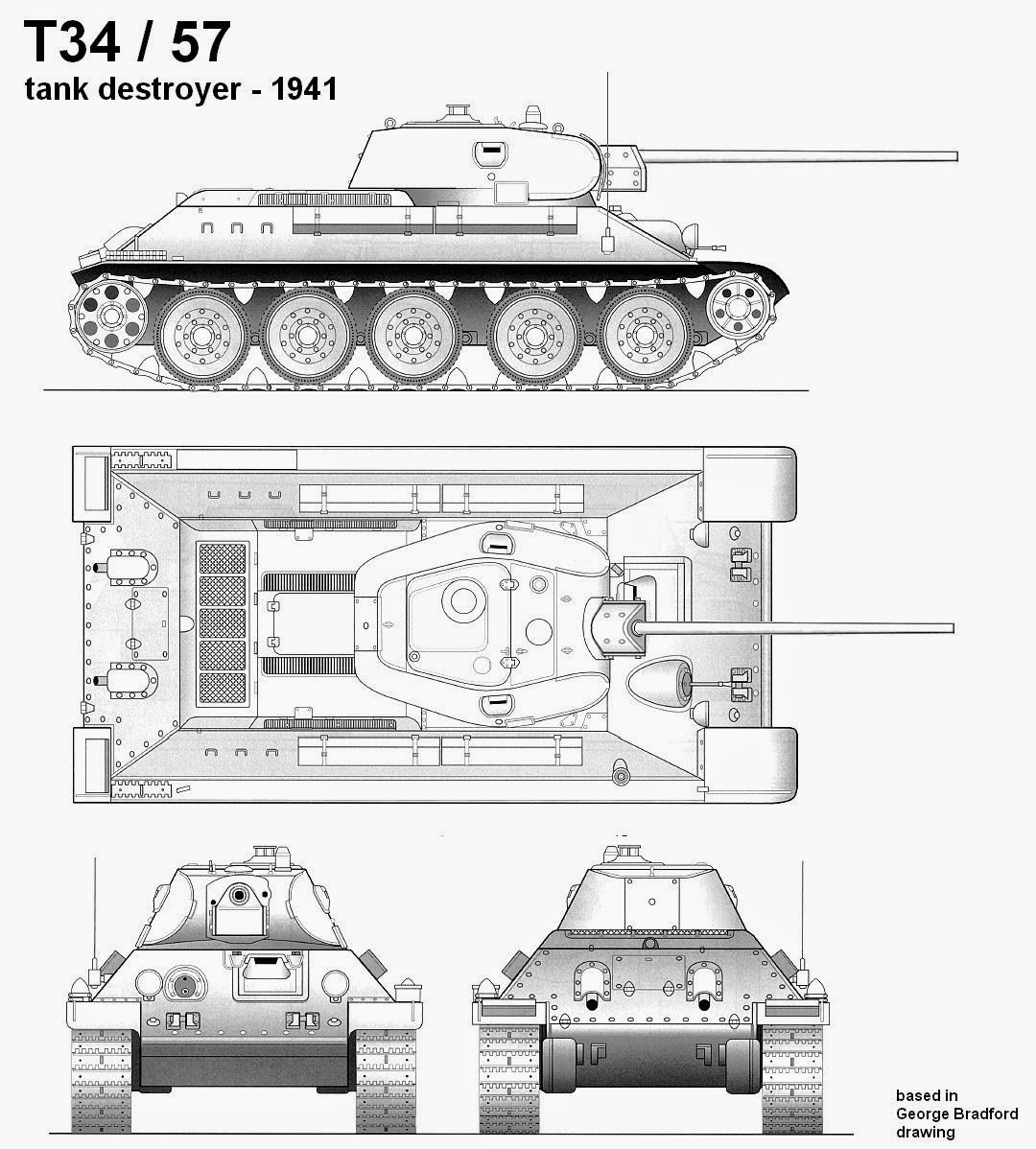 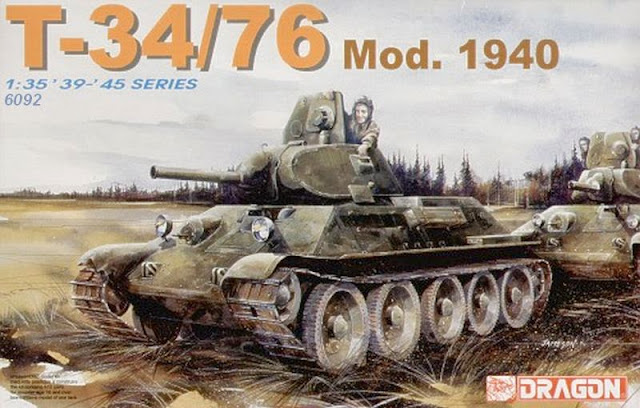 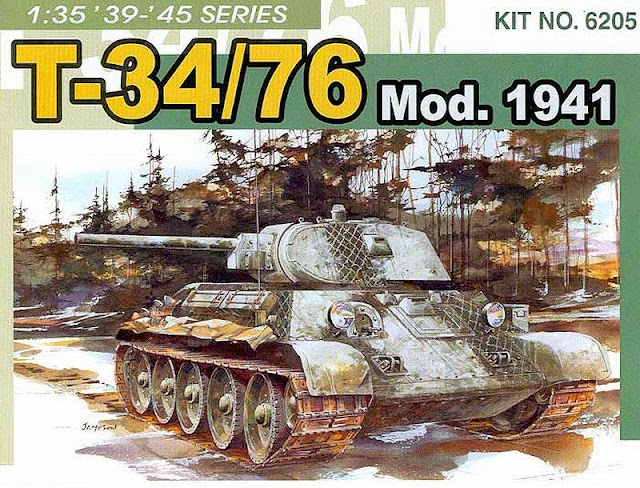 The building was a nightmare. The kit is awful and the instructions booklet a truly bad joke. I recommend the use of dry-runs to avoid errors and mistakes in the building...
In 2003, There wasn't the option of metal gun to replace the rough and terrible Maquette plastic gun. I had to order a barrel in brass, turning in a workshop.
Today, there are several options for these metal barrels, such as RB Model, Aber and Panzer Art.
Scratch and old school modeling techniques to turn this witch in a cheerleader!!! 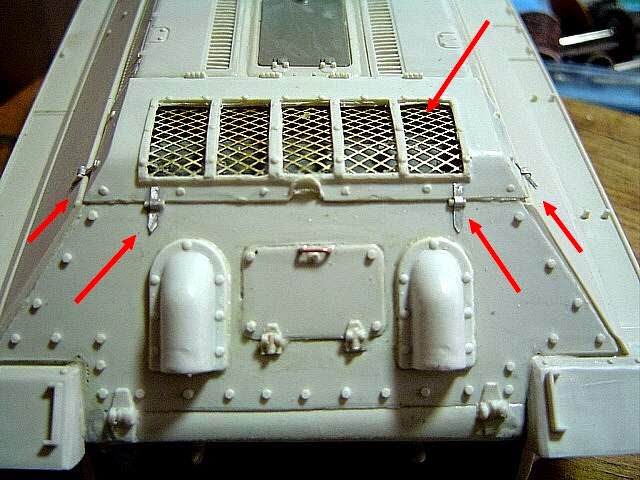 Using dental acrylic to give a rusty surface on the exhaust pipe: You dilute PVA glue 50% water and "paint" the outside of the pipe. Wait 1 minute and immerse the tube in acrylic powder
Painting and markingss of the glorious T34 / 57 1941 "White 20" of major Mikhail A. Lukin, Hero of Soviet Union. 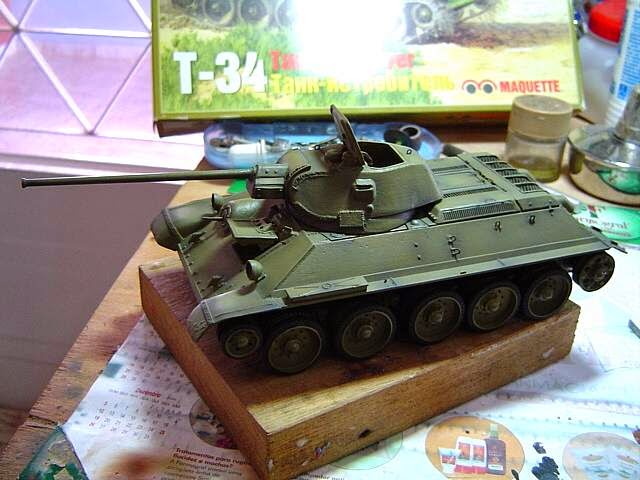 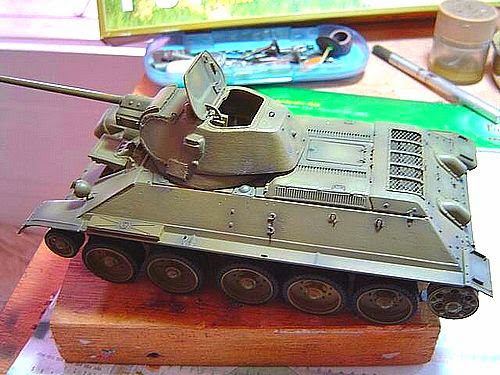 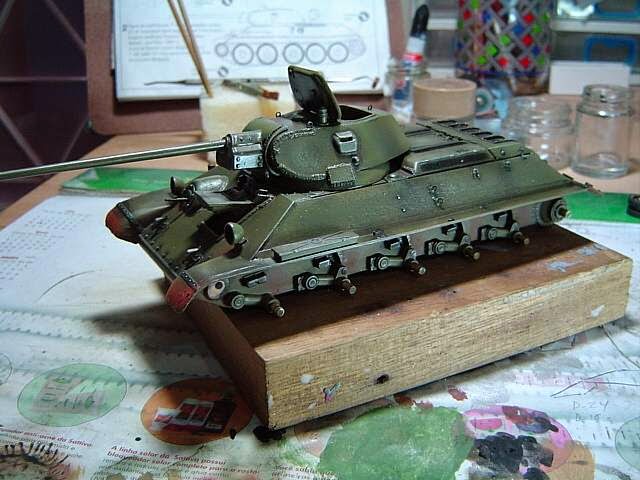 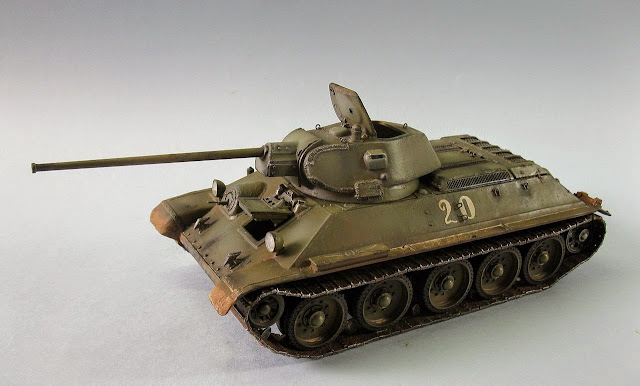 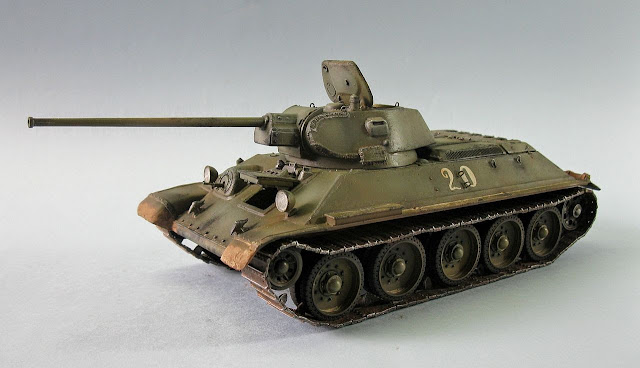 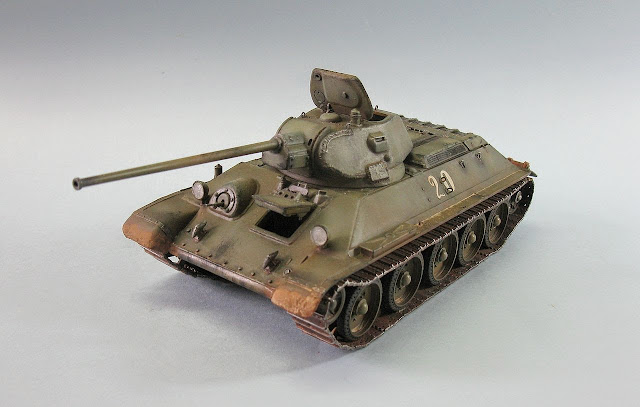 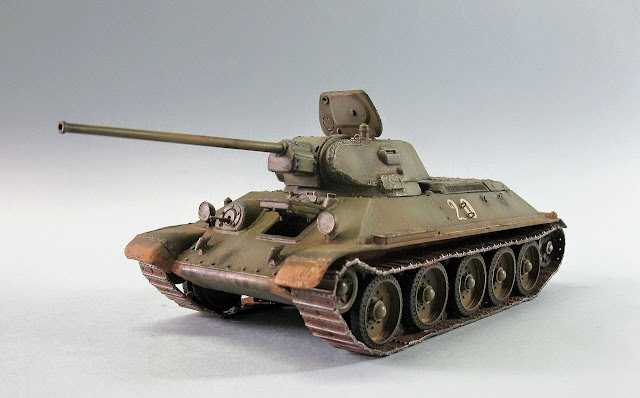 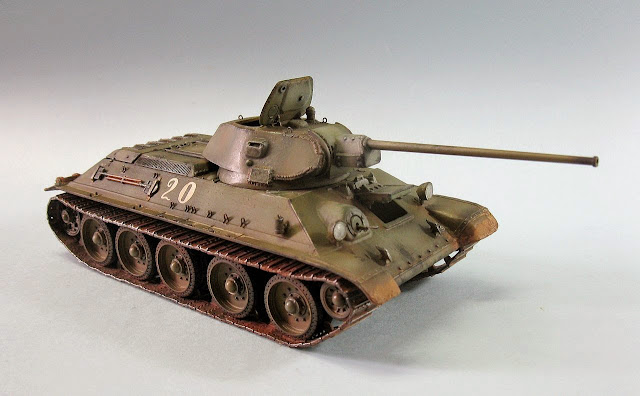 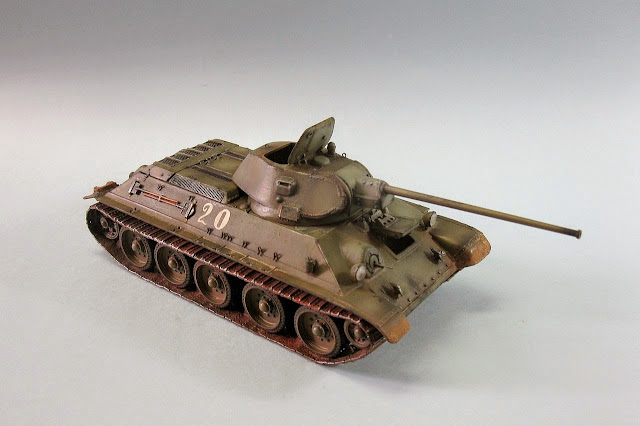 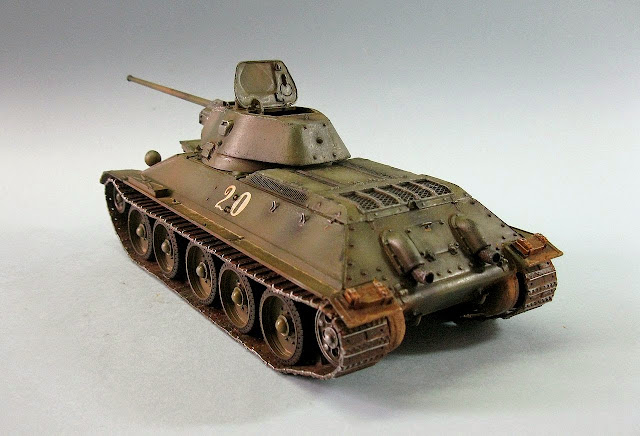 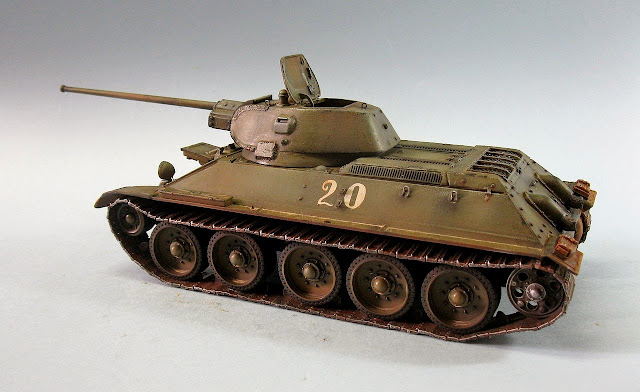 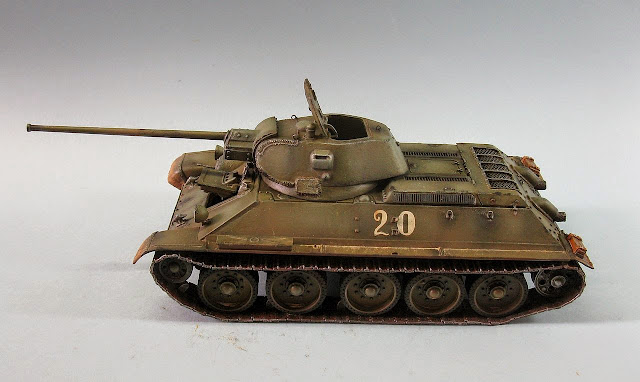 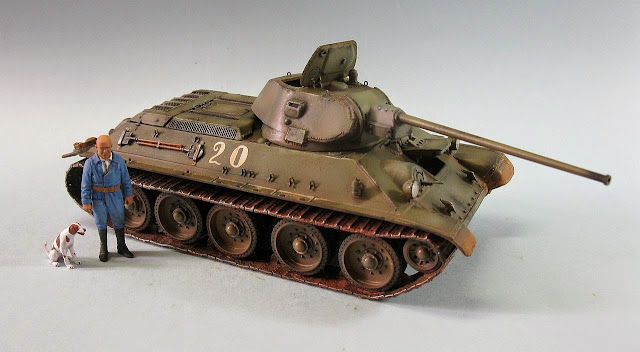 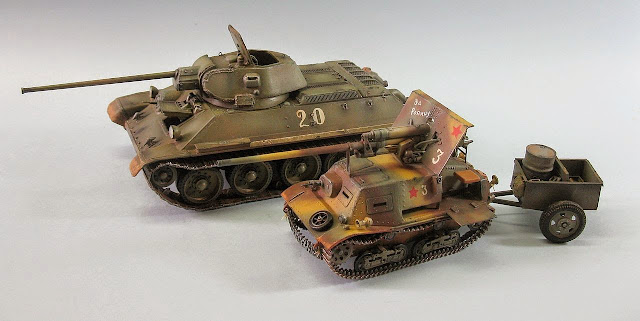 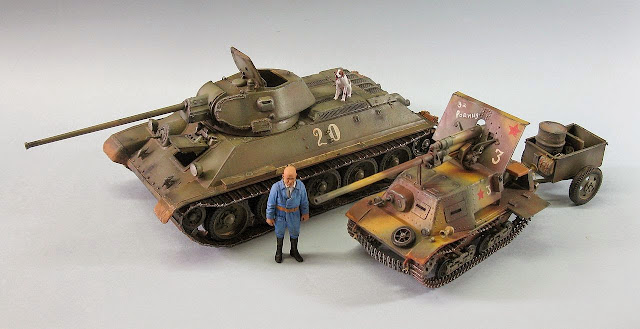 Given the precariousness of the kit and the lack of resources at the time (2003), I even liked the final results and I think that I hit my target ...I hope !!!