Tankers!!!
Flamethrowers are a horrible weapon, without a doubt ... And in WWII they had their biggest moment... Let us know what many consider the best vehicle developed for this terrible function. We are talking about the British Churchill Mk. VII Crocodile - flamethrower tank.

History:
The Churchill Crocodile was a British flamethrower tank of late WWII. It was a variant of the Tank, Infantry, Mk VI (A22) Churchill Mark VII, although the Churchill Mark IV was initially chosen to be the base vehicle.

The Crocodile was introduced as one of the specialised armoured vehicles developed under Major-General Percy Hobart, informally known as "Hobart's Funnies". It was produced from October 1943, in time for the Normandy invasion.

Design and development:
From early in the war, there had been experiments with mounting flamethrowers on British vehicles; leading to vehicles such as the Cockatrice, Basilisk and the Wasp (the latter being a flamethrower on a Universal Carrier). The Churchill Oke, a flamethrower carrying Churchill Mark II developed by a Royal Tank Regiment officer, was tested operationally on the Dieppe Raid.

Parallel development work was carried out by the Petroleum Warfare Department, AEC and the Ministry of Supply (MoS) on Valentine tanks. The Department of Tank Design preferred the Churchill, which was the Infantry tank successor to the Valentine, as a basis for further work.
General Percy Hobart saw the Crocodile demonstrated in 1943 and pressured the MoS to produce a development plan and the Chief of the General Staff added the flamethrowers to the 79th Division plan.
Final design:
The flamethrower equipment was produced as a kit that REME workshops could fit in the field, converting any available Churchill Mk VII gun tank. The conversion kit consisted of the trailer, an armoured pipe fitted along the underside of the tank, and the projector, which replaced the hull mounted Besa machine gun.
The Crocodile was therefore still able to function as a gun tank with its turret mounted Ordnance QF 75 mm gun.
Of the 800 kits produced, 250 were held in reserve for possible operations against the Japanese. The remainder was sufficient for producing three regiments of tanks as well as training and replacements for battlefield casualties.
The Crocodile's six and a half ton, armoured trailer carried 1,800 liters of fuel as well as five cylinders containing compressed gas propellant.
This was enough for eighty one-second bursts. The trailer, connected to the tank by a three way armoured coupling and could be jettisoned from within the tank if necessary. 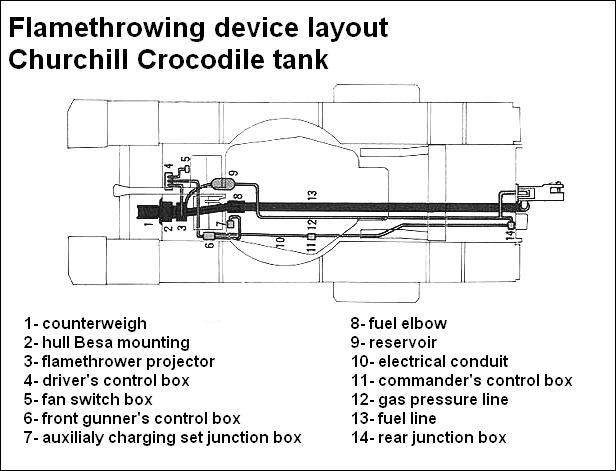 For transport over long distances, Crocodile units were issued with AEC Matador lorries to tow the trailers. The tanks themselves would be moved on tank transporters.
Flame projector:
The thrower had a range of up to 110 m, although some sources quote almost 140 m. To ignite the flame, the projector used a fine spray of petrol from the Crocodile's main fuel tank, this was ignited by a spark plug, and in turn ignited the main fuel jet. The operator could spray long or short bursts of flaming fuel onto the target. The operator could also spray the target with unignited fuel, then set it on fire with a short, lit burst. See below the Churchill Crocodile tank GRACE in operational training:

Refuelling took at least 90 minutes and pressurization around 15 minutes; the pressure required had to be primed on the trailer by the crew as close to use as feasible, because pressure could not be maintained for very long.
The fuel was projected at a rate of 18 liters per second. The fuel burned on water and could be used to set fire to woods and houses.

Service:
Used by units of the 79th Armoured Division in concert with the Churchill AVRE, and other Funnies, the Crocodile was an effective assault weapon whose threat could induce enemy troops to retreat or surrender.
The Crocodile was a specialised weapon limited by the short range of its flamethrower. On the other hand, it was used so successfully against bunkers that many surrendered after the first ranging shots. Aspects of the mechanism were considered by the British to be so secret that disabled units, if they could not be recovered, were rapidly destroyed by any means, even air strike, if necessary.
British Crocodiles supported the U.S. Army in the Normandy bocage, at the Battle for Brest, and during Operation Clipper, the Anglo-American assault on Geilenkirchen. C Squadron also supported the 53rd Welch Division assault on 's-Hertogenbosch in October 1944.

The units that used the Crocodile in North west Europe, generally as part of 31st Armoured Brigade, were:
The flame projector was a powerful psychological weapon, so feared by the Germans that captured Crocodile crews were often summarily executed.
In Italy, the 25th Armoured Assault Brigade (51st (Leeds Rifles) Royal Tank Regiment)) operated Crocodiles.

From late 1950 until their withdrawal in 1951, Churchill Crocodiles served in Korea as part C Squadron, 7th Royal Tank Regiment in 29th Brigade.
See below the amazing video from Bovington Museum, about Churchill Crocodile, brilliantly explained by David Fletcher... Worth it!! 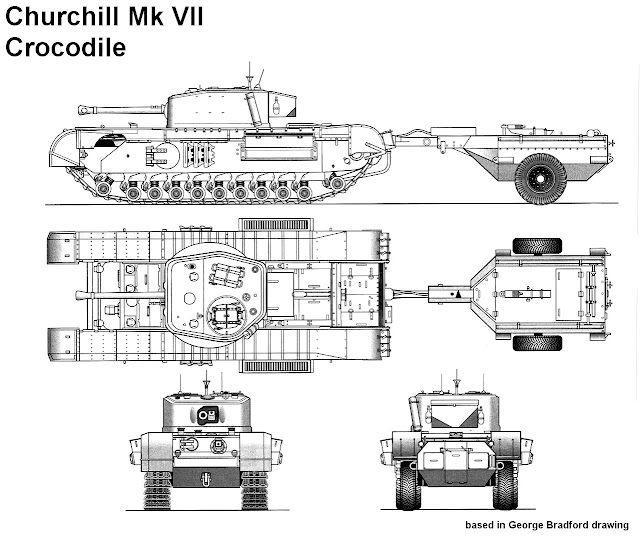 Kit:
About the kit, this is the only option in the market, for a long time: I built this girl many years ago and she was with the wrong markings and weird colors but very well built. I decided to remove the paint and old markings with caustic soda (see the article on Churchill Mk.VII) and make a nice up-grade on the model.
Of course this kit does not have the same level of detail as the most modern AFC Club Churchill family kits, but this Tamiya one (from 1977... amazing!!)  still an example of very well-injected and extremely easy to assemble kit, keeping the Tamiya tradition of perfect fittings and swift building. The contents of the kit box: 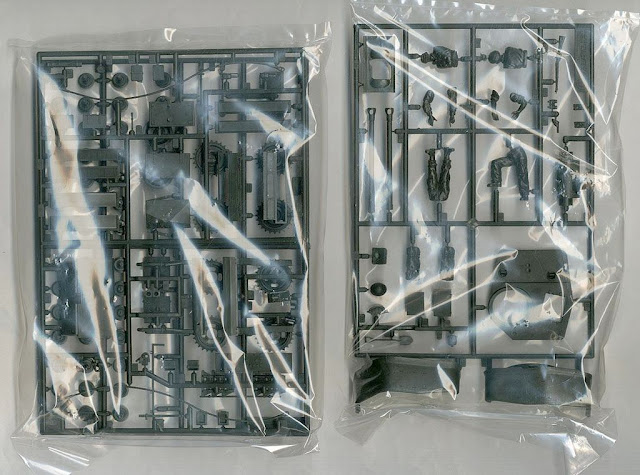 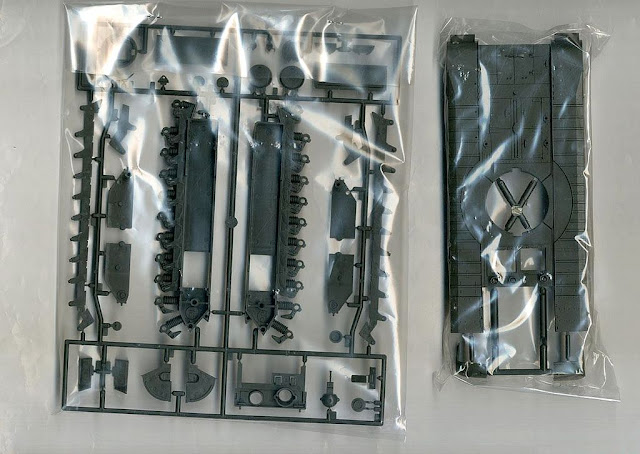 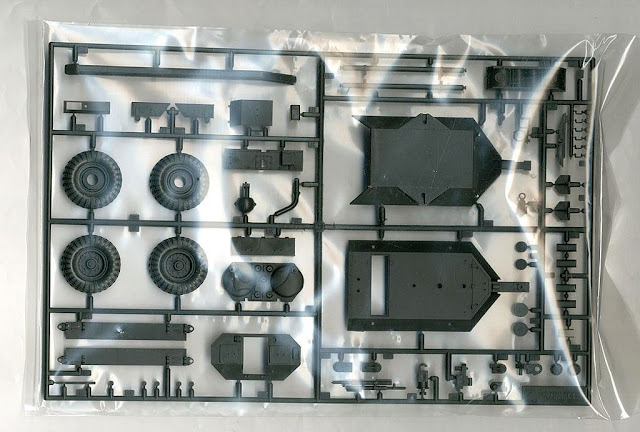 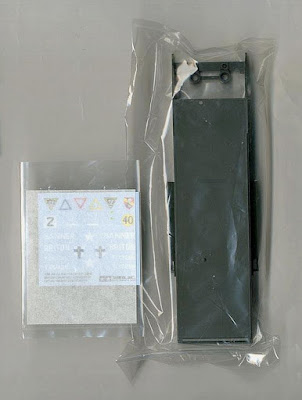 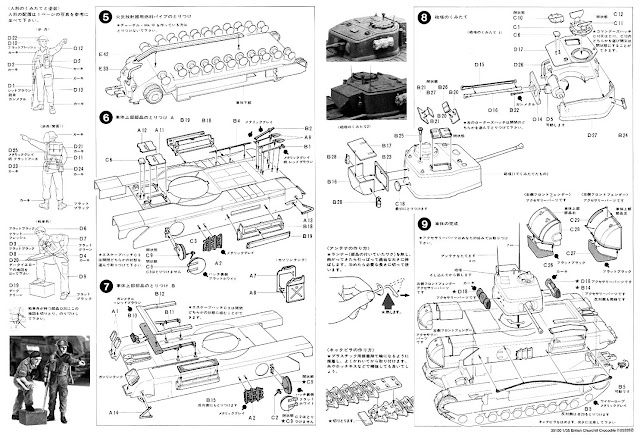 The building steps unfortunately they were not preserved, but I have the overhaulin photos I made this year. First, the markings: Churchill Mk.VII Crocodile BASTARD,from 79th Armoured Division (The Funnies) - 1st Fife & Forfar Yeomanry - B Squadron, in duties in Germany, Rhine, March-1945. 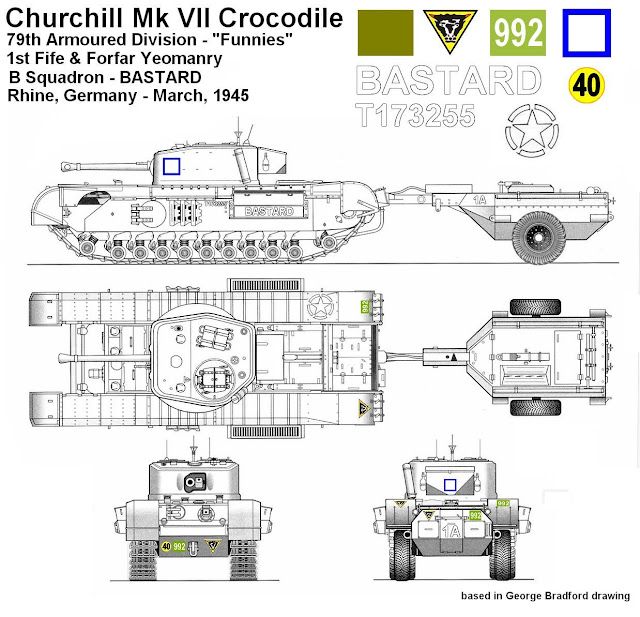 My decals, after researching in this excellent book of Dick Taylor: 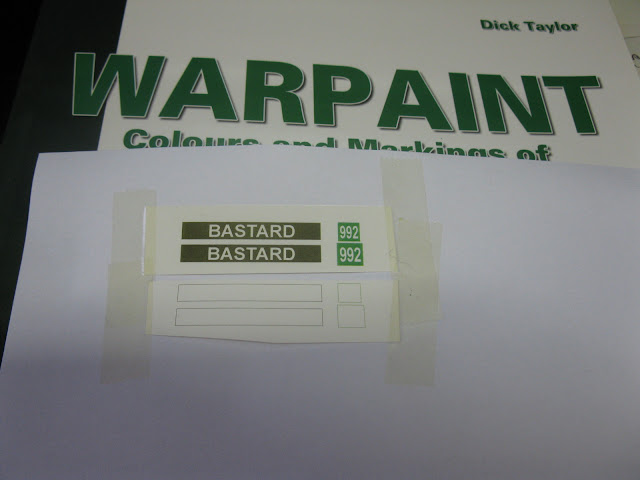 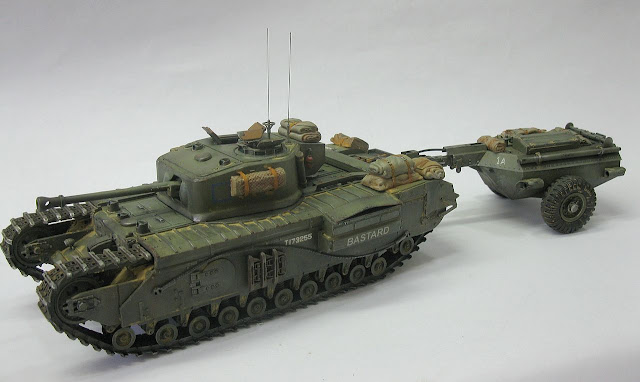 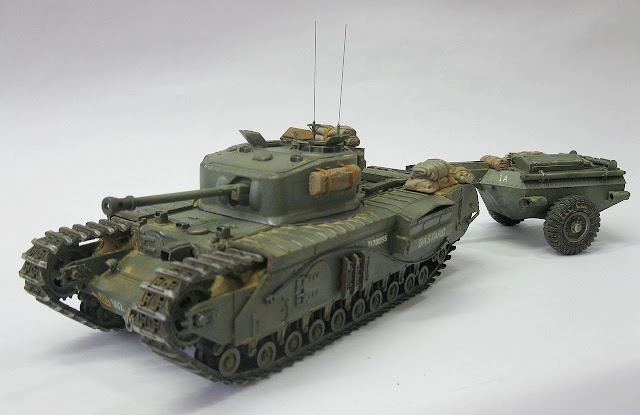 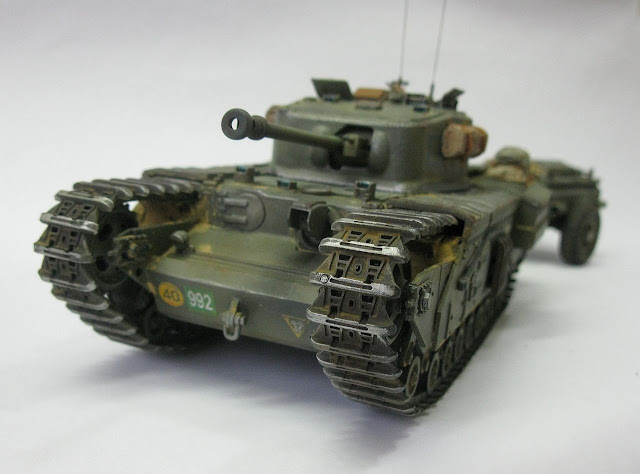 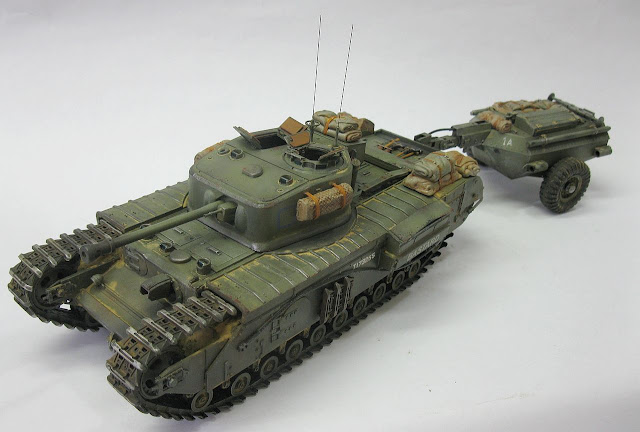 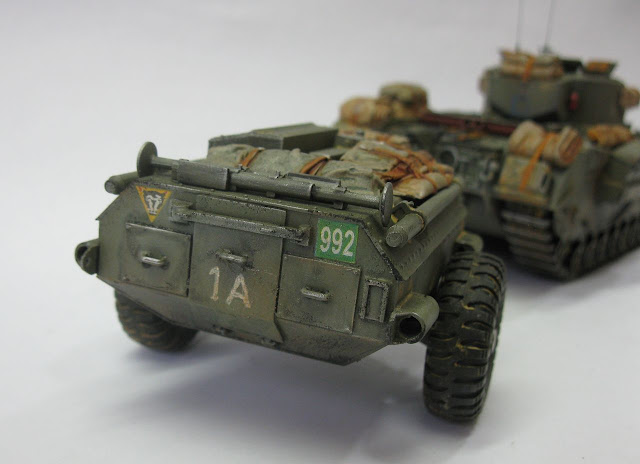 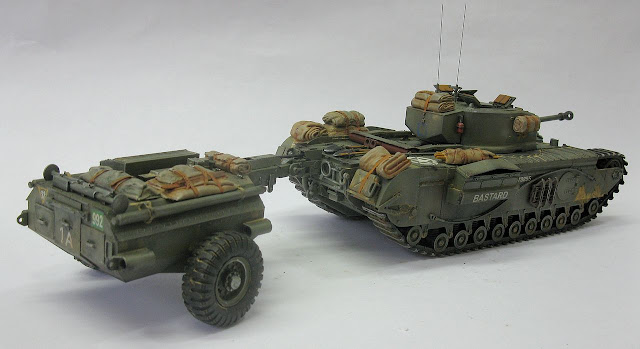 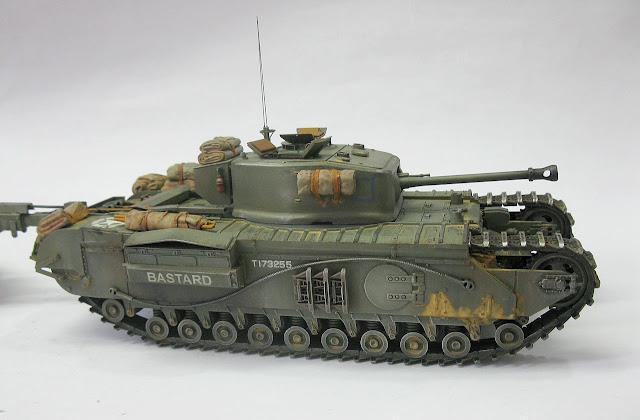 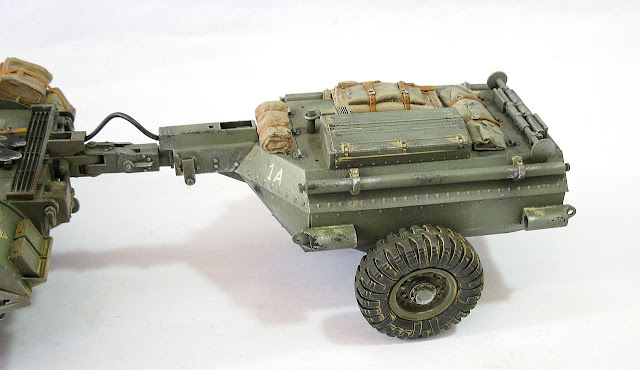 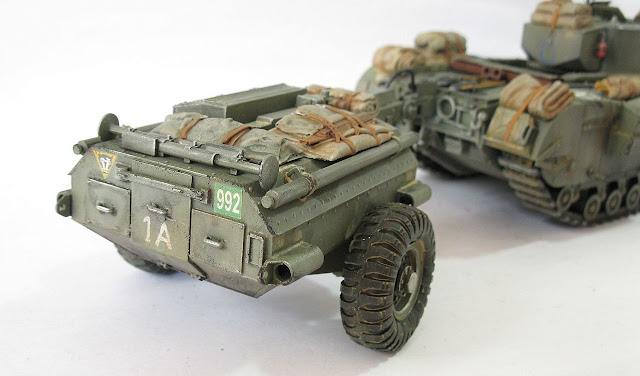 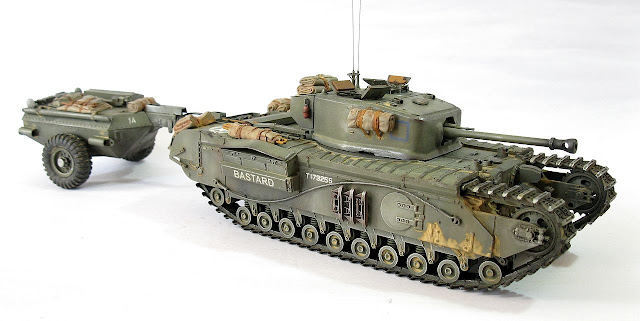 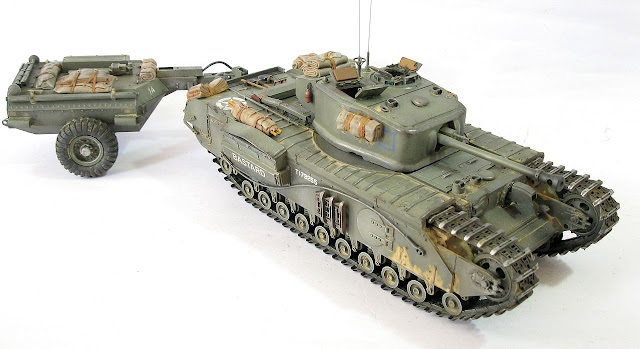 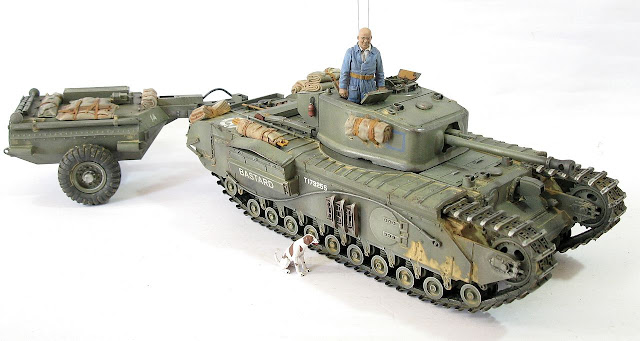 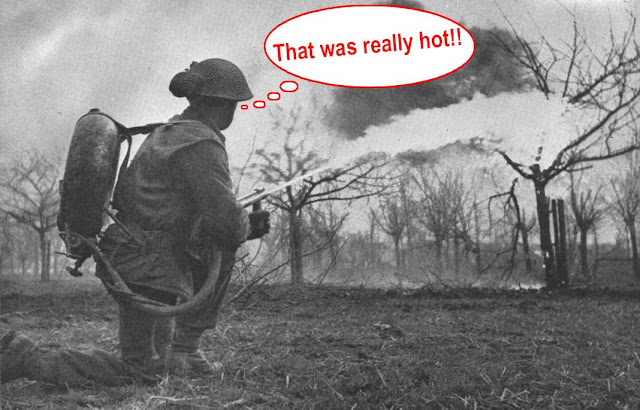