This is one of the weirdest versions of the Churchill infantry tank: the Churchill 3 inch 20 CWT gun carrier. Let's get to know this ugly (and powerful) example from the famous Churchill family. 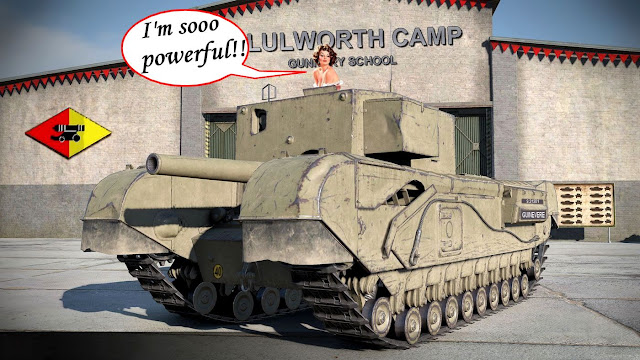 History:
Although the British Army had developed self-propelled artillery during the WWI, and used it to some extent, the concept did not prove popular in the military. A few experimental vehicles, known as Birch Guns, were produced after the war but by the end of the 30's there was no perceptible interest at all and no prototypes to provide inspiration for more models.
By 1940, the concept of self-propelled artillery was up for consideration again, but with two quite different objects in view. The Royal Artillery was interested in obtaining self-propelled mounts for two of its weapons, the 25-pounder field gun/howitzer and the 6-inch howitzer. The 25-pounder version originated the Bishop, a self-propelled artillery vehicle based on the chassis of the Valentine infantry tank., but the 6-inch vehicle was only in the realm of conjecture. The 6-inch project was finally cancelled in December 1941. 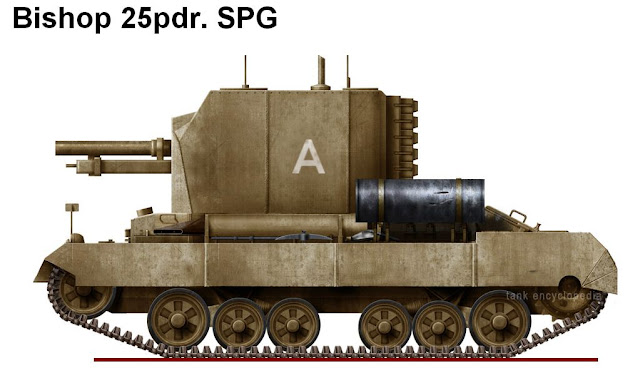 The other self-propelled gun project was quite different: It was born of the desperate need to find a weapon powerful enough to defeat German armour in the dark days of a possible Nazi invasion. No one was expecting a sophisticated weapon system, which might take years to develop but all they wanted was a quick and effective means of transporting the powerfull possible anti-tank gun on some sort of tank chassis, and that it was available as fast as possible... But which gun? 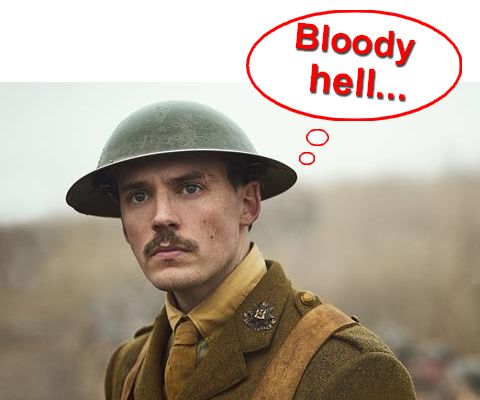 The 2-pounder gun was "little" and weak ... The 6-pounder was still in development, as was the mighty 17-pounder... Nothing big and powerful was available immediately on those distressing days...
Specialists were consulted and they came up with the idea of using an anti-aircraft gun, firing a high muzzle velocity projectile, that would allow to penetrate any contemporary German armor. And the gun available at the time that fit these parameters was the 3 inch, 20 cwt AA gun.
The 3 inch AA gun dates from 1914 and it was common to both the Army and Royal Navy, so the stocks of guns and ammunition were good.


By 1940 it was slowly being replaced on land by a superb new QF 3.7-inch AA gun and there was no problem in providing 100 or more old 3-inch barrels for this self-propelled project.
Who first came up with the idea of using an anti-aircraft weapon as anti-tank weapon is not entirely clear, but we now know that German troops used their splendid Flak 88mm anti-aircraft gun against tanks in the Spanish Civil War in 1936 and again in France, against French and British armor, with devastating effects ... but it is very unlikely that anyone in Britain would have been fully aware of these details in 1940-41.
However the performance of the British gun speaks for itself, and availability must have been another key factor. Firing horizontally the gun had a range of some 11.000 meters and firing a 5,67 kg armour piercing round, could penetrate 84mm of armour, at 30 degree angle. at 914 meters. The German 88mm was better, but it was larger and fired a heavier shell at a higher muzzle velocity (810 meters per second against 610 m/s for the 3") Compared with the American (618 m/s|) or British 75mm tank guns of 1942/ 43 (620 m/s) the 3 inch 20 cwt was very impressive indeed. 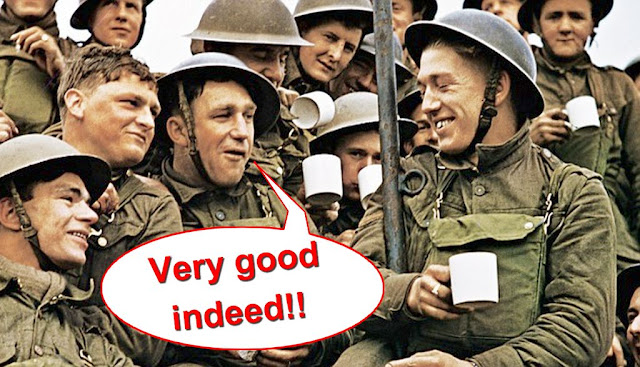 The project was authorised by the War Cabinet and the A22 Churchill was the best choice for a chassis. By the end of April 1941 it was learned that general arrangement drawings for the new mounting were more or less complete. Early in July a wooden mock-up was nearly complete. On 25 July 1941 a contract for 100 'Tanks A22 "Special Type" (Churchill 3" 20 cwt Self Propelled Mounting)' was issued in favour of Vauxhall Motors.
The Director General of Tank Supply, announced that 24 of the guns should be completed as quickly as possible and within days the order had been officially signed for 24 machines. In January 1942 it was revised to 50: that is one pilot model and 49 production machines to be assembled by Beyer Peacock & Company of the Gorton Foundry, Manchester, a firm famous for constructing the huge Garratt articulated steam locomotives. Vauxhall Motors was spared to focus on the mass production of the normal versions of Churchill.
All 50 vehicles were completed by November 1942 and issued with the War Department numbers S31273 to S31321. The first edition Instruction Book for this vehicle, published in August 1942, gives it the official title of Carrier, Churchill 3 in. Gun Mark I.
The vehicle was little more than a standard Churchill hull with a large, box-like superstructure and the gun mounted low down at the front, to the left of the driver. 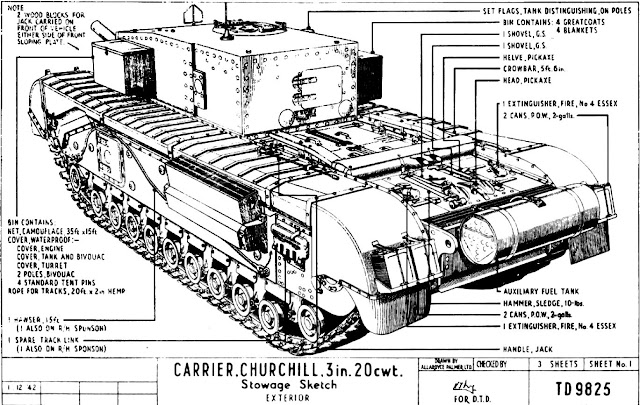 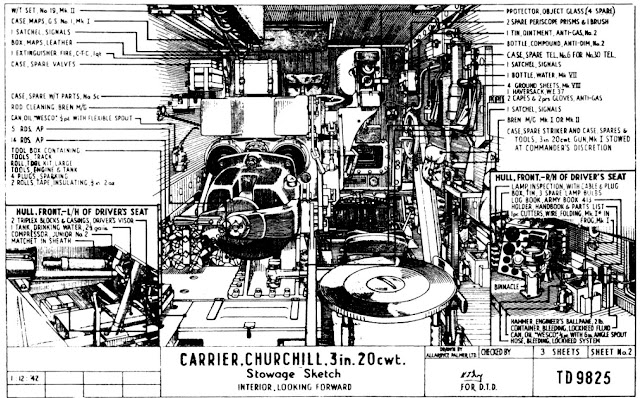 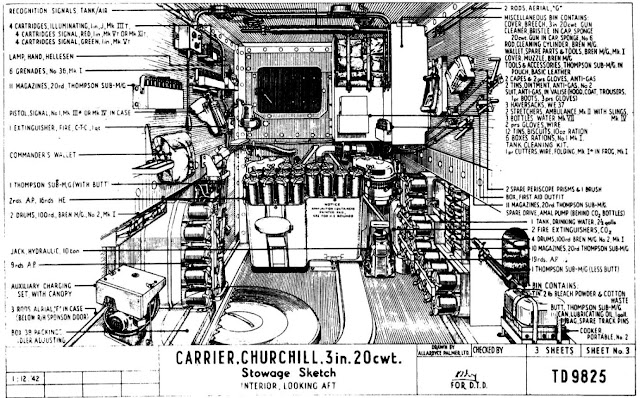 The frontal plate. which is a direct extension of the vertical driver's visor plate was 89 mm thick, with 76 mm at the sides and 15 mm on the roof. Overall weight is given as 39 tons; length 7.950 mm. (including gun) and height 2.768 mm. This was nearly a 304 mm taller than the Churchill I but it was exactly the same width.

The Churchill 3 inch gun carrier had a crew of four: The commander was positioned on the right side, and he was the only one with a roof hatch, or cupola. Its station is the most posterior, on the right side of the superstructure. On its left side, with a certain circulation space, is the loader, feeding the 3-inch gun with its shells stored on the sides of the vehicle (see chart). In the front right portion is the driver's station, in the normal position of all Churchill tanks. The worst position is for the gunner, who twists between the commander and the driver. He almost bends over the driver's position, commanding the gun's elevation and transverse levers, installed in the right portion of the gun.. The Churchill gun carrier's rectangular casemate superstructure was tight for the crew. Even more so because the 3 inch cannon was very bulky. 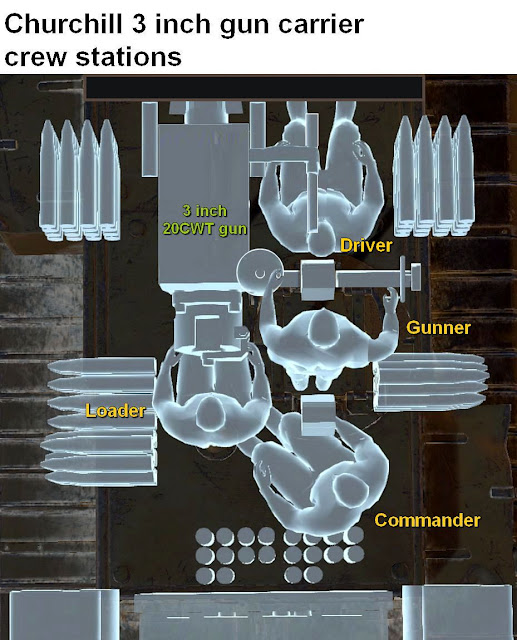 The 3 inch gun had maximum elevation of 15 degrees, depression of 10 degrees and traverse just 5 degrees either side of the centre line. Thus it was essential that the driver be in his place with the engine running whenever the Churchill was in action because lateral movement of the gun beyond 5 degrees was his responsibility, rotating the entire vehicle with its tracks.
Typical ammo stowage was 49 rounds of armour piercing shells (AP) and 16 rounds of high explosive (HE). There was no permanently mounted secondary armament but a Bren gun was stowed inside the crew compartment (and a Lakeman MG mount installed out, in the right side of the hull...) along with two Thompson sub-machine guns.
During an engagement the commander first selected his target by directing the driver, lining the tank up, using his external sighting vane. To assist this part of the process the driver had his own traverse indicator alongside his visor. Final target acquisition being taken care of by the gunner. Firing on the move was impossible since the gun itself was too heavy. When the Carrier was travelling the gun had to be locked in full elevation to prevent damage.
If, as the contract cards appear to show, the order for these Carriers was completed at the beginning of November 1942, they appear to have been emerging at the rate of about one a week, starting in May. One explanation of this might well be production problems but it is also reasonable to assume that they were, by then, a very low priority: the purpose for which they were designed had disappeared. The threat of an invasion of Britain had passed and, indeed, a substantial attack on occupied France was in the offing.
The question of what to do with the Churchill Gun Carriers must have been exercising some minds but documentary evidence is almost entirely lacking. Only one vague clue can be found in an entry in the War Diary of 14 Canadian Army Tank Regiment, otherwise the Calgary Regiment of 1st Canadian Army Tank Brigade.
By mid-1943, most of the Carriers were converted to standard tanks and some for ARVs (armoured recovery vehicles). However one Churchill gun carrier, at least, retained its superstructure and was used as a test vehicle to carry and launch 50 Snakes, the oversized version of the mine-clearing line charges Bangalore torpedoes. Some sources quote this version as Churchill Wurlitzer (band organ).
main font: 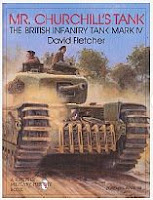 The kit:
In our glorious days, if you want to have this beautiful machine in your collection, just buy the AFV Club Churchill 3 inch 20 CWT Gun (#AF35253):
But in the old and shady days, when dogs were being lashed with sausages, there was no easy and swift option... There was no wonderful Churchill family from the AFV Club ...The only Churchill in the market was the veteran Tamiya's Churchill Mk.VII (#35210). Wrong model and wrong chassi for this girl...
But "Modeling always finds ways to develop and prevail" !!! In the last century there was a resin conversion from International Models Asia (IMA) (today discontinued ...) which was the solution ...
And I just "committed" this heretical building!!

Beware of the following images: they are at least shocking !!!

But as I am a fanatic beliver of the "Law of Conservation of Scale Model Matter" (Not Lavoisier's one, but Panzerserra's law...), which reads: "In modeling, nothing is lost, everything is preserved and transformed!", the time has come to bring this beautiful girl to a more "convincing" reality !!! She deserves it!!! First of all, lets rip off the old paint ... Caustic soda !! Be very careful at that time !!


After 6 hours under the action of the alkaline bath, a vinegar bath, to neutralize the excessive alkalinity of the surface of the kit ... 30 ml of vinegar are sufficient for this ...

And since I was working with other Churchye girls, I started using AFV parts from my spare-parts box to upgrade the Tamiya girl !!! First of all, removing the periscopes, which did not exist in the original vehicle ... And I did not return the triangle of "soft armor" because my girl will be of the production type.

Now, painting and marings...During the research on this girl, this photo caption caught my attention: It's showed a Churchill 3 inch gun carrier in training at the Lulworth Gunnery School, in Dorset, England!!
As I love making my vehicles with a historical foundation, I wanted to place my girl in the real time and space ... and I drew these markings which, historically, may have been used. The serial number fits in the latest models, with extra armor in the hull and the coats and markings used by the vehicles when being tested at the School. The name GUINEVERE is totally fictitious, but I think it's totally appropriate for a "Naughty Queen" like is my girl !!!
Gentlemen, I present to you my beautiful Queen, GUINEVERE, a Churchill 3inch 20CWT gun carrier training their skills in Lulworth Gunnery School, Dorset - England, in the Spring of 1943. 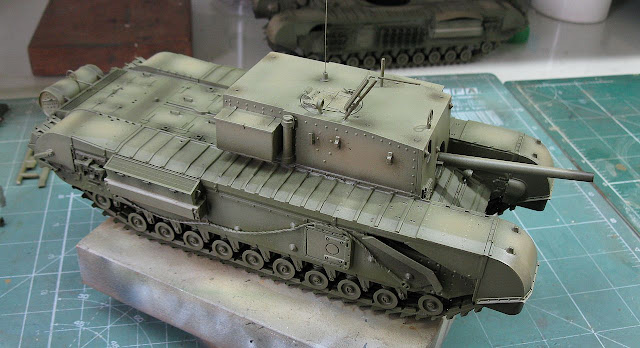 The profile to guide me in the impression of my decals ...

As my printer does not print in white (it's an old Laserjet Color ...), I use white decals as backgrounds and transparent decals for colors and markings. The white letters and numbers I print in transparent decal sheet the numbers surrounded by colored margins as close as possible to the base color of the vehicle. Afterwards, I masked the numbers and/or letters and repainted the margins. It is laborious but it works ... 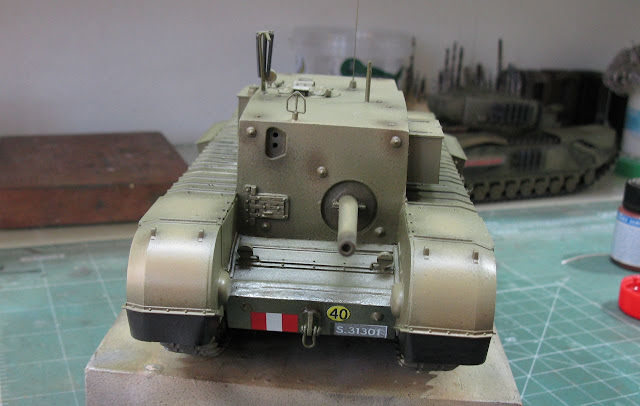 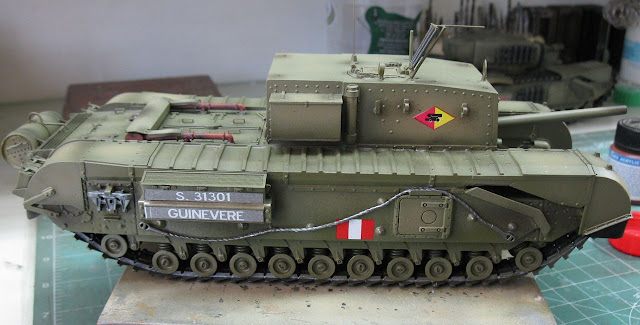 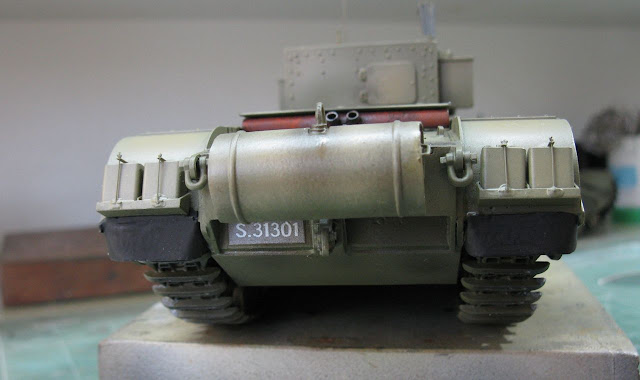 Sealing the decals with Pledge, the "milk of the Mother Goddess." 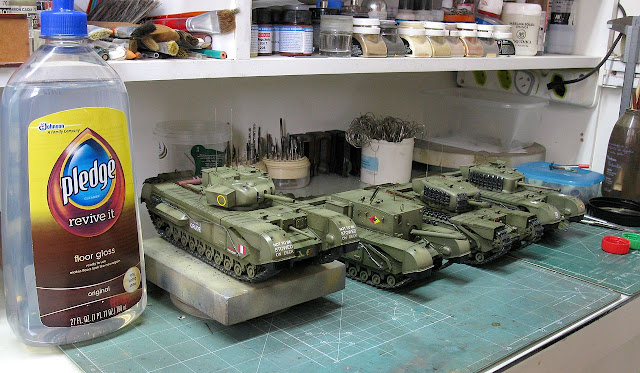 And the girl was ready: this is GUINEVERE, a Churchill 3inch 20CWT gun carrier, working at Lulworth Gunnery School, Dorset - England, in the Spring of 1943. 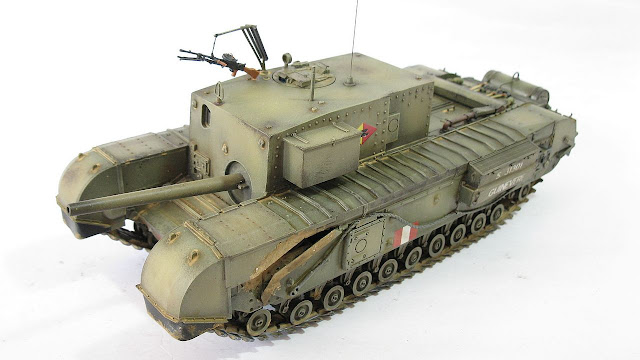 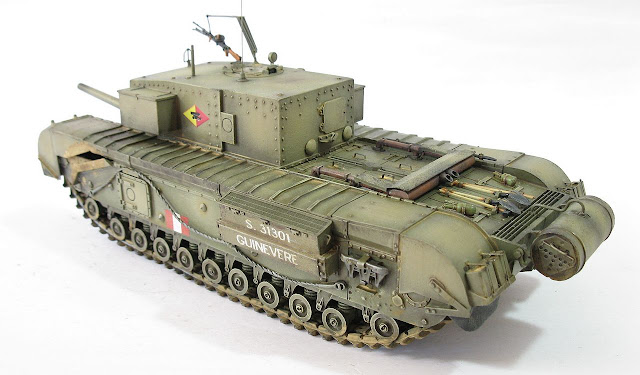 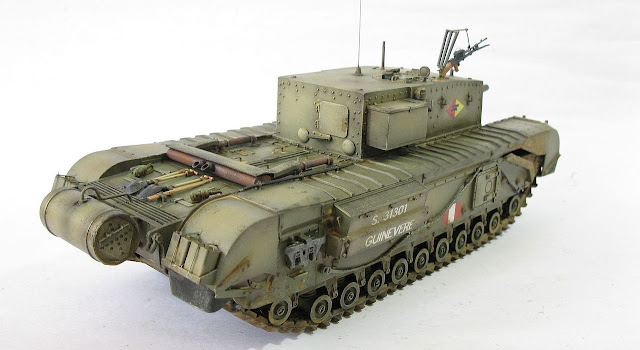 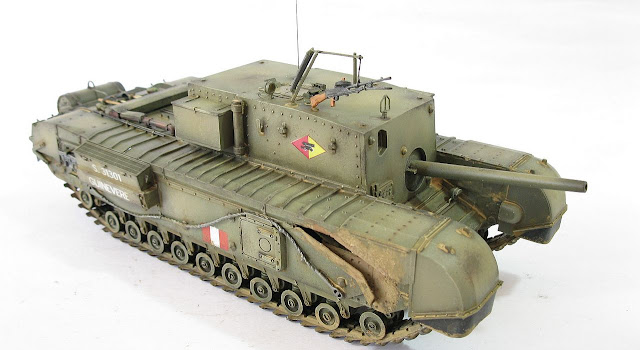 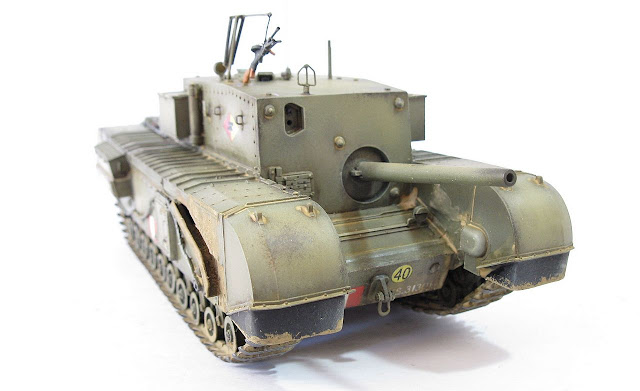 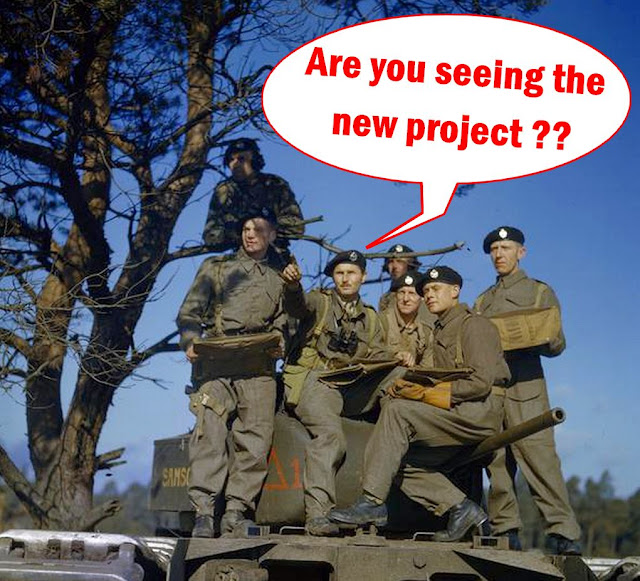