Lads!!!
My new project will be this rare thing, which was manufactured only one unit (and which is known only one photo):  The British Sherman V (M4A4 DV) CDL.
This girl will continue my series of CDL vehicles. I guarantee that will be the most difficult. because the source material is very minimal.
First of all, I would like to thank two colleagues who allowed the completion of this project: Rob Erwin, who provided me a few years ago the resin conversion kit of M4A4 early DV (he was still owner of Formations) and John Tapsell, who provided me historical and technical data of his own research on the CDLs tanks.
History:

The birth of the concept of getting illuminate a nocturne battlefield began a long time ago... In the WWI era, Oscar De Thoren idealized to mount an armoured light in the sponson of a Mk IV Male tank (six tanks assigned to project in 1918 but project abandoned in 1919). But the idea remained...
Three Renault UE Tractors were converted by De Thoren Syndicate in mid 1930s and demonstrated to both French and UK governments (lamp fitted behind crew compartment with generator mounted on trailer) arousing little official interest.
The inexhaustible De Thoren recommended the use of Vickers Medium Tank for pre-war Night British tank and again, the idea was not accepted. British preferred the idea of using light Carriers (Bren carrier type vehicle).
Types of turrets:
Type A- The first prototype CDL turret (Type A?) apparently was designed to fit in A9 cruiser tank. 100 ordered for fitting to Valentines but not produced.
Type B - turret fitted to Matilda,  Churchill and some early M3 american Lees. In the Churchill tanks a special 12 inch high collar had to be fitted to the hull to allow the turret to be mounted
Type C - designed for use on Landing Craft - six prototypes built and 212 ordered (project cancelled after testing)
Type D - reworked Type B turret fitted only to M3 - with welded up escape hatch and pistol port, dummy gun (also internal changes)
Type E - twin lamp turret (1 US version and two British versions)
Type E special stowage - modified US T23 turret converted to mount CDL lamp in the right side of mantlet and 75mm gun M6 gun
Type F - not produced but was a new version of Type D with the escape hatch and pistol port eliminated from the casting
Also was proposal for an 'airborne' CDL. A lightweight version mounted on a Carrier for use by Airborne forces.
Post-war
-Wooden mock-up of Centurion turret with CDL lamp and 17 pounder gun fitted (also a second version that was only a 'paper' project.
-External CDL unit fitted to the side of a standard Centurion turret - full size working model of lamp unit built.
(font: John Tapsell)

As we have seen, several vehicles were tested on the function of illuminators tanks on night battlefields: Matildas, Churchills...But what best fits the function was the M3 Lee / Grant.
Since the M3 tank was becoming obsolete, studies began to develop a CDL turret for installation on the Sherman chassis. The first design, started in June 1943, mounted two arc lamps in a large cast turret. The operator sat in the center with a lamp compartment on either side. Both lamps were stabilized in elevation, but only a manual turret traverse was provided. A single .30 caliber machine gun was fitted in a ball mount near the center of the turret face with a plug type view port on the upper right. A circular escape door was installed in the rear wall of the operator's compartment.
The lighting system of a Sherman CDL consisted in two light projectors that through prisms and mirrors, reflected strong light beams through vertical slits in the front of tower. This permitted illuminate the battlefield at a time that night vision technology in low visibility was crawling. The power of each projector was  13 million candlepower (12.8 million candela) searchlight.
The two lamps required a 20 kilowatt generator which was driven by a heavier power takeoff arrangement from the main engine. One of these turrets was installed on an M4A1 chassis and tested at Fort Knox from May through June 1944. Designated as the "E" vehicle, it also was referred to as the M4 Leaflet, double unit. Two similar vehicles were designed in Britain based on the M4A4 (Sherman V) chassis. The British turrets were assembled by welding, with laminated and casting portions of armour. Were similar in design with a single machine gun in front.

The first Sherman V has a turret with a single operator. This vehicle was built and tested.

The second British turret would have 2 men, with a bustle which provided a seat for the tank commander above and behind the CDL operator. This second project It was never built.
The tests in Britain and at Fort Knox showed the new CDL to be much more mobile than the M3 version. its armor protection was better, but the lack of a heavy gun was the deciding factor, An essentially unarmed armored searchlight was considered a waste of good tank chassis and no further vehicles were built. To correct the shortcomings of the "Es" vehicle, a new CDL design based on the Sherman was started in May 1944. Designated as the"E vehicle with special stowage", it mounted a single light unit coaxially with an M6 lightweight 75mm gun. But this is an another history... 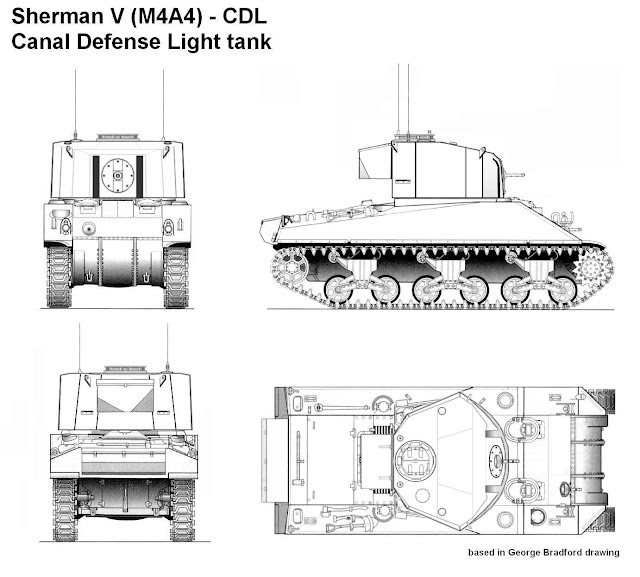 Kit:
For this project, I'll use the fantastic conversion kit for M4A4 DV from Formations:
The British turret It will be built in scratch, based on photos and technical reports. Unfortunately, the only known photo is the one that heads the article.
In my opinion, the turret got too tall. I will remove the rear bustle and lower the roof. I'll cut the plastic with my Dremel with saw disc.... 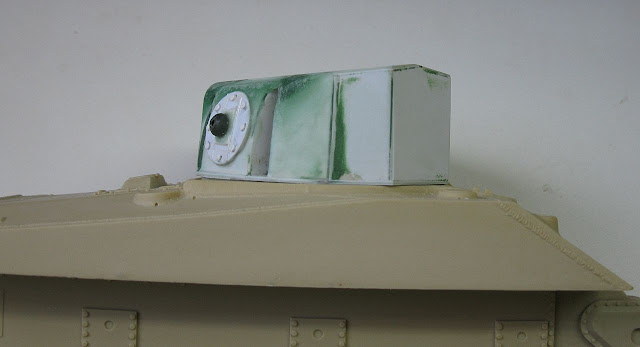 After that, I painting the turret and hull with white primer to unify the vision and detects irregularities ...
And...Bronze green Vallejo: 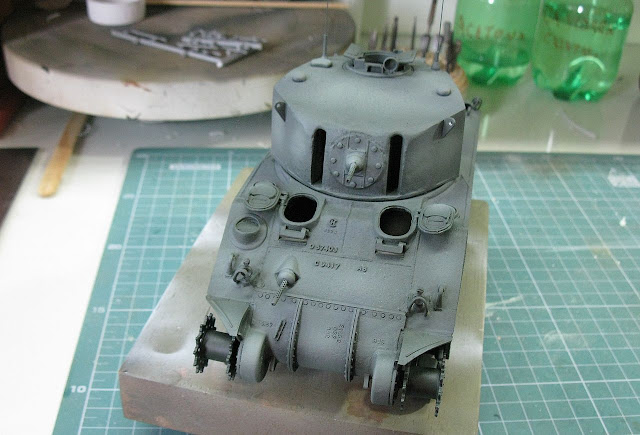 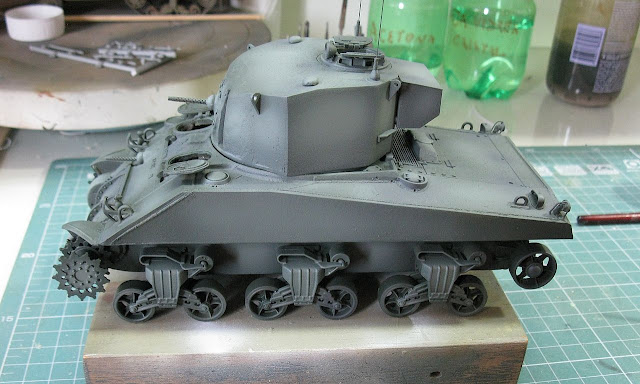 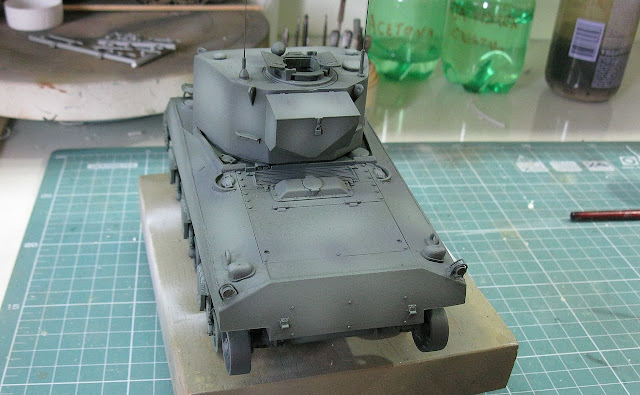 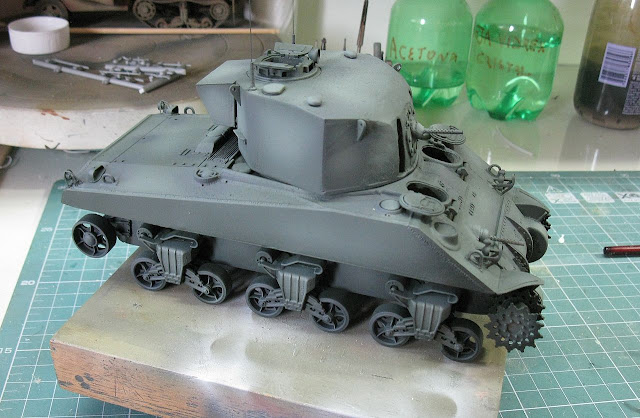 Markings: as usual, I drawing a profile as reference (I allowed myself a certain artistic freedom): 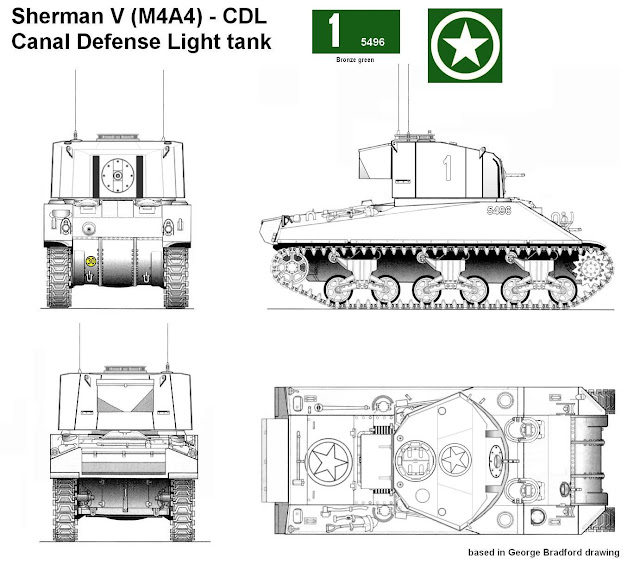 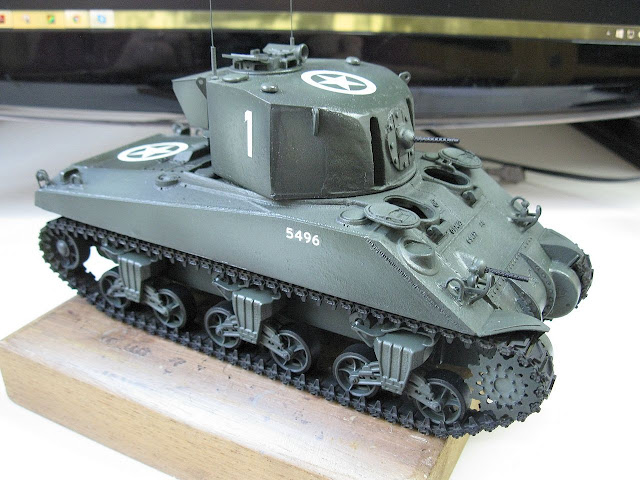 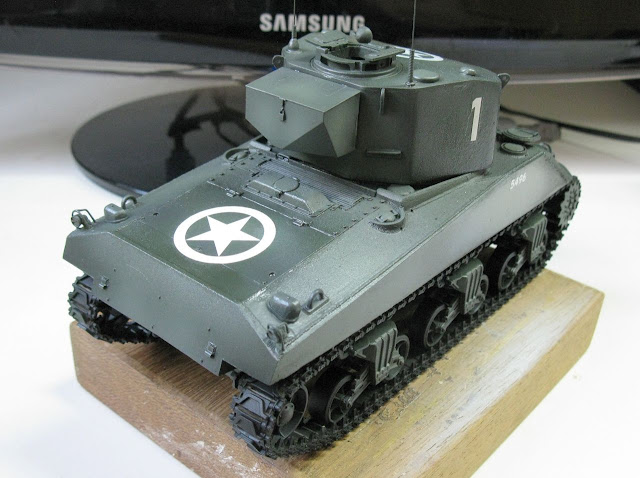 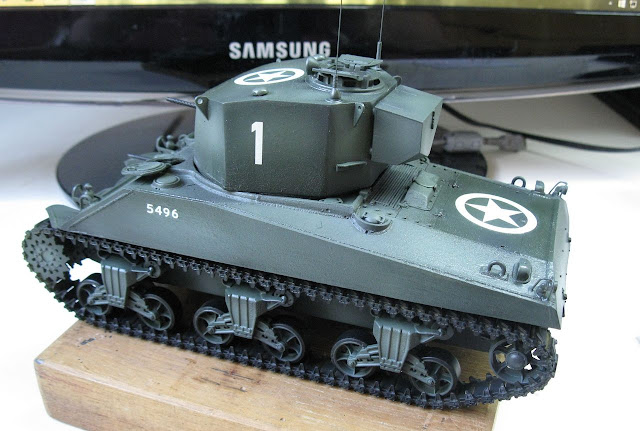 And the Girl is ready: 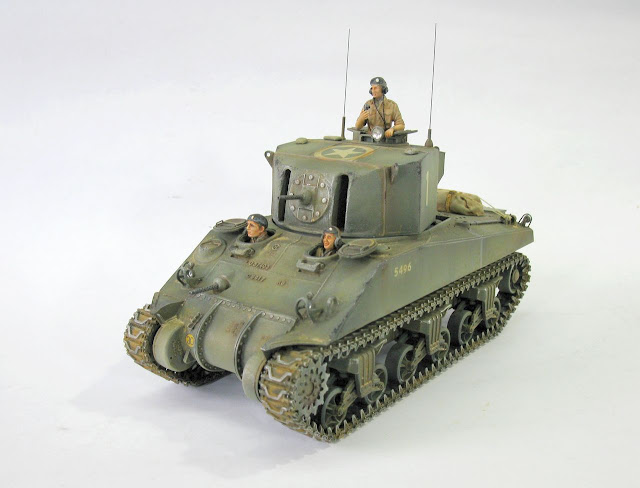 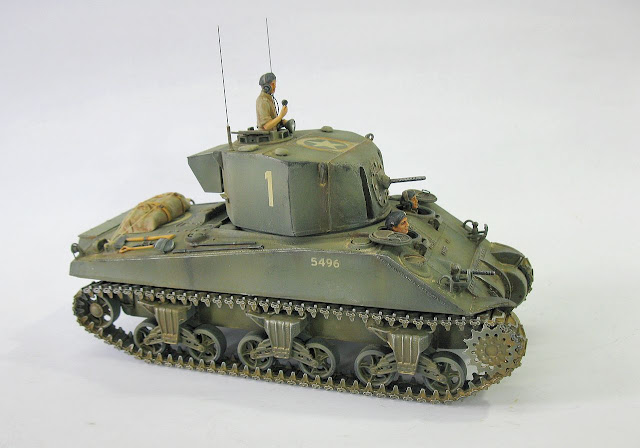 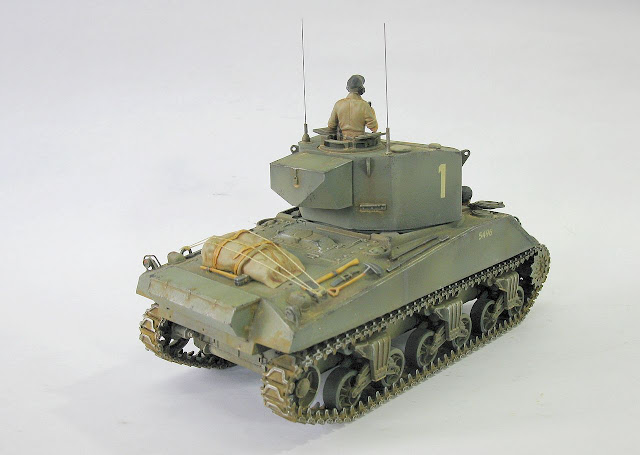 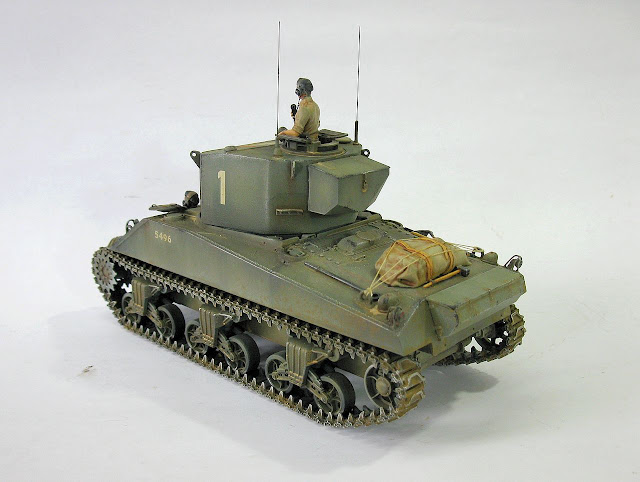 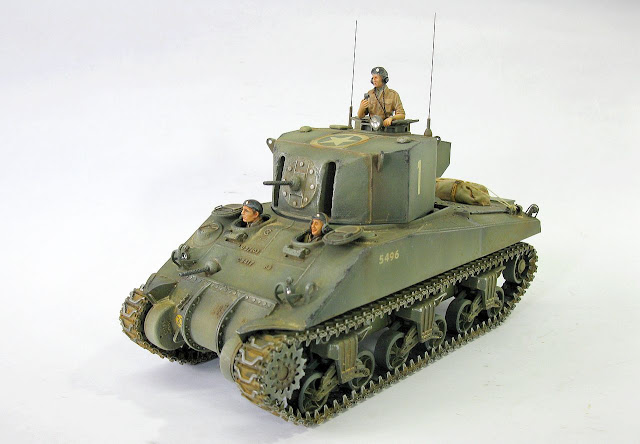 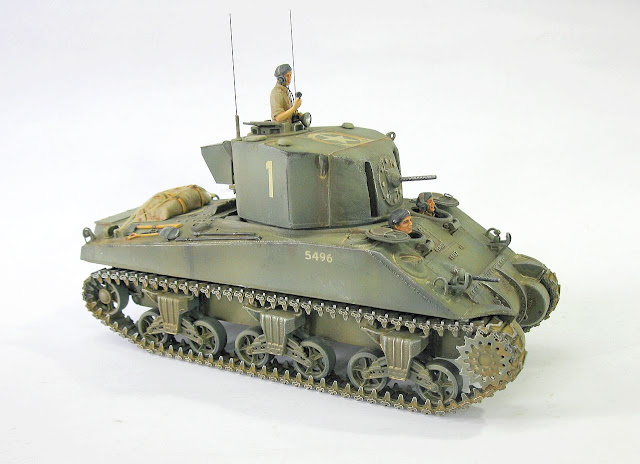 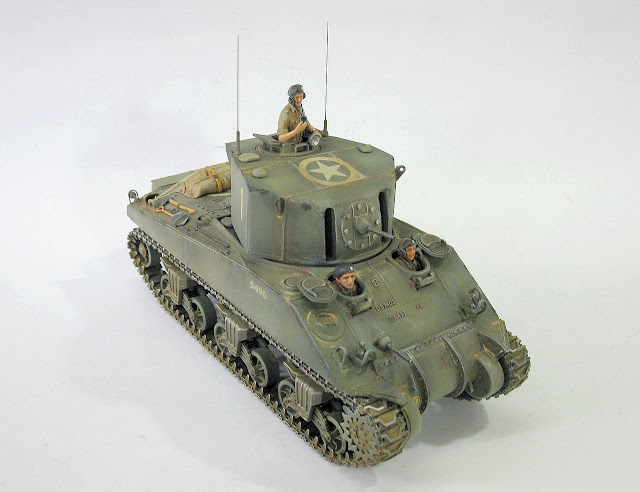 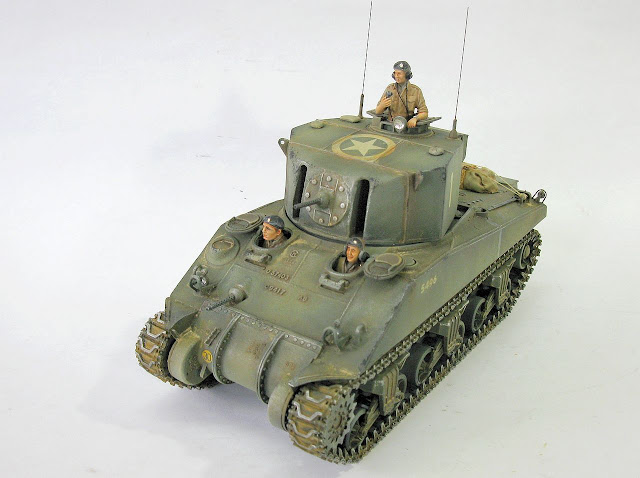 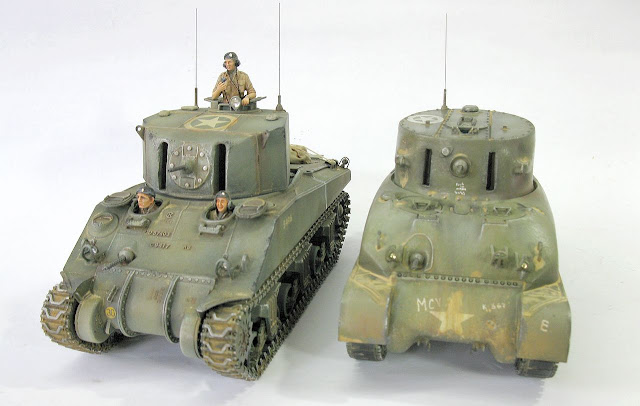 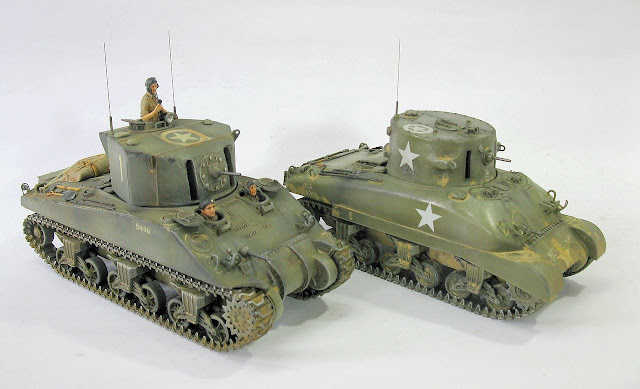 Thanks for following, boys !!! 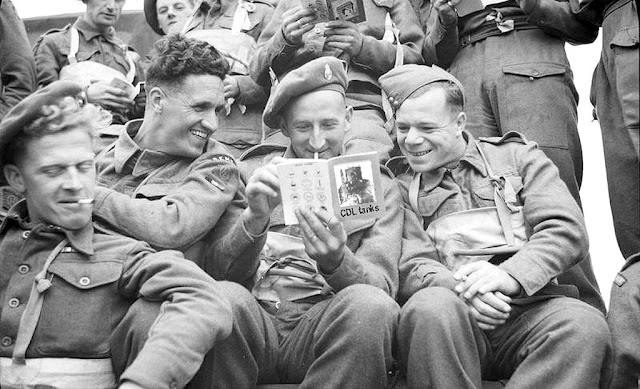