Soldaten!!
This article is about a strange German vehicle, not very well known by the majority. An ugly, unorthodox vehicle, years ahead of its time in some mechanical characteristics. We are talking about Tempo G1200 4x4. 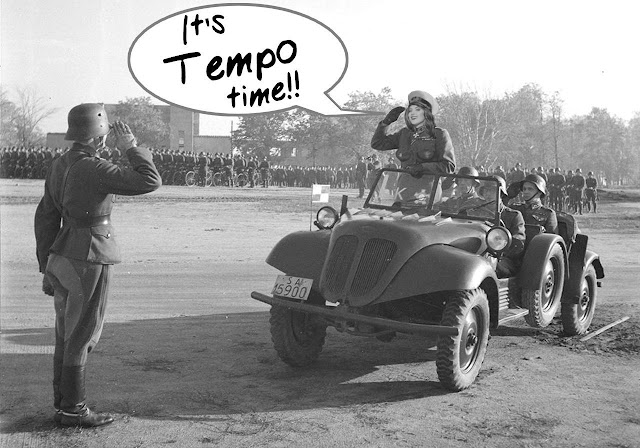 History:
Built as a private venture by Vidal & Sohn of Hamburg for the German Army and exportation, the Tempo G1200 was mechanically complex for its time, and-for a vehicle that was designed in.the 1930's it was remarkably advanced in some aspects in his design.
In 1924, Oskar Vidal and Sohn founded Tempo Werkes of Hamburg, starting the operations building motorised heavy duty tricycles. These weird little 3 wheeled delivery vehicles proved to be extremely robust and with the popularity of these vehicles, the foundation of the company's was a success.

By 1934, the Army Department approved a plan for standardization and unification of military vehicles, according to which the Wehrmacht was supposed to create a family of all-wheel drive standardized cars "Einheits-Personenkraftwagen". In 1935 the company Vidal & Sohn Tempo-Werk GmbH , based in Hamburg presented to the German Army the project of a Tempo G1200, but the Germany's armed forces did not show great interest in this vehicle, being a very few were used in second-line services like in Border Guards duties, and few units in the SS, Luftwaffe and the Kriegsmarine.
The Tempo G1200 was in competition with many other German light field cars produced by manufacturers such as Adler, BMW, Horch, Mercedes-Benz, Steyr, Stoewer, but never saw widespread use with the German Army during the war. I found only one picture of Tempo G1200  with German markings:

Maybe due in part to the relatively small numbers produced, but in reality it was never as good a vehicle as many of the others and more complex to build and maintain. His 2 stroke engine did not please the German military at all. But what the Germans looking as a disadvantage was actually an enormous advantage, since 2-stroke engines suffered much less with the freezing temperatures of winter because the engine's lubricating oil was part of the fuel mixture. The Scandinavians apreciated this particularity and the Germans bitterly repented when they faced the Russian "General Winter" with their 4 stroke engines with frozen lubricating oils in their cars, tanks and trucks!!!

The vehicle was perhaps a little unusual in that it had two transversely mounted engines, one at either end of the vehicle, with driver able to use either of the engines separately or both engines together to give maximum four-wheel drive off-road performance. The designer of the strange car was Otto Daus, an aeronautical engineer and pioneer of German aviation ( 18?? - 1976).
However, the tiny ILO 594cc twin cylinder, 2-stroke petrol engines can not exactly be called as providers of large amounts of energy, with its rickety 19 bhp's.
Further technological advancements included four-wheel steering, rotating central spare wheels either side of the body to aid cross-country mobility and a highly agile suspension system based around a central 'spine', which allowed the vehicle to attain some incredible axle articulation.
Altough built in Germany, the Tempo G1200 was marketed widely and produced primarily for export in the years leading up to World War Two. Vehicles were supplied to more than forty countries around the world, including the likes of Brazil, Denmark, Sweden, Hungary, China, Chile, Finland, France, Mexico, Romania, and of course, Germany, with Sweden being one of the major users of the type. During the Second World War, the Tempo G1200 was used by the countries that bought them and  by the Germans as a scout car, reconnaissance and light staff car.


In 1943 the German military and political leadership decided to stop the production of non-essential vehicles to the war effort and since they were not used by the first line of German Army, its production was interrupted. In total, between 1936-1943, 1243 vehicles were produced in Hamburg and a few others were assembled in France, being the last produced in 1944.

Description:
The Vidal Tempo G1200 is perhaps the most bizarre second-world vehicle. The four-door open car body was based on a central tubular frame (like a spine) and had similar front and rear parts, under the hoods of which were 2-cylinder 2-stroke engines with a power of 19 hp each.
Each of the engines had its own gearbox and brought its own pair (front or rear) of the wheels to an independent spring suspension. In this case, the driver could use only one engine (for driving on roads in economy mode), or both at once, to improve the (little) potency.
The two engines also had two separate fuel tanks: the front has 32 liters and the rear one 27 liters ( total 53 liters). With a single engine running, the average fuel consumption was 9.2 liters per 100 km and with both engines operating was 12,6 liters per 100 km. With both engines running. the Tempo reached the top speed of 68 km / h. See the video below: Notice the characteristic amount of smoke that these 2-stroke engines release through the exhaust. These little girls were very brave !!!


And the amazing performance in this original Tempo G1200 finely restored in a cross-country ride. Notice the nice noise of your two-stroke engines and how the suspension moves ...

One of the most interesting features of this vehicle is that the rear wheels also turned when the driver steered the steering wheel. The rear wheels turned in the opposite direction of the front, reducing the steering radius.
To protect against weather, the vehicle was equipped with a folding canvas hood. The vast majority of the vehicles of the military version left the production line with the open canvas and weighed 1160 kg.
A very small number of cars were produced with a closed body (in particular, cars intended for operation in cold climates in the Scandinavian countries), resulting in their mass increased to 1450 kg. These vehicles were usually designated as staff-cars.

The cars were equipped with side, freely rotating spare wheels that acted as support rollers, to improve cross-country cruise in complex terrain, to overcome vertical obstacles, cross ditches or trenches.
The car could ford without preparation a depth of up to 60 cm. There were versions for 4 seaters (more common) and an extended version for 6 passengers (rarer).


As my project will represent a vehicle from Finland, let us know a little more about the use of this little beast in the cold Northern Territories:

Tempo Vidal G1200 in Finland:
The Finnish army made a purchase of Tempo G1200s in 1940. They saw service during the Winter War (1939-40) and in the subsequent Continuation War (1941-44) as reconnaissance and transport vehicles, where they performed well in the tough conditions. One could argue that the conditions in Finland during its eastern war were exactly the kind of conditions the car was designed for... In Finland, this small off-road was known as "Hyry-sysy" (= Hurry, or Ride-Suzie car).
Its independent suspension and four wheel drive traction allowed it to cross rough and broken ground. Four wheel steering allowed it to navigate through tight forest tracks, and its twin two-stroke engines allowed it to run in sub-zero temperatures where other vehicles engines' froze (a problem the Russian's encountered in the 1940 Winter War). 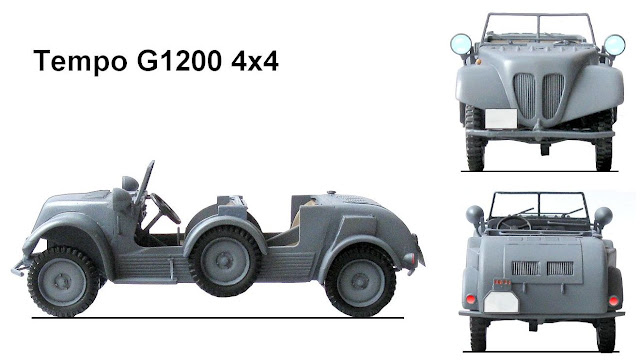 The kit:
The only option in 1/35 scale (until now) is the resin kit (#091) Tempo G1200 casted by czech Plus Model. The kit is multimedia with resin parts, metal, photoetched  and decals.


After use the cyanoacrylate with steady hands, eyes of eagle and nerves of steel, I fixed the disaster:
Well... But is no time to lying on the laurels of victory. It's time to suffer !!! and in resin, to suffer is to remove the excesses of casting of the pieces... It is now that my  (loved) Dremel will justify its purchase !!! 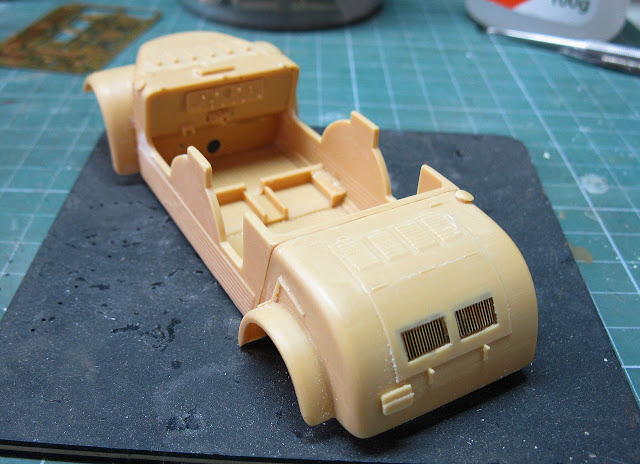 The headlights of the kit are well made, but have no lenses ... I have a set of headlights that I bought in a Galaxy far, far away, a long time ago. It's a Russian kit from Elf production of model accessories: 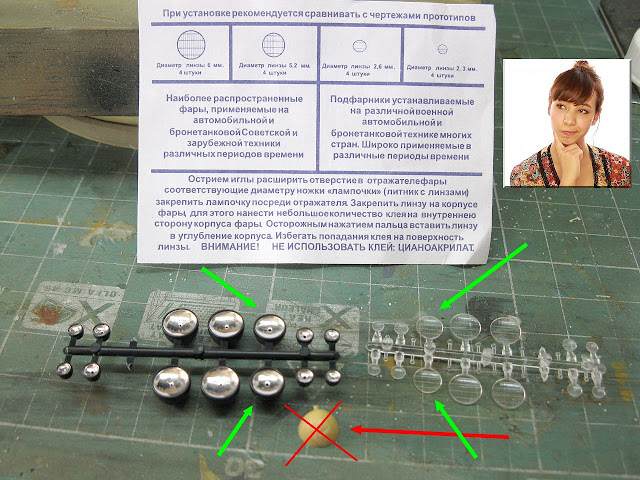 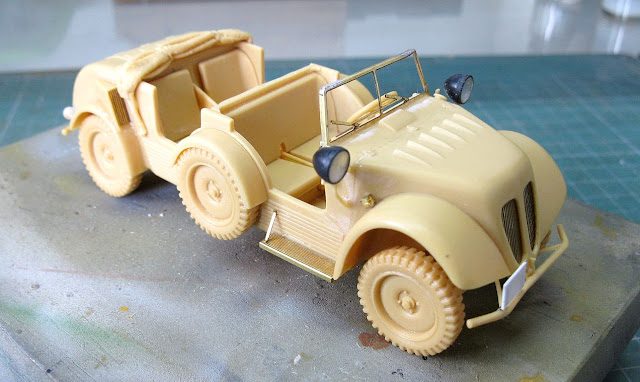 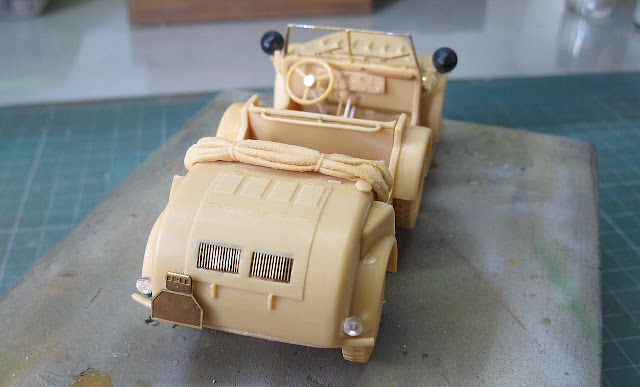 I chose for my little girl the colors and markings of Finland, as they were much used by this brave people in the Winter War and the War of Continuation.

After of researching in books and on the internet, the question of the colors of this vehicle were even obscure ... I found opinions of panzer-gray, being made by the Germans and opinions of dark green, which was the color of Finnish armor at the time.
After much discussion and mainly with the opinion of colleagues in Finland, I opted for panzer-gray. 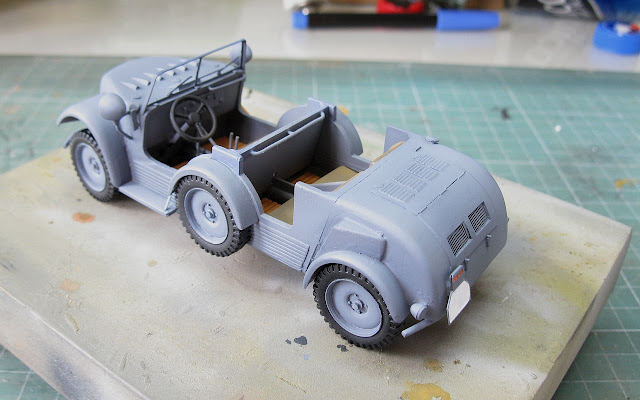 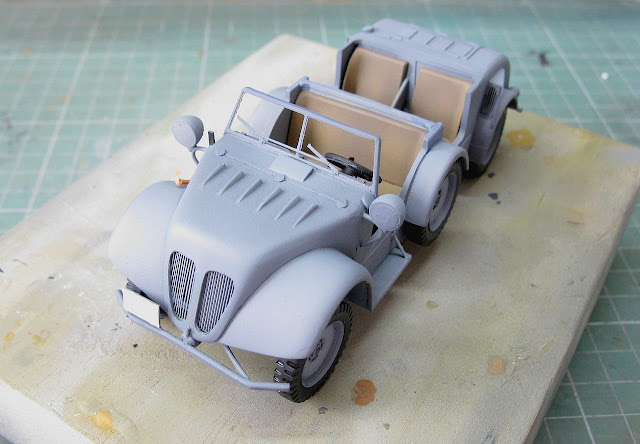 My Tempo will proudly represent the Command vehicle of Gen. Ruben Lagus, Commander of Finnish Armoured Division - Jäger Battalion of Finnish Army, in parade at Aanislinna city (Petrozavodsk), in 1st October of 1942, in Finland.
After presenting this vehicle on social networks, asking about colors and markings, I had the help of several colleagues who provided valuable references, especially Jukka Purhonen, who provided us material about the colors of numerals, license plates and Finnish pennants, from that time. For example, the license plates were yellow:
Jukka also provided us a photo of what could be the markings on the rear of Tempo:

Another detail of  Jukka's help: the colors of Jägger units pennant :
Thanks a lot, Jukka Purhonen!!!

Let's call this particular vehicle of "Yellow 8".
The decals for "Yellow 8" are simple, with yellow licence plates (front and rear) with black letters, the number "8" in yellow, reproduced bilaterally on the front fenders, below the roots of the windshield and in the rear of the Tempo. The letters LK (?) in yellow on the right windshield and in the rear (see pic above). The decals of black letters and numbers of license plates I do myself  in my Laserjet Printer, but the yellow markings I will have to order at Sirap, which will take a little time ... I already did the drawings in Corel Draw, in the 1/35 scale... So this project will suffer a short stop ... But it is brief !!!
As usual, I like to do an art with markings references: 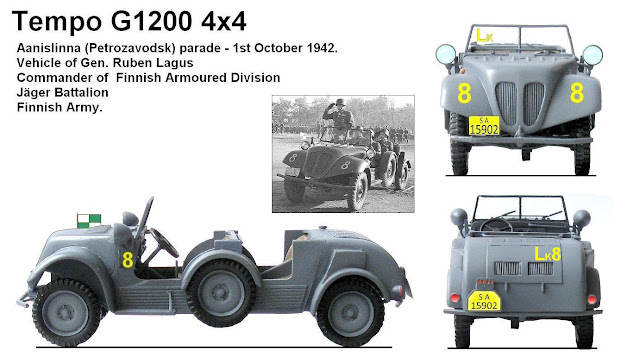 And after a long time (for me and Kojak...), the vehicle was ready for action, after the decals arrived. 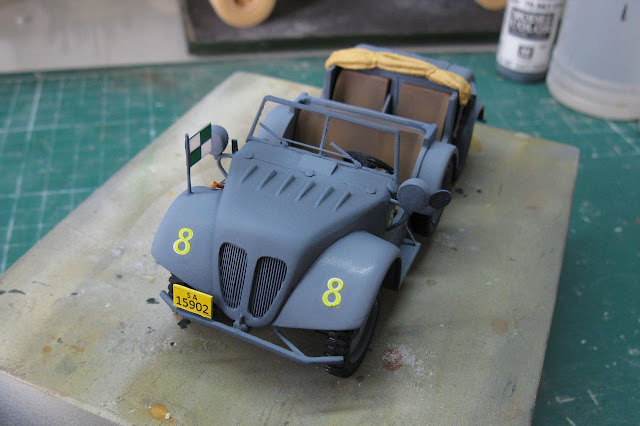 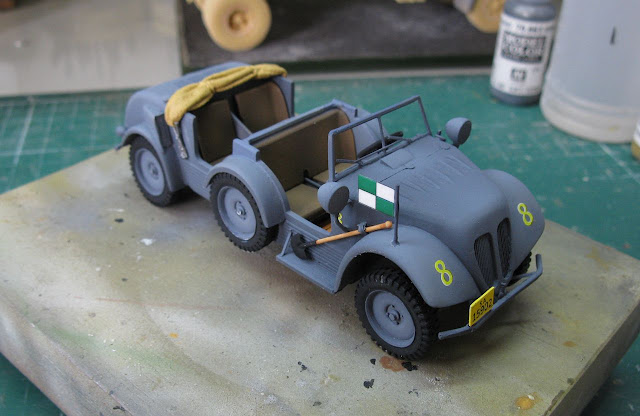 I did a very light weathering and kept the vehicle relatively clean as it represents the commando car in a military parade. And the General Lagus was extremely strict with his troops and his equipment. With you, the Tempo Vidal G1200 4x4 light scout car. Finnish Armoured Division - Jägger Battalion - Finnish Army - Petrozavodsk - October 1942. 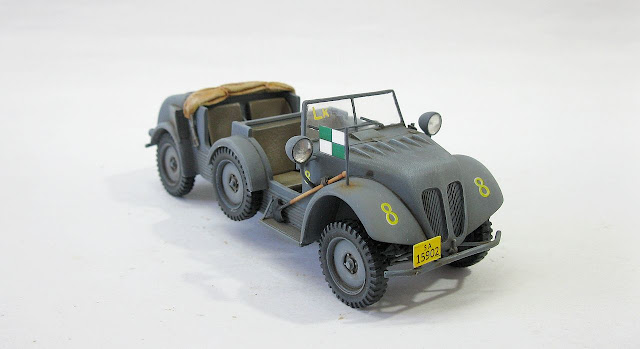 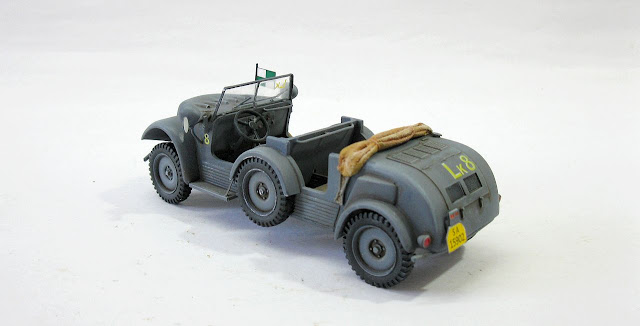 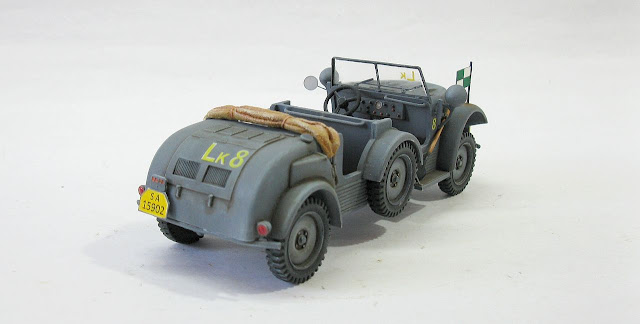 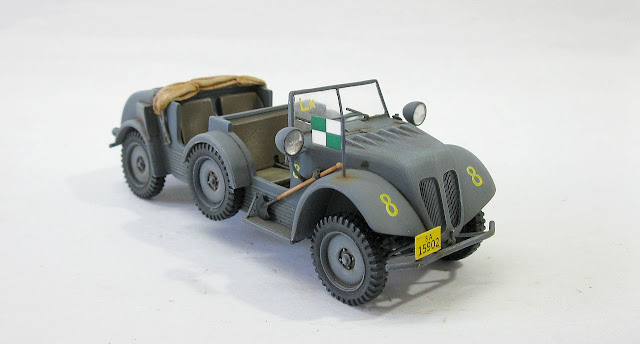 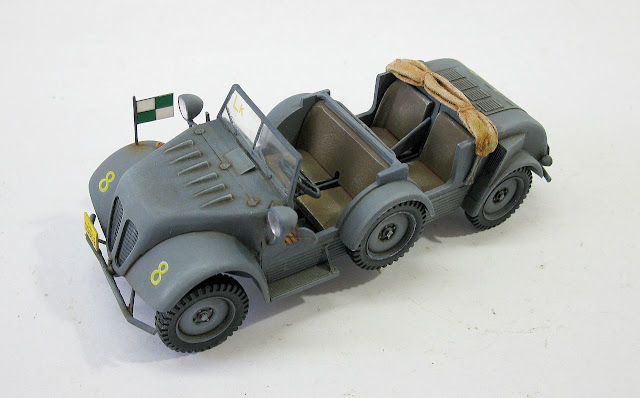 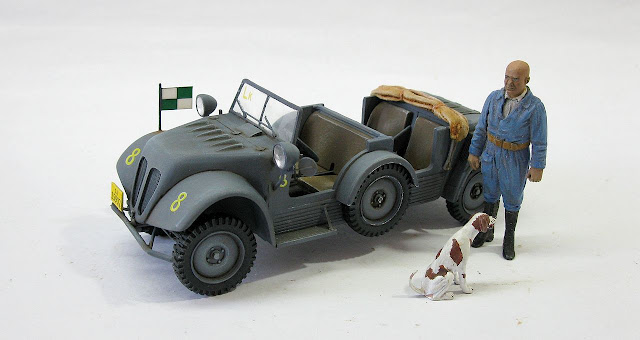