Kamerad LKW-Fahrer !!
Today we will see the history of one of the heavy trucks of Germany, built in the WWII years: the Mercedes Benz L6500 4x2 heavy truck tankwagen (tanker version).
History:
The saga of the Daimler-Benz, owner of the Mercedes-Benz brand, is intertwined with the history of the automobile, from its beginnings. It all started with Gottlieb Daimler and Wilhelm Maybach in Cannstatt, Germany, 1882, developing various types of engines and experimental vehicles.
These initial works presented the first practical results in 1884, with the advent of the "Grandfather Clock".
This engine was characterized by generating one HP at dizzying 600 rpm, when the normal engines of that time were mere 120-180 rpm's. These engines were installed in various vehicles, such as a motorcycle Reitwagen in 1885 and culminating in the Daimler automobile in 1886, the world's first car.
The Daimler car was a quadricycle with the basic features of a car, while the vehicle of Karl Benz, another car pioneer who would later become part of the history of this great brand, was a tricycle.

After 10 years of the releasing of its automobile,  the first Daimler truck was manufactured in 1886, with Phoenix two cylinders engine, 1100 cc and 04 HPs of power, with a weight of 1200 kg and capacity of load of 1500 kg. Daimler-Motoren-Gesellschaft, from Cannstatt (DMG) made the world's first truck.
Meanwhile in 1897, Emil Jellineck, a very prosperous insurance trader who was passionate in speed, goes to Cannstatt to order a two-cylinder Daimler. This transaction would be the beginning of a Jellineck representation across Europe of the special Daimler vehicles with four-cylinder and high-performance engines, which would be called the Daimler-Mercedes. The name Mercedes is due to its daughter, Mercedes Jellineck.
The pioneering spirit of these men made them collect other achievements, such as the construction of the first bus, the first gasoline-powered truck, and the world's first diesel truck. Daimler and Benz's work in Germany resulted in the formation in 1926 of Daimler-Benz AG.

The Mercedes Benz L6500 heavy truck:
At the end of the 30's, the fleet of commercial vehicles in Germany rose by about 150%. Daimler-Benz, with the Mercedes Benz L6500 participated in this growth. This vehicle was a 4x2 heavy-duty truck with its characteristic long hood housing a six-cylinder in-line diesel engine with 12,528cc of displacement, generating abundant (for the time ...) 150 HP of power at low turns with stunning torque. They were roadside vehicles, with very poor performance in off-road conditions.
These heavy trucks served throughout the War, attached to the Grosstransportarium - GTR (Comprehensive Transport Service) from 1939 to the end of the war, including the Reconstruction of Germany.


The Mercedes Benz L6500 description:
The Mercedes Benz L6500 was a two-axle truck and has a U-shaped ladder frame with front and rear rigid axle. The axles are suspended on half springs, the front axle is single-masted, while the rear axle is equipped with twin tires. The tires have the size 12-22. Steering is done with a steer steering system from ZF . On all wheels with Trilexfelgen system there are hydraulically actuated inner shoe drum brakes, which have a compressed air support (brake servo). The handbrake acts on the transmission. From the engine, the power is transmitted via a multi-disc dry clutch on the transmission with four gears and additional gear. The L6500 is only available with rear-wheel drive (4x2).
The engine used is the OM 57 . It is a six-cylinder  diesel engine with water cooling and overhead valves , which has a capacity of 12,517 cc. The underlying camshaft is driven by the seven-bearing crankshaft via spur gears. The fuel is injected into the prechamber by a Bosch injection pump. Vehicles at the Wehrmacht had a throttled engine.

My version:
As usual, I like the unusual versions for my collection. I choose built the Tankwagen version for this time. I'll just make the truck in this project ... who knows in the future I'll do the trailer ...
I manipulated the photograph to show only the truck:
I'll use this kit:
Unfortunately, I have the rounded cabin version in my stash. I did not find a specific photo of this version, but ... who knows ?? And honestly, I do not want to spend a few euros on buying the "correct" version ...
I drew a profile as a guide to do this conversion ...


I choose built my truck with nose closed... But the kit don't come with the lateral engine panels. Time to scratch...First of all, the real details:


The Mercedes Benz L6500 tankwagen had a metal sub-chassis to support the tank on the main chassis. Time to remove the wooden sub-chassis from the cargo version. Time to use Dremel and be very careful. 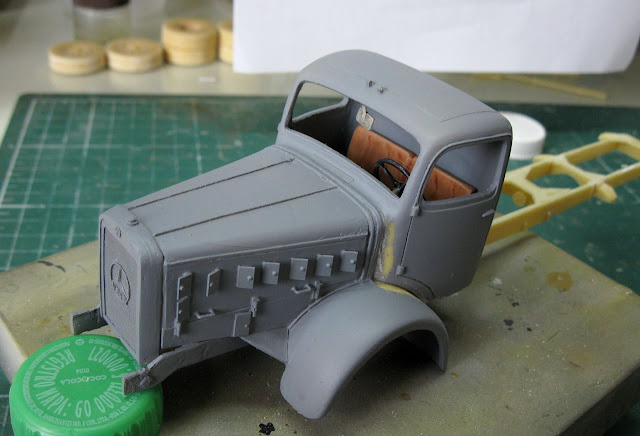 To make the fuel tank, I use the lamination technique: I cut 4 rectangles of 1mm thick plasticards. I glued with PVA glue the templante in the front of the 4 plasticard plates and glued the 4 plates with each other with glue drops in the external angles of the set, because with the preparation of the pieces, these areas will be eliminated.

The cutting of the plates will be performed by the abrasive tool of the Dremel line. The advantage of using these abrasive tools is that they generate heat that helps "adhesion" between the plates, on the scorched edges ...
The cut (perpendicular to the plates ...) was executed keeping the areas glued as long as possible. This ensures that the four parts are dimensionally identical.


Before removing the last two areas previously glued, apply cyanoacrylate (super glue) in opposite areas and in a very small amount, so that the glue does not deform the pieces in the future separation of plates ...

A trick: Before glue the top and bottom, I rounded up the larger plasticard plates by heating the two styrene plates in boiling water and applying the plates against cans of cold beers, positioned side by side. Compress the softened styrene plates onto this "cold cylinder" to conform the plastic in curved aspect. Then, I  recommend to drink the beers (to relax the tension of the procedure ...)

Time to make the four straps securing the tank to the sub-chassis:
And the details are adding up:

Some details in the process of "militarization" of this heavy tankwagen: 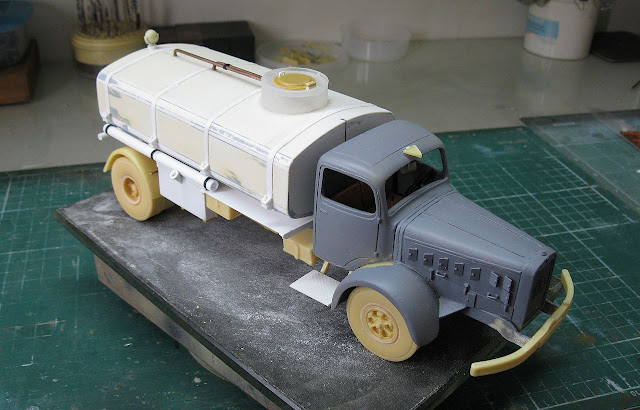 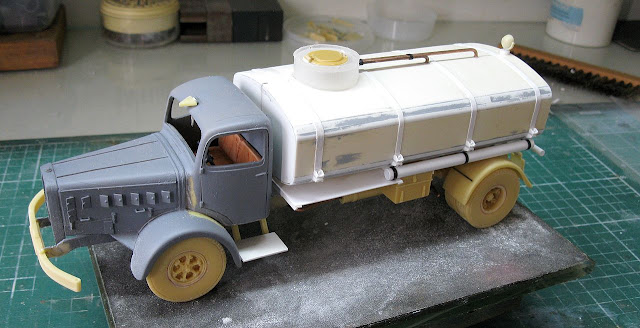 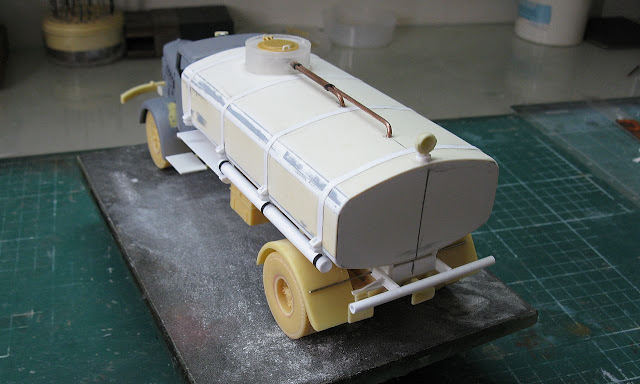 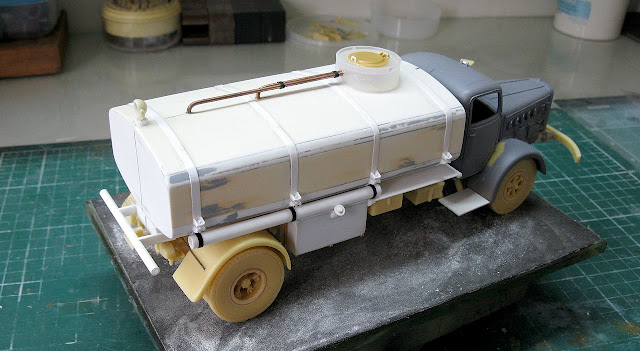 And the Big Mercedes is ready for painting: 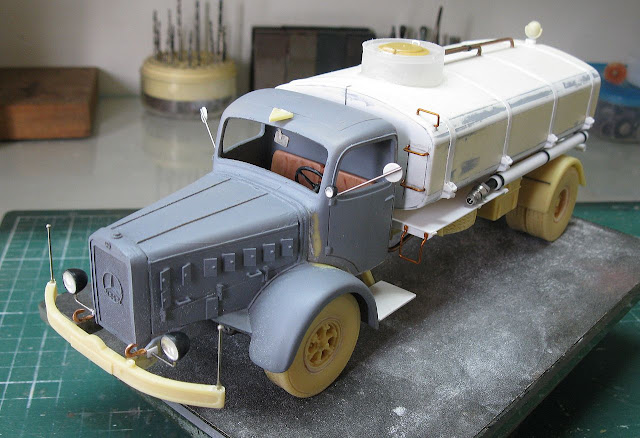 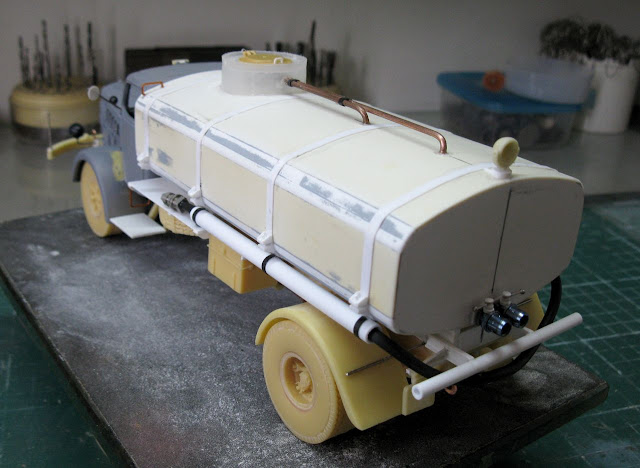 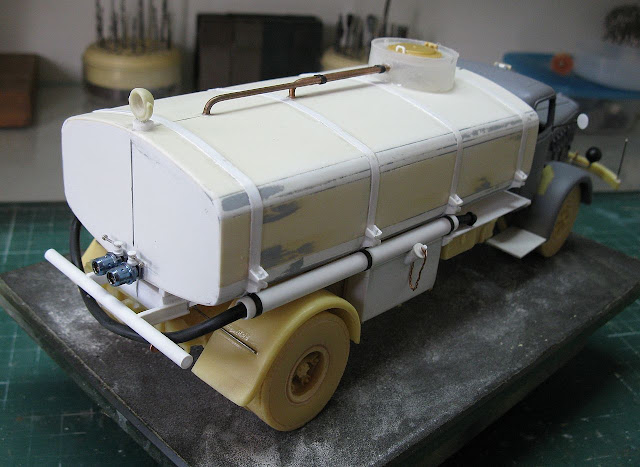 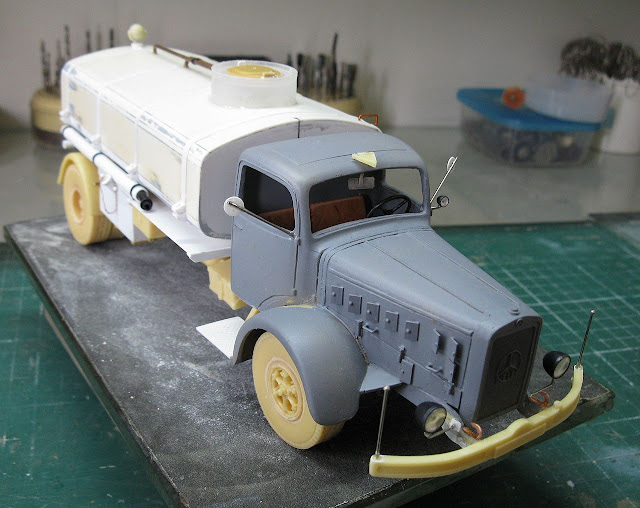 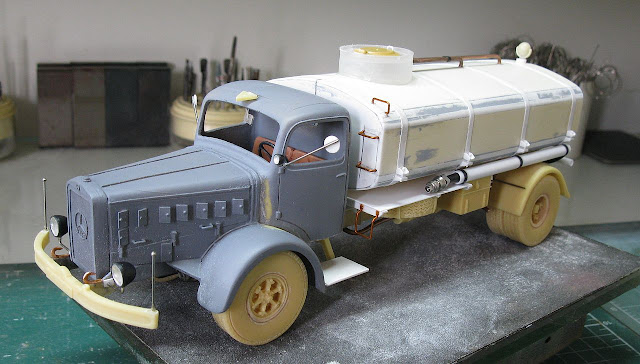 The Mercedes Benz L6500 heavy trucks were vehicles that did not do well on rough roads or in the open field. Essentially, it was a vehicle for paved roads. Based on this premise, I will situate this vehicle as an aerodrome supplier, in airfields situated in rear and "quiet" theaters of operations. As it was a large capacity tanker, it should supply fuel to large multi-engined aircrafts. So this big girl will proudly show the colors of the Kampfgeschwader 40 (KG40), which operated his Focke-Wulfs FW-200 in France, 1941, that generated a real scourge on the ships of the Atlantic convoys ... 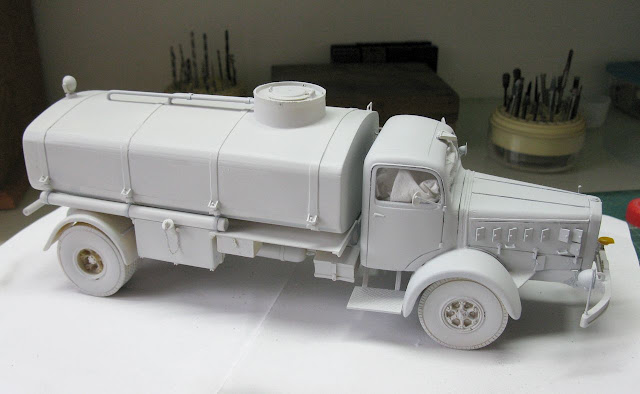 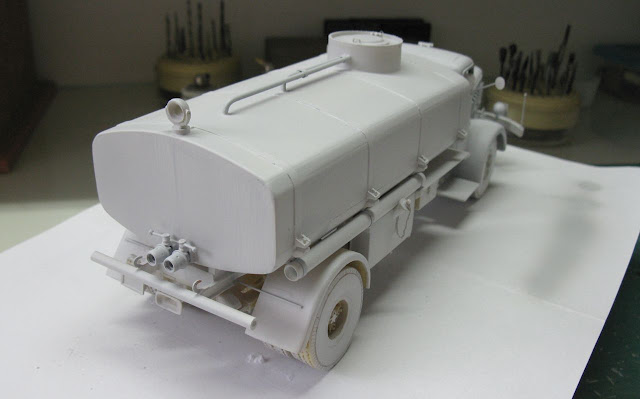 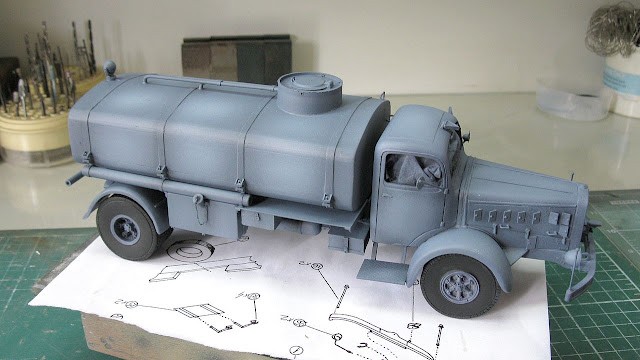 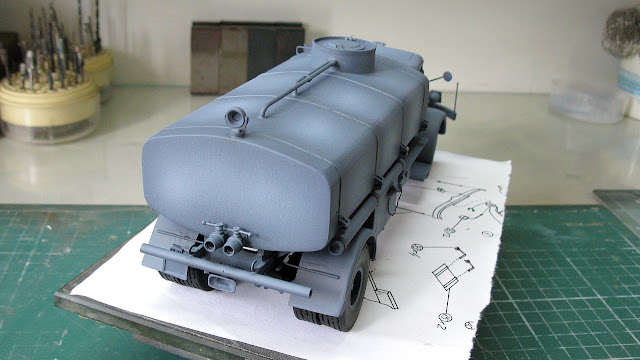 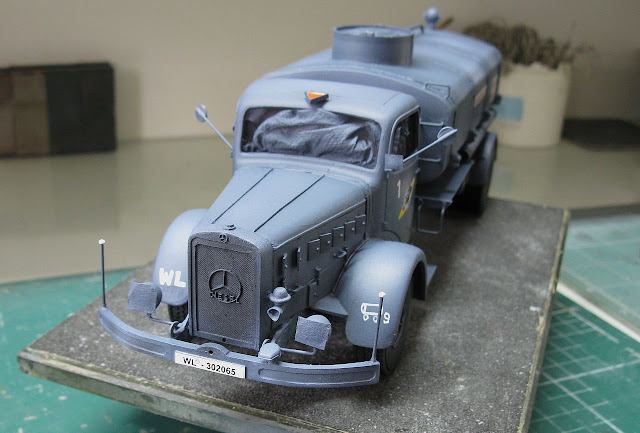 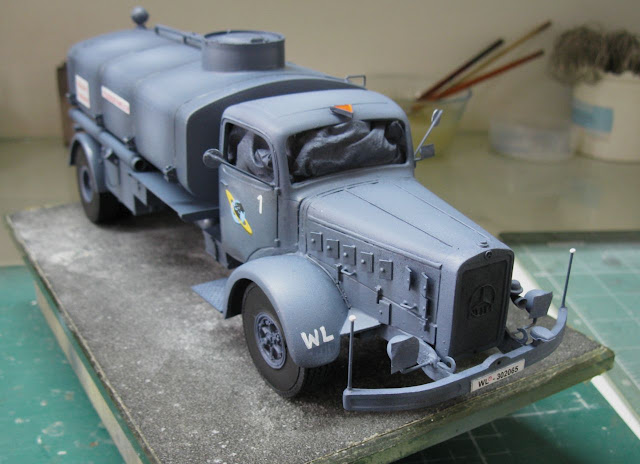 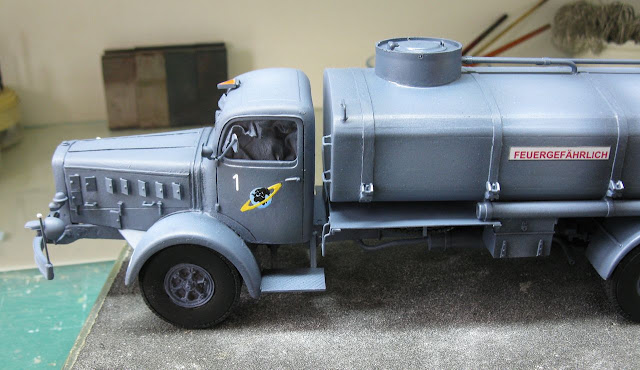 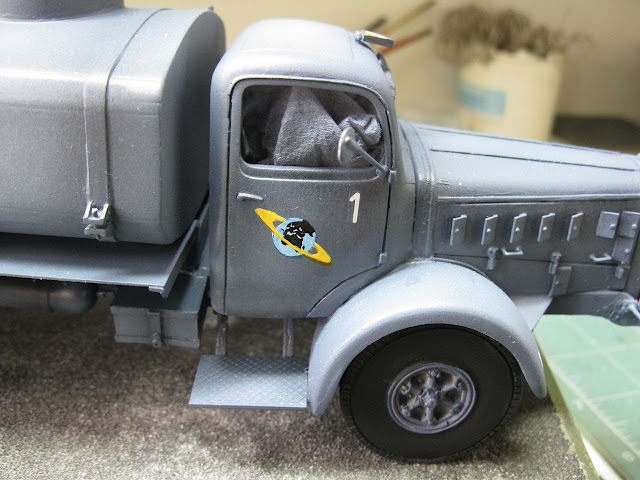 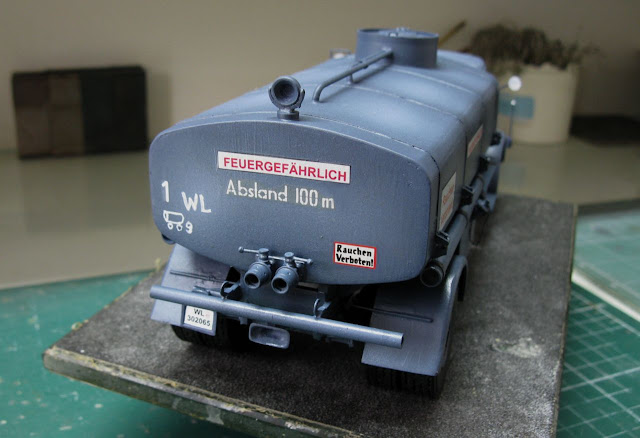 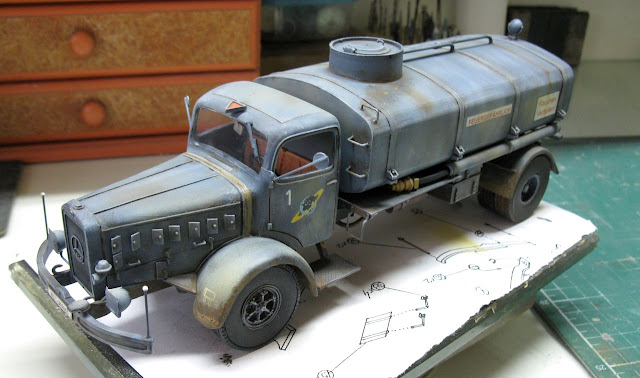 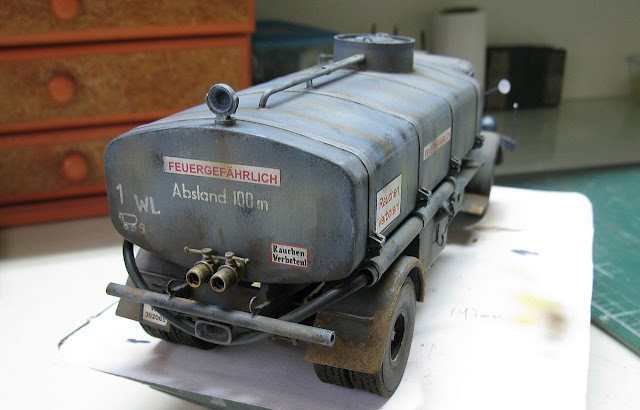 And the girl was ready: Mercedes Benz L6500 4x2 heavy truck Tankwagen, vehicle number 1, refueling the aircrafts of Kampfgeschwader 40 (KG40) at Bordeaux-Mérignac, France, in January of 1941. 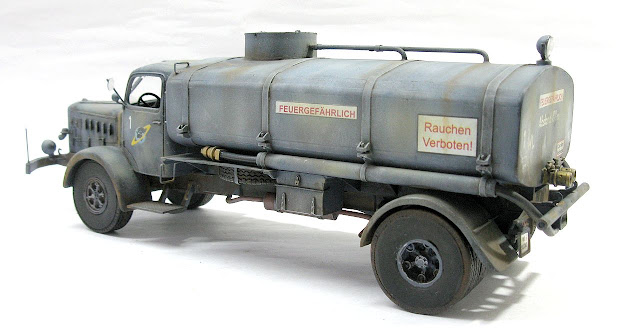 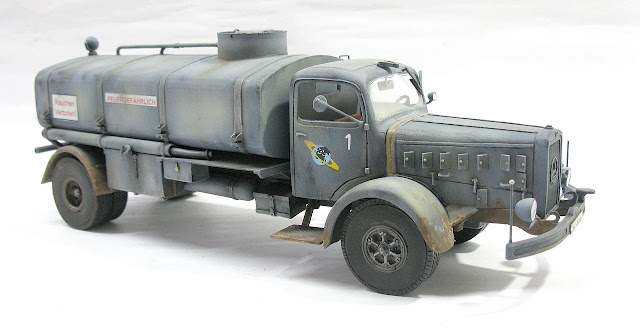 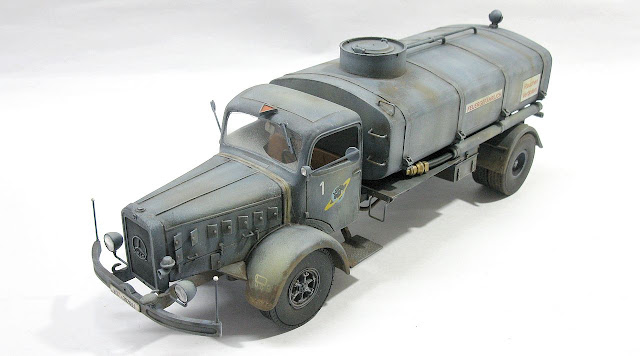 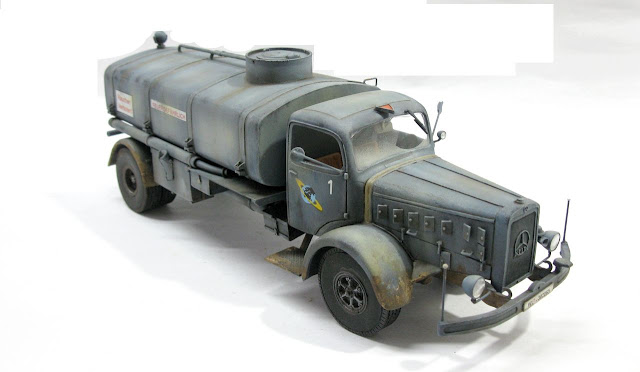