History:
The Churchill tanks, formally designated as "Tank, Infantry, Mk IV (A22)", were an evolution of the infantry tank design that stressed on having heavily armored vehicles to support troops for trench warfare. The parent design, A20, was abandoned in 1940 after witnessing the German conquest of France, and a newly reworked A22 design was submitted in its place in Jun 1940. With the need to replace lost vehicles in the French campaign, the United Kingdom War Office accepted the new design almost immediately, requesting that it would enter production within a year. In Jul 1940, the design was finalized, and the first prototypes were built in Dec. Production began in Jun 1941.
Because Churchill tanks were designed to support infantry and not necessarily to battle other tanks, they were heavily armored with flat plates, which were not designed to deflect high-velocity tank gun rounds. The armor plates were bolted on and later welded. They had 11 bogies on each side, each carrying two 10-inch wheels; the great number of wheels meant that they could actually operate nearly normally even when some of the wheels became damaged in combat. They were the first tanks to be equipped with Merritt-Brown gearboxes, which allowed them to be steered by changing the relative speeds of the two tracks. They were each equipped with a light 2-pounder gun against enemy vehicles and a 3-inch howitzer to support the infantry.
Initially, Churchill tanks were plagued with mechanical issues. The biggest problem was that the engines used was underpowered and unreliable, and the placement of the engines were so poor that crews found it difficult to access the engines for servicing. Some of the issues were address by the Churchill Mk III variant, introduced in Mar 1942, saving it from being discontinued in favor of the new Cromwell tanks. Among the improvements was the addition of the 57-millimeter 6-pounder gun, which was a vast improvement over the weak armaments as originally designed due to the role as infantry tanks. Most of the Churchill tanks built were of the Mk IV variant; the biggest change of this variant compared to the earlier tanks was the return to the cheaper-to-produce cast turrets.
In 1944, the Mk VII variant entered combat on continental Europe; their 75-millimeter tank guns and even thicker (albeit still flat) armor made them powerful tanks, although since their engines were never upgraded since the start, mechanical troubles with the engines were still frequent. As infantry tanks, they were designed to be tough, as they were responsible to cross trenches and push away infantry obstacles such as barbed wires; as such, they were ideal candidates for jungle warfare in the South Pacific (though only a few were employed there by Australians) and as specialist vehicles (recovery vehicle, bridge-laying vehicle, "Hobart's Funnies", etc.).
Russia received 301 Churchill Mk III and Mk IV tanks as part of the Lend-Lease Program. After the war, Churchill tanks remained in service as combat vehicles in the United Kingdom until 1952. One bridge-laying vehicle remained in service into the 1970s. (font: http://ww2db.com/vehicle_spec.php?q=165 )

Building the kits:
As usual, I start the building by the booklet: The boring suspension and his thousands parts....ufff...And don't forget: I'll build two, in parallel...

Yesterday, I managed to make some more progress on the two girls mk IV. Replaces the mg barrels  by metal ones from RB Models:
I started the construction of turrets and continued assembling the hulls. 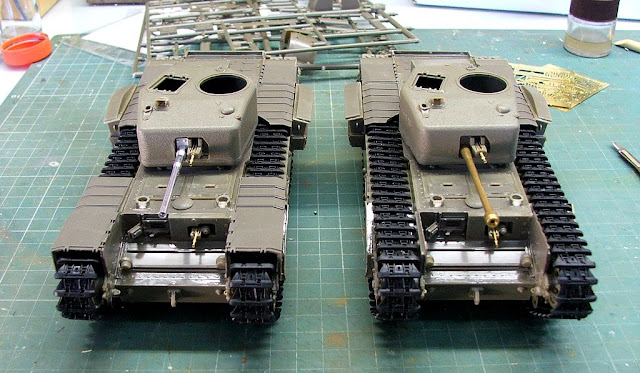 The progress of work on Saturday and Sunday: The two girls, ready for Primmer:

Primmer in the tanks:
After the primer, the layers of green, ups and downs...and decals... 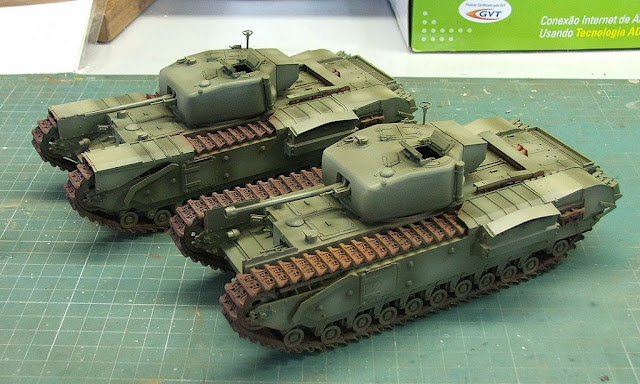 Starting the weathering, with pigments and a home-made mud. I made my mud like a Molotov cocktail. This is my recipe:

I mix everything ... and apply in the tank with an old paintbrush:
Next step, characterization of mud and dirt with different colors, grass debris and dust. Stay tunned !!!
Well, I finished the Churchills Mk IV with 6pdr guns. The project runs swift and easy...The AFV kits are awesome...

But,  here's the girls finished: First, the long barreled one. I built this tank with minus fenders, based in this picture: 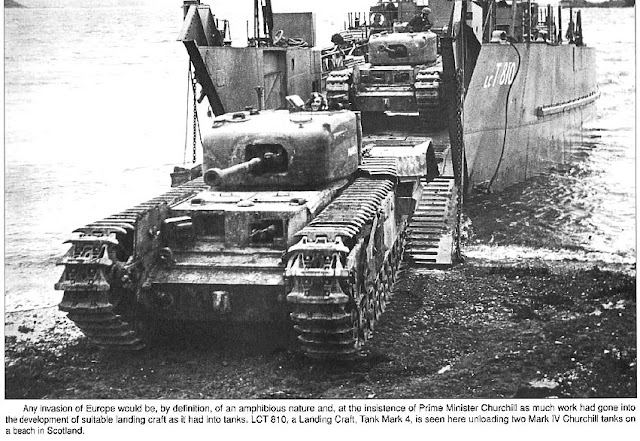 And the kit: "Betty" 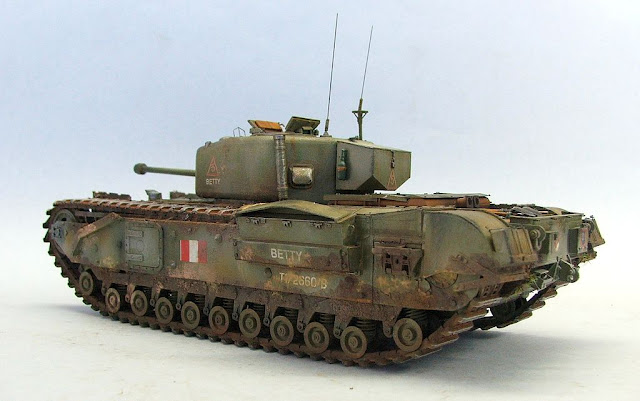 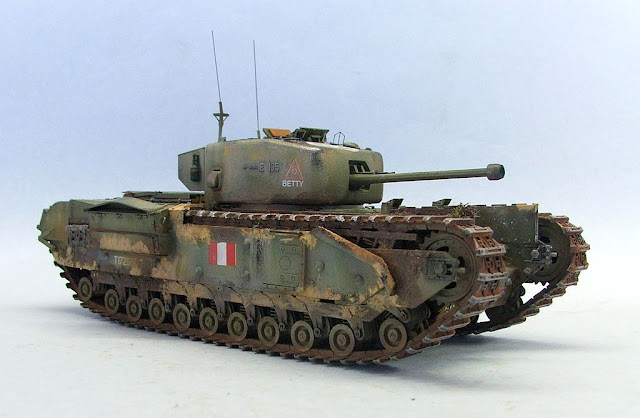 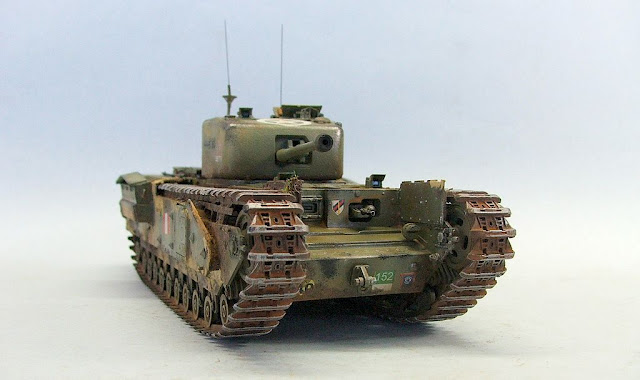 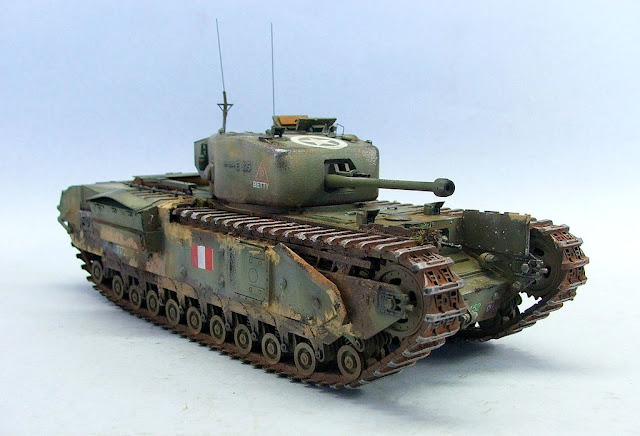 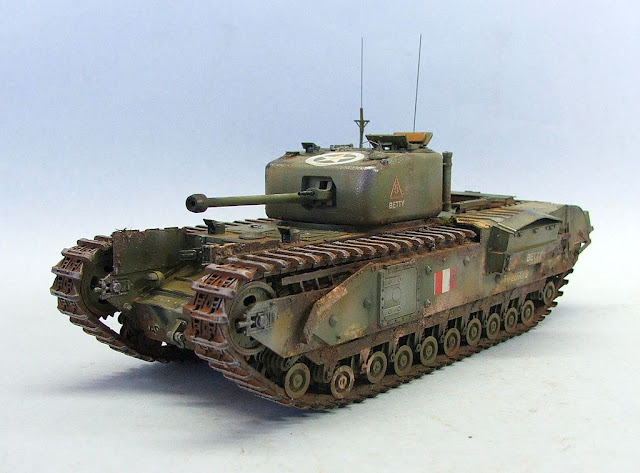 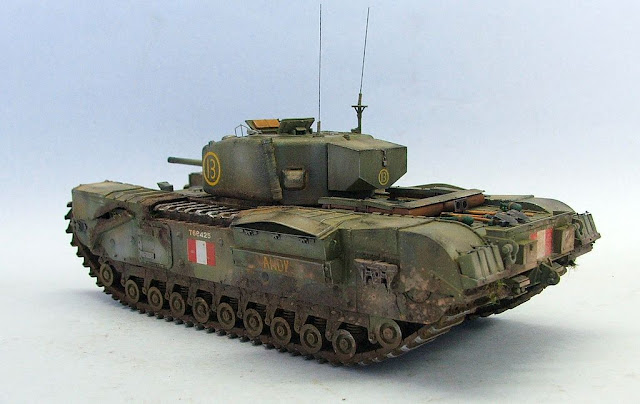 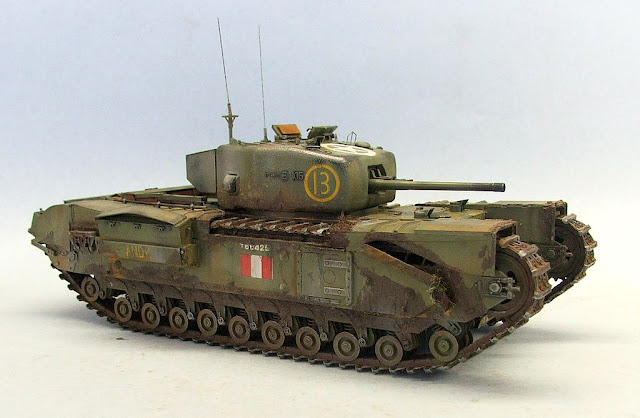 And the two girls, togheter...
Uff...More two Churchills for my collection...