Today's article focuses on this small self-propelled howitzer, which was widely used from the middle of WWII, until the end, by the Germans. Meet the Wespe 10.5 cm leFH 18/2 auf GII - Sd.Kfz. 124: 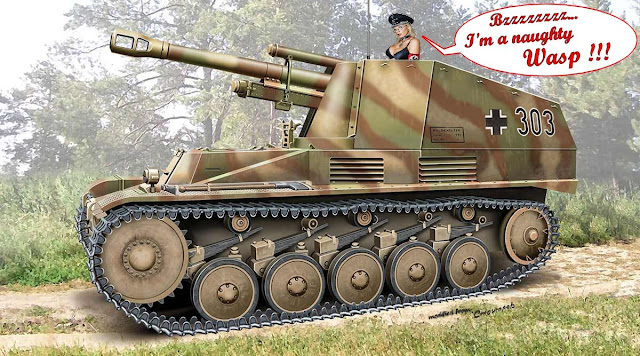 During the Battle of France in 1940 it became apparent that the intermediate tank of the German forces, the Panzer II, was unsuitable as a main battle tank. Though mechanically sound, it was both under-gunned and under-armoured. The chassis, however, proved serviceable for providing mobility to the 10.5cm field howitzer. Existing chassis were converted to self-propelled artillery vehicles, such as the Marder II conversion providing mobility to the PaK 40/7.5 cm anti-tank gun.

The design for the Wespe was produced by Alkett, based on the Panzer II Ausf. F chassis. Alkett had earlier worked with Alfred Becker to convert captured French armoured vehicles into self-propelled artillery carriers. Among other modifications the Panzer II's engine was moved forward and the chassis slightly lengthened to accommodate the rear-mounted 10.5 cm leFH 18 howitzer. 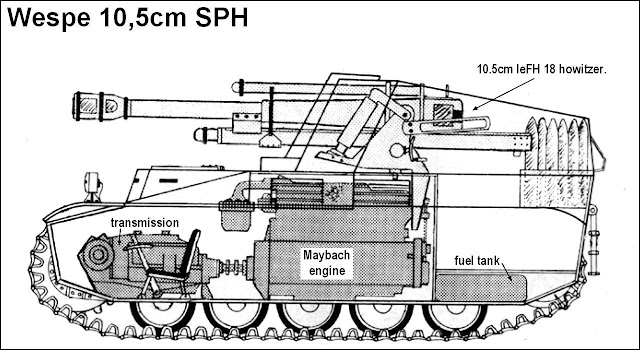 The superstructure was lightly armored, with 10 mm armor plate (enough to stop small arms fire) left open at the top and rear. The vehicles were produced by FAMO's Ursus plant in Warsaw. 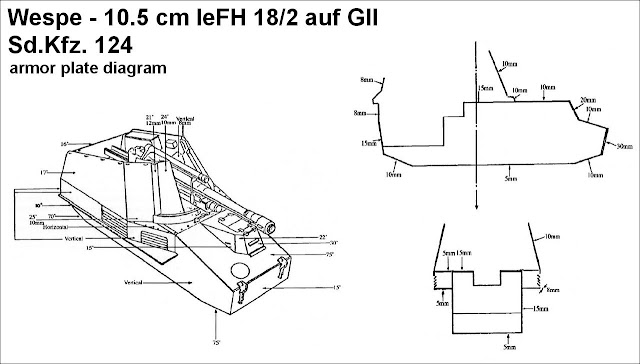 The Wespe was in production from February 1943 until June 1944, when Soviet forces approached the frontier.

By that time, 676 had been produced. An additional 159 gun-less Wespe were produced to serve as mobile artillery ammunition carriers.


Combat history:
The Wespe first saw combat in 1943 on the Eastern Front. It proved very successful, and Hitler ordered all Panzer II chassis production be dedicated to the Wespe alone, at the expense of other projects, including the Marder II self-propelled anti-tank gun.

The vehicles were allocated to the armored artillery battalions (Panzerartillerie Abteilungen) of Panzer divisions along with heavier Hummel self-propelled artillery. The Wespe brought greater mobility to the artillery formations of the panzer divisions.

The Wespe proved relative reliability and poor performance, but sorely needed. Like contemporary self propelled guns such as the British Sexton 25pdr. SPG and U.S. M7 Priest 105mm SPG, had inadequate overhead gun crew protection. The Wespe was a considerably smaller target than either of these allied vehicles, but it also held less ammunition given it was based on a smaller chassis chosen based upon availability given limited production capacity for larger ones.

The main deficiences observed in the Wespe were:


However, it has been established that this model of the self propelled gun is not suitable for employment in the mountainous terrain in the south and middle of Italy. The troops want their old towed batteries back. 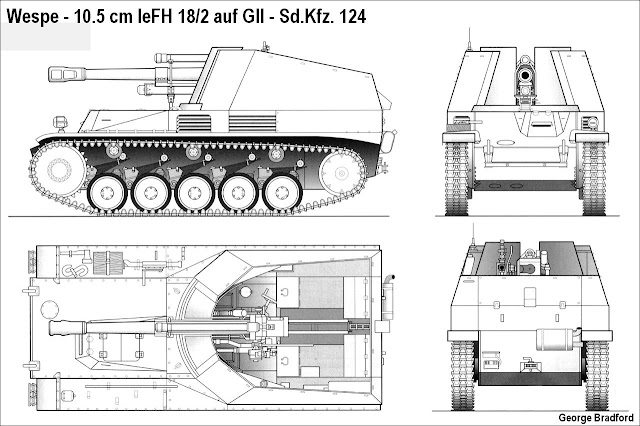 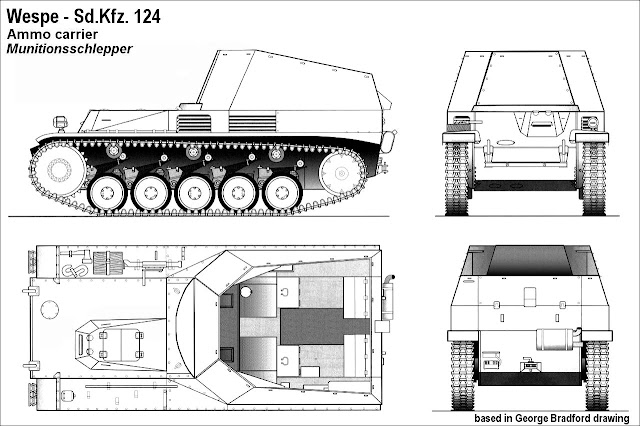 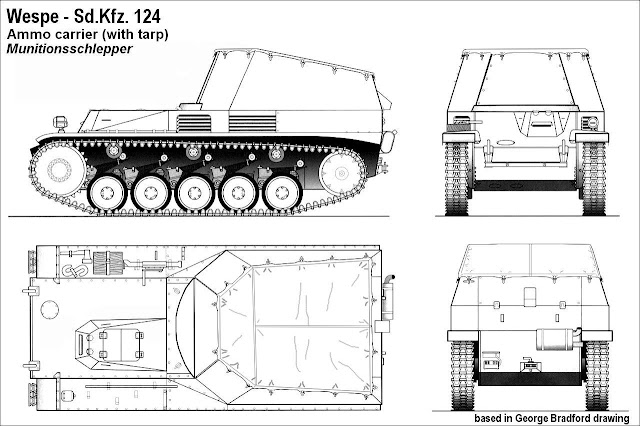 Another commission project, using the very good kit from Tamiya German self-propelled howitzer Wespe Sd.Kfz 124 (#35200) for the armed version.
For the ammo carrier version, I'll use a kit that I bought as scrap, from a colleague... An incredible Alan Sd.Kfz. 124 Wespe (#005), with missing pieces and a very rough construction.

Starting by the scrap-kit (Wespe ammo carrier) ... See how it got my hands: a very rustic construction, with a thick layer of paint and with the exhaust muffler missing ...

The former owner started converting the Alan kit in to Wespe ammo carrier, but he must have based himself on the art of a 1/72 ACE kit, because it is the only justification for the frontal shield to be curved. All the photos I've found so far of Wespe ammo carrier feature the flat front shield.


It seems that ACE relied on this photo to make the art of its kit box. But the frontal shield is clearly flat, and not curved (red arrow) ... I think the vertical line (see the point in the double blue arrow) led them to the error of deducing that the frontal plate was the result of the union between the two curved shields of the howitzer ...

Another Wespe ammo carrier, with flat armor front plate:
But back to Alan's crude kit: I decided to blast the kit, with a bath of brake oil (2 hours). With an old toothbrush, I brushed the surface of the kit, with the paint coming out in pieces ... After a good wash in running water, I put the kit in another bath this time with lye for another hour. the rest of the paint was blown off and I washed the kit with plenty of running water ... I was almost forgetting to mention that I neutralized the extreme alkalinity of the soda with an acid bath (90% water and 10% vinegar) for 10 minutes. After a lot of running water, what was left was this: All the paint removed, showing Alan's kit in all its glory !! (Oh my God!)


Well..let's turn the Alan-crap kit in something not so horrible ... I removed the curved front armor from the tractor and replaced it with something more realistic: the flat armor...And starting the Tamiya SPG.

I researched on the internet, in books, under the rocks, I consulted mediums, astrologers, gurus and the Gods and nothing to find a photo of the interior of the Wespe ammo carrier...
But as the old wise scholar said: "It is better not to do it than to do it wrong ...", I decided to make a canvas cover to hide the inside horrors of this kit. But never forget that I wanted to reproduce what appears in the photos: the Wespe ammo carrier with the canvas cover in place !!

Continuing the building, we must now waterproof and "reinforce" the tracing paper layer, to avoid accidents and stains in the painting (the paper is hydrophilic). I make a mixture of water (30%) and PVA glue (70%) and apply it with a wide, soft brush ...

And as always, I try to locate the armored vehicles in the historical period, researching the units and theaters of operations that the girls used ... and making profiles as a guide for paintings and markings ... The girls fought in Italy, under the markings of the 24th Panzer Division (Wermacht), the so-called Leaping Horseman Division. 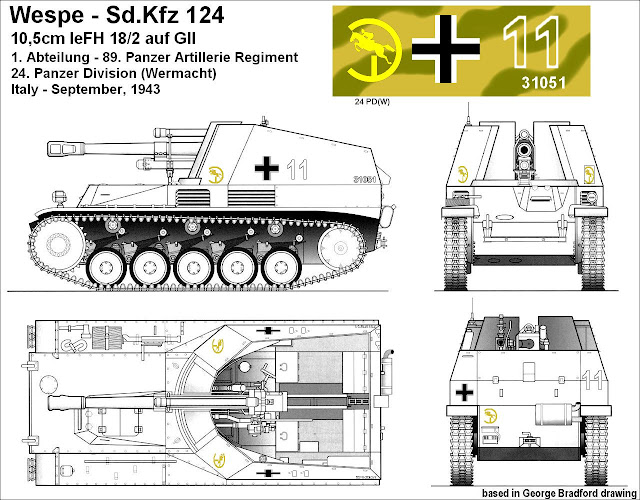 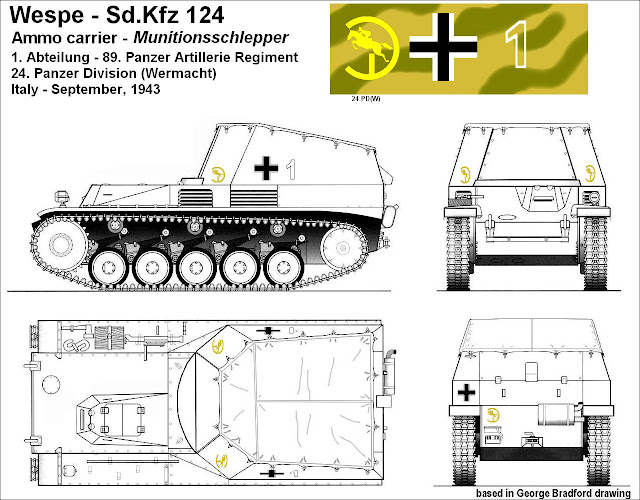 Starting the cammo: German green strips with jagged edges: painting on the battlefield ...


When I went to apply the decals... Disaster!!!

The numeral 1 tore and crumbled (very old decal ...). I decided to change the number of my ammo carrier to 4. And I found a chassis number decal, which I applied to the side of the armor. With that, I redesigned the profile of markings. My transport girl is now White-4.

Now, let's choose some things to put on the girls. As described above in the History, Wespe was very tight and did not have the capacity to carry much equipment internally ... Therefore, placing roll-bags, tarps and crew stuff externally was common. So, let's choose some Value Gear Details miscellaneous to give it that a "circus truck look" !!! 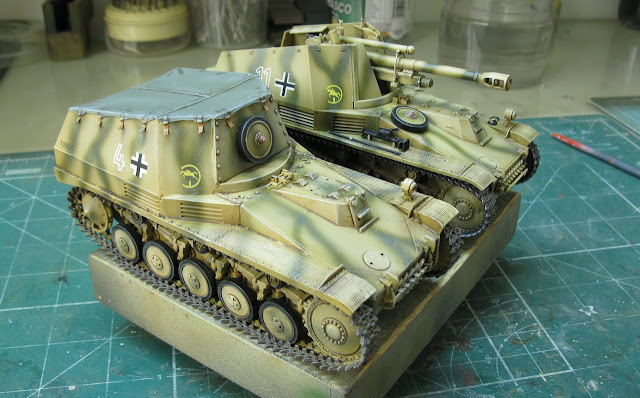 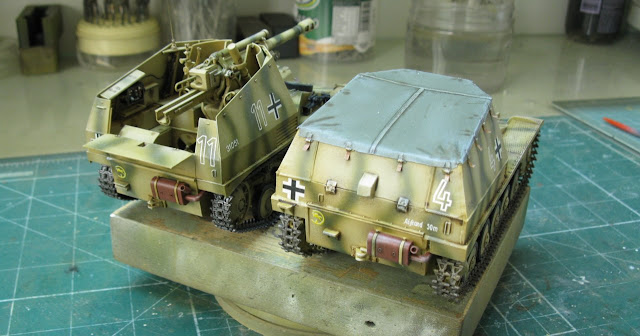 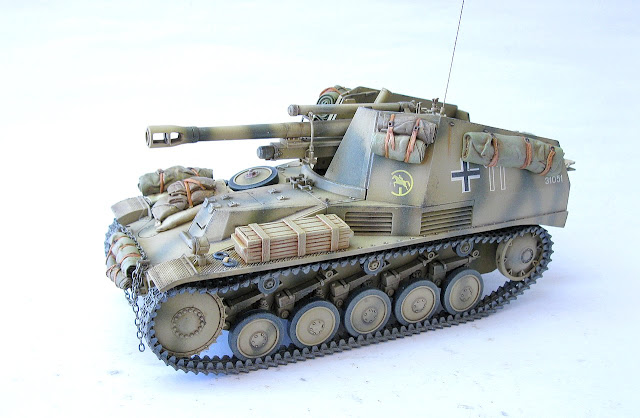 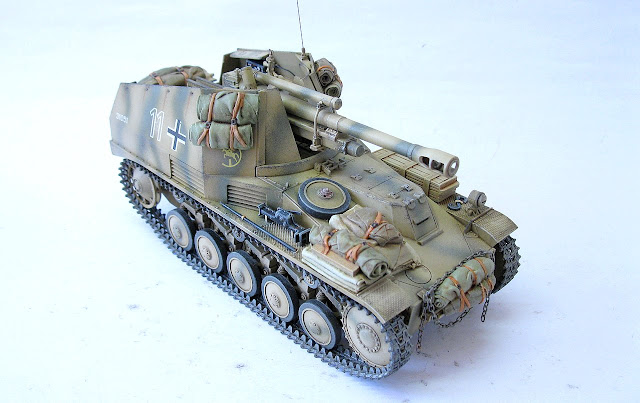 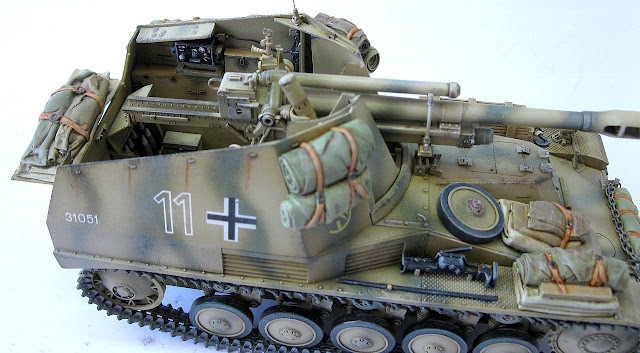 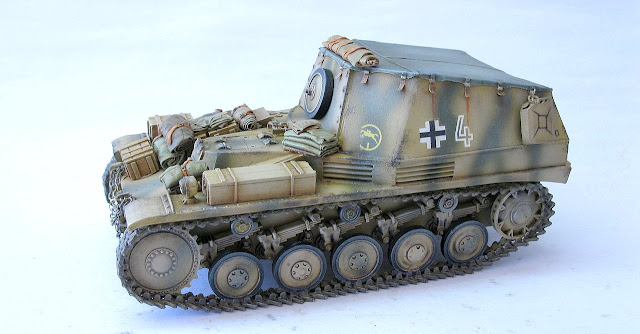 Indeed, the life of the German gunners was not easy. Notice the difference in the size of the combat posts between three contemporary weapons, of similar caliber ... 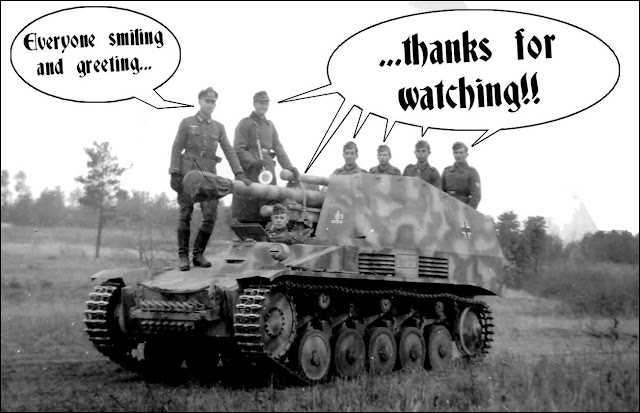