Another tanker for refueling fuel used by the Germans in WWII. Let's talk about a derivation of the famous and ubiquitous 3 ton 4x2 Opel Blitz truck.
Now is time to meet the Opel Flugbetriebsstoff Kessel-Kraftwagen (Tankwagen) Kfz.385.
History:
Without a doubt, the Opel Blitz 3t. 4x2 truck was one of the most common and numerous trucks employed in the German army, being one of the most well-known transport vehicles of World War II.
During its period of construction from 1937 to 1944 no fewer than 82.000 units were built. In the course of its many years of active service, apart from the basic cargo version, dozens of different specialized variants were developed utilizing the basic truck chassis.
However besides the classic truck, one of the most prominent and familiar types was the aviation fuel servicing truck, the Flugbetriebsstoff Kessel-Kraftwagen (Tankwagen) Kfz.385, which was widely used in all theaters from North Africa to the Eastern Front.

The first vehicles of this type were produced in early 1941 as by that time the needs of Germany's future participation in war was already clear. The early series refuelers had an open driver's cabin with a tarpaulin covering, just as did the earliest trucks of this type (Mercedes-Benz LG 3000 Kfz.384... see below)

Later it was decided not to make changes to the machine design, although it was obvious that North Africa would not be the only place these machines would find themselves in. The Tankwagens which were operated in the severe conditions of the Russian winter always moved with covered cabins, though it was considered that an open cabin would facilitate the driver's maneuvering on airfields near planes before refueling.
In comparison with the standard trucks the quantity of the Tankwagen Kfz.385 built was quite small (different sources indicate between 300 and 500 refuelers were produced), however in contemporary photos it is possible to see the Kfz.385 near all the main types of fighters and bombers of the Luftwaffe, as well as near large transport planes.


Their military service lasted until the end of the war, and even the epochal transition from propeller to jet aircraft saw the continued use of the Tankwagen Kfz.385 - the first jets such as the Me 262 were also refueled by these vehicles.

Mechanically, the Kfz.385 was very similar to the Opel Blitz transport, with the particularity to present the open cabin and assembled on the rear of its chassis a tank with a capacity of 3,150 liters of fuel, with its pumps, valves and hoses capriciously "packaged" in a very beautiful "Streamliner design" structure, of civil origin, manufactured by Eylert, which also manufactured the fuel trailer  (Flugbetriebsstoff-Kesselwagen-Anhänger (Anh. B 2/1) - aircraft-fuel-tank-wagon-trailer (Anh. B 2/1) with 3.150 liters of capacity,  that could be towed by the tanker truck.

Another interesting constructive detail was the exhaust gases from the engine just below the left stirrup, away from the main fuel tank. 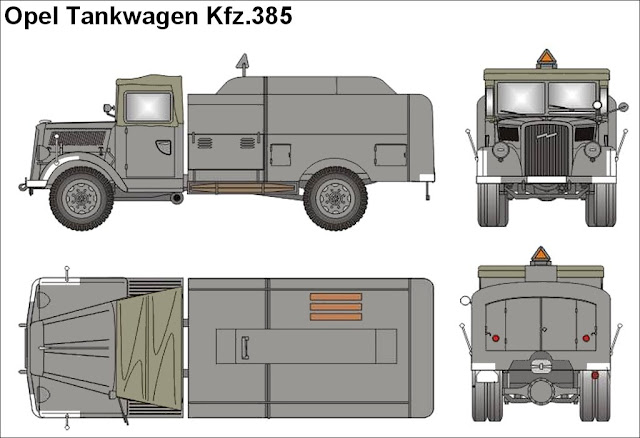 When I started this Opel Tankwagen project (2005), this Italeri kit did not yet exist in the market.
One of the solutions was to use the strange TVA kit (# 2), a multimedia kit, with the injected chassis from Opel Blitz (Italeri), the soft cabin made in resin and the tank made in vacuform. A true Frankenstein !!

I bought this kit from a modeler who was startled by the contents of the box: plastic, resin and vacuform. He tried to start the kit, but gave up.
The kit arrived in my hands with loose parts and without decals (see piocs below). But as I'm not afraid of frowning, let's face the little monster. Even more that I had just built my Ford V3000 Tankwagen and wanted to know what the "original" vehicle of the lineage would be like. So, get to work !!!


This was the fuel tank in vacuform. Notice that the colleague had cut a part to try to build, but wisely, gave up ... But that is nothing compared to the vacuform I faced to build my Opel Blitz Bus Ambulance!!!
But I found that the details of the resin tank of the defunct Panzer Resin Models (PRM) were much better than the vacuform part. So I turned the TVA tank into plastic scrap and decided to use the PRM solid resin "brick" tank ....

The wheels are the old parts from Italeri, with tires in vinyl, melting... Luckily, I had an old resin wheel set, but without the spare wheel.
I used then a wheel from Italeri from my spare parts box and the resin tire from a manufacturer here in Brazil, Electric Products, from my friend Bertolin. Very good thing, that fit perfectly !! As I said before, this kit arrived in my hands without decals (it was second hand, remember ??). So I went hunting for markings and paintings. And I stumbled upon this beauty here, on the internet:

Jagdgeschwader 27 (JG 27) "Afrika" was a fighter wing of the Luftwaffe during World War II. The wing was given the name "Africa" for serving in the North African Campaign predominantly alone in the period from April 1941 to September 1942. Elements of JG 27 fought in every major theatre of operations in which the Wehrmacht operated.

Well ... I decided not to make EXACTLY the vehicle from the profile above, but a vehicle serving the same wing. Let's do the decals..  Thanks to Corel Draw and my old HP lasercolor 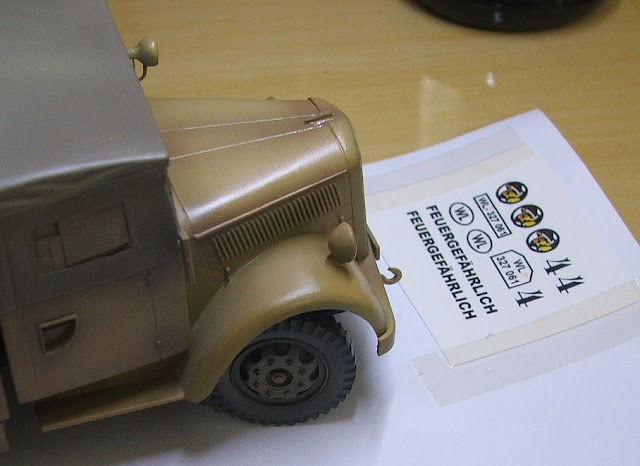 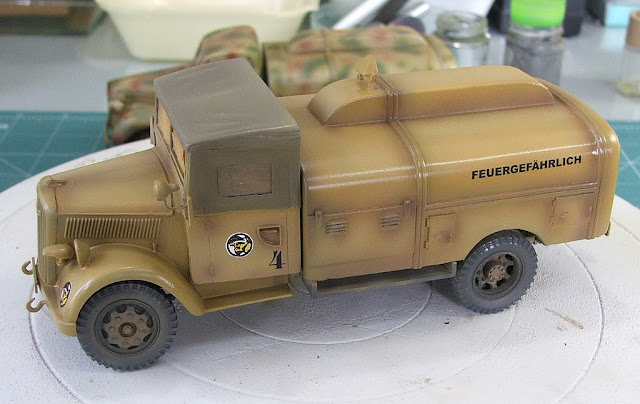 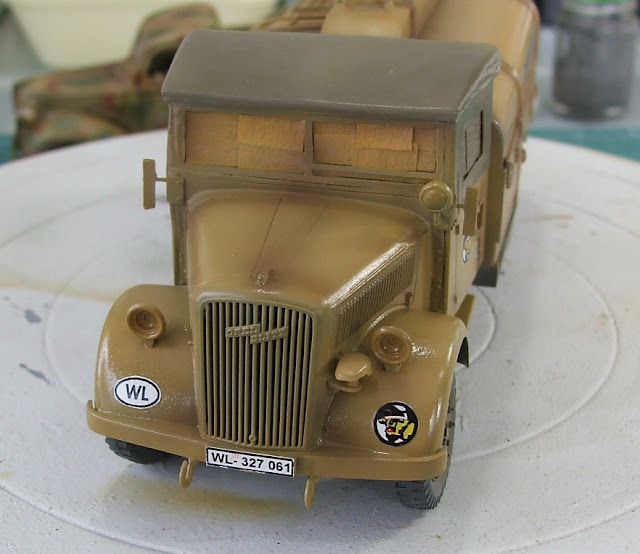 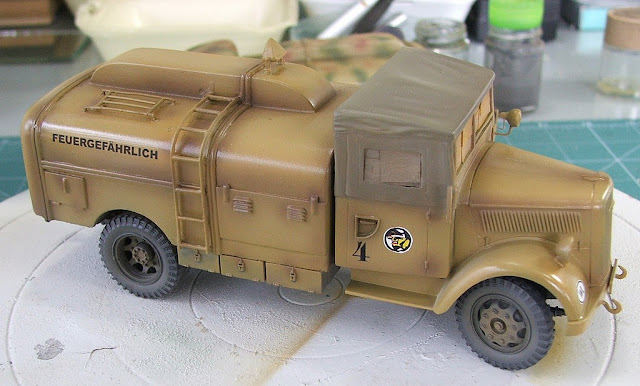 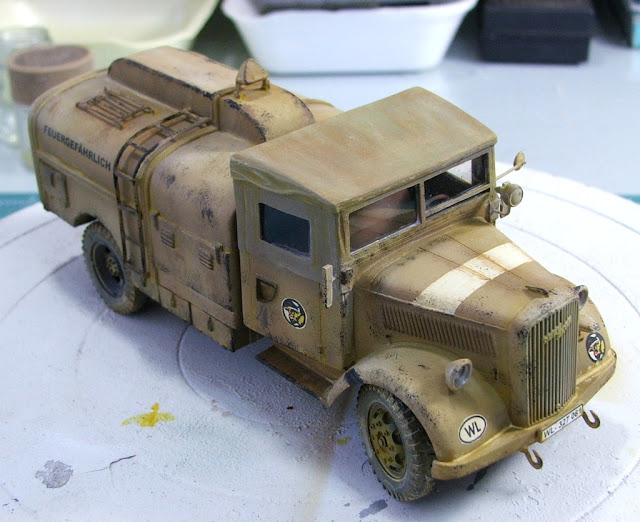 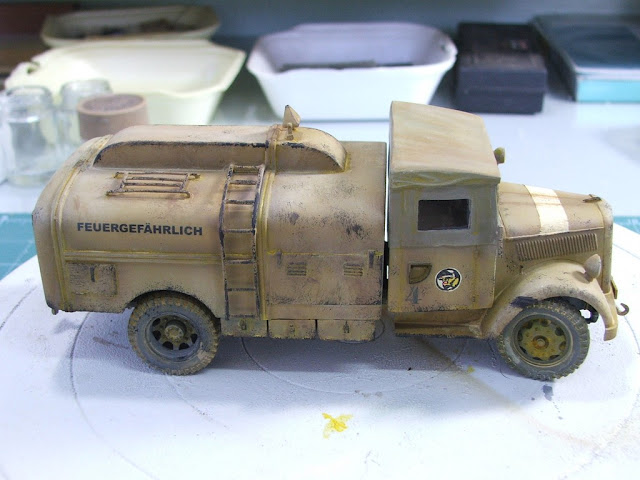 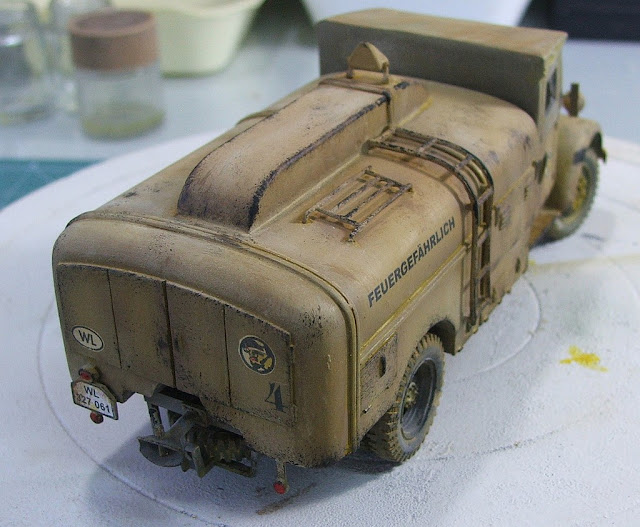 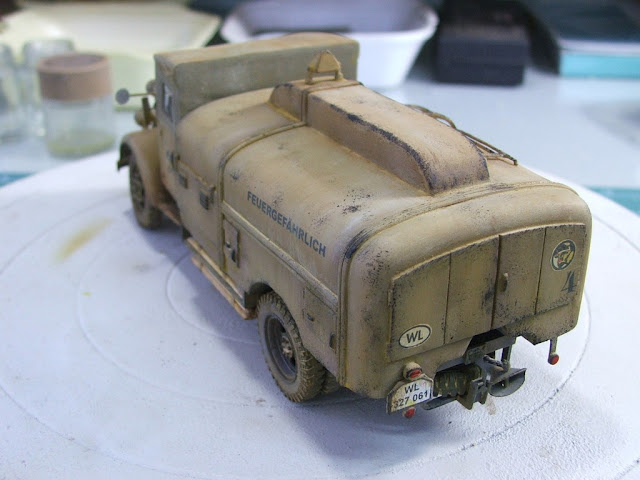 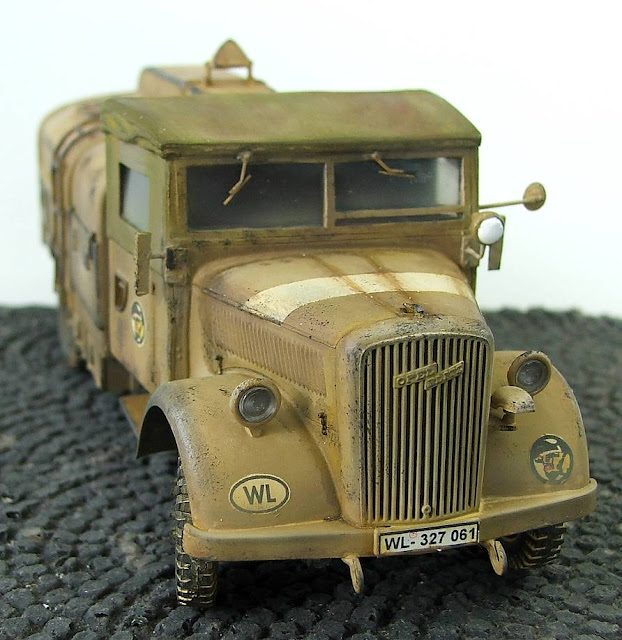 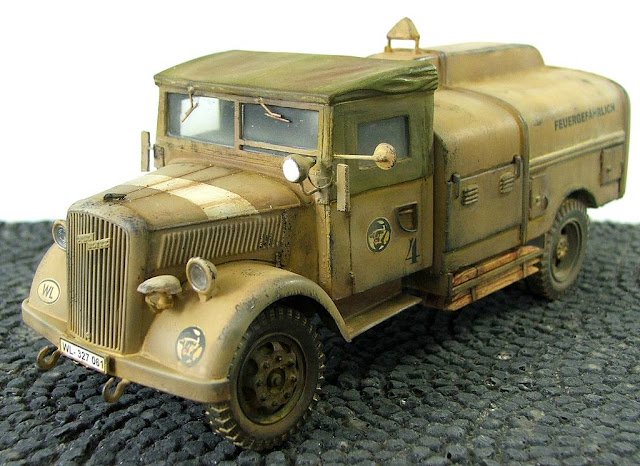 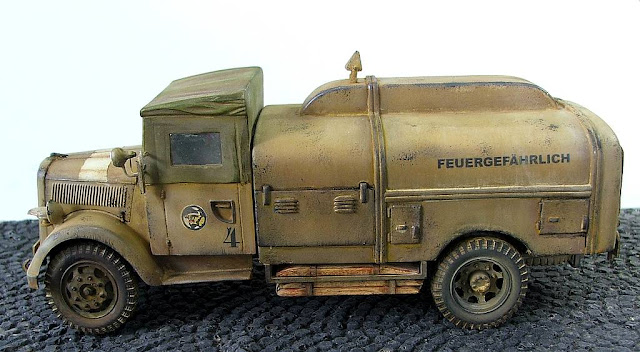 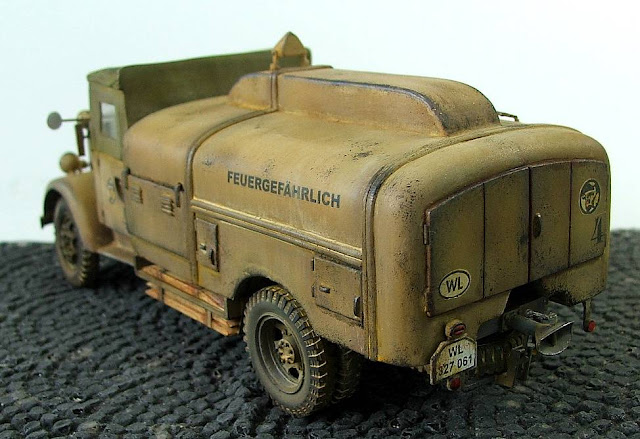 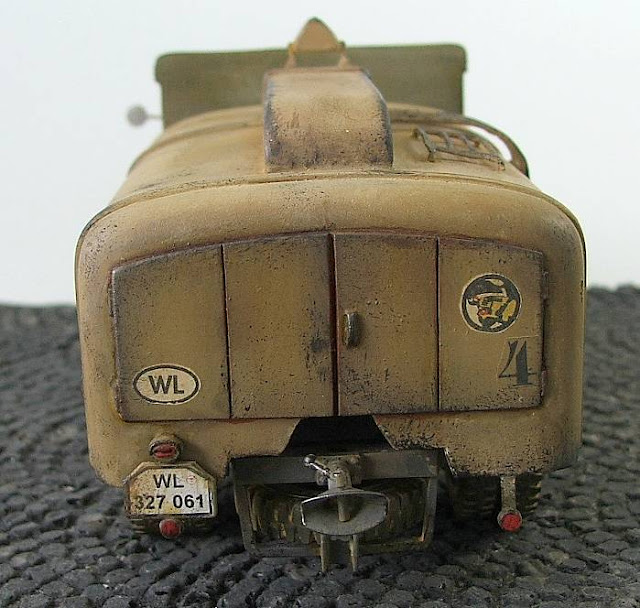 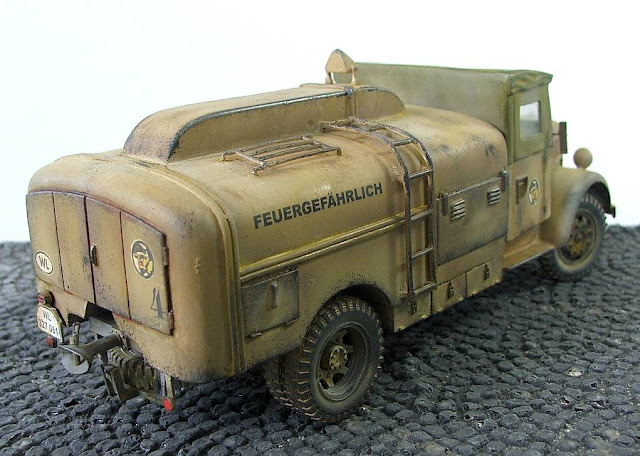 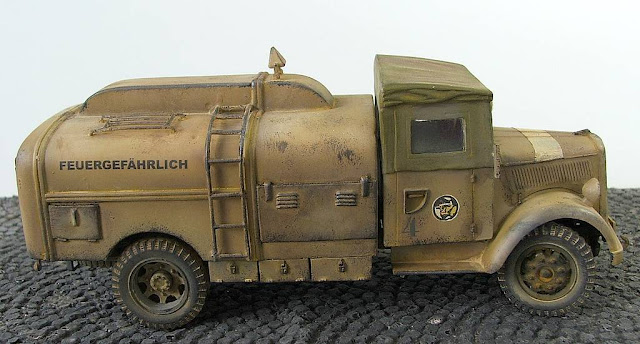 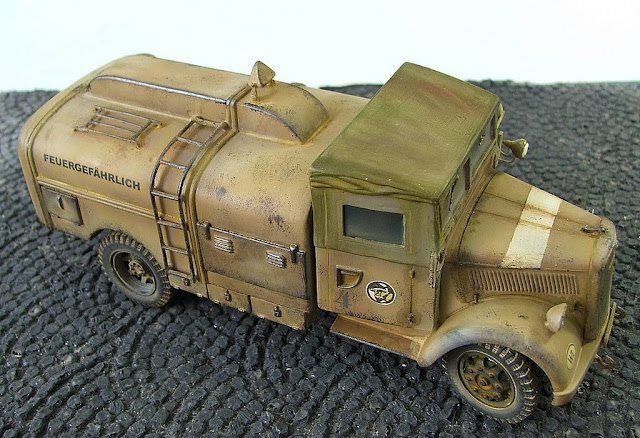 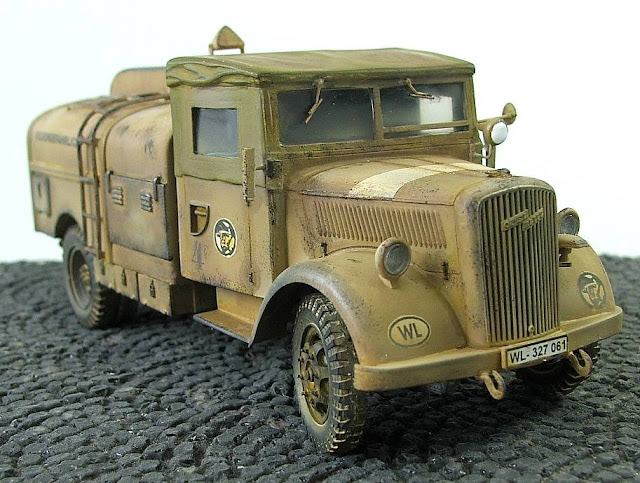 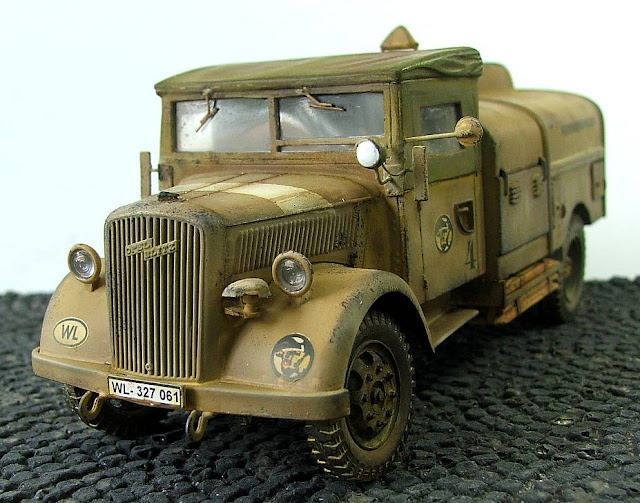