Another weekend... Another project...

The Entwicklung series, more commonly known as the E-series, was a late-World War II attempt by Germany to produce a standardised series of tank designs. There were to be standard designs in six different weight classes, from which several specialised variants were to be developed. This was necessitated by the extremely complex tank designs that had resulted in poor production rates and mechanical unreliability.
The E-series designs were simpler, cheaper to produce and more efficient than their predecessors, however their design involved only modest improvements in armour and firepower over the designs they were intended to replace, such as the Hetzer, Panther G or Tiger II, and as such represent the eclipse of German armoured vehicle design by such tanks as the American M46 Patton, the British Centurion Mk 5/2 and Soviet T-54 tanks, which would have been the Entwicklung series' contemporaries and likely opponents.

The E-10 design was developed as a replacement of the Panzer 38(t) and the designs based on it. The 38(t) chassis was enlarged and redesigned. This new design was to be called PzKpfw 38 (d), d standing for deutsch ("German") as opposed to (t) fortschechisch ("Czech"). The designs based on this new chassis would all be in the 10 to 25 tonnes weight class.
The intention was to create several new light tank destroyers as a replacement for the Jagdpanzer 38(t), as well as a new family of Waffenträger armed with heavy anti-tank guns.(Wikipedia).
The enigine was to be a rear mounted Maybach HL 100 of 400 HP or an air cooled Argus of 350 HP. The combined hydronamic transmission and steering unit was to be made by Voith and was also at the rear of the tank, easing removal and servicing. This would also free up space in the fighting compartment. The engine deck and rear plates could all be removed to allow access and the engine and transmission could be removed as a single unit. It was expected that the top of speed of the tank would be 65-70km/h. Even though the E-10 designation would suggest a weight of 10 tonnes, the combat weight would probably have been about 16 tonnes.
The gun was to be the 7.5cm Pak 39 L/48, in a mount similar that of the Hetzer. It may have been replaced on the production lines by rigid mounted (Starr) version of the same weapon. The suspension was by bolt on external units which used Belleville washers as the spring medium. There were four units per side, each fitted with a single 1000mm diameter steel tyred wheel. The wheels were alternately offset on the axles to straddle a single guide tooth track. One feature of the tank was the ability to reduce its height. This was achived by rotating the pivot points of the suspension units via cranks driven by hydrolic actuators. The vehicle height could be reduced from 1760mm to 1400mm. The armour was to be 60mm thick on the upper glacis plate, 30mm on the lower glacis plate and the rest all 20mm.
The E-10 did not go into production and its projected role was to be undertaken by the similarly sized but mechanically simpler Jagdpanzer 38(d), based on a re-engined and lengthened version of the venerable Panzer 38(t) chassis.

Building kit:
The Trumpeter´s kit is boxed in a resistant cardboard box , with a very beautiful cover art.
Parts and color chart:
I began the build by the suspension, following the instructions:
Here, I close the hull, for best alignment...

I made a counterweight with metal rods stuck in the movement mechanism of the gun. Two rods plus a small piece of metal offset the weight of the pipe. I used cyanoacrylate to do this. Five minutes of work. 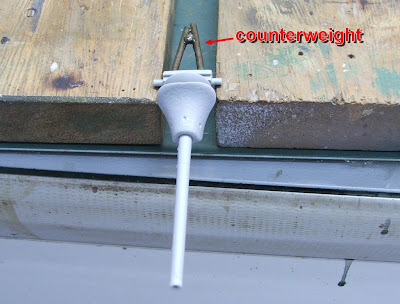 The kit is almost ready. I use vinyl tracks for two reasons: they are very good and I'm full of laziness ...
Also I have chosen to use the additional armor of styrene, instead of using the metal. I opted for this solution for handling the kit. Bonding the metal with plastic is really fragile.


The kit have two surplus wheels. I decided to use one as a spare wheel. I made a system for fixing the spare wheel on one of the armor plates with Plastruct.
A little metal detail, by RB Models;
Primmer coat:
Details primmed. Notice the spare wheel locker, made in scratch...
Really, this was a quick project... I painted the girl in yellow and did the cammo with green and brown strips... 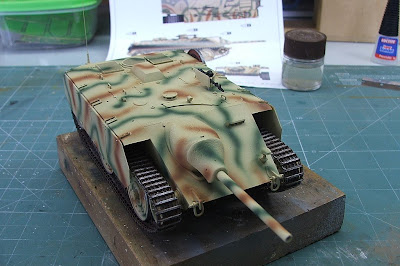 I applied a layer of Future, to prevent the silvering in the decals: 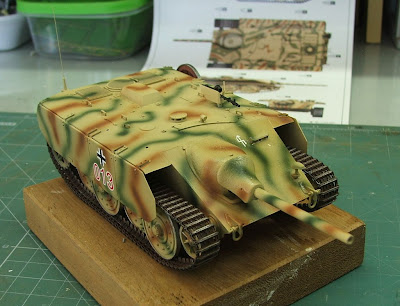 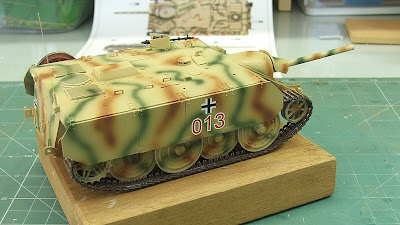 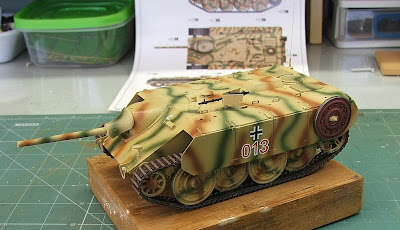 And the Destroyer is done and ready for action: 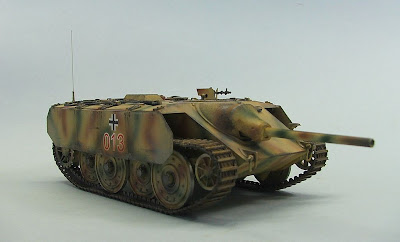 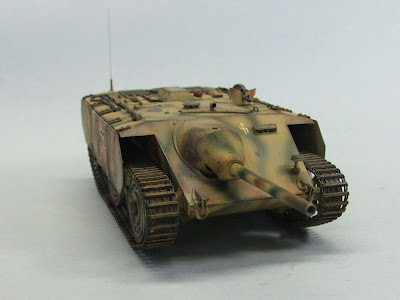 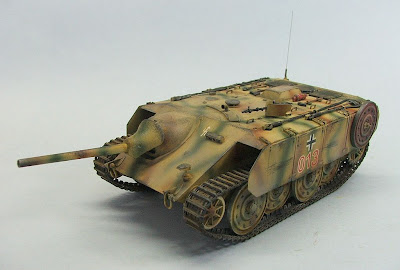 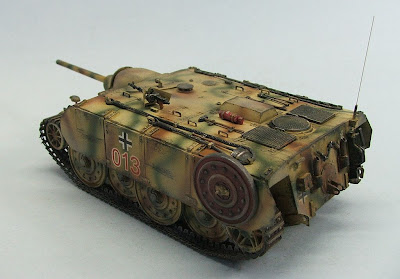 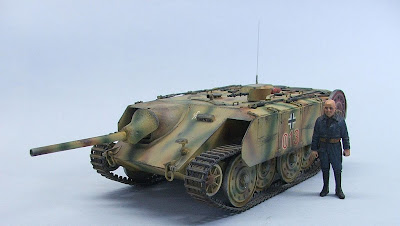 Gents!!!
I bought this kit at the end of last year and when the box arrived in my home, my belly-worms simply stirred up. I love trucks and this model caught my attention as something different from the old Italeri and Heller CCKW kits.
In short, I could not resist the call of the truck and I began to build, just as see my bench vacated and clean. With you, the CCKW 353 of 2 and 1/2 tons, with a 40mm Bofors anti-aircraft gun in the back. This arrangement fought in Europe at the end of WWII, in the hands of the Free French.
The real truck:

The kit:
Starting the building...One interesting thing: the pieces are stuck in trees according to the sequence number. It may seem silly, but very helpful in quickly mounting. Prevents us to be wasting time looking for a part in the tree at random way. I loved the HobbyBoss solution.
The chassi parts  are very well injected. No bendings!
Using the photo-etched parts:
Dry-run with the wheels (injected, no vinyl...and polycaps...) to perfect alignement...

A little advance...Cabin under construction:
And the truck is growing...The rear parts under construction:
Here, a little surgery: I replaces the plastic recoil spring by another made ​​of cooper wire. For this,I used a copper wire of 0.7 mm diameter, wound around a drill with 1.5 mm diameter. The spring was with a diameter of 3 mm:
I took advantage of Carnival´s holiday and finished the truck ...
One thing that is bothering me is the wooden frame at the rear of the truck. In the instructions, this frame is shown downed ... But there is no logic to it ... And the original photos do not help ...

I decided to remove the frame and mount it upright, cutting the tips that protrude from the horizontal beam horizontal...See pic below: the frame built erect and the first layer of paint. 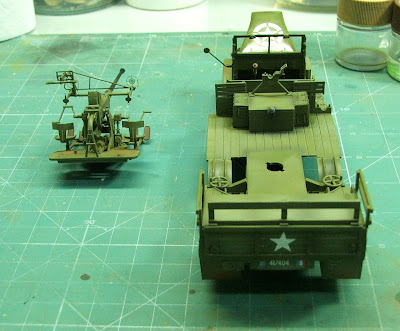 And the French truck is done: 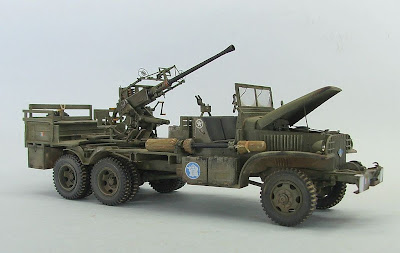 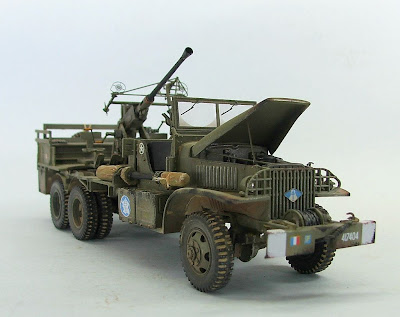 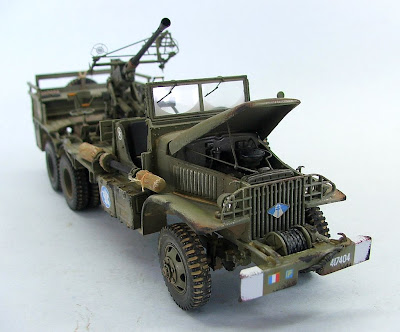 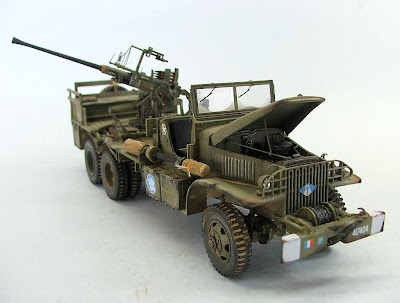 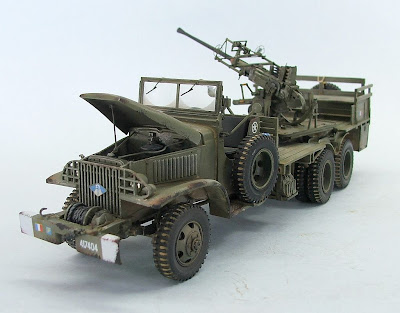 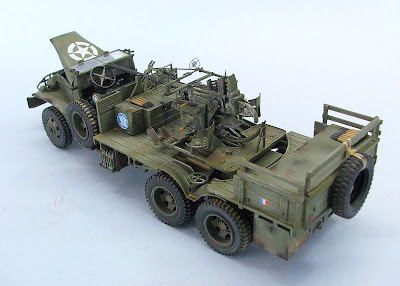 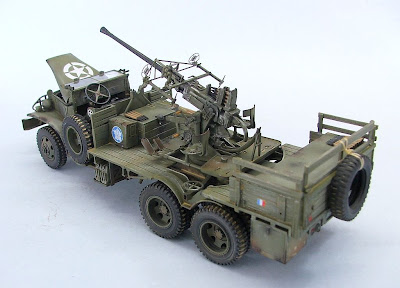 Well, Gents. I loved building this HobbyBoss...The details are good and the build is easy and soft...Some details are omited in the instructions, like the gas pedal,that exists in the sprue but no is quoted ... and a disk holding the spare tire, in PE.

I recommend without a doubt!!