Panzerkommandanten!
I built this tank in december, 2007 and I will show to you guys all the steps of assembly of this unique command vehicle, which fought with the famous Schwere Panzerjäger Abteilung 653, in Ukraine, 1944. 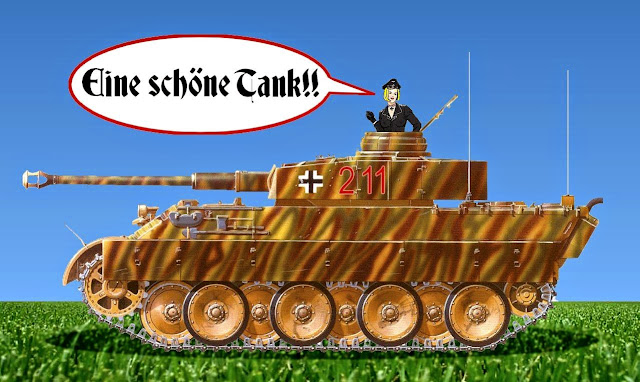 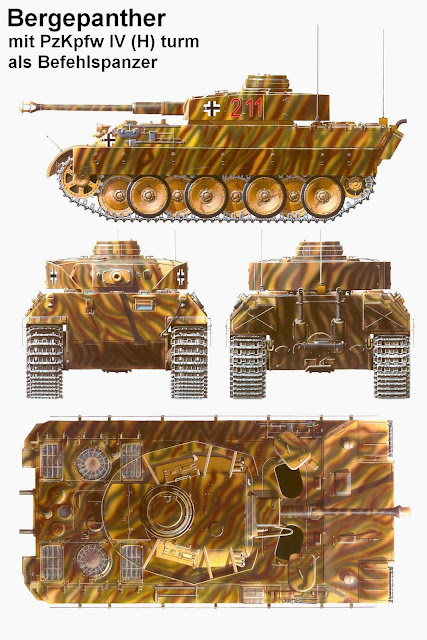 The vehicle was a combination of SdKfz 179 Bergepanther with early chassis (belonging to the first 12 units in this unit, built from June, 1943)...
... with an adapted turret (screwed permanently) from a cannibalized PzKpfw lV Ausf H in the Bergepanther hull.
The purpose of the transformation was "close" the open hull of Bergepanther with a armored turret, in order to better protect of his crew. With the hull closed by a turret, one of these rescue vehicles was converted into Command Car.
The gun was just a dummy and the absence of of the gun breech allowed a larger space on the tower for extraradio and map tables. The result was a command tank with a fixed turret, plus a name that was absolutely mind numbing: Bergepanther mit aufgesetztem Pzkpfw IV(H) turm als Befehlspanzer. The work was done as a field conversion, and only one vehicle is known to have been converted. It served with the Schwere Panzerjäger Abteilung 653 (equipped with Ferdinand and, later, Jagdtiger vehicles) on the Eastern Front in 1944.

April – August 1944
In December 1943, the Soviets began operations that would ultimately drive a wedge between Army Groups South and Centre. By late March 1944, Soviet forces had surrounded the important road junction of Tarnopol with the goal of securing the junction and the rail line from Odessa to Lemberg, which was vital to the German war effort. During this time, the Schwere Panzerjägerabteilung 653 was undergoing refit with the overhauled SdKfz 184 Ferdinands (soon to be renamed “Elefant”).

The 1st company was re-equipped and sent into service in Italy (along with the 1st Maintenance Platoon). This left the Stab (headquarters) company and the 2nd and 3rd companies to await completion of their overhaul and assignment.
This effort was completed in on 31 March 1944 and the three companies embarked for the eastern front on 2 April arriving in Brzezany (Ukayne) on 6 April. By 8 April, the Schwere Panzerjägerabteilung 653 was attached to the 9th SS-Panzerdivision in an effort to relieve Tarnopol. This effort ultimately failed, and the operation was called off. At the end of April the abteilung began a reasonably quiet time of rebuilding and retraining of replacements in Brzezany.
It was during the time in Brzezany that the Schwere Panzerjägerabteilung 653 received and converted various “special vehicles” that make the unit distinct (apart from the fact that it was one of the only two battalions to receive the Ferdinand/Elefant tank-hunter). Among the special vehicles was: 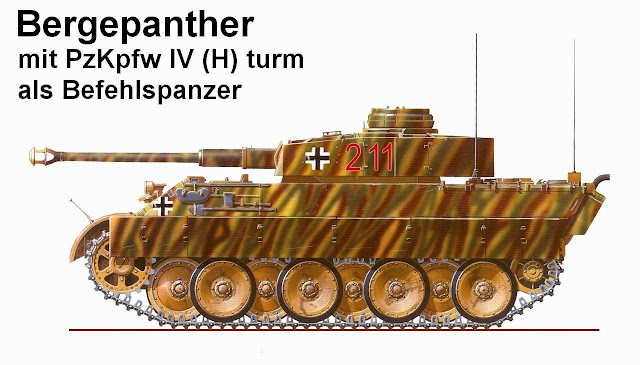 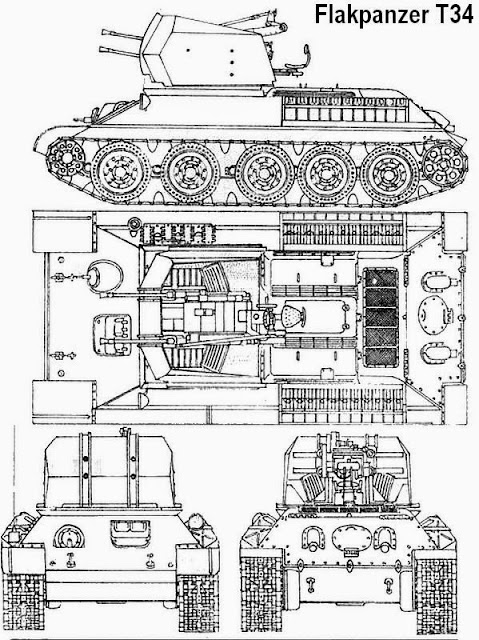 The battalion also received four further Elefant tank destroyers with a modified rear hatch  to better facilitate the installation and removal of the main armament.
On 13 July 1944, the 1st and 4th Ukrainian Fronts attacked Army Group North Ukraine quickly splitting the 1st and 4th German Panzer Armies.
The Schwere Panzerjägerabteilung 653 came under assault from several Soviet divisions at Pomeryany and Rohatyn on 14 August 1944. The battalion fought an incessant rearguard action through Lemberg, Kurowice, and Yeziezanka. Unfortunately during this fighting withdrawal, the battalion lost over 60% of its heavy vehicles. Most were not lost to direct enemy action, but rather to the inherent weaknesses of the Elefant design. Its technical complexity resulted in several break downs and other technical failures. The speed of the advance meant that any breakdown often resulted in the vehicle being left behind.
Many bridges could not support the weight of the immense tank destroyer, and the fuel situation also meant many simply ran out of gasoline and had to be destroyed by their crews.
The Elefants, September to the end:
The few remaining Elefant tank-hunters of  Schwere Panzerjägerabteilung 653 initially remained with the 17th Army. The Elefants were concentrated into the 2nd company, which was later renamed the 614. Schwere Panzerjägerkompanie. The company later joined the XXXXVIII Panzerkorps under 4th Army command on the eastern front.
The rest of the 653. Schwere Panzerjägerabteilung returned to Germany where they were refitted with the new Jagdtiger tank-hunters. The Elefants continued to serve on the eastern front. They fought against the Soviet Vistula-Oder Offensive in January 1945.
The Elefant saw its last battles in Berlin, with the last two remaining vehicles fighting until captured in May 1945.
Specs: 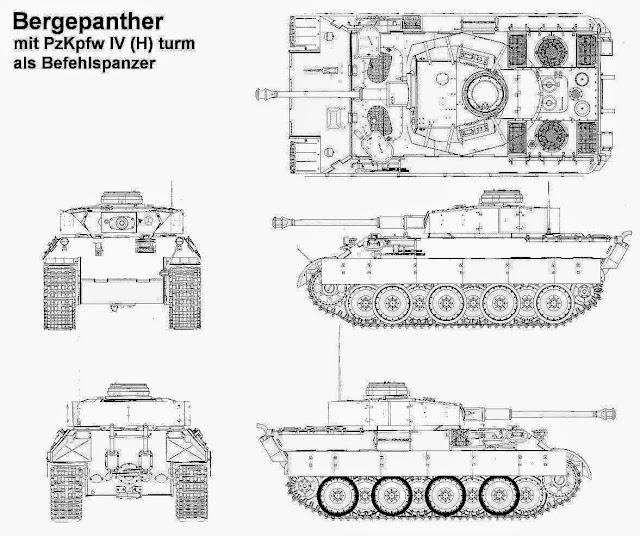 The kit:
To built this project I chose for the chassis the kit ICM Bergepanther (early version) #35341 and for the turret, an old Academy kit Panzer IV Ausf H with armour #1327 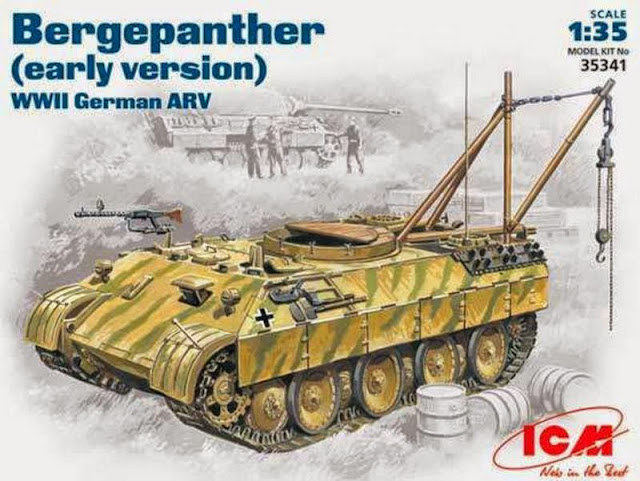 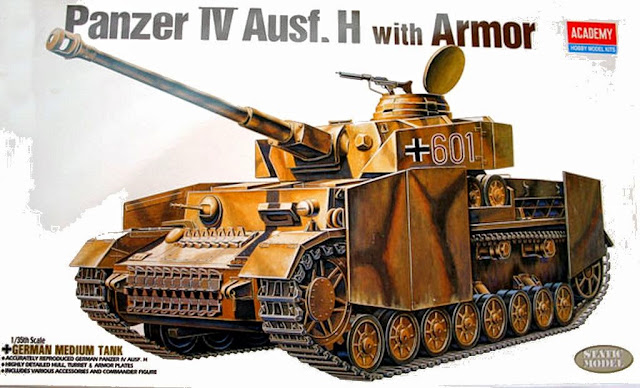 The building progressed quickly and smoothly... 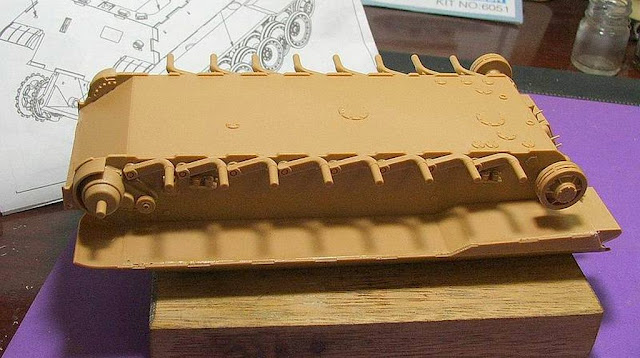 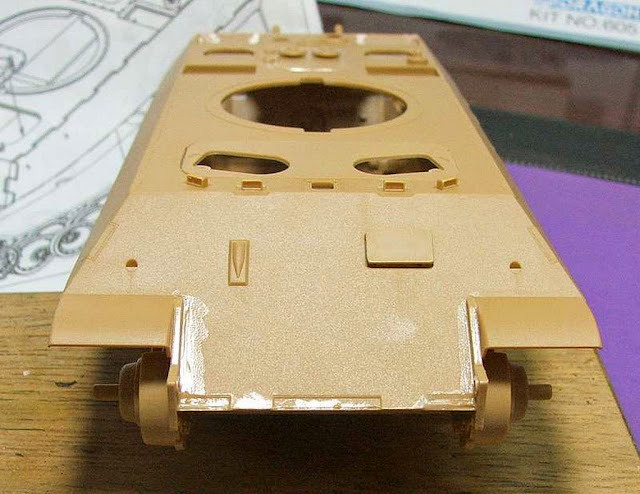 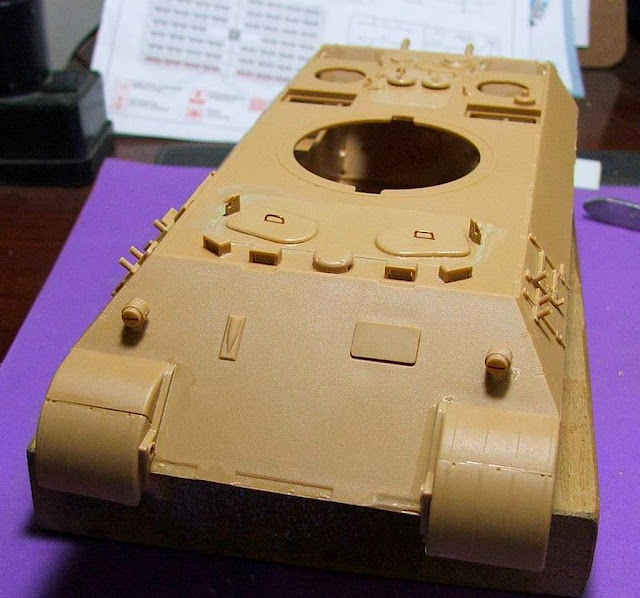 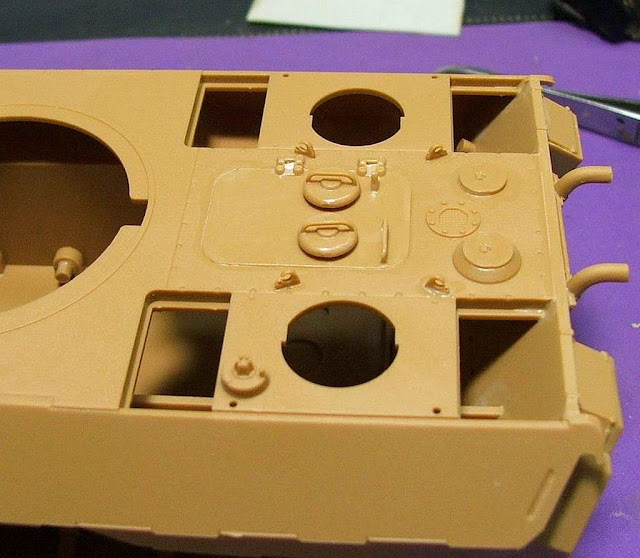 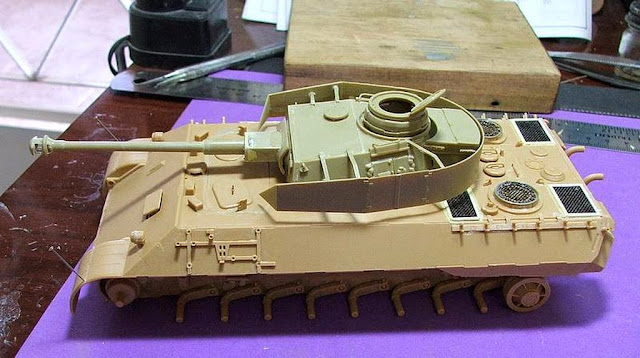 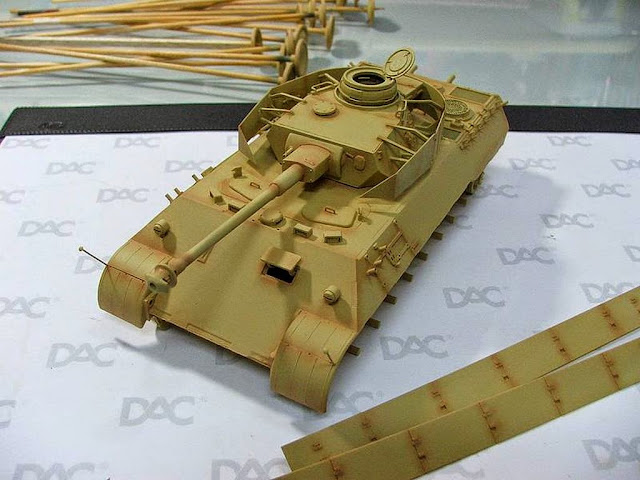 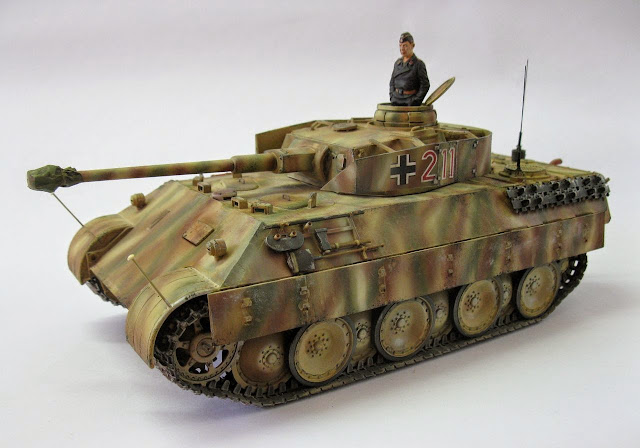 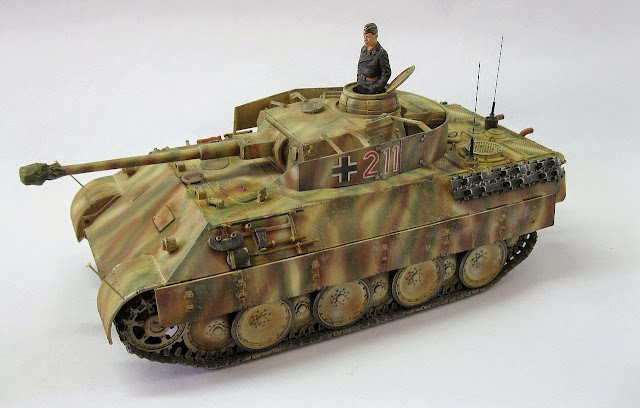 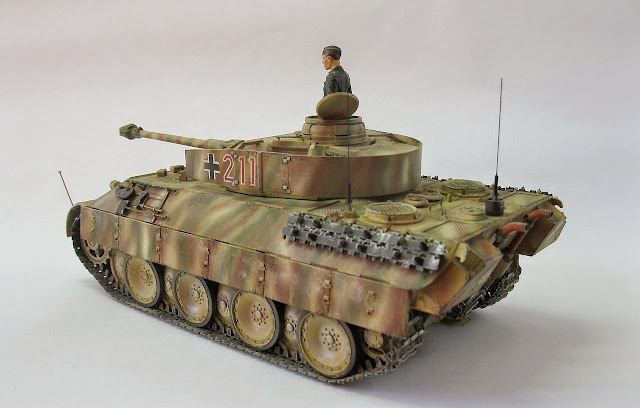 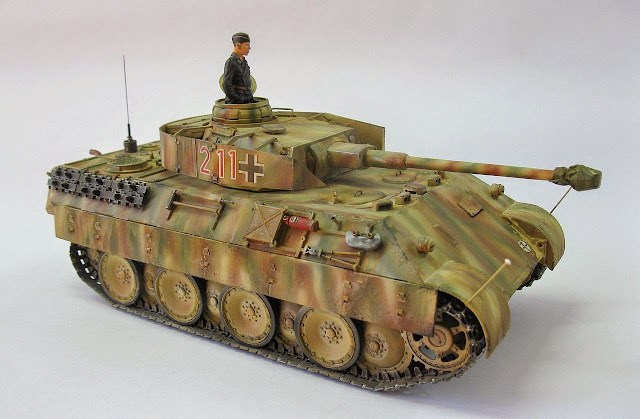 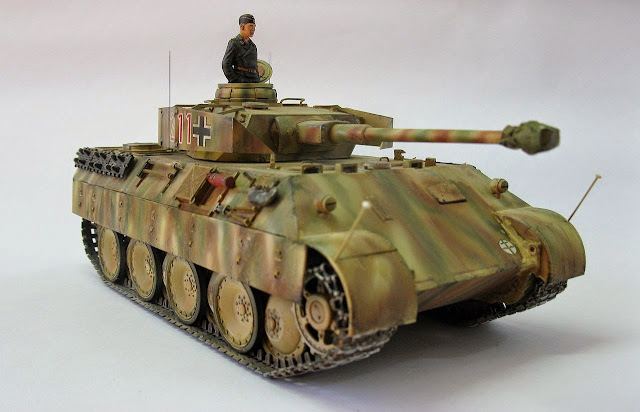 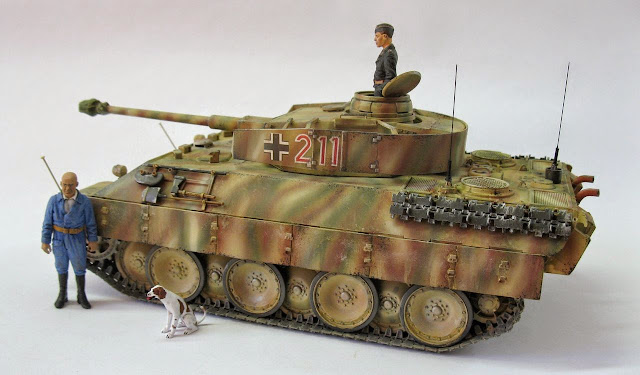