Gunners!!
The girl about whom we are going to speak was born of the need to promote self-propelled air protection over an armored or infantry group. This should be achieved in a simple, economical and using a reliable and disponible armored chassis.
This is the story of the versatile Crusader III AA Mk.II/ Mk.III - 20mm gun. 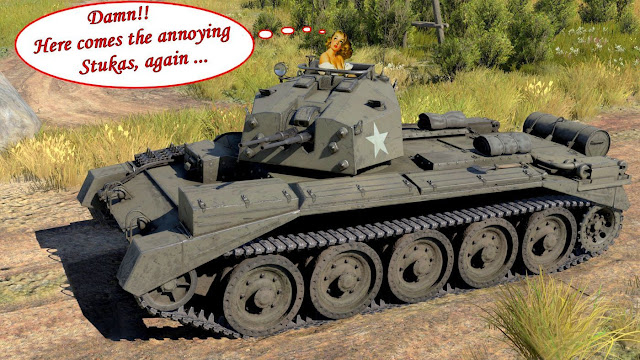 History:
In September 1941 it was decided to develop a self-propelled anti-aircraft gun (SPAAG) based on a tank chassis for Royal Artillery. The main gun chosen was the Bofors 40mm AA automatic gun. Light anti-aircraft tanks, mounting multiple machine guns, already existed but they were cramped and unpopular on account of their limited range.

After the end of the North African Campaign, the availability of better tanks such as the Sherman, Churchill and Cromwell relegated the reliable Crusader to secondary duties such as training tanks, anti-aircraft mounts or gun tractors. In these roles they served for the remainder of the WWII.

The Anti-Aircraft versions (AA) of the Crusader were developed in response to the perceived need to counter German “tank-busting” ground attack aircraft. They consisted of a Crusader Mk.III armed with Bofors 40mm AA gun: Crusader Mk.III AA Mk.I 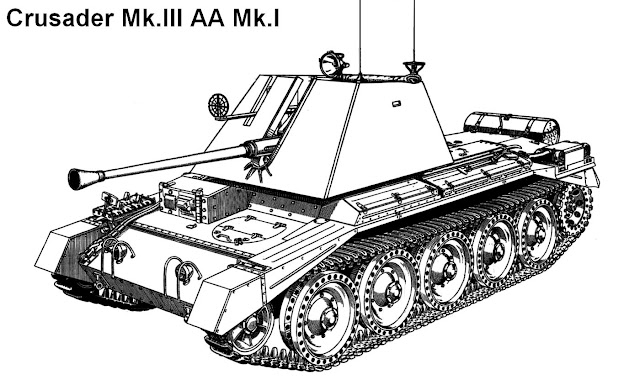 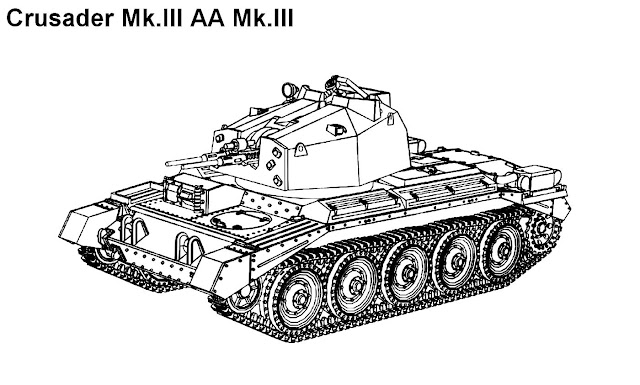 The Crusader III A.A. Mk II prototype appeared from Morris Motors in the summer of 1943, the pilot model being issued for testing in June.  The armor thickness in the turret was 30mm at the front and 14mm on the sides and 17mm on the rear.
The Oerlikon 20mm AA twin gun were housed in a low, multi-sided turret, built from single layer armour, which certainly looked more suited to the hull than the Crusader Mk.III AA Mk I Bofors had done.
The tank had a crew of four: the driver/ radio operator (Mk.III), two loaders and a Commander tank/gunner who also acted as radio operator (in the Mk.II). The tank carried 600 rounds of ammunition, some of it in 60-round magazines, but these were so bulky they had to be reloaded by hand inside the turret.
The Oerlikon 20mm AA twin gun used anti tank fragmentation or fragmentation-frangible ammunition. The rate of fire was up to 450 rounds per minute, the horizontal range was 7200 m and height range 3000 m. The guns had a muzzle velocity of 830m/sec. They fired high explosive, incendiary and practice rounds, with or without tracer. 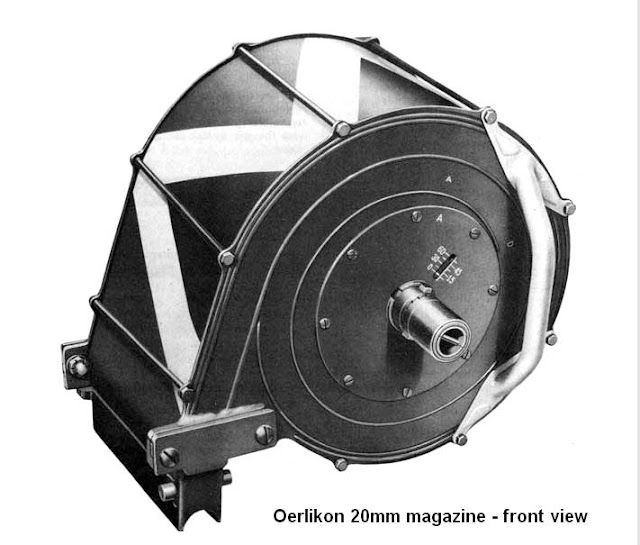 The turret was designed for three men and had two versions: the early Mk.II and late Mk.III.  Power Mountings Ltd devised the high speed transverse and elevating gear but it appears that, even in experienced hands, the turret was liable to over run the target due to inertia so the maximum transversing speed as limited to 10 deg/sec, although it could turn faster.
The turret ergonomics were poor and claustrophobic and all crew members, except the driver, were cramped and uncomfortable. A change was implemented in the Mk.III version, with the displacement of the radio from the turret to the front hull.

Urgently undertaken, the resultant redesign was the Crusader III AA Mk.III which had an improved turret with better protection for the gunner, in the form of a raised "lips" in the turret aperture, with a narrower aiming frame than the Mk.II version.

His task was made less onerous by repositioning the radio to the left of the driver, who now became the operator. For some reason, so far unexplained, the armament was supplemented in the Mk.III turret with a Vickers K, .303 MG in an armoured jacket, between the 20mm guns. Unlike the Bofors version, hydraulic power for the turret was taken from the tank's own engine.

It seems that only the Mk.III models were sent to France during the Normandy invasion and the reconquest of Europe. I have not found any phot of Mk.II model operational (so far ...).

Due to Allied air superiority in the France Invasion and subsequent battles, almost none of the AA versions (40 and 20mm) saw much action against aircrafts but they were present and prominently in the "ground" fighting (with great success against soft targets and / or infantry) from the Normandy Landing to the final victory against Germany.


In parallel with the development of the Crusader Mk.III AA, the turret armed with the Oerlikon 20mm twin gun was also installed on a Centaur (turret Mk.III upgarded) and an AEC Mk II armored car (early turret Mk.II), but as Allied air superiority was undisputed, these versions were not implemented.


The same aerial superiority also relegated the Canadian Skink AA tank project to the ground support task. the Canadian tank had an armament of 4 Polsten 20mm guns.
A total of 238 of Crusader Mk.III AA Mk.II/Mk.III was built. 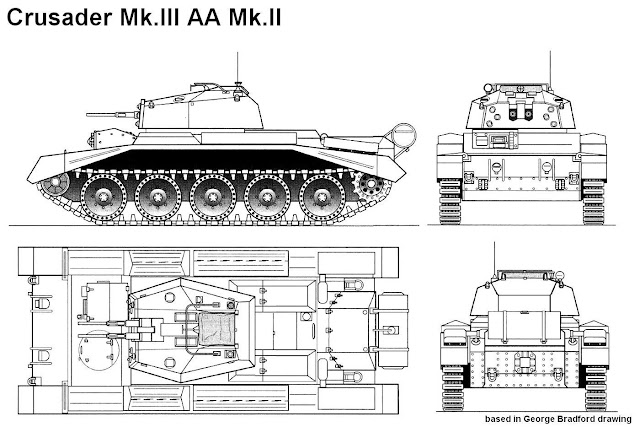 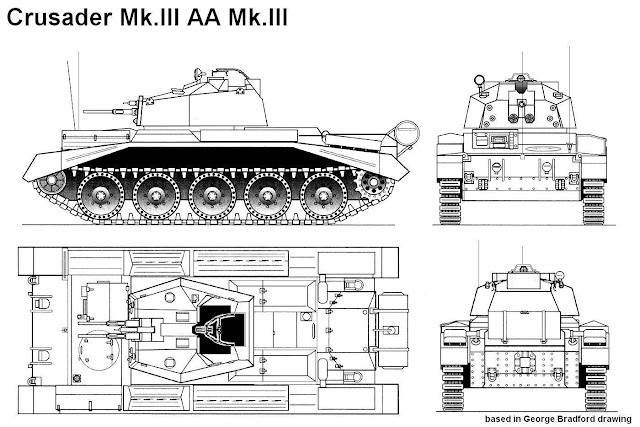 The kit:
Today we have the Italeri Crusader III Mk.III (#6444), but when I built this girl, the only option available in the market to have a Crusader AA was to buy a resin conversion kit. 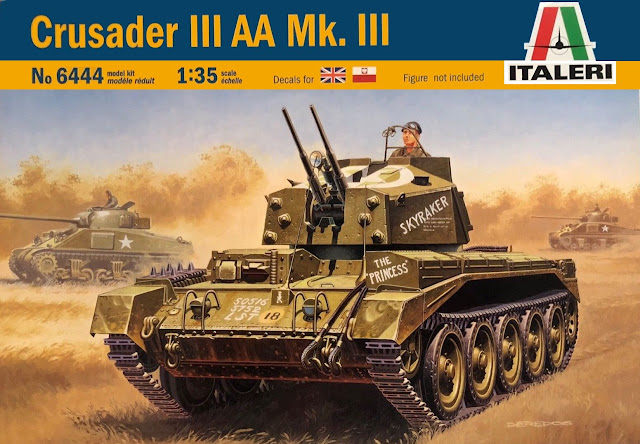 There were conversion kits from Verlinden, Accurate Armour and ARMO. My choice was the ARMO one... A very cheap find on eBay (formerly, this happened ...). 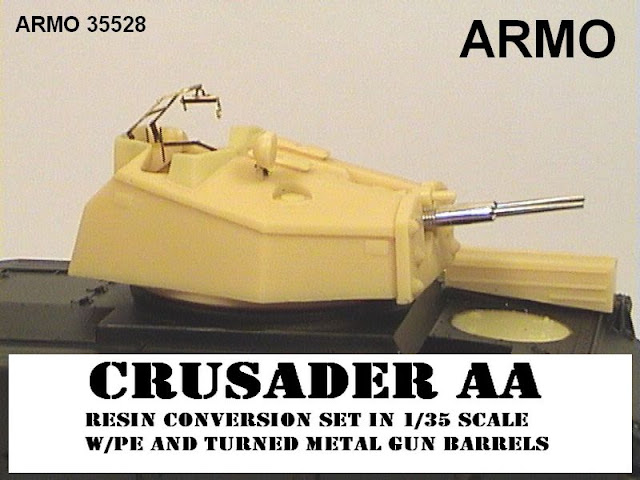 But most of the time, the cheap is expensive !! And in my case, when I purchased and built this kit, the research was still not very accessible for me. We would build and paint the kit as it was in the instructions and we would trust that things would be right! Well ... not always ..
In this case, we will see the competitors of the time: Verlinden and Accurate Armour: in those times, very expensive for my poor wallet ... and besides, very difficult to find and order (I'm talking BEFORE the high speed internet and me living in the Brazil ...). but let's discuss the other two models:


She was like this: cute, but totally wrong, especially the markings ... 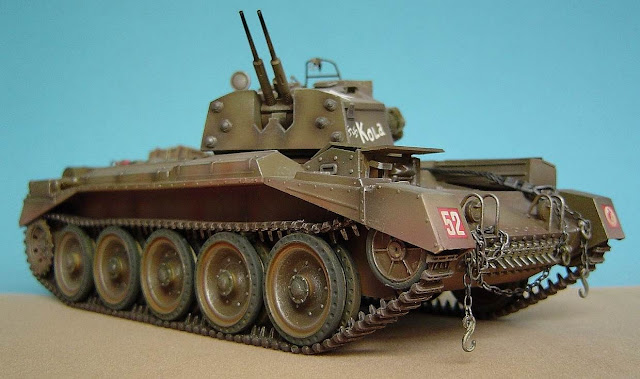 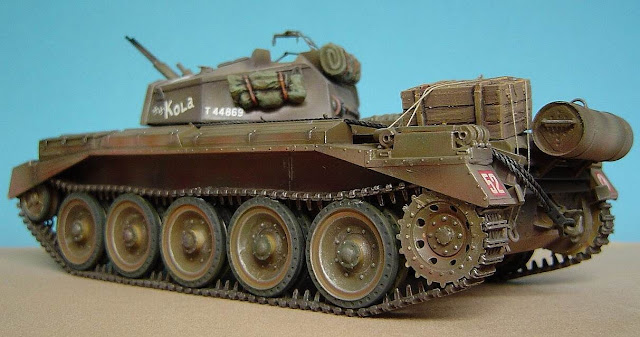 And so she was in my showcase for many, many years. The Italeri released the specific model, I started to research more seriously and depth and finally the time has come for me to try to "recycle" this style. I admit that buying an Italeri would be easier, but it's a lot more fun to rescue a "Fallen Angel" from the depths of Hell. 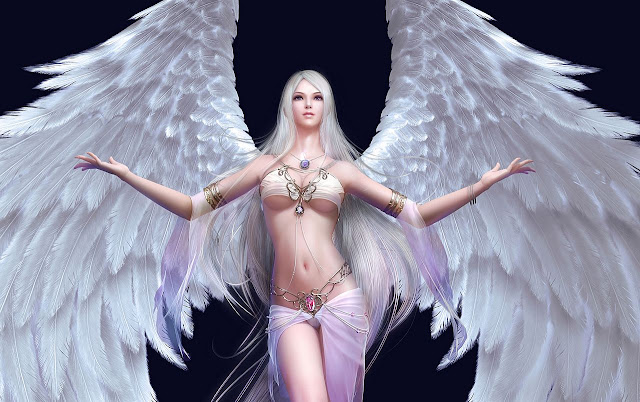 HALLELUJAH!!!
Starting by the turret: let's try to improve this thing!! (I hate to discard kits .. I think it's a childhood trauma: I wanted so much to have kits and I had no access to them ....). So, after this confession, let's go!!
The main flaws of the ARMO kit are the "flat" aspect of the turret and the edge of the tower's ceiling ... like a lip, an overhang ...
And I kept thinking: how did they make this mistake ?? my explanation is that they may have been based on old and low resolution photos. Some crusaders featured this welded grid to hang things....
Whatever the reason of the flaw, we will try to improve the ARMO turret, giving it a less flat appearance and removing the projections from the edge of the turret roof. Fix the projection is easy: just cut. To increase the height of the sides of the turret, I added 1mm to its total height by gluing a square rod of Plastruct to the base and around its perimeter (included the front shield).

My old Crusader girl without accessories in the rear with plastic surgery performed in the tower!!

Well, the girl has a more beautiful head, now ... 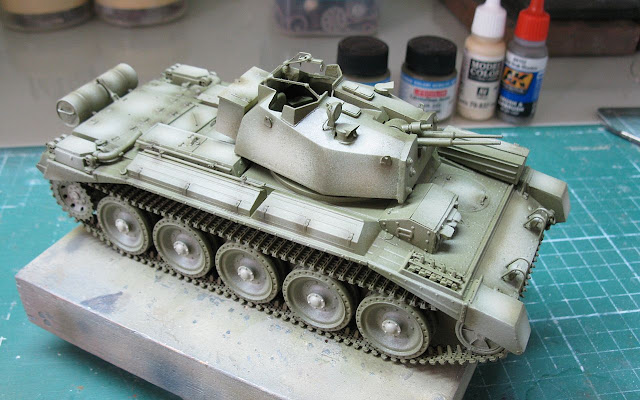 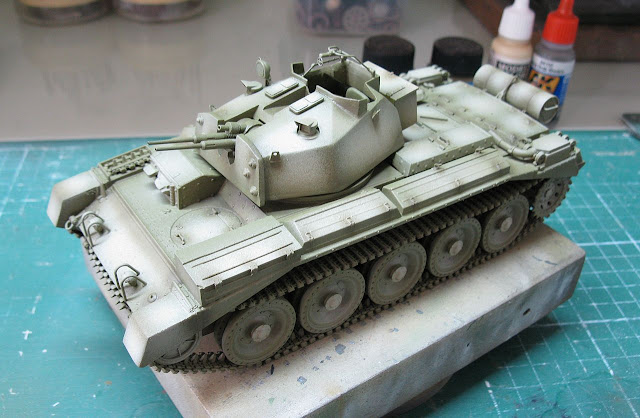 Now, I did my homework right: After researching my books and old papyri, let's represent our girl as a brave Polish warrior, rendering her services on the 1st Polish Armoured Division, promoting air protection with the 10th Mounted Rifle Regiment, an armoured recce regiment. Our girl belongs to Headquarters Squadron, fought in France, 1944. 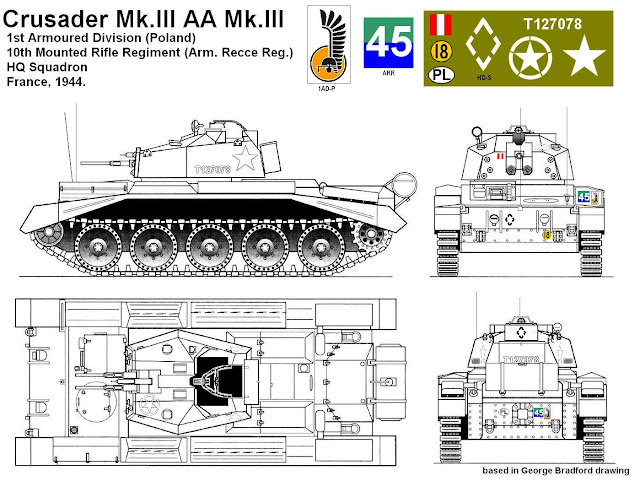 Before the decals, let's turn the surface of the painting into something smooth and shiny, to prevent the damn silvering. I decided to use a Gloss Varnish from Vallejo, instead of the Future (or Pledge) that I usually use. Let's test this Spanish alchemy ... 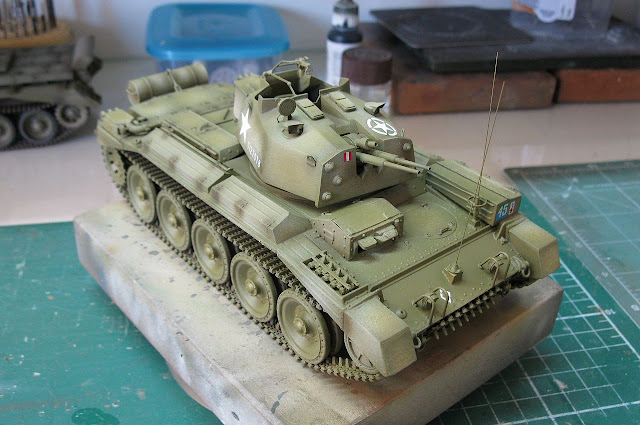 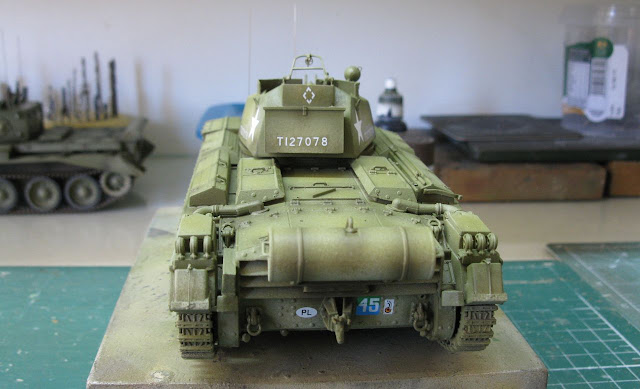 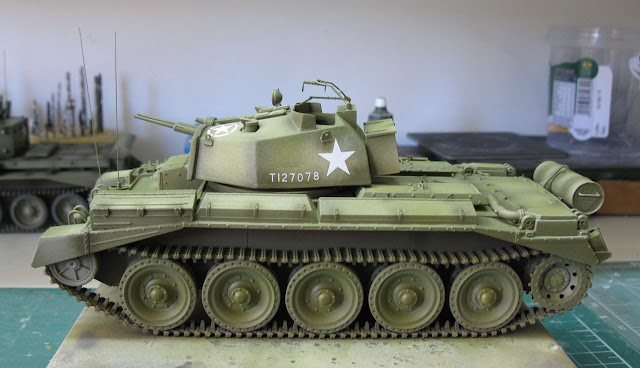 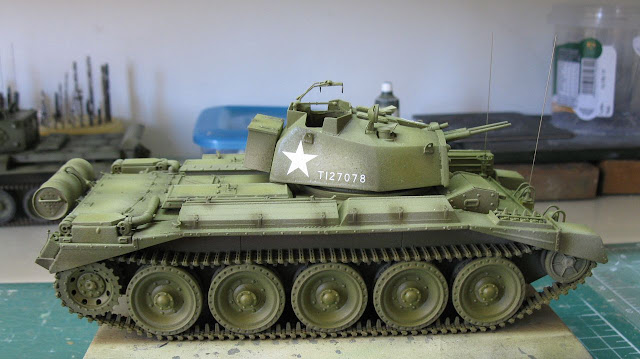 Now, its weathering time!!!   But, before..testing Value Gear stuff... These Crusaders were heavily used in the Normandy Landing and all battles asfter. Although they hardly fired against planes, they were precious as infantry support ... And operational tanks mean things on the rear decks ... 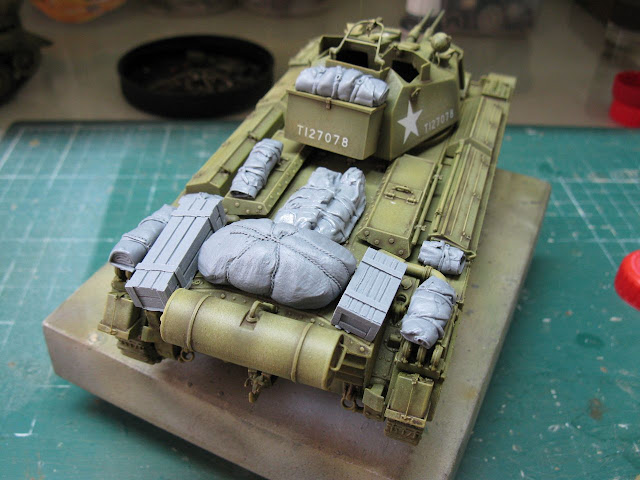 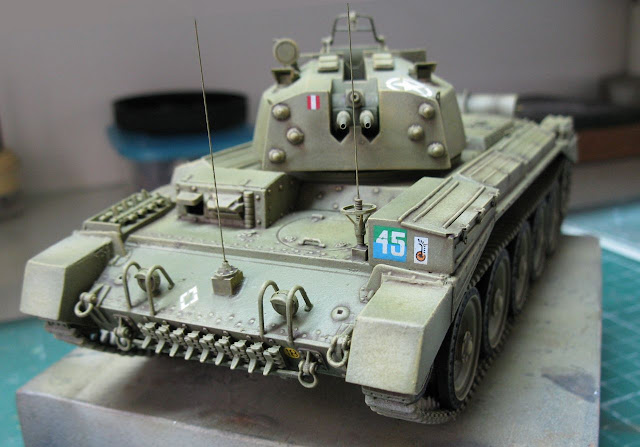 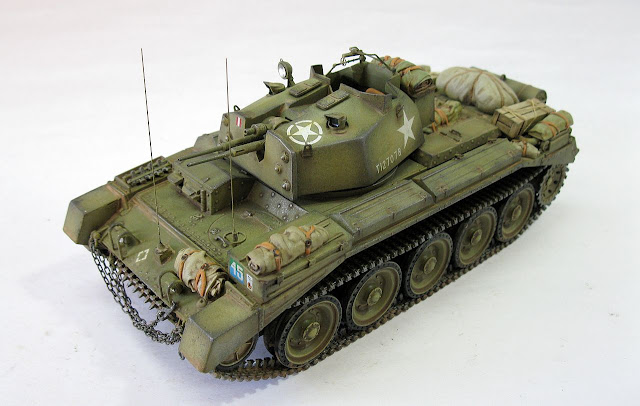 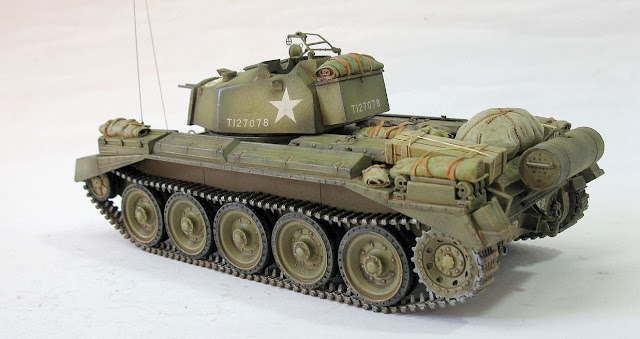 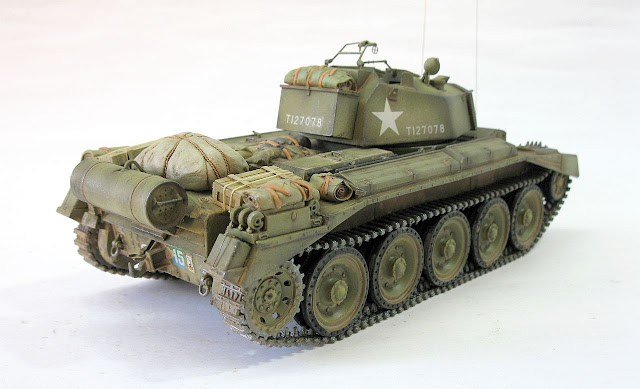 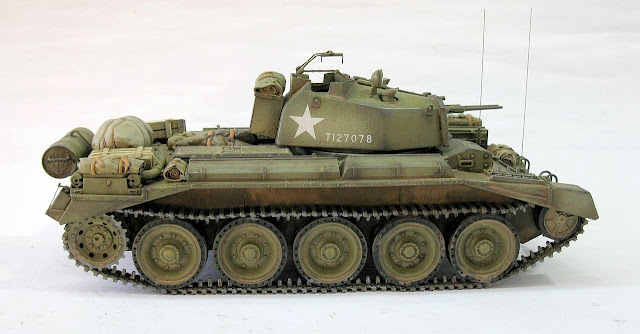 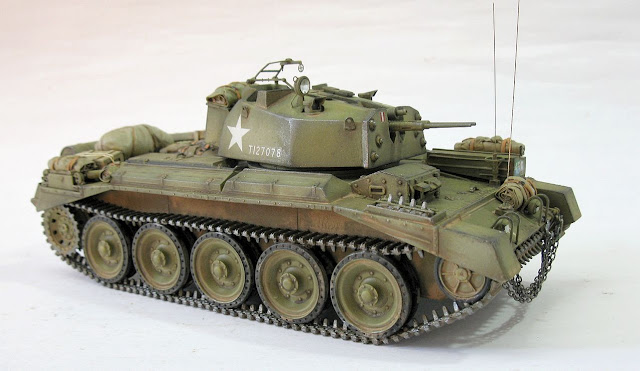 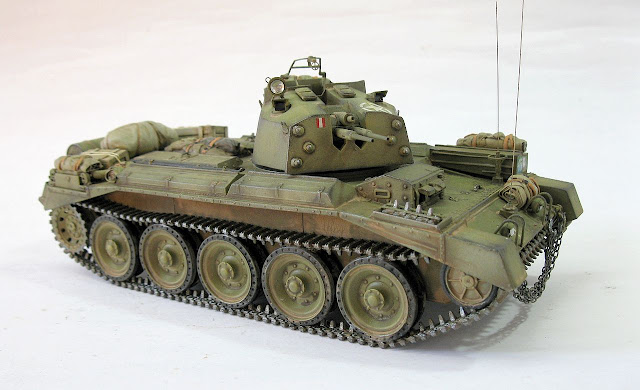 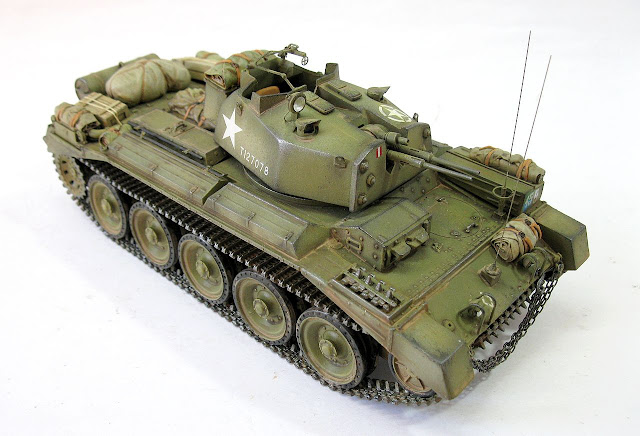 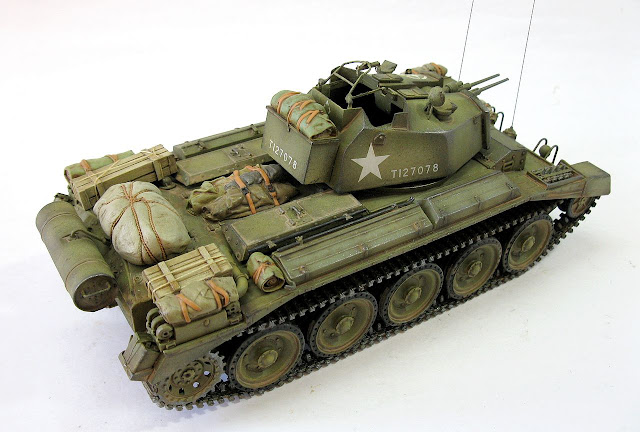 This overhauling project is over...
Thanks for watching!!