Fellow Modelers!!!
This is my project (from 2008) on this weird equipment used by the Americans in the reconquest of Europe. The M4 Sherman with mine exploder T1E3 "Aunt Jemima". 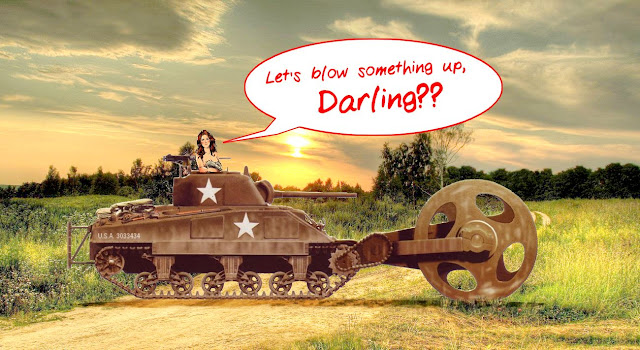 History:
Experience in the North African Theater coupled with intelligence reports on German coastal and national boundary fortifications on the European Continent, established the fact that the Allied offensive in Northern Europe would have to overcome numerous land mine fields layed by the Germans as an integral part of their defense installations. In addition, it was anticipated scattered mines and small, hastily prepared mine fields would be encountered during the advance between main lines of defense, particularly when the battle line was permitted to stabilize. Therefore, emphasis was placed upon developing an assault technique in combat training that would facilitate rapid passage of mine infested areas; with particular emphasis being placed upon the development in the Zone of Interior of specialized mine exploder equipment that could effectively clean a safe path by detonating mines, and at the same time withstand attack from enemy gunfire. Two basic types of mine exploders were developed for detonating unlocated land mines:

1-"Pressure Type" Mine Exploder: activates the mine fuse with pressure applied by a mechanical device, e.g., a roller, plunger, disc, or flail, that is relatively indestructable. In addition, this type mine exploder should be effective, maneuverable, and easy to maintain and operate. Examples:
2-"Concussion Type" Mine Exploder: activates the mine fuse or sympathetically detonates the mine charge with the force of concussion or blast obtained by detonating a nearby charge of explosives. This explosive force may also displace mines from the ground without detonating them. Examples:

But since the topic is about Aunt Jemima, we focus on this huge apparatus. The 'Jemima' consisted of nothing more than two massive steels rollers pushed in front of a tank, with one roller ahead of each tank track. Each roller was divided into five discs. Each disc was about 10 cm thick and 2,46 m in diameter. The Sherman, itself, was about 2,74 m high and the whole setup weighed in at around 26.000 Kgs. The roller chains from the Sherman sprockets drove the loosely mounted discs; the spacers were arranged and grooved to allow the discs to move. 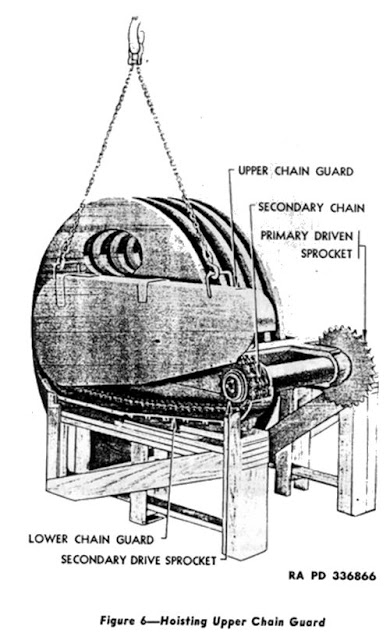 The T1E3 worked well in tests, but in service use the device proved difficult to maneuver. One account says that it took the length of 2-3 football fields for it to make a U-turn!! The 'Aunt Jemima' detonated mines by its heavy weight, but this caused severe mobility problems, when it sank into soft terrain, and other Sherman tanks were often called in to push it.
The few U.S. Units that used this device highly disliked the mobility problems and quickly lost interest in the vehicle. The British 'Crab' which flailed chains in front of a Sherman was a much better device.

The kits:
For this project, I used an old Tamiya M4 early production (35190) and a Mineroller T1E3 conversion kit (827) from Verlinden , which I bought on eBay.

When I built this beast, I modified the bogies of my Sherman mine exploder for the version with straight arms of return rollers, spoked idler wheels and spoked wheels in the bogies. 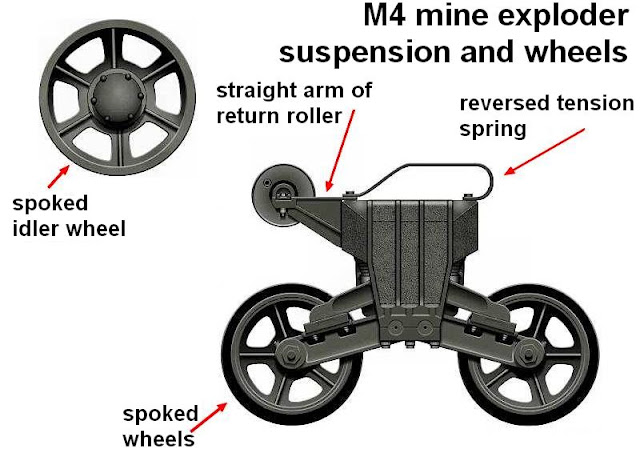 To do that, I used bogies and wheels from Academy and idler wheels from Dragon (from my spare parts box). I swapped the bogies of the Academy by Tamiya and vice versa, as was building a M4A2 Russian Academy, in parallel. The russian M4A2 Academy got the raised arms bogies (Tamiya). See the pics; 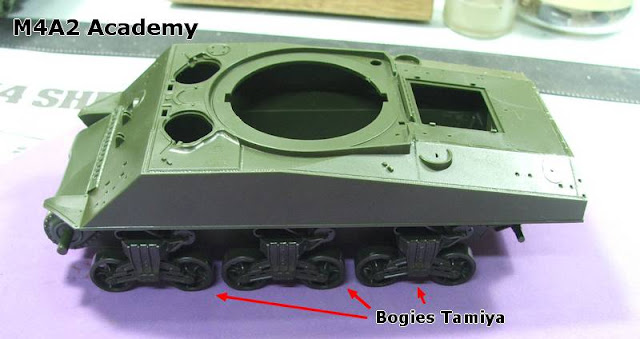 And the two hulls: Tamiya with Academy shoes and Academy with Tamiya shoes. Notice the one piece transmission cover in the M4 Tamiya Shermie. 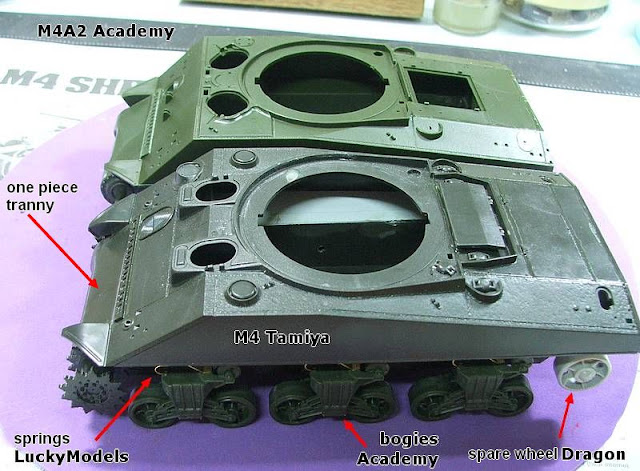 The Tamiya M4 tank was easy to built...Let's see the Verlinden conversion kit:

While the mine exploder device dried, I took the time scratching the coils in the hatches of Shermie
Well, painting time...olive-drab in shades.... 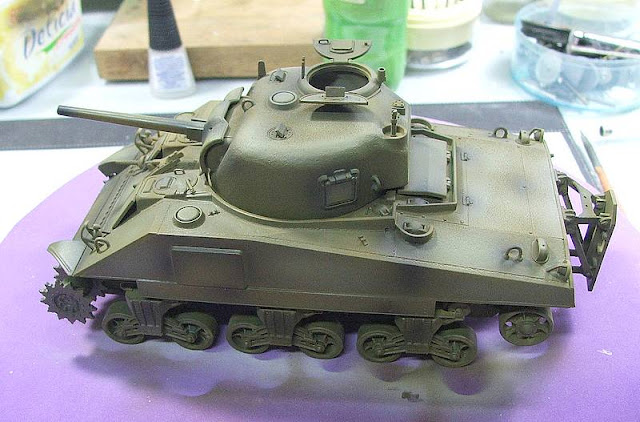 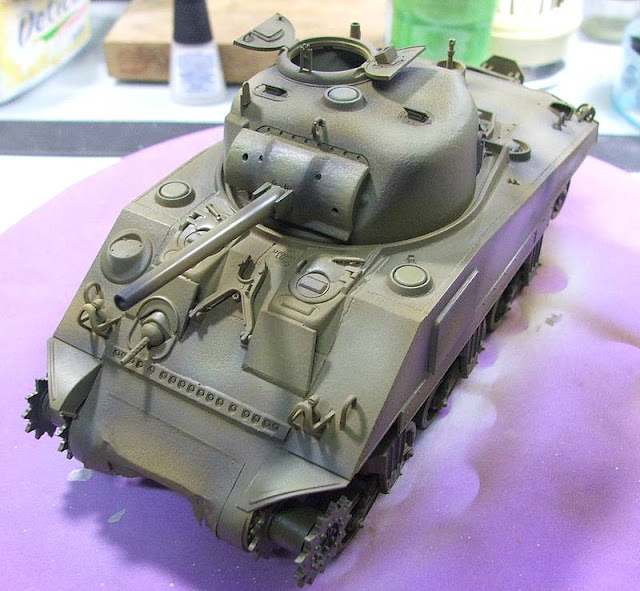 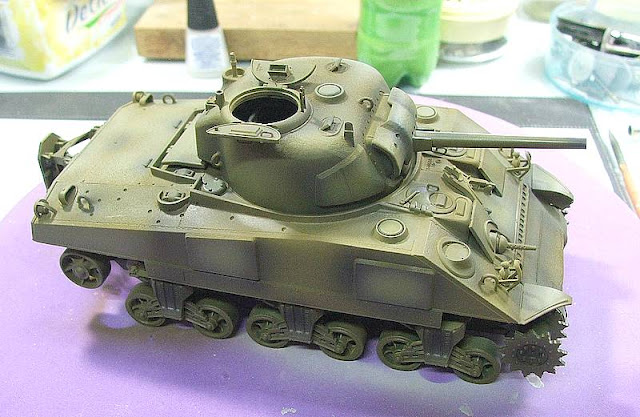 Well, the tank was almost ready when Roy Chow at Armorama, reminded me to a detail in the aft portion of the hull of the tank. Here are the words of our colleague:

"From all photos I've seen, the T1E3s with M4s used the Baldwin manufactured M4s -- characterized by a vertical rear bulkhead.For the Tamiya kit, this shouldn't be that difficult to alter..."
Wow..That was intense...
Based in this alert (thanks a lot, Roy...), I did this:
I confess that my first reaction was: I'll make a tarp and cover the wrong rear of the tank... But this would be a lazy and wrong action ... I decided to fix the tail of my tank. See the picture below: the rear hull of the M4 Sherman is vertical.
Time of surgery: 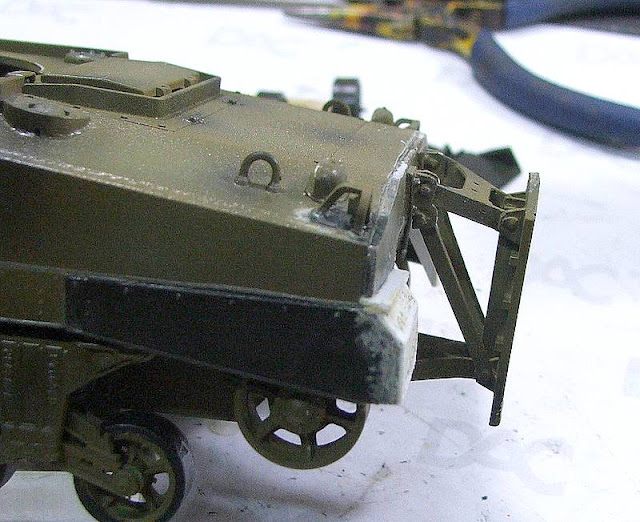 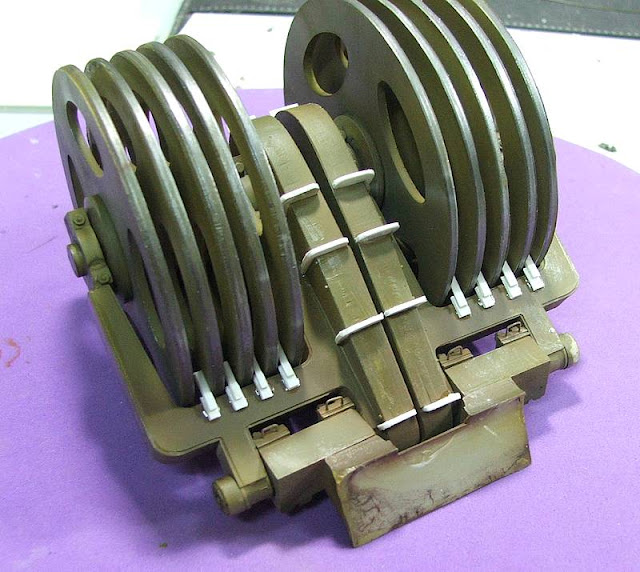 After this scare, it's time to relax, applying the decals .... 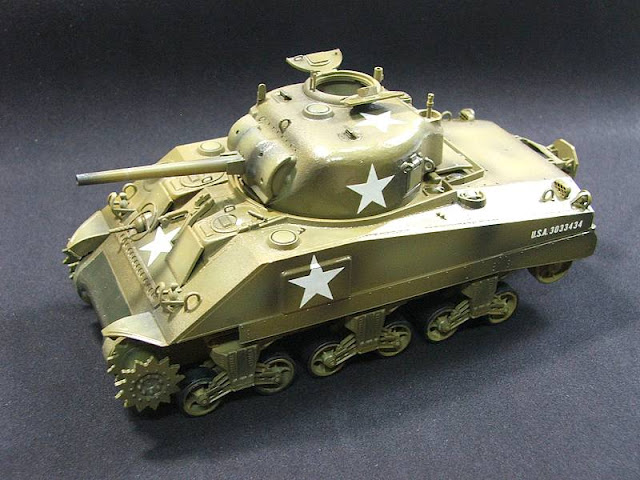 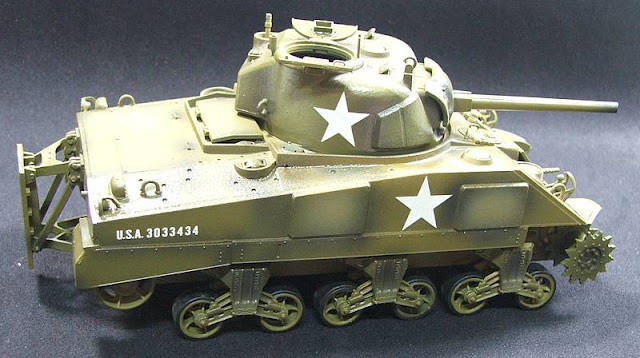 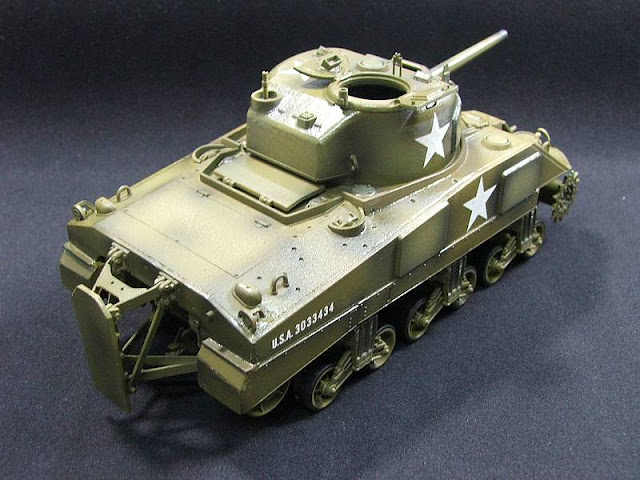 As my father said: When the head does not work, the body suffers...Let's do the right thing!!
Final touchs in the disks; 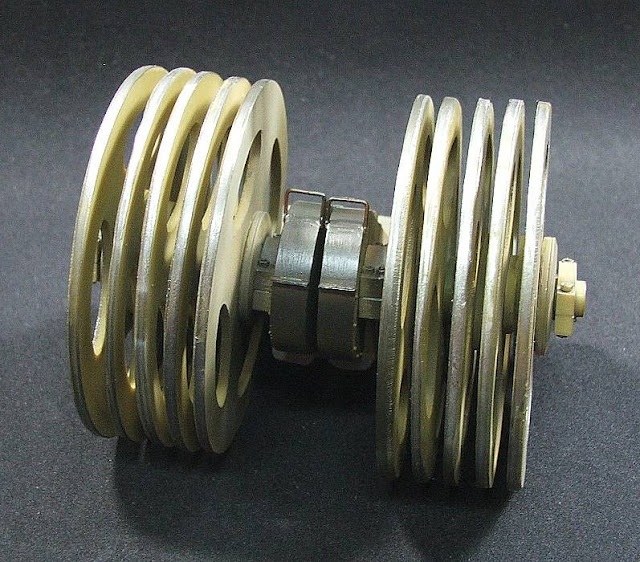 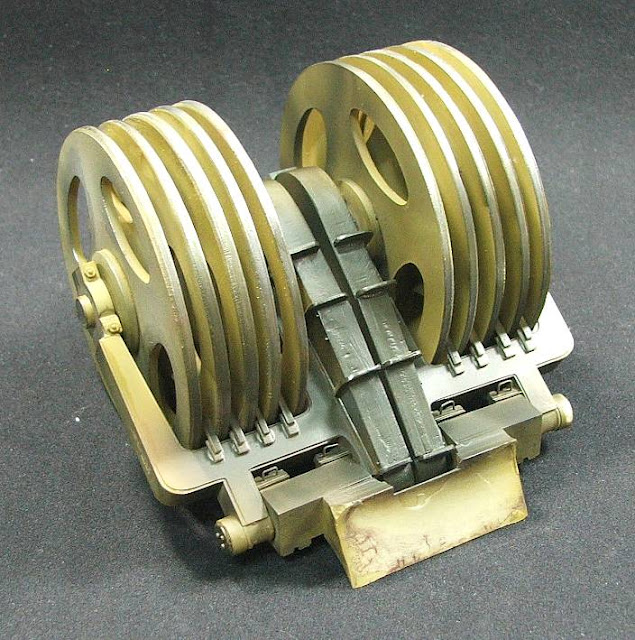 Doing crew stuff in the back of the tank:
And my medium tank M4 Sherman with T1E3 mine exploder "Aunt Jemima"  was done !!! 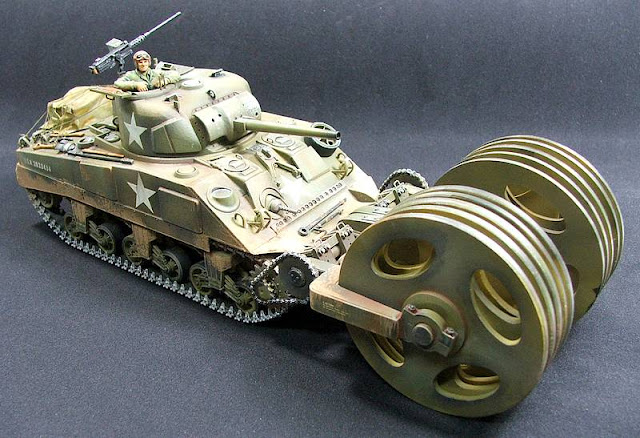 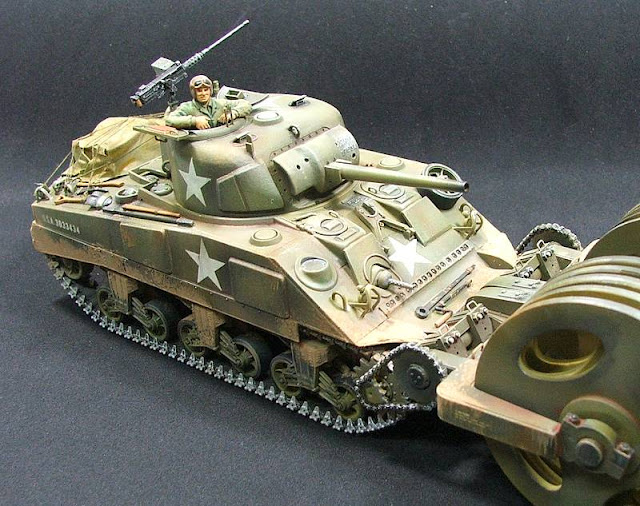 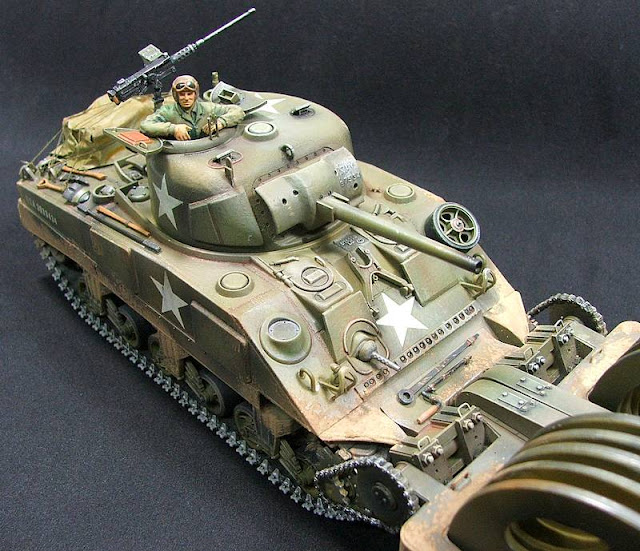 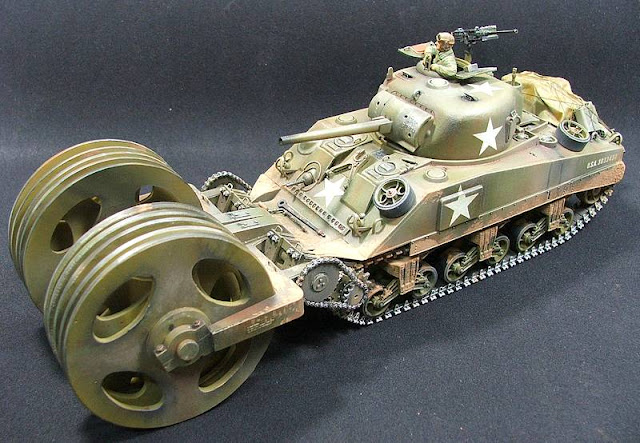 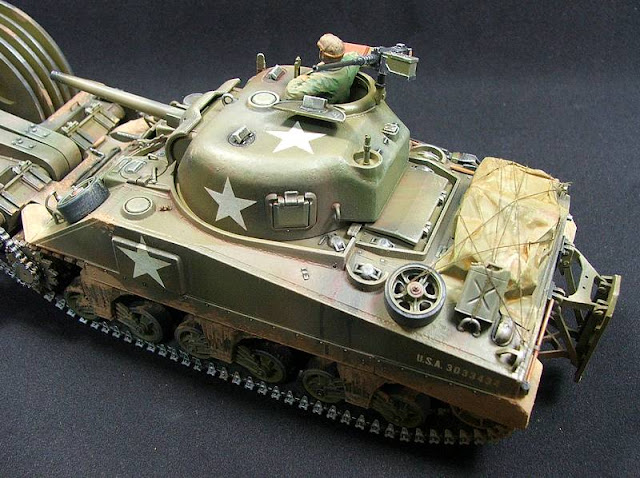 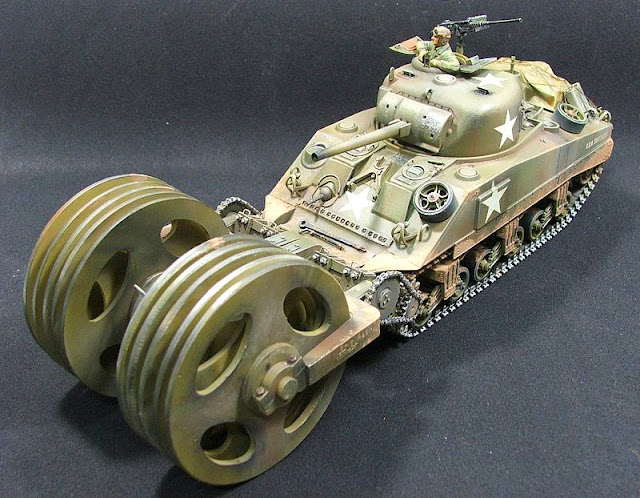 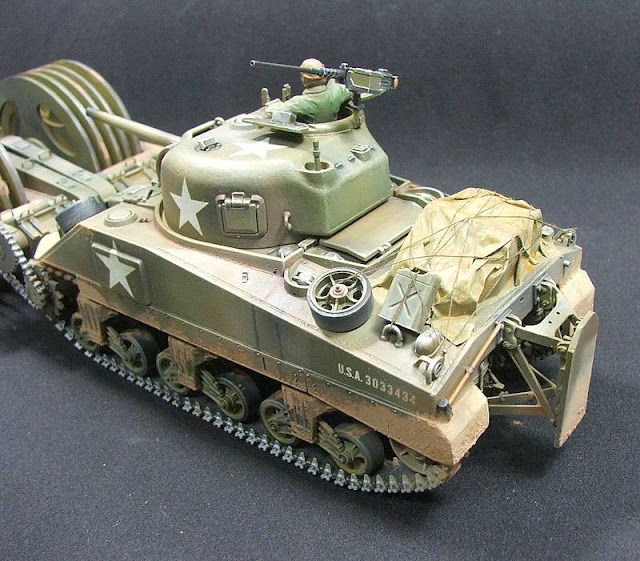 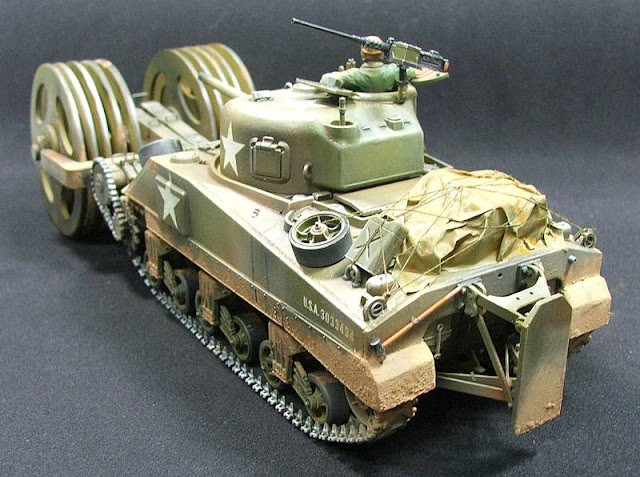 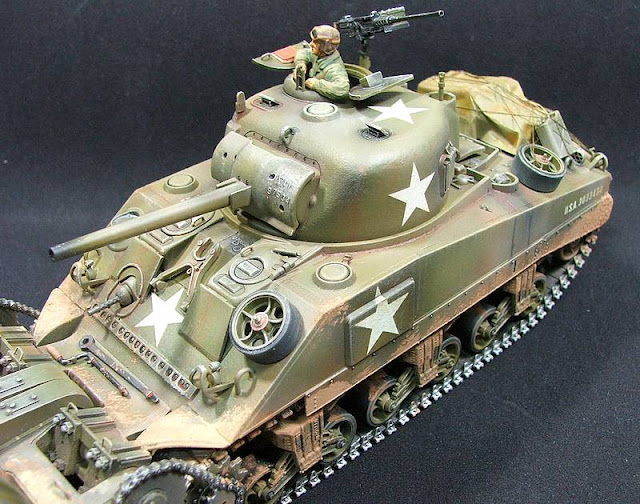