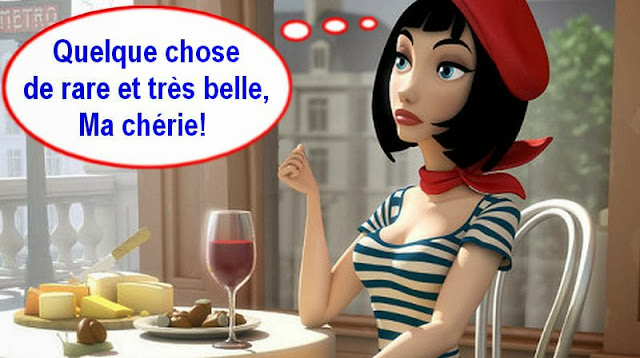 History:
The Char 2C, also known as FCM 2C, is a French super-heavy tank developed, although never deployed, during World War I. It was, in physical dimensions, the largest operational tank ever made.
The origins of the Char 2C have always been shrouded in a certain mystery. In the summer of 1916, probably in July, General Léon Augustin Jean Marie Mourret, the Subsecretary of Artillery, verbally granted Forges et Chantiers de la Méditerranée (FCM), a shipyard in the south of France near Toulon, the contract for the development of a heavy tank, a char d'assaut de grand modèle. At the time, French industry was very active in lobbying for defence orders, using their connections with high-placed officials and officers to obtain commissions; development contracts could be very profitable even when not resulting in actual production, as they were fully paid for by the state.
In December 1917, after many political intrigues and maneuvers, the first prototype, the FCM 1A, was ready to be shown to an investigating commission.
Mourret had been replaced as head of the commission by Estienne, whose good friend General Philippe Pétain, the new High Commander of the French Army, asked him to use his position to end the project. Estienne told Pétain that this was ill-advised while the public was questioning why these heavy tanks had not been produced. Besides, the allies (specifically the British and the US) would only consent to give France 700 of the new Mark VIII Liberty design if France had made at least a token effort to produce its own heavy tanks.
Thus the French authorities had to delay the project while outwardly endorsing it. Estienne had already set this course by choosing the heaviest version, the "C", for production, requiring a completely new prototype, causing a considerable delay. Then Pétain demanded unreasonably high production numbers, thus delaying planning and initiating a political row.
Pétain asked for 300 heavy tanks to be ready by March 1919, causing a quarrel to erupt between Clemenceau, who was both Prime-Minister and Minister of War, and Louis Loucheur, the Minister of Armament, who felt it was impossible to provide the labour and steel required. Meanwhile, Estienne and Pétain complicated the issue with further demands. Pétain asked for special pontoons, and Estienne demanded battering rams and electronic mine detectors to be fixed. When the war ended, not a single tank had been built.
At first, the production order for the Char 2C was cancelled. Despite the end of hostilities, however, strong political pressure to adopt new heavy tank projects remained, as there was now a considerable surplus capacity in the heavy industry. To stop this, the Direction de l’Artillerie d’Assaut on instigation of Estienne decided in April 1919 to procure ten Char 2Cs after all, and use this as an argument to reject any other projects. This wasn't completely successful; as late as 1920 it was proposed to the Section Technique des Appareils de Combat to build a 600-ton tank with 250 mm armour. At FCM Jammy and Savatier finished the Char 2C prototype, the other nine tanks being built almost simultaneously; all ten were delivered in 1921 and modified by the factory until 1923. They would be the last French tanks to be produced for the home market till the Char D1 pre-series of 1931.
Initially numbered 1 to 10, they were later numbered and named as follows: #90 Poitou, #91 Provence, #92 Picardie, #93 Alsace, #94 Bretagne, #95 Touraine, #96 Anjou, #97 Lorraine (later renamed Normandie), #98 Berry, #99 Champagne.

The Char 2C had a loaded weight of 69 tonnes, partly because of its armour - 45 mm at the front, 22 mm at the sides, but much of it just because of its huge size. The armour was among the thickest of World War I-era tanks, though by modern standards this would be considered thin. It is still easily the largest tank ever taken into production. With the skid tail fitted, the hull was over twelve metres long.
Within its ample frame there was room for two fighting compartments. The forward compartment was crowned by a three-man turret (the first such in history) mounting a long 75 mm gun, and the second, at the rear of the tank, was topped by a machine gun turret. Both turrets had stroboscopic cupolas.
The three independent 8 mm machine gun positions at the front gave protection against infantry assault.
The Char 2C is the only super-heavy tank ever to attain operational status — a super-heavy tank is not simply a tank that is very heavy but one that is much heavier than regular tanks of its period. The next operational tank to approach its weight would be the German Tiger II heavy tank of World War II.
The fighting compartments were connected by the engine room. Each track was powered by its own 200 or 250 hp engine, via an electrical transmission. Top speed was 15 km/h. Seven fuel tanks, containing 1,260 litres, gave it a range of 150 kilometres. The suspension contained 39 interleaving road wheels on each side, making for a total of 90 wheels on the tank.
To man the tank required a crew of twelve: driver, commander, gunner, loader, four machine gunners, mechanic, electrician, assistant-electrician/mechanic and a radio operator. Some sources report thirteen, probably due to pictures of the crews that included the company commander.
The ten tanks were part of several consecutive units, their organic strength at one time reduced to three. Their military value slowly decreased as more advanced tanks were developed throughout the 1920s and 1930s. By the end of the 1930s they were largely obsolete, because their slow speed and high profile made them vulnerable to advances in anti-tank guns.
In 1926 (some sources cite 1923), the Champagne n° 9 (some fonts cite the Char n°10 Poitou, too) was modified to Char 2C bis, an experimental type armed with a 155 mm howitzer (possibly a variant of the 155 C Mle1917 Schneider) in a casted turret. New engines (two Sautter-Harlé engines 6-cyl 250hp/each) were fitted and the machine guns in the side positions were deleted. In this configuration the tank weighed perhaps 74 tons. Though, the changes were only temporary: the vehicle was brought back into its previous condition in 1934 (some fonts cite that the "Champagne" returned back to its original state in the very same year). The new casted turret was used in the Tunisian Mareth Line.


Between 15 November and 15 December 1939 the Lorraine, as the company command tank, was experimentally up-armoured at the Société des Aciéries d'Homecourt to make it immune to standard German antitank guns. The front armour was enhanced to 90 mm, the side to 65 mm. In this configuration, weighing about 75 tons, the Lorraine had at that time the thickest armour of any operational tank, and is probably still the heaviest operational tank ever.
Nevertheless, during the French mobilisation of 1939, all ten were activated and put into their own unit, the 51st Bataillon de Chars de Combat. For propaganda, each tank had been named after one of the ancient regions of France, numbers 90-99 being named Poitou; Provence; Picardie; Alsace; Bretagne; Touraine; Anjou; Lorraine; Berry; Champagne respectively. In 1939, the Lorraine was renamed Normandie. As their main value was in propaganda, the giants were kept carefully out of harm's way and did not participate in the September 1939 attack on the Siegfried Line. They were used instead for numerous morale-boosting movies, in which they were often shown climbing and crushing old French forts. To the public, they obtained the reputation of invincible super tanks, the imagined dimensions of which far surpassed the actual particulars.

Of course, the French commanders knew perfectly well that this reputation was undeserved. When the German Panzerdivisionen, in the execution of Operation Fall Rot, ripped apart the French lines after 10 June 1940, the decision was made to prevent the capture of the famous equipment. All were to be sent to the south by rail transport.
On 15 June the railway was blocked by a burning fuel train, so it became incumbent to destroy the tanks by detonating charges. Later Goebbels and Göring claimed the tanks were hit by German dive bombers. This propaganda lie was to be repeated by many sources. One tank, the Champagne, was nevertheless captured more or less intact and brought to Berlin to be exhibited as a war trophy. In 1948 this tank disappeared, causing many to speculate it still survives at the Russian Tank museum in Kubinka. 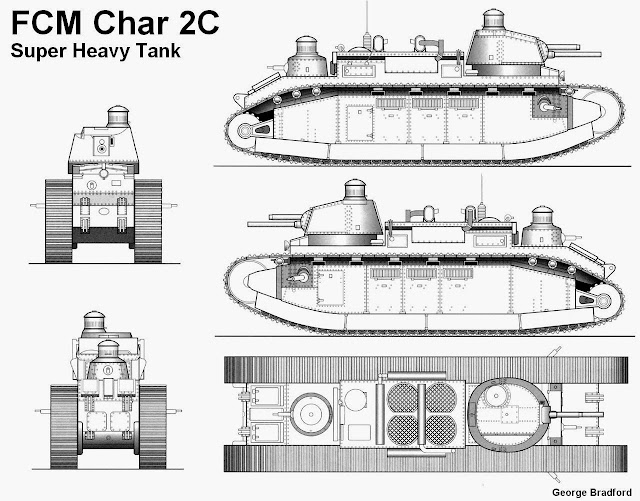 The kit:
Starting by the book, by the wheels...lots of wheels:

Bien, this French Girl is a delight to build...Plastc with a great texture, great fittings and almost no cleaning job ...I just had loved the building of the A-39 Tortoise... With this kit, I was a fanatic fan of MENG! 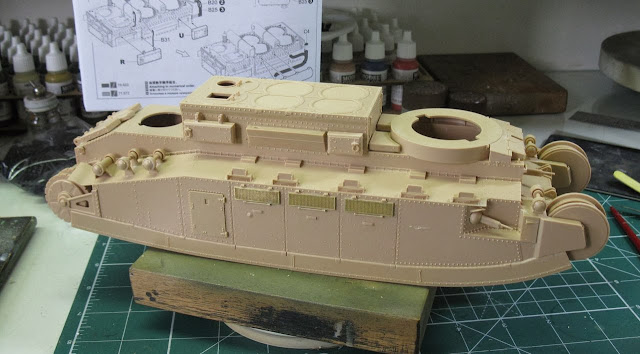 Now, it´s time for the tracks ( click system and cleaned by factory...ulá-lá!!) and painting...
Colors: Green Vallejo
My Girl will be NORMANDIE:

Attention!!!
Christophe Jacquemont , in Missing-Lynx, alert us about a misprint in the French flags of the MENG kit. The French flag is with inverted colors in the decals of Normandie and Poitou. See below:
To fix this flaw, cut the little flags and turn 180°...Easy. But I only discovered this later ... I had already applied the decal. I'll fix the error, soon !!!


About Coat of Arms, MENG  provides these two colorful versions in the original decal sheet of the kit. 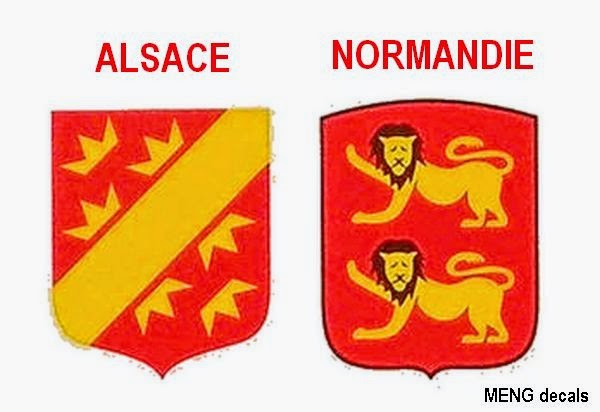 Here, a curious fact: The coat of arms of Normandy with correct heraldry would be Leopards and not Lions, as in the MENG decal.
This led me to believe in a search error on the part of the MENG, but observing a vintage photo, the coat in the tank turret NORMANDIA presents the coat with two lions and not two leopards.
MENG historically reproduced the "correct" tank's coat of arms, indeed. Are the crewmembers wrong, in those times?? Who would know?? 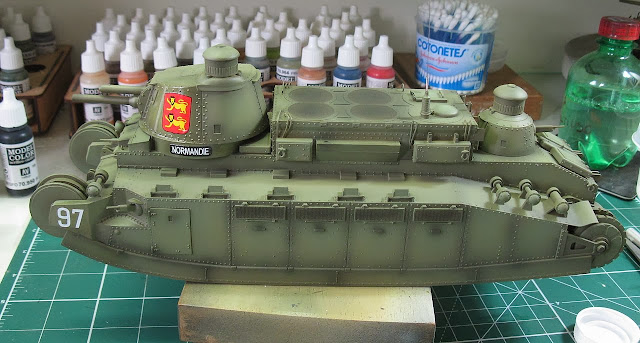 Now, she will sleep and tomorrow, weathering... 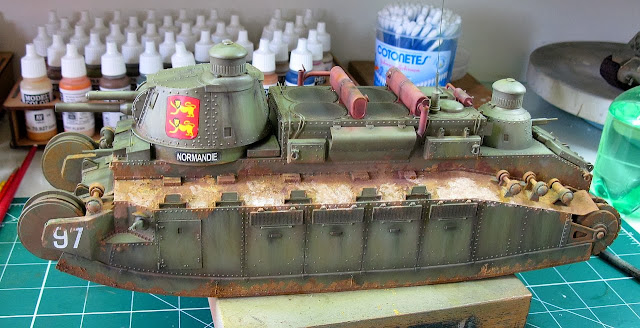 The direction of the links of the tracks follow the MENG instructions and actual photos:
But this other Char 2C shows the links in reverse position ...
Apparently, the two forms were used ... I opted for the booklet option. 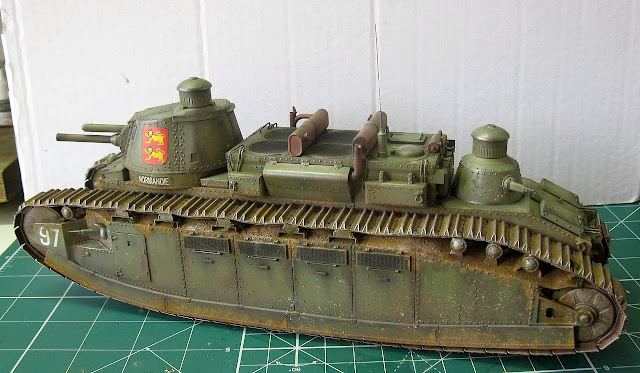 The kit is practically ready .... But I would like to build the skid tail that was used by these monsters. I found several photos of the apparatus in place: 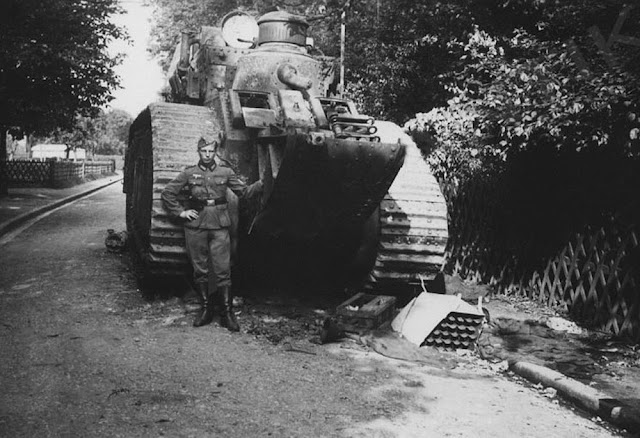 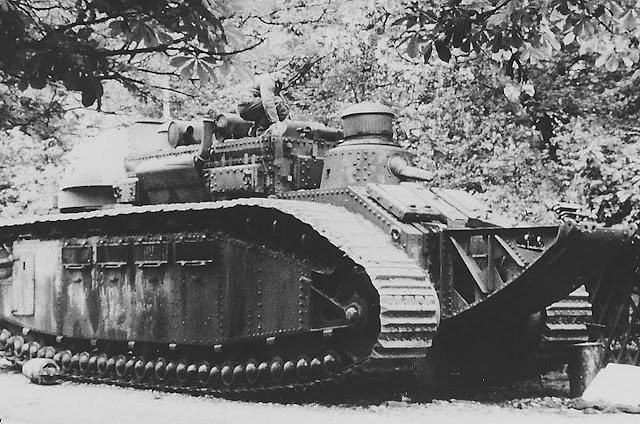 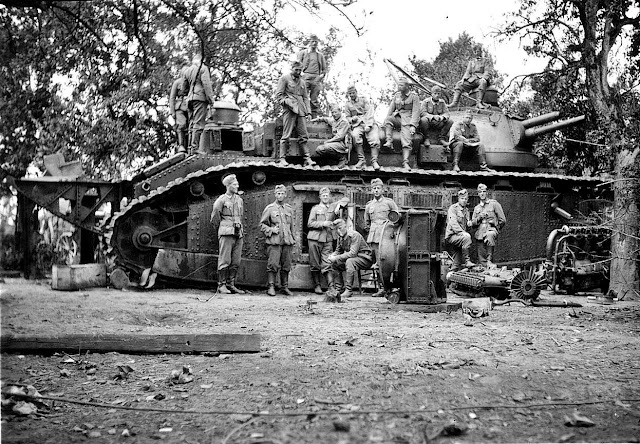 This apparatus was loaded (unmounted) by trains that carrying the tanks. The attachment points of the rear skid tail were the same of the rail carriers: 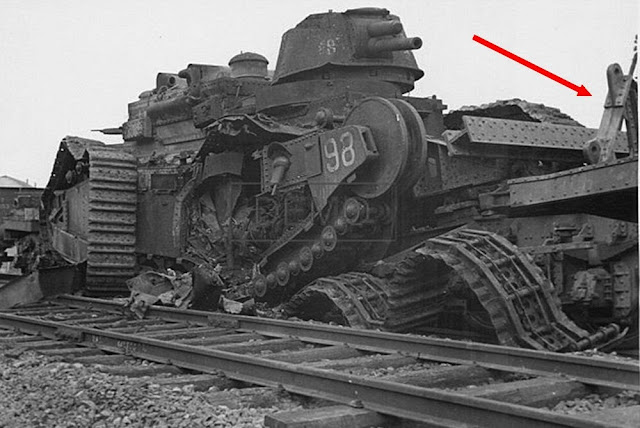 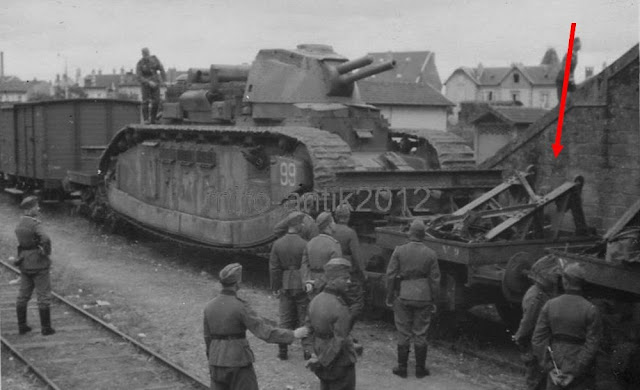 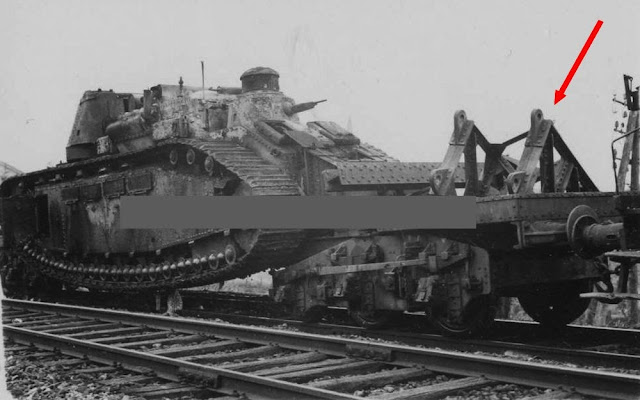 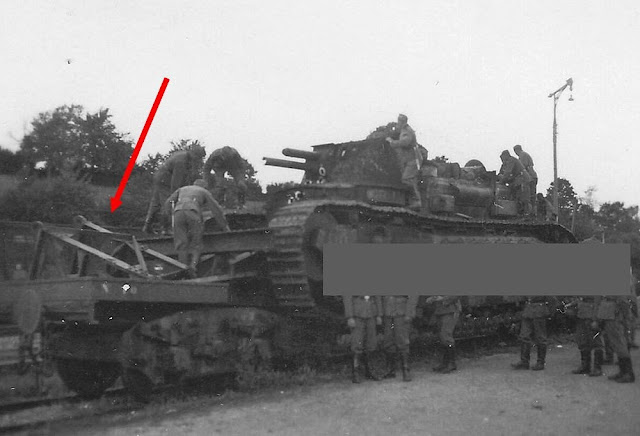 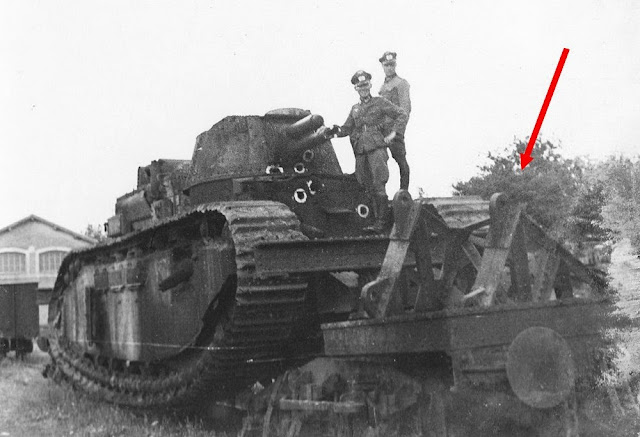 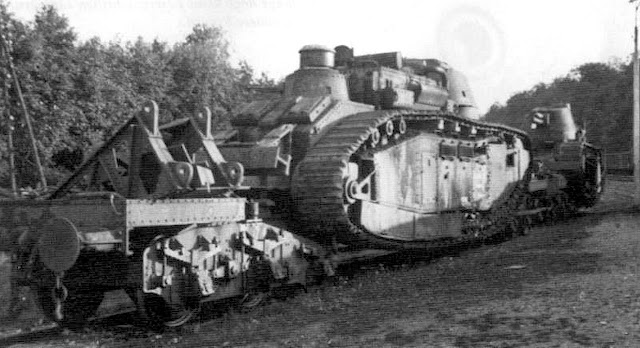 Well, the way is to do the skid tail in scratch .... I made a change in a profile available on the internet, to guide the project: 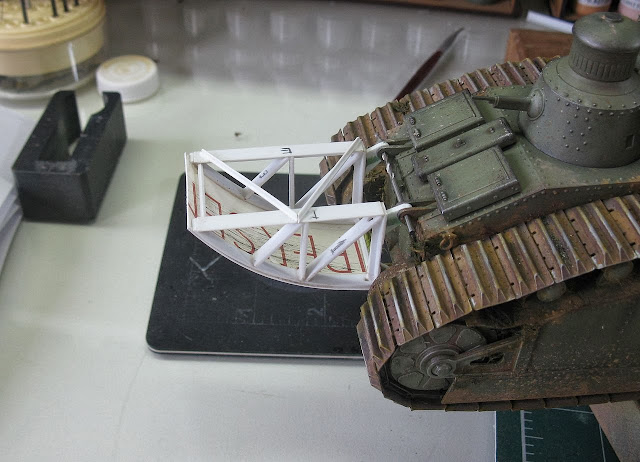 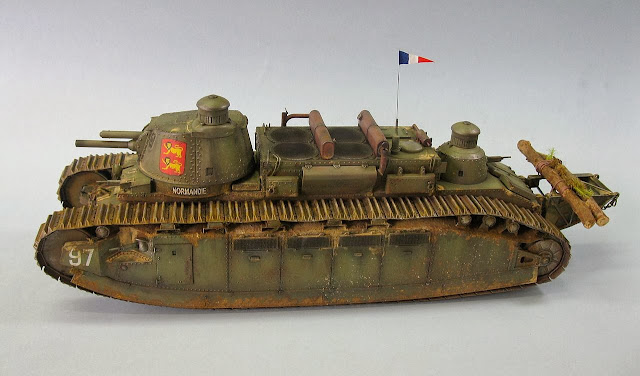 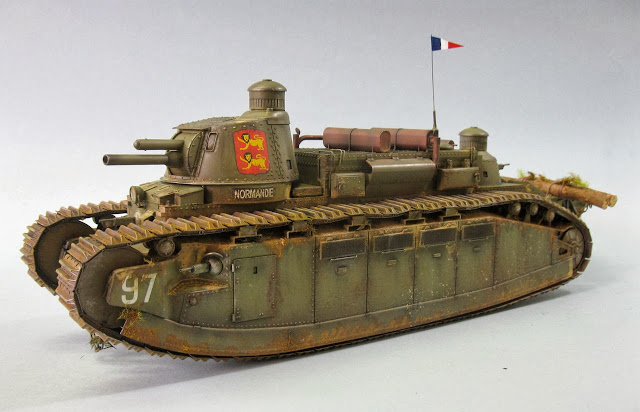 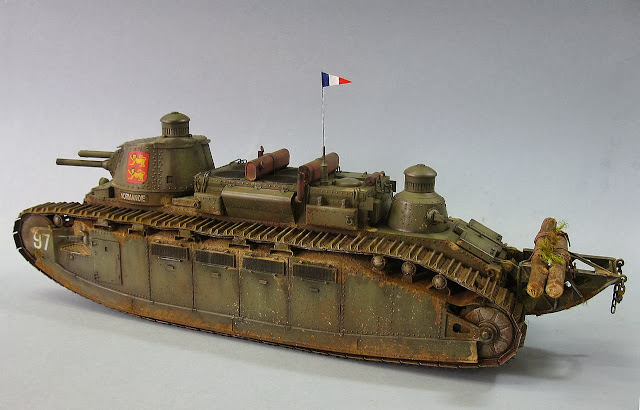 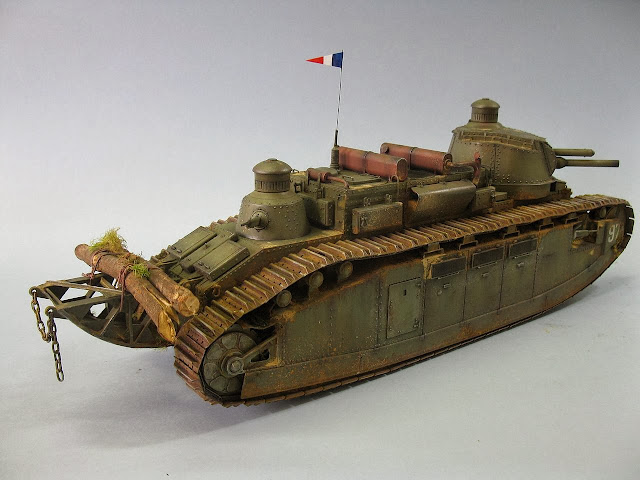 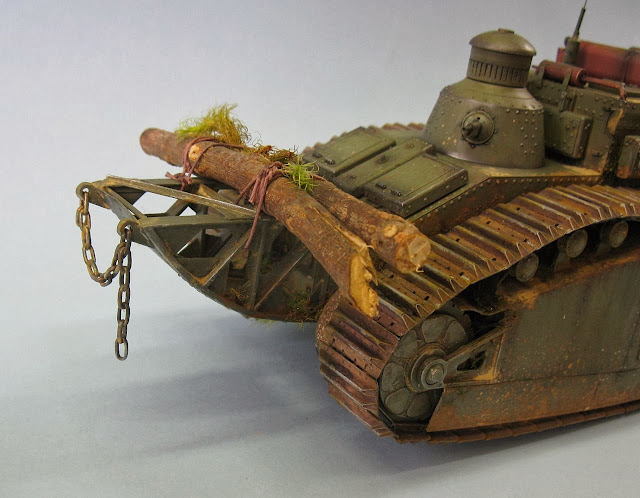 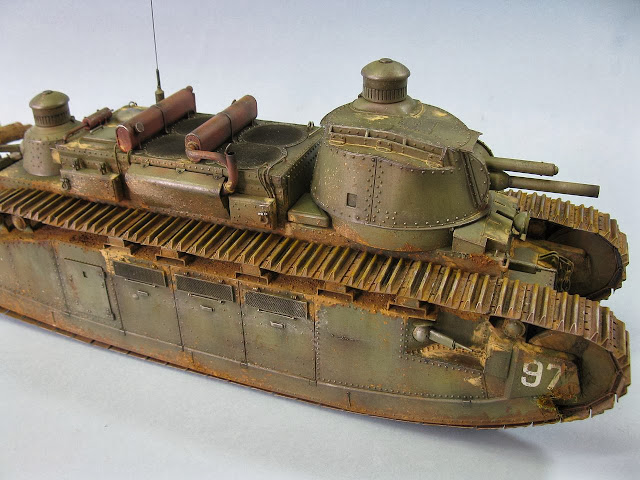 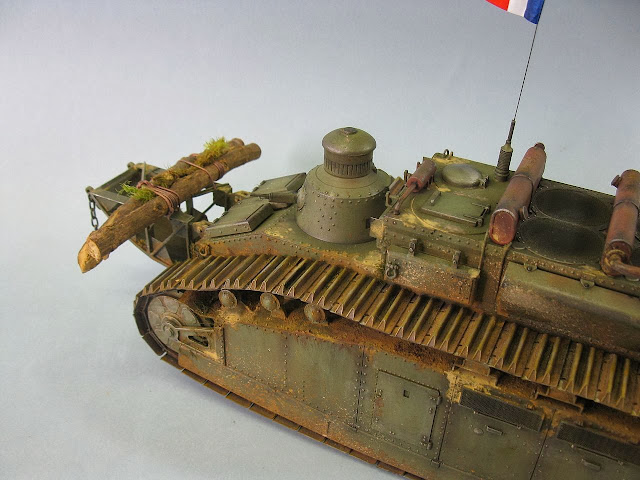 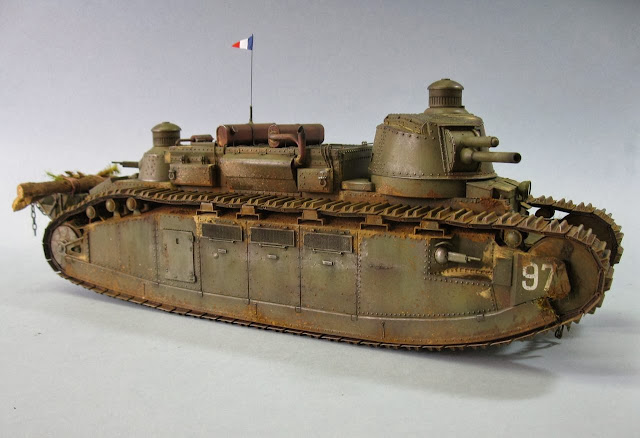 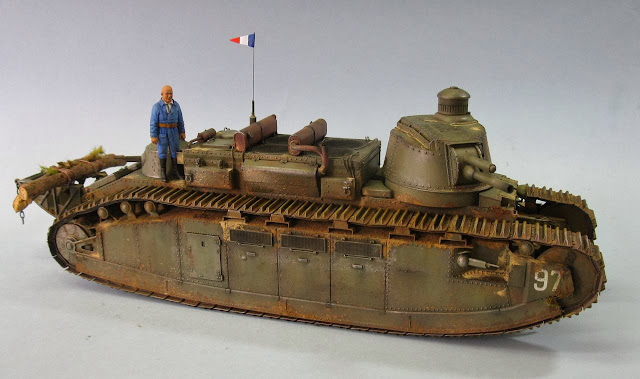 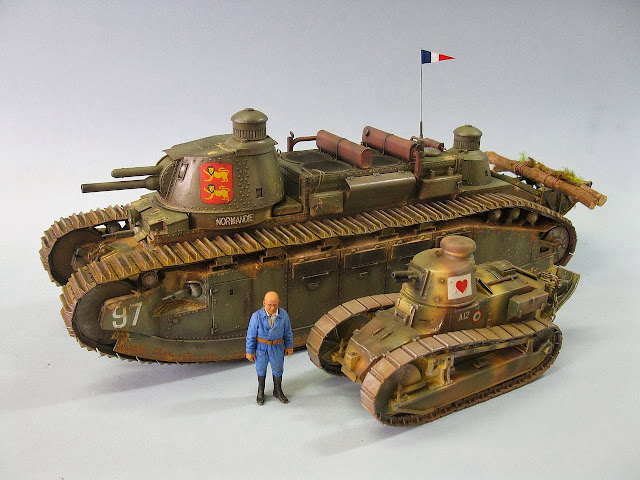 Well, Gents, the MENG kit is wonderful...Very enjoyable to build, with good instructions booklet and excellent plastic. The tracks are wonderful ... The only shortcoming is the wrong impression of the French flags in the decals, but easily corrected. I recommend without reservation!
Au revoir !!!
às fevereiro 09, 2014