Well, Gents...This weekend was long in Brazil, because of Carnival ...I took advantage of the free time to tackle a project that has been tempting me for a long time since I found this photo on the Internet:
Why I like so much of the rare things?? I was only seeing this picture ...and the ideas began to simmer in my mind ...First of all, a drawing: I try to put this drawing in 1/35 scale: You can try to print and check the wheelbase measurement. Use the "real-size" print resolution. 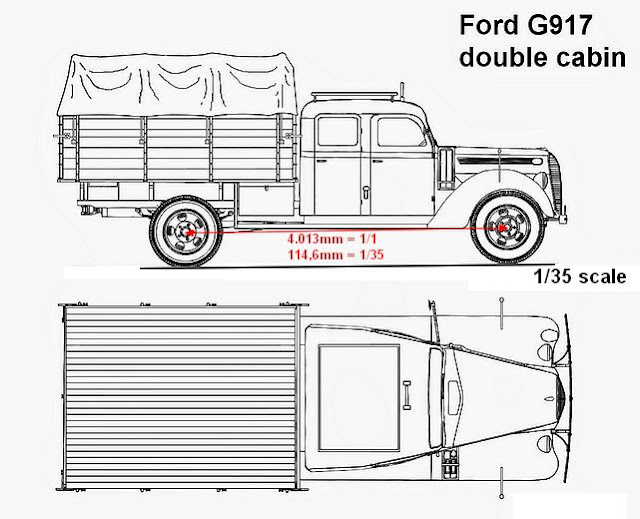 The history of the Ford Company is mixed with the history of the Automobile Industry. Henry Ford, with its capacity for innovation, had built an empire in the 30s, with manufacturing facilities in the United States (Dearborn MI), Britain (Dagenham), Canada (Windsor), Australia (Melboume), South Africa (Port Elizabeth), New Zealand (Lower Hutt), France (Poissy and Asnieres), Holland (Amsterdam), Belgium (Antwerp), Romania (Bucharest), Germany (Cologne) and Soviet Union (Gorki). Ford vehicles always have been characterized by the ruggedness and standardization, and the products from these various factories usually exchanged among themselves parts and technology.


With the advent of World War II, during the Nazi expansionism, the Germans used Ford vehicles and found Fords in almost all theaters of war, which greatly facilitated its maintenance and operation. The Mechanical Companies and soldiers were accustomed to models and mechanical peculiarities of these vehicles. An example is the use of vehicles manufactured by the Germans and captured in Belgium, Holland, France and those manufactured by allied Romania. The Russians not only used the Fords (known as GAZ), but the factory Gorki was nothing more than the old industrial plant that existed in Berlin-Plotzensee, in 1925-1931. The whole factory was sold and moved to Gorki, in the 30s.


In Germany, the Ford Motor Company AG was founded in Berlin in 1925, for the assembly of American products. In the 30's, as cited before, this plant was sold to the Russians and in 1931, the factory in Niehl-Cologne was inaugurated.
At the beginning, the Ford AG was building only the Ford AA Truck with parts produced in the United States. These trucks were more produced in  the GAZ factory in Gorki, Russia.
In 1935 the Ford AG started producing products suited for the German market, with some independence of American headquarters. The first "Germans" models of trucks produced by the Ford AG were the Ford BB, 1.5 and 2.5 tonnes, produced from 1932 to 1939. These vehicles were extremely robust, with a 4-cylinder engine derived from the famous Ford Model T, with 52 hp.
The Ford BB truck was followed in the production line by the Commercial V8-51, from 1936. The v8-51 truck was more robust, with a great v8 engine with 85 hp, while keeping the same typical transverse leaf springs of Ford, in the front axle.
In 1939, the factory was renamed Ford Werke AG, with its production being completely diverted to the war effort. At this time, the standard truck was the Ford G917, 3 tons, v8 engine with 91 horsepower. It was produced until 1942.

At the end of 1942, the G917 was succeeded by Ford V3000 also 3 tons but with a front suspension more robust and simpler fabrication. This model remained in production in the final period of the war and was the standard model of the postwar period. 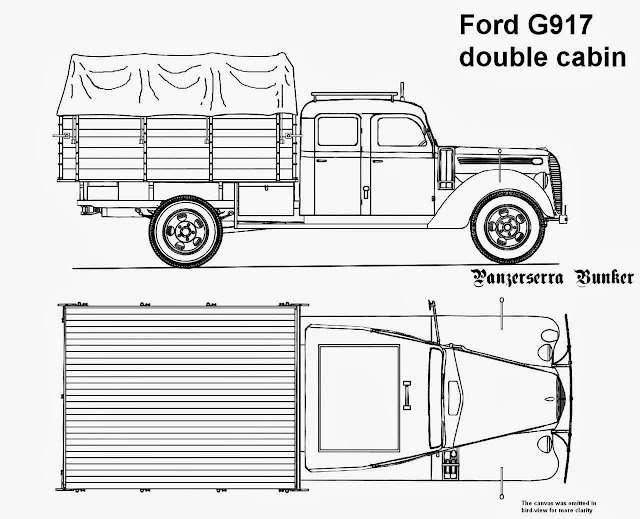 The kit project:
After that, let's "cut" an ICM kit to make this project:
Tally ho!!! 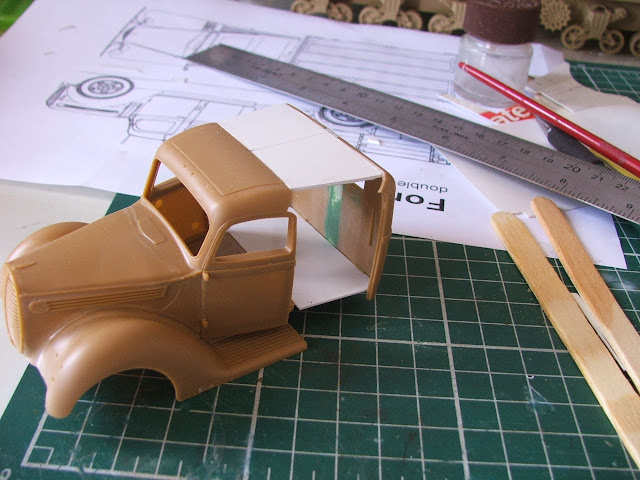 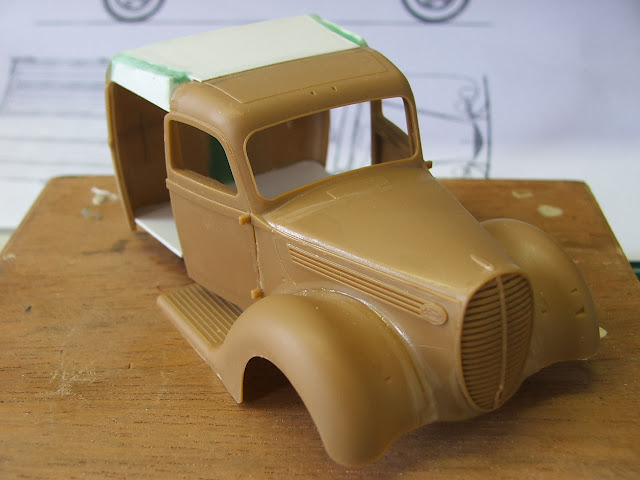 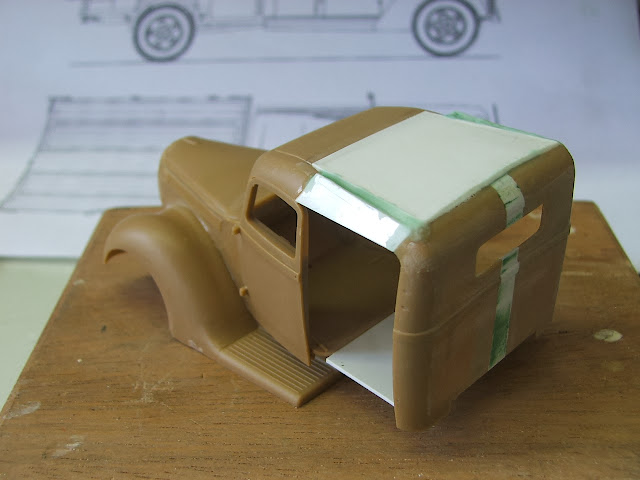 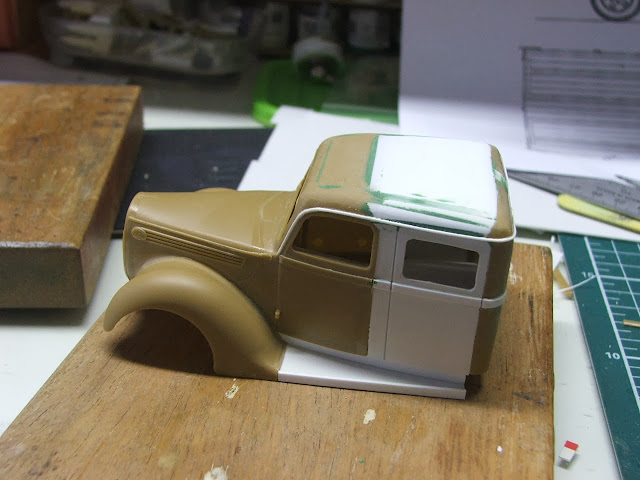 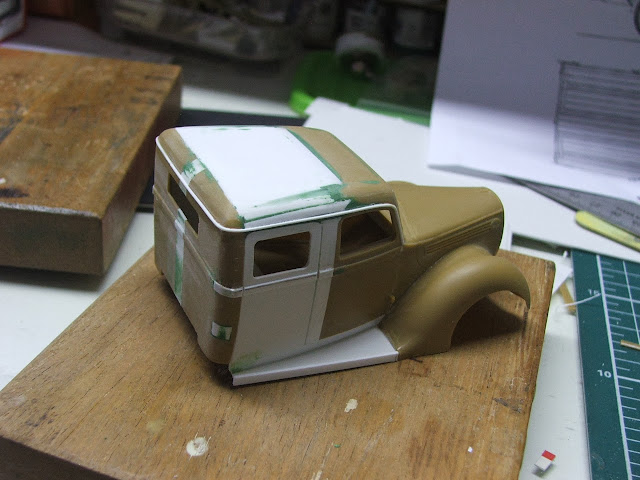 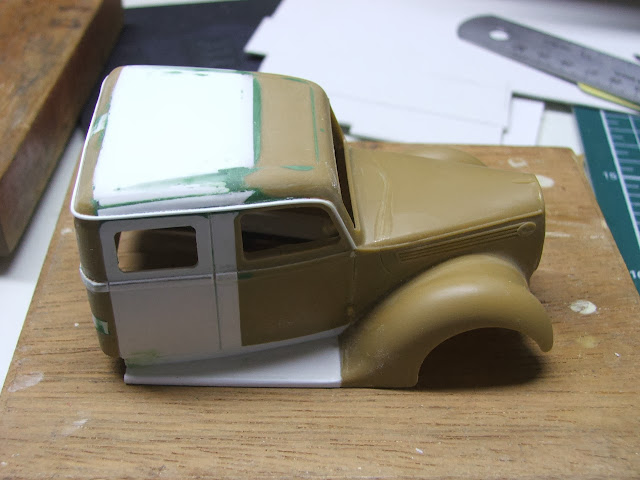 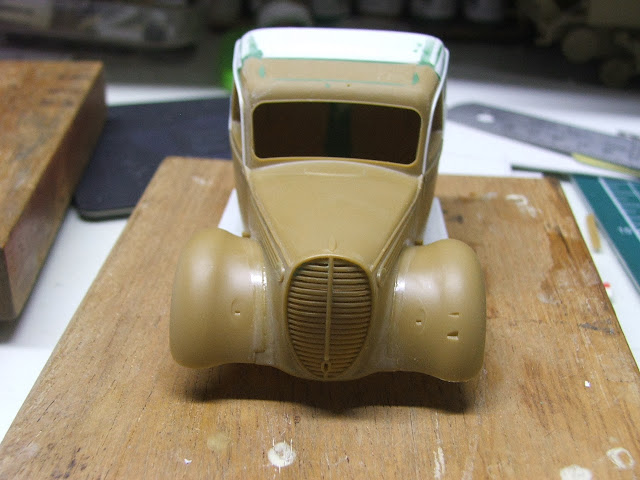 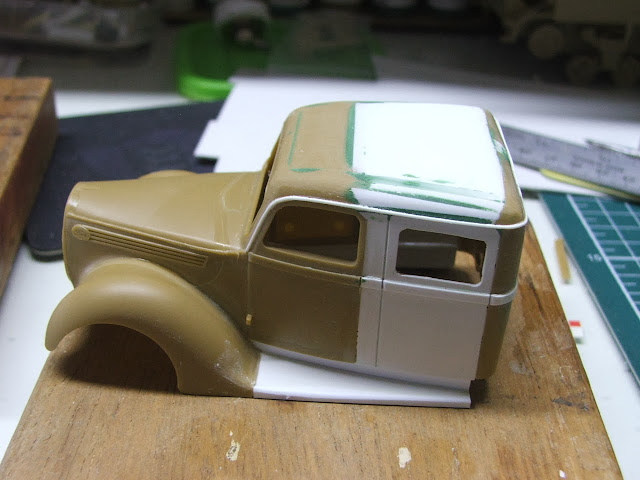 After the work in the cabin in plastic, my friend Fabio cast one cabin in resin to me:

As I say before, I'll do something similar to the photo. The roof rack will make with a larger area 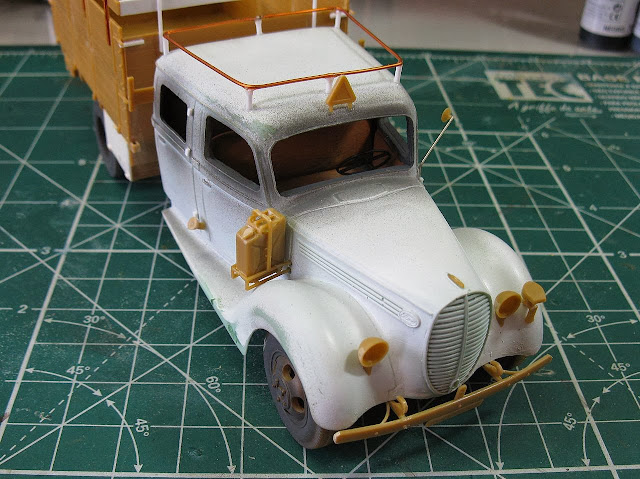 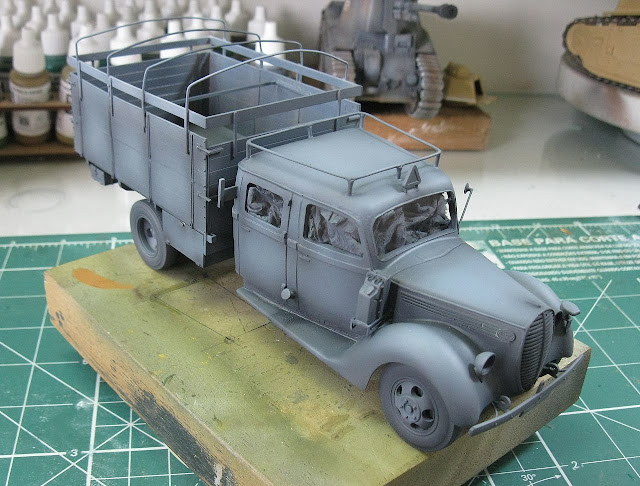 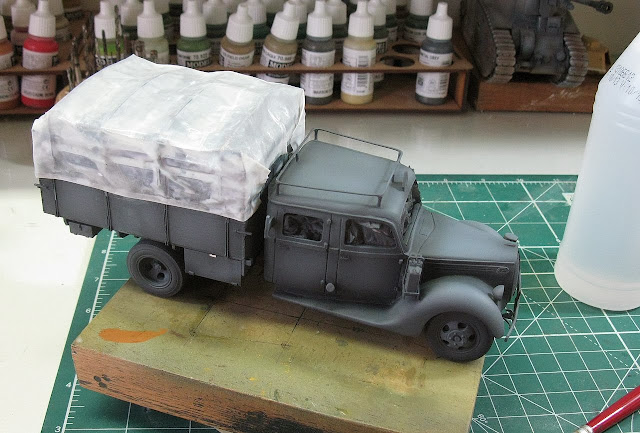 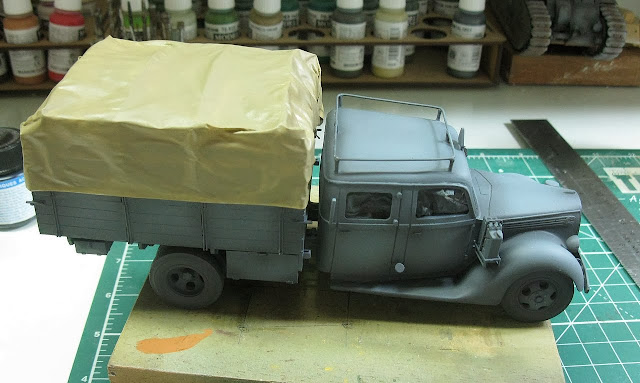 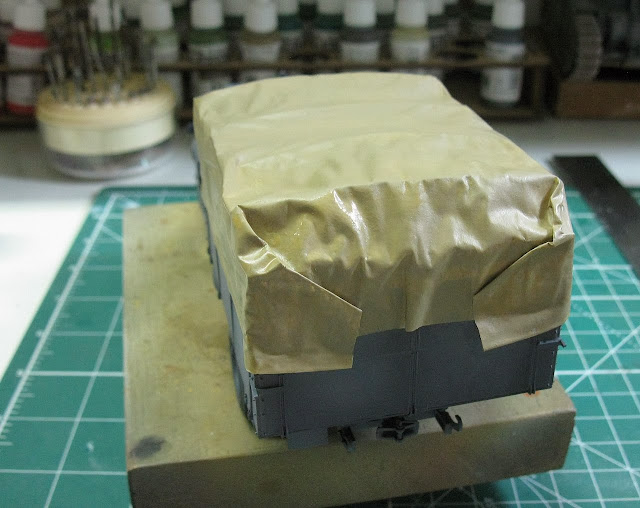 In Missing-Lynx, Javier de Luelmo suggests that the truck would be of Norwegian origin...and I agree with his opinion. About the long footboard linking the front fender to the rear, I opted to not do. This footboard was strange and illogical .... As my vehicle is not a reproduction and apparently, there was no standardization in these bodies (see the topic ML), my truck got this way ...
Thanks to all colleagues who participated in the discussion, especially Romsits Adam and Javier de Luelmo.
My truck will be from Sanitary Company, operating in the transport of medical supplies and drugs. Belonged to 163rd Infantry Division, 2nd Sanitary Company, in Norway, April -1941. The badge of 163rd ID is the "Trabender Elch" (Moose troting):
The decals, after printed by my Laserjet Color... 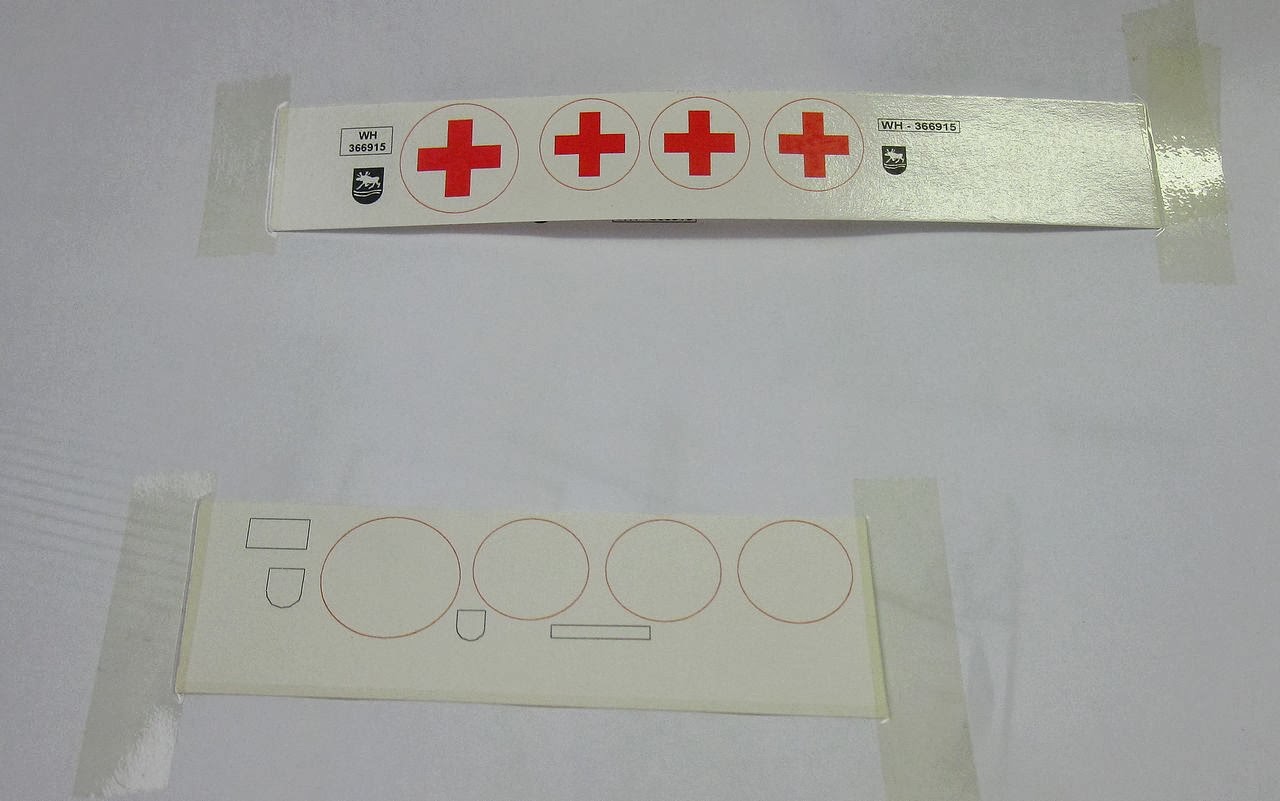 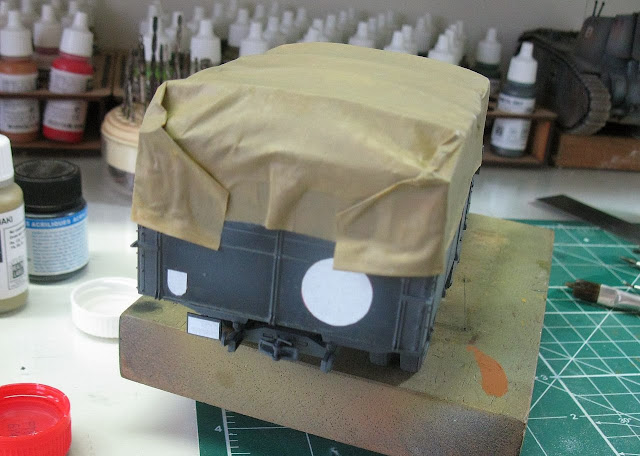 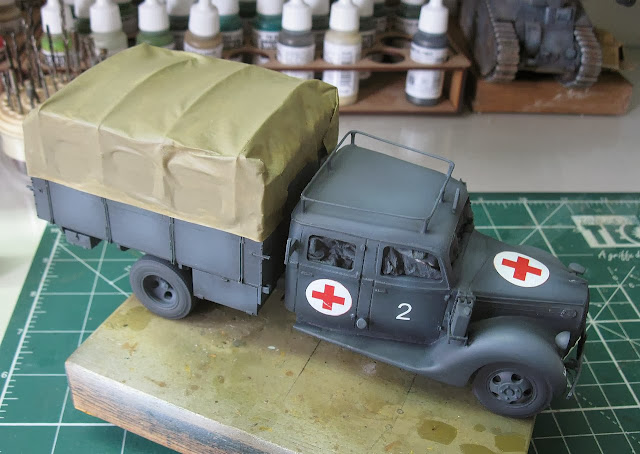 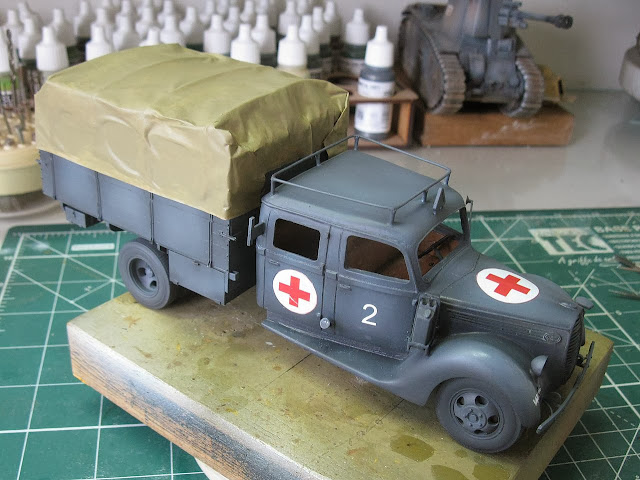 Good morning...In my last post about this truck, Claus Nielsen ask to me: " How do you fit glass in the windows after painting?"
Well, Claus...Typically, I use overhead transparencies for presentations. It is a very thin acetate ... I cut with scissors (very carefully) and set with PVA glue. In this particular case, I used the transparency of the kit. I refining the outline of acrylic with a scalpel (scraping), decreasing its outskirts ... When it fits perfectly, I glue the windshield with PVA glue. See the steps:
Oops..I forgot the load on the cab roof: made ​​with styrofoam.

Really I did not like the load on the top roof of the cabin. I will replace the styrofoam by Value Gear accessories.

The Ford G917 double cab was done !!! Another oddball for my collection: 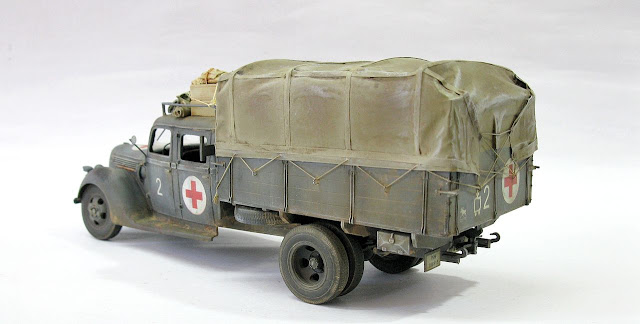 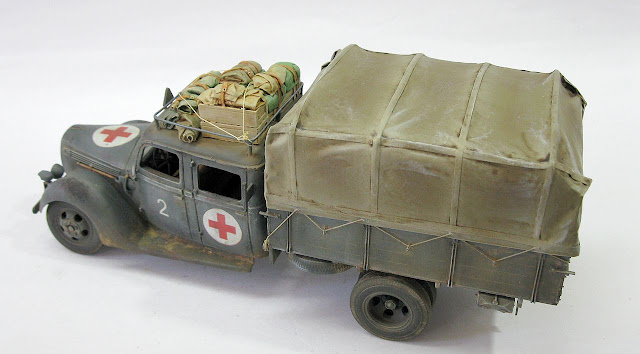 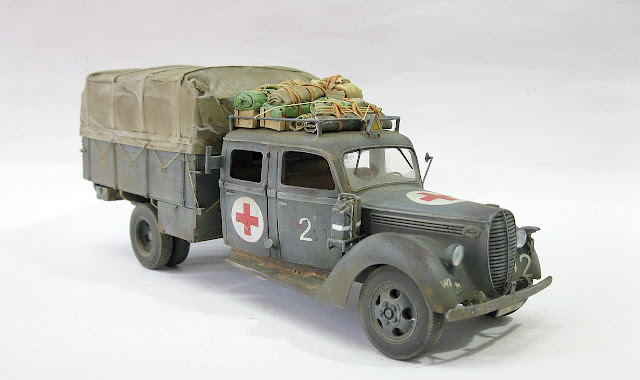 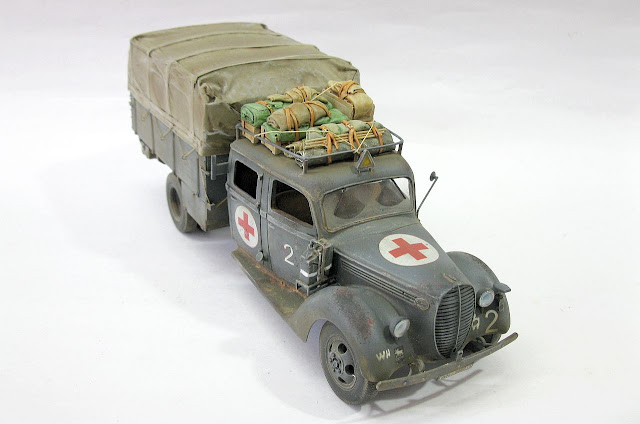