I decided to show this case because I did an up-grade in the kit to use it towing a Panzernest bunker, which builds on the M31 project. Although the illustration below shows an Opel 1.5 tonne, the vehicles were very similar. In addition, the image inspired me to make better use of my small 1 ton truck.
I repainted the kit and made new markings to fit the model in the new historical moment. But let's see the Opel's saga:

In 1930s, during the rearmament of Germany, several factories were called to supply the German Army with military vehicles. When refitting, the German Army no longer possessed the old equipment and weapons, because of the restrictions of the Versailles Treaty. The lessons learned in the fields of Europe during WW I and the absence of old material allowed a total reconstruction in quantity, quality and philosophy, and the seeds of rapid mobility and displacement of a modern war were planted in this period.
At the end of the 20s, the firm Adam Opel AG, based in Rüsselsheim, Germany, was acquired by GM, starting to produce vehicles derived from this automaker.
Opel has made its debut in the truck market in 1931, with the Opel Schnell-Leichtlastwagen (fast light truck). This initial version had a carrying capacity of 2 tons.
In 1935, Opel opened in Brandeburg the then most modern vehicle plant in the world and released a compact truck model in the market, with 1 ton load capacity, adapted to the characteristics and the needs of Germany.
The new vehicle received the name Blitz (lightning) after a public call for great success, when were sent almost 1.5 million proposals of names.. This small truck was called Opel Blitz 1 tonner Leichtlastwagen. She had an engine Olympia with 4 cylinders (gasoline) in line, 1300 cc and 24 HP of power, with side valves. The cabin was spacious and well sized.
The name Blitz (lightning) has great importance for Opel because the Blitz connected the name with the jingoism to the Count Zeppelin (great pride to the Germans at the time), generated a change in the Opel's logo. The new symbol remembered a lightning and at the same time, the Z of Zeppelin:
This tribute to Count Zeppelin would be repeated later in the hood ornaments of the largest capacity versions of the Blitz line with 2 and 3 tons, which was the most widely used truck by Germany in WWII, becoming the standard German truck of the conflict. The hood symbols of these trucks was a stylized Zeppelin:

Versions 2 and 3 tons consolidated the Opel as leader of the German truck market, with more than 70,000 built until the end of its production in 1944. The Opel Blitz Schnellastwagen 1 tonner was produced until 1937, with several versions: cargo, ambulance, firefighter and van.
Although small, the Blitz 1 tonner was extremely robust for its size, because the chassis was very well sized and reinforced.  She served in all theaters of operation at the beginning of the war, being found in France, Poland and Russia. 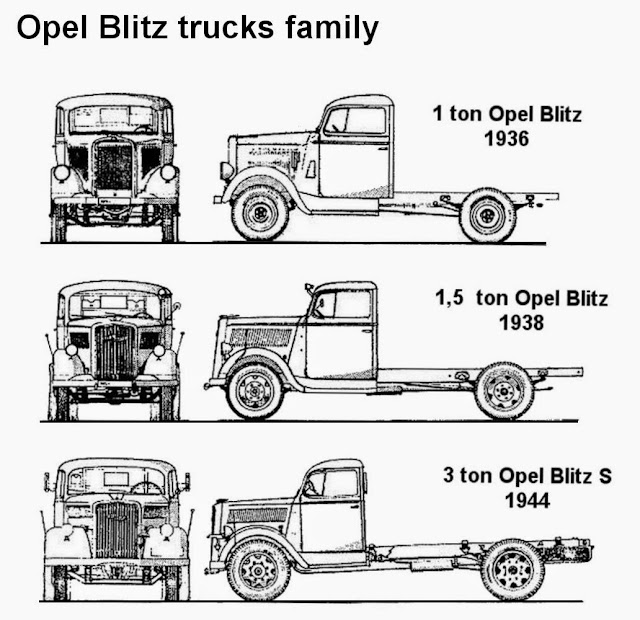 With the prolongation of the conflict and the entry into service of his older sisters, was being delegated to second-line services, but it was still seen at the end of WWII,
Specs: 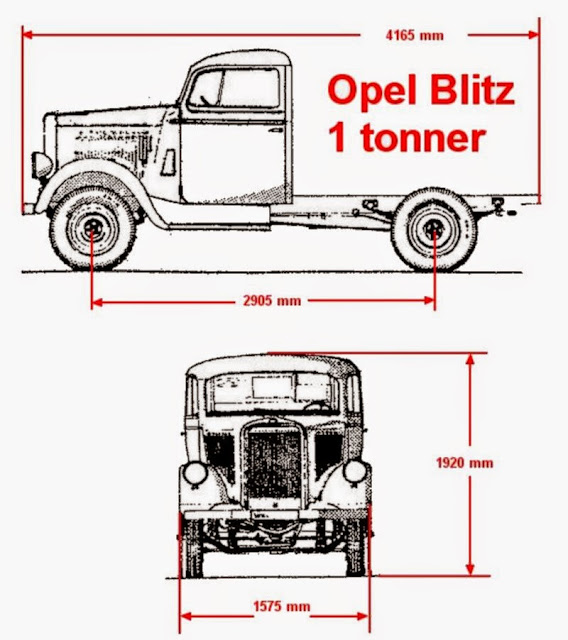 In Italy the Germans have been using a mobile steel pillbox, nicknamed the "Armored Crab," which made its first appearance on the Russian front in 1943. These prefabricated bunkers, without rotation, had an armored casting carapace armed with a machine gun.
These pills boxes were manufactured by various companies in subassemblies contracts being transported to local use by train, trucks or tractors. They were very simple but extremely effective equipment.

This pillbox was mounted in an inverted position on wagon-like wheels, and usually is hauled by tractor or lorry to a designated site, where it is overturned into a prepared cavity.: 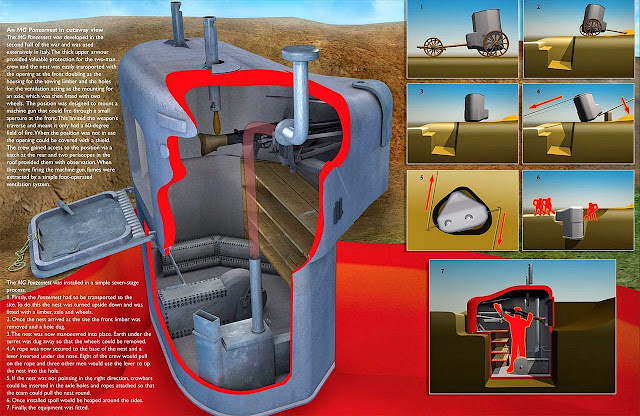 After this, the exposed upper half of the pillbox (which is non-rotating) is camouflaged with rocks, earth, or local vegetation.
Description:

In the front of the pillbox, there is a small embrasure for the machine gun, with an observation peephole above. When necessary, these openings are covered outside by a heavy metal shield, which can be moved either to the right or left of the embrasure by means of a lever inside the pillbox. On top of the pillbox are two collapsible periscopes, also regulated from the interior. The entrance to the pillbox is a small door in the rear; this is locked from the inside by means of two brackets.
These pillboxes are usually situated in the second defense zone. It takes 15 men to change one from traveling to fire position. When it's emplaced, the usual procedure is to dig a hole and sink the entire lower section and part of upper section. The panzernest does not rotate, so that only the machine gun aperture in front and the opening in the rear top with the two periscopes and pipe must be exposed.
The machine gun is mounted on a single bracket mounting which allows a free horizontal traverse on a semicircular grooved slide. The field of fire is 60 degrees. Elevation and depression, which are limited, are accomplished by a small handle to the left of the machine gun.
Forward of the machine-gun trigger, there is a leather cover to channel off the gases from the gun and also to receive spent cartridges. Attached to the cover is a metal tube. In turn, this tube is connected to a metal box fastened to the floor. The gases are expelled by a small fan situated beside the metal box. The fan is operated by two small foot pedals, one on each side of the pillbox. Each pedal may be worked independently. Air is expelled through a slit above, and to the right of, the door. Fresh air enters through a vent in the ceiling.
Two folding seats are provided for the crew. There are two iron rungs which serve as steps to facilitate entering and leaving. Two leather straps are hung from the ceiling, near the periscope openings. 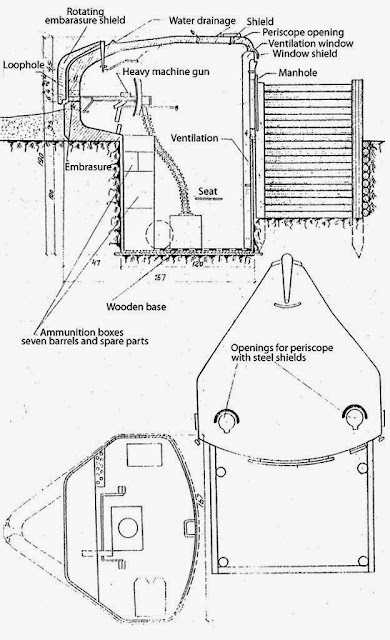 At the rear of the pillbox, and near the top, there are two holes into which steel bars may be inserted to lift the pillbox on and off its trailer. When these holes are not in use, they are closed by metal plugs.
Ammunition is stored on shelves below the machine gun, in the forward part of the pillbox. There are also two boxes for tools and spare parts for the gun. Space is provided for a field telephone. The pillbox accommodates two men, and was armed an M.G. 34 or 42.
Operation:
Under combat conditions the observer looks through one of the periscopes to observe and direct the gunner's ﬁre. The gunner observes through the forward slit. Protection from the front against riﬂe, grenade and artillery fire is by means of the iron slit cover which is manipulated to cover or open slit from the inside.
Inside the pillbox there is suﬁicient room for both members of the crew to sit comfortably and move around to a limited extent. There is a small heating stove and a ventilating apparatus, operated by a foot pedal, which provides suificient changes of air when all vents are closed. There is enough ammunition for 5 to 10 hours of ﬁre.
Methods of Combatting:
As only about one meter of this pill box shows above the ground, it is very difficult to detect. Thorough reconnaissance is imperative. It can best be detected by the outline of its embrasure, by its periscopes, ﬂue pipe, and flash and powder when firing. 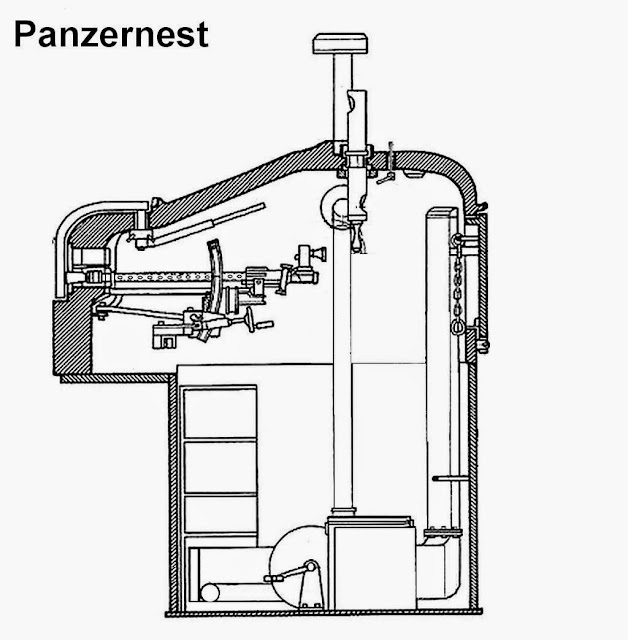 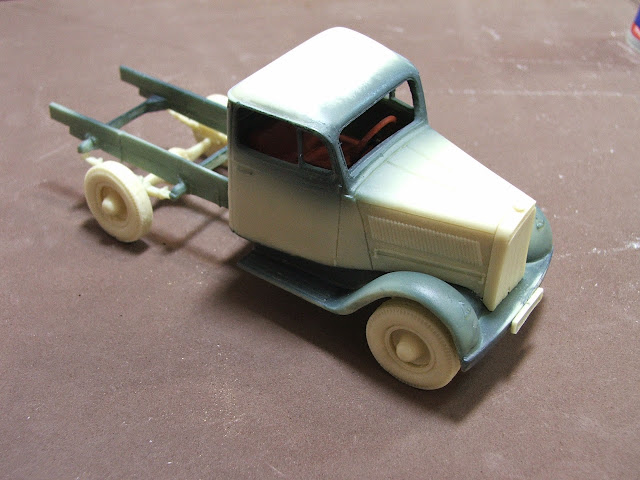 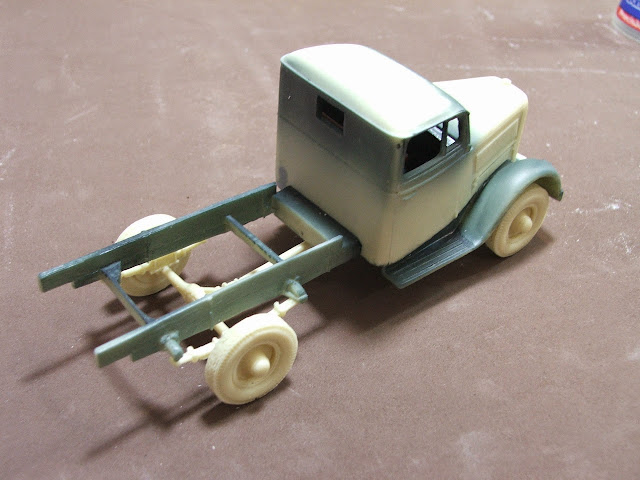 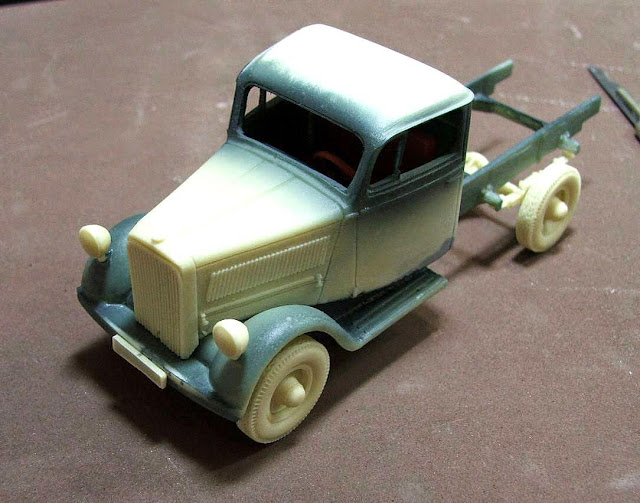 Now, it's time to build the Panzernest: The kit from RPM is nasty, awful, horrible !!! Burrs and defects simply unbelievable! (pic from M31 project)

After lots of work, this is the results: Panzernest in transportation mode: 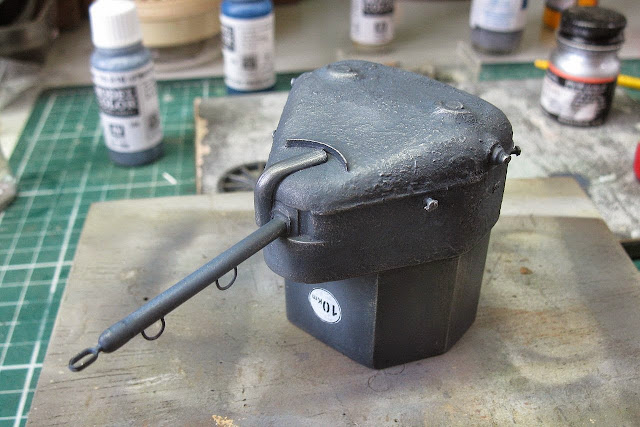 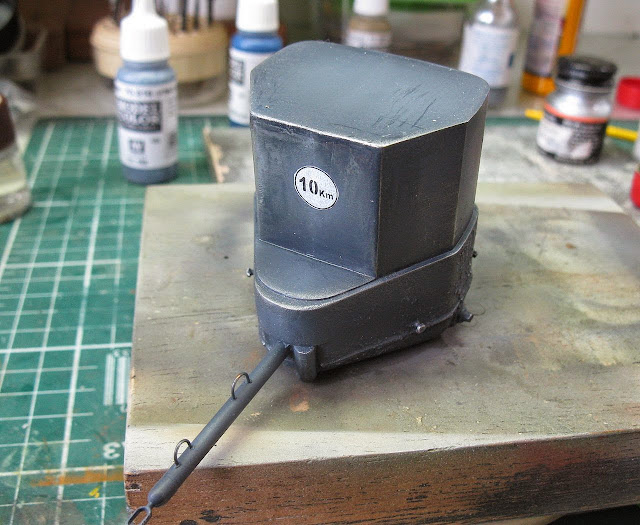 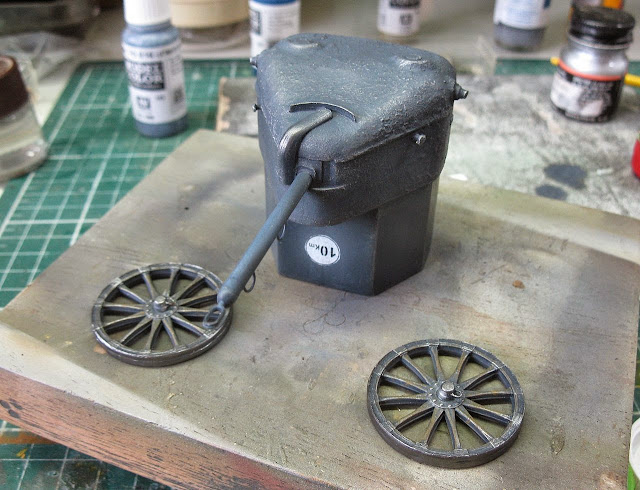 As usual, I made a profile to guidance in the markings: 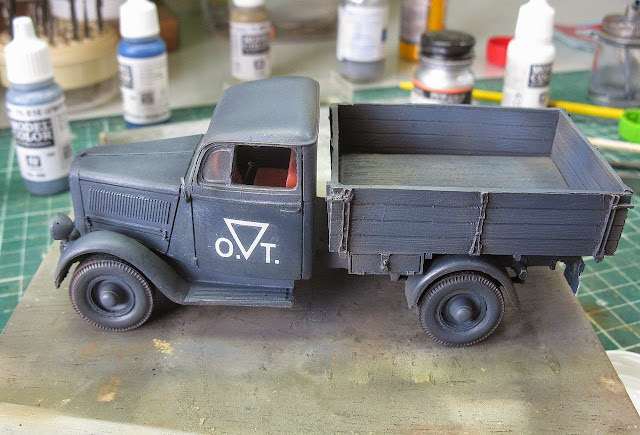 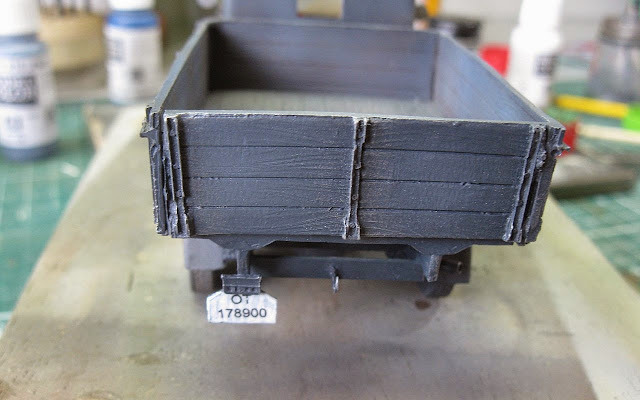 And the final pics: 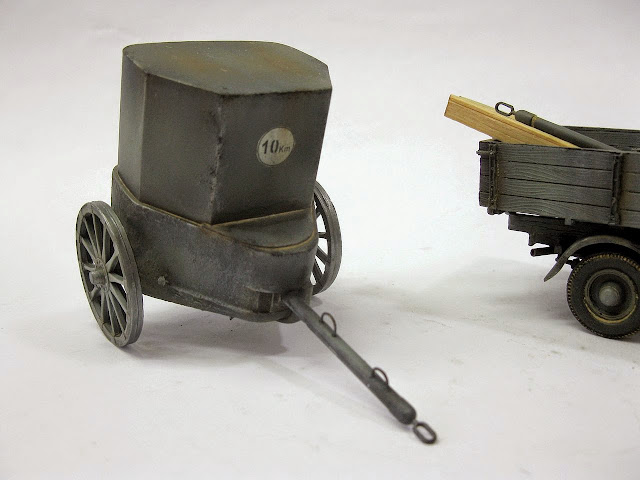 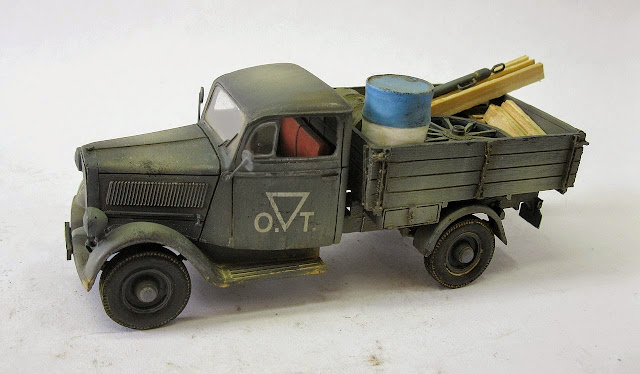 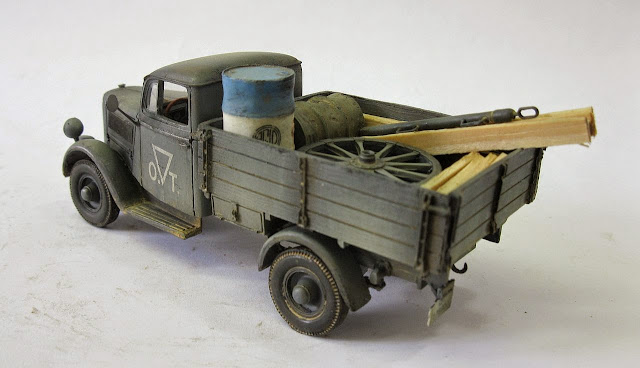 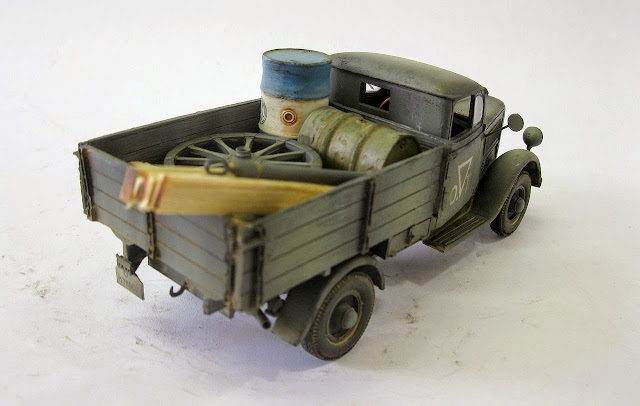 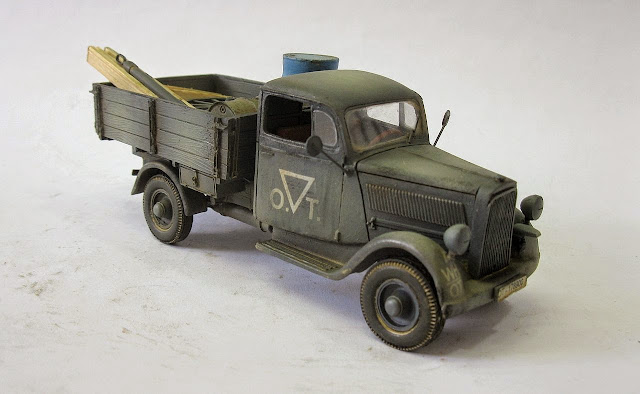 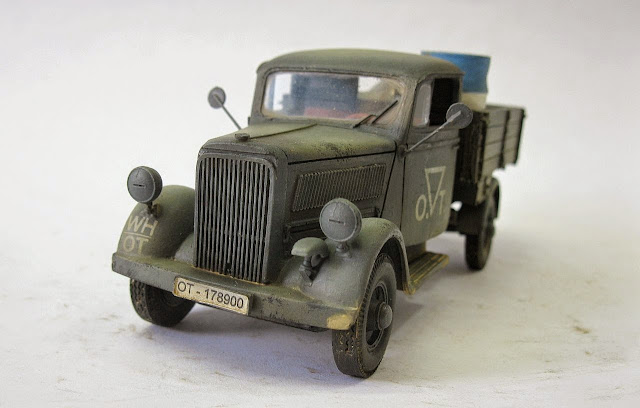 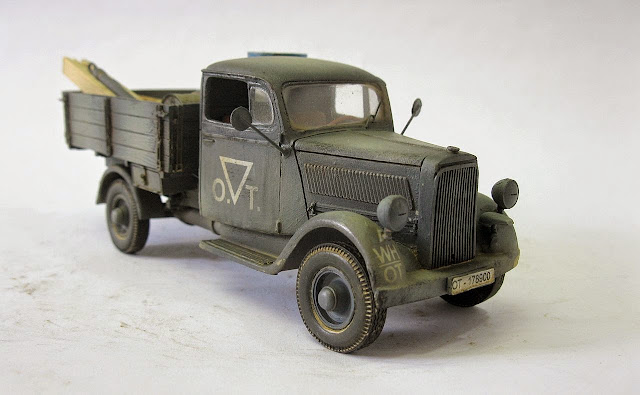 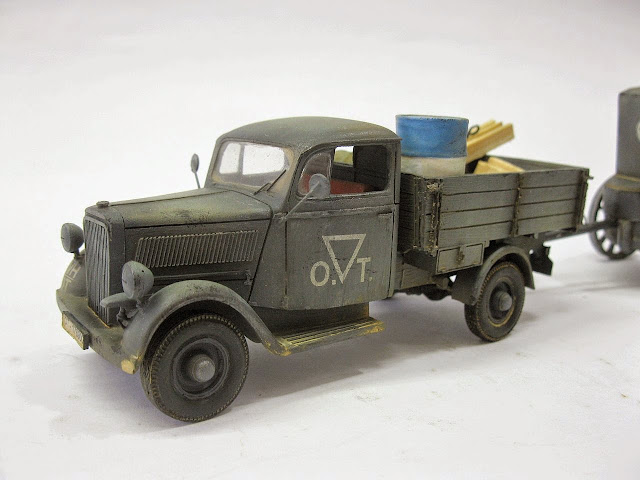 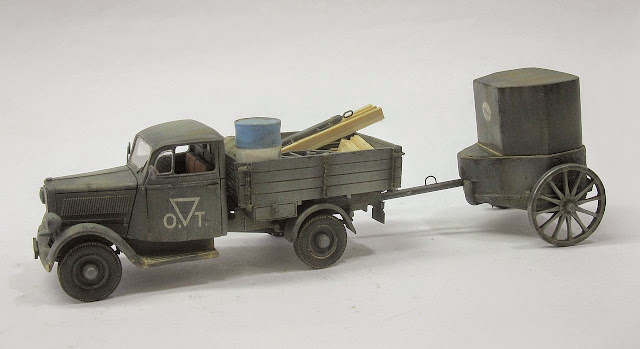