German Zugfahrer!!!
Now, let's talk about a huge girl, used for traction of German railroad trains, during WWII. It's time for the elegant Kriegslokomotive Baureihe 52. 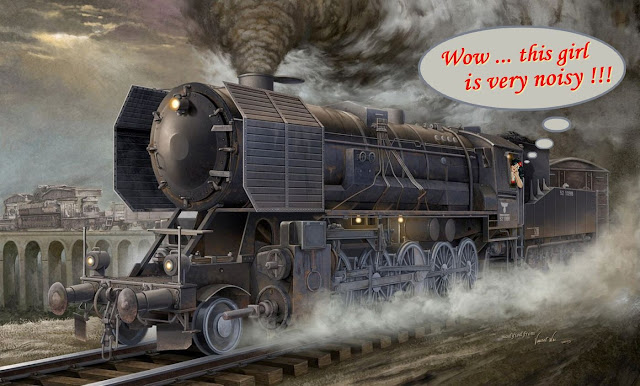 History:
The Deutsche Reichsbahn's Class 52 is a German steam locomotive built in large numbers during the Second World War. It was the most produced type of the so-called Kriegslokomotiven or Kriegsloks (war locomotives). The Class 52 was a wartime development of the pre-war DRG Class 50, using fewer parts and less expensive materials to speed the mass production.
They were designed by Richard Wagner who was Chief Engineer of the Central Design Office at the Locomotive Standards Bureau of the DRG.
About a dozen classes of locomotive were referred to as Kriegslokomotiven, however the three main classes were the Class 52, 50 and 42.
Many locomotives passed into Russian ownership after the Second World War. In the U.S.S.R. the class were designated TE 5200 (TЭ 5200). Other operators of the type included Poland and Romania, Bulgaria, Norway and Turkey. In Yugoslavia locomotives of the type were classified JŽ 33.
Over 6,700 locomotives of DRB Class 52 type were built across Europe for use on the Eastern Front during the Second World War. Thus it was one of the most numerous steam locomotives in the world. To achieve such numbers, the German locomotive manufacturers were merged into the Gemeinschaft Grossdeutscher Lokomotivhersteller (GGL), which was a subdivision of the Hauptausschuss Schienenfahrzeuge (HAS) founded in 1942.
Key HAS figures were the Reichsminister for munition and armament, Albert Speer and the Reich transport minister, Julius Dorpmüller.
The GGL included the following locomotive manufacturers (including an approximate number of Class 52s produced):

Engine design:
The class (Baureihe) 52 was a simplified version of the prewar Reichsbahn class 50 locomotive (produced 1938-1942). The simplified design of the class 52 was intended to reduce the man-hours and skills needed to manufacture it and to adapt to wartime shortages of strategic materials. Additional design changes gave the locomotives and their crew better protection against the cold.

Between 1942 and the end of the war in May 1945 over 6,300 class 52 locomotives were built. Additional locomotives were built post-war, giving a class total of probably 6719 units, delivered by seventeen manufacturers. The Class 42 was a larger version of the Class 52, but was produced in small numbers.
In the early postwar years class 52s were used by many European countries, the largest user being the Soviet Union, which had more than 2,100 of them, designated class TE 5200 (ТЭ). Poland had more than a thousand and East Germany had about 800.
The type was also widespread among other eastern European nations. Western European countries replaced them with more modern locomotives as soon as possible, with the exception of Austria where they were used until 1976.
The simplicity and effectiveness, plus the large production total, meant that many eastern European countries were slow to withdraw these Kriegslokomotiven. Poland used them into the early 1990s; Turkey and Bosnia were also late users of the type.

Wagner had wanted locomotives which were long-lasting and easy to maintain, and unlike British engineers did not consider a high power-to-weight ratio a priority. The resulting Kriegslokomotive had a low axleload of 15 tons and could haul 40 percent more freight than the old Prussian locomotives they replaced. The class 52 could haul 1,200 tons at 65 kph without significant strain.
Countries using the engine:
Following the invasion of Poland in September 1939 Nazi Germany disbanded the Polish State Railways (PKP). Polish rail officials were either executed in mass shootings or imprisoned, and some 8,000 managerial positions were staffed with German officials. Former Polish companies began producing German engines BR44, BR50 and BR86 as early as 1940, some using forced labor.
By 1944, the factories in Poznań and Chrzanów were producing the redesigned Kriegslok BR52 locomotives for the Eastern Front. These locomotives were made almost entirely of steel; the use of more expensive, non-ferrous metals was dropped in view of the engines' expected lifespan. After the war, some 1,200 class 52s remained in reconstituted Poland. Another 200 were acquired from the Soviet Union in 1962-64. The class 52, designated Ty2, began to be phased out in the 1980s; its last regular use was in 1999.
Some 100 were built for Romanian State Railways, becoming class 150.1000 engines. Over 150 were in use by the Bulgarian State Railways as class 15. Turkish Republic Railways built 10 for forming the TCDD 56501 Class. Turkish Railways acquired 43 additional loc's at the end of the war, these had previously been on hire.
The Deutsche Reichsbahn (DR) in East Germany had 200 machines reconstructed to the new DR Class 52.80.
74 locomotives were sent to occupied Norway during World War II and were confiscated following the war. The Norwegian classification was class 63, and was nicknamed Stortysker ("big German"). One engine, restored by the Norwegian Railway Club, is preserved at the Norwegian Railway Museum in Hamar.
The ČSD Czechoslovak state railways used hundreds of 52s post-war, some left behind by the Germans after 1945, some being rebuilt by the Škoda Works in Plzeň. They bore designation class ČSD 555; several dozen were subsequently adapted, as the 555.3, to burn mazut fuel oil, a large surplus of which was generated in synthetic fuel plants in occupied Czechoslovakia from brown coal. The 555.3 differed visibly by having a lid on the smokestack to slow down cooling of the lining of the flue passage, to prevent cracking.

The Hungarian State Railways (MÁV) acquired 100 type 52s from the Soviet Union in 1963. They were designated class 520 and used into the 1980s. Others were used by Yugoslavia before that country's dissolution in the 1990s. A few were still in industrial service in Bosnia in late 2017.

The kit:
I built this kit 12 years ago (2007) , when Trumpeter release this big girl in the market (2005). The kit was amazing, big and challenger.
In those grim and dark times, the historical references were not as accessible as today and the kit was released with some historical flaws, the main being the tender wagon, which was of a type after the period approached by the model. But overall, the kit was (and still is ...) very impressive.
The pics of the building are few and bad, but I put them as references of my old times of modeling. I'm really sorry that I did not have the photos of the first stages of the building, but here are the photos I have:
I decided not to do the black and red painting suggested by Trumpeter ... Just plain ugly .... I decided to do something more "operational" ... 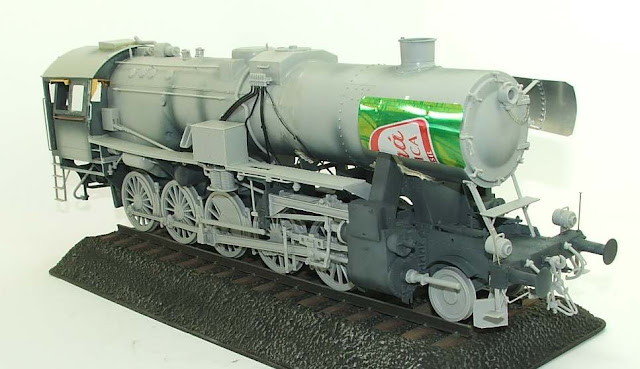 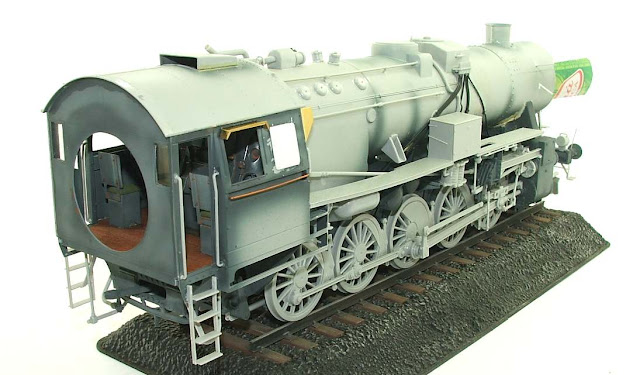 Well ... At that time, there was a fever of installing a 20mm quadruple Flakvierling 38 on the rear platform of the tender.

And let's face it: in that place it really was a great place to increase the chances of surviving this magnificent target ... Let's make a support to the "cradle" of the Flakvierling 38 Pom-Pom ......


And speaking of coal, Trumpeter's solution was horrible: uniform, flat, ungrateful little pieces of coal injected into the plastic ...
Ugh !! Awful!!
I decided to add carbon in nuggets, used in aquariums, for water filters. I will use PVA glue diluted in water for gluing ... 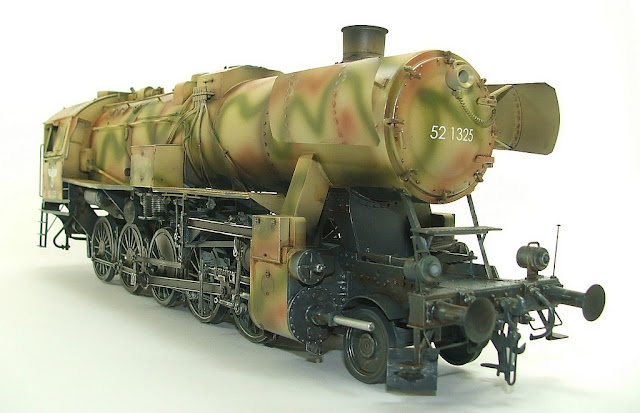 In desperation, I decided to mitigate the painting with a winter cammo...


And after that, a few years have passed. I changed residence, leaving a big house with plenty of room for a tighter apartment. The Kriegslokomotive project stood like a real "Shelf Queen", forgotten and unfinished in the back of my showcase.
Until a colleague decided to buy the girl, as long as I finished it ... And that's how I did the final weathering.
Detail: I found in the same showcase an old, forgotten and very poorly painted Artilleriewagen s.Sp. (schwerer Schienenpanzerspähzug) (heavy armored scout train), from Revell, which I bought built and painted in an auction many years ago. Same German track gauge ... Who knows how to make a good composition ?? But first, we have to repaint this little "casamate" girl ...

And finally the train composition is ready!! Here is the Kriegslokomotive Baureihe 52 (and Schwerer Spähzug Artilleriewagen s.Sp.), who are now going to their final station, towards the south of Brazil. Bon voyage, mates !!! Let the Typhoons, Mustangs and Tunderbolts not find you on the way !!! Full steam ahead!!! 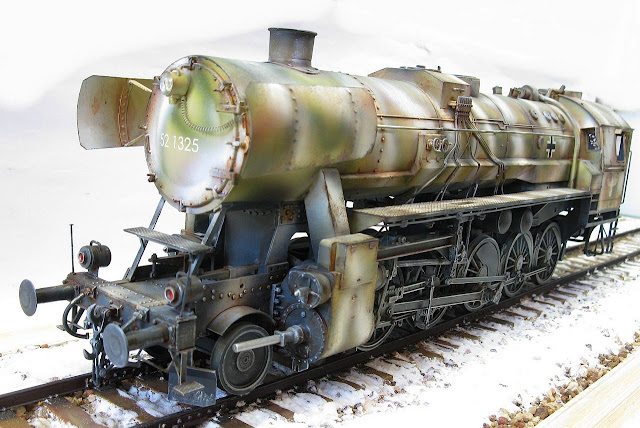 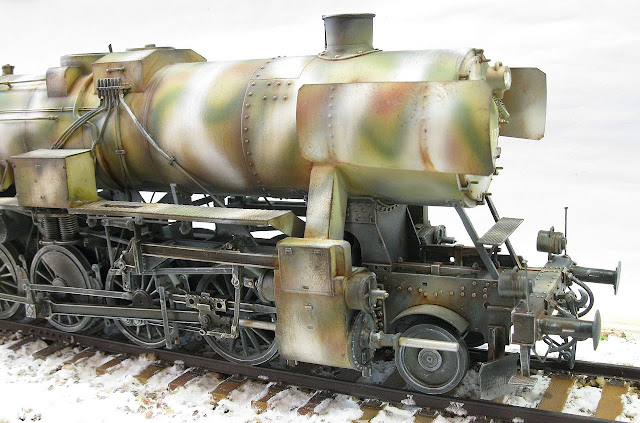 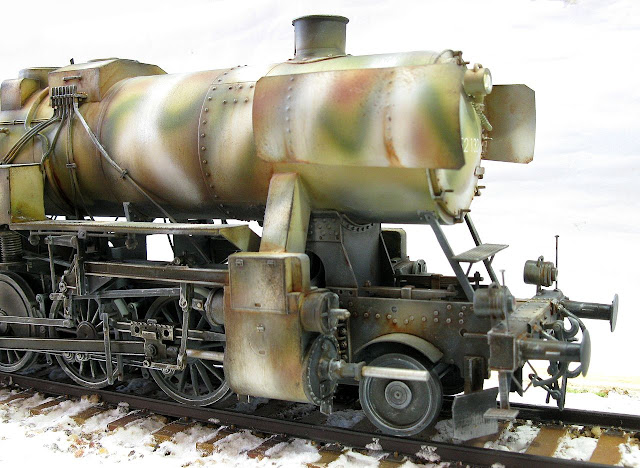 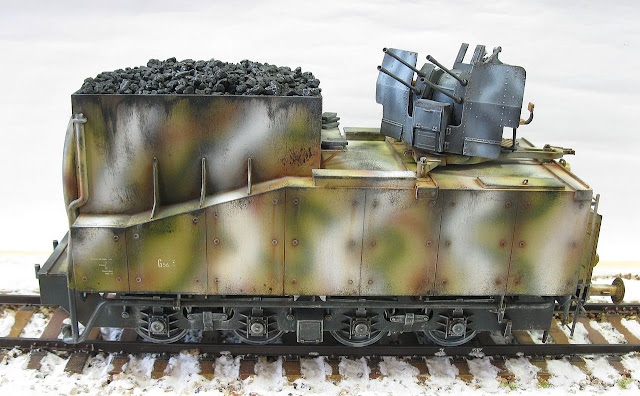 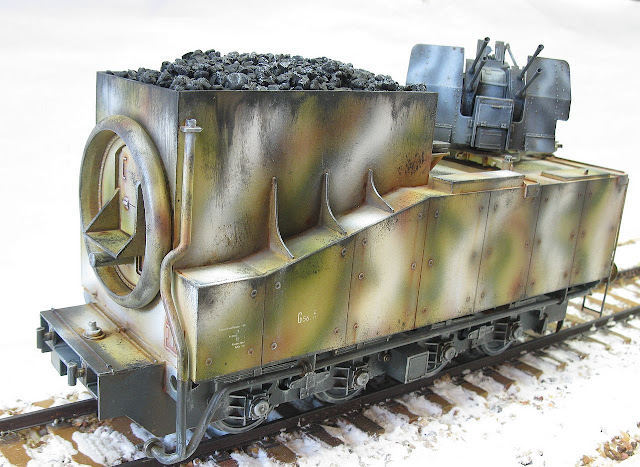 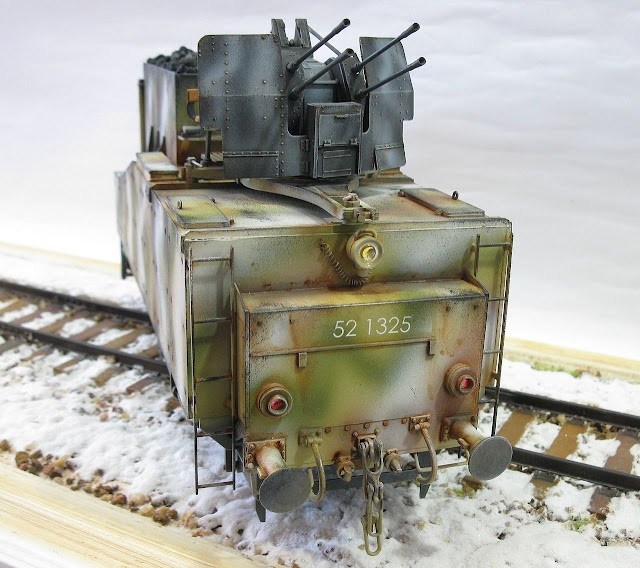 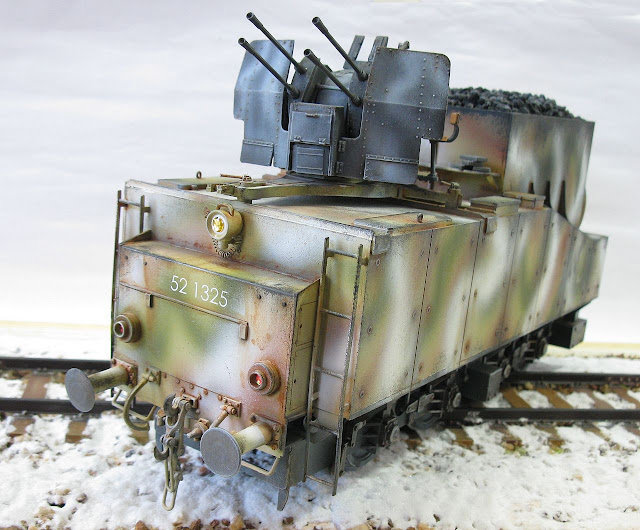 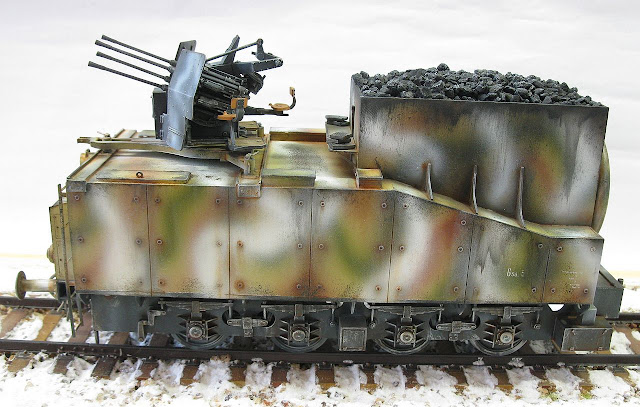 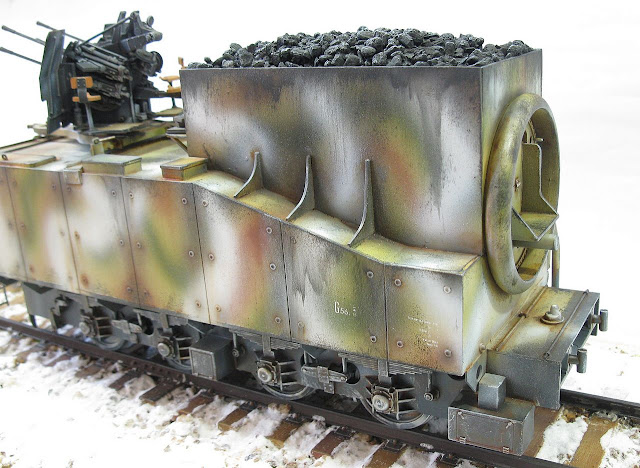 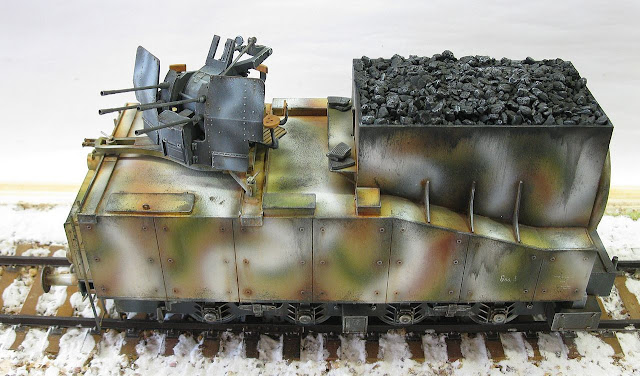 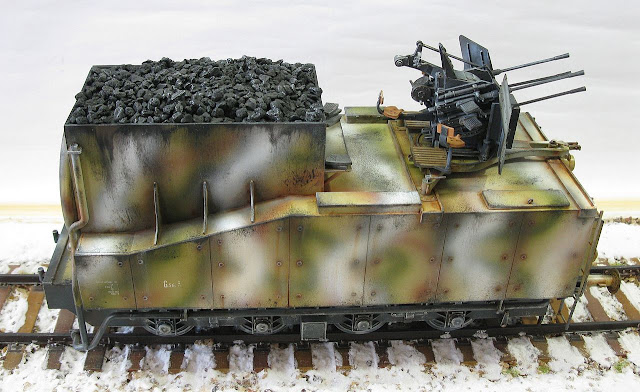