Tankers!!
Let's revisit this formidable machine, one of the most powerful and robust tractors of the WWII ... Yeah.. we are talking about the FAMO - Schwerer Zugkraftwagen 18t - Sd.Kfz.9 in the version of tank transporter, towing the heavy trailer Sd.Ah.116. Let's go on this mission together !!!

The Sd.Kfz. 9 (also known as "Famo" ) was a German half-track that saw widespread use in WWII, and the heaviest half-track vehicle of any type built in quantity in Nazi Germany during the war years. Its main roles were as a prime mover for very heavy towed artillery and as a tank recovery vehicle. Approximately 2,500 were produced between 1938 and 1945.

History:
At the end of the 19th century, more precisely in 1890, an American company based in California, the Stockton Wheel Company (later, Holt Manufacturing Company, later Catterpillar Inc.) released a strange agricultural vehicle, with tracks replaced the rear wheels for better traction, but maintaining the front wheels for  easier handling: the Stockton steam driven crawler tractor - 1890.

This tractor can be considered the predecessor of the entire world military halftracked vehicles.

The American Armed Forces saw the potential of using this vehicle as an artillery tractor and off-road transporter, being immediately converted to military use as a Holt heavy artillery tractor.
Meanwhile, in Germany, the same idea also started to develop, but it really only got a boost at the beginning of the First World War. The military concept for these vehicles was that even on the most difficult terrain, these tractors should be able to move around and pull loads or artillery pieces safely. But engine technology at that time was just in its infancy and the big problem with these machines was poor reliability. Even with the stimulation of conflict worsening, no mature solution has emerged. The prototypes and test series manufactured until the end of the war were completely discarded in 1919. Despite this disappointing result, the WWI brought innovation to motor vehicles as a military vehicle.
From 1930 onwards, we can say that work on the development of half-track tractors has started more seriously in Germany. The Krauss-Maffei company received a request from the Army Weapons Department to develop a tractor.equipped with a retractable rear track drive.
The first drawings generated the tractor ZW 10,also equipped with a retractable rear drive and his successor, the MSZ 201, appeared in 1931.

The Weapons testing agency conducted tests on a test bench created especially for this purpose. The goal was to develop a new type of traction and steering system that was a combination of conventional steering and halftrack traction.
Preliminary design of all the German half-tracks of the early part of the war was done by Dipl.Ing. Heinrich Ernst Kniepkamp of the Military Automotive Department (Wa Prüf 6) before the Nazis took power in 1933.
His designs were then turned over to commercial firms for development and testing. Fahrzeug- und Motorenbau GmbH (FAMO) of Breslau received the contract for the 18t (18 long tons; 20 short tons) heavy towing tracked vehicle. Their first prototype, the FM gr 1, was completed in 1936. It had a 200 horsepower (200 PS) Maybach HL98 TUK engine and was only 7.7 metres long. The F 2 prototype appeared in 1938, but differed only in detail from its predecessor.
The F 3 appeared in 1939 and was the production version. The design was simplified over the course of the war to reduce costs and the use of strategic metals. Some vehicles produced by Tatra had its 12-cylinder, air-cooled Type 103 diesel engine fitted. Large spades were added at the rear of the chassis during the war to improve the vehicle's ability to recover tanks and other heavy vehicles.

Description:
The Sd.Kfz. 9 had a ladder frame chassis. Power was provided by a Maybach 12-cylinder, water-cooled, 10.838 litres HL 108 gasoline engine of 270 horsepower (270 PS). It had a syncromesh ZF G 65 VL 230 transmission with four forward and one reverse gears. It had two fuel tanks, one of 90 litres and the other of 230 litres capacity.

Both tracks and wheels were used for steering. The steering system was set up so that shallow turns used only the wheels, but brakes would be applied to the tracks the further the steering wheel was turned. The drive sprocket, like all German halftracks, had rollers rather than the more common teeth. The rear suspension consisted of six double sets of overlapping, interleaved Schachtellaufwerk layout roadwheels mounted on swing arms sprung by torsion bars. An idler wheel, mounted at the rear of the vehicle, was used to control track tension. The front wheels had leaf springs and shock absorbers.

The upper body had a crew compartment common to all versions. This had bench seats, one for the driver and his assistant, and another for the crew. The rear portion of the upper body was adapted for the vehicle's intended role. The windshield could fold forward and was also removable. A convertible canvas top was mounted at the upper part of the rear body. It fastened to the windshield when erected.
The Sd.Kfz. 9 was designed to have a towing capacity of 28 tonnes (28 long tons; 31 short tons). This was adequate for medium tanks like the Panzer IV, but two or even three or four were necessary for heavier vehicles like the Tiger I, Panther or King Tiger. It towed Sd.Anh 116 low-loader trailers to carry disabled vehicles. All were equipped with a winch, mounted at the middle of the vehicle, just under the cargo platform.

The Famo's upper body had a crew compartment common to all versions. This had bench seats, one for the driver and his assistant, and another for the crew. The rear portion of the upper body was adapted for the vehicle's intended role.

This version could also carry a earth spade in the rear, to "anchor" the tractor to the ground, for it to pull heavy loads with its winch installed in the middle of the chassis. 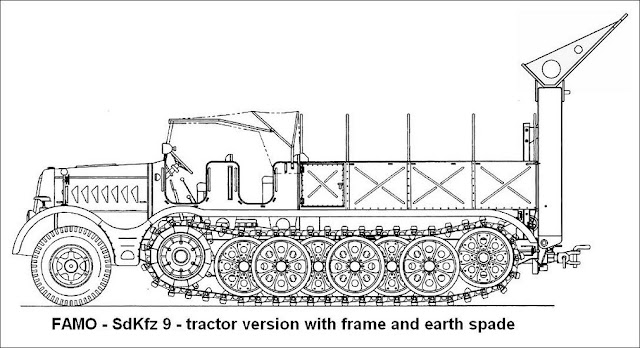 The frame and spade at the rear of the vehicle serve as an anchor when winching heavy loads.(special hollow steel chock blocks are also supplied to beused at the rear of the tracks). The hinged frame is rectangular in sharpe and consists of three pieces of channel-section steel, two longitudinal and one or two transverse, reinforced by triangular plates. The open end of the frame is hinged to reinforced ends of the chassis frame. The spade is attached to the free end of the frame by two removeable pins.

The frame is raised and lowered with the winch by running the winch cable over a pulley mounted on a vertical framework at the rear of the body. A hook to engage the eye of the cable is attached to the free end of the frame. To recover a vehicle, the frame is dropped with the winch and the spade is attached to it. The winch cable is then unhooked from the frame, removed from the upper pulley, and extended to the rear for coupling to the vehicle to be recovered. The winch is located under the body and is controlled at the rear of the vehicle. It has a hand operated brake with an extension bar and handle.


But the champion of versatility was undoubtedly the trailer Sd.Ah. 116, which carried everything and anything when attached to the Sd.Kfz9 18t. Here are some examples, in addition to the tanks ...

A larger, gasoline-electric, 10ton Demag crane was fitted on the later Sd.Kfz. 9/2, but this required outriggers to stabilize the vehicle before operations could begin.

A larger, gasoline-electric, 10 t (9.8 long tons; 11 short tons) crane was fitted on the later Sd.Kfz. 9/2, but this required outriggers to stabilize the vehicle before operations could begin. 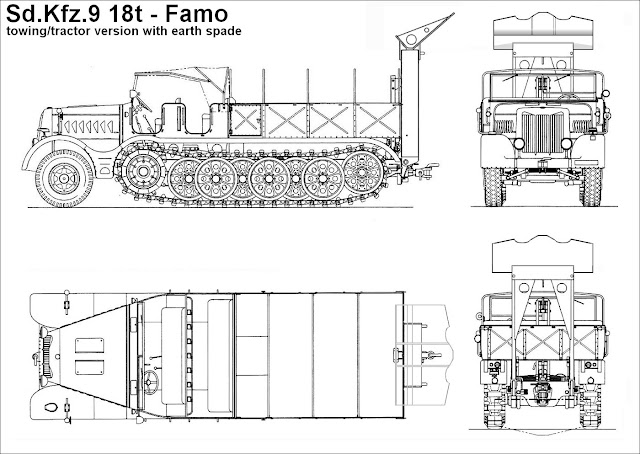 For this project I will use a wonderful kit, manufactured by Tamiya in 2000: the Schwerer Zugkraftwagen 18t "FAMO" und Tiefladeanhänger für P.Kpfw. Sd.Ah.116 (# 35246), in 1:35 scale.
Although it is a twenty-year-old kit, I can only classify it as fantastic, with the Tamiya standard of injection quality, detailing and ease of construction. And I will also use an accessory part also manufactured by the same Tamiya, the Tank Recovery Accessory Set for German 18 ton half-track (# 35243), which is nothing more than the earth spade for my Famo!
Imagine the bald one, satisfied and happy with life !!!
Starting now!!  By the book, as usual!! Gents, start your engiiiiines!!!


The building continues...torsion bars&arms&suspension... and front axle, too... But, in step 10 you need to step on the brake, as the wire rope guide subassembly composed of parts E-26,27 and 28 must not be installed, in the earth spade version. See below:
In this stage, you start adding the specific earth spade parts to the chassis ...