Hi, Fellas...
I choose to build this classic armoured car and this is my first experience with a Roden´s kit. As I often do, I´ll make a double construction: One of the cars will be OOTB, with colors of the Desert, at the beginning of the African Campaign. The other will be a "hurt" vehicle, last survivor in use, with field modifications.
History:

The Rolls-Royce armoured car was a British armoured car developed in 1914 and used in World War I and in the early part of World War II.
The Royal Naval Air Service (RNAS) raised the first British armoured car squadron during the First World War. In September 1914 all available Rolls Royce Silver Ghost chassis were requisitioned to form the basis for the new armoured car. The following month a special committee of the Admiralty Air Department, among whom was Flight Commander T.G. Hetherington, designed the superstructure which consisted of armoured bodywork and a single turret for a Vickers machine gun.
The first three vehicles were delivered on 3 December 1914, although by then the mobile period on the Western Front, where the primitive predecessors of the Rolls-Royce cars had served, had already come to an end. Later in the war they served on several fronts of the Middle Eastern theatre.
Chassis production was suspended in 1917 to enable Rolls-Royce to concentrate on aero engines.
The vehicle was modernized in 1920 and in 1924, resulting in the Rolls-Royce 1920 Pattern and Rolls-Royce 1924 Pattern.

In 1940, 34 vehicles which served in Egypt with the 11th Hussars regiment had the "old" turret replaced with an open-topped unit carrying a Boys anti-tank rifle, .303-inch Bren machine gun and smoke-grenade launchers.
Some vehicles in Egypt received new chassis from a Fordson truck and became known as Fordson Armoured Cars. Pictures show them as equipped with what appears to be turrets fitted with a Boys ATR, a machine gun and twin light machine guns for anti-aircraft defence.
At the outbreak of World War II, 76 vehicles were in service. They were used in operations in the Western Desert, in Iraq, and in Syria. By the end of 1941, they were withdrawn from the frontline service as modern armoured car designs became available. Some Indian Pattern cars saw use in the Indian subcontinent and Burma.(font: Wikipedia) 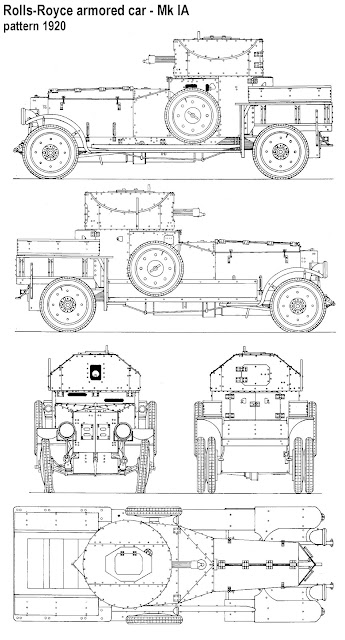 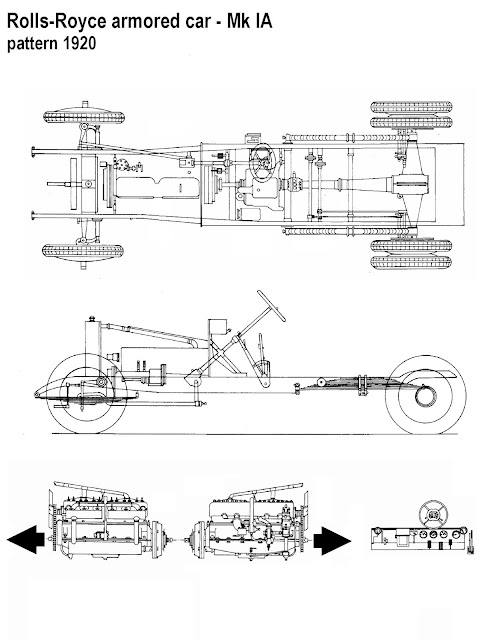 The Kit:
The kit comes in a box card (with a weird box art...), packed in one plastic bag with a decal sheet,  a printed sheet of acetate, and a small instruction manual. 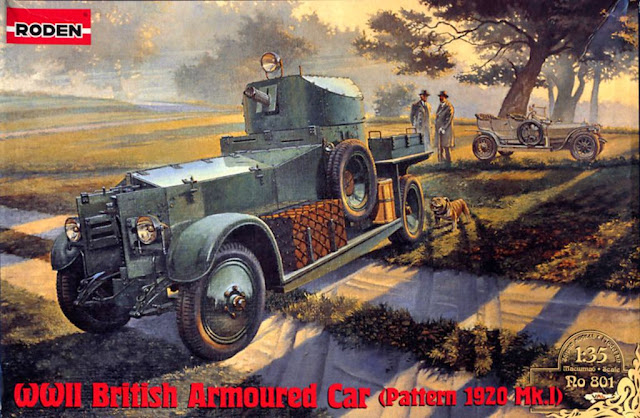 The plastic is dark green and the injection is not the best, with many burrs and excesses to be corrected ...The thing promises!

I started assembling the beasts yesterday, enjoying the last hours of my vacation ...The open boxes; Look in the right box, the resin conversion kit that I´ll use for one of Rolls.
I will build one of the cars like in use in the African campaign, in its early stages. And the other, all worn, with modifications in the field. For this "modified" car, the idea is build the last car of the Regiment that fell into the hands of a soldier-mechanic. Lost by lost, he put his hand to the work and adapted the wheels of the LRDG Chevy, with dune-buggy type tires (more suited to the desert) in the British car. I'll do it all "injuried", with parts missing, like a Frankenstein built with parts cannibalized from the deposit of scrap.
The engines parts ( by the book...).
Here begins the nightmare... Many parts of Roden´s kit present  burrs and what is worse, excessive material in the pins and holes of the parts. If you join the pieces, the excesses in these regions touch each other, preventing the perfect union of parts. You have to cut the pin and flatten the surface of the holes and the pins (cutted) , because they all exhibit a shoulder at its base ...
See in the pic below, the fuel tanks - Notice the bumps at the base of the pins and holes (blue arrow). On the right, the cut pieces (red arrow) and the flattening of plastic.
This makes the strongest cry ...
Boooo, Roden, Booo!!! 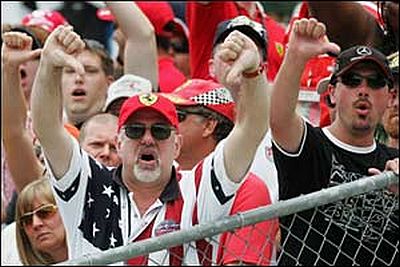 But enough complaining ... Building the chassis. The stringers came warped, but I managed to align ...
The engines and the chassis:
I built the "standard" whells and clean the resin wheels, for "Frankenstein" version:

The work continues ... I built the wheels to check and correct the alignment of the two chassis. Not is the best choice for painting, but prevents "twisted" vehicles...
It's a shame that the engines will be hidden ...but armored cars with engines exposed are a contradiction. More pics, of individual cars; The standard first: 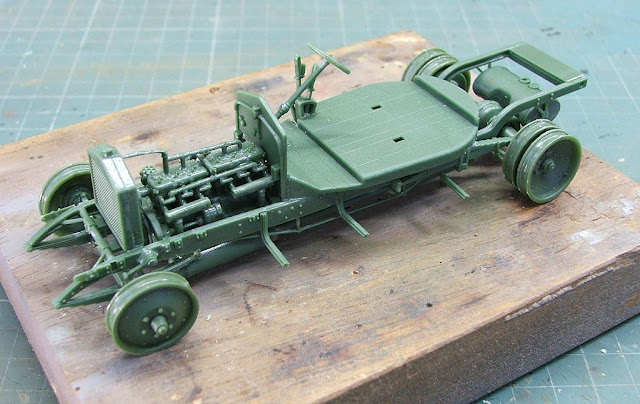 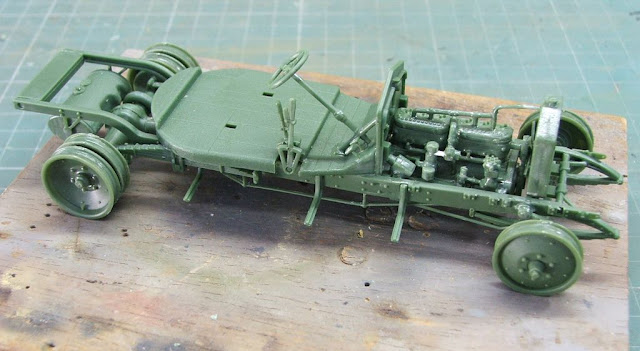 And the car with field modifications: 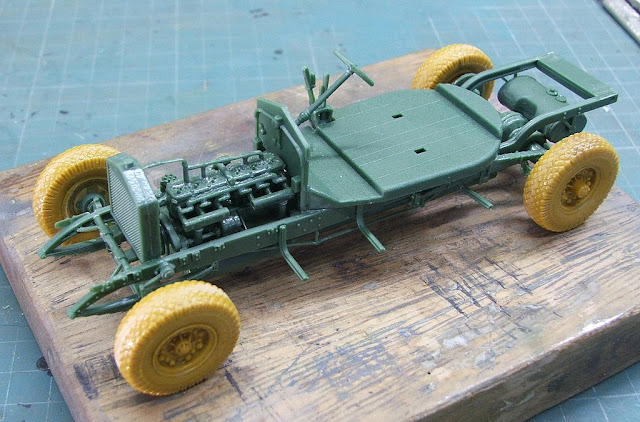 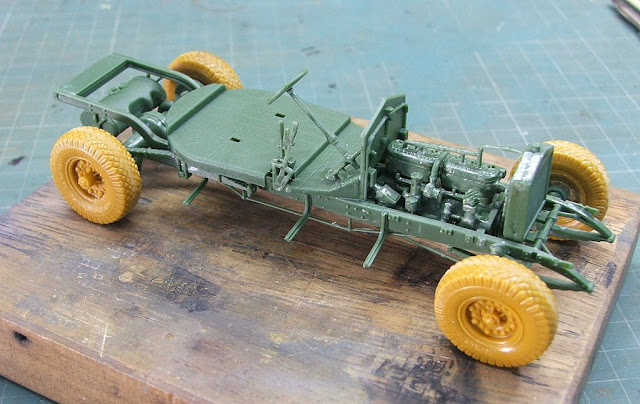 Well, the project grows up...My workbench, today morning:
I painted the chassi and the engine in black. Radiators and front fenders in position:

I advanced in this Girls, too ... See below. In the Rolls with buggy tires, I did an armor with plasticard, in the rear. The idea is the adaptation in this field veteran. Also the radio was installed (notice the aerial in the rear ...).

After the primer ( the photo was horrible...), I painted the Girls with desert yellow: 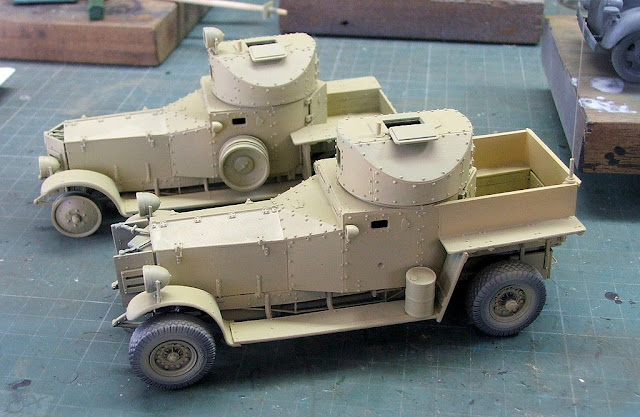 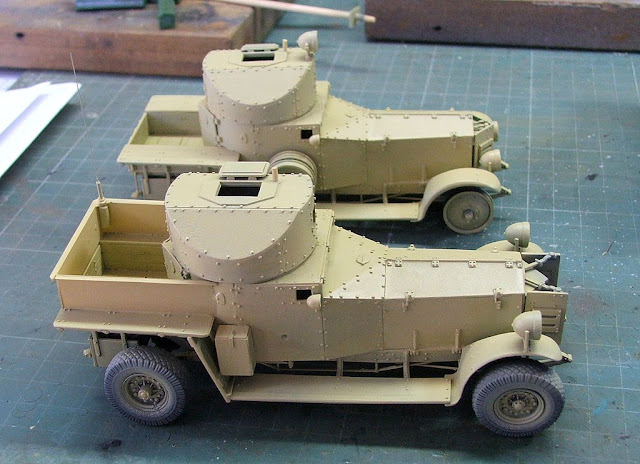 And the Rolls Ladies. Shades in the desert yellow:


I made the decals for my Frankenstein Rolls too...and I applied the decals in the cars: 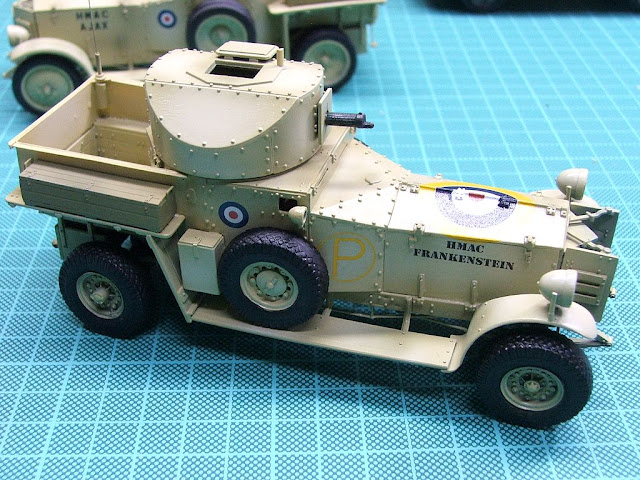 I finished these two girls as well, along with the Ford Van. Although my initial idea was to make the "Frankenstein" girl further damaged, I opted to make the model converted into something else well maintained. I pity to "destroy" a kit ....
To me, Roden kits a bit disappointed by the quality and thickness of the plastic. But with a little hard work, the vehicles were very cute ... 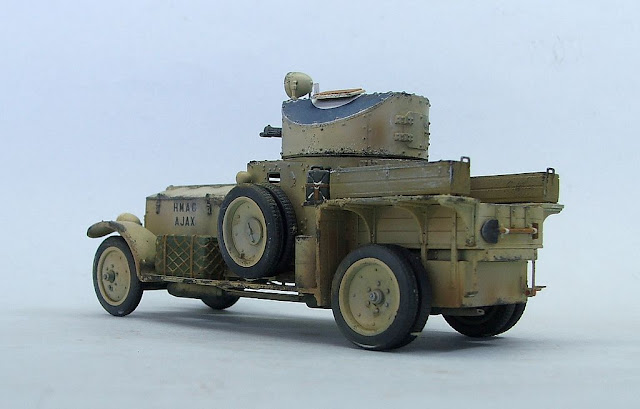 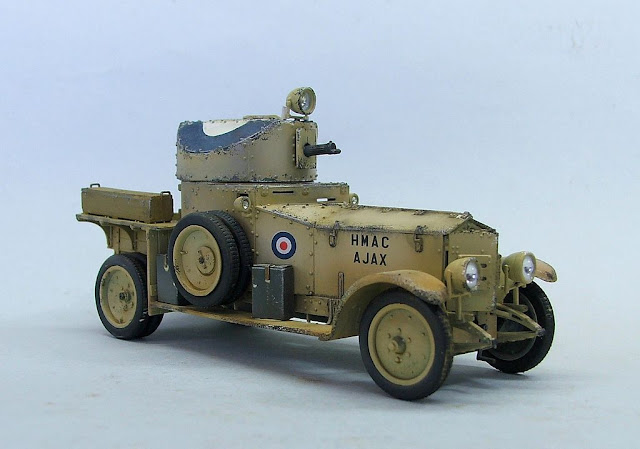 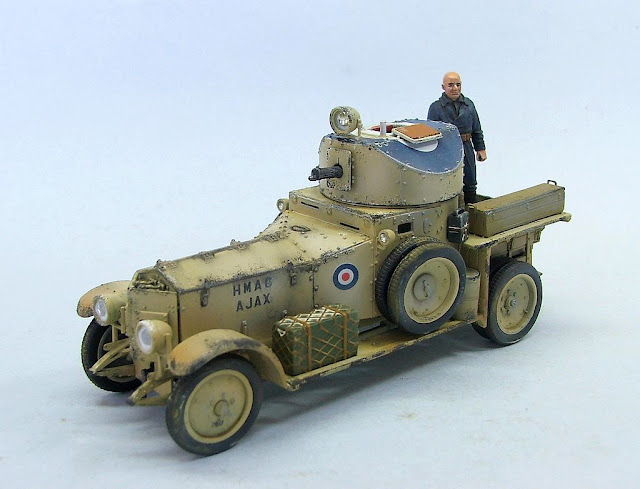 And the "Frankenstein" , the field modified car: 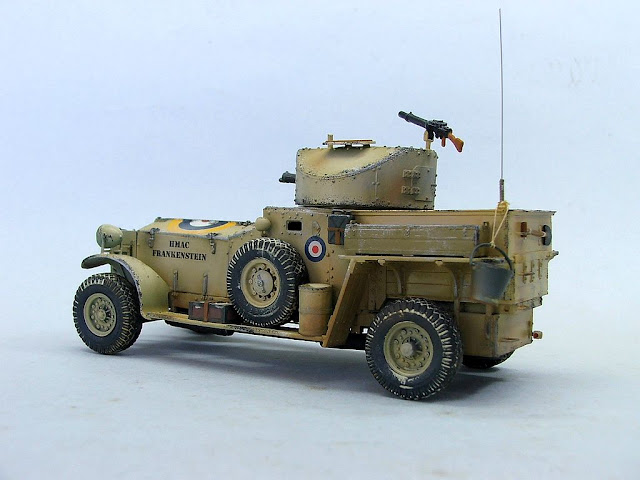 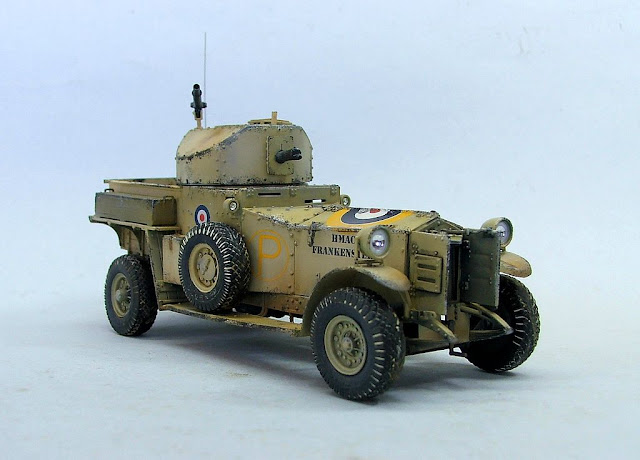