After the Tortoise, I decided to build this rare vehicle, manufactured by Alan, in 1/35 scale. The kit is very simple and old. Let's see the result of our efforts ... will be a quick build, just to relax.
The two versions of Alan´s kit box: 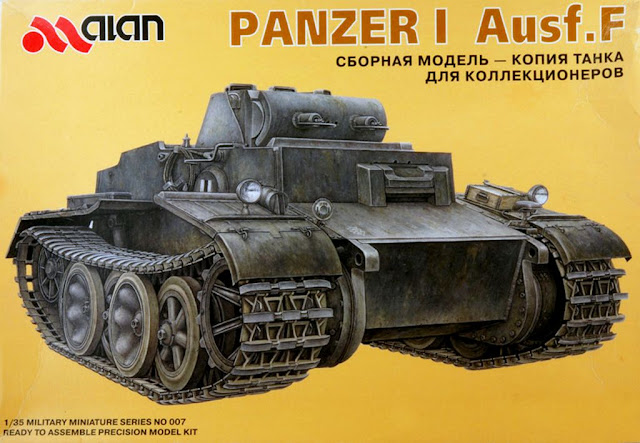 History:
The Panzer I Ausf F was the last development of the tiny Panzer I series. Following the 1939 Polish campaign the Germans decided they needed a well-armored infantry support tank. In September 1939 work started on designing a new heavily armored infantry assault tank based on the Panzer I. This new 21-ton tanks was originally given the prototype designation VK1801, but was later officially designated Panzer I Ausf F.

It varied from the early Panzer I design with increased armour and new suspension. The design brief called for the tank to mount the maximum armour protection possible. It has 80mm frontal armour, 50mm on the side and rear, and 25mm top and bottom. However, the armour had little or no slope. Interleaved wheels with torsion bar suspension and wide tracks were used to disperse the increase in weight. It was powered by a Maybach HL 45P engine giving a top speed of 25 kph and a range of up to 150 km.
Some of the designs featured utilised early developments of the Panzer I, such as the interleaved wheels with torsion bar suspension, which first featured in the Panzer I C reconnaissance tank. It also used the same powerplant.

Due to its intended purpose as an infantry support tank, the turret was fitted with 5 periscopes in the turret roof to allow the tank’s command good vision to the front and sides while the hatch was closed. In addition a binocular telescope allowed for the sighting of the machine-guns. The driver was well provided for with both a sliding shutter vision port and a roof mounted periscope. It was armed with two MG-34 machine-guns mounted in the turret. It had just a crew of two, a driver and a turret commander.
While invulnerable to most anti-tank weapons of its time, its low speed and light armament limited it to expressly anti-infantry operations. Only thirty were produced by Krauss-Maffei from April through December 1942.
The Panzer I Ausf F saw action on the Eastern front with 1. Panzerdivision and 12. Panzerdivision in 1943. Some were also used in anti-partisan duties in Yugoslavia and with training units. (font: http://www.flamesofwar.com) 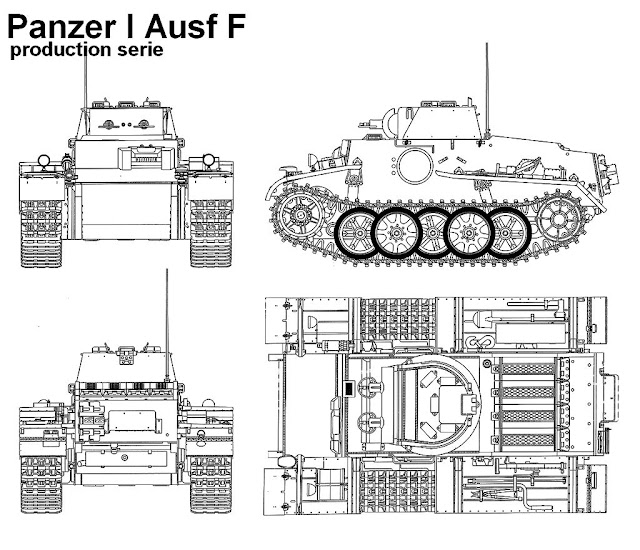 The kit:
As I had mentioned earlier, the kit is very simple. comes packaged in a thin cardboard box with the pieces in a single sealed plastic bag.
Accompany a simple instructions leaflet and a small decal sheet. The (good) tracks are link-by-link. No photo-etcheds or metal guns. Really, a very old kit ... 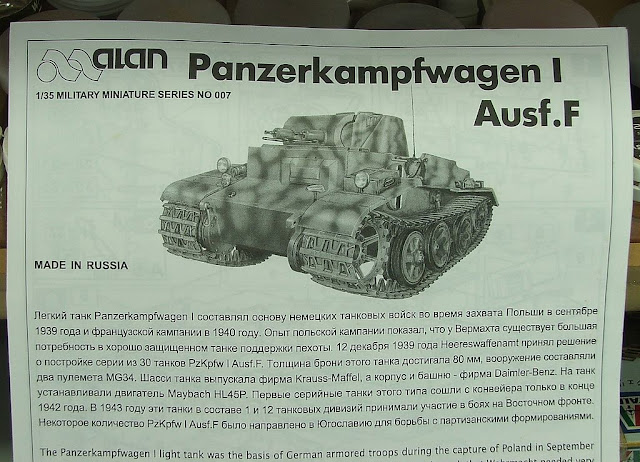 I started the building by the book: Hull under construction...

In the rear armour,I decided to improve the kit, adding a nylon net in the region of muffler.

The hull is growing. Notice the side hatches. 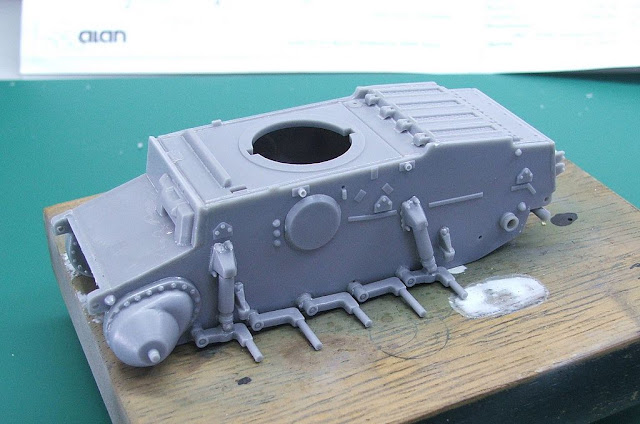 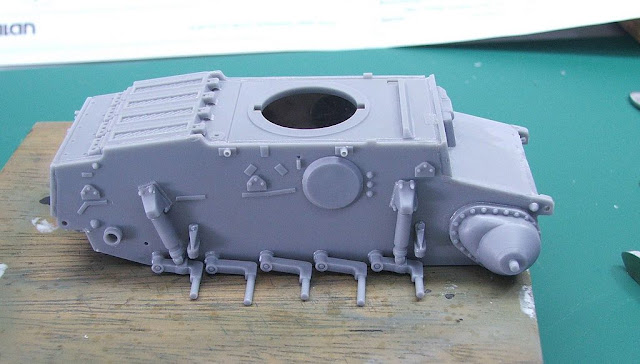 Notice the escalation of the suspension arms: From front to rear: short - long-short-long-short.
And the interleaved wheels in position: 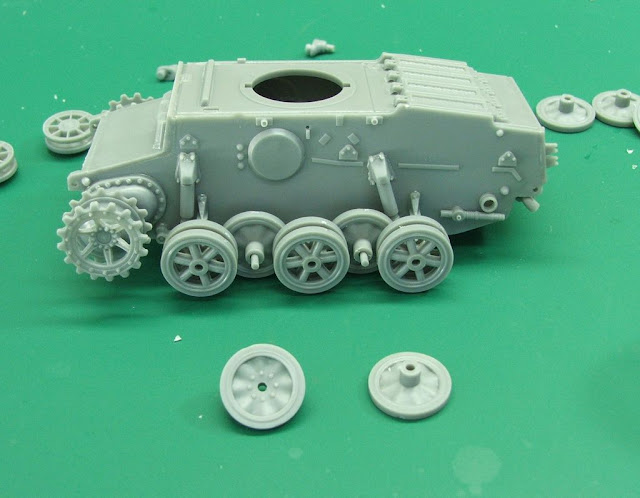 In the turret building, some details easy to do: open the rectangular holes in the machine guns mantlets: I used Dremel with dental drills.

The plastic machine guns were crap. I made my Mgs with RBModels MG 34 plus medical biopsy needle for the barrel. One little surgery was necessary...
And the turret with better guns...

Sunday I managed to advance the work on this little beast. I started to build the tracks. I simply don´t like link-by-link. They are very annoying to build ...Beautiful, but boring.
My two cents !!!
Notice the details in metal (beer can and cooper wire) - the plastic parts from the kit were horrible..

Fenders and tracks in position...The little bug is getting to look like a real tank!!! 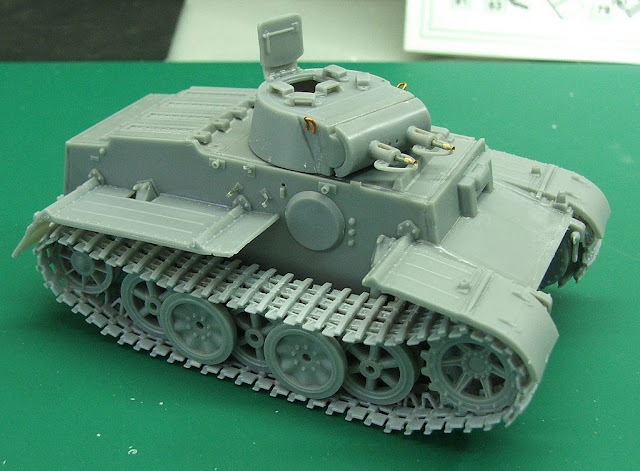 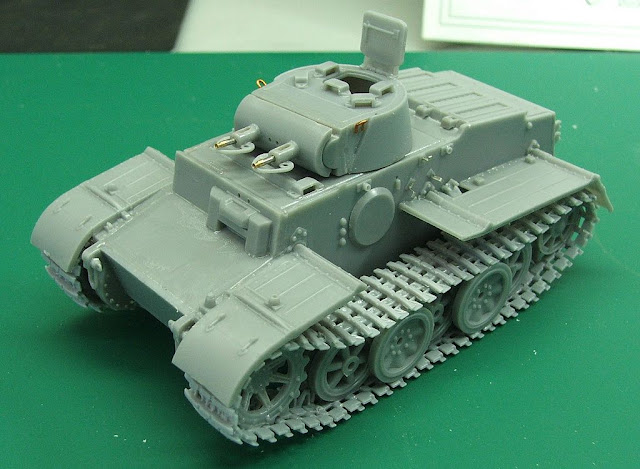 Here is an example of replacing a plastic piece (horrible) by a copper wire.

The kit is ready for primmer, now!!! 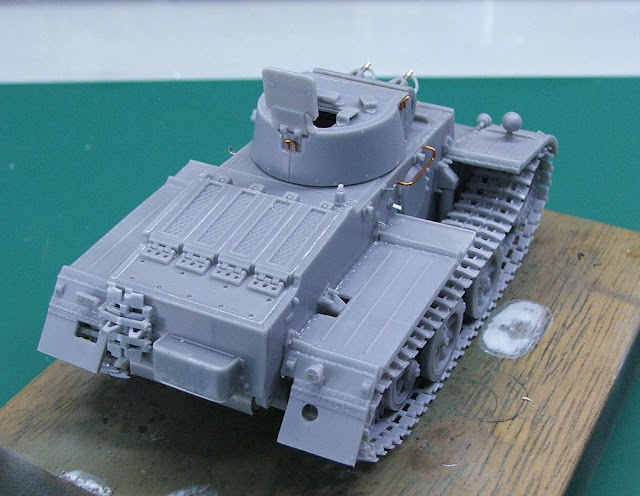 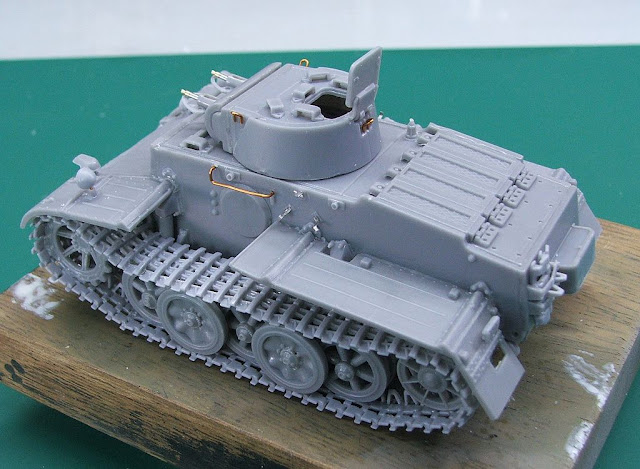 I painted the two light girls today ...After the boring gray primer, I covered the two girls with dark-yellow...
After a layer of Future, to prevent silvering, I marked my Pz I Ausf F with the colors of 7th SS Freiwilligen- Gebirgs- Division Prinz Eugen, used in anti-partisan duties in Yugoslavia, 1943.
The Panzer I Ausf F was finished: 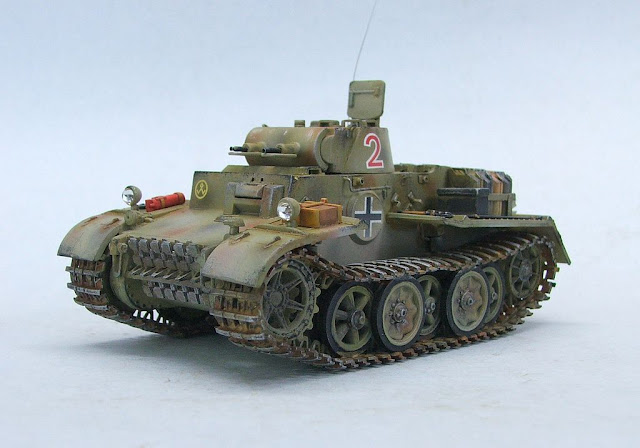 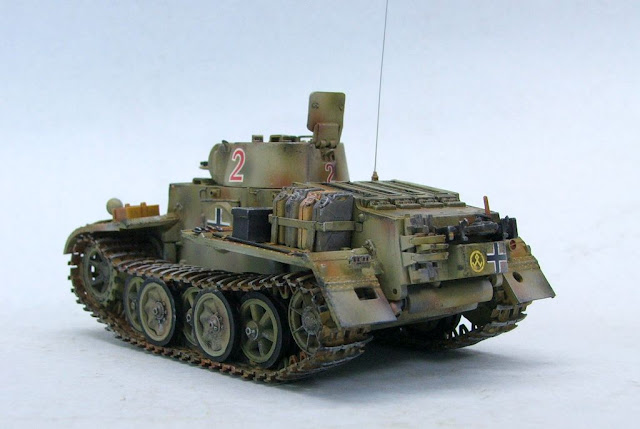 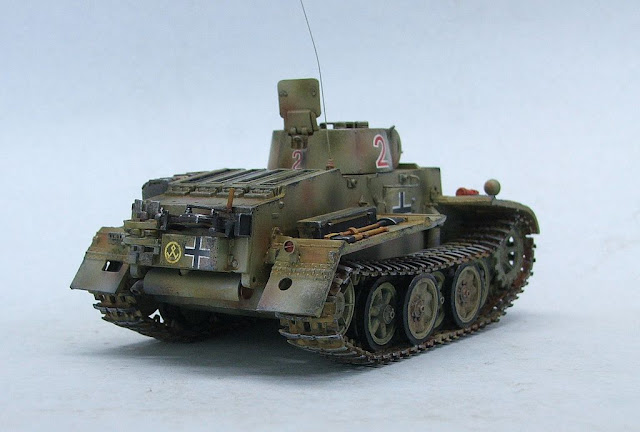 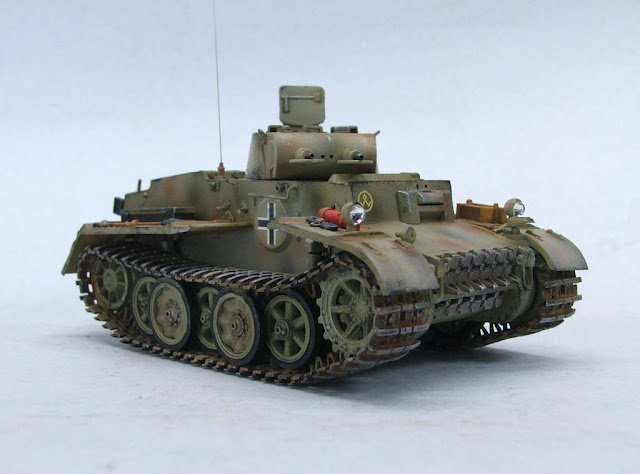 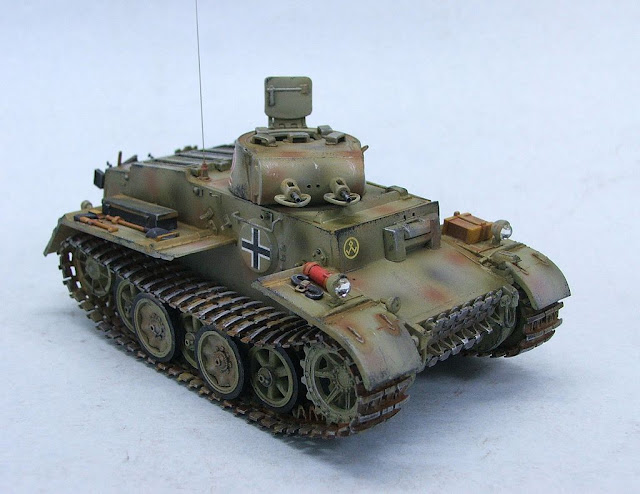 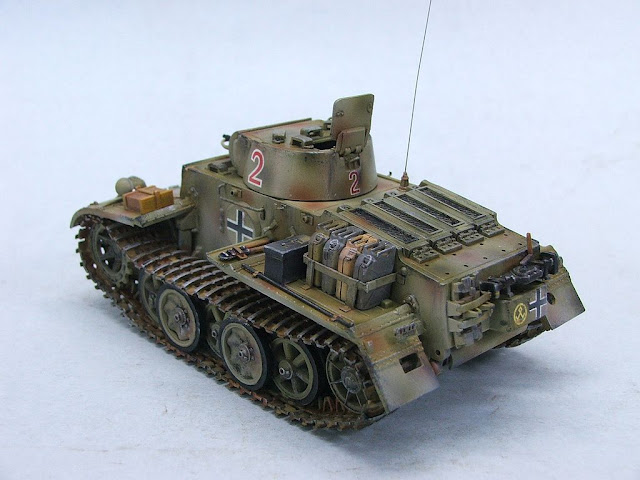 These two kits were very interesting to build. Although old and rustic, compared with the more modern and current kits, with a little work and effort, they well represent the original vehicles.

Now, it's time for another project ... stay tuned!!