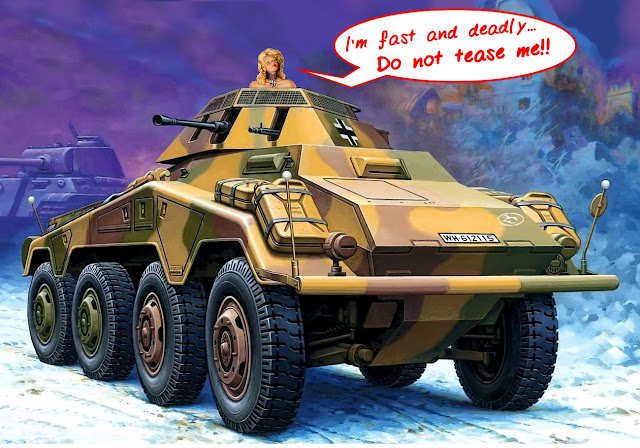 History:
The Sd.Kfz. 234 (Sonderkraftfahrzeug 234, Special Purpose Vehicle 234), was a family of armoured cars designed and built in Germany during World War II. The vehicles were lightly armoured, armed with a 20, 50 or 75 mm main gun, and powered by a Tatra V12 diesel engine. The Sd.Kfz. 234 broadly resembles the appearance of Sd.Kfz. 231 (8 rad).
Development:
Armoured wheeled vehicles were developed early in Germany after the end of World War I, since they were not subject to the restrictions of the Versailles Treaty. The Sd.Kfz. 234 belonged to the ARK series (type designation of the chassis) and was the successor to the earlier Sd.Kfz. 231/232/233/263 (8-Rad), which belonged to the GS series.


The combat experience of fast-moving, hard-hitting wheeled reconnaissance vehicles during the Wehrmacht's early invasions of Poland and France impressed German military officials, but indicated some deficiencies in existing designs. A new armoured car project was thus undertaken in August 1940, incorporating several lessons from the Wehrmacht's own external operations. The latest Büssing-NAG Sd.Kfz. 232 variant, the Sd.Kfz. 234 was designed later that year. It was to have a monocoque chassis with eight wheels, and an air-cooled engine for use in North Africa.
Chassis were built by Büssing-NAG in Leipzig-Wahren, while armoured bodies were provided by Deutsche Edelstahlwerke of Krefeld and turrets by Daimler Benz in Berlin-Marienfelde and Schichau of Elbing, with engines from Ringhoffer-Tatra-Werke AG of Nesselsdorf. 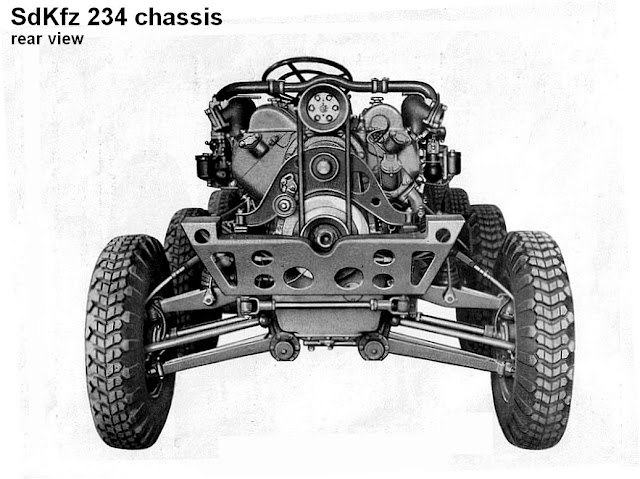 The first trials with the prototype started around July, 1942. Due to problems with the excessive noise of the first engine, a second model was developed, the Tatra 103. Power was provided by an air-cooled Tatra 103 diesel engine. The Sd.Kfz. 234 was the first and only German armoured vehicle to use an air cooled diesel engine. This was originally intended as a temporary solution until the engine could be redesigned to function better in harsher tropical climates, however, this never eventuated and thus the Tatra 103 was used until the end of production.
The vehicle had eight-wheel steering and was able to quickly change direction thanks to a second, rear-facing, driver's seat; the transmission had six forward and reverse gears, with traction over the eight wheels. 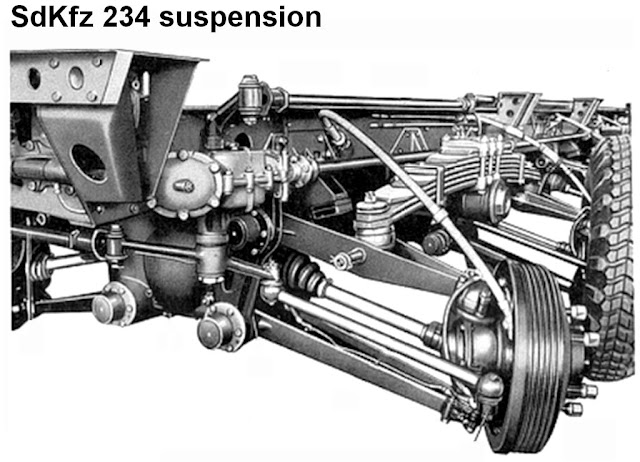 The first and possibly best known version was the Sd.Kfz. 234/2; it had a turret armed with a 5 cm L/60 gun, which was originally intended for the VK 1602 Leopard light tank.
Nicknamed the "Puma", the SdKfz 234/2 heavy reconnaissance car was produced from late 1943 to mid 1944.
This variant was replaced in production by the second version, the Sd.Kfz. 234/1, which had a simpler open turret (Hängelafette 38) armed with a 2 cm KwK 38 gun; it was manufactured from mid 1944 to early 1945.
The SdKfz 234/3, produced simultaneously with the 234/1, served as a support vehicle for the reconnaissance vehicles. It had an open-topped superstructure, in which a short-barreled 7.5 cm K51 L/24 gun was installed. This gun was intended for use against "soft" targets; however, when using a hollow charge shell, the penetration power exceeded that of the 5 cm L/60 gun. This variant was produced from mid 1944 to the end of 1944, before switching production to the 234/4.
The final variant produced was the Sd.Kfz. 234/4, which replaced the L/24 gun with the 7.5 cm L/46 PaK 40. This was yet another attempt to increase the mobility of this anti-tank gun; however, the 234 chassis was stretched to its limits. This variant was manufactured from the end of 1944 to the end of hostilities in 1945.

Service records:
Protracted engine development meant that the desert campaign was over before the 234 arrived, but it nevertheless proved useful on the Eastern and Western Fronts. It was quite formidable, but not many were built before it was replaced by the simpler 234/1, with a 20mm gun, in 1944.
The Sd.Kfz. 234 was commonly used in pairs, one equipped with a long-range radio communications kit while the other possessed only a short-range radio. The long-range unit was identifiable by the large "star" antenna on the left side of the vehicle.

Sd.Kfz 234/1:
The Schwerer Panzerspaehwagen (2 cm) was basically the same vehicle as Sd.Kfz.234/2, but fitted with lower profile turret (2 cm Hangelafette 38 - suspended mount) armed with 20mm KwK 38 L/55 gun and 7.92mm MG 42 machine gun. The turret was a simplified version of that used on Sd.Kfz.222 4-wheeled armoured cars.
The main armament allowed it to be used against ground targets as well as low flying enemy planes and some 250 rounds of ammunition were stored inside the vehicle. The vehicle was lighter than Sd.Kfz.234/2.
Some 230 vehicles were produced by Buessing-NAG from June of 1944 to March of 1945 - chassis number 5101 to unknown. Vehicles were issued to reconnaissance units in Panzer and Panzergrenadier Divisions but some were also issued as replacements to other units. The Sdkfz 234/1 was issued to troops starting in June 1944. 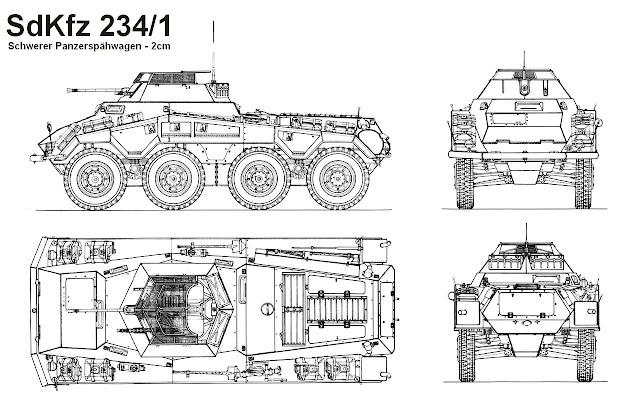 The kit:
Well...this project was born after a gift of a friend: a kit in a bag!!
I got this semi-assembled kit from a colleague and decided to get it out of its "packaging". As you can see, it is a SdKfz 234/1 from Italeri (#294).
It came without instruction manual and with many parts missing ... but still with decal shet!!!

Well...lets start!! For the damaged wheels: Replacement. Wheels with chains from Electric Products. A good exchange !!!

I decided to change the markings of my young lady. I chose the famous 116th Panzer Division (116. Panzer-Division), the Greyhound Division (Division Windhund). This SdKfz 234/1 was serving in Saint Vith, Ardennes, at the Battle of the Bulge, December 1944. 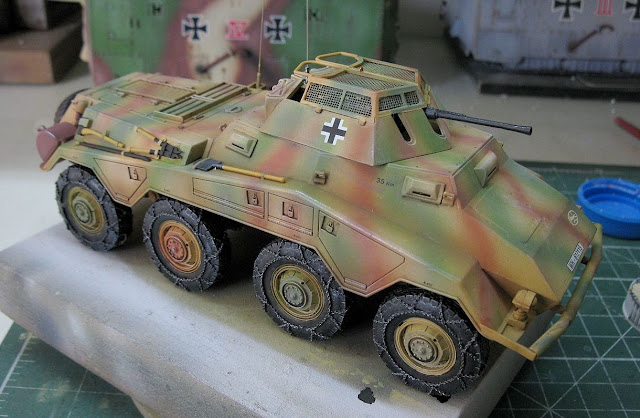 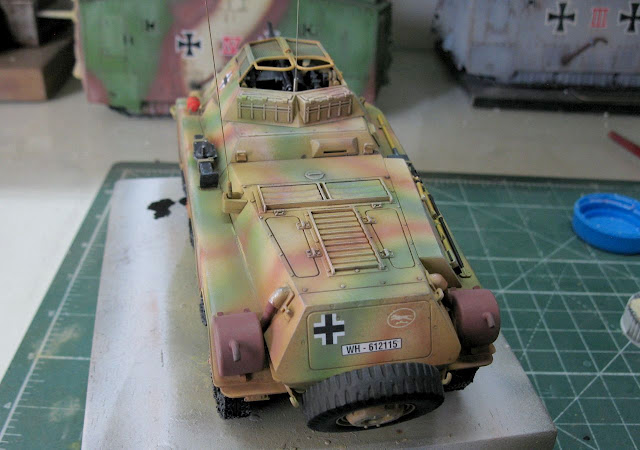 The absence of the jerry-cans in the front fenders requires compensation: Time to use the always great Value Gear Details  I love these accessories!!! 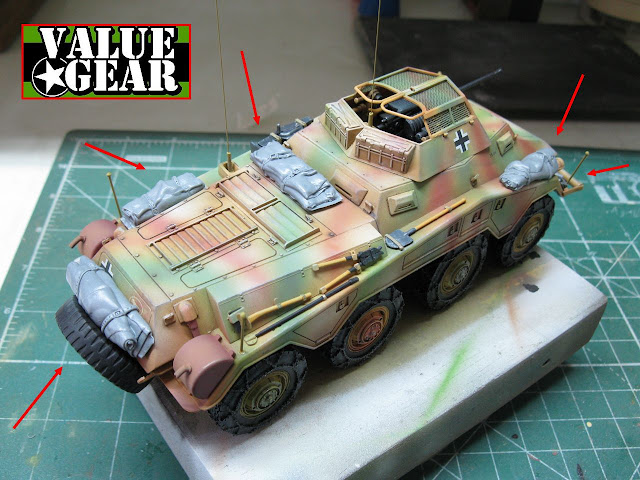 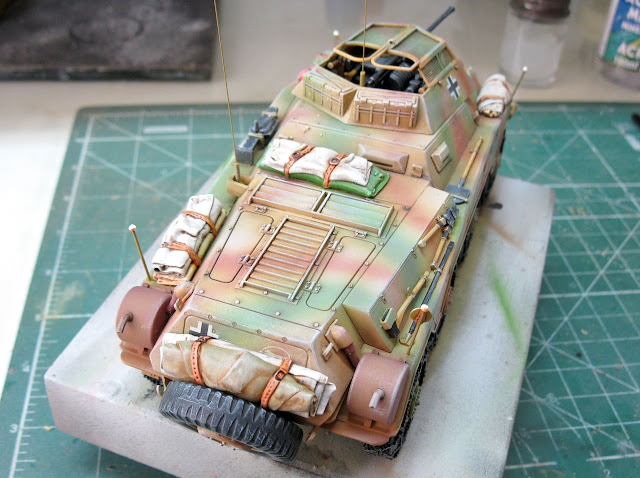 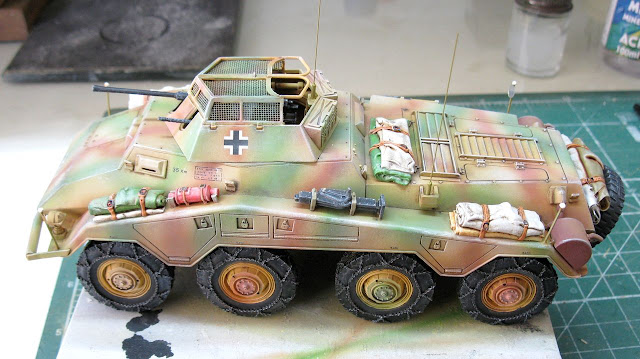 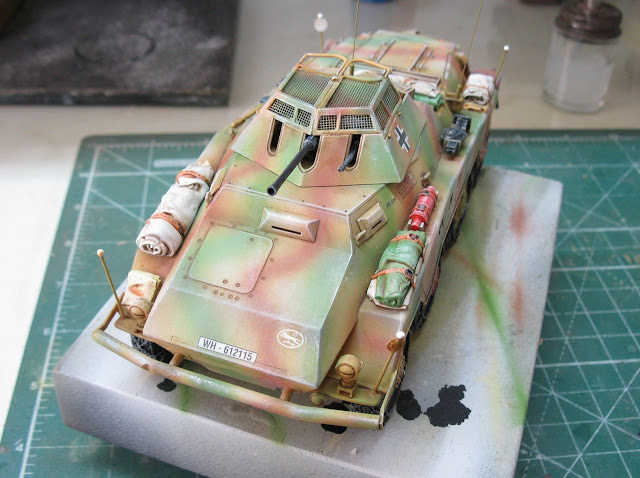 After a scolding from my friends Alain Drèze and Christophe Jacquemont, I repainted the extinguisher, removing the flashy red color for something more real. Many thanks, guys !!! And I took advantage and made this field adaptation to overcome muds: two logs of wood (pomegranate branches) tied in the front bumper. Let there be the thaw and the spring of 1945. 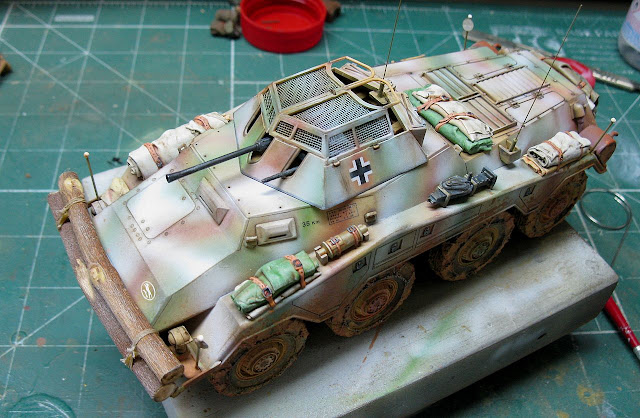 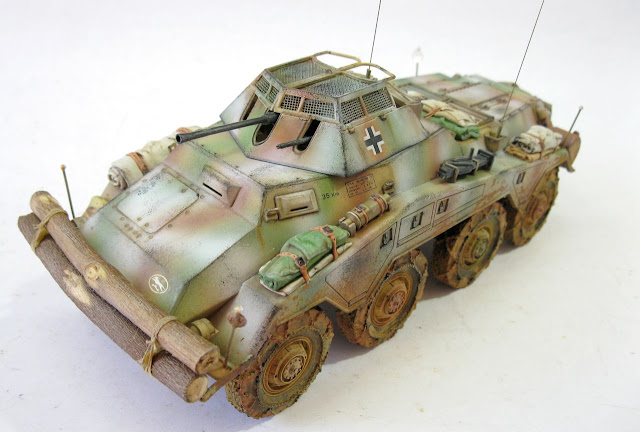 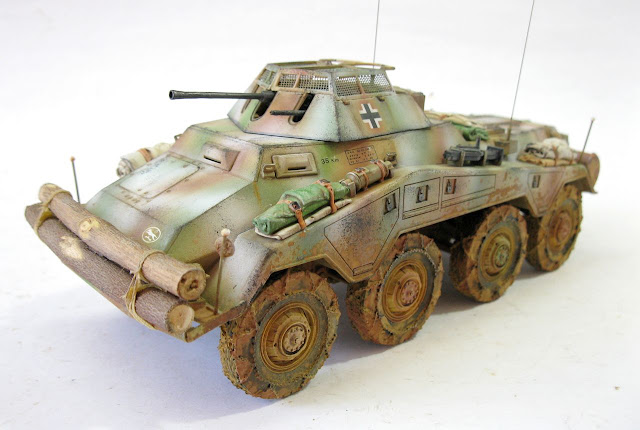 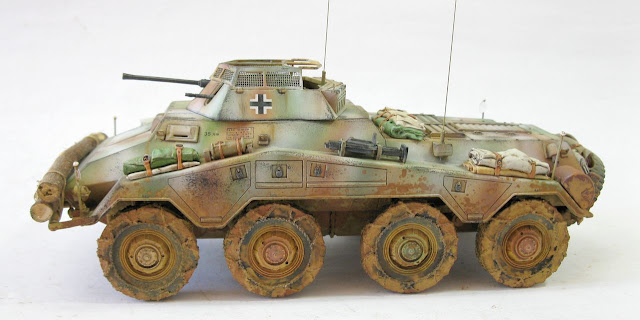 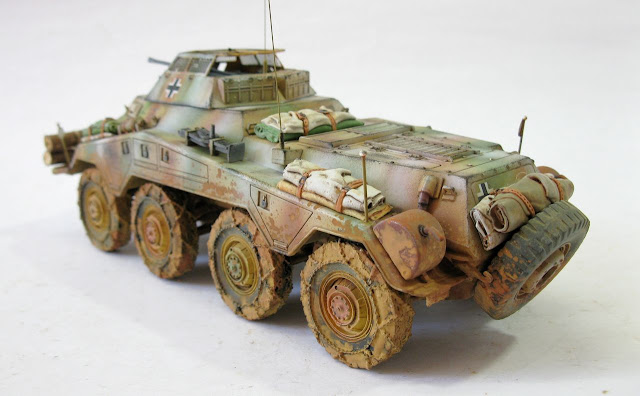 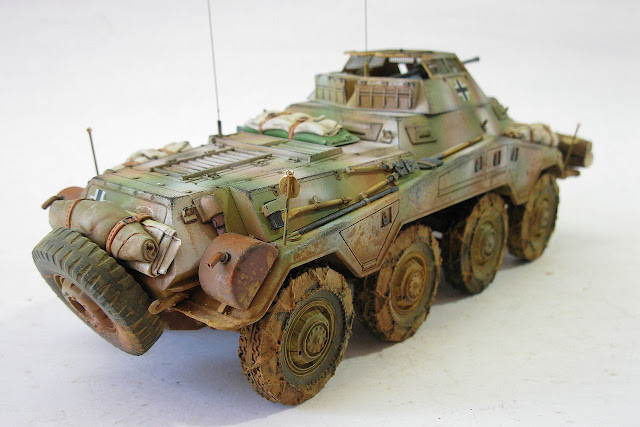 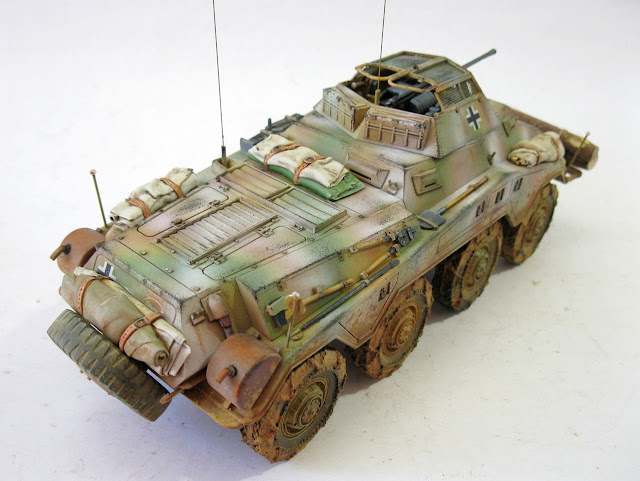 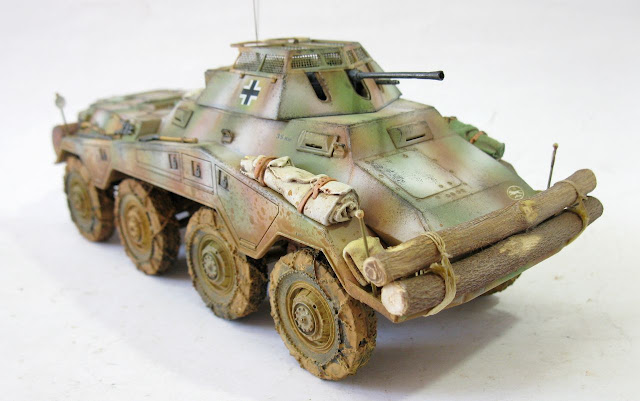 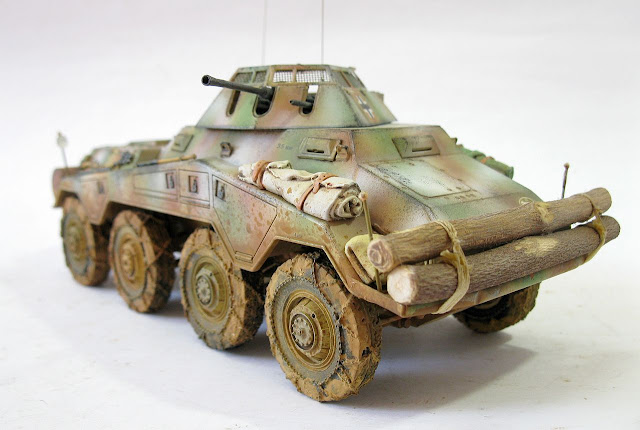 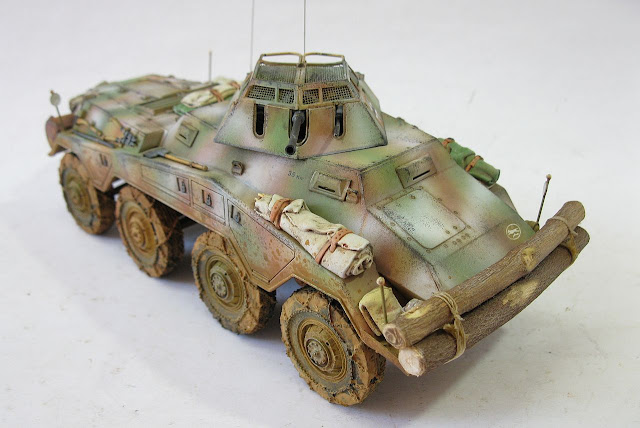 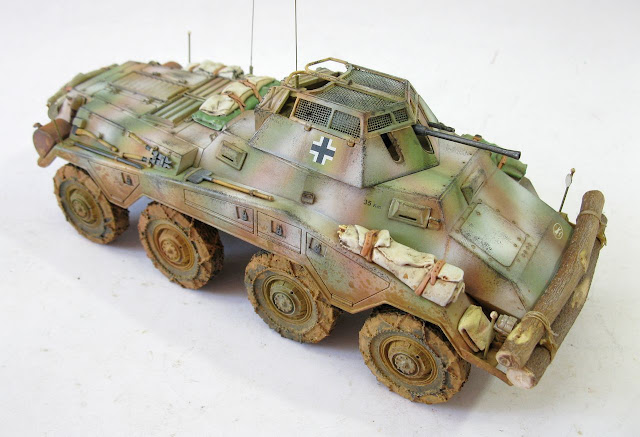 I loved this project... i really like transform old, cheap or crapy kits in beautiful girls for my collection. This "bag-kit" landed in my workbench with missing parts and without many expectations, but with a little care, dedication and lots of fun I think I could turn this little scrap in a representative part of the History of the Human Conflicts. I hope you have enjoyed it as much as I liked.