Well, Gentlemen ... Christmas Eve and I at home without being able to build my kits because, my workbench is under construction... So, let's see some kits that I built and not published here.  And as my last presentation was a AEC vehicle, we will continue in this brand, but with British markings... 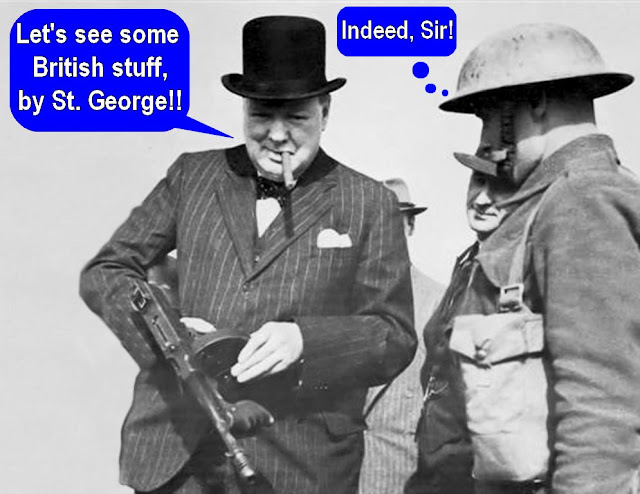 AEC Mk I British Armoured Car. I built this beast in 2007...wow !!!
History
AEC Armoured Car is a series of heavy armoured cars built by the Associated Equipment Company (AEC) during the Second World War. The firm AEC of Southall, Middlesex was a manufacturer of truck and bus chassis and its Matador artillery tractor was used for towing medium field and heavy anti-aircraft guns. The armoured car based on the Matador chassis was developed initially as a private venture and shown to officials in 1941 during Horse Guards Parade in London, where it made a favourable impression on Churchill. A total of 629 units were produced in 1942-1943.
AEC tried to build an armoured car with firepower and protection comparable to those of contemporary tanks. The first version carried a Valentine Mk II turret with 2 pounder gun. Subsequent versions received more powerful armament - a 6 pounder or a 75 mm gun. The vehicle also carried two machine guns, smoke grenades discharger and No. 19 radio set.

The Mk I was first used in combat in the North African Campaign late in 1942, where a few vehicles were reportedly fitted with a Crusader tank turret mounting a 6 pounder gun. The Mk II / Mk III took part in the fighting in Europe with British and British Indian Army units, often together with the Staghound.
The vehicle remained in service after the end of the war until replaced by the Alvis Saladin. The Lebanese Army used the car at least until 1976.

Variants
Mk I - original version with turret from a Valentine tank. 129 units built. Equipped with turret armed with a gun of 2-pdr (40 mm) and a coaxial machine-gun Besa of 7.92 mm. These two weapons pointed in elevation of -15° to +15°. The traverse of the turret was assisted but for the elevation the shoulder of the gunner was used. The AEC Mark I was also equipped with a grenade thrower (smoke-producing) and an anti-aircraft machine-gun Bren .303cal (7.7 mm). Carrying in ammunition was of 58 rounds for the 40 mm, 2925 rounds for Besa of 600 rounds for Bren. The shielding had a thickness varying between 6.35 mm and 57 mm. The driver was installed in front of the vehicle, the station of combat and the turret in the center and the engine at the back. In the turret the commander was located on the right and the gunner on the left.
Mk II - heavier turret with a 6 pounder gun, redesigned front hull, 158 hp diesel engine.

Mk III - It was nearly identical (some minor modifications) to Mark II but was equipped with an armament even more powerful (a gun of 75 mm). It accomodated moreover one fourth man of crew. 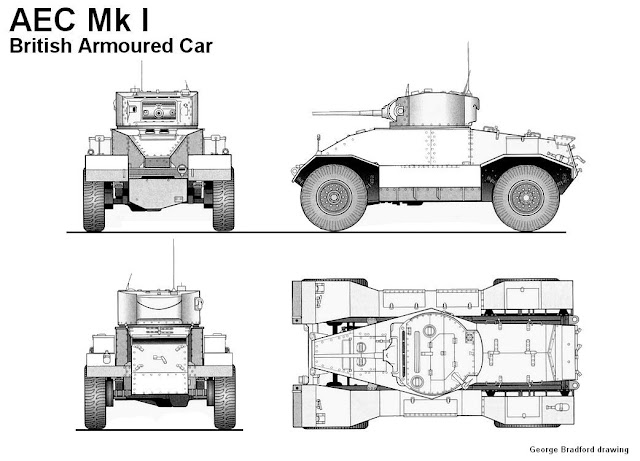 The kit:
I build my AFV with the mix-media kit from Maquette.  This is the box art:

The resin parts was well casted and aligned, with no warps or twists...In this case, Maquette surprised me wonderfully well...

Building the fenders. Much care in this stage...
Suspension and transmission time:
When the hull dries, I'll build the turret...Oh, my God...Maquette strikes again !!!!  See the gun mantlet...
Plastic and putty for surgery...


The plastic parts were rotten, but the parts in resin, excellent... Who understands Maquette?? 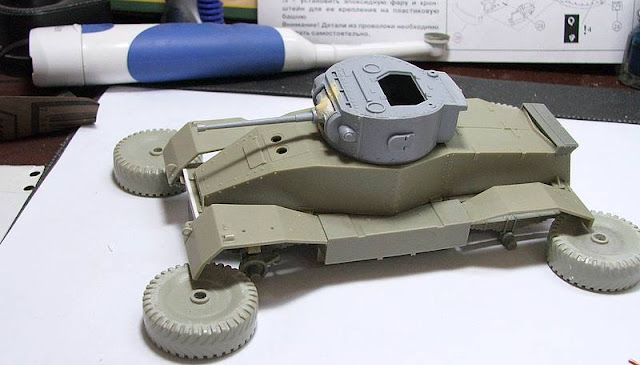 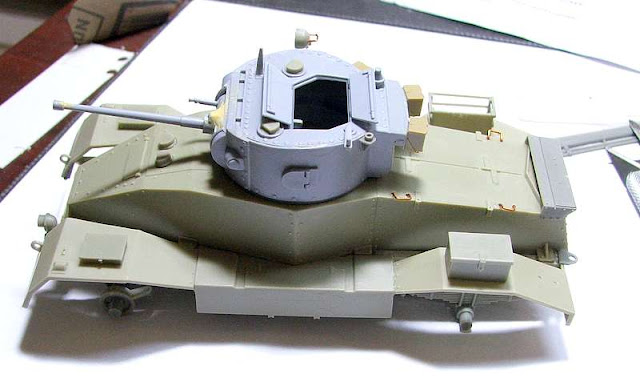 In this stage, I decided scratch the sand rails with aluminium foil (beer can)
It's the primer time:
And desert yellow, with tonal variations: 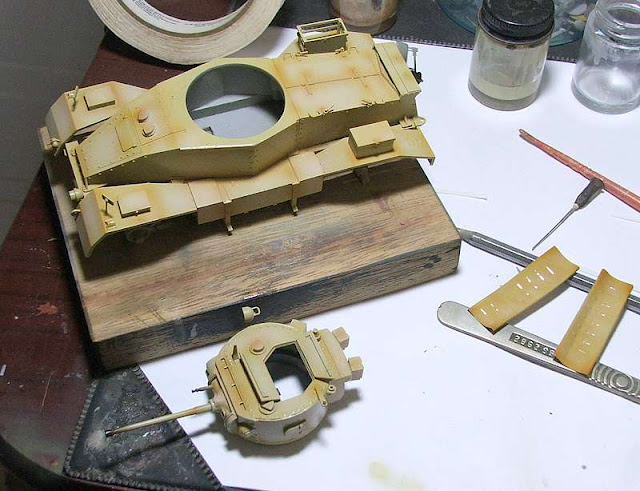 I decided baptize my girl of Maggie (nickname of Margaret, a beautiful British name for my beautiful girl). This is my decals, made with Laserjet and transparent decal film. Desert markings
The girl almost complete:
Desert markings: Maggie !!!
And Maggie was born !!! 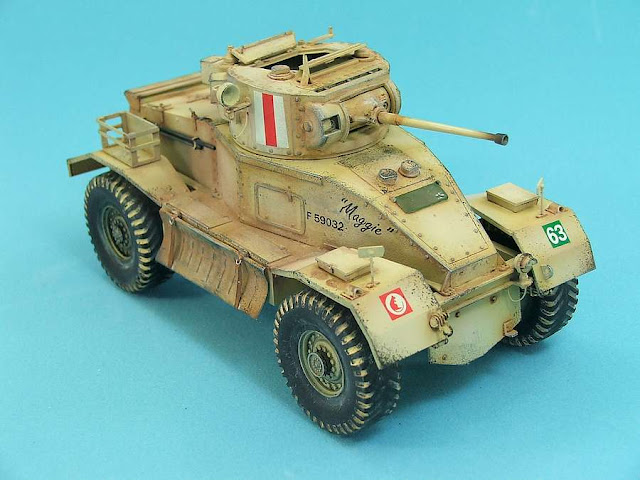 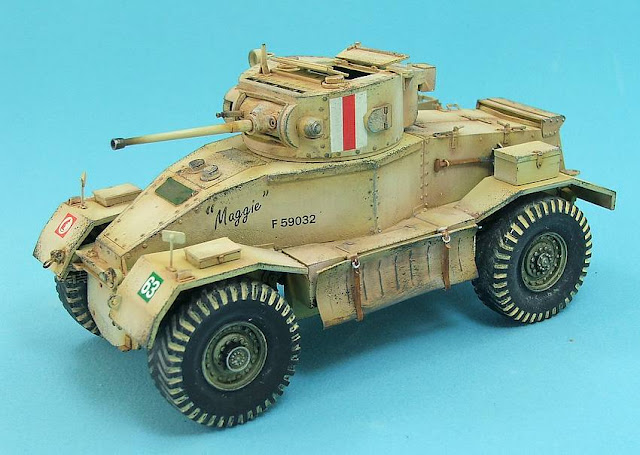 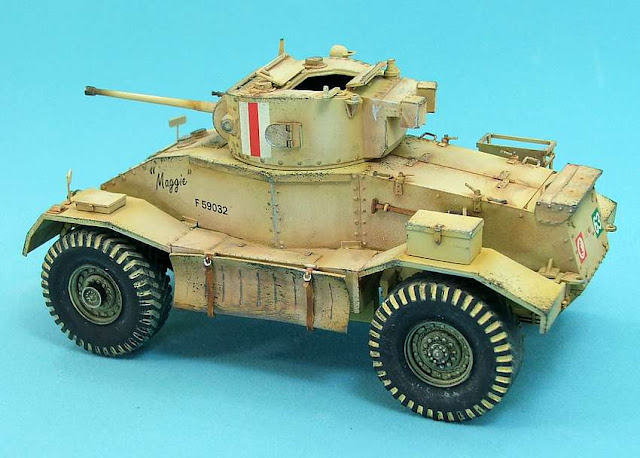 I decided correct the pistol port of the turret (the Maquette kit uses a turret with pistol port reversed). As there is a version of this car without the pistol port in the turret, I decided to eliminate one as it is much less laborious than making a correct one. I switched the 2 pdr. gun barrel in plastic by a metal one from RB Models (much better..). 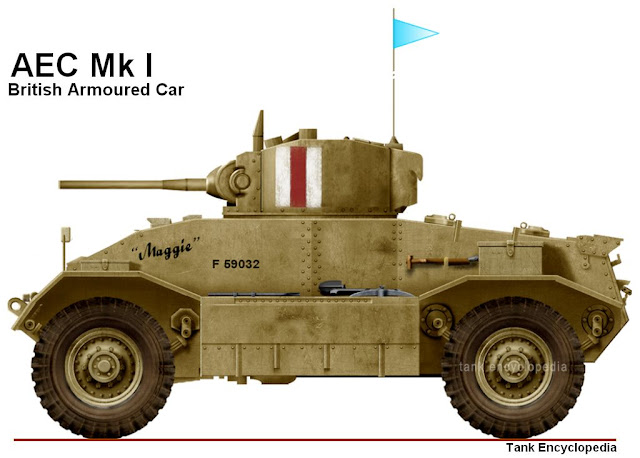 And I also closed the turret hatch. With that, Maggie was definitely ready !! See the pics below: 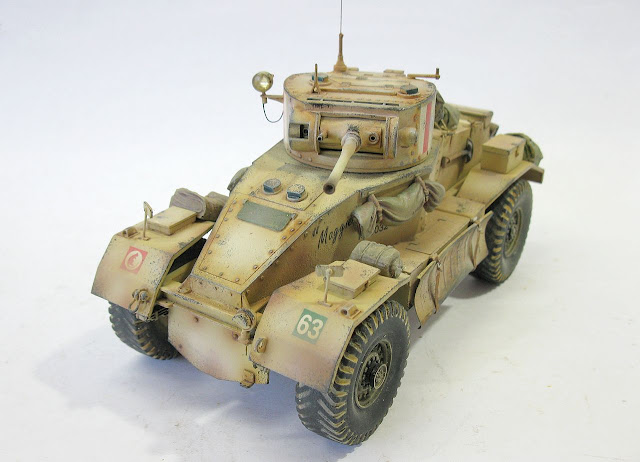 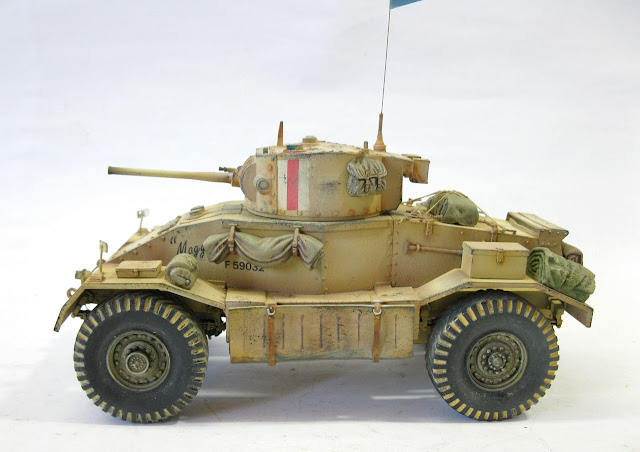 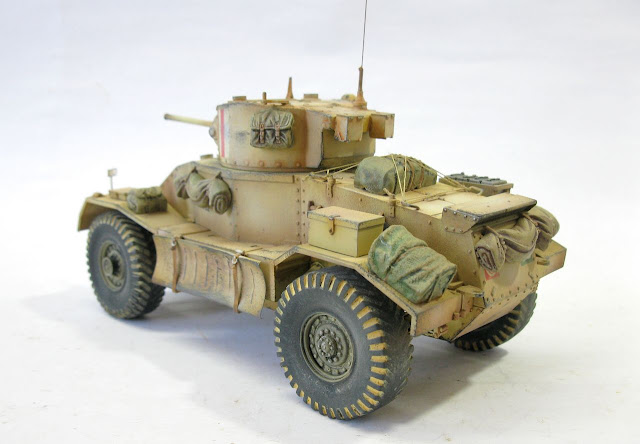 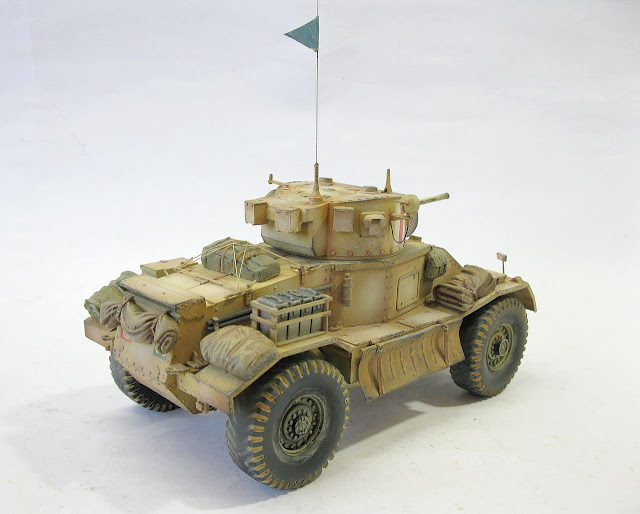 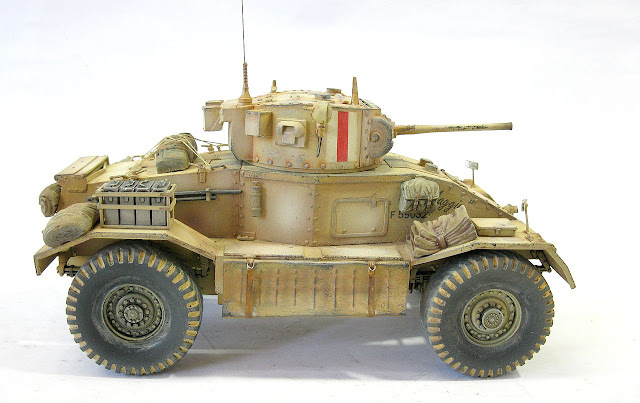 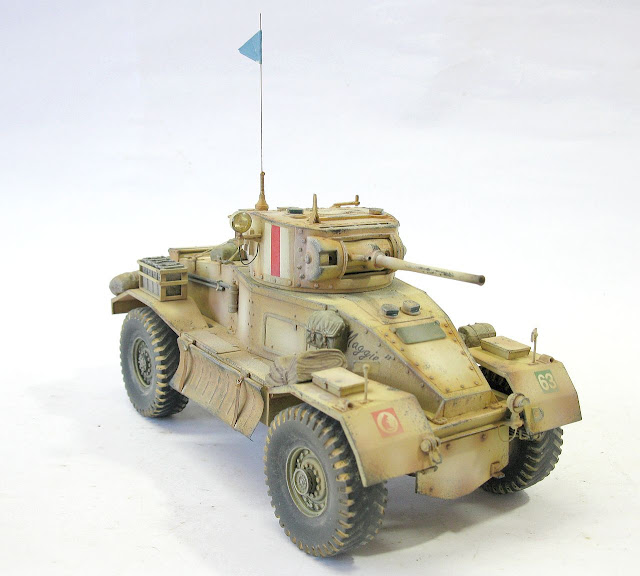 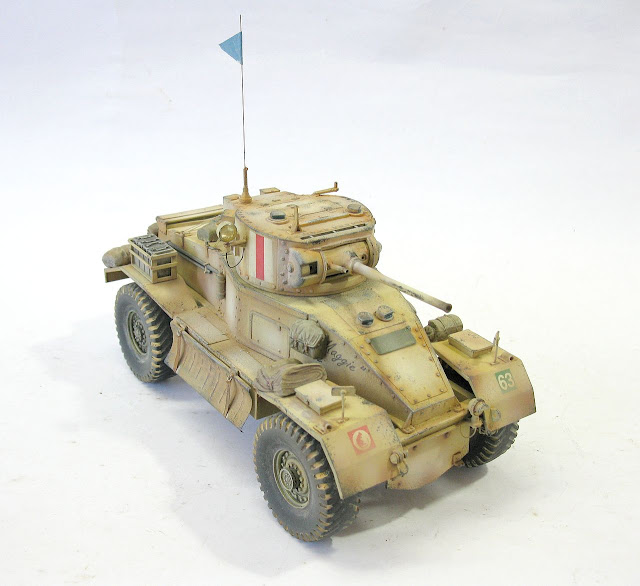 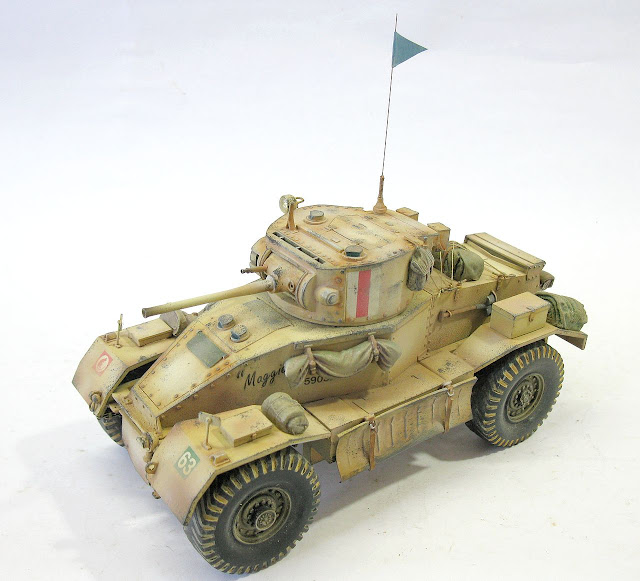 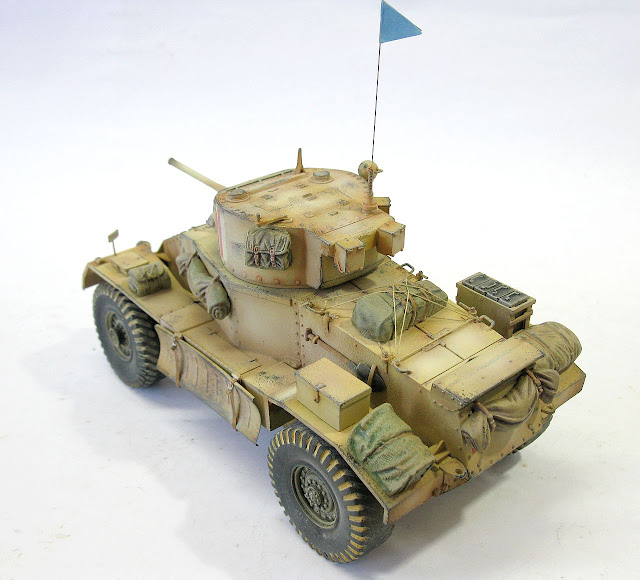 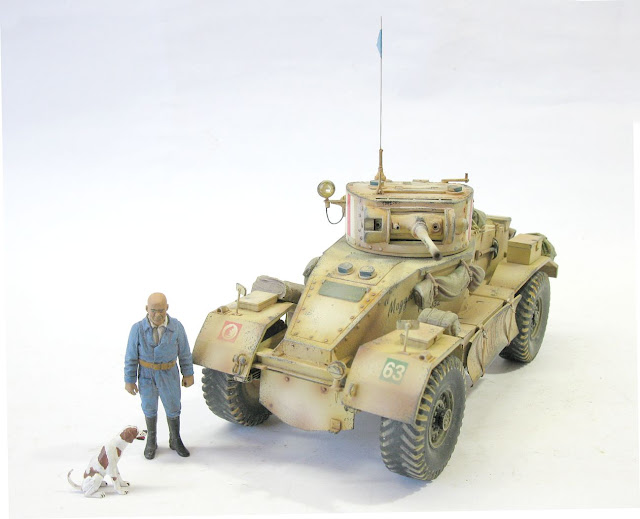