Keep eyes on the Stukas, lads!!! 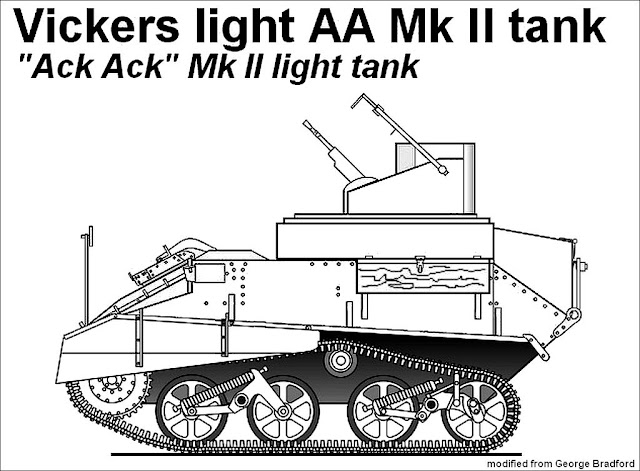 The German Blitzkrieg came as a shock to the Allied nations, with its doctrines and tactics. At the beginning of WWII, with the Invasion of Poland and the Battle of France, the attacked nations had to learn the hard way how important close air support was, brought to perfection by the Luftwaffe in the turbulent early stages of the War. The precision of the air attacks, through dive bombers masterfully executed by the Germans, devastated the defensive positions and the logistical columns, creating chaos in the core of the Allied forces. The British desperately studied these operations in an attempt to neutralize this German Cyclone.
In 1940, the British Army proposed the development of an anti-aircraft (Ack ack) vehicle that could accompany the armored columns in their movement, providing cutting-edge air protection. Two prototypes were built by Vickers using light tanks Mk VI chassis: The first one was a light tank MK VIB with an open turret armed with two 15 mm Besa heavy machine guns, with ammunition boxes projecting externally to the sides of the turret.
The second prototype was built in a light tank Mk VI chassis. The early version of this vehicle had its weapons installed in a complete power-operated Boulton-Paul type A turret, with four .303 Browning light machine guns, used by RAF planes. The concept bore a certain resemblance to the Beaverettes Mk III AA.
After, the Perspex cupola of the turret was removed and four folding armor flaps have been added to increase the protection of the gunner. Neither of these turret designed was used on the production of the AA light tanks.
Operational Ack ack light tanks:
Light AA Tank Mk I
The Light AA Tank Mk I (also known as Ack ack light tank Mk I) was the first production vehicle designed. It used the chassis of the Mk VI A or B light tanks, having its standard two-man turret removed and replaced by a new, open-top AA Mk I turret with 360º manually operated, armed with four Besa 7.92 mm light machine guns in a horizontal row.
It was installed on top of a rectangular box added on top of the original superstructure. The standard light tank carried three men, but in the anti-aircraft version the crew was reduced to two.


Light AA Tank Mk II
The Light AA Tank Mk II (also known as Ack ack light tank Mk II) replaced the Mk I version on production lines. The Mk II  version featured a slightly more spacious turret, better protected and motorized, with a new and improved aiming system, but still with the same light armament.
This vehicle also used the chassis of the Mk VI A or B version, with the early Mk II variants having the box on top of the tank superstructure of the same size as the Mk I model, with later Mk II versions featuring a box with lower height, at the top of the superstructure, perhaps to decrease the center of gravity and the stability of the fire when the turret was in a fast rotation to follow the target. Another feature of the later versions of the Mk II model was an external ammo bin on the rear of the hull, between the sloping rear face of the original tank and the back of the rectangular base for the AA turret. Strangely, there are many more photos of Mk I models than Mk II models.
The Ack ack Mk I model was effective against early machines (especially unarmored dive bombers), but in the second half of the war it was no longer suitable for destroying high-flying or heavily armored enemy units. The Ack ack Mk II model probably boasted slightly better stats than its predecessor, but its small-caliber weaponry also limited its effectiveness.
About fifty Mk VIs were converted into anti-aircraft tanks, and the plan was to give a troop of four to each regimental HQ squadron, although the numbers produced suggests that this didn't happen.
Specs: 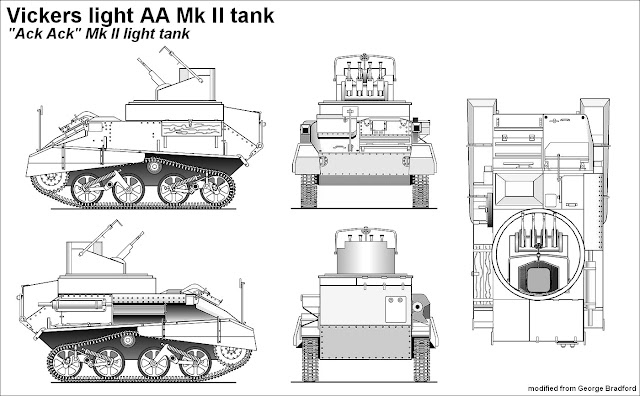 The kits:
In this commission work, I'm going to use two kits: a plastic injected (hard-to-find) kit from Vulcan Scale Models - British Light Tank Mark VIB - #56008), and the resin conversion kit from Resicast -  Vickers Light Tank AA Turret Mk.II Conversion - #351239. This Ack ack girl will be built in parallel with its older sister, the standard Vickers light tank Mk VIB, as you can see in this article.
The first thing to do is always to start by the most laborious job, that is, cleaning the resin parts. Let's separate the parts from their foundry bases and remove all excess...
The Vickers injected in plastic you can see in this article. In the left, the standard build; In the right, the future Ack ack tank, that will not use the standard turret.
First, let's install the vehicle's spartan interior which unfortunately only reproduces detail in the turret area. No details of the driver's station...
A common problem in resin kits is the deformities and contractions of the parts... And, for a change, I was drawn with a kit with some dimension deformities in its parts...
Notice below, the sheet of plasticard on the back of the turret box (red arrows) and the beginning of construction of the turret basket, with the Commander/gunner seat.
But now, things really got ugly: the machine guns' rotor of the turret is simply too narrow...Here, contraction has reached Heaven!!! And I (and Kojak, of course...) cannot admit such heresy!!!
I'm going to use the same recipe as for the box correction: rectify with plasticard, this time with a 0.6mm thick sheet that, after being glued at both ends, was hollowed out and rectified following the same internal and external perimeter of the rotor.
The supension of Vulcan kit is very delicate and full of tricks. But using the Vickers-type suspension wheel alignment apparatus, as described in the steps of the Vickers light tank Mk VIB article, the thing flows like a thousand wonders!!!!
The rearview mirror is very fragile and, being prominent, it will be the first piece to be broken when handling the model... To avoid heart attacks, replace the plastic rods with metal rods. Prevention is always better than cure!!!
With the project almost finished, it's time to look for details to improve the kit...and looking at the photo below, in addition to discovering that some Mk II turrets had the armor on the Commander's back angled (the one in the kit is the rolled plate type. ..), I noticed the presence of two chains hanging from the inner portion of the turret's frontal shield (red arrows). From the looks of it, it should be for locking the vertical drift movement of the weapons, when the vehicle is in transport. But whatever it is, it's a nice detail to add. Let's make these chains...
First, we're going to take some very thin copper wire, cut a segment more than twice the desired length, bend the wire exactly in half, and thread the bend portion through a hook made of thicker metallic wire, attached to the Dremel. The Dremel is meant to be just a stand...I won't be using electricity to turn the wire, but turning the tool's chuck by hand for more control. The important thing is to obtain a twisted yarn with a regular and harmonious appearance.
With flat and smooth jaw pliers, I crush the twisted wire, and this flattening reproduces the appearance of a very thin chain...
Stay with us, chaps!!
às janeiro 19, 2023 Nenhum comentário: