Drivers!!!
Today we are going to see a robust truck that was designed within the beautiful lines of Art Deco, as a civilian vehicle and that with the outbreak of the hostilities of the Second World War, it was summoned to serve on many fronts, in the hands of several allied countries, exercising an important work in the allied war effort. Today we are going to meet the 3 ton Dodge 4x2 MCP(Modified Conventional Pattern) truck, one of the anonymous heroes of WWII.
History:
In 1939 Dodge presented a completely new designed line of pickups and trucks. Formally the T series for 1939, V series for 1940, and the W series from 1941 through 1947, the trucks became mostly known as the Dodge Job-Rated trucks.
With streamlined, Art Deco styled front sheetmetal, and introducing the concept of "Job-Rated" truck configurations, Dodge tried to offer customers the truck that fit the job they were buying it for. As a result, the 1939 to 1947 Dodge pickup / truck range was offered in a bewilderingly large number of available variants and model codes.
Six different payload classes, a wide range of bodies, and more than twenty different wheelbase-lengths were manufactured, and fitted with different sized versions of the Chrysler-sourced inline six-cylinder side-valve engines - from the half-ton TC pickup on a 116-inch (2.946mm) wheelbase to three-ton tractor cabs. Nevertheless, mechanically, the trucks were all very similar, with solid axles front and rear and leaf springs at all four corners.
With World War II taking up most of production capacity from 1942 to 1945, the 1939 styling continued largely unchanged through 1947, as engineering and production became the main focus.

For 1939, Dodge rolled out a striking, modern design, new from the ground up, except for the updated drivetrains - and, as before, offering an exceptionally large number of available variants. In the later 1930s, streamlined styling had become a virtual requirement for anything from appliances, cars, boats, planes - even trucks, trains, and architecture. The new, 'Job-Rated' Dodge trucks followed suit, and were completely representative of the 'Streamline Moderne', Art Deco based style, inspired by aerodynamic design, and characterized by elongated horizontal lines and curving forms, to give the impression of sleekness and modernity.

The all new, all-steel cabs featured a front-end design with a barrel-shaped base, and a sharp V-shaped grille; long, sleek, crowned front and rear fenders, with embossed "speed lines" on the lower rears of each fender - and a new sloped, two-piece windshield, that could be opened for increased airflow. The headlamps were still free-standing, but were mounted in bullet-shaped pods. From the half-tons to the three-ton models, the new trucks all featured the same distinctive design - the heavy-duty models only stood out taller, on larger wheels and tires.

The unique styling of the trucks, was only really changed in 1940, when Dodge trucks began using sealed-beam headlamps and were equipped with marker lights mounted on the headlamp housing. For the most part, after 1940, year-to-year appearance changes were very minimal. The grille design was lightly changed again in 1941, and this style continued through 1947, except for the lower chrome strips, which were omitted post war.
The Job-Rated trucks had stronger frames, using steel with a higher tensile strength, and the frame-rails extended further forward past the engine than before, such that the truck's beefy, channel-type bumpers tied the rails together, reinforcing the frame. After World War II, several changes were made to production truck chassis parts, based on reliability experience gained during military service - for instance stronger differentials and larger axle shafts were used in post-war trucks, and steering boxes were beefed up as well.

After Dodge supplied the U.S. Army with its first four-wheel drive truck in 1934, more modern ​1 1⁄2-tonners were developed, and 1,700 RF-40-X-4(USA) trucks were supplied in 1938, and 292 TF-40-X-4(USA) in 1939.
In 1940, Dodge gained an Army contract to design and build ​1⁄2-ton 4×4 military trucks in several styles using many commercial truck parts. Based on the VC-Series, and internally called the T-202 series, the VC-1 through VC-6 came with essentially stock front-end sheetmetal. Similarly, their 116-inch wheelbase and 201-cubic-inch 79-horsepower six-cylinder engine shared much with Dodge's civilian ​1⁄2-ton VC. The following year, the T202 was replaced by the T-207 series trucks. Again rated as ​1⁄2-tonners, they featured a military-specific hood, grille, and fenders. These trucks were powered by the 218-cubic-inch six of 85 horsepower taken from Dodge's ​3⁄4- and one-ton commercial models. Eventually, the military trucks were substantially redesigned, and uprated to ​3⁄4-tons with a 230-cubic-inch engine with 92 Hp. Together with the 1941 ​1⁄2-tons, these were built from 1942 until the end of the war as the Dodge WC series military trucks.

Stock models and specifications
The U.S. military also used some of Dodge's light truck models in mostly stock, two-wheel drive form. Technical manuals of U.S. Army military vehicles offer some more detailed specifications on three such models: the 1947 model year WC and WD-15 models, and the 160 inch wheelbase version of the SNL G-number 618 aka the WF-32.
Additionally there were 4x2, civilian based variants built either as Canadian "Modified Conventional Pattern" called the D15 (15cwt, or ¾-ton – engineering code T-222), and the D60S and D60L (60cwt, or 3-ton, engineering code T-110, with a short 136" or long 160" wheelbase).  The Canadian models were built with a 236.6 cu in (3,877 cm3) engine with a 25" block, that was unique to them, and they had beefed up rear axles. Chrysler Corporation of Canada produced a total of 180.816 military Dodge trucks during 1939-1945. This is the vehicle of this article.
Modified Conventional Pattern (MCP):
Usually standard civil types with minor modifications to reach military needs, comprising cars, utilities, 15-cwt, 2-ton and 3-ton trucks. Shipped out in large numbers complete or in CKD form, mainly for use in North African campaign and Land Lease program (1.700 3-ton Dodges were delivered to Russia).

Its only difference in appearance were right-hand-drive, form of cargo bed and wider 16-inch tyres. The 3t high-sided trucks series T110 (D60) equipped with 6-cylinder engine (3.9 l, 95 h.p.), single- and dual-tyre wheels with 16 or 20-inch diameter of rim seat. Series T110 was the best known in Europe.
It consisted of two basic models - T110L-6 (D60S) and T110L-9 (D60L) with 3.454mm or 4.064mm wheelbase respectively. They got 2-speed final drive, hydraulic brake actuation with vacuum booster, metal cargo bed with tent or dump body. These trucks were exported and/or produced to a number of allied countries, mainly the Commonwealth countries. 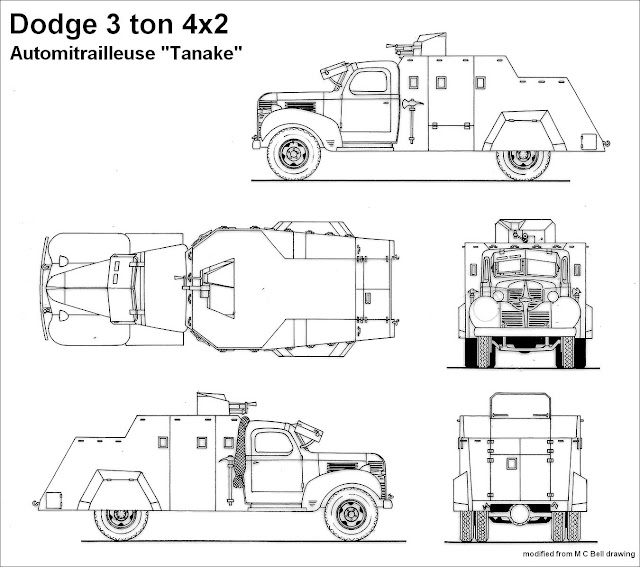 These trucks served with Foreign Legion units before the war, and both Vichy and Free French units during WWII. After the war, the trucks remaining in the country passed on to the Syrian government, and some were used during the 1948 war. The "Tanake" was fitted with a 37mm cannon M1916 and 2 or 3 FM 24/29 light machine guns and a crew of 5.

Dodge T-234 "China / Burma" truck
A special case in between stock commercial and dedicated military trucks, was the T-234 "China / Burma Road" truck, which was built as part of the Allied cooperation with China against Japan, in the war and just thereafter. From October 1944 through March 1946, Dodge built 15,000 trucks, that used a special order combination of their most heavy-duty off-the-shelf components, to overland supplies from India to China over the very rough Stilwell / Ledo Road, to an extent to specifications personally drawn up by Generalissimo Chiang Kai-shek, then commander of the Nationalist Chinese forces. Chiang Kai-shek asked Roosevelt himself for 15.000 two-and-a-half-ton trucks capable of handling the Burma Road, requiring them to have an engine of at least 300 cubic inches and a 5-speed transmission.
The trucks were built with a near standard civilian closed cab - right-hand drive because the British were in command of Burma - but fitted with a flat, military-style grille & brush guard, and wide open, almost flat fenders, to avoid mud build-up clogging the wheels rotating, and otherwise stood out by having a 227 liters fuel tank. In order for the trucks to function on the gruelling 7.520 km journey over the Himalayas.
Dodge fitted not only heavy-duty springs and steering gear, but went sofar as to fit tri-metal aircraft grade bearings and aeroplane-type shock absorbers. Radiators were fitted with an overflow tank, to return the cooled water to the sealed cooling system. The speed is limited to 65 km/h. Ground clearance was 33cm, with a 50° approach angle, and 28.5° departure. Front axles were widened to give wider tread. Nevertheless, the average life of the trucks was only about five trips. 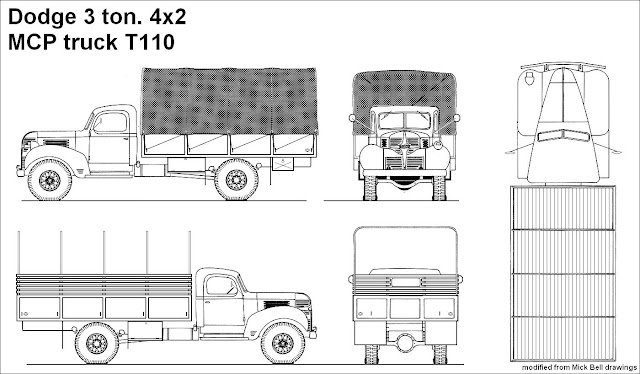 The kit:
For a change, there is no such beauty in injected plastic (meanwhile what-if kits and World of Tanks we found by the dozen ...), but fortunately there is a very rare kit, manufactured by Montex, in resin: Dodge WC203a.
But as I live far from everything and everyone, it was very difficult for me to achieve such beauty... Until I stumbled upon a kit that was offered to me by a colleague, partially started (the cabin ...) but intact, still that with some strange pieces ... but complete ... The box I received was this:

The two longitudinal stringers of the chassis were bent and one of them was1 mm shorter. After gluing the transversal stringers, I cut a portion of the chassis with a diamond disc from my Dremel and introduced a 1mm piece of plastic. It was just perfect !!!

I decided to build my Dodge in British colors, in the fine WWII frame. Because of that, I will have to perform some transformations... The wheels are the most important, with the British using simple 10.50x16 wheelsin the front and rear axles. And, fortunately, I have saved a complete set of those wheels, which were left over from the construction of the Otter Mark I Light Reconnaissance Car. As Lavoisier said: "In scale models, nothing is lost, everything is transformed!".

Now, we are going to complete the cabin, so that we can paint its interior and glue it to the chassis, to continue the work. The instrument panel and glove compartment can be built for the right or left driving position. As our vehicle will be British (by Jove!!), we will build the instrument panel according to the right steering pattern. The kit comes with a printed transparency to be glued to a piece of PE, which is the instrument panel. 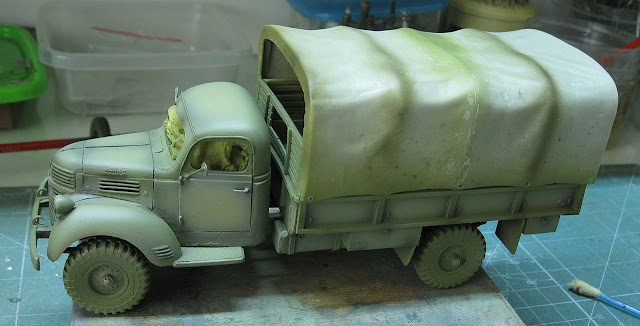 While the canvas dries and adapts, we go to historical research to situate our girl in time and space. My project was inspired by this photo: 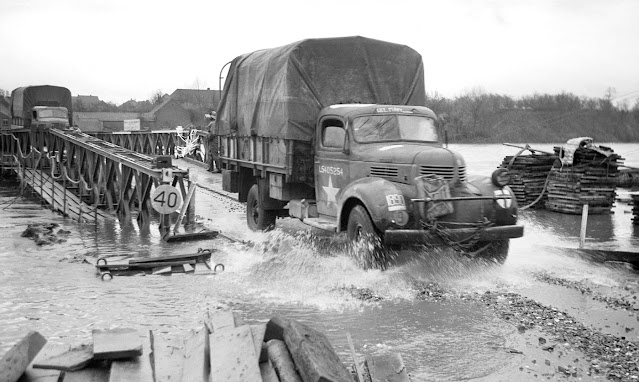 My goal IS NOT TO REPRODUCE THIS SPECIFIC TRUCK, but a truck from that unit, in this location and at that time ... Unfortunately, the specific Unit remains unidentified, but the truck belonged to the 2nd British Army, providing services to the Royal Army Service Corps (RASC) , parked in the Belgian city of Maaseik, on the River Mass, on the border with Holland, in November 1944. But let's see this photo more closely:
My girl will be like this: 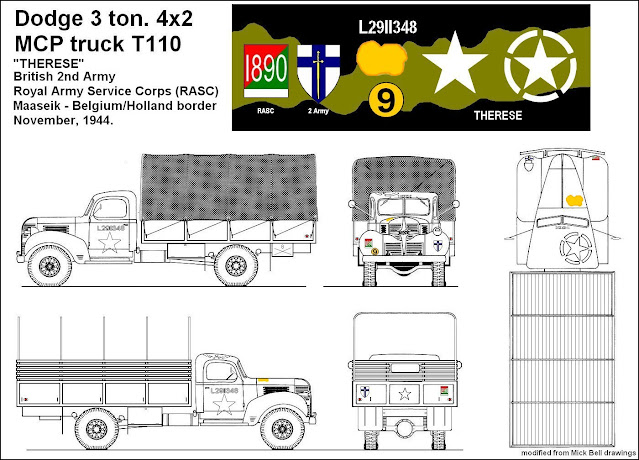 The Dodge girl after being painted with the Disruptive British Camouflage pattern and with the canvas painted and characterized in khaki tones.

And finally, the girl was ready. This is "THERESE", a Dodge 3 ton. MCP 4x2 T110 truck, with the markings of 2nd British Army, Royal Army Service Corps (RASC), in Maaseik, Belgium/Holland border, in November, 1944. 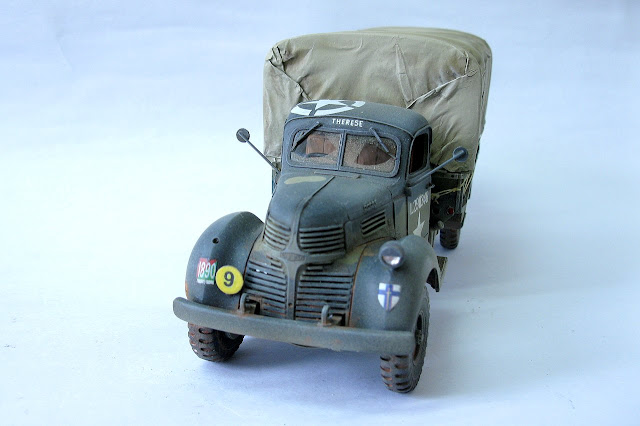 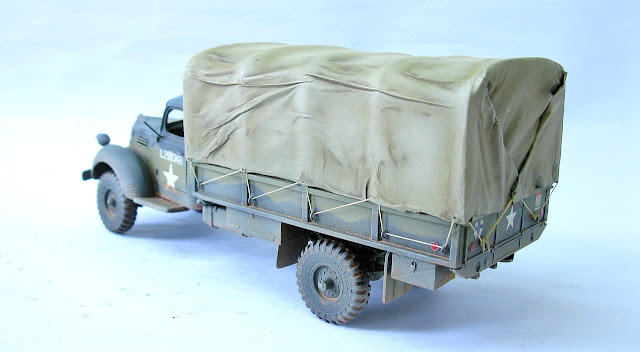 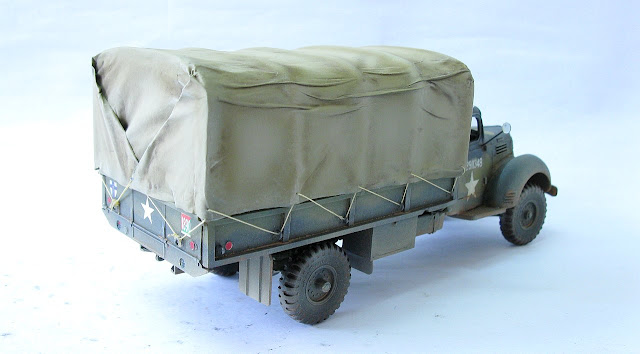 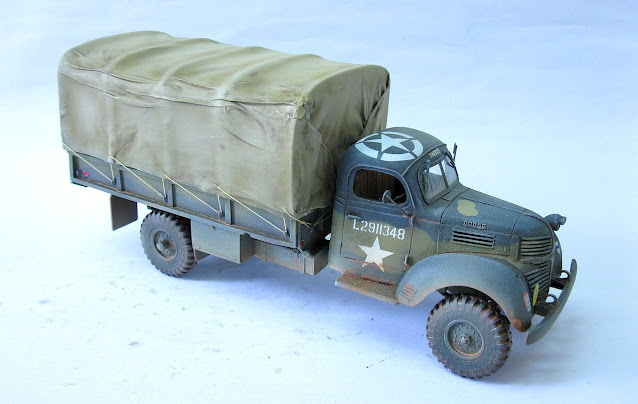 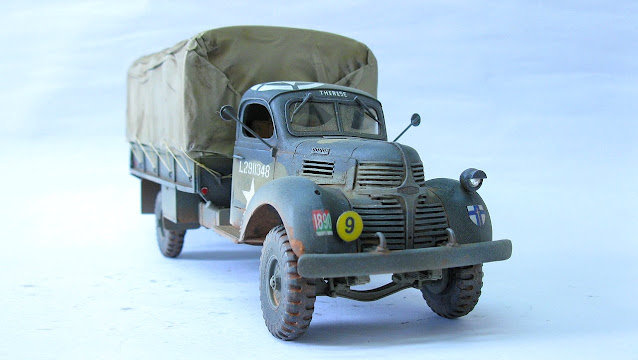