Lads !!!
Let's see this little girl with a funny name, product of the desperate days of the dawn of World War II, when Britain was in the imminence of a Nazi invasion: Beaverette Mk III!!!
History:
The Standard Car 4x2, or Car Armoured Light Standard, better known as the Beaverette, was a British armoured car produced during World War II.
The first version of the vehicle was built in 1940 by Standard Motor Company at the instigation of Lord Beaverbrook, then Minister of Aircraft Production (hence the name Beaverette).
It was based on commercial car chassis, on which a simple riveted armoured hull was mounted. The 11mm of steel was backed by 3 inch thick oak planks. The hull was open at the top and at the rear. The armament consisted of Bren light machine gun which could be fired through a slot in the glacis armour (Beaverette Mk I).


Subsequent versions received all-around protection and a machine gun turret - an enclosed one with Bren MG...


...or an open-topped one with twin Vickers K Mk I machine guns.
Some vehicles also carried Boys anti-tank rifles.

Some had No. 11 or No. 19 radio set. The production was stopped in 1942. About 2,800 units were delivered.
The Beaverette was used by the British Army and Royal Air Force for home defence service and training. The vehicle is said to have suffered from excessive weight and to be hard to handle. 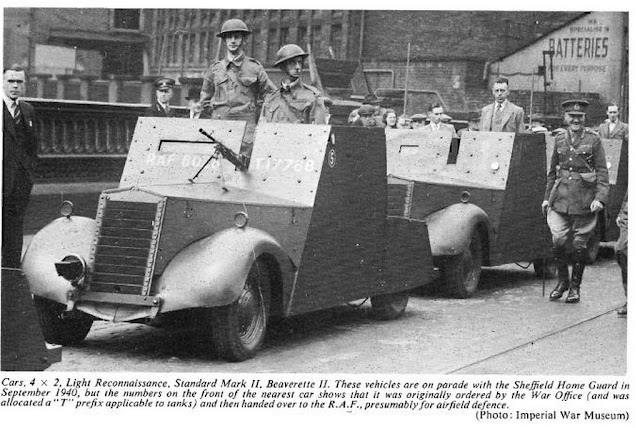 A similar vehicle, known as Beaverette (NZ), was produced in New Zealand Railways workshops, Hutt Valley. The car used a Ford 3/4 or 1-ton truck chassis and plate salvaged from the ships Port Bowen and Mokoia for armour. They had a crew of 4 and 208 units were built.

After the WWII, many Beaverettes continued to be used in several functions, like policing in risky areas:
...and other different duties;
Survivors:
A Mark III Beaverette is displayed at the Imperial War Museum Duxford.

Another Mark III is in the Cobbaton Combat Collection, a private collection of military vehicles in Umberleigh, Devon in the United Kingdom.
A Mark IV Beaverette is displayed at the Museum Bevrijdende Vleugels in the Netherlands. 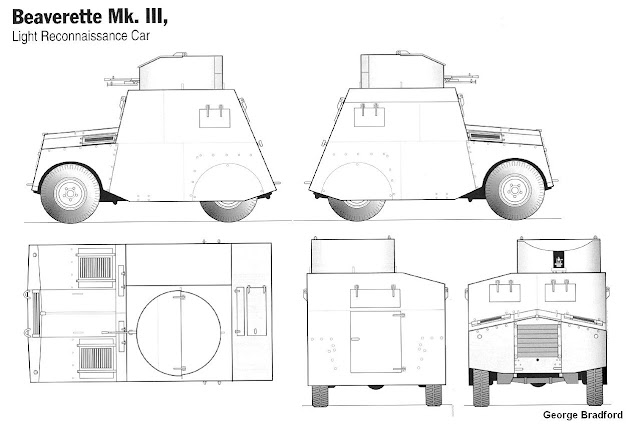 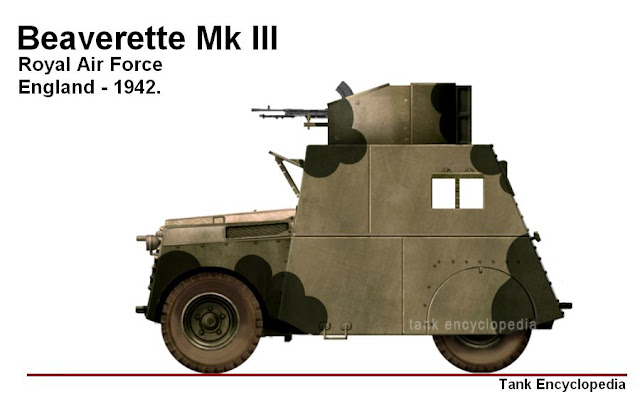 The kit:
I used the IMA Beavarette Mk III model kit in resin (IMA 00935). The kit comes packaged in an interesting rigid plastic box, nicely packed in styrofoam and bubbles-plastic.

I started by the wheels, strengthening the small shafts with dental acrylic, to prevent fractures...

Inspecting the kit, I found that the joints of the plates are recessed in the kit, but they are weld beads, in the original model. See the arrow, below:
The real thing:
Another mistake: the flat plane in the vehicle floor: 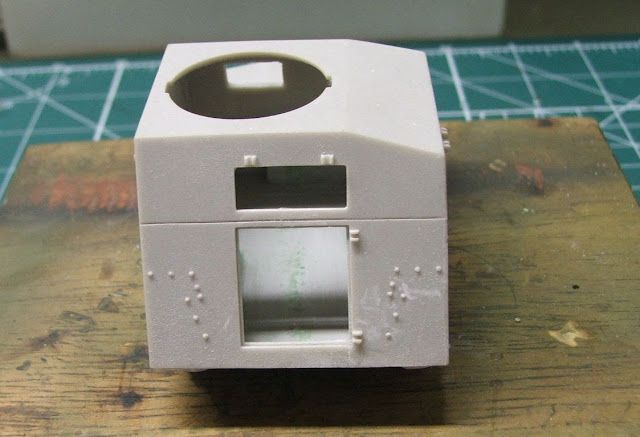 The correct is above: a box for the rear axle (red arrow). I'll have to do in scratch these and other details, such as the protector of the drive shaft and gearbox (green arrow), a fuel tank (blue arrow) and the turret structure (yellow arrow): 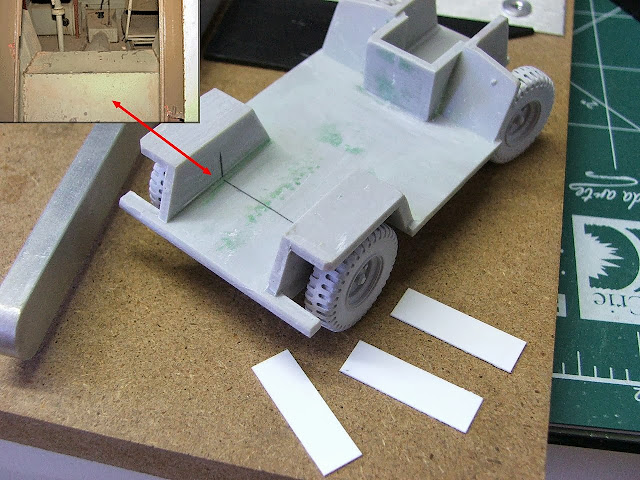 The front firewall is complete, closing the below area of the front hull: 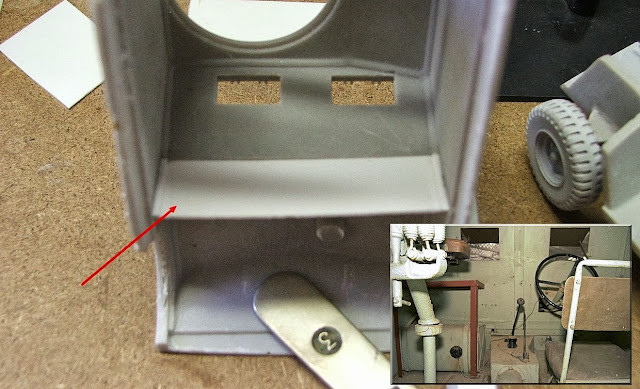 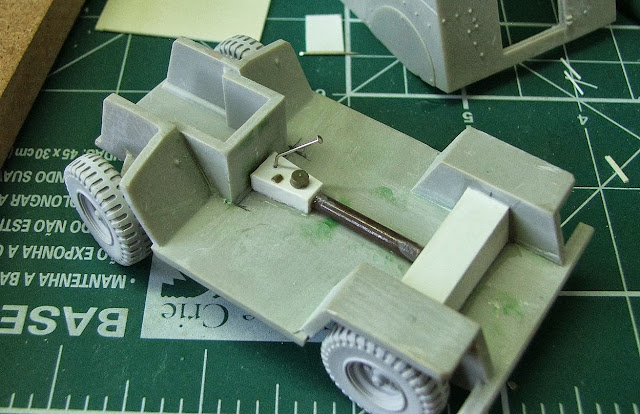 As the kit don't provides the gun, I'll use the Bren MG from Italeri:

And the girl ready for paint. Notice the weld beams make with sprue and eletronic welder. I think it's amazing an armoured car does not present a spare wheel.
I imagined a field adaptation to solve this flaw: a piece of metal and a welding apparatus to solve this fault .... 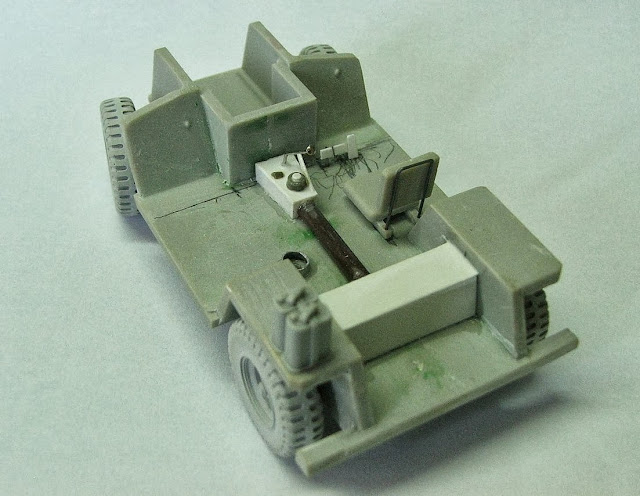 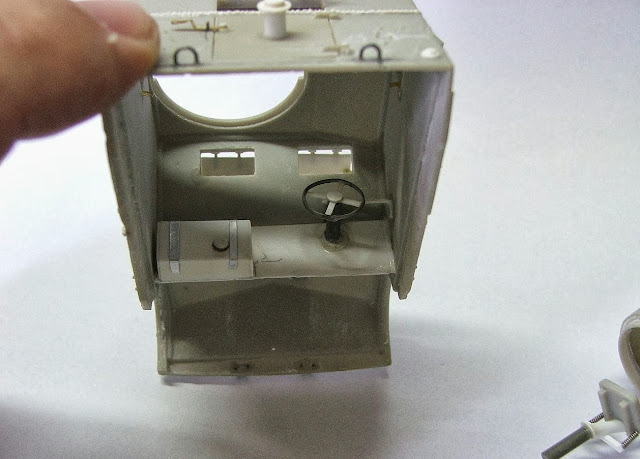 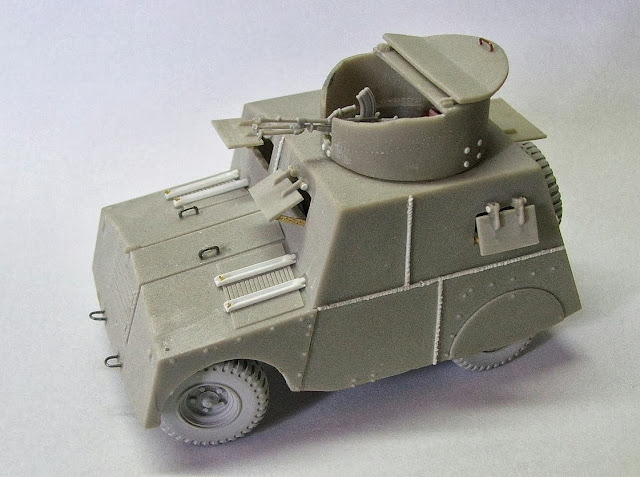 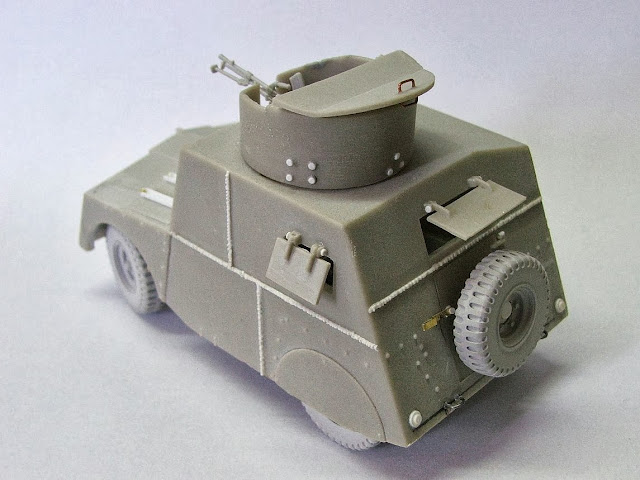 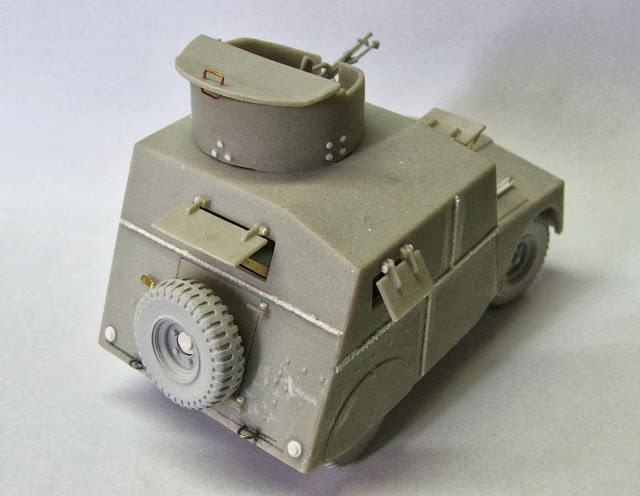 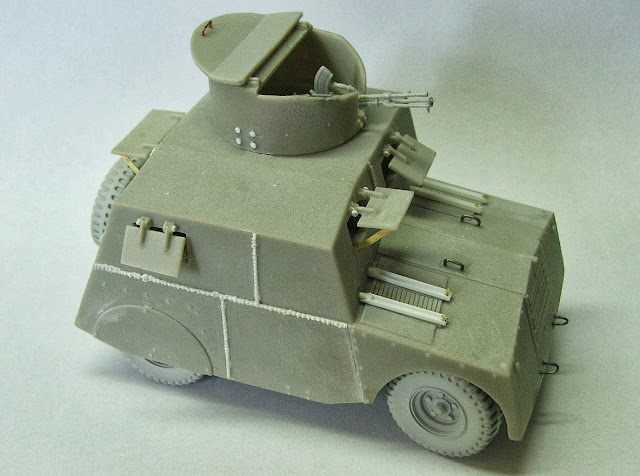 Continuing with the painting of Beaverette: First of all, primer.
I print the instruments for the Beaverette:
Next step, close the body... 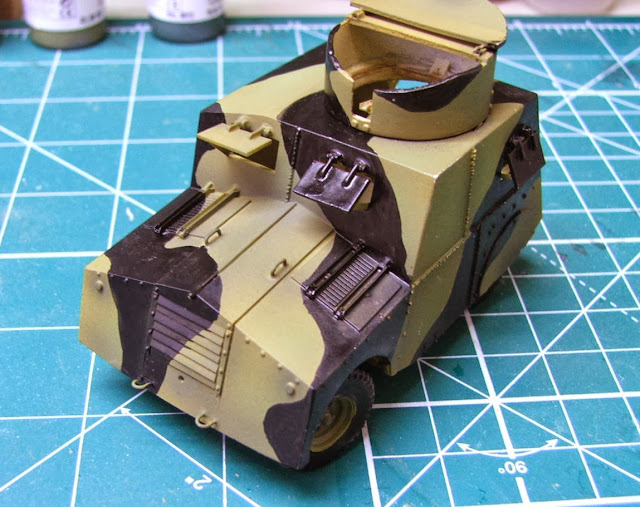 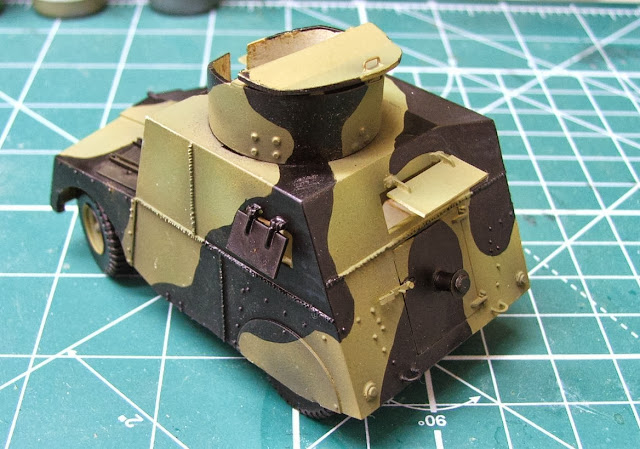 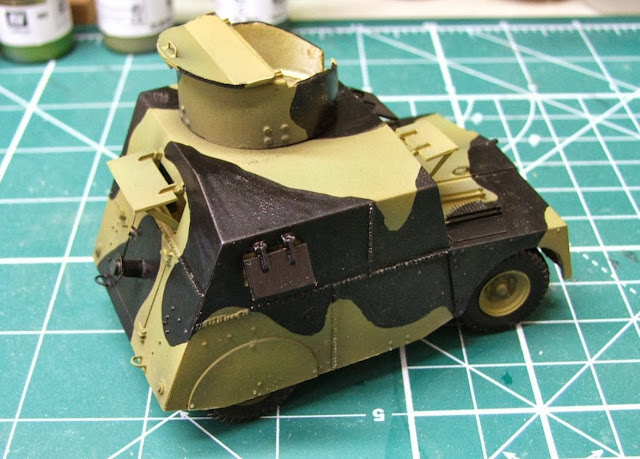 I applied a coat of Future,to prevent silvering in the decals... While the Future dried, I did the decals ...
And the little girl was ready... 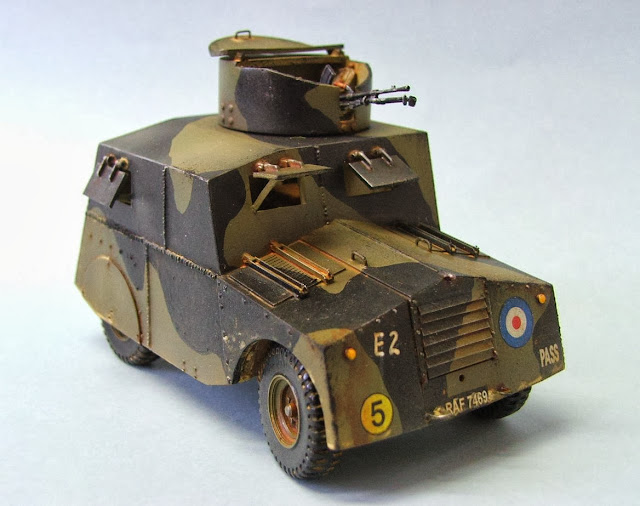 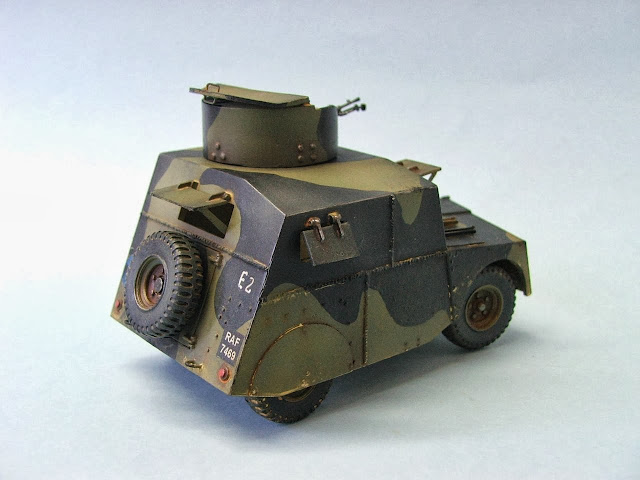 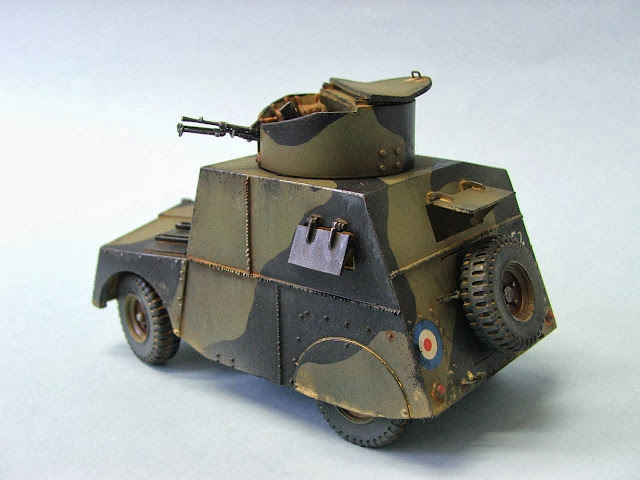 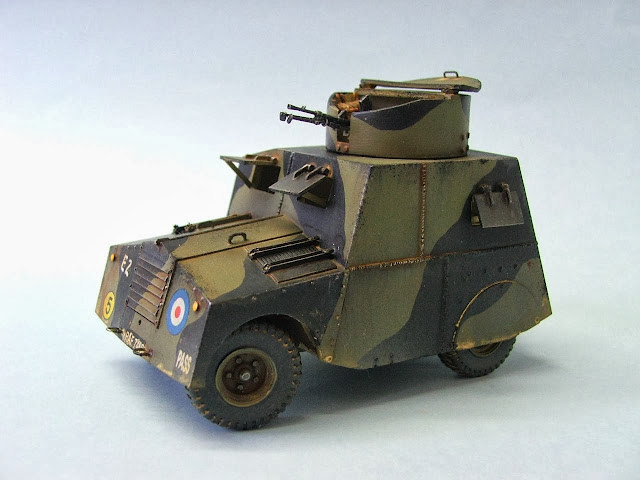 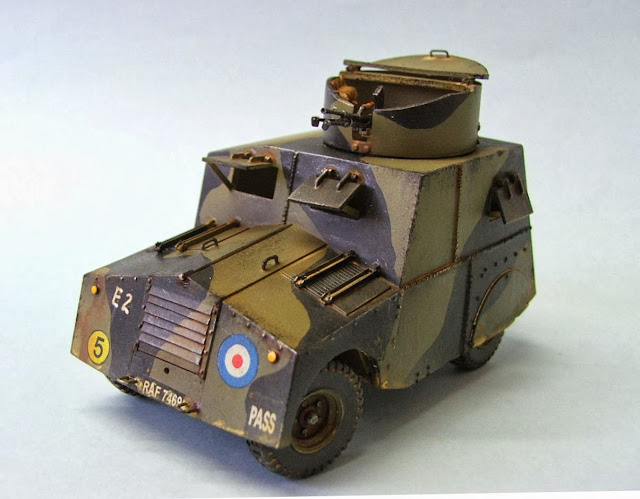 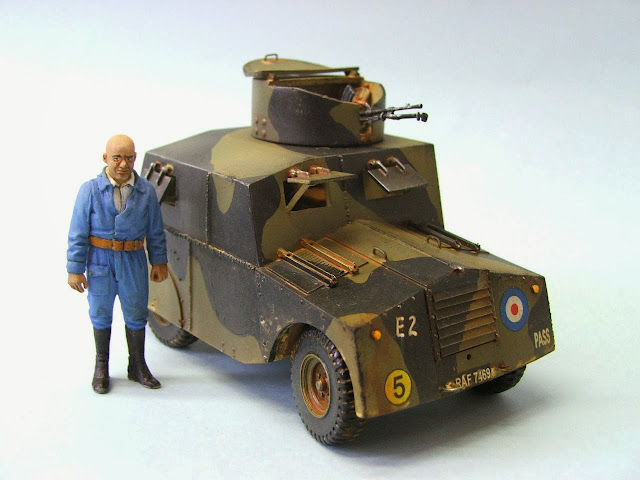 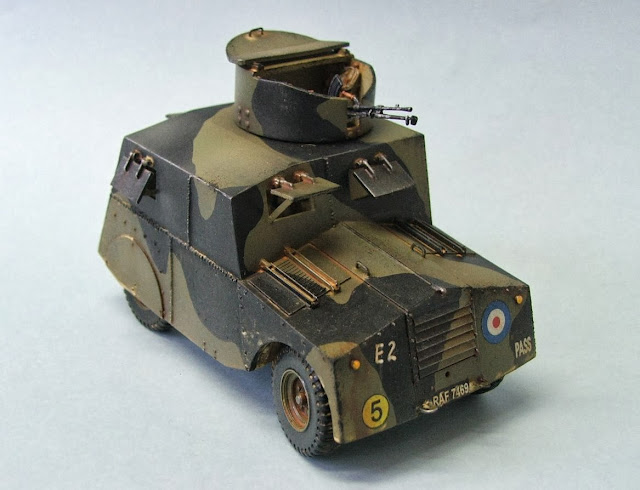