Gentlemen!!
You guys know that I love the building of rare vehicles, but real ...Strolling through the internet, last year I found this photo on the Axis History Forum and Bingo ... Here I come! ...
A Renault R-35 french light tank, with a conical turret T-26 russian tank, with german markings... Panzerkampfwagen 35R 731(f) mit T-26 turm... Wow!!!
To me, the photo was real, but then Photoshop exist, we no longer sure of anything. I asked in Missing Lynx what the colleagues thought about the image and the consensus was that the photo depicted a real vehicle, as was my opinion from the beginning. Well, this was the starting point for the collection kits to reproduce this project.
The use of captured material was very common by the Germans, especially for secondary duties, such as tractors, ammo carriers, observation or airfields guarding... The Germans had and used many tanks R35 under combat conditions, after the surrender of France. It was  reliable and robust, with good supply of spare parts. ... Many vehicles R-35 were transformed  in destroyers, with a Czech 47mm gun , the Panzerjager 35R 731(f).
In my interpretation, the Germans picked up a R-35 version tractor or ammo carrier (Munitionspanzer 35R 731 (f)) with no turret and put a T-26 turret in it for crew protection, using the tank as an armored observation vehicle.

After this introduction, we will start the project. First, I "cleaned" the picture for best viewing:
A drawing in three views is always important: 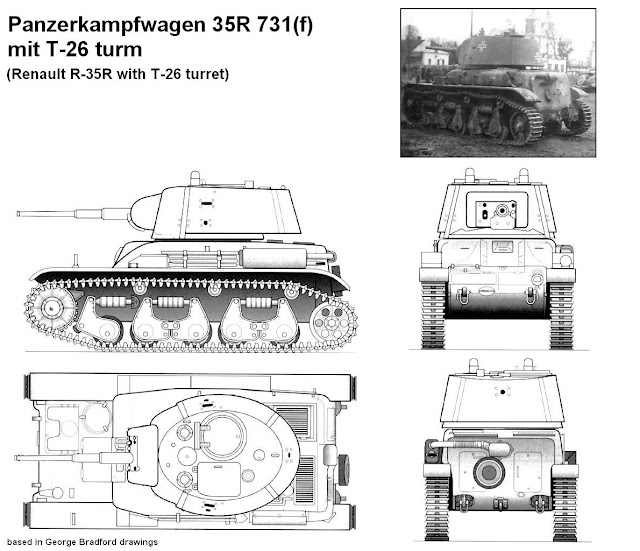 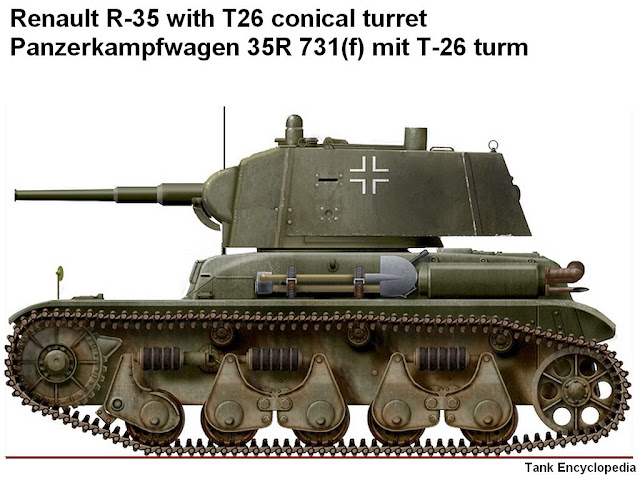 After presenting the project, let the protagonists: I'll use an old Heller kit for the hull of the R-35 and a Mirage kit  of T26-C.
The Heller kit is good and honest, but the injection of Mirage's kit is a shame ... Look at the injection fault in the breech of the 45mm gun: awful!! ... I'll replace it with a metal gun from RB Models.

After the metal gun surgery, the T26 turret is taking shape..


I made an adjustment to allow for the rotation of the turret on the hull. In my opinion, in the original tank the turret should be welded ... Its function should not be firing, but just a "cover" to protect the inside of the hull exposed. The advantage of being mobile turret in the kit is to prevent fracture of the gun, when handling the model ...
Testing the turret in the upper-hull. Ok !!!
The building continues...Suspension and turret:
I change the front axle (plastic) by a metal one:
Making the tracks sagging: 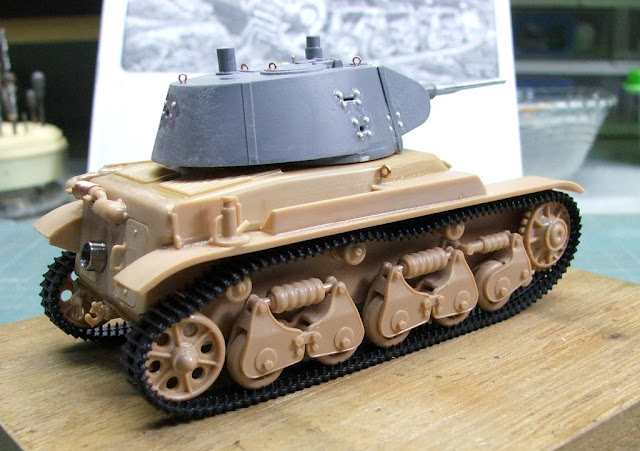 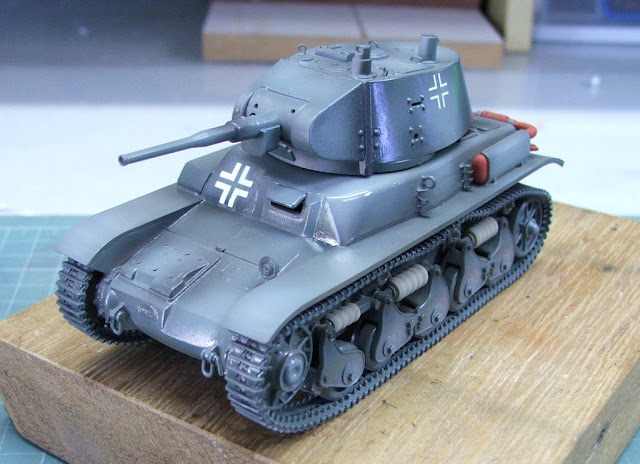 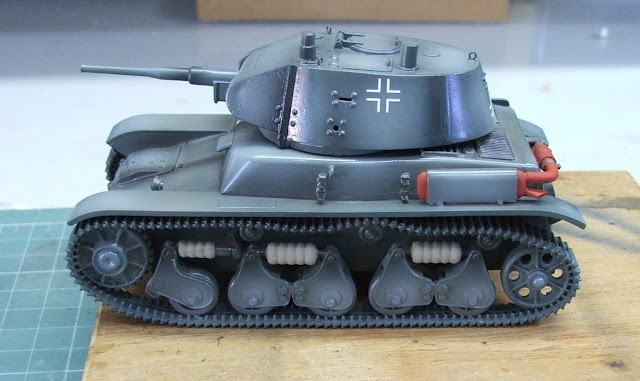 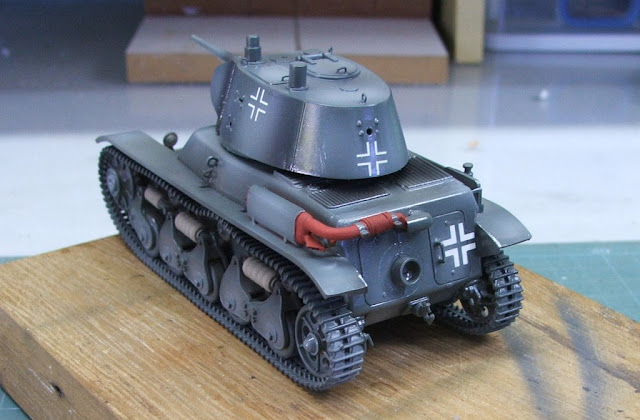 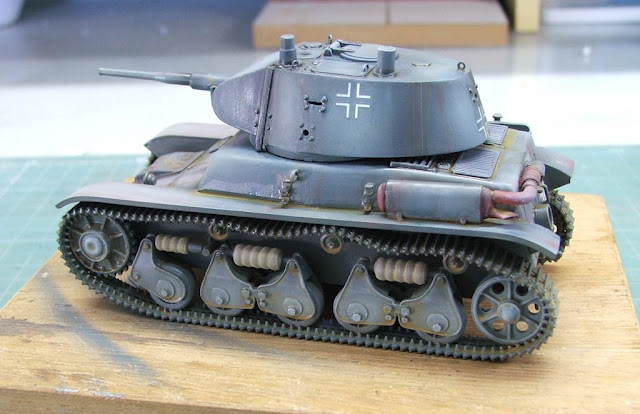 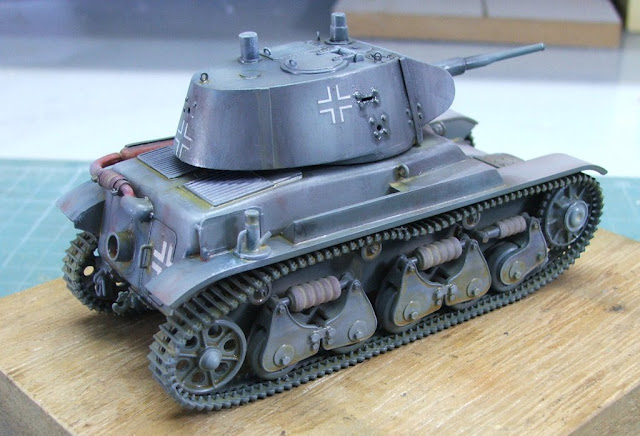 In the last post of this blog, this captured girl  was ready to receive the final weathering...
Well, after publishing the building in Missing-Lynx, our colleague Zisis Tsagarakis ( Thanks, Zisis...) drew my attention to a small BIG detail: the turret that I used was wrong. The mantlet was from another model, like in the plant I drew ...
Putz ... Here's a detail that could not be left behind ... How I don't have this version of turret, the way was do a surgery:
And the turret was corrected:
And, finnaly (after the scare...), the French-Russian-German girl was done: 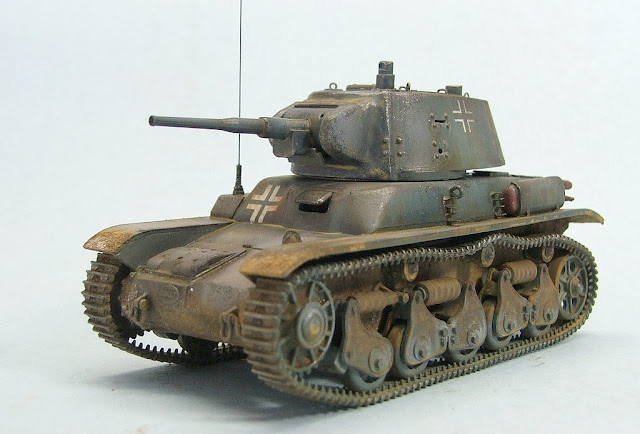 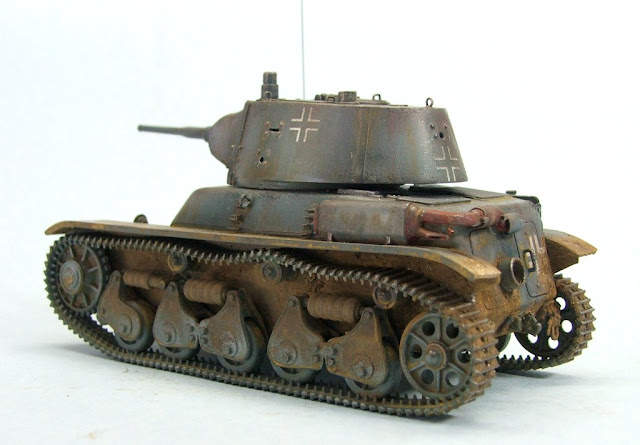 Well, Gents ...
Another project based on actual photo was ready ... It is very nice to have a unique model in our collection, even more when he receives help from colleagues around the world.  Cheers !!

Everyone knows the British Grant CDL, one of the Hobbart's Funnies from 79th Armoured Division:
But his American brother is a little less known. The British version used the chassis of M3 Grant. The American version used the chassis of the M3A1 Lee with cast hull.
History:
The M3A1 Lee cast hull were only used in training by the United States and the only version of this hull that saw combat was just the version CDL. Similar to the English version, the turret with 37mm gun was removed and was installed a turret with a searchlight inside, keeping the 75mm gun on the hull, maintaining the main offensive capacity. In the American version, it used the hull M3A1 early and late, with heavy-duty suspension, like the M4 and the aft hatch of the hull with opening back, characteristic of the final versions of Lee hull cast. The hatch of side of the hull could be present or not.
The American turret CDL was different in small details regarding to the British, such as replacement of the Besa machinegun by a .30 Browning, as well as the use of Americans periscopes.
The Americans M3 Lee CDL were called Leaflet Tractor T10, in an attempt to disguise their true mission. All CDL tanks program was surrounded by much secrecy. The secret was so much that detracted from its use by the allied forces.
The men who manned the tanks T10 CDL called their tanks as Gizmo Tank. Served in Medium Tank Battalions 701, 736, 738, 739, 740 and 748. In 1945 were used for illumination and distraction duties during the crossing of the Rhine. 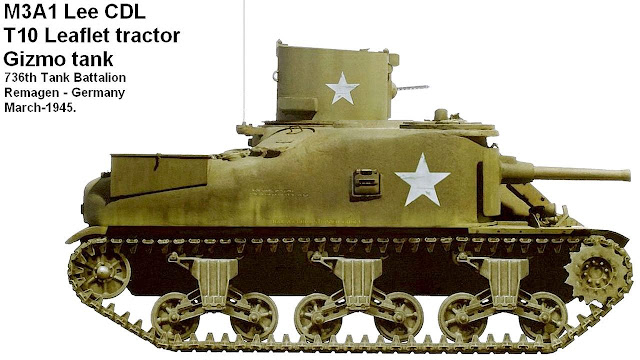 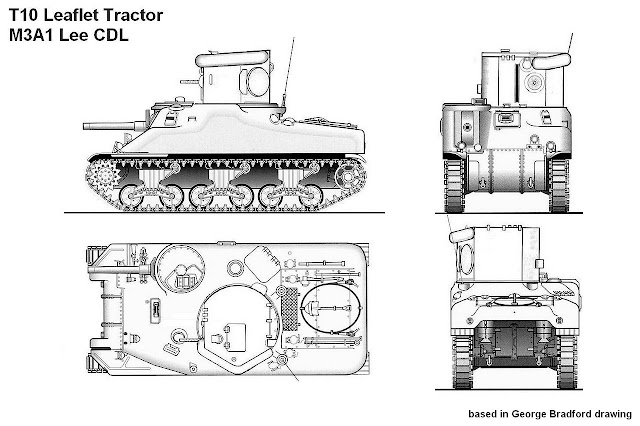 The kit:
To the building of this kit, I'll use the excellent M3A1cast hull from Formations, which acquired with a colleague. The hull will be transformed in the late version, like the profile above, with the removal of the side hatches of the hull and the inversion of the roof hatch. The Formations hull is the early version.

The material manufactured by Formations is simply fantastic. For removing the side hatch of the hull, I sanded the region and the late version was ready.
Notice the capped holes in the front hull for machine guns, that no had in late version. The hinges of the roof hatch are still there, in this photo ... but have been removed and rebuilt in its new position
Although Formations recommend for this conversion kit  the Lee/Grant from Academy, I will use as "host" kit the old Tamiya Lee. I will use several parts for the project. The heavy duty suspension will be a scrap of an Italeri Sherman that I have in my"Bowl of Souls" ...
The "Frankenleestein" is growing...

The kit with the first primer layer. Notice the "armour collar" that I did in the hull, to protect the joint hull-turret. This collar is typical of late versions ...


I added ceiling fans and periscopes in the top of the hull. These parts was molded from a M4 Sherman hull and reproduced with dental acrylic.

The amazing Archer casting marks I always use after the primer.
Kit painted with Olive Drab, with tonal variations of this color. The Shermie is next, for size comparison. The glowing effect is the result of applying Future to avoid silvering on decals
TheLeaflet is already looking like a tank ...


Decals applied. "Lightning" seemed like a good name for a "illuminator tank ".
And side by side with his British brother, by St. George!!
And the build this CDL beast is over...
The Formations hull is very, very good !!! The final pics: 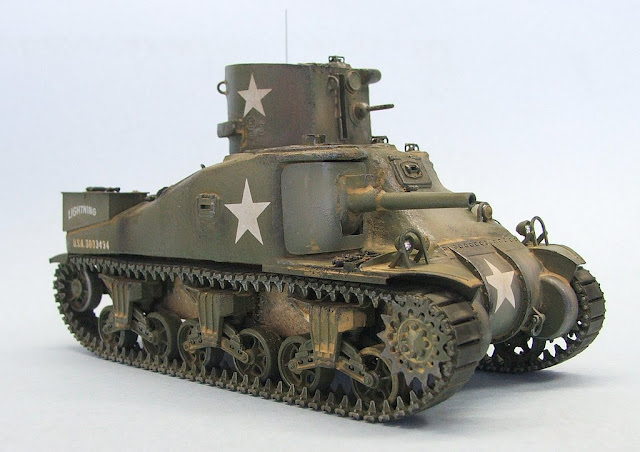 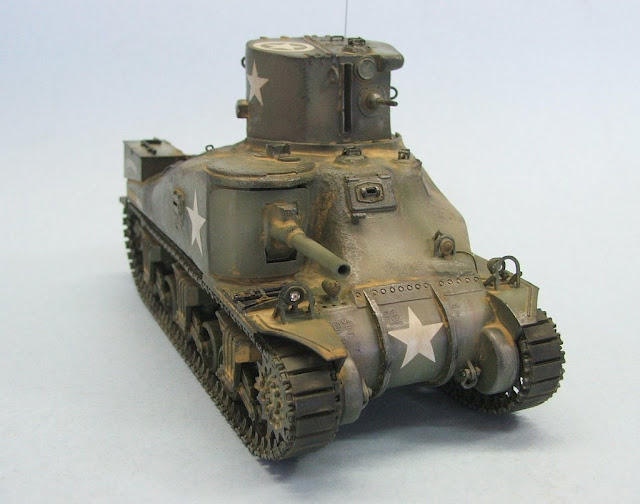 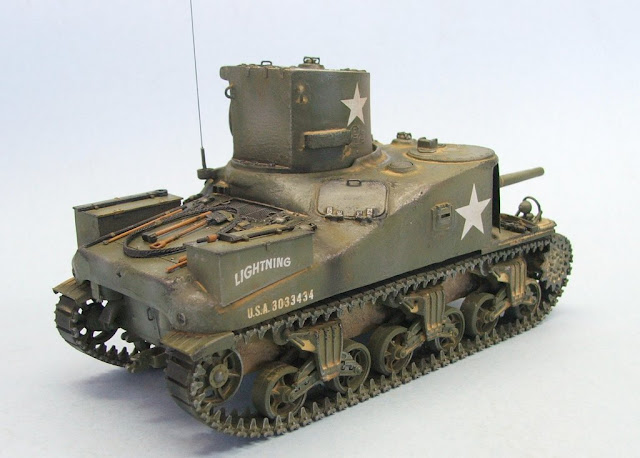