On May, 25 and 26, 2013 there will be a Practical Course of Painting Figures Technics with the great Spanish Master Julio Cabos.
The workshop will be held in Porto Alegre, capital of Rio Grande do Sul state, with 25 participants. The students will dive into the fantastic techniques of this great artist. The event is responsibility of our fellow modeler Fabricio Fay.
And I'll be there, please the Gods!

Let's see if I can improve my painting figures techniques ...If I can't, I guarantee you it won't be the teacher's fault, but this bad student's !!!
Keep you guys informed ...

And if someone wants to join us, there is still a last open slot in the event!!
See here: http://losfigureros.blogspot.com.br


Today, I'll show to you guys a model from 2011. A very simple kit, but rare and in my opinion, beautiful: One Jeep, in ambulance version, used by the Brazilians in Italy (1944-45), in the  Brazilian Expeditionary Force (FEB).
History:

The Willys MB US Army Jeep (formally the Truck, 1/4 ton, 4x4) and the Ford GPW were manufactured from 1941 to 1945. These small four-wheel drive utility vehicles are considered the iconic World War II Jeep, and inspired many similar light utility vehicles.
Over the years, the World War II Jeep later evolved into the "CJ" civilian Jeep. Its counterpart in the German army was the Volkswagen Kübelwagen first prototyped in 1938, also based on a small automobile, but which used an air-cooled engine and lacked 4 wheel drive.
Even though the world had seen widespread mechanisation of the military during World War I, and the US Army had already used 4x4 trucks in it, supplied by the Four Wheel Drive Auto Co. (FWD), by the time World War II was dawning, the United States Department of War were still seeking a light, cross-country reconnaissance vehicle.
The tensions were heightening around the world in the late 1930s, the U.S. Army asked American automobile manufacturers to tender suggestions to replace its existing, aging light motor vehicles, mostly motorcycles and sidecars but also some Ford Model Ts.
This resulted in several prototypes being presented to army officials, such as five Marmon-Herrington 4x4 Fords in 1937, and three Austin roadsters by American Bantam in 1938 (Fowler, 1993). However, the US Army's requirements were not formalized until July 11, 1940, when 135 U.S. automotive manufacturers were approached to submit a design conforming to the army's specifications for a vehicle the World War II technical manual TM 9-803 described as "... a general purpose, personnel, or cargo carrier especially adaptable for reconnaissance or command, and designated as 1/4-ton 4x4 Truck."
By now the war was under way in Europe, so the Army's need was urgent and demanding. Bids were to be received by July 22, a span of just eleven days. Manufacturers were given 49 days to submit their first prototype and 75 days for completion of 70 test vehicles. The Army's Ordnance Technical Committee specifications were equally demanding: the vehicle would be four-wheel drive, have a crew of three on a wheelbase of no more than 1,90 (later 2,0) meters and tracks no more than 1,20m, feature a fold-down windshield, 300 Kg payload and be powered by an engine capable of 11,7 Kgf m (115 N·m) of torque. The most daunting demand, however, was an empty weight of no more than 590 kg.
Only two companies entered: American Bantam Car Company and Willys-Overland Motors. Though Willys-Overland was the low bidder, Bantam received the bid, being the only company committing to deliver a pilot model in 49 days and production examples in 75. Under the leadership of designer Karl Probst, Bantam built their first prototype, dubbed the "Blitz Buggy" (and in retrospect "Old Number One"), and delivered it to the Army vehicle test center at Camp Holabird, Maryland on September 23, 1940.
This presented Army officials with the first of what eventually evolved into theWorld War II U.S. Army Jeeps: the Willys MB and Ford GPW. Since Bantam did not have the production capacity or fiscal stability to deliver on the scale needed by the War Department, the other two bidders, Ford and Willys, were encouraged to complete their own pilot models for testing. The contract for the new reconnaissance car was to be determined by trials. As testing of the Bantam prototype took place from September 27 to October 16, Ford and Willys technical representatives present at Holabird were given ample opportunity to study the vehicle's performance. Moreover, in order to expedite production, the War Department forwarded the Bantam blueprints to Ford and Willys, claiming the government owned the design. Bantam did not dispute this move due to its precarious financial situation. By November 1940, Ford and Willys each submitted prototypes to compete with the Bantam in the Army's trials.
The pilot models, the Willys Quad and the Ford Pygmy, turned out very similar to each other and were joined in testing by Bantam's entry, now evolved into a Mark II called the BRC 60. 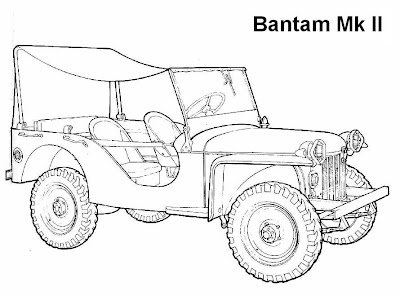 By then the U.S. and its armed forces were already under such pressure that all three cars were declared acceptable and orders for 1,500 units per company were given for field testing. At this time it was acknowledged the original weight limit (which Bantam had ignored) was unrealistic, and it was raised to 980 kg.  For these respective pre-production runs, each vehicle received revisions and a new name. Bantam's became the BRC 40, and the company ceased motor vehicle production after the last one was built in December 1941.
After reducing the vehicle's weight by 109 kgs, Willys' changed the designation to "MA" for "Military" model "A".
The Fords went into production as "GP", with "G" for a "Government" type contract and "P" commonly used by Ford to designate any passenger car with a wheelbase of 2,0 m.

By July 1941, the War Department desired to standardize and decided to select a single manufacturer to supply them with the next order for another 16,000 vehicles. Willys won the contract mostly due to its more powerful engine (the "Go Devil") which soldiers raved about, and its lower cost and silhouette. The design features the Bantam and Ford entries had which were an improvement over Willys' were then incorporated into the Willys car, moving it from an "A" designation to "B", thus the "MB" nomenclature. Most notable was a flat wide hood, adapted from Ford GP.
By October 1941, it became apparent Willys-Overland could not keep up with production demand and Ford was contracted to produce them as well. The Ford car was then designated GPW, with the "W" referring to the "Willys" licensed design. During World War II, Willys produced 363,000 Jeeps and Ford some 280,000. Approximately 51,000 were exported to the U.S.S.R. under the Lend-Lease program.
A further 13,000 (roughly) amphibian jeeps were built by Ford under the name GPA (nicknamed 'Seep' for Sea Jeep).
Inspired by the larger DUKW, the vehicle was produced too quickly and proved to be too heavy, too unwieldy, and of insufficient freeboard. In spite of participating successfully in the Sicily landings (July 1943) most GPAs were routed to the U.S.S.R. under the Lend-Lease program. The Soviets were sufficiently pleased with its ability to cross rivers to develop their own version of it after the war (GAZ-46).

Origin of the term "jeep"
One account of the origin of the term "jeep" begins when the prototypes were being proven at military bases. The term "jeep" was used by Army mechanics for any untried or untested vehicles. Another likely factor in the popularization of the jeep name came from the fact that the vehicle made quite an impression on soldiers at the time, so much so that they informally named it after Eugene the Jeep, a character in the Popeye cartoons created by E. C. Segar. Eugene the Jeep was Popeye's "jungle pet" and was "small, able to move between dimensions and could solve seemingly impossible problems."
In early 1941, Willys-Overland staged a press event in Washington, D.C., having the car demonstrate its prowess by driving up the Capitol steps. Irving "Red" Hausmann, a test driver on the Willys development team who had accompanied the car for its testing at Camp Holabird, had heard soldiers there referring to it as a jeep. He was enlisted to go to the event and give a demonstration ride to a group of dignitaries, including Katherine Hillyer, a reporter for the Washington Daily News.
When asked by the reporter, Hausmann too called it a Jeep. Hillyer's article appeared in the newspaper on February 20, 1941, with a photo showing a jeep going up the Capitol steps and a caption including the term 'jeep'. This is believed to be the most likely cause of the term being fixed in public awareness. Even though Hausmann did not create or invent the word Jeep, he very well could be the one most responsible for its first news media usage.
Willys made its first 25,000 MB Jeeps with a welded flat iron "slat" radiator grille. It was Ford who first designed and implemented the now familiar and distinctive stamped, slotted steel grille into its cars, which was lighter, used fewer resources, and was less costly to produce. Along with many other design features innovated by Ford, this was adopted by Willys and implemented into the standard World War II Jeep by April 1942.


Military Jeep Ambulances
Even before the jeep went into standardized production in 1941, the prototypes were tested as litter carriers.
Throughout its history the jeep has been effectively used to evacuate casualties from the front or to move within base or field hospital areas when ambulance trucks were not available. While there was no special production jeeps for this use in the Willys MB or Ford GPW line, the jeep was frequently used this way in World War II and in Korea. Thereafter, newer models of the jeep (M38A1 and M151) did have special ambulance configurations. In Korea, and more so in Vietnam, helicopters took over much of the front-line evacuation vehicle role.
font:http://olive-drab.com/idphoto/id_photos_jeep_ambulance.php
The vast majority of Jeep ambulances were field adaptations. The holders of stretchers varied to infinity. 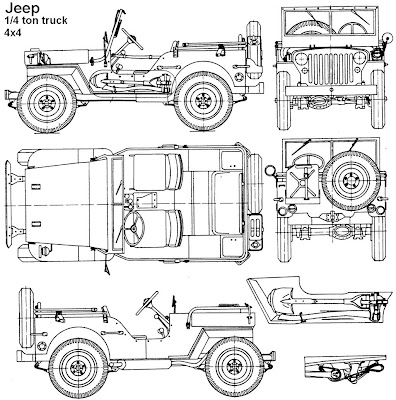 To do this medical vehicle, I used a very old Italeri kit (nº 326) Ambulance Jeep:
I bought my kit from a colleague (a real bargain). The Jeep was a bag-kit (no box) and was in good aspect.
My goal was to build a Brazilian Jeep, in ambulance version, used in Italy, 1944, with the colors of Brazilian Expeditionary Force. The actual photo:
Let's have fun. Starting by the Jeep's body. My kit was warped in the windshield base....Putty time:
The body and wheels... 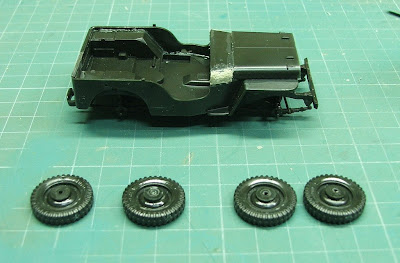 I replaced the Italeri wheels by resin wheels from Electric Product. Very better and with chains

But the stretchers were awful !!!

I decided to make the stretchers with metal rods and tracing-paper ...I wore the metal rods in my mini-lathe
Painting time: Olive-drab 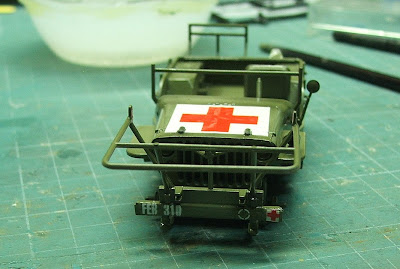 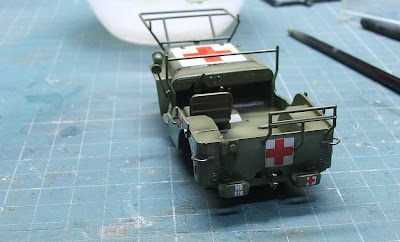 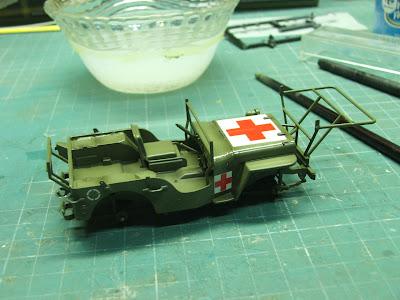 And the Girl was ready: Notice the MVLenses in the Jeep... 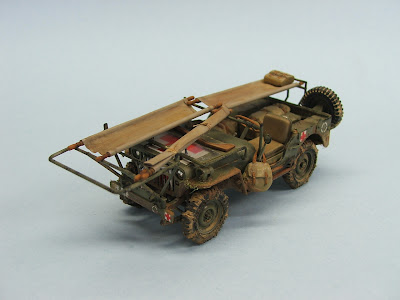 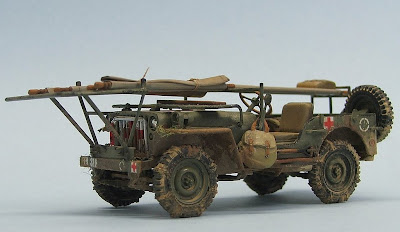 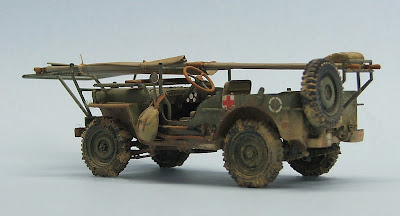 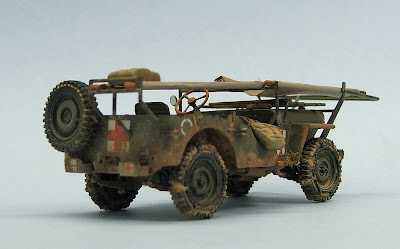 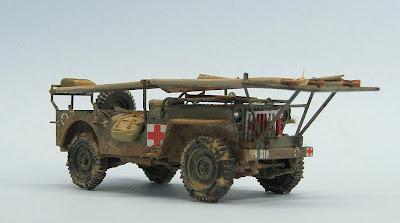 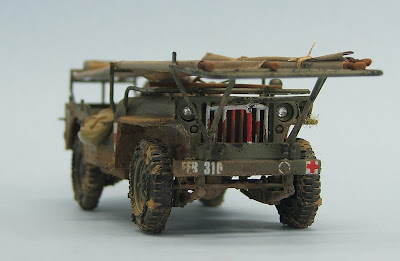 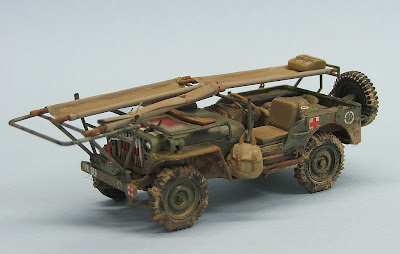 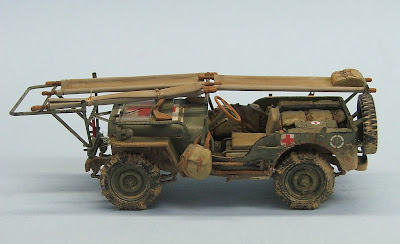 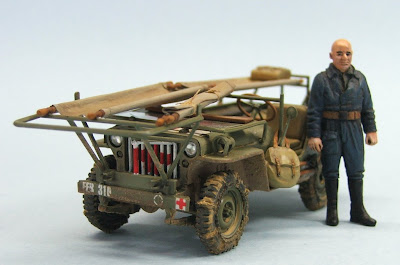