Let's revisit this classic subject of Russian military forces. As characteristic of the Soviets as Vodka,"Rasputitsa" or "General Winter"... Let's see again the Studebaker US6 U-4 6x6 truck, performing his patriotic duty as an artillery tractor, towing the 100mm BS-3 multi-purpose gun, in the final days of the Great Patriotic War!!!   For Motherland!!! 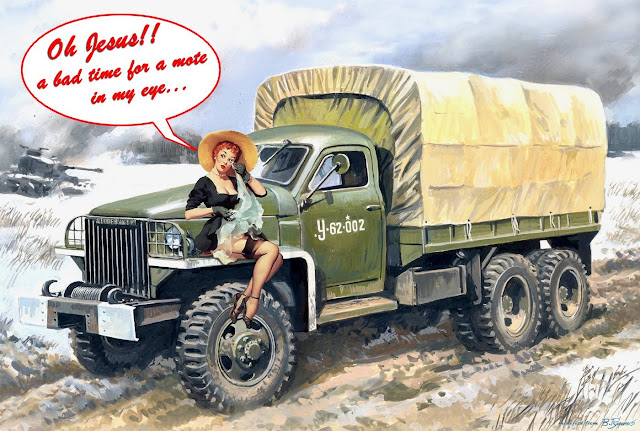 History of Studebaker US6 U-3:
The Studebaker US6 (M16A) is a class of 2.5-ton trucks manufactured by Studebaker during World War II, produced in the United States from 1941-1945 and in the Soviet Union beginning in 1942.
The US6 had a Hercules JXD built six-cylinder gasoline engine that produced 94 horsepower (70 kW), at  2.400 rpm, with a five-speed transmission plus a two speed transfer case.
The Soviet Union received almost all of the 105.000 trucks from production model 6x6 as well as most of the 90.000 6x4 produced, becoming the symbol of  Lend & Lease law. In Russia, the Studebakers were known as "Studer". They were extremely popular, due to its robustness, ability to receive loads beyond those provided and the ability to "digest" any type of gasoline.
The most significant chapter in the US6 combat history was service in the Red Army. The first "Studers” arrived in the USSR in January 1942. These were cars from the British contract DA-W-398-QM-6 with a single right headlight, including the U2 and U5 modifications.
In just the first year, the People's Commissariat of Defense received approximately 3800 vehicles. Truly large-scale deliveries began in 1943 and continued until the end of the war.
Large numbers of Lend-Lease Studebaker trucks were sent into the Soviet Union via the Persian Corridor. The Soviets found them a good platform for "Stalin Organ" Katyusha rocket launchers, although it was not their prime use in the Soviet Union.
It fulfilled many roles in the Red Army, such as artillery tractor and was renowned (and loved...) for its ruggedness and reliability. This adoration can be measured by the video below, in Russian (but with English subtitles)
The truck came in 13 variations, such as 6x6, 6x4, with short (3759mm - 148in.),  long (4115mm - 162in.) wheelbase, with and w/o winch, as cargo and dump truck.

Studebaker US6 trucks were also used in the construction of the Burma Road as well as the Alcan Highway in North America.
If you want to know a lot more about Studebakers and their variants, take a look at this more complete article here, on Panzerserra Bunker.
Specs: 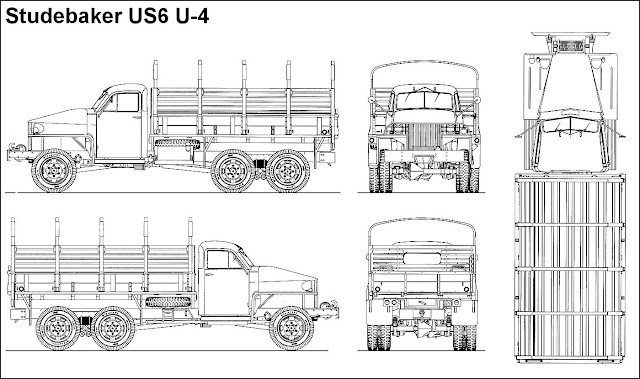 History of BS-3 100mm soviet field gun:
The 100 mm field gun M1944 (BS-3) (Russian: 100-мм полевая пушка обр. 1944 г. (БС-3)) was a Soviet 100mm anti-tank and field gun.
The gun was successfully employed in the late stages of World War II, and remained in service into the 1950s, being replaced in Soviet service by the 100mm T-12 antitank gun and the 85mm antitank gun D-48 in 1955.
The BS-3 was also sold to a number of other countries and in some of these countries the gun is still in service.  The development team was led by Colonel General V. G. Grabin.
A number of BS-3 pieces are still stored in Russian Ground Forces arsenals. Also, in 2012, at least 12 BS-3 guns are active with the 18th Machine Gun Artillery Division, located on the Kuril Islands, used as anti-ship and anti-landing guns. The BS-3 was based on the B-34 naval gun.
The gun was employed by light artillery brigades of tank armies (20 pieces along with 48 76,2mm ZiS-3 field gun) and by corps artillery.
In the Second World War the BS-3 was successfully used as a powerful anti-tank gun .In March 1944, the first battery of four experimental BS-3 guns was fired off at the Rzhev training ground, and from April 15 to May 2, 1944, by order of the Chief Marshal of Artillery they provided for full-scale shooting at captured equipment: a heavy tank Tiger B and a tank destroyer Ferdinand/Elefant. During the tests, the following results were obtained: from a distance of 2000 m, the armor-piercing projectile confidently penetrated the Tiger's frontal armor.
On May 7, 1944, by the decree of the State Defense Committee (GKO) No. 5822, the BS-3 gun was adopted by the Red Army. She became the first and only towed 100mm rifled cannon, created mainly to fight the heavy German tanks Tiger and Panther,  including the newest, heavier tanks Tiger Ausf B.
The gun was also used as a field gun. Though in this role it was less powerful than the 122mm A-19, as it fired a smaller round, the BS-3 was more mobile and had a higher rate of fire.
Serial production of guns began at the Bolshevik Artillery Plant number 7 in May 1944 (275 guns were manufactured by the end of the year), later by the Arsenal plant of Leningrad, too.
The new guns had their baptism of fire in the battles near Lake Balaton, and they were also used in the capture of Berlin.
Ammunition:
Projectile weight:

Armour penetration: (BR-412B -30°)
After the end of the war, BS-3 was in service with the Soviet Army for a long time, served as the basis for the creation of a family of powerful anti-tank guns, which are currently used in the Russian Armed Forces.
Specs: 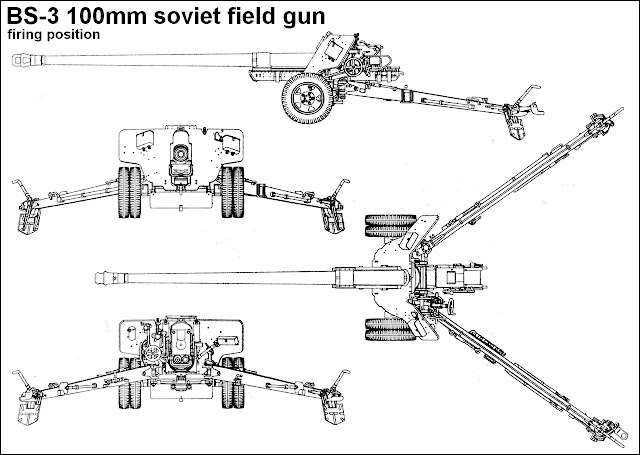 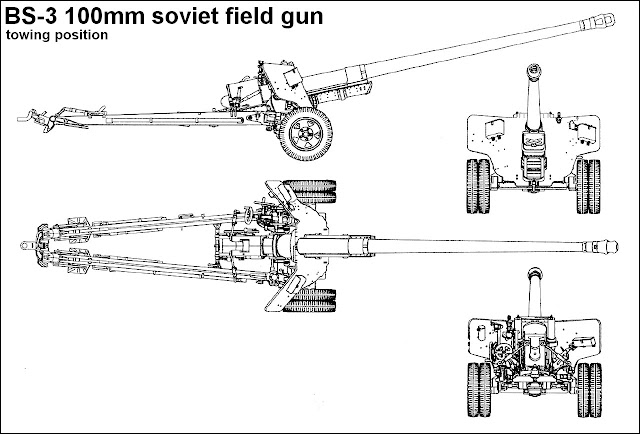 The project:
My client requested a specific project: that of a 6x6 Studebaker US-6 truck working as a Red Army artillery tractor, pulling a powerful Russian gun. I found these historical references in my research...and the most interesting thing is that we talk about one of the weapons not very well known to the Russians, but the terror of the German heavy tanks, in its anti-tank function: the 100mm BS-3 gun.
The project will look something like this:

With the necessary introductions done, it's time to work...The bald one is getting impatient...
Early versions of this kit featured the tire treads in a weird and wrong alignment. I'm glad my kit is from the corrected version...

As it's a double project, while the truck dries the collages, let's start building the BS-3 100mm gun! Kojak is not a lazy guy (but I am...)!!
But on the other hand, the injection defects in the cannon retriever are simply horrible. It's not worth trying to fix it...It's best to replace the damaged part with a plastic rod of the correct size...

And now, a tense moment: my kit came with a part (very important...) missing: the left suspension arm (A7). As the kit is very old, there is no possibility of complaint... The way is to reproduce the left arm (A8), with the technique of reversible hydrocolloid and acrylic.


While the glue cannon parts dry, let's try to improve the look of the Studebaker. And, as always, Value Gear Details is a great choice...


Next step: markings and paintings!!
The Studer will bear a well-worn winter camouflage (it's April...), with faded white stripes over the Olive drab of American Lend Lease trucks, with the markings of the 1st Ukrainian Front (under the command of Marshal IS Konev), 3rd Guards Tank Army, 9th Mechanized Corps (Lieutenant General IP Sukhov), in the desperate final days of the III Reich, during the crossing of the Kanal Tetlow, in the suburbs of Berlin, on April 24, 1945. Not a step back!! 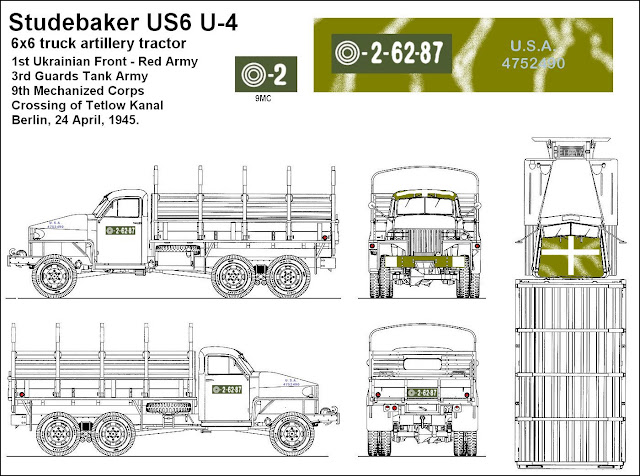 The BS-3 100mm gun as it was a new piece, just released on the battlefront, it will feature a Russian Green pattern paint, without much wear and tear... It will work hard, from now on!!! Death to Fascists!!!


Time to do the decals... The concept-idea is to make a rectangle in Russian Green with the inscriptions of the 9th Mechanized Corps in white, as if the Studebaker had been remarked (hence the reason why the rectangle is in Russian green and not in yankee olive-drab...).
After making the decal artwork in Corel Draw, I printed the colored portion of the decal onto a piece of transparent decal and made a rectangle with slightly smaller dimensions to serve as a background, as my old laser printer doesn't print the white.
You must ask yourself: What is the work of making the decal in two layers? Well, if I only use the transparent decal, the green color doesn't have the opacity and concentration capacity to stand out...and I don't have the white one, remember?? And if I print the colors on a white decal, when cutting the decal, the white edges are evident in the cut area. Therefore, I apply a white rectangle as the background and, a little bigger, the colored portion over white. Colors are crisp, the white appears and there is no borderline!! Here's the reason... But, let's go on with the party...


While the decals dry, let's pick a few more Value Gear accessories to make our girls even prettier...

Now, it's time to paint the accessories.


And with the application of final details, we've finished yet another project: Kojak and I are pleased to introduce to you the Studebaker US6 U-4 6x6 artillery tractor with BS-3 100mm soviet field gun. This truck  belongs to 1st Ukrainian Front (under the command of Marshal IS Konev), 3rd Guards Tank Army, 9th Mechanized Corps (Lieutenant General IP Sukhov), fighting in the desperate final days of the III Reich, during the crossing of the Kanal Tetlow, in the suburbs of Berlin, on April 24, 1945.