This project I conclude about 8 years ago. I took new pictures of her finished and now, let's publish this interesting vehicle. Let's talk about a very powerful and simple self-propelled artillery piece, much to the German taste of modifying and using captured material: let's talk about the might 15 cm sFH 13/1 (Sf) LrS - Sd.Kfz. 135/1. 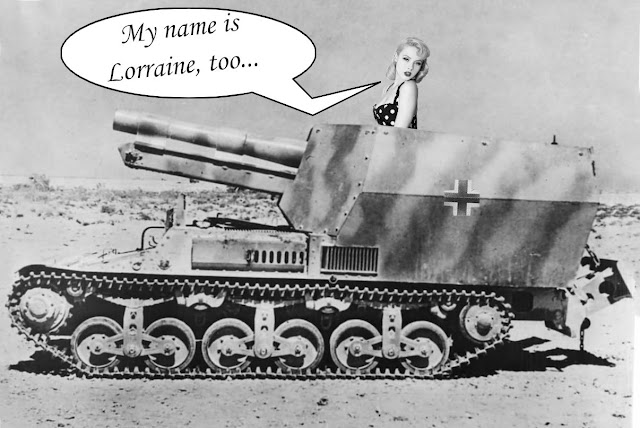 History:
The 15 cm schwere Feldhaubitze 13/1 (Selbstfahrlafette) Geschützwagen Lorraine Schlepper (f) , abbreviated to 15 cm sFH 13/1 (Sf) LrS (identification number: Sd.Kfz. 135/1), was a German self-propelled artillery appeared during the Second World War . Made a bit less a hundred copies, the self-propelled gun was one of several armored vehicles produced by Nazi Germany with the reuse of captured or obsolete materials: it was a French artillery tractor Lorraine 37L which was coupled with a heavy field howitzer sFH 13 150 mm, without any other substantial modification.
The vehicle was mainly used in North Africa by the Deutsche Afrika Korpd of General Erwin Rommel and by the troops placed in defense of the Atlantic Wall, operating from the second line with indirect support fire.

Development:
The victorious French campaign in the spring of 1940 provided to Nazi Germany a huge war booty, including large quantities of French motorized vehicles: among these were also dozens of Lorraine artillery tractors 37L. For some years most of these vehicles were left in storage in warehouses, until at the beginning of 1942 an German officer stationed in Paris , Major Alfred Becker, thought about the use of these tractors for assembling various types of heavy artillery and with this provide the Army with simple and cheap yet battle effective self propelled guns.


Major Becker was assigned to Alkett to create these mobile field pieces for Rommel in North African campaign. The battles in the open spaces like the desert placed a premium on mobility. The Lorraine chassis, with its forward engine design and reliability, lent itself to this SPG conversion.
The resulting vehicle, known as 15 cm sFH13/1 (Sf) auf Geschützwagen Lorraine Schlepper (f), obtained the approval from the Oberkommando des Heeres (OKH), which issued a directive for the immediate manufacture of the vehicles. The waepons were immediately shipped to North Africa for use with the Afrika Korps.

Production:
The manufacture began in May 1942: the Alkett was responsible for providing the superstructures and the modified vehicles were delivered to Paris and finalized there on the hulls of the forty prepared Lorraine tractors under the supervision of Major Becker. At the beginning of July, another seventy-eight Lorraine were subjected to the conversion process. Ninety-four units were built in total, although it is not known when the modifications had actually ended.

Operational use:
Of the units already produced, some were sent by ship to Libya: ten units went to the artillery groups of the 21. Panzer-Division and eleven to the 15. Panzerdivision.  Some sources reports different data: it was planned to deliver twelve to each of the Panzerdivisions and six to the 90. leichte Division , but during the sea trips between July and August some vehicles were lost and only twenty-three arrived at their destination.

The 15 cm sFH 13/1 (Sf) Geschützwagen Lorraine arrived too late to contribute to the Battle of Gazala, took part in the advance to El Alamein and unsuccessful attempts of General Rommel to continue towards Alexandria in Egypt. Then they fought during the Battle of el-Alamein, but by the end of November 1942, all the Lorraines had been destroyed or abandoned and then captured by the 8th British Army.

The rest of the units produced remained in Europe and there are no reports of the use of these weapons on the Eastern frontiers or the Italian front.
On D-day Normandy landings, 6 June 1944 the German forces in France still counted fifty-four of these self-propelled howitzers Lorraine in their ranks.

Characteristics:
Exactly as it had been in other French hulls conversions, Major Becker retained the chassis of the Lorraine and designed an open-superstructure to contain the field howitzer, attaching it on the tractor's rear floor. Overall the self-propelled gun weighed 8.5 tons and exerted a ground pressure of 0.64 kg / cm² also due to the narrow tracks. To keep a light weight, the vehicle did not have heavy armor. The front armour and the shield were 10 mm thick and inclined at 8 °; the sides measured 9 mm at 12 ° and the rear, with the same inclination, was equipped with a 7 mm thick plate. The hull had 12 mm armor on the rounded snout, 9 mm for sides and rear, and 5 mm for the floor.

In the tractor's rear superstructure, a 150 mm Ig. sFH 13/1 L17 heavy howitzer with 17 calibers (L17-long barreled) was install. Dating back to the World War I , the weapon was slightly modified for this particular use.

The heavy howitzer had a limited manual transverse of 5 ° to the left and right, while the elevation covered an arc from 0 to + 40 °. The aim was achieved thanks to a telescopic sight Rblf. 36. The maximum range of the piece was about 8.620 meters; the high explosive shells used were 42 kilos each and reached a muzzle velocity of 365 m/s.
Because of the size and weight of the ammunition and the tractor's dimensions, the SdKfz 135/1 presented a major problem of storage of ready-to-use projectiles: only eight of then.
For close defense and anti-aircraft use, a 7,92mm MG 34 machine gun could be installed in the right front corner of the vehicle superstructure.
Firing operations revealed the instability of the weapon system, so a large tailskid was hinged to the rear of the superstructure, which was lowered to touch the ground to keep the vehicle firmly in place when firing.
The engine was the original, a Delahaye 103 TT six- cylinder, displacing 3.556cc , water-cooled and delivering 70 hp at 2 800 rpm ; it was fueled by petrol and the attached tank could contain up to 111 liters. 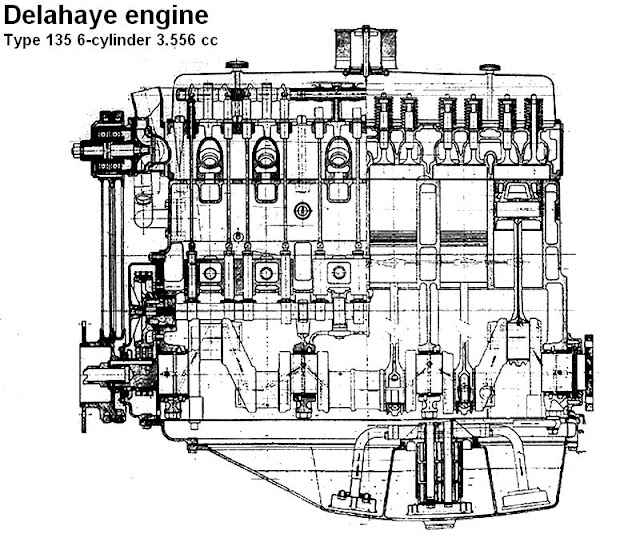 The front mechanical transmission was connected to a manual not synchronized gearbox with five forward gears and one reverse; the steering was done through the use of two directional levers assisted by the action of the clutch and the brake, also there was a differential to facilitate off-road driving.  Six large road wheels in three pairs of bogies gave a low ground pressure and good weight distribution. Each bogie is allowed a vertical movement in its entirety, sprung by an inverted leaf spring assembly located just below the upper track run, the three assemblies being placed between the four top rollers. 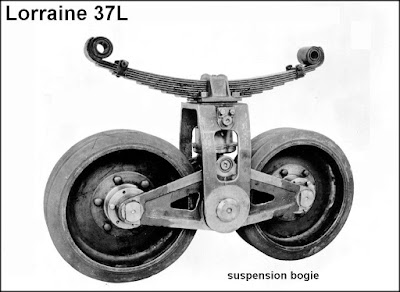 The suspension was completed with the front drive sprockets and the rear idler wheels.  The rear ones were reinforced by the Germans to better withstand the additional weight of the armament. The tracks had not been replaced: they consisted of 109 steel links with an outer tooth guide and measured 220 mm in width. There was no type of shock absorber.
Of the crew only the driver sat in the hull, while commander and servants remained in the open casemate, thus exposed to the danger of air strikes, shrapnel or infantry ambushes. For communications, a FuG Sprf radio was available with a 3-kilometer radius when the vehicle was stationary, with a 1.40 or 2 meter high-styled antenna.

The vehicle was capable of a maximum speed of 34 km/h on paved road and 13 km/h in off-road conditions; The autonomy was 135 and 88 kilometers, respectively. The self-propelled howitzer could overcome rather deep fords (0.85 meters), trenches up to 1.80 meters wide and vertical obstacles 0.56 meters high. The suspension clearance was 18/30 centimeters.
Specs: 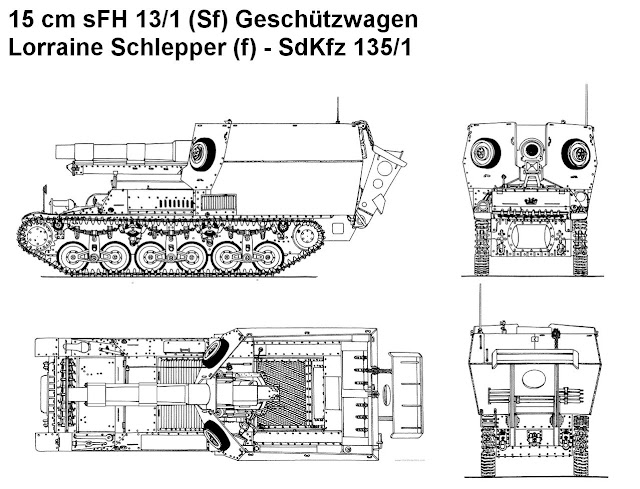 Starting by the suspensions...

This was a very cheap project: original RPM vinyl tracks !!! For the strongest !!!

Trying to turn the horrendous into something acceptable ...


Phew ... While my heartbeat returns to normal, let's devote ourselves to one small detail: since I'm going to make the Normandia version, I need extra wheels to attach to the front armor (a characteristic of this version ...). But the sweet RPM did not include those spare wheels in your kit. Is not it awesome ???
Where are the wheels ???

But back to the spare wheels, luckily, I have another RPM kit available to copy the wheels. I would hate to sacrifice a kit just for this ... Time to copy the parts !!!
The dental reversible hydrocolloid already liquefied by heating (in microwave ... it is very important not to boil !!) 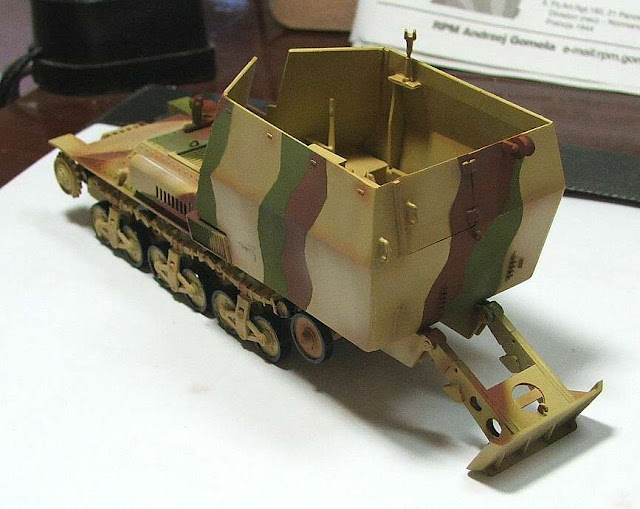 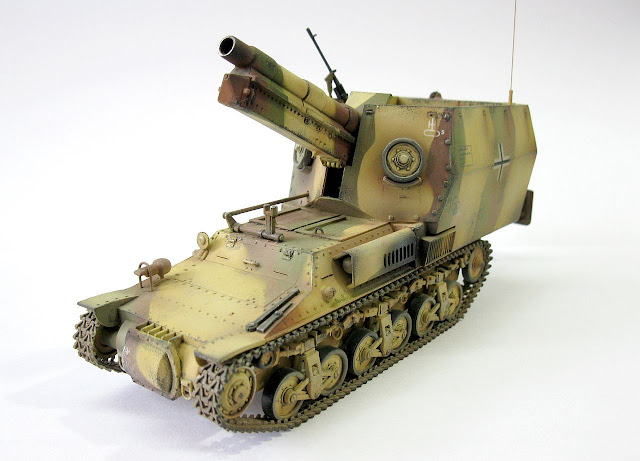 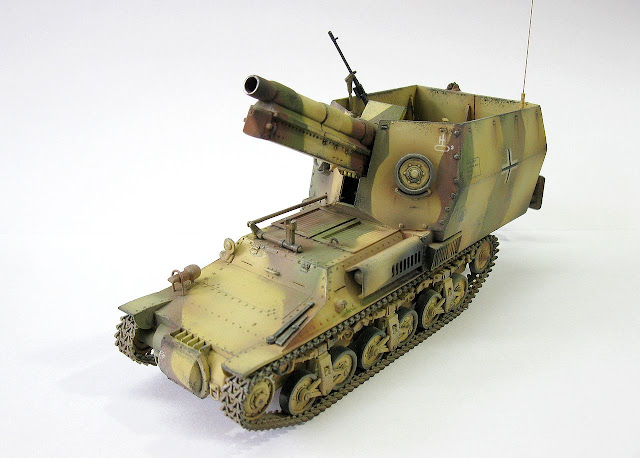 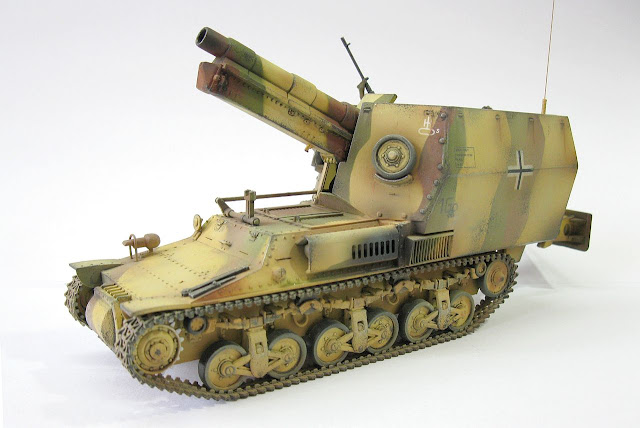 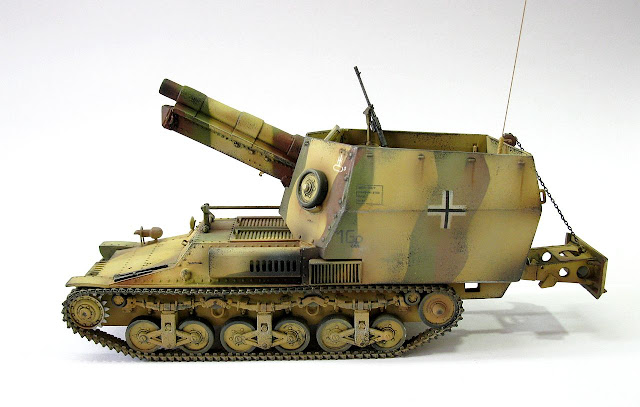 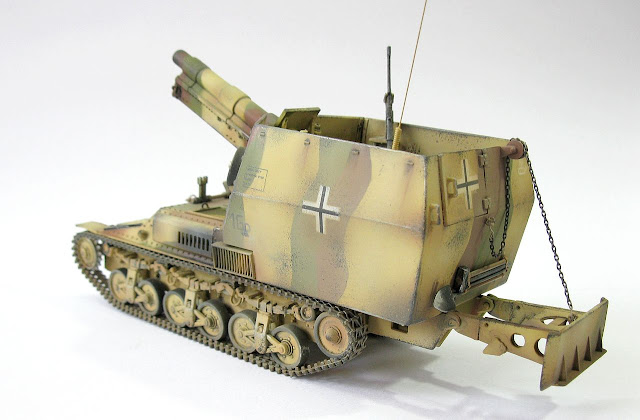 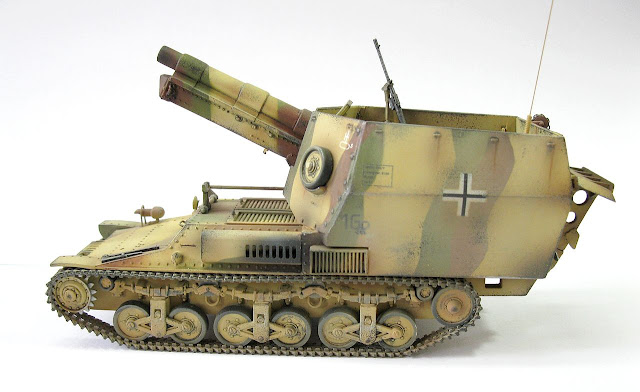 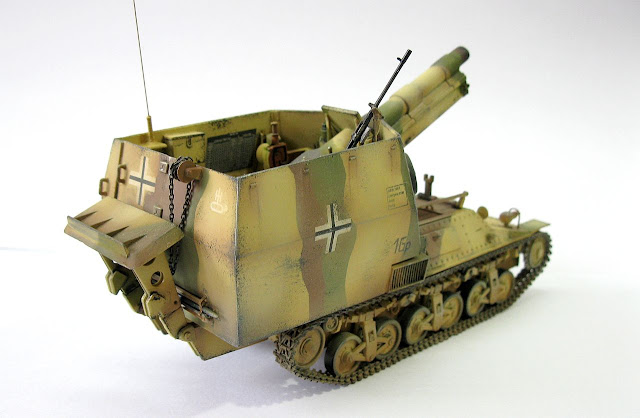 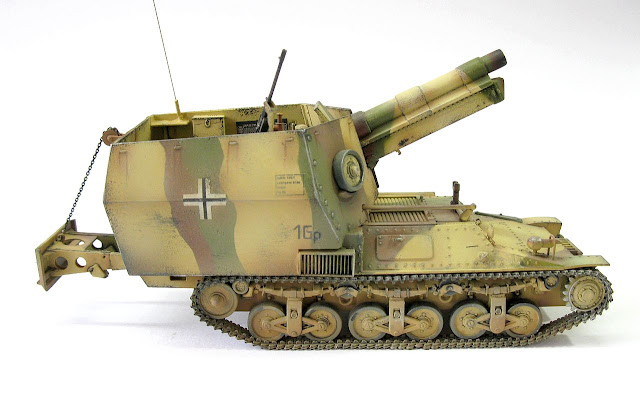 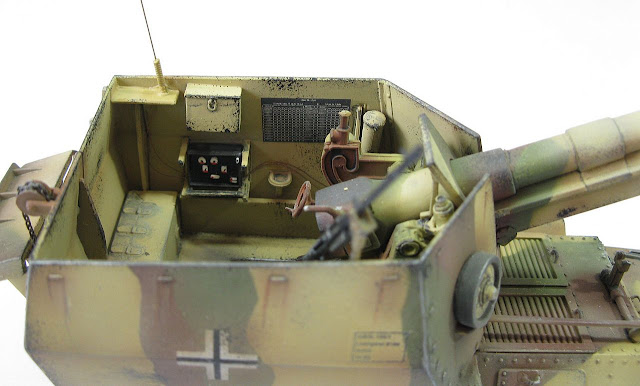 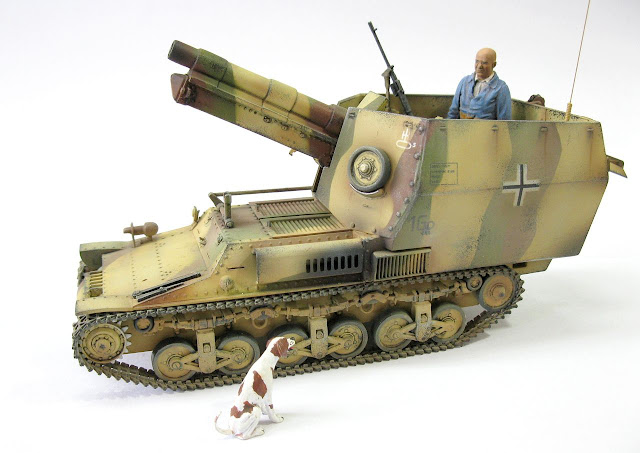