Tovarish !!!
Let's see an interesting project, now. It's a small weapon made with simple materials, but with great effectiveness: A typical example of Russian Ingenuity. The Assault Gun SU 1-12 and his civil sister, the GAZ-AAA cargo version. 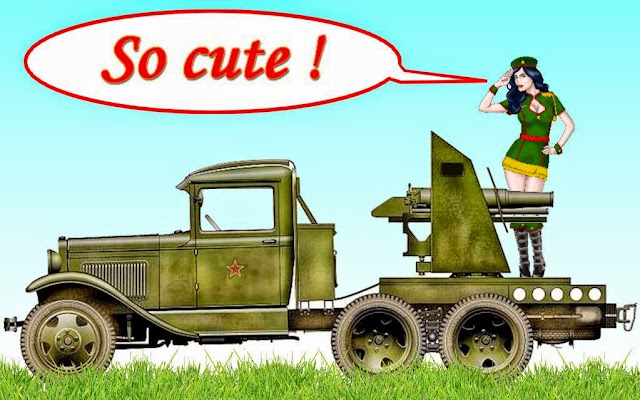 For the motherland !!!
History:

The Red Army was interested very early in the self-propelled artillery, but in the twenties, the constructive capacity of the industry to build vehicles with tracks was still incipient. Because of this, the logical choice was the use of a wheeled chassis. However, to offset their poor off-road capacities, these vehicles are very fast and agile on road. The conversion of a simple truck into a self-propelled gun was easy: just install a gun on the rear platform of a standard truck.
The SU-1-12 Assault Gun was a common truck with a 76 mm regimental gun M1927 in the cargo deck able to fire an explosive OF-350 of 6.2 kg at a distance of 4200 m.
For this weapons system, two models of trucks were chosen, the first is a 6x4 Moreland (copy of the American model) powered by a 6 cylinder gasoline, which was made in 48 copies.
The second is the 6x4 GAZ-AAA (Russian copy of the Ford Timken) powered by a 4 cylinder, which was manufactured in 51 copies. About the GAZ-AAA, I made a historical review when built the refueling version of this truck. The two trucks had 6x4 traction for better distribute the gun weight in the rear.
The designers had to make a few modifications. First of all, the cargo compartment was equipped with a special platform, on which was mounted the gun with shield. The combat platforms are designed to permit a field of fire of 360° with the gun at maximum elevation.
The presence of the truck cab allowed a field of fire of 270° with the gun in horizontal shooting. When the howitzer was fired directly on top of the cabin, there was the danger of gases and debris of shot damaged the cabin's structure. To prevent that, an armour roof was built in the GAZ-AAA trucks.
For better military performance, the trucks was also complemented by the following elements:
The SU-1-12 Moreland made their appearance in 1933 and the SU-1-12 GAZ-AAA 2 about years later. About the operational use and maintenance, the SU 1-12 data are very few. By mid-1938, the Su 1-12 in the chassis Moreland were a part of the tank units of the Leningrad, Moscow, Kiev and Belorussian Military Districts, and SU-1-12 on GAZ-AAA was part of Leningrad, the Trans-Baikal, Moscow and Kiev Military Districts and Special Red Banner Far Eastern Army. However, during those years almost a third of the trucks had to do extensive repairs, after which almost all weapons on the chassis Moreland were recorded as decommissioned.
By the time of the first Soviet-Japanese conflict that erupted at Lake Khasan in the summer of 1938, the number of SU 1-12 decreased markedly. However, the remaining machines were very actively involved in the fighting on the final stage of the fighting against the Japanese. Apparently, the most vivid battle scene involving the SU-1-12 took place in July 31, when this type of SPG, operating as part of the artillery batteries of the 2nd and 3rd tank battalions and Odwan mechanized brigade took part in the battles of this theatre of operations. During the day, self-propelled guns provided substantial support to the tanks of 2nd Mechanized Brigade, firing against the enemy almost 250 76-mm projectiles.

There is also information about the participation of SPG SU-1-12 in the summer battles in Khalkhin Gol in 1939. The only unit that possessed guns of this type, was the 32th Mechanized Brigade, which had been transferred in 1937 to Mongolia to strengthen the Soviet group of forces in the region. 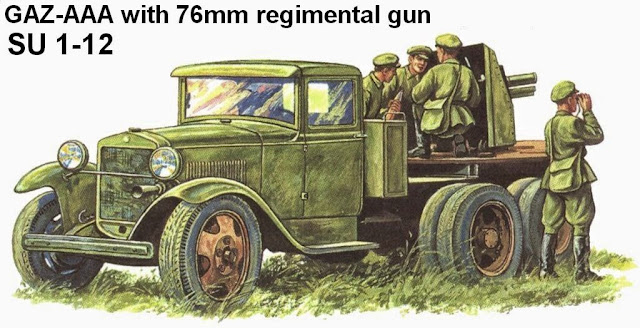 In 1939, they were still part of the material park of the Red Army and perhaps participated in the attack on the Poland in September of the same year.
During the Soviet-Finnish War SU1-12 were adopted only by one unit: the 33rd Separate Reconnaissance Battalion, which as of March 9, 1940 had two T-27 tankettes and two SU 1-12 on GAZ-AAA.
By December 1, 1940 the Red Army tank units formally still had three SU-1-12, who were in the Trans-Baikal Special Military District. After that, the fate of these vehicles is uncertain. But we have to admit it's an excellent record of service for such simple and improvised weapon.
Specs: 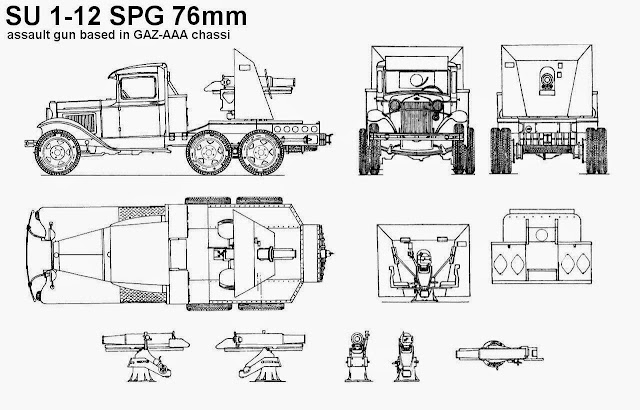 I have some older GAZ kits of various brands and I'll use these relics for my project. The conversion kit is the excellent resin kit from ARMO.
The cradle of the gun is just embedded in the pedestal. To avoid accidents, such as falls, I will use a screw to allow movement but prevent accidents. Firdt of all, open the botton of the chassi, to allow access to the screw head.
Starting the cargo verson (from Toko, light gray plastic):
Let's continue the project of two Soviet trucks ...
The tarp on the cargo bed is beautiful, but the lack of details of his termination is horrible. I decided to "skinning" the plastic tarp with tracing paper. With this, I can make the canvas moorings in the cargo area. First of all, gluing the tracing-paper with PVA glue: 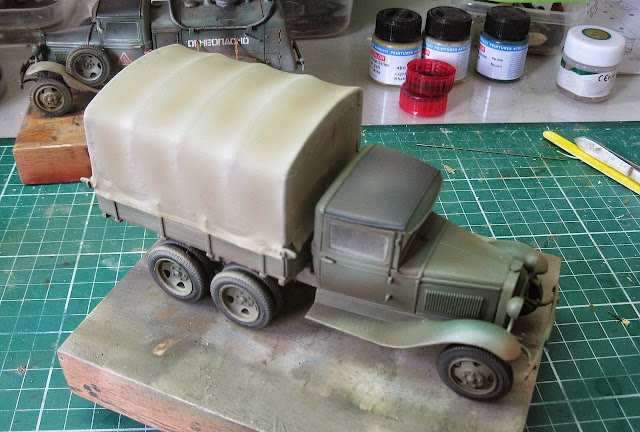 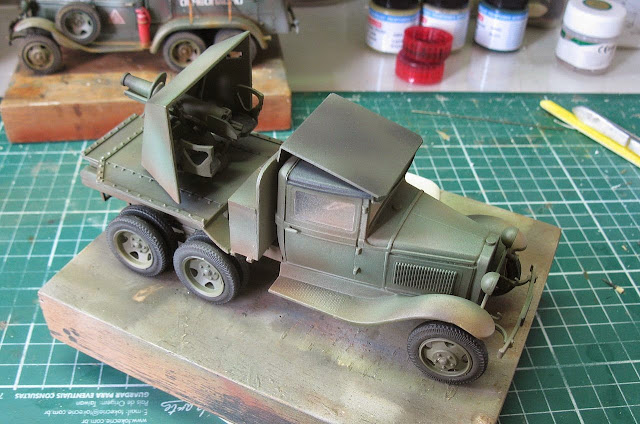 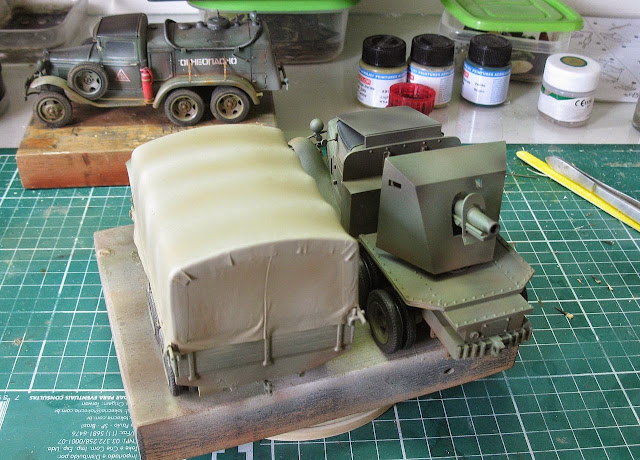 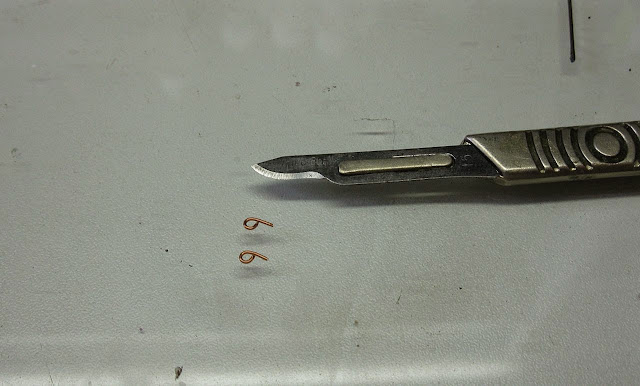 After that, drill the cargo body and gluing the rings with superglue, following this rigging scheme: 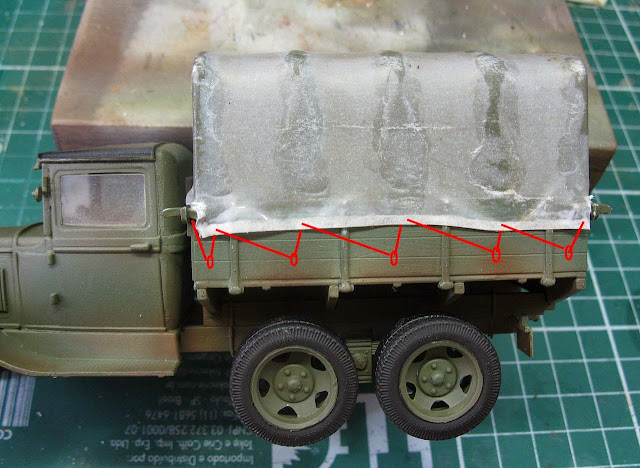 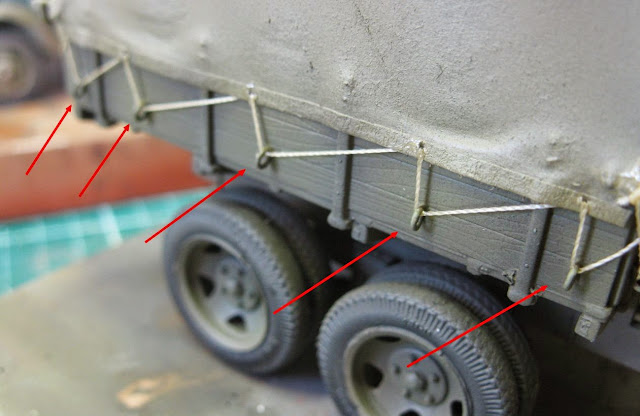 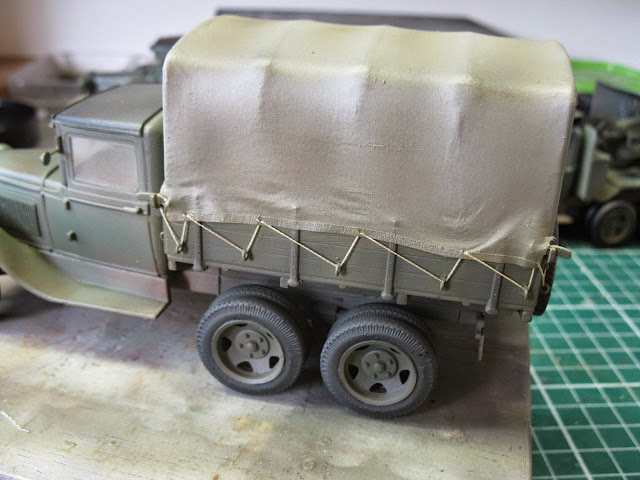 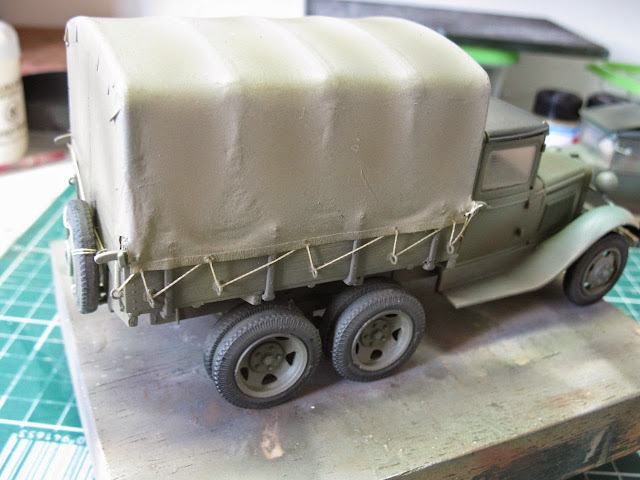 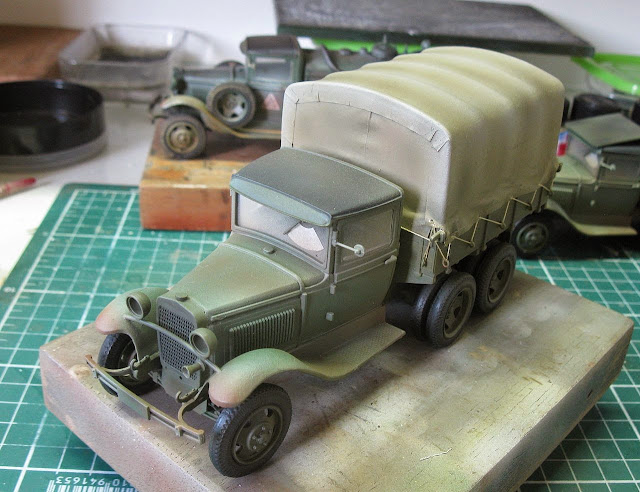 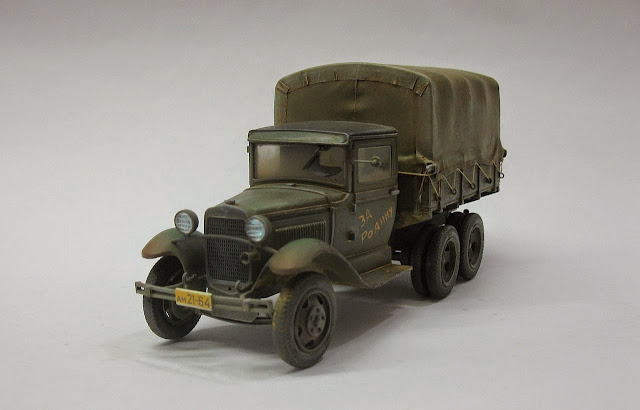 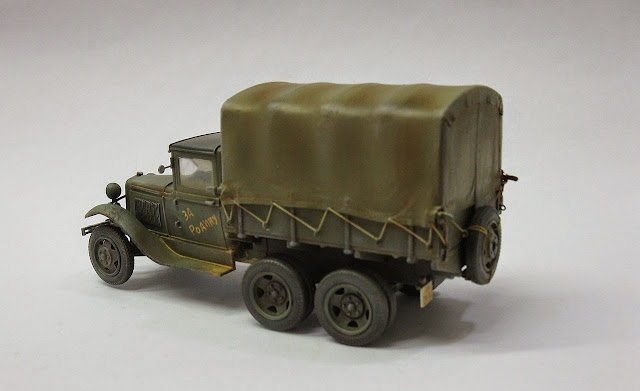 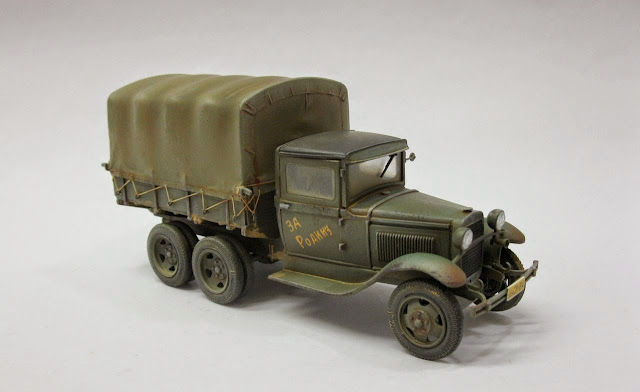 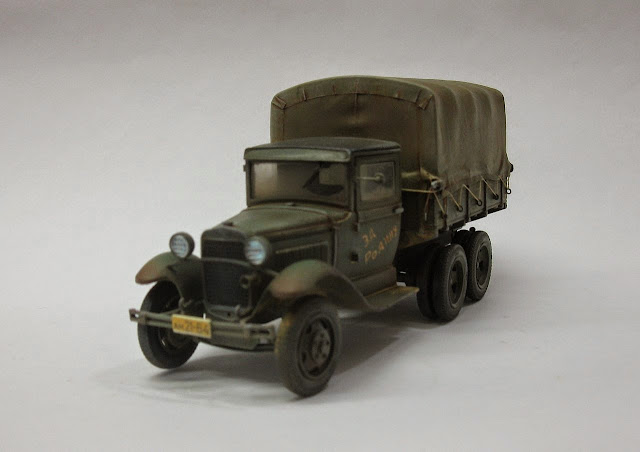 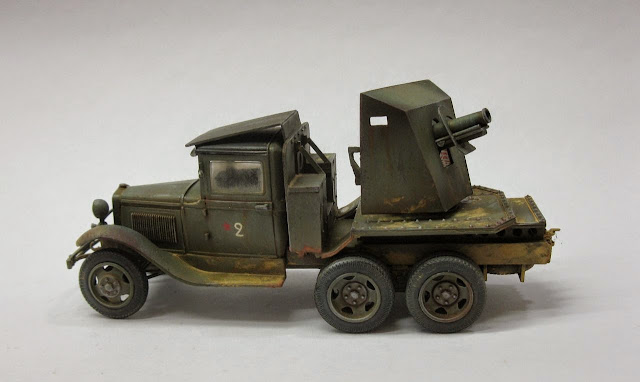 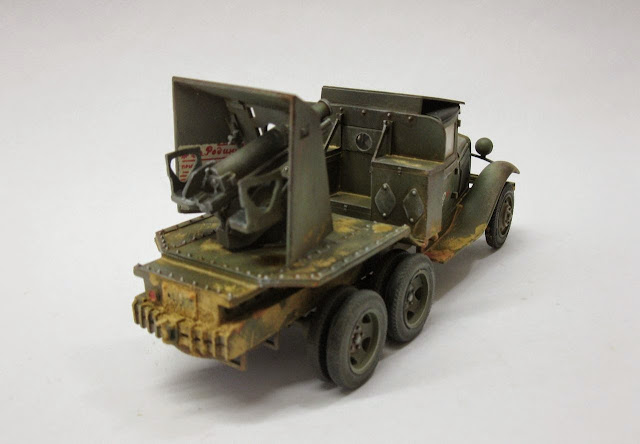 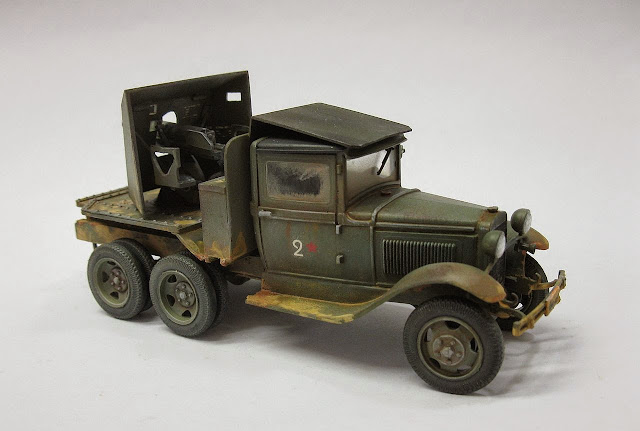 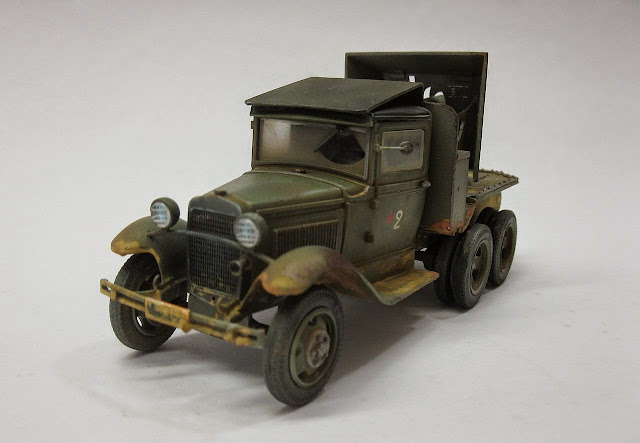 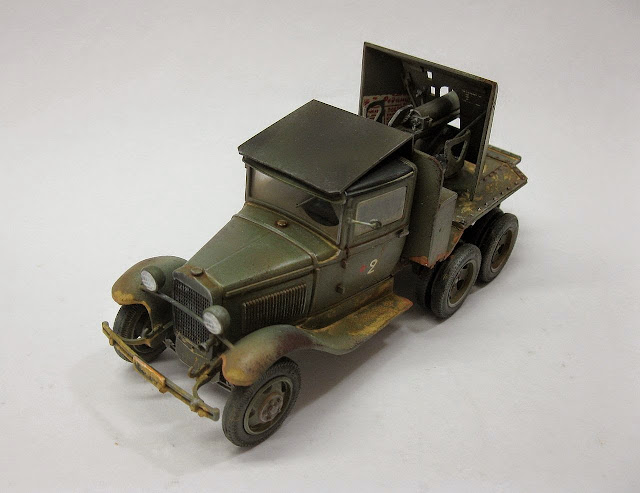 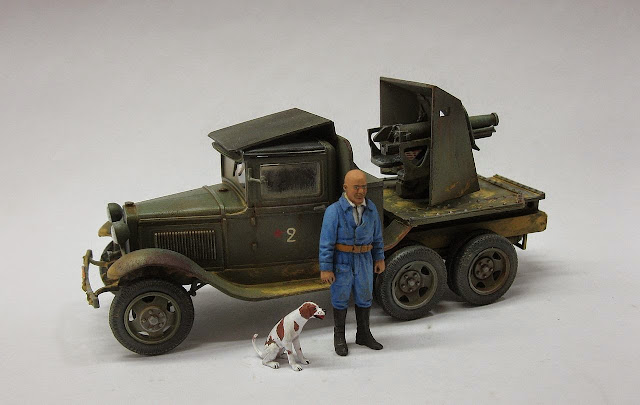 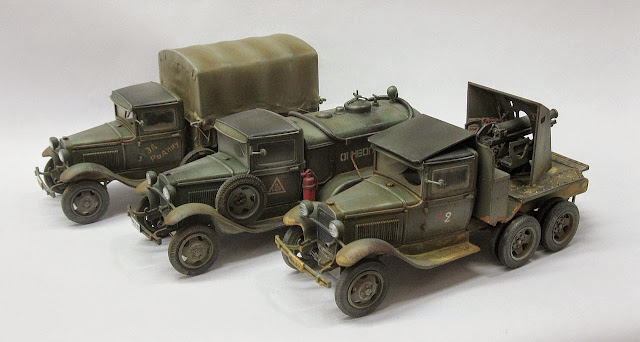