Today let's talk about one of WWII's best-known self-propelled artillery vehicles: The subject is the M7 105mm Howitzer Motor Carriage (HMC) "Priest", but let's focus on one of its lesser-known versions: the dozer version. But before, let's make some comments about this weapon. 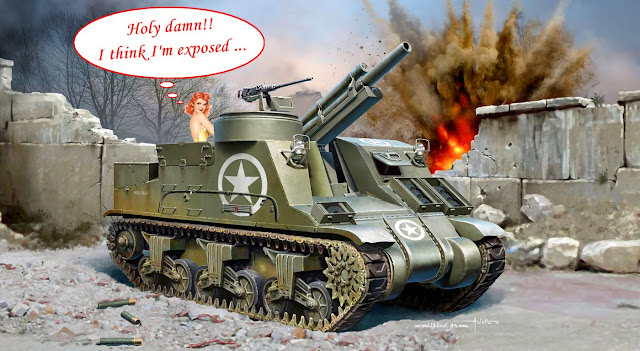 History:
The 105 mm Howitzer Motor Carriage M7 was an American self-propelled artillery vehicle produced during World War II.
It was given the official service name 105 mm Self Propelled Gun, Priest by the British Army, due to the pulpit-like machine gun ring, and following on from the Bishop,  Deacon and Bishop self-propelled guns.

U.S. Army observers realized that they would need a self-propelled artillery vehicle with sufficient firepower to support armored operations. Lessons learned with half-tracks, such as the T19 Howitzer Motor Carriage (HMC) with a 105 mm howitzer on the M3 Half-track chassis, also showed that this vehicle would have to be armored and fully tracked.
It was decided to use the M3 Lee chassis as the basis for this new vehicle design, named T32. The pilot vehicles used the M3 chassis with an open-topped superstructure, mounting an M1A2 105 mm howitzer, with a machine-gun added after trials.
The T32 was accepted for service as the M7 in February 1942 and production began that April. The British Tank Mission had requested 2,500 to be delivered by the end of 1942 and a further 3,000 by the end of 1943, an order which was never fully completed.
As the M4 Sherman tank replaced the M3, it was decided to continue production using the M4 chassis (the M4 chassis was a development of the M3). The M7 was subsequently supplanted by the M37 HMC (on the "Light Combat Team" chassis that also gave the M24 Chaffee light tank).
While the first M7s were produced for the U.S. Army, some were diverted to support the British in North Africa. Ninety M7s were sent to British Armour Divisions in North Africa, which was also the first to use it, during the Second Battle of El Alamein, along with the Bishop, a self-propelled gun based on the 87.6 mm calibre Ordnance QF 25-pounder gun-howitzer.
The British had logistical problems with the M7, as it used U.S. ammunition that was not compatible with other British guns and had to be supplied separately. The problem was resolved in 1943 with the Sexton, developed by the Canadians on an M3 chassis, using the standard British QF 25-pounder.
The British used the M7 throughout the North African and Italian campaigns. The 3rd and 50th British, and 3rd Canadian divisions that landed on Sword, Juno and Gold beaches at the start of the Allied invasion of Normandy had their artillery regiments equipped with the M7; these were replaced by the standard towed 25-pounder guns of the infantry in early August.
See below a little movie (no sound) with British M7 Priests firing near Caen, Normandy, in 26 June 1944. Notice the amount of empty 105mm cartridges being loaded by the English lorries. This logistical nightmare (the British did not use the 105mm caliber) ended in Europe with the replacement of the Priests by Sextons (25 pdr.)


The M7 was also used in Burma and played a significant part in the Battle of Meiktila and the advance on Rangoon in 1945.
After the Sexton appeared, most British M7s were converted into "Kangaroo" defrocked Priest armored personnel carriers.
The United States Army assigned M7 105mm HMC to every armored division, each operating three battalions of M7 vehicles. They were used in all War Theaters since their manufacture in 1942.
During the Battle of the Bulge, each U.S. armored division had three battalions of M7s, giving them unparalleled mobile artillery support for the Allied troops as they moved eastward toward and into Germany.


A total of 3,489 M7s and 826 M7B1s were built. They proved to be reliable weapons, continuing to see service in the U.S. and allied armies well past World War II.
Post-WWII:

Korean War
M7 Priests remained in use during the Korean War, where their flexibility, compared to towed artillery units, led the U.S. Army on the path to converting fully to self-propelled howitzers. The limited gun elevation of the M7 (35 degrees) hampered its ability to shoot over the tall Korean mountains, so 127 M7B1s were modified to permit the full 65 degrees elevation in a model known as the M7B2. After the Korean War, many of these were exported to NATO countries, notably Italy and Germany.

Israeli M7 Priests
Israel acquired a number of M7 Priests during the 1960s and employed them in the Six-Day War, the War of Attrition and the Yom Kippur War. In the last conflict, three M7 units, the 822nd, 827th and 829th Battalions in the IDF Northern Command, supported the occupation of the Golan Heights.

West German M7 Priests
The new West German Bundeswehr received 127 Priests as its first self-propelled artillery vehicle. They entered service in 1956 and were used until the early 1960s. One surviving vehicle is now shown at the Deutsches Panzermuseum Munster (German Tank Museum Munster).

My project:
Years ago, I found these photos on the Internet when I was researching American armored dozer blades.
And as I like rare things, the pics were archived for the reproduction of an armored vehicle with these characteristics. I present to you this M7 105mm Priest, with a dozer M1 blade. For this project, I will use a scrap of an old Italeri kit (in which I will make many modifications) and use a M1A1 blade left over from an Academy M4A3E8 105mm Marines dozer kit.

I will do the same adaptation as I did in the M4A3 Marine dozer kit, which I presented in this Bunker. I will not reproduce exactly the vehicle of the photo, but its main features.
I did not want to EXACTLY reproduce the vehicle from Belgium, but I wanted to show the possibility of this type of vehicle.
Well ... made the presentation of the concept, let's to the party !!! 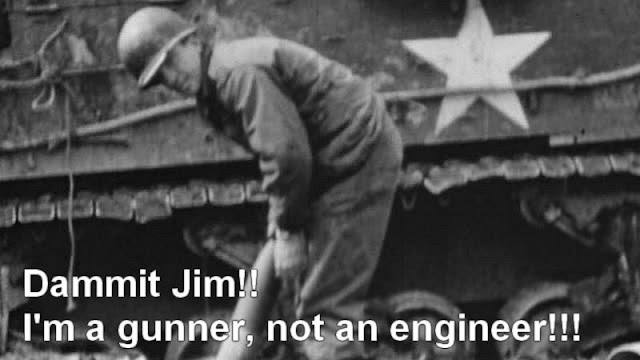 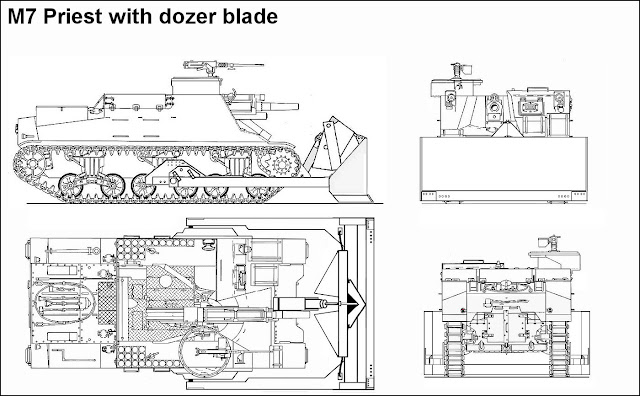 And of course, the Academy's dozer blade described above:

As usual, I like to make a guide or a drawing to the colors and markings of my kits: Meet my newest girl: "LUCKY" M7 105mm Priest HMC with dozer blade. 2nd American Armored Division; 14th Field Artillery - Baker Battery - Gun n.5. In duties at Carentan, France, in 12 June 1944. 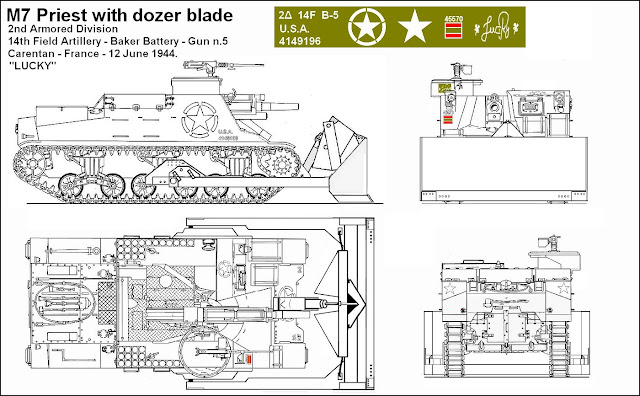 First of all, shades of olive-drab. Notice the shinning areas with Pledge, to prevent silvering in the decals...

The resin parts from Legend Productions:
And the (very well) casted resin accessories.The bad news is the immense amount of resin to be removed from the injection bars. This is a job for my beloved old Dremel and his cutting blades, always a risk to my poor and precious fingers (May the Gods of Resin and Surgery protect me !!)

After hours of cutting, sanding and grinding, the pieces and resins were primed and painted by hand and brush. Uff ... sorry for missing photos, but this step was exhausting ... 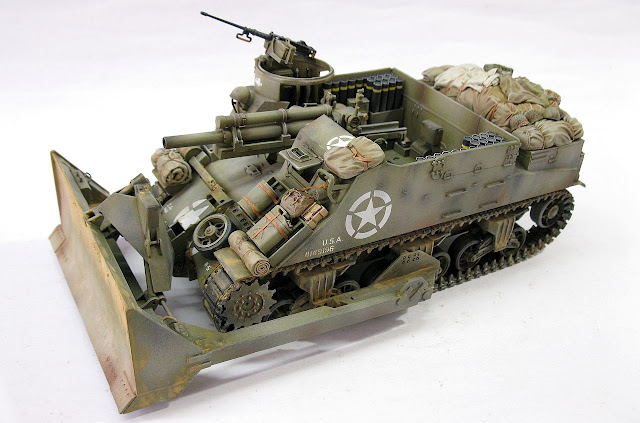 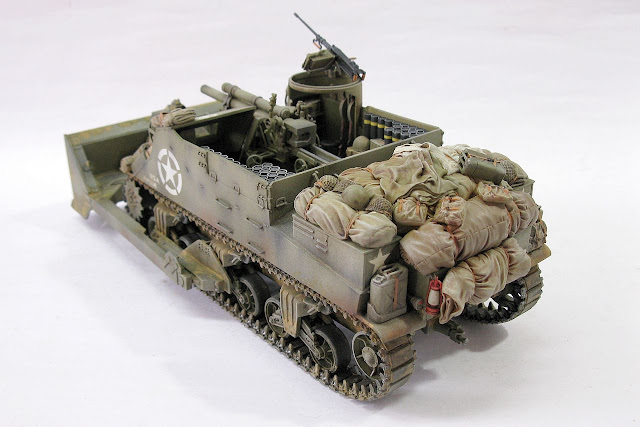 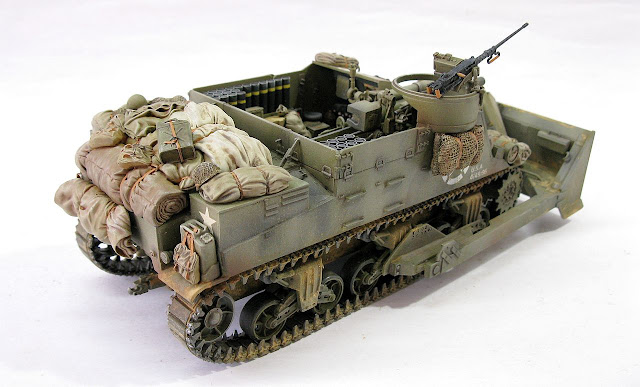 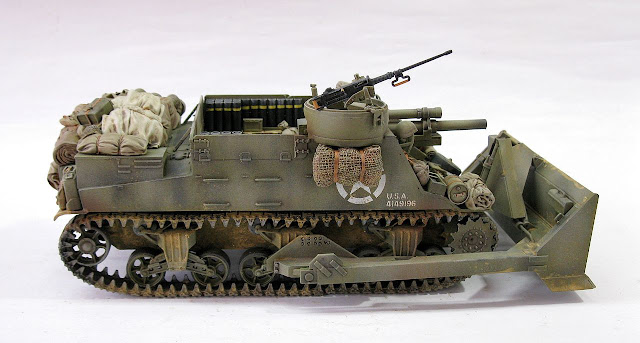 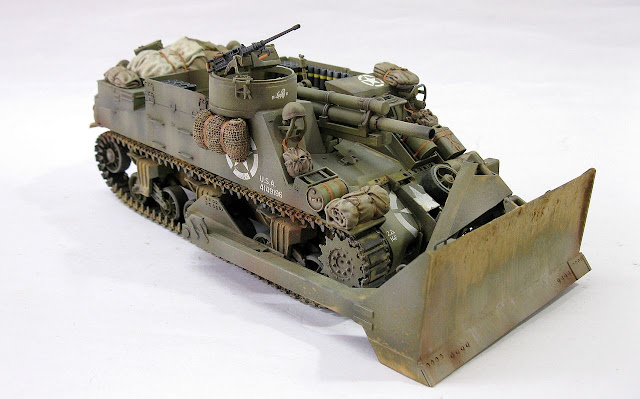