Let's get to know about an old project of a resin kit practically handcrafted by an old Brazilian manufacturer, now extinct, which represents a Ford 3 ton. 4x2 MCP 1941 truck  of Australian Army. The all history is based in this picture: 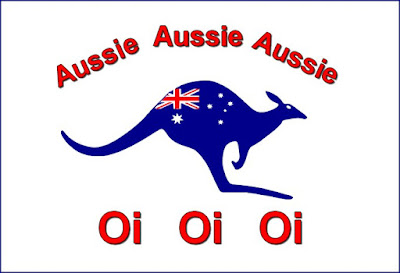 The advent of WWII put Canada firmly on the map as a major supplier of Military Vehicles of many types. Up until September 1.1945, no fewer than 857.970 vehicles were produced, roughly broken down as follows:

Actually, the grand total was even higher because production of certain types was continued until late 1945.
All these vehicles were supplied to the Canadian armed services and the allies. The British took a very large proportion, other major customers being Australia, New Zealand, India and South Africa. Many were shipped CKD for local assembly and in some countries part-manufacture took place, as well as the mounting of indigenous bodywork.

The Canadians themselves used 'foreign' vehicles as well, e.g. Jeeps and Diamond Ts from the USA, Bedfords and Leylands from Britain. Motorcycles were all of British and US origin (Matchless, Norton, HD). Many of the Canadian vehicles eventually served with other United Nations member countries, particularly in the late 1940s and throughout the '50s. Surplus vehicles invariably found their way to civilian operators, all over the world, and a fair number have now been restored for preservation.

An interesting feature of the Canadian Military Pattern (CMP) vehicles was their combination of British design requirements and North American automotive engineering. Initially this compromise was not a great success but from 1942 when all trucks received a much revised cab (No. 13) it was quite acceptable. In Australian service (almost always with the No. 13 cab) these vehicles were known as the "Chev Blitz" or the "Ford Blitz".

The major vehicle producers in Canada at the time were linked with the US 'Big Three': Ford, General Motors and Chrysler. Some of the manufacturing facilities were in close proximity to the US parent plants and certain parts and components were imported from there. The Canadian Chrysler (Dodge) and Ford factories were in fact just across the river south-east of Detroit. General Motors' main plant was - and still is - in Oshawa, Ontario.

The fourth manufacturer was FWD in Kitchener, Ontario. FWD chassis came from Clintonville in Wisconsin and were finished and completed or bodied in Canada. FWD was also engaged in the boxing of other Military Vehicles for shipment overseas. Chrysler Canada had the additional task of fitting out mobile workshops.

Numerous other firms across the nation produced trailers and bodywork of countless types and variants. Bombardier and Farand & Delorme contributed tracked machines and the Tank Arsenal at the Montreal Locomotive Works in Quebec built tanks (Valentine, Ram, Grizzly) and SP gun carriages (Sexton).

Specifically in Australia, during the WWII, the Australian armed forces employed an astonishingly large variety of vehicles. Most were part-manufactured, i.e. built on imported (mostly Canadian) chassis.

Others came from the USA under Lend-Lease or were brought back by units returning from the Middle East, or from other sources, e.g. diverted shipments. Some part-manufactured (Australian Pattern) vehicles and converted types were supplied to US forces in the South-West Pacific (reverse Lend-Lease) and also, later, to Netherlands forces and the British Pacific Fleet.

Several types of Armored Fight Vehicles were made, of which UK-pattern tracked carriers were the most numerous. Of great interest was Australia's own Cruiser tank, known as the Sentinel, several of which have survived.

Many of the wartime vehicles, particularly Australian and American tactical types, were retained for service use after 1945. As suitable new types became available the ranks of the 'wartime Jobs' were thinned accordingly, although certain types - particularly 6x6 Studebakers - were not demobbed until the 1970s.

A surprising number of historical military vehicles have been preserved, primarily in the military museums at Puckapunyal and Bandiana, both in Victoria, and the Australian War Museum in Canberra, as well as various smaller museums and private collections and all the time more relics are being discovered and rescued for preservation. 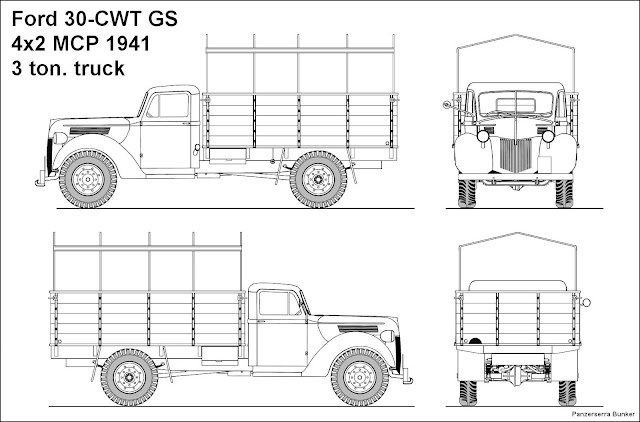 The kit:
When I built this kit (2006), it was the dark days when the injected kits from the ICM and Revell Fords did not yet exist ...

To get a Ford model, the only option was a Brazilian resin kit factory, now extinct, called Panzer Resin Models. The kits were very simple, extremely rustic and my kit was that it served as box-art for PRM.
My goal would be to make a truck similar to the one in the photo: 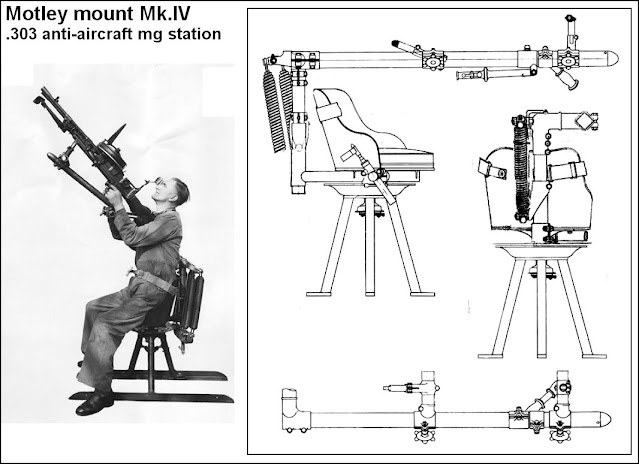 But my truck was executed as a truck from the same unit, but without the armament, but with the spare wheel attached to the canvas frame. Something like this (this drawing is from 2020...): 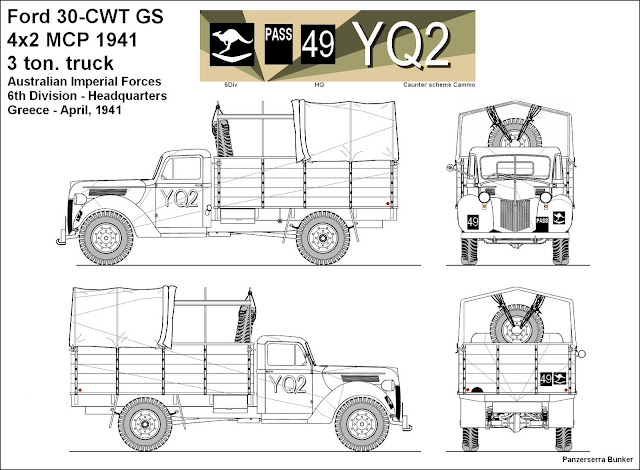 Unfortunately, I lost a lot of pictures of the building ... but I still have some here ...

In these days, the issue of painting with the Caunter Scheme was very controversial ... The "Blue Matilda" tyranny was still very strong ...


But as I am publishing this article just now (October, 2020), I will take the opportunity to correct some errors and try to improve the kit as a whole ...
A good upgrade would be the color tones ... The Caunter Scheme has always generated a lot of controversy, but Mike Starmer can be considered one of the greatest experts on the subject ... After buying his excellent booklet on the subject (which I recommend without any reservation) ...), I decided to redo the old painting with the new colors available on the market.

I like to use these old and raw kits to experiment with new painting, masking and detailing techniques ... my conscience hurts less when I make mistakes .... 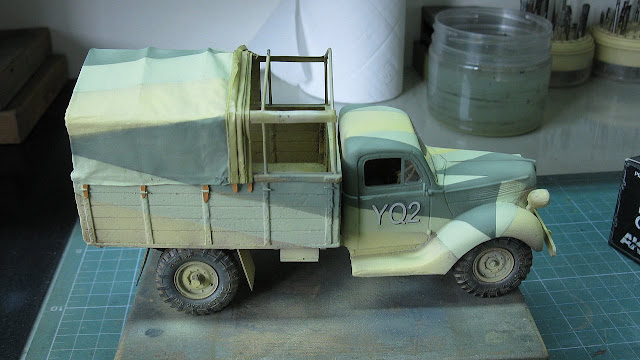 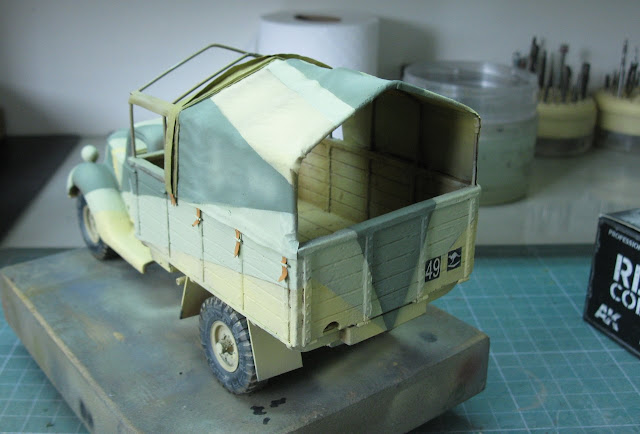 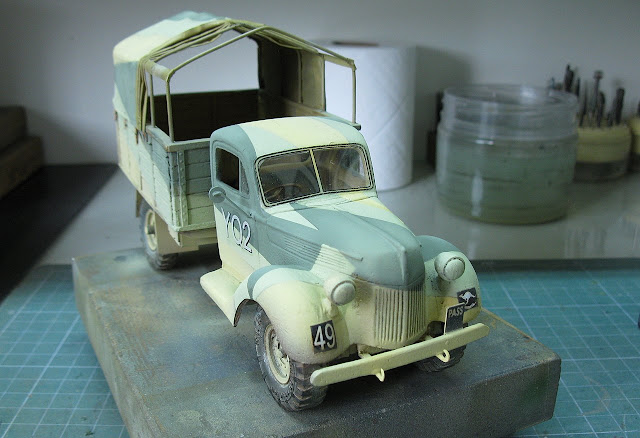 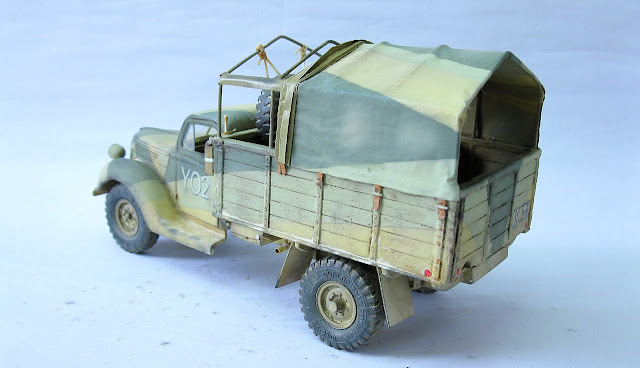 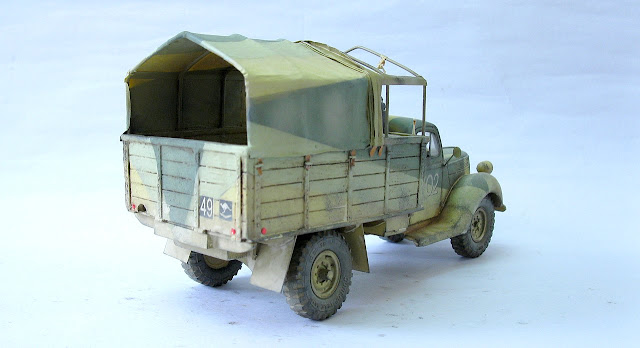 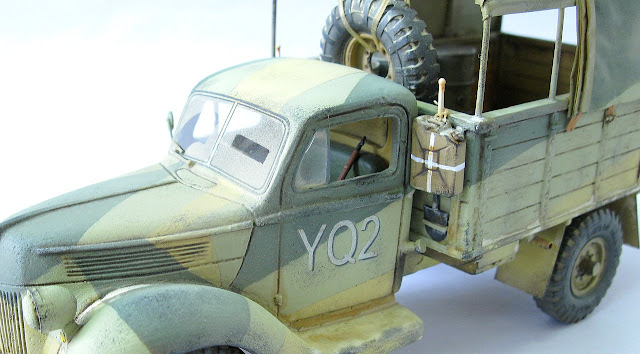 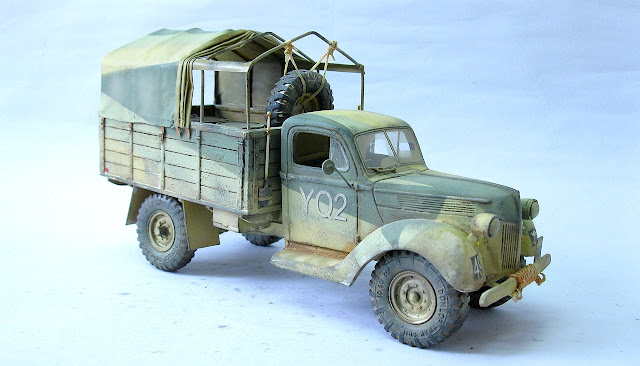