Dive... dive... dive!!
Today we will know this navy machine that came out of the drawing board as a desperate measure of the Germans to contain the Allied landings in Europe. The story of the Biber, the German midget submarine and its brave and lonely men that manned him. 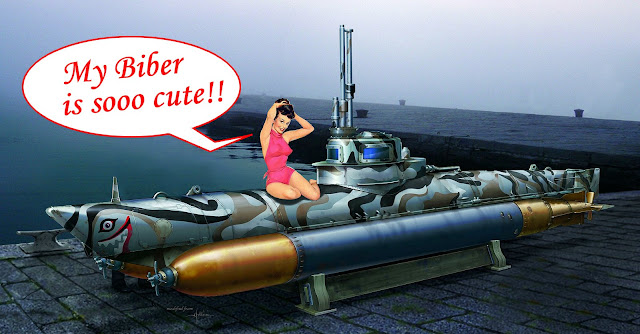 History:
The Biber (German for "Beaver") was a German midget submarine of the Second World War. Armed with two externally mounted 53cm  torpedoes or mines, they were intended to attack coastal shipping. They were the smallest submarines in the Kriegsmarine.

The Biber was hastily developed to help meet the threat of an Allied invasion of Europe. This resulted in basic technical flaws that, combined with the inadequate training of their operators, meant they never posed a real threat to Allied shipping, despite 324 submarines being delivered. One of the class's few successes was the sinking of the cargo ship Alan A. Dale.
Eight have survived in museums, including one example (Biber 105) that has been restored to operational condition.

Development:
Construction of the first prototype began in February 1944 and was completed in less than 6 weeks. The initial prototype, officially titled Bunteboot (but better known as Adam), was heavily influenced by the British Welman submarine.
It differed from the final design in a number of respects such as being nearly 2 meters shorter. Following testing on the Trave river on 29 May twenty four Bibers were ordered.

Design:
The hull was built in three sections composed of 3mm thick steel with an aluminium alloy conning tower bolted to the top.
The conning tower contained armored glass windows to allow the pilot to see out.
The stern planes and rudder were made of wood and trying to control them while tracking the depth gauge, compass and periscope made the craft hard to handle. 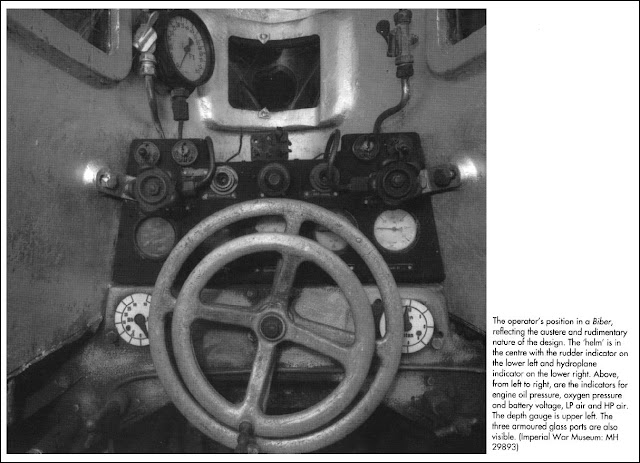 Adding to the pilot’s difficulties, the craft lacked compensating and trimming tanks, making staying at periscope depth a near impossibility.
The Biber had two diving tanks (ballast tanks), one in the bow section and one in the stern. 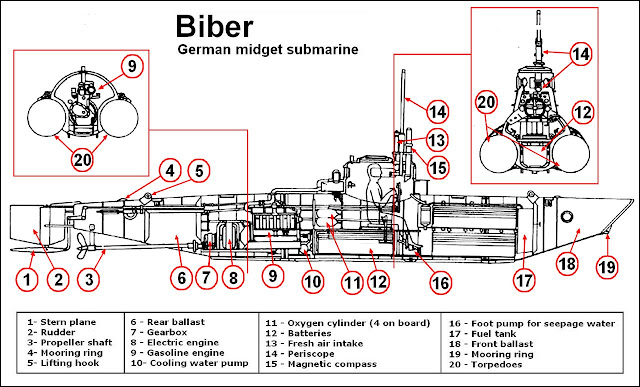 The submarine could be armed with either torpedoe and/or mines. The preferred weaponry was the torpedoes.

She carried two T-IIIc (G7e) special torpedoes with neutral buoyancy (1.343 Kgs - achieved by eliminated of the foward battery). The torpedoes G7a could also be carried, but by this time they were being replaced by the more efficient G7e. 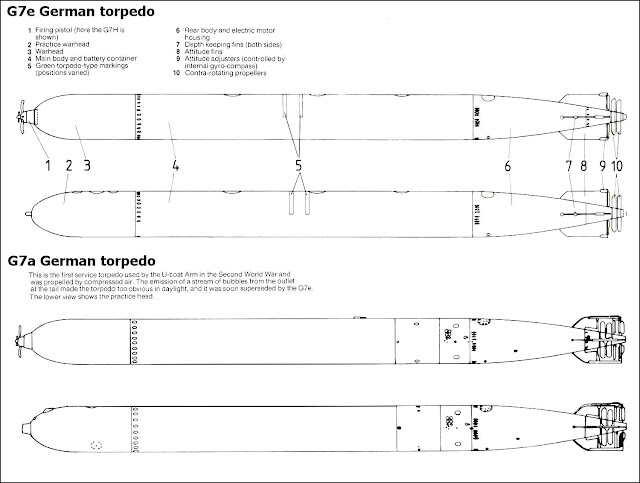 When armed with mines, the Biber could carry 2 mines type TMB (British designation, GS), which had the same diameter as the torpedoes, but much less weight.

The TMB mines was designed especially for submarine use. This was an unearthed "seabed" that utilized a magnetic pistol. It was 2,83m long and carried an explosive charge of 567kg, in the total weight of 760 Kgs. The warhead was twice that of the torpedoes of the time. It was laid on the bottom in shallow seaways and was detonated when a big ship passed over its position. Not many ships survived such a blast under their keel.

The midget submarine could also carry a torpedo and a mine, but it affected the already precarious balance of the submersible. The torpedoes or mines were accommodated in semi-circular recesses in the side of the hull. These reduced the overall width of the loaded craft, making land transport easier and also reduced drag in the water, but at the cost of weakening the hull.

The Biber was powered on the surface by a 32 hp (24 kW) Opel Blitz petrol engine, which was used despite concerns about the risks posed by the carbon monoxide the engine gave off. The engine had the advantage of being cheap and available in large numbers.
Propulsion while submerged was provided by a 13 horsepower (9.7 kW) torpedo electric motor, supplied by three Type T13 T210 battery troughs.


Biber operations were carried out under the auspices of the K-Verband, a German naval unit which operated a mixture of midget submarines and explosive speedboats. The training of Biber operators was originally planned to take eight weeks, but the initial group of pilots was rushed through in just three weeks. Planning also called for flotillas of 30 boats and pilots with just under 200 shore support crew. See the movie below:

Operations generally lasted from one to two days with pilots either using a drug like Pervitin or  D-IX to stay awake on longer missions or caffeine-laced chocolate (Scho-ka-kola).
The poor quality of the Biber's periscope meant that night attacks had to be carried out on the surface.
Fécamp harbour:
The first Biber operation was launched by K-Flotilla 261 on 30 August 1944 from Fécamp harbour against the Allied ships near Normandy landing area. Twenty-two boats were launched but only fourteen were able to leave the harbor and of those fourteen only two managed to reach their operational area.


The Bibers from Fécamp were then withdrawn to Mönchengladbach.

Operations in the Scheldt Estuary:
In December 1944 it was decided to deploy Bibers against traffic to Antwerp in the Scheldt Estuary. The force was based at Rotterdam with forward bases at Poortershaven and Hellevoetsluis. The first attack took place on the night of the 22/23 of December. Eighteen Bibers were involved of which only one returned. The only allied loss caused by the operation was the ship Alan A. Dale. Further operations between the 23rd and the 25th achieved no success and none of the 14 submarines deployed survived.
On the 27th the accidental release of a torpedo in the Voorneschen resulted in the sinking of 11 Bibers (although they were later recovered). The three undamaged Bibers later sailed again; none returned. An operation on the night 29/30 January resulted in damage to (much of it due to ice) or loss of most of the remaining Bibers.
Losses combined with RAF bombing prevented attacks from being mounted in February 1945. The bombing had damaged the cranes used to move the Bibers into and out of the water.

Reinforcements allowed operations to continue until April 1945 but no successes were achieved and the Biber flotillas continued to take a very high rate of losses.
The last Biber mission was an attempt at mine laying and took place on the night of 26 April. Of the four Bibers that took part, one ran aground and three were attacked by Thunderbolts, which sank two of them.
Attempted attack on Vaenga Bay
In January 1945 an attempt was made to mount an attack on Vaenga Bay in the Kola Inlet. The hope was either to attack one of the convoys that stopped there to refuel and take on ammunition or to attack the Soviet battleship Arkhangelsk (HMS Royal Sovereign on loan to the USSR).
As it happened neither the battleship nor a convoy were in the port at the time of the planned attack. The plan was for U-boats to carry the Bibers within range of the harbour. U-295, U-318 and U-716 set off from Harstad on 5 January with Bibers mounted on their casings. Vibrations from the U-boats’ engines caused the Bibers stern glands to leak allowing water to reach the machinery space and as a result the mission was abandoned.
With a loss rate of 69 per­cent, the Biber mid­get sub­marine can truly be described as a sailor’s coffin. Planning for two man versions (Biber II and Biber III) began but never got off the drawing board.

The kit:
This kit will be part of a project consisting of several kits. The idea is to place this Biber in a Faun L900 D567 tank transporter. The concept is based on the days following the Normandy invasion, when the tide of Allied ships and men flooded the shores of France. In those days, the urgency of transporting material for a counterattack was urgent, and any means of moving machinery and weapons to meet the enemy was valid. We will have a Faun D567 L900 hauling the Biber into its cargo area and using its trailer to haul blast mines for beachhead blocking operations. Something like this:
For this project, the choice fell on Italeri's excellent kit U-Boot Biber (#5609). The submarine is very well injected and easy to build. The kit comes with a PE sheet and a good sheet of decals, allowing the construction of various markings. Complete the kit with a stand and two figures.
Let's to the build!!

Time to paint the midget submarine... But I have a problem: whenever I buy Maskol, when I use it, it is "rubbery" and gooey (I use very little ...). So here's a trick for masking surfaces with home-made materials: Mix 50% PVA glue with 50% hair shampoo. Apply the mixture to the area to be isolated with a brush, allow it to dry and paint over it. Then just remove the plasticized layer with the tip of a scalpel and tweezers. Easy like slapping a drunk guy !!! 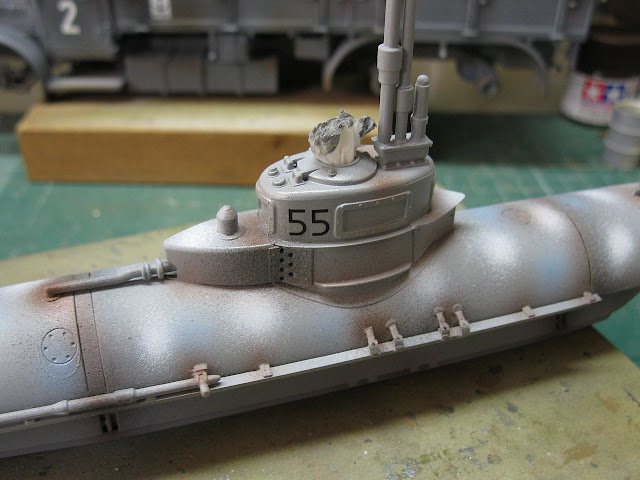 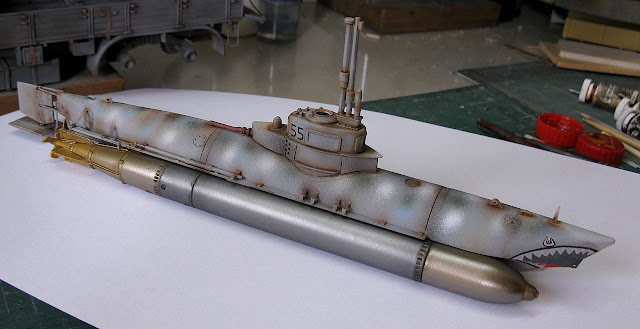 The mines after the weathering, being stored in the trailer transport area. I decided to use old tires to support the mines and wood logs to prevent the movement of this dangerous cargo ... I would do that if I were the driver of this Faun ... 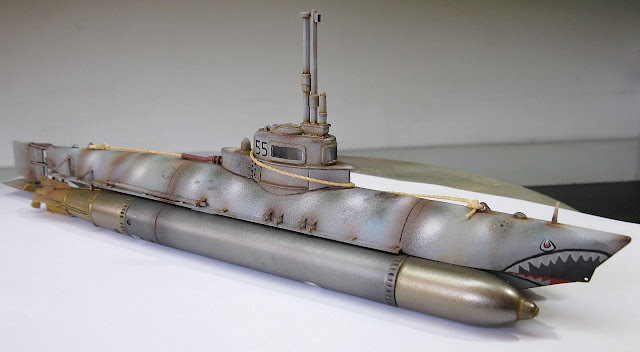 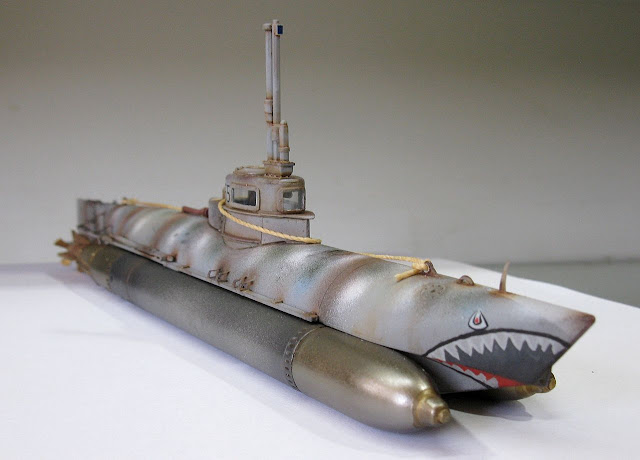 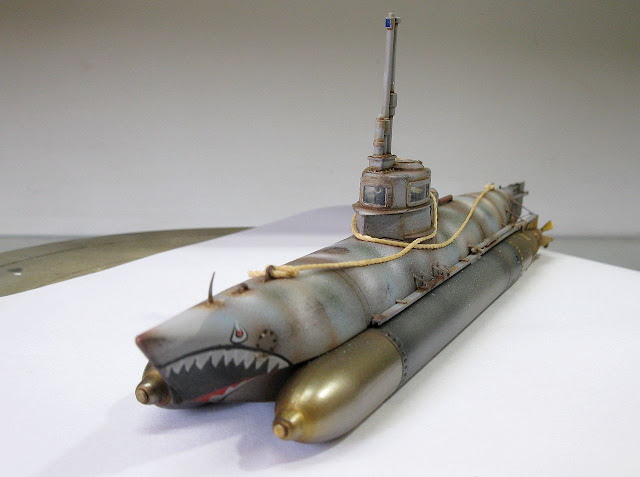 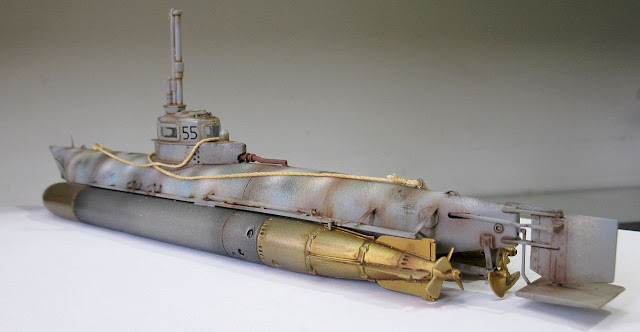 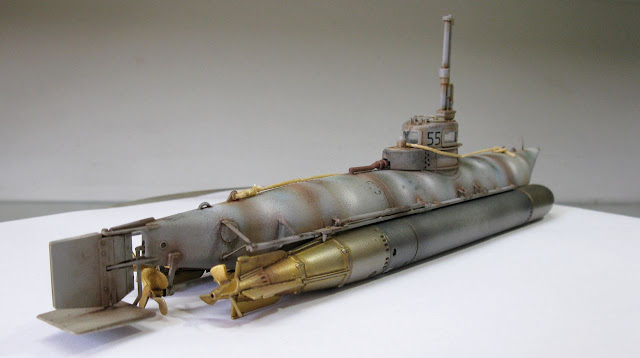 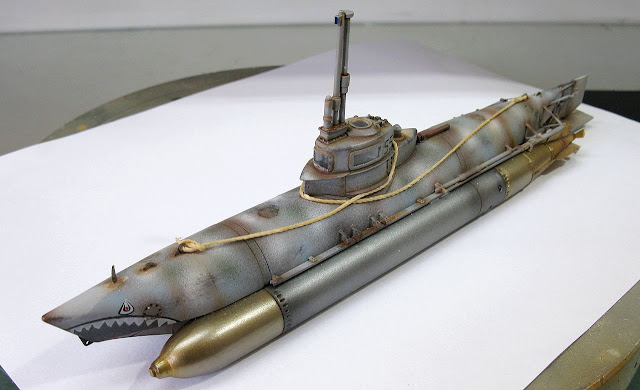 It's a long way to Tipperary, Kameraden!!!