Männer der Kriegsmarine !!
No...You didn't miss the Bunker. We're still at Panzerserra Bunker, about 1/35 military models. But today let's talk a little about the men of the German Navy. More specifically about this heavy truck used by Kriegsmarine in the task of transporting a Biber midget submarine in a Sonderanhänger (Sd. Ah.) 115 trailer . Let's talk about the Faun L900 D567 6x4 heavy truck. 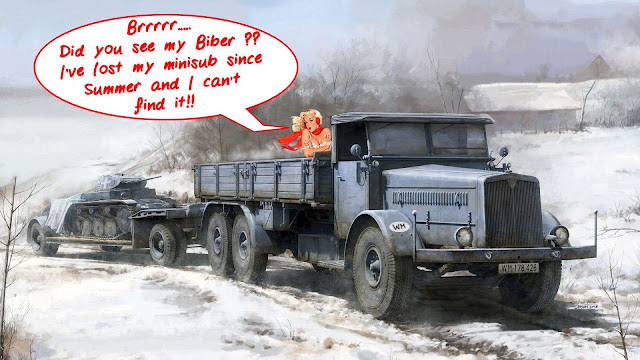 The plant Fahrzeugfabriken Ansbach und Nürnberg AG (FAUN) came into being in 1919 from a merger of the "Fahrzeugfabriken Ansbach AG" brand and the "Nümberger Feuerlöschgeräte-, Automobillastwagen- und Fahrzeugfabrik." The production program included trucks from 2 to 9 tons, with the numbers of each held within modest limits.
FAUN received Wehrmacht contracts for, among others, the Uniform Diesel Einheits 2,5 ton 6x6 truck (700), the Faun L900 D567 6x4 heavy truck 9-ton (also as a tank transporter), truck-cranes (road and rail versions) and heavy wheeled tractors (Faun Zugmaschine ZRS- road and rail versions). 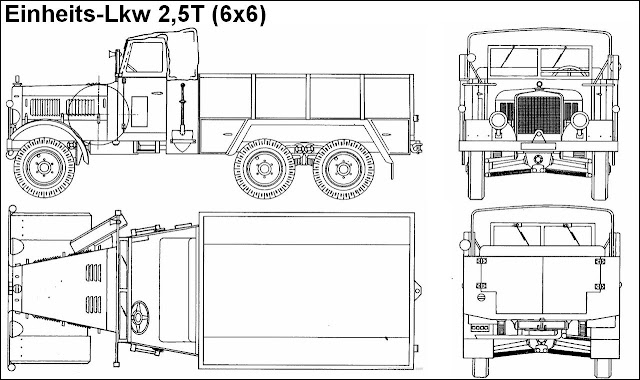 The vehicles normally had a load limit of 9 tons and could be driven by 6- or 8-cylinder Deutz Diesel engines with 13.5 liters and 150 HP or 18 liters and 200 HP. The Faun was one of the heaviest German trucks in service at the time. It weighed 8,800 kilograms and was 9.8 meters long, 2.5 meters wide, and 2.6 meters high. It required a crew of only one, that being the driver. It was powered by a 1,501 hp Deutz F6M5171 diesel engine, and could carry a total cargo load of up to 9 tons.
The Faun had no armor protection or armament, and it had six wheels, four of which were the drive wheels. It's primary purpose was transporting and carrying small tanks and armored vehicles, hence the abnormally long body and powerful engine. The Faun could carry up two small tanks at a time using the trailer Sonderanhänger (Sd. Ah.) 115 Tiefladeanhänger für Panzerkampfwagen 10t (Sd. Ah. 115).

The Faun was produced by a variety of manufacturers, including Büssing-NAG, Vomag, Faun, Fross-Büssing, Krupp and MAN. The Faun was mostly used from the early to mid part of World War II, as it was primarily used to carry and recover small German light tanks such as the Panzer I and Panzer II.
These light tanks became obsolete very fast and the Army had no more need of these early tank-transporters. So, the Faun L900's were transferred to the engineer and transport companies or used as heavy ammunition supply trucks, especially on the long roads in Russia.

For this project, I'll use the amazing injected kit from Das Werke Scale Models, very, very different ( and better, of course...) from the Faun L900 resin kit that I built few years ago. It's almost like comparing a Ferrari with a Clio !!
The building of this resin kit was, according to our modeler friend Alexander Glass (Uschi van der Rosten) one of the factors that motivated Das Werk to inject this amazing and impressive truck. And in a very courteous attitude from Das Werk, I received a complete kit as gift, sent by Alexander. Thank you very much, Gentlemen.
Das Werke staff, you are to be congratulated... The kit is very well injected and features great construction engineering solutions and very elaborate details. The parts fit like a glove, as you will see later in the building of this model... I really hope you continue releasing as good models as this !!

But as I (and Kojak) love to innovate, we decided to build this girl in the 1944s, when they no longer worked as tank transporters, but as heavy transport.
So, this Faun will be my first girl in Kriegsmarine colors. We imagine her carrying a Biber midget submarine in her cargo area. And as she still had breath for more load, she will be pulling a trailer Sd.Ah.115, loaded with magnetic mines for an attempt of counterattack to the Allied landings in Normandy.
Therefore, to complete the project (it's a commission for a great friend of mine ...), I'll use the Italeri U-Boot Biber kit (# 5609) and a Cammet resin kit (CAMB35005) for the EMC Mines.

But let's talk less and work harder !!!
First of all, the concept: Both the trailer and the truck have the capacity to carry the Biber with its full armament without any overweight problem. The options would be either to transport the Biber in the trailer or in the cargo area of the truck. At a glance, the trailer transport would perhaps be the first choice, but by detailing the transportation (see drawing below), the positioning angled of the boat made me choose to transport the midget in the Faun's cargo area. Mechanically, it seems more viable and safe to me... 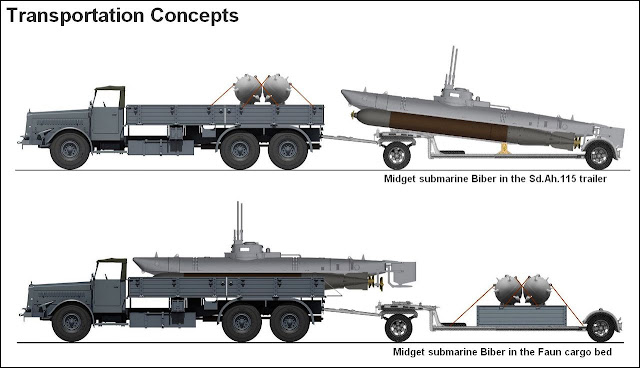 But what really made me decide on the option of transporting the U-boot in the truck was this photo below:
Notice that the Biber is in the trailer of this Ford tractor, in the horizontal position. And this "horizontality" of weight and mass distribution that was the deciding factor in choosing to transport the minisub into the Faun's cargo area. BINGO!!
Decided that, now is to build the characters of our little show...  Dive, dive, dive!!!
Starting at the beginning ... Chassis, with extreme care with the alignment of the stringers ...

While the chassis and the cargo bed dry up, let's start building the trailer ... And then it got complicated: the instruction manual and the part trees don't talk to each other. The letters are different. In Sprue it is spelled "H" and in the instructions it is "A". Less bad than the numbers are equal ...The chassis Instruction Manual is very confusing ...

My advice: Look and check the steps VERY CAREFULLY !!! There are parts that are not reported or shown in the graphic drawings ... Das Werk, the Sd.Ah.115 manual needs an URGENT overhaul !!
Here's an example of the instructions booklet mess )see below): The manual indicates that A19 parts are glued to the front of the trailer, but A19 parts (the cranks) are glued to the squared points of the load tensioners ... and this step is described only in the end of booklet. And these load tensioners are usually the last to be placed in the kit ...

Indeed, the biggest problems with interpreting the instructions are in the trailer's building. A great initiative from Das Werke was to print QRCodes in the instructions, that direct the reader to the Das Werke website with short explanatory films... But unfortunately, these films do not have some of these little details...

The rear axle features a trick as well. Do not use A25 parts yet, as they will be the pins that secure the axle to the rear suspension. Leave these two pins for the final step.

As I said, instructional issues are revealed in the trailer. When building the front portion of the trailer, parts A18 are hollow. But in the instructions nothing is mentioned to "plug" the cavities of the pieces. They are locking wedges. While inspecting the sprue trees, I came across the "covers" of these parts But the assembly manual makes no reference to them ...

I decided to transform the rear door of cargo area in movable, in case your colleague wants to change the load on your truck. As the parts are very well injected, the hinges can be drilled with thin drills (0.4mm) and we use a copper wire of this thickness as the hinge pin ...

When Das Werke's Faun was released in the market, some reviews criticized the shape of the front fenders. In the Missing Lynx forum there was a debate about the curvature of the fenders and the photos shown as an argument actually present this discrepancy. I'm not a rivet-counter, but I like working on a kit... In my opinion, this detail is minimal (especially since I built a Faun with an old, very old resin kit, that was a real brick ...), but as modeling is fun, let's have fun. Watch now how to do a small plastic surgery with Dr. Kojak !!

But I started building the mines that will be loaded by the trailer ... The Cammett resin kit is a beauty !!! 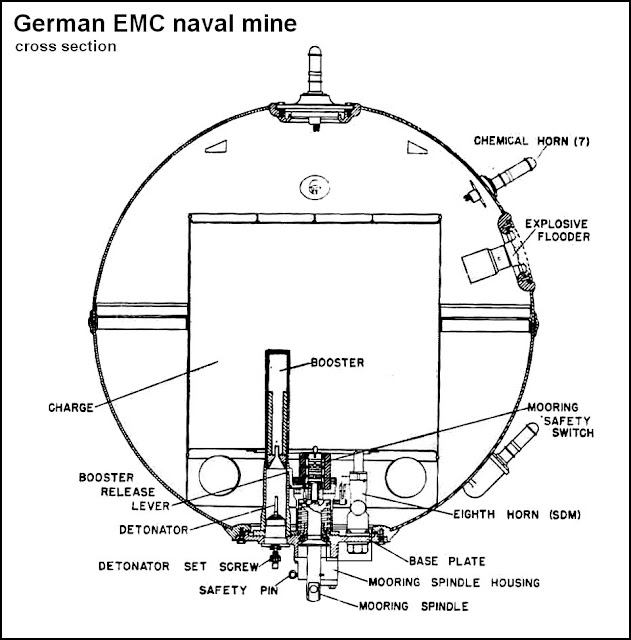 But since these mines will be in "transport mode", the fuses cannot be characterized in this way, as this is the "combat mode". I have to remove the fuses, or in naval jargon, I have to defuse the mines.
There is a difference between not installing fuses and detonators (transport mines) and defuse mines (done in the field): When in transport, fuses are covered with a small shield.
But when the mines are defused, the spindle is completely removed, leaving only the recess where the fuse is threaded.
In our case, how the mines are being sent "virgins"to the front, the fuses will be protected by a round cylindrical cap.
This matter decided, it's time to relax a little, before the mine defuse surgery !!
And Kojak defused the mines!!  Great sucess!!
My idea is build a "sub-body" to be transported by the trailer. Something like a 3 tonne truck lcargo bed. Something like this:

We are really moving towards the final stages of the project: Time to take care of the crib of the midget submarine Biber: 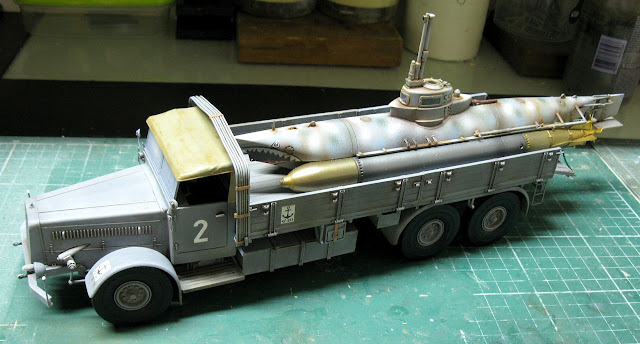 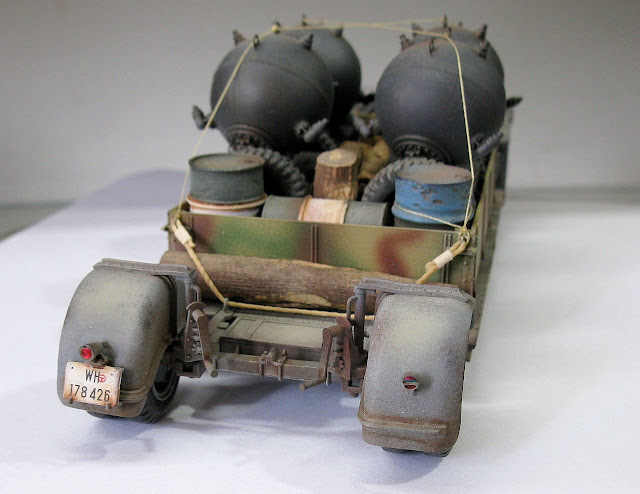 And the Faun under final weathering. This vehicle will not be too dirty as the idea is that this composition is moving along paved highways for delivery of your cargo. 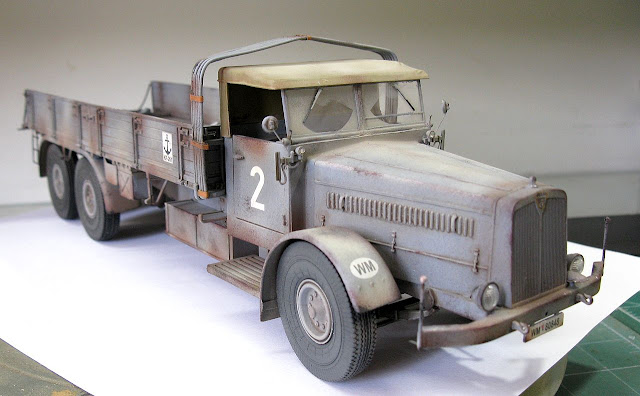 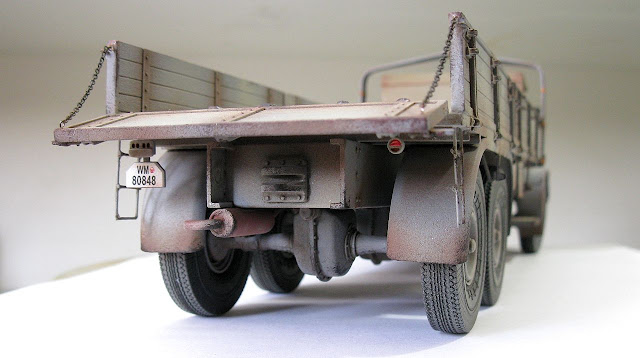 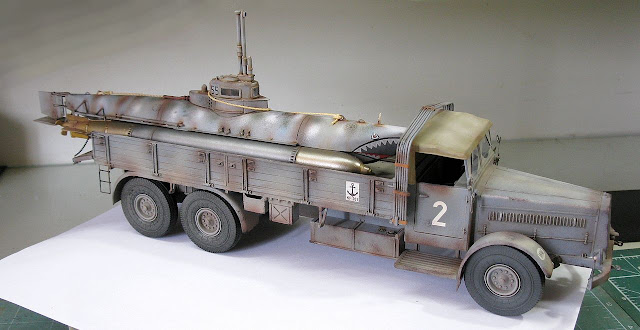 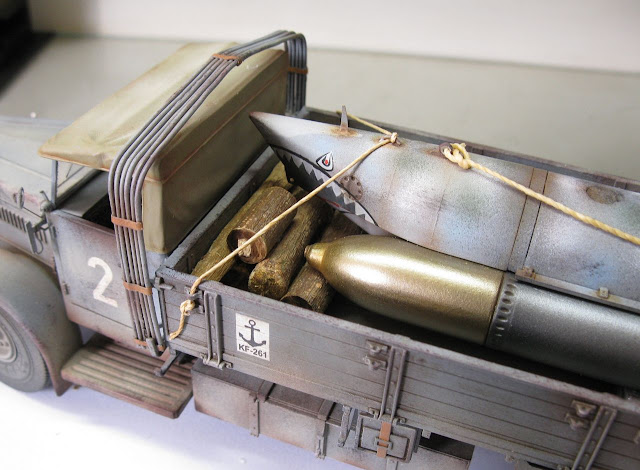 And finally, the complete composition of the project was completed: Here is the Faun L900 D567 6x4 heavy truck from K-261 Flotille (Kriegsmarine) carrying a Biber midget submarine in its cargo area and pulling an adapted Sd.Ah.115 trailer with four ECM mines. This composition addresses to Fécamp, France, in August 28, 1944. 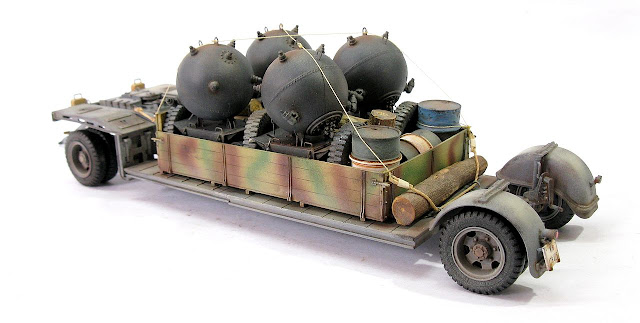 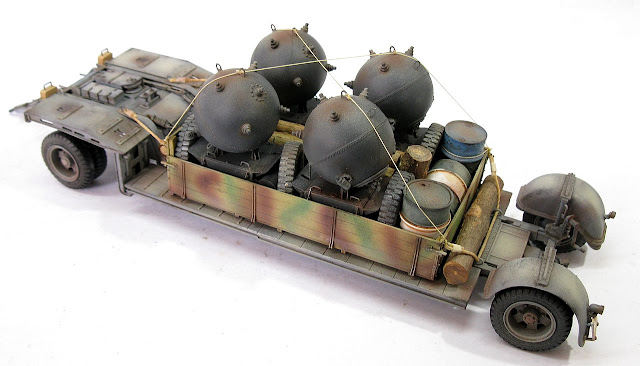 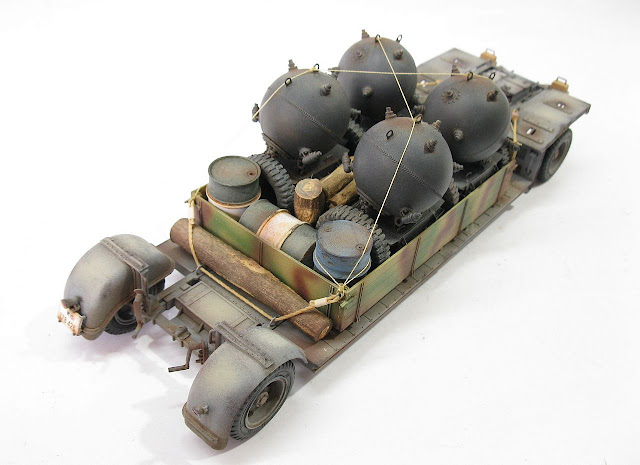 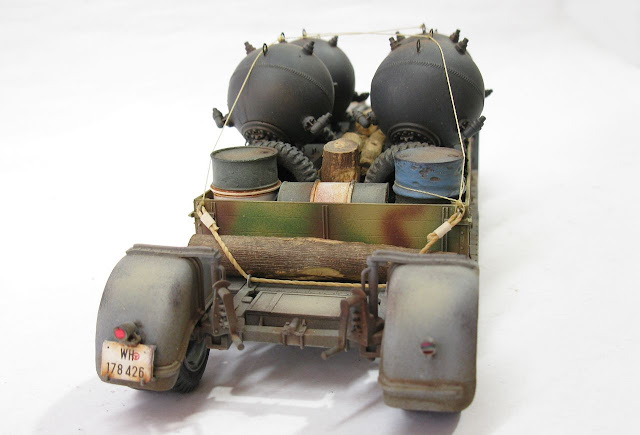 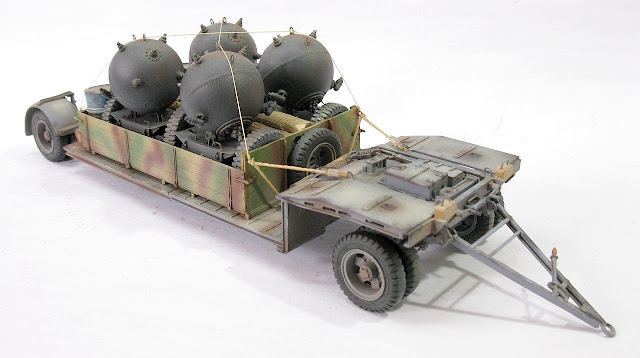 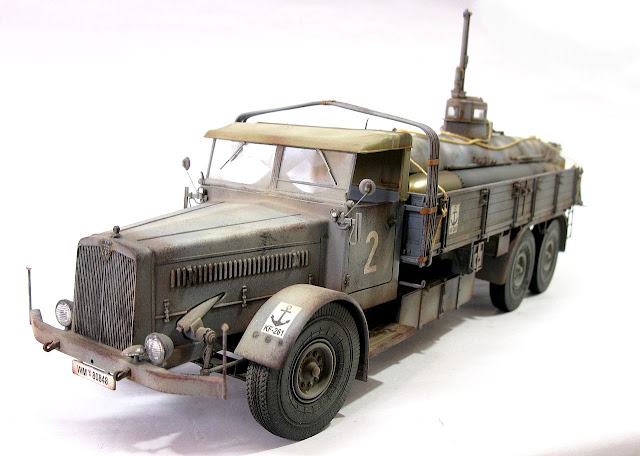 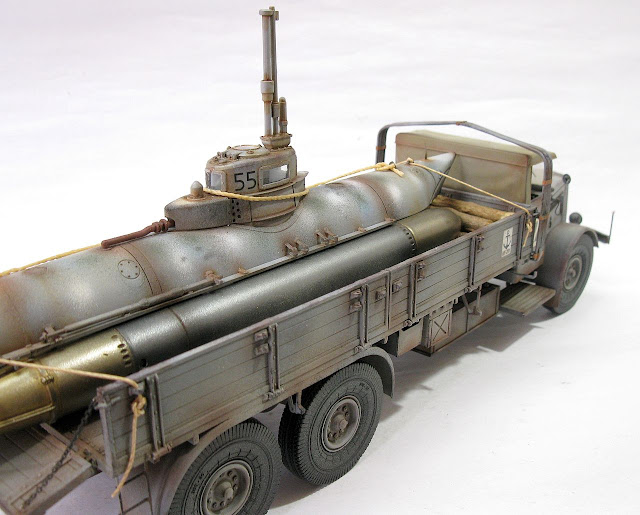 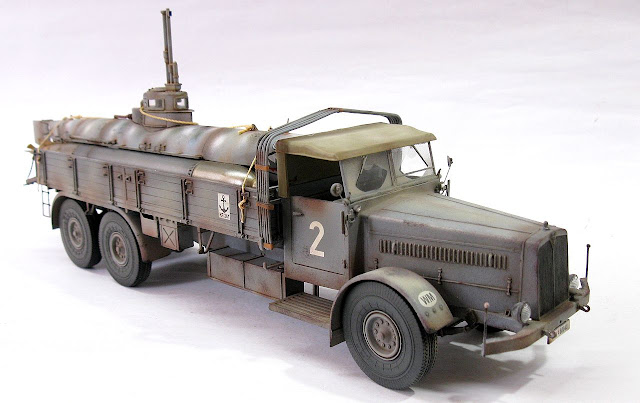 The Das Werk kit was a very pleasant surprise. A kit with perfect fit and fantastic engineering. Parts and subassemblies simply fit together like a glove !! One of the nicest build kits I've ever had in my hands. Congratulations to this young company. The instruction book with some confusing details and steps can be improved. And for God's sake, plastic tires ... not vinyl !!! And a suggestion for Uschi van der Rosten: make a decal sheet for the Faun's cargo area, too... I didn't use the trailer's "wood" decals because it would look different from the truck with "wood" painting ...
See you, soon, Gents!!
às setembro 07, 2019