Tankers !!!
This girl appeared in another building before, but as supporting actress and no as leading actress. So, it is more than fair write a case report about this British lady with a flashlight!!!
Matilda Mk II Infantry Tank A12 CDL (Canal Defense Light):
History:
The Canal Defence Light (CDL) was a British "secret weapon" of the Second World War. It was based upon the use of a powerful carbon-arc searchlight mounted on a tank. It was intended to be used during night-time attacks, when the light would allow enemy positions to be targeted. A secondary use of the light would be to dazzle and disorient enemy troops, making it harder for them to return fire accurately. The inaccurate name Canal Defence Light was used to conceal the device's true purpose. For the same reason, in US service they were designated the T10 Leaflet Tractor.
The CDL compcept had its improbable origins thousands of miles away in the hot sands of Egypt. The German advance had put the safety of the Suez Canal in Jeopardy. The problems of defending it against a night attack made the army examine methods of illuminating the canal, bearing in mind the obvious vulnerability of searchlights. As such a device was already under consideration, it was given the code letters CDL which stood for Canal Defence Light.
The idea of attack by illumination first occured to the late commander Oscar de Thoren, RN, in 1915. His project was to use powerful projecters on motor vehicles (later tanks) to enable them to move over an illuminated field at night time. The intention was to obscure everything advancing behind the illuminated front and so completely dazzle the enemy as to render aimed fire on his part impossible. After his idea was turned down by the War office in 1917 and again in 1922, de Thoren was granted permission to submit it to the French Government. Meanwhile in England it was made public property in a thriller entitled "Eye for an Eye".
In 1933 a syndicate, known as the de Thoren Syndicate, was formed, Mr Marcel Mitzakis (a British citizen of Greek parentage) was its manager. Major-General J.F.C. Fuller was its technical advisor, and the late Duke of Westminister financed it.
The first trial in France took place in 1934, and the second, with improved apparatus, at Chalons in 1936 which was attended by War Office representatives. It resulted in the War Office requesting the Syndicate to stage a demonstration in England. This took place in february 1937 on Salisbury Plain and was satisfactory that the War Office ordered three sets of the apparatus for further trials. Exasperating delays folowed, and it was not until the night of June 7/8 1940, that the final trial took place at Lulworth. Ten days later the War Office took over the project, and put in hand immediate construction of 300 projector turrets. The tank's normal turret was replaced with a cylindrical one containing both a 13 million candlepower (12.8 million candela) searchlight and a machine gun.

The CDL turret was divided into two compartments. The operator sat in the left hand one while the optical equipment occupied the right hand side. 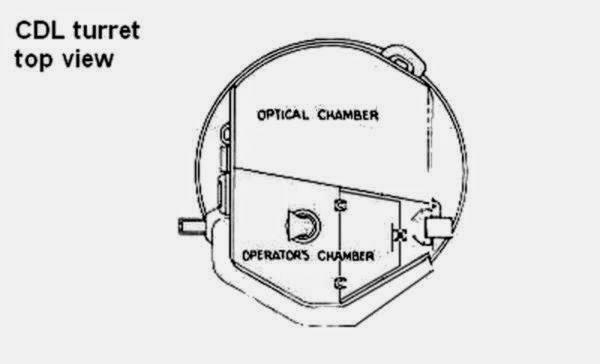 The 13.000.000 candlepower light came from a simply built carbon arc mounted on a cradle in the center of the light compartment, the power being supplied a 9,5 Kw generator driven by a seperate auxiliary engine in the case of the Matilda and Churchill tanks. The intense beam of light was picked up by a reflector which was a parabola in its vertical axis and ellipse in its horizontal axis to produce a beam which converged and subsequently diverged from a nodal point some 60 to 70 inches from the source of light. This beam was reflected half way down its primary focus by an ordinary flat reflector of polished aluminium. The effect of the two reflectors was that the arc lamp could be mounted behind armour and the beam was emitted at the point where the beam converged, which was through a slot two inches in width and 24 inches in height in the front of the turret. Although this slit was vertical the light struck the target area horizontally, this was achieved by the use of the parabolic mirror. The addition of the alloy reflector prevented the mirror being shattered by the machine gun or small arms fire and, in fact, it was found that even after repeated hits, the light intensity was hardly affected.
The angle of the beam dispersion was 19 degrees which meant that if the CDL tanks were placed 30 yards apart in line abreast, the first intersection of light fell about 90 yards ahead and at 1000 yards the beam was 340 yards wide by 35 feet high. This formed triangles of darkness between and in front of the CDL's into which could be introduced normal fighting tanks, flame-throwing Churchill Crocodiles and infantry. 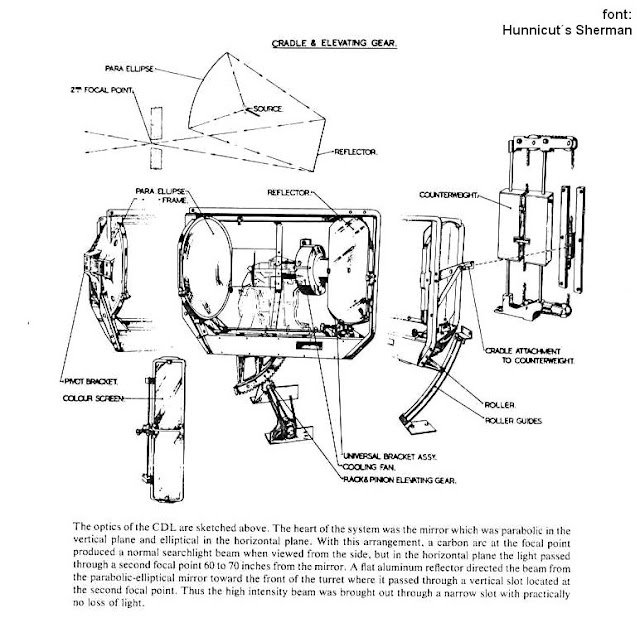 Blue and amber filters allowed the light to be coloured as well as white. A shutter could flash the beam on and off up to twice a second. It was found the blue light caused the CDL tank to appear to be at a greater distance, and blue and amber light beams from two CDL tanks could combine to illuminate a target with white. A flashing beam would further dazzle and disorient enemy troops by not giving their eyes a chance to adapt to either light or darkness.
The disadvantage of the Matilda and Churchill tanks had been that the main armament was lost when the CDL turret was installed. In 1943, when the American Grant became available, it was found that the CDL turret designed for the Matilda could be fitted with little modification, enabling the tank to retain its hull-mounted 75 mm gun.
The Matilda tank was later replaced by the US M3 Grant, which was superior in several ways. It was a larger, roomier and better-armoured tank, and also faster and better able to keep up with tanks such as the Sherman. It was armed with a 75 mm gun mounted in the hull rather than the turret, which bore the searchlight. A dummy gun-barrel fitted to the turret made it resemble a normal M3 tank.
The project was shrouded in secrecy. It was tested during Exercise Primrose in 1943 at Tighnabruaich, Scotland; it was concluded that it was "too uncertain to be depended upon as the main feature of an invasion".
Units that were equipped with CDL:
The 11th Royal Tank Regiment was raised in January 1941 and designated for the CDL role in May 1941. The unit trained at Lowther Castle near Penrith, and were based at Brougham Hall, Cumberland, spent 1942 and 1943 in the Middle East without seeing action, and returned to the UK in April 1944. They landed in Normandy on 12 August 1944, and saw no action until 29 September 1944 when they were ordered to transfer all their equipment to the 42nd and 49th Royal Tank Regiments, and were retrained to operate the American amphibious LVT-4, known by the British Army as the Buffalo Mark IV.
In their turn, the 42nd and 49th Royal Tank Regiments were largely inactive for the remainder of the war, when all three units were disbanded after the end of hostilities.
Battalions of the American 9th Tank Group trained using the Grant variant of the CDL tank at Camp Bouse in the Arizona desert. before deployment in the European Theatre of Operations. The Americans used the M3A1 Lees CDL, called Leaflet Tractor T10, in an attempt to disguise their true mission. All CDL tanks program was surrounded by much secrecy. The secret was so much that detracted from its use by the allied forces. The men who manned the tanks T10 CDL called their tanks as Gizmo Tank. Served in Medium Tank Battalions 701, 736, 738, 739, 740 and 748. In 1945 were used for illumination and distraction duties during the crossing of the Rhine.
The system was highly secret as surprise was considered essential to its use. This hampered its employment as commanders were often unfamiliar with it and did not consider it when drawing up plans for attack.
The first operational use of CDLs in the Second World War was by the US 738th Tank Battalion (SPEC) to illuminate the Rhine after the capture of the bridge at Remagen. Thirteen 'Leaflet-tractors' had been issued to the unit on March 1 and, with the capture of the bridge, they were rushed to provide defence upstream prior to the construction of the ponton bridges and defence boom. Additional CDLs were called for and, altogether, three companies were employed in the protection of the bridgehead during the hours of darkness. Later the CDLs were replaced by conventional searchlights because the constant operation of the Leaflet-tractors was costly in fuel and carbon rods for the arc. 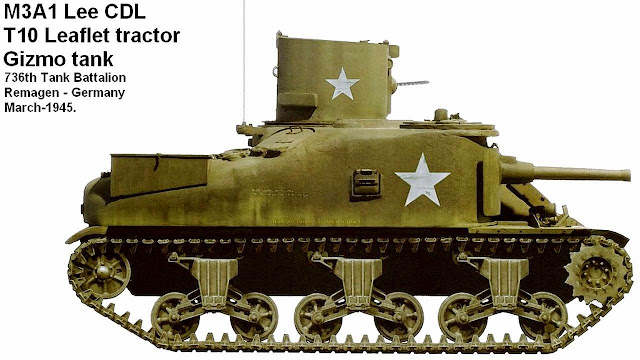 The first British use of the CDL was later in March during the major crossing of the Rhine. There, the CDLs at Rees were provided by B Squadron of 49 APC Regiment and were employed giving 'movement and direction light' to the assault parties on the night of March 23. The Grant CDLs drew considerable enemy fire and one tank was destroyed.
Although jerry-can booms had been set up across the river to protect the five Bailey bridges, from March 25 to April 6, the CDLs were used to illuminate the river against German sabotage attempts against the floating bridges. Three frogmen were exposed and captured arid a considerable number of logs strapped with explosives were spotted and exploded in the blinding light - During this stage German aircraft attacked the tanks and they were frequently shelled although without loss. Then, on April 29, as part of HQ 33rd Armoured Brigadeof VIII Corps, B Squadron's CDLs provided movement light for both British and American troops crossing the river EIbe at Lauenburg and Bleckede.
Later, the battle moved East and the CDLs were used to illuminate the bridges for the benefit of engineers carrying out maintenance. Conventional searchlights would have been more suitable, but none were available. The CDLs were eventually replaced by captured German searchlights.
The only surviving CDL-equipped Matilda tank is in the collection of the Royal Armoured Corps Tank Museum at Bovington, Dorset, in Britain.
One CDL-equipped M3 Grant is displayed at Armoured Corps Museum, Ahmednagar, in India.
Specs: 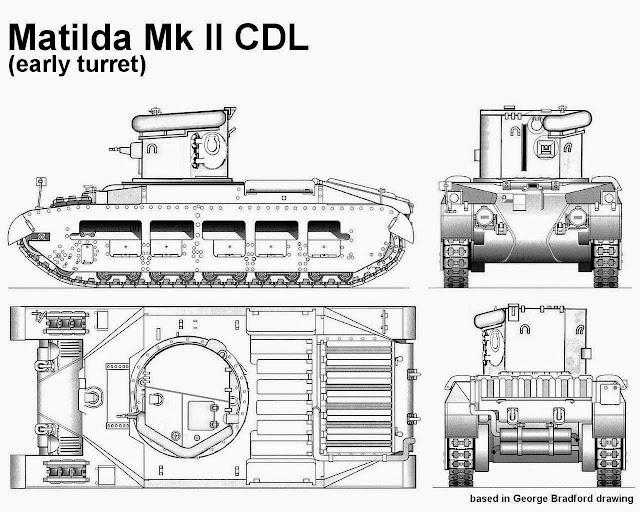 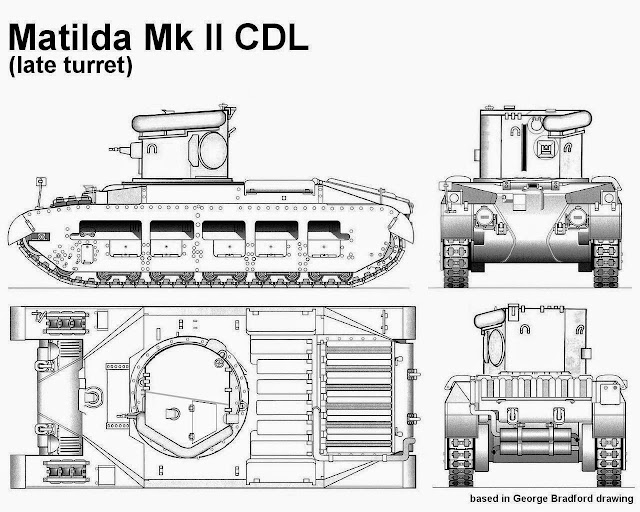 The kit:
When I built this kit (2008), I used a scrap kit from Tamiya (tank) and a conversion kit from Verlinden (turret).
My first building of this kit was to use the scrap kit of the tank and transform the Verlinden turret (late) in the Early model: 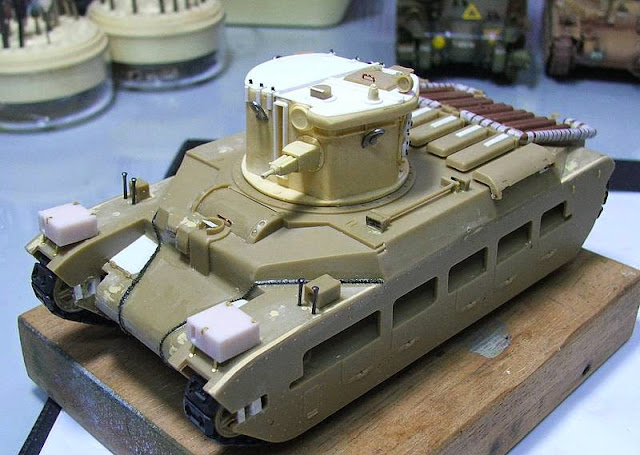 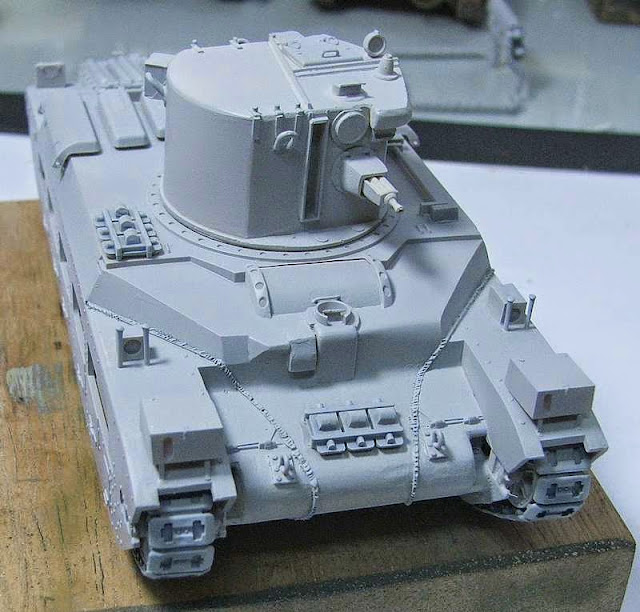 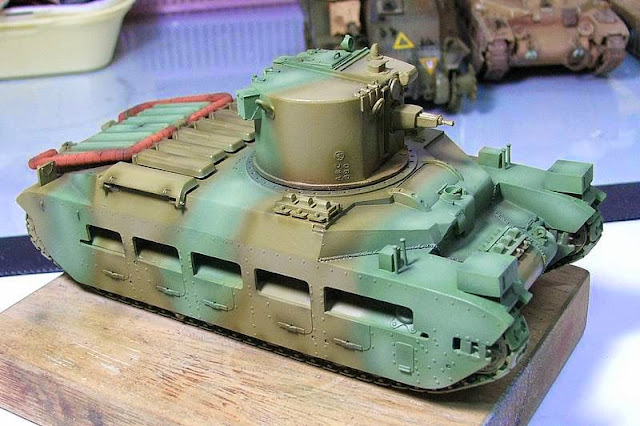 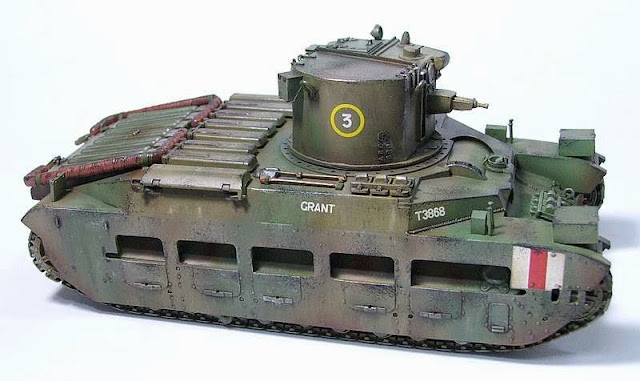 After that, I discovered (2010) that the Verlinden turret was all wrong!!  The roof was flat (like many, many drawings and profiles at that time...) See some examples of references with CDL "flat" turrets below... 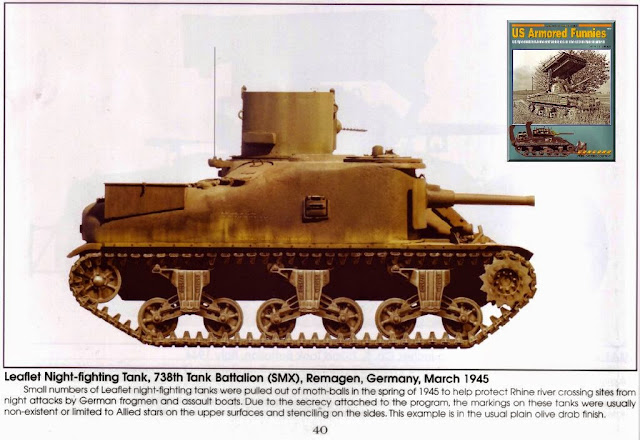 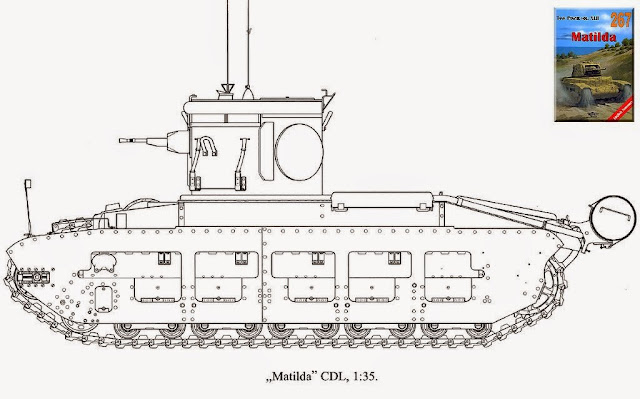 I´m not a "rivet counter" ( and hate that...) but such a gross error could not ruin such a nice kit. And what was worse, I had built an M3 Grant CDL with damn flat turret Verlinden:

I decided to turn a flat Verlinden turret in the correct form (with sloped roof) and make a master for me (you may have seen this step in my Matilda Crane kit)... Look below:
After that, I transformed a late Panzerserra turret in early model, sanding the details of the turret's top and using parts of my first Matilda CDL parts:
...and to match with the Matilda crane kit, I repainted the tank with new markings: GRANT. 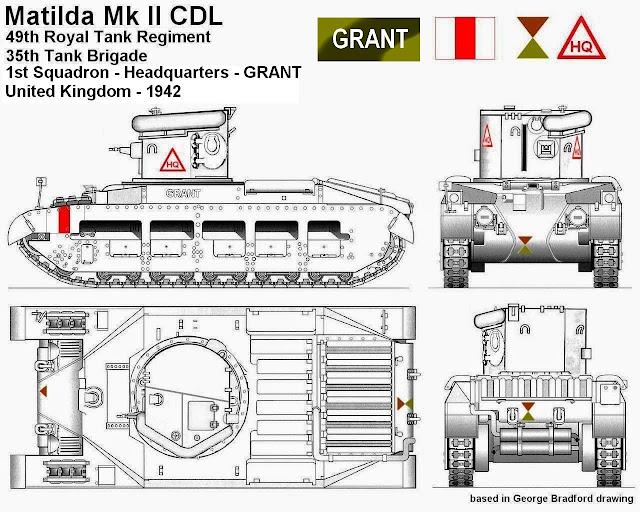 Correcting the art and the Theatre of Operations; 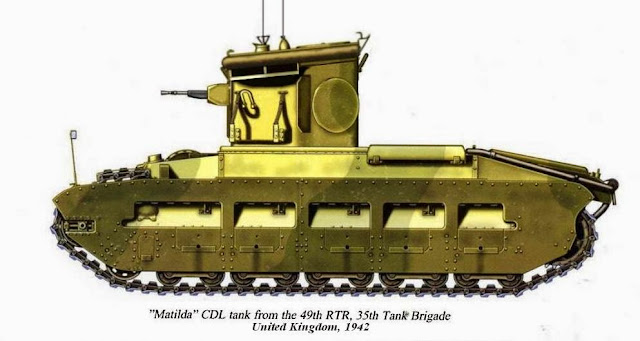 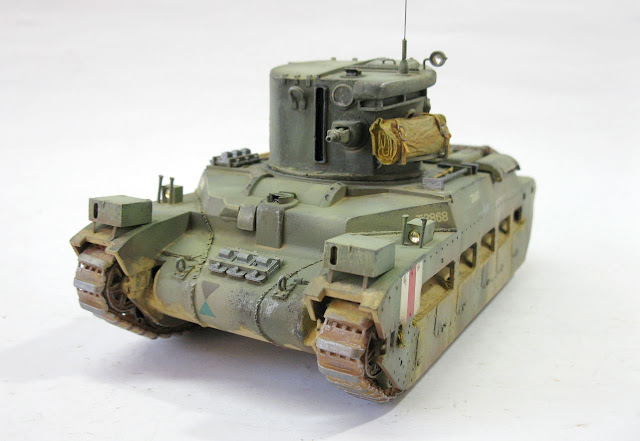 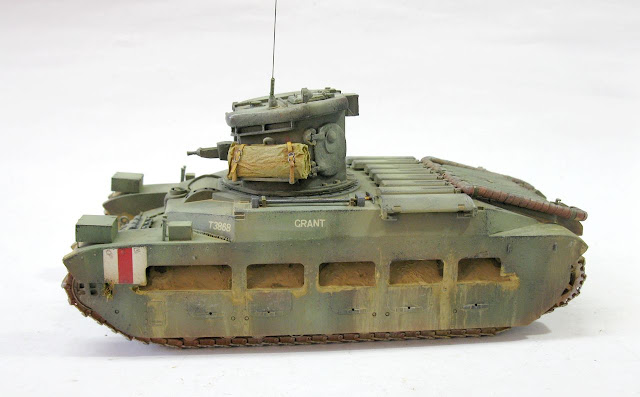 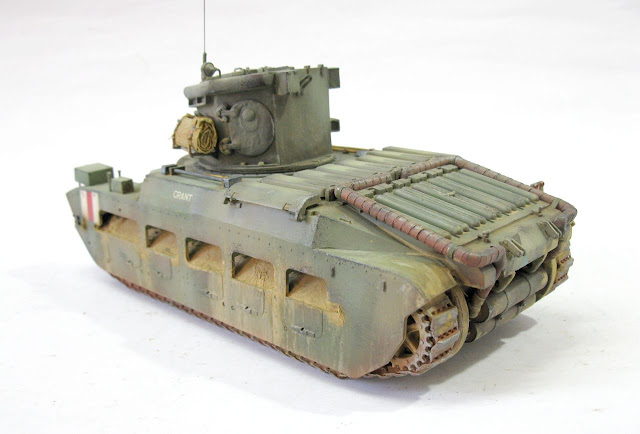 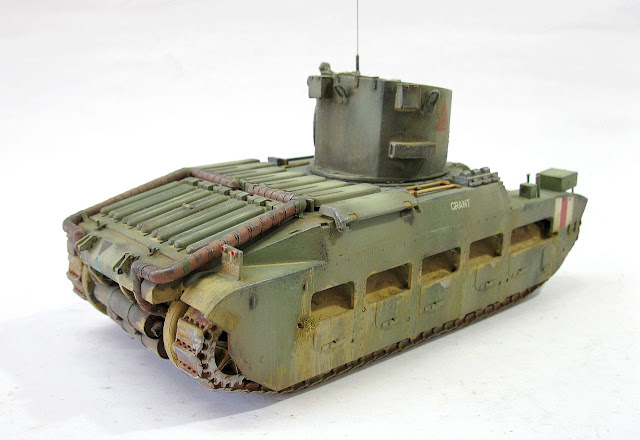 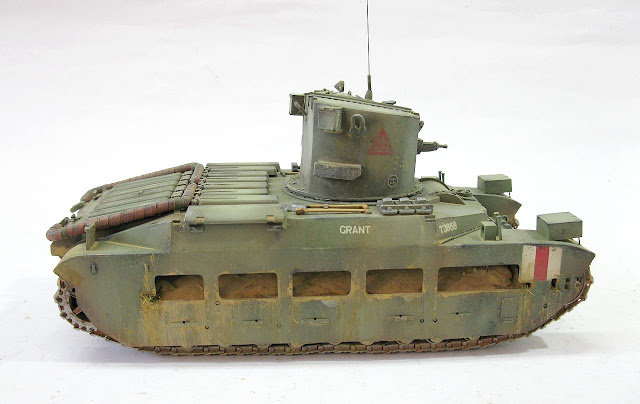 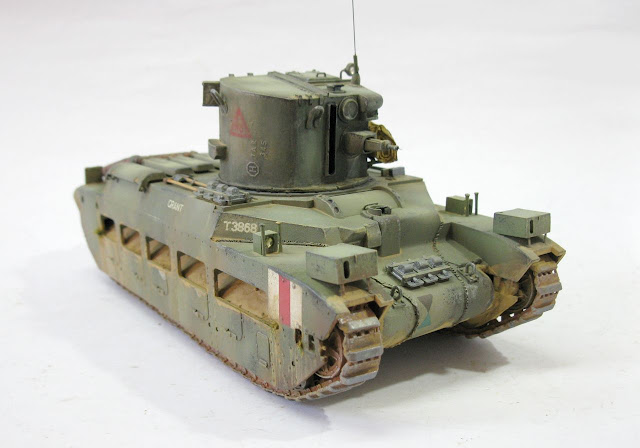 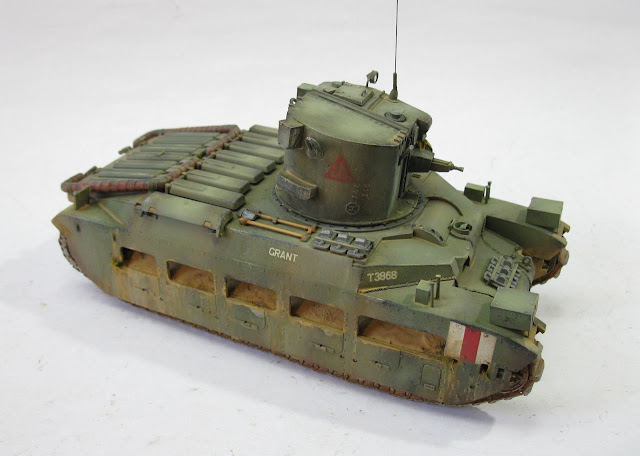