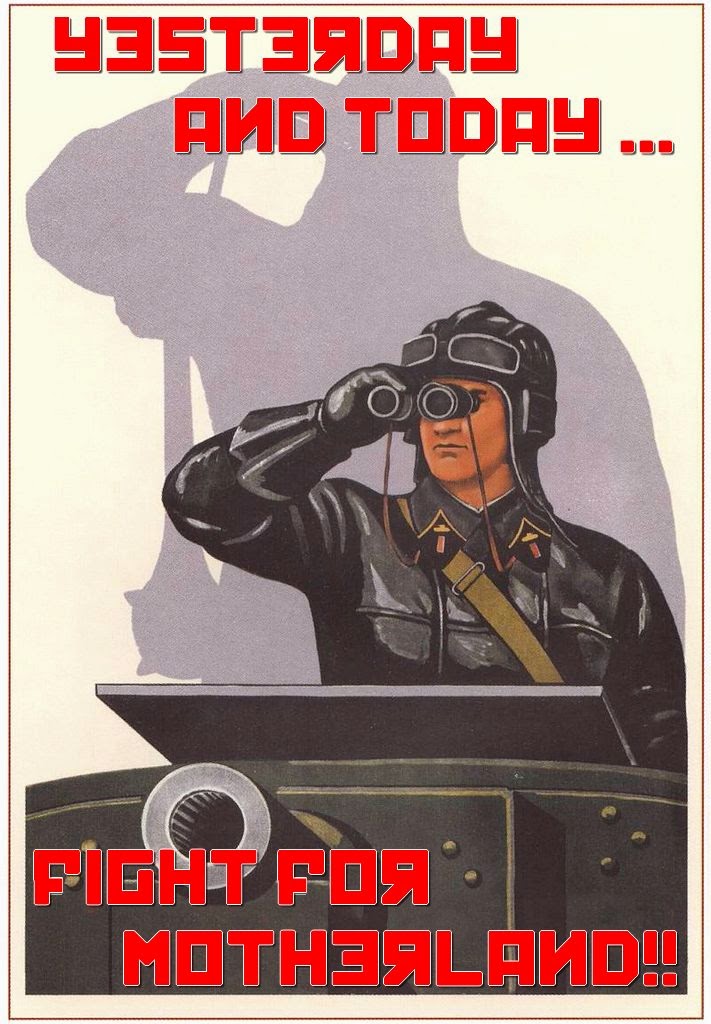 The tank was powered by a standard GAZ (Ford) engine and was cheap to produce. Buoyancy was achieved by the large-volume hull and large fenders. In water, the vehicle was propelled by a small three-bladed propeller mounted at the rear. 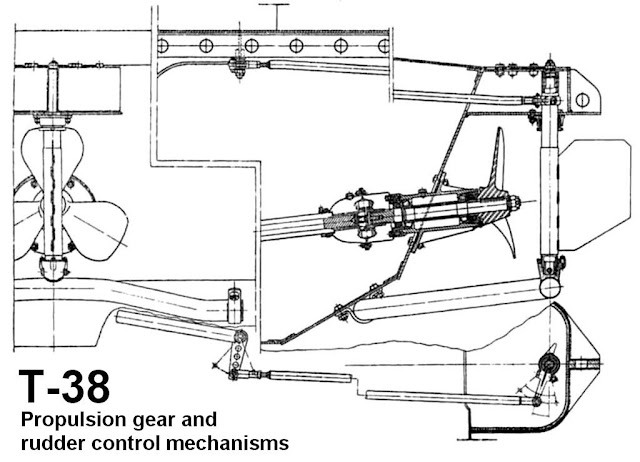 The tanks were intended for use for reconnaissance and infantry support. As a scout tank the T-38 had the advantages of very low silhouette and good mobility through its ability to swim. 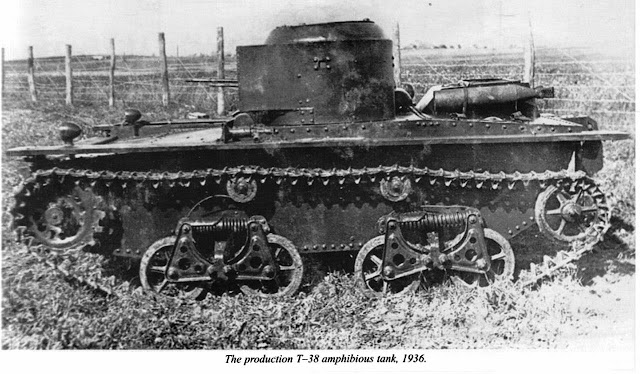 The T-38 was also intended to be air-portable; during the Kiev maneuvers in 1936, the tanks were transported by Tupolev TB-3 bombers, mounted under the fuselage.
Infantry battalions were each issued 38 T-38s, with 50 being designated for each airborne armored battalions. However, the thin armor and single machinegun armament made the tank of only limited use in combat while the lack of radios in most T-38s was a serious limitation in a reconnaissance vehicle. The T-38's limitations were recognized, and it would have been replaced by the T-40, but the outbreak of the Second World War meant that only a few T-40s were produced.

Around 1,500 T-38s were built, illustrating the importance of amphibious scout tanks to the Red Army. Some were up-gunned with a 20 mm ShVAK gun, and designated the T-38 SZ or ShWAK. 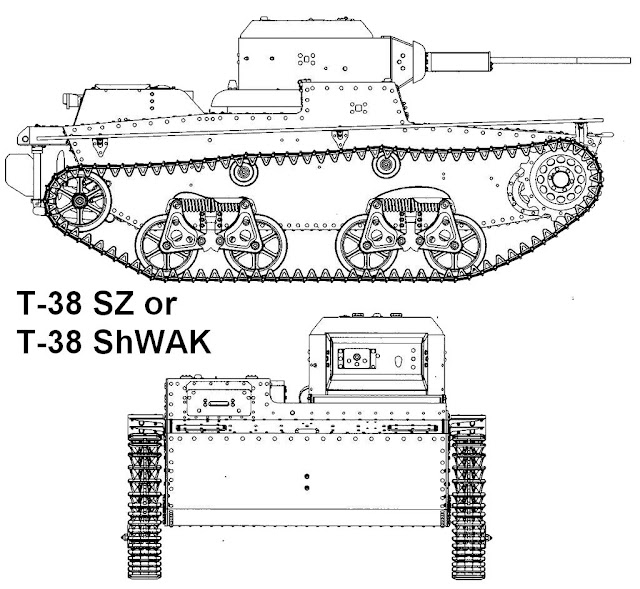 Service history:
The tank served with the Red Army in the Winter War with Finland in 1940, but was unsuccessful due to its light armament and thin armour, which was easily penetrated by rifle and light machine gun fire.
In the confined terrain of Finland, the tank was a real deathtrap; it also did not do well in the early stages of World War II, and large numbers were captured by the Germans during Operation Barbarossa. The German Army did not generally use captured T-38s as gun tanks (unlike captured T-26s, T-34s, or other more valuable vehicles), but as support vehicles in the rear. It is reported that some were re-used by converting them into self-propelled anti-aircraft artillery, mounting a 37 mm anti-aircraft gun on the T-38 chassis, although this would seem to be a very large piece for the chassis. .

In 1941 the T-38, together with the T-37A, served in the reconnaissance subdivisions of tank divisions and allmost all were lost by the end of this year.  The T-38 was rarely seen in direct combat after 1941 and mostly relegated to other roles such as artillery tractor, although it was reported to have been used in the Dnieper River crossing of 1943.
However, the last combat employment of T-38 took place in 1944, when one battalion of these machines together with the battalion of the equally amphibian Ford GPA participated in fighting the Finnish Army at the Svir river.
During World War II, the main amphibious scout vehicle of the Red Army was the Ford GPA amphibious jeep, an open unarmored vehicle provided through Lend-Lease.
Production ceased in 1938, but.started again in 1939 with the improved T-38M, which used the power train and engine of the GAZ-M1. In all, from 1936 until 1939 were finished 1340 T-38 of which an even lower proportion were fitted with radios than in theT-37A, only 165. 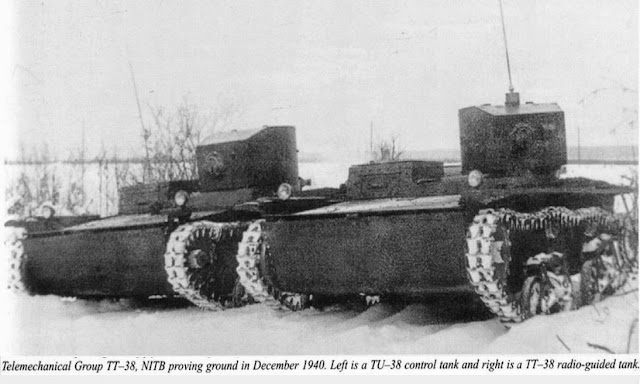 Another movie (shorter): a T-38 tank running with a great walk-around and interior details: 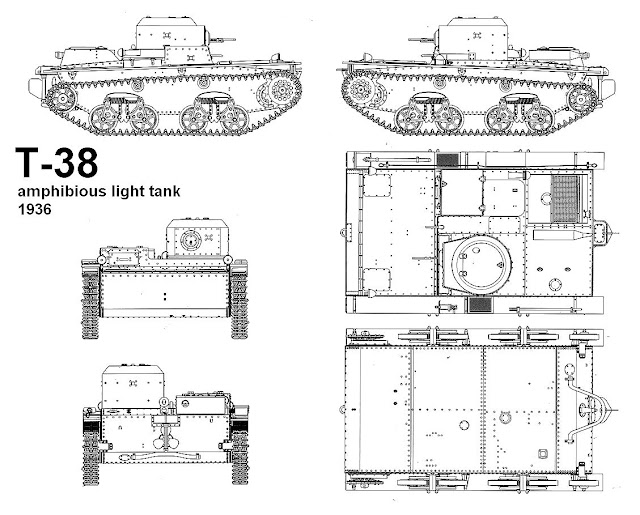 The kit:
As I said, I found a packet of old kits packed in bags (bag-kits) on my catacombs, and one of them is this baby: T-38 Russian "small" amphibian tank, from Cooperativa :
Gents...the kit is unique !!!! The bogies were molded in one piece !!! Check the parts is almost a religious experience ...  But, let's have some fun...
The icing on the cake: the bogies molded in a single part !!!  Jesus !!!
My goal: improve the bogies with metal springs (made with cooper wire, just like in my T-37A project...) and open the holes in the bogies arms...

The turret simply fits into the hull without any locking. As I've had an accident with the fall of a turret, I decided to make a locking system that keeps the movement.
I the punched the geometric center of the plates, wherein the bigger orifice is located on the hull
and smaller (for the small screw) inside the turret.
I opened a hole in the bottom of the hull for the screw, along with the Phillips screwdriver.
The screw crossed the plasticard of the upper hull and held the plate of the turret, preventing its fall, but keeping its rotation.
...and, to complete, I decided to replace the plastic machine gun (just awful) by a needle, cooper wire and aluminum foil.
I made the top of the tool box with aluminium foil, too 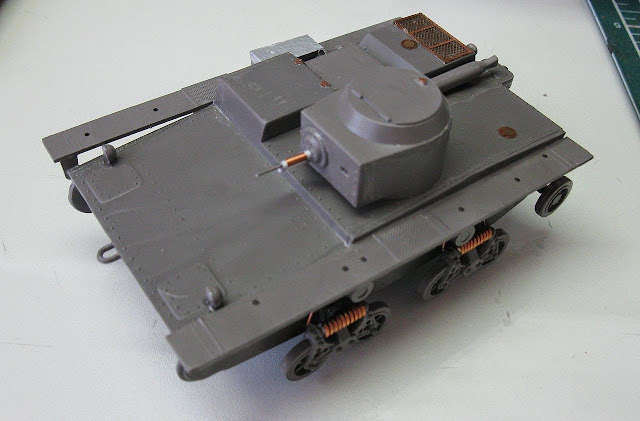 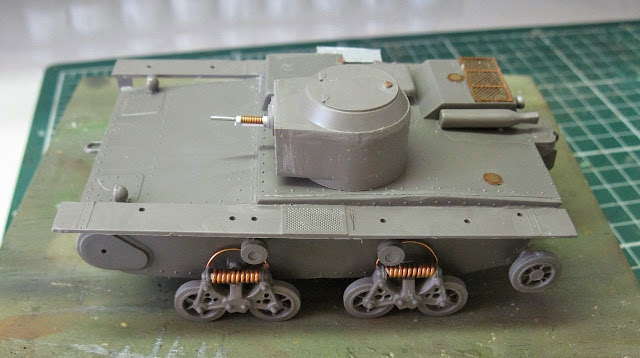 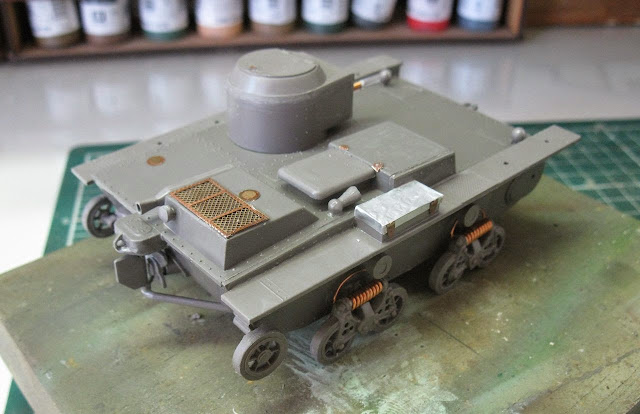 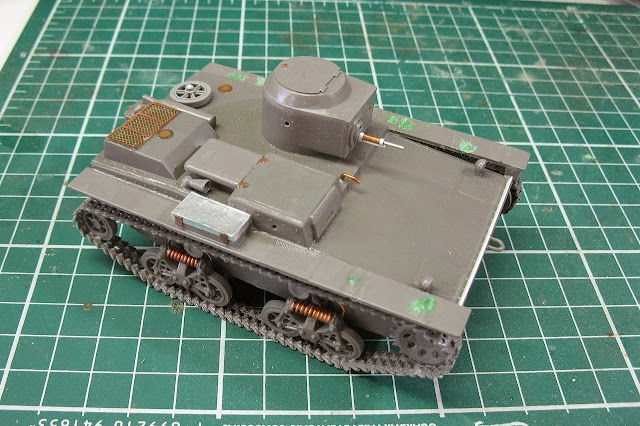 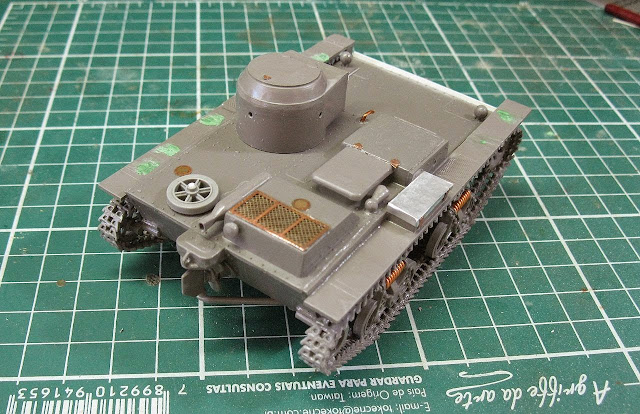 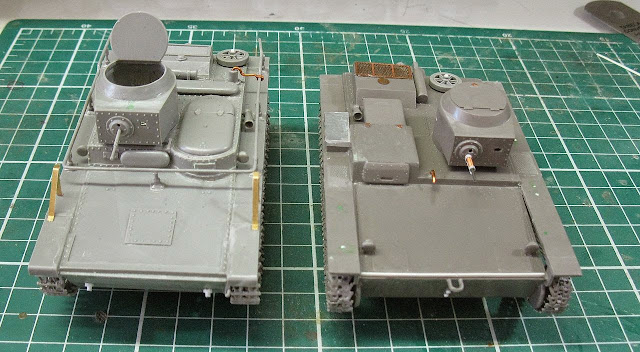 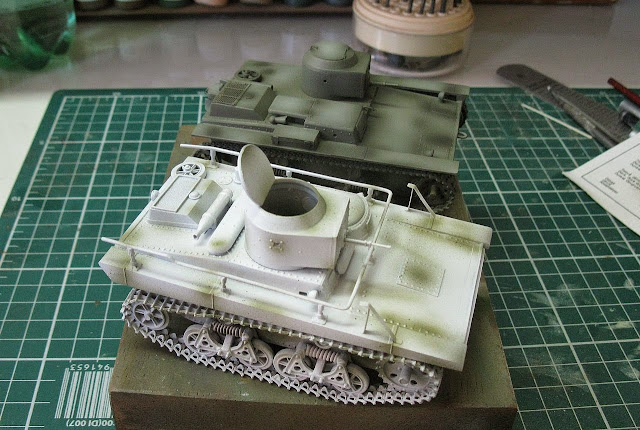 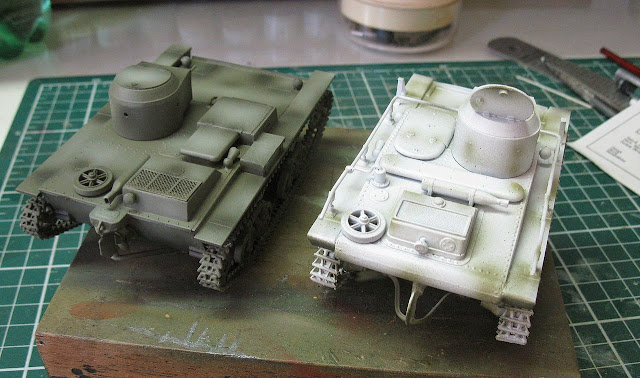 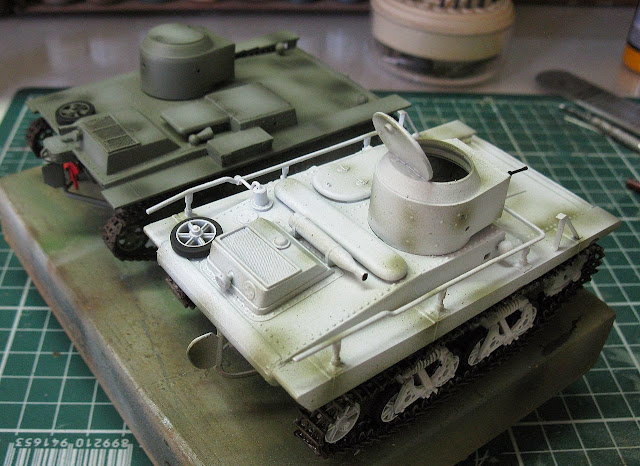 In honor of my great Finnish friend Maximex, this girl will present the colors of Finland, in the summer of 1942. 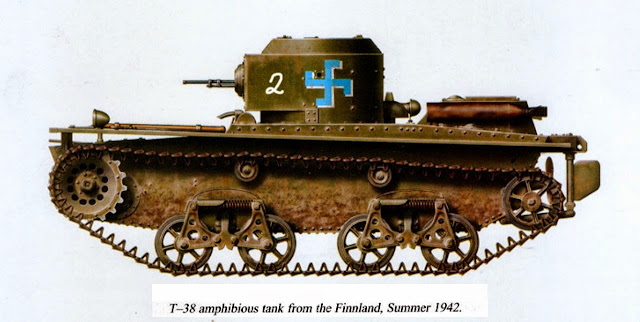 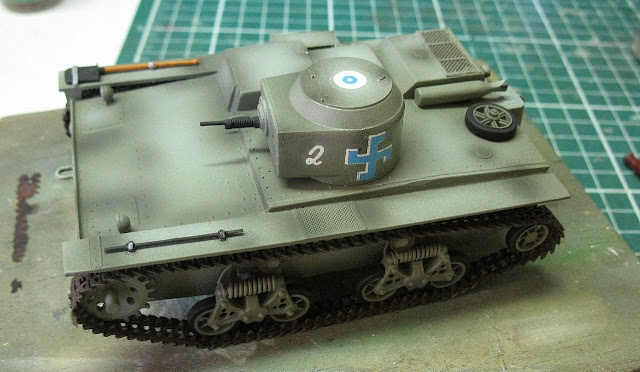 Well, Gents...The little girl was done, ready for action. As I said before, the kit was horrible, but the project was very enjoyable to run ... and the goal of the hobby is precisely that: fun!
Know the T-38 Soviet amphibious scout  tank with Finn markings, in Summer, 1942. 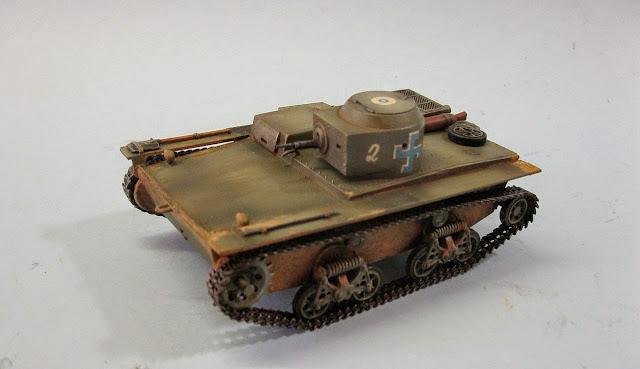 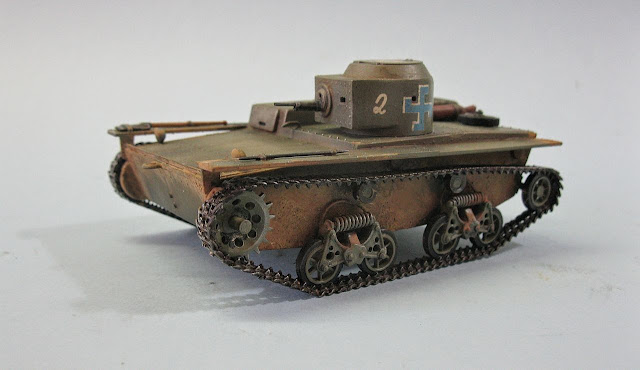 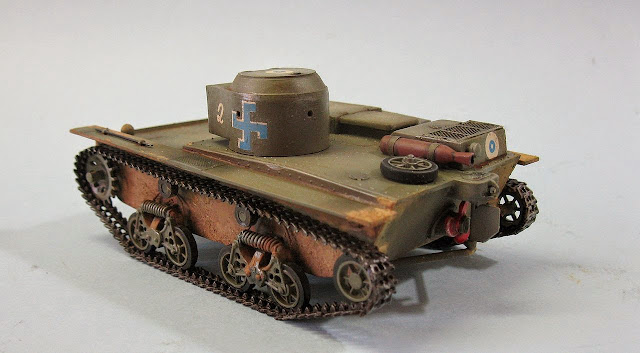 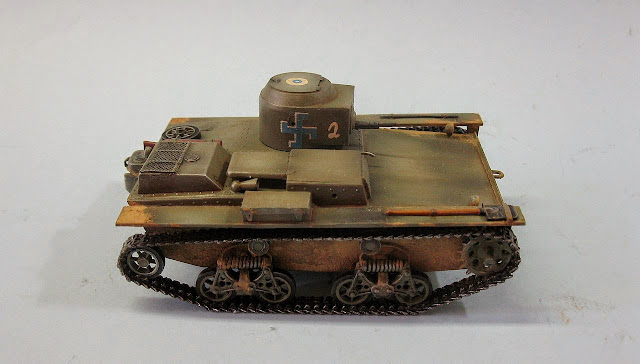 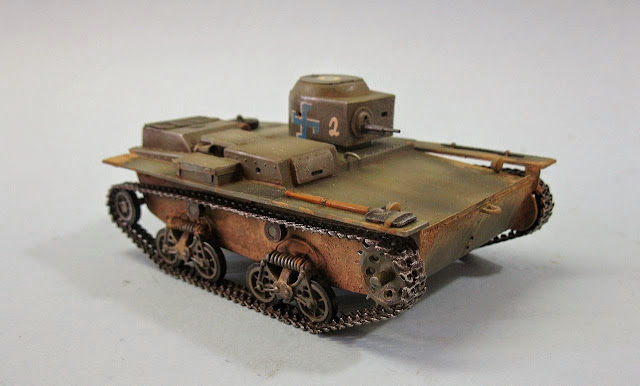 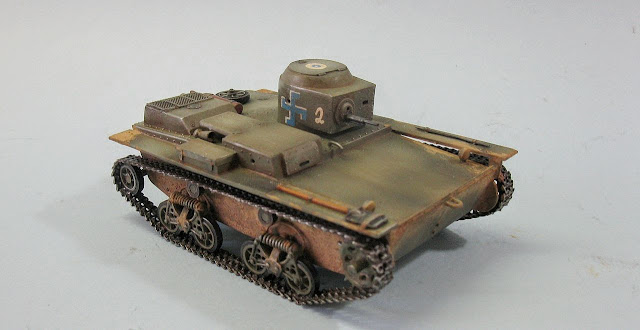