The M6 37mm Gun Motor Carriage can be considered as the first American tank destroyer of WWII. Practically a gap filler, it was the result of an adaptation of a high-speed gun of only 37mm (obsolete, even in its time ...) on the chassis of a Dodge WC-52 4x4 light truck. He was employed for the first time in Tunisia, in 1942, where his shortcomings were blatantly evident. Today we are going to meet this pioneer of the American tank destroyer formations: the M6 37mm Gun Motor Carriage. 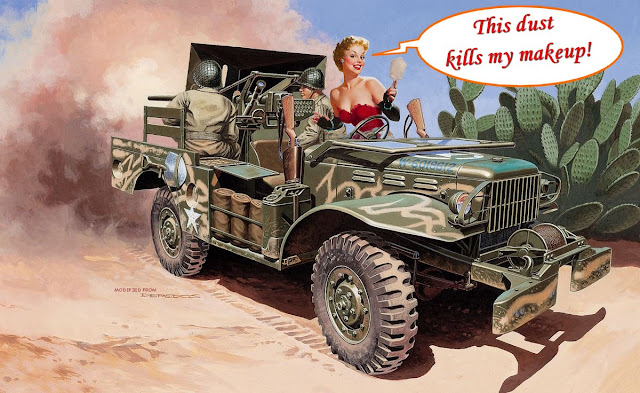 History:
In June 1941, the Fargo Motor Corporation, a subsidiary of Chrysler Corporation, proposed to US Military the design of a 37mm gun motor carriage, using the 3/4 ton, 4x4 Dodge WC-52. This vehicle had the great advantage of being in full production, simplifying the logistics and the supply of spare parts.
A wooden mock-up in full-scale of the proposed vehicle was delivered to Aberdeen Proving Ground in August 1941 for evaluation, designated as 37mm gun motor carriage T21.
The 37mm gun M3 was mounted on the mock-up facing toward the front and toward the rear to determine the best arrangement. The weapon aimed toward the front produced worst weight distribution and several disadvantages, such as: the necessity to eliminate the wind-shield and the effect of the gun blast in the driver. This arrangement also required a higher mount to provide adequate clearance over the engine hood.
With the gun aimed toward the rear, many of the flaws were eliminated, with the advantage the vehicle could move rapidly once it had fired without the necessity of turning around. A full 360 degrees of traverse also was available with a limited amount of depression to the front. The "rear installation" also permitted the use of the standard gun shield from the M4 towed carriage, but during tests in Aberdeen, the standard shield of the M4 carriage proved to be totally inadequate.
A new version of the gun shield was designed to provide more protection for gunners, but was only effective against ammunition up to .30 caliber. Although the T21 had many flaws, it was accepted for standardization due only to the rapid availability of Dodge vehicles to perform this task. This measure demonstrates the desperation to fill the gap while an armored anti-tank vehicle is not yet available.
Standardization of the T21 as the "37mm gun motor carriage M4" was approved on 26 December 1941. To avoid confusion with other M4 such as the Sherman tank, a new designation as the 37mm gun motor carriage M6 was assigned in February 1942. At Fargo, its name was Dodge WC-55. Production began in April 1942 and continued until October of the same year. A total of 5.380 vehicles were produced. 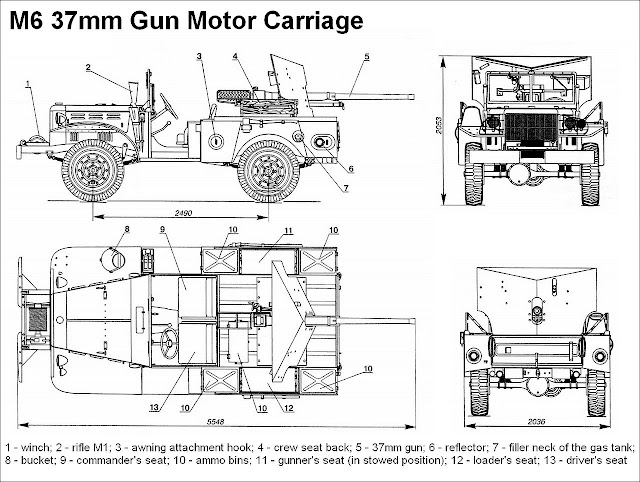 The 37mm gun fired M74 Armor Piercing (AP) Shot that could penetrate only 36mm of armor at 460 m. Other ammunition carried throughout its service life included the Armor Piercing Capped (APC) M51 Projectile (which could penetrate 61mm of armor at 400m, and the High Explosive (HE) M63 Projectile. Eighty rounds of 37mm ammunition were carried aboard. The crew-members were equipped with personal weapons for self-defense. 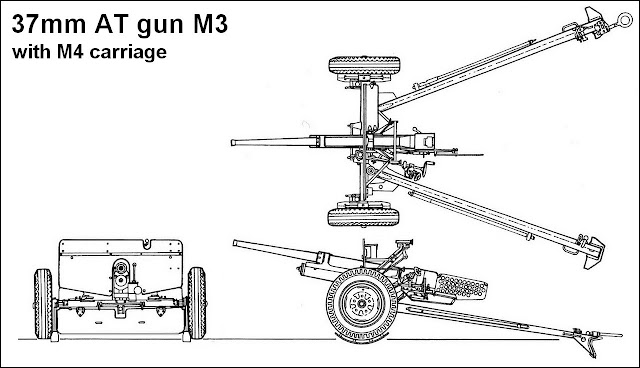 In action:
The American doctrine planned for tank destroyers to defend against enemy tank attacks while tanks were used principally to support infantry. The 37mm GMC M6 saw limited employment with U.S. forces (the 601st and 701st Tank Destroyer Battalions) during the campaign in Tunisia in late 1942 and early 1943. The vehicle was not well liked because it lacked armor and carried an anti-tank gun that was largely ineffective against German tanks of the period.
The 37 mm GMC M6 also saw limited use in the Pacific Theater in 1943 and 1944. They equipped some Marine units, but were withdrawn before seeing combat.

After the Tunisian campaign, many M6 37mm GMC had their gun removed and reverted to a cargo truck role as the standards WC-52. Some of these 37mm guns were mounted onto M2 halftracks to provide more firepower to the infantry, but not in the anti-tank function.
Other 37mm GMC M6 vehicles found their way into service with the French Army, and were later provided to French Forces of the Interior units after the liberation of France. Despite the vehicle's obvious limitations on the battlefields of Northwest Europe 1944–1945, the FFI used practically any vehicle they could obtain because of equipment shortages of all kinds.
The 37mm GMC M6 was classified as "limited standard" in September 1943, because of the availability of more powerful tank destroyers mounting 75 mm and 76 mm (3inches) guns. In January 1945, the M6 GMC was declared obsolete.
Specs: 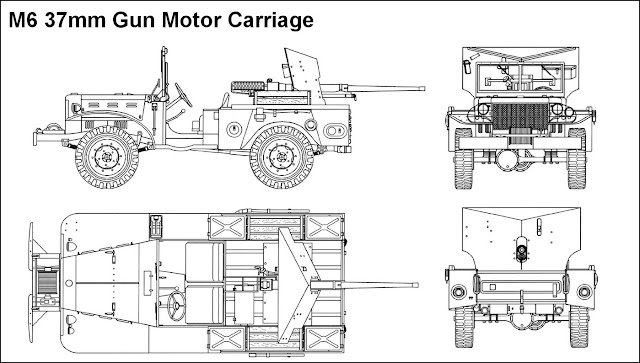 The kit:
For this project, my chosen is this classic Lady, which I have in my secret cabinets: A Peerless M6 37mm Gun Carriage (#3504), from 1974:
You must ask yourself: how does this guy dig up so many old kits like that ?? Easy answer: old, very old stocks!
And I would NEVER throw away an older gal, just because she is not as well detailed or as well injected as a new model. After all, these girls populated our youth dreams (a long time ago ...) and deserve to be treated with respect, care and affection... So, let's bring them to life in the most beautiful (and fun ...) way possible !!!

Continuing the madness ... Time to build the M6's main weapon: the 37mm anti-tank gun. This is where the age of the kit is most evident: the details are poor and the injection is very bad ... But enough to complain and let's make lemonade from our sour lemons ...

But the rifles scabbards are really horrible ... Using the (terrible) parts of the kit as jigs, I will make new pieces with very thin plasticard. The metal rod is to help bend the plastic (I will use boiling water to soften the plastic ...)

Well, after the primer, it's time for painting ... And with painting, historical markings. As always, I like to place my girls at specific times and places, as accurate as possible. And for a change, I like to put my girls in situations of real danger. In this case, we will place our M6 37mm GMC in the "Valley of Death" of El Guettar, in the final days of March, 1942, in Tunisia. Our dirty girl belongs to Company B of the 601st Tank Destroyer Battalion, vehicle number 2, which fought the 10th Panzer Division in these burning sands. 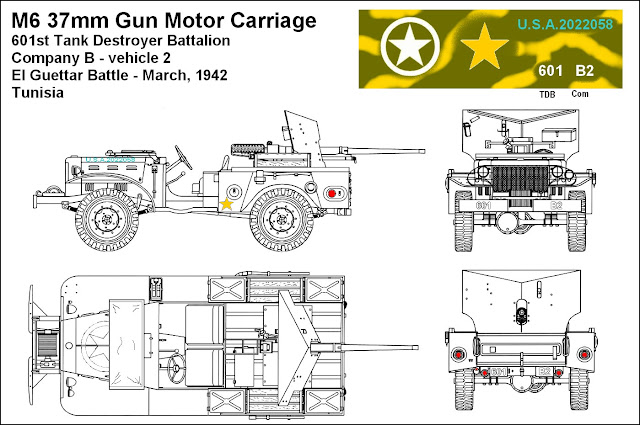 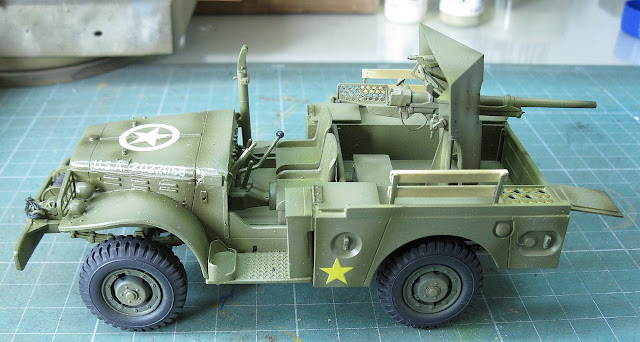 When I reach this stage of beginning finishing and installing accessories, things evolve fast. Camouflage, in the case of this vehicle, was applied in the field, after the vehicle had already been characterized with the unit markings. I will do as the soldiers did at that time: mask the important markings ... A great option to use as a mask are the modeling clay ....


And finally our old, very old lady was ready. I loved this project, which I built for pure fun. It is very gratifying to bring these Old Ladies into the sunlight. Meet the M6 37mm GMC Dodge WC-55, who fought bravely in  the "Valley of Death" of El Guettar, in the final days of March, 1942, in Tunisia. Our proud girl belonged to Company B of the 601st Tank Destroyer Battalion, with the  number 2. 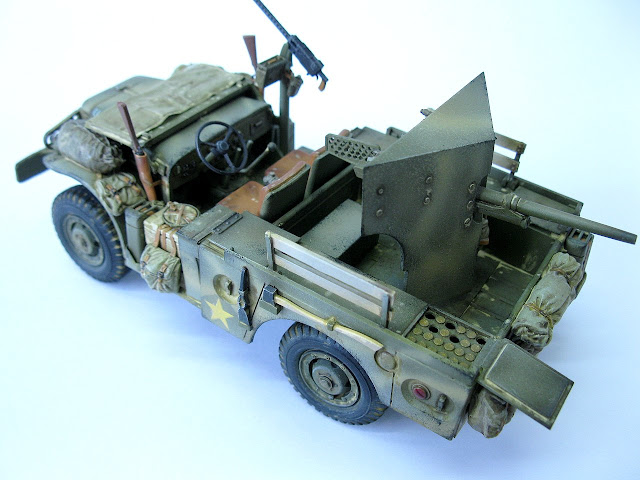 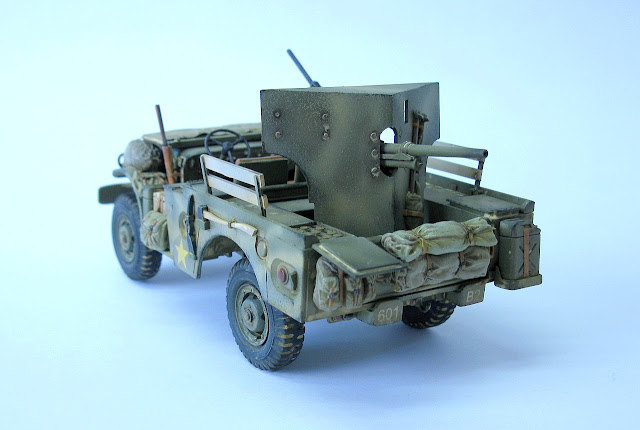 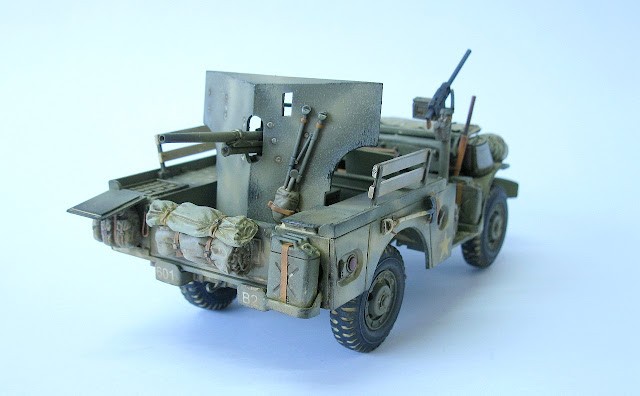 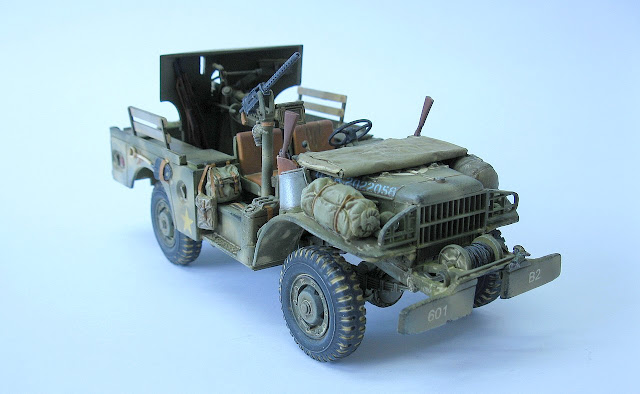 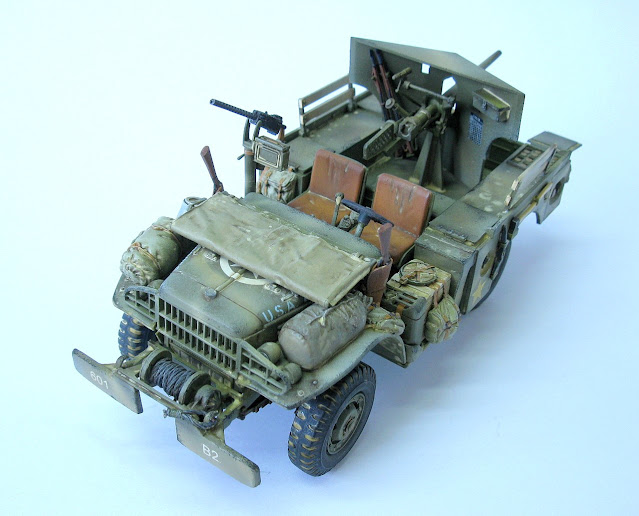