Tankers!!!
My agony continues...My apartment was not ready yet and my workshop remains offline. So, let's continue review some projects already completed. This time, it's a kit from 2006. 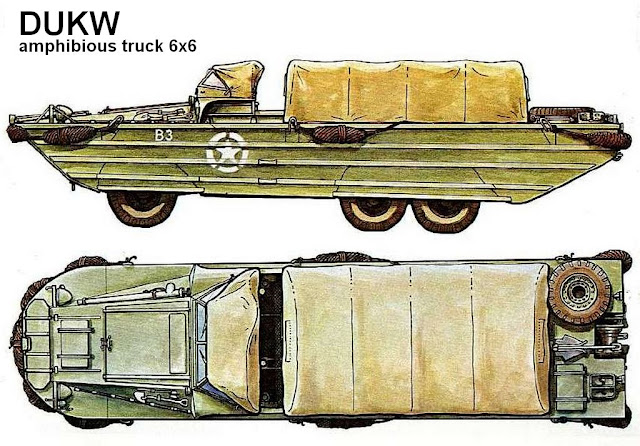 History:
The DUKW (colloquially known as Duck) is a six-wheel-drive amphibious truck that was designed by a partnership under military auspices of Sparkman & Stephens and General Motors Corporation (GMC) during World War II for transporting goods and troops over land and water and for use approaching and crossing beaches in amphibious attacks. Designed only to last long enough to meet the demands of combat, productionized Ducks, a modification of the 2-ton capacity "deuce" trucks used by the U.S. military in World War II, were later used as tourist craft in marine environments.

Designation
The designation of DUKW is not a military acronym; rather, the name comes from the model naming terminology used by GMC:
Decades later, the DUKW designation was explained erroneously by writers such as Donald Clarke who wrote in 1978 that it was an acronym for "Duplex Universal Karrier, Wheeled". However, the name is not an acronym.
The DUKW was designed by Rod Stephens, Jr. of Sparkman & Stephens, Inc. yacht designers, Dennis Puleston, a British deep water sailor resident in the U.S., and Frank W. Speir, a Reserve Officers' Training Corps Lieutenant out of Massachusetts Institute of Technology. Developed by the National Defense Research Committee and the Office of Scientific Research and Development, it was initially rejected by the armed services. When a United States Coast Guard patrol craft ran aground on a sand bar near Provincetown, Massachusetts, an experimental DUKW happened to be in the area for a demonstration. Winds up to 60 knots (110 km/h), rain, and heavy surf prevented conventional craft from rescuing the seven stranded Coast Guardsmen, but the DUKW had no trouble, and the military opposition melted. The DUKW would later prove its seaworthiness by crossing the English Channel.
The DUKW prototype was built around the GMC ACKWX, a cab-over-engine (COE) version of the GMC CCKW six-wheel-drive military truck, with the addition of a watertight hull and a propeller.
The final production design, perfected by a few engineers at Yellow Truck & Coach in Pontiac, Michigan, was based on the CCKW. The vehicle was built by the GMC division of General Motors, which was still called Yellow Truck and Coach at the beginning of the war. It was powered by a Chevrolet straight-6 engine of 4.416 cc. The DUKW weighed 6.5 tons empty and operated at 80 km/h on road and 5.5 knots (10.2 km/h) on water. It was 9.4 m long, 2.51 m wide, 2.17 m high with the folding-canvas top down and 2.6 m high with the top up. 21,137 were manufactured. It was not an armored vehicle, being plated with sheet steel between 1.6–3.2 mm thick to minimize weight. A high capacity bilge pump system kept the DUKW afloat if the thin hull was breached by holes up to 51 mm in diameter. One of every four vehicles were produced with a ring mount for machine gun, which would usually have held a .50-caliber (12.7 mm) Browning heavy machine gun.
The DUKW was the first vehicle to allow the driver to vary the tire pressure from inside the cab, an accomplishment of Speir's device. The tires could be fully inflated for hard surfaces such as roads and less inflated for softer surfaces, especially beach sand. This added to the DUKW's great versatility as an amphibious vehicle. This feature is now standard on many military vehicles.

The DUKW's windshields were provided by GM rival Libbey Glass (Ford) under the "Defense Plant Corporation" umbrella as a result of Henry Gassaway, one of the GM engineers
whose wife's family worked for Libbey, and whose test driving broke the first windshields.

Service history:
World War II
The DUKW was supplied to the U.S. Army, U.S. Marine Corps and Allied forces. 2,000 were supplied to Britain under the Lend-Lease program... 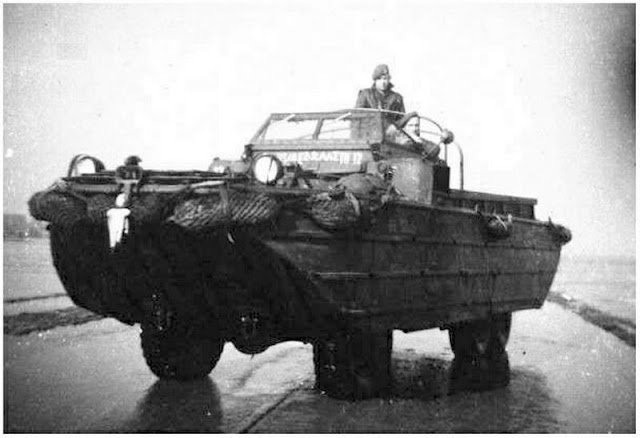 ...and 535 were acquired by Australian forces.
586 were supplied to the Soviet Union, and they would build their own version post war: the BAV 485.
The DUKW were initially sent to the Pacific theatre's Guadalcanal, and were used by an invasion force for the first time during the Sicilian Operation Husky in the Mediterranean. They would again be used on the D-Day beaches of Normandy, but also during the Battle of the Scheldt, Operation Veritable and Operation Plunder.
Its principal use was to ferry supplies from ship to shore, but it was used for other tasks, such as transporting wounded combatants to hospital ships or operations in flooded (polder) landscape. 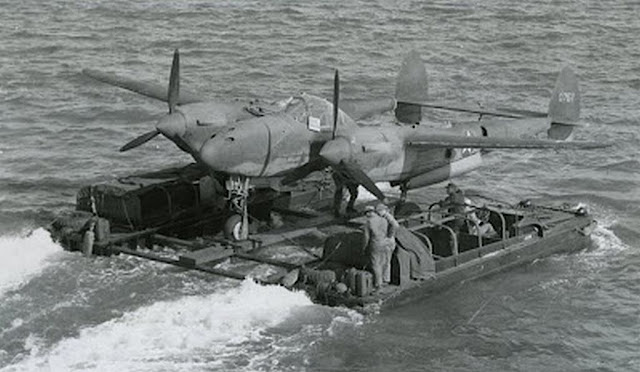 After World War II, reduced numbers of DUKWs were kept in service by the United States, Britain, France and Australia with many more stored pending disposal. Australia transferred many to Citizens Military Force units. The U.S. Army reactivated and deployed several hundred DUKWs at the outbreak of the Korean War with the 1st Transportation Replacement Training Group providing crew training. DUKWs were used extensively to bring supplies ashore during the Battle of Pusan Perimeter and in the amphibious landings at Incheon.
Ex-U.S. Army DUKWs were transferred to the French military after World War II and were used by the Troupes de marine and naval commandos. Many were used for general utility duties in overseas territories. France deployed DUKWs to French Indochina during the First Indochina War. Some French DUKWs were given new hulls in the 1970s with the last being retired in 1982. Britain deployed DUKWs to Malaya during the Malayan Emergency of 1948–60. Many were redeployed to Borneo during the Indonesia–Malaysia confrontation of 1962–66. 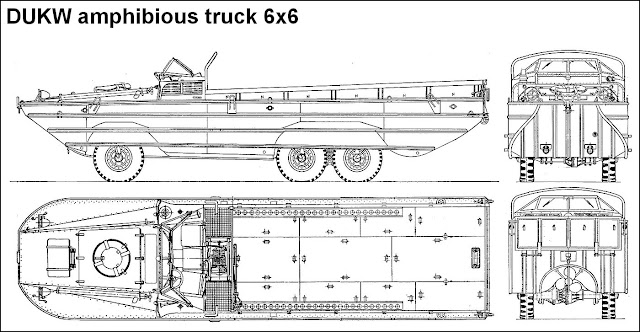 The kit:
I got this kit for my wife as birthday present. The 105mm howitzer I stored for use in other madness ....
In my researchs about this beast, I found this excelent review in PMMS. And found another interesting pics...And if it's different, I like it!!
I decided to make one of this frame crane ... I found that there is a rare and discontinued resin kit, but because it is too hard to find, I decided to make one in scratch.
But, let's built the DUKW first...The kit presents the air vents injected, with no details..
Surgery time !!! 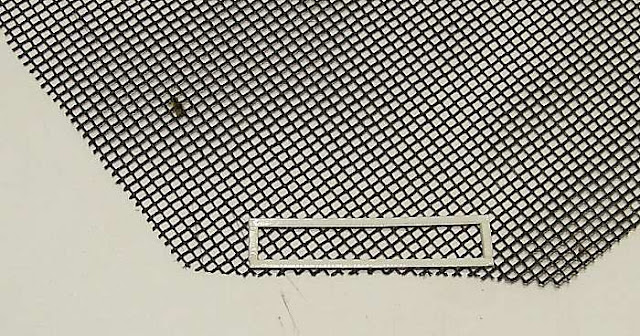 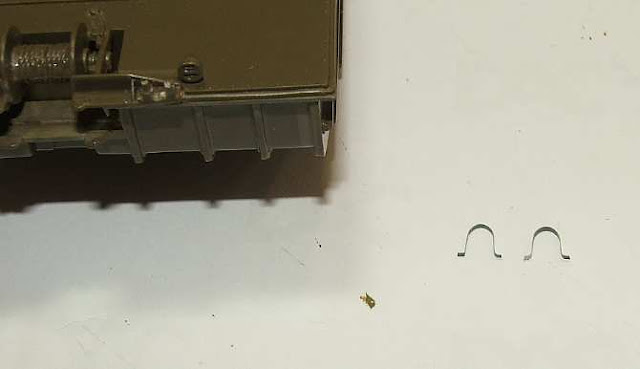 I lost some píctures... Here, you see the DUKW almost ready, with home-made metal details...


To not let the crane empty , I added some wooden planks, made ​​with popsicle sticks. My idea would be depict an amphibious vehicle, after Normandy D-Day landing, assisting the logistics tasks, in the beach: 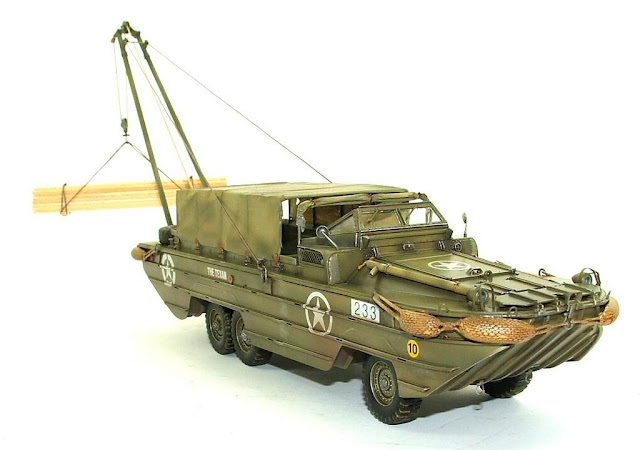 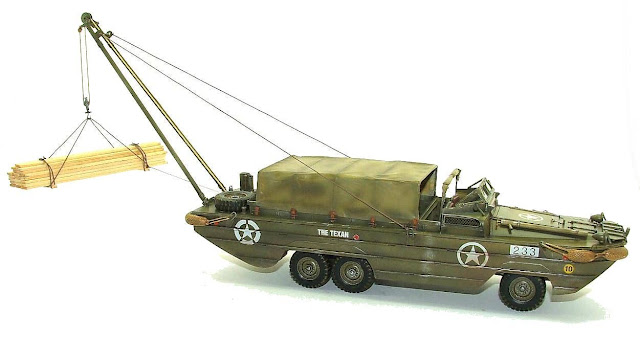 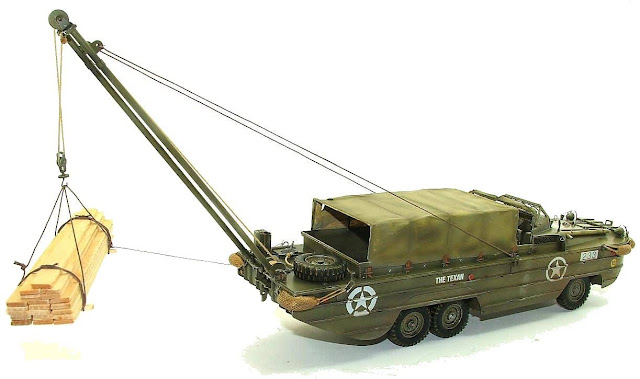 Sorry for the loss of the photos of some steps, but I think I managed to convey the idea of the project ...