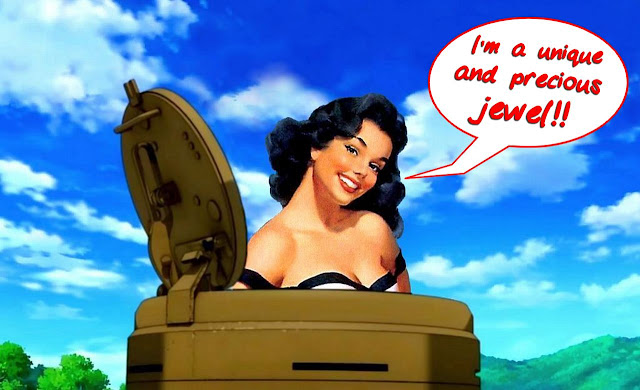 Another pretty and very, very rare German girl: Panther Ausf D dozer blade (Räumschaufel Panzer Panther).
This project was built in July 2008, but the results was very taste and different...Again, the start point were actual photos: a Panther Ausf D without main gun and with a dozer blade adapted in her snout... Räumschaufel Panzer Panther. This vehicle was transformed by MAN, Nuremberg, maybe in 1944.

It´s an old Panther Ausf D (look at the commander cupola like garbage can and the absence of the bow machine gun in front glacis ...) used as a bulldozer for cleaning the bombed german cities in 1944.
Notice the turret shows zimmerit and the hull, not. This must mean the use of scrap of Panthers in the MAN's plant (Nuremberg) to do a vehicle with this job ...
Well ... I was looking for a kit to be the "host" of this "Frankenstein" and I found this old and antique Italeri kit in the flea markets:
My original plan was to scratch the dozer blade, but which was not my surprise when NeoGrade (today, Adler Scale Models) released this conversion kit, five years ago...
At the time, I thought: Wow!!
I ordered and received the kit from LuckyModel. Here is what I found when I opened the box:
Holly Crap !!
I thought to give a bath of boiling water and try to straighten the thing, but with absolute certainty the blade warp again. The correct line is to replace the portion of the twisted dozer and scratch the part in plasticard. I decided to cut the resin dozer in the red arrows to preserve the rivets details. This is the new blade above the NeoGrade:
The Panther was built easy and fast...
NeoGrade kit specified the building of the blade only with steel rods ...

At this stage, we discuss on Armorama that dozer blade should have some kind of lifting mechanism, for more effective action.Jim Dodson warned about the fact that, in the photos, some kind of wheel appears in the inner apex region between the blades, on top. 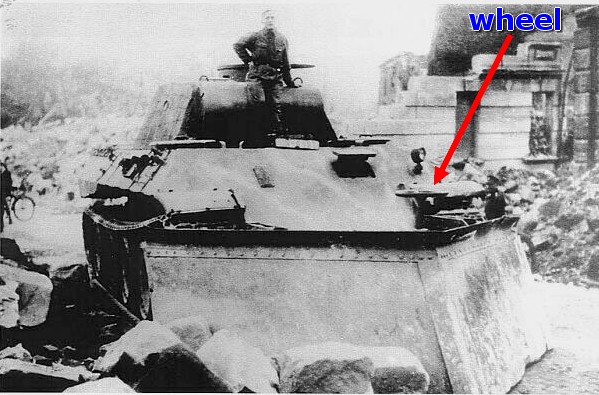 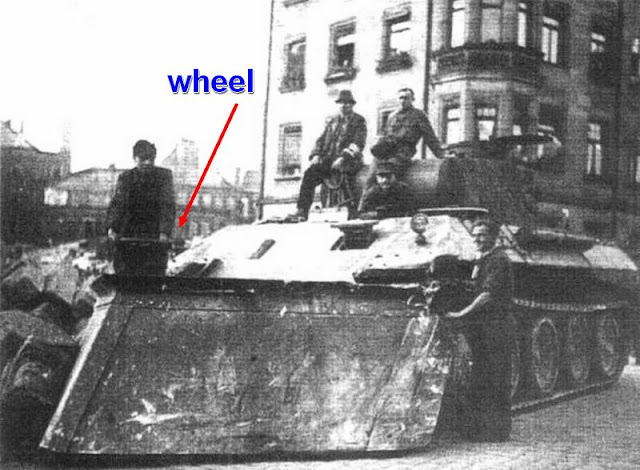 And Alan McNeilly drew a sort of sketch of what could be the mechanism ...
The elevator sistem would be similar to the lift blade system of the Studebaker snow-plow, that also I build: 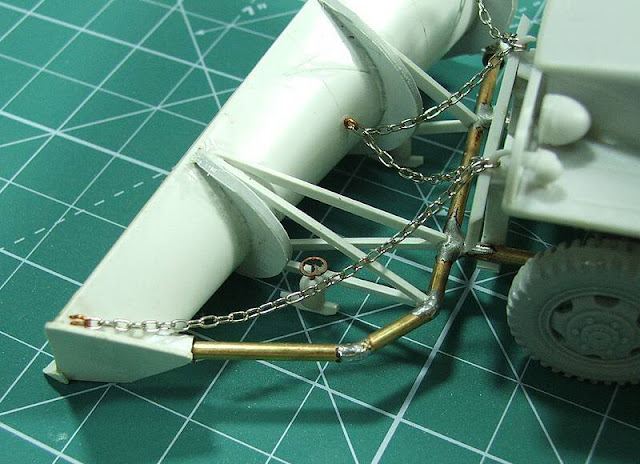 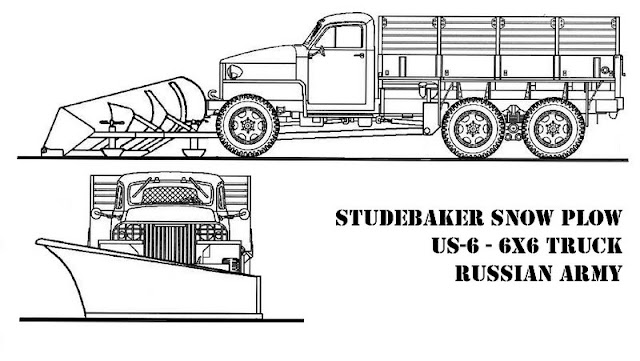 While I decide how to build the blade elevation system, I continued to assembling the Panther: Making Zimmerit wioth soldering iron:
Something like this, as I show in these 4 short films, in sequence. 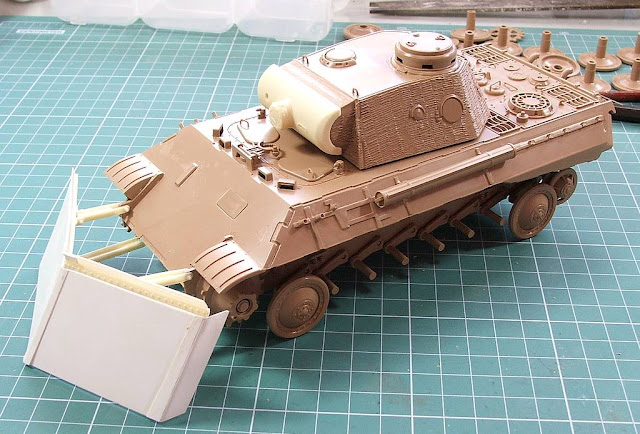 I post this building in Armorama and received many ideas and contributions of various fellows. Jim Dodson (thanks a lot, Jim...) sent the saga of this vehicle:
"The story behind this vehicle is that the MAN factory in Nurnberg converted a Panther in for rebuild/major repair to plow the rubble from the streets. It could be that there was internal damage that prevented replacing the gun or that this was a temporary fix and the plow was removed, the gun replaced/repaired and the Panther was sent back to the front.
I tend to think that it was a quick fix and was replaced. They had placed Ausf D turrets on Ausf G chassis so why waste the turret. The only thing that needed to be done was weld on a lower mounting point for the plow. This could have been left on or removed when the vehicle was returned to service.
After seeing the pictures of Nurnberg after the war they needed more than one Panther with a plow. The city was flattened, just giant piles of rubble. If it wasn't for a turret from the castle on the hill I would not have recognized the place. Gave a whole new meaning to "precision" bombing! "Yes, Sir! We dropped out bombs and hit or target! Most of them did land in the city, a few in the suburbs!"
So, the idea is that this vehicle was built with parts from other vehicles, to serve as a bulldozer while awaiting repairs in your weaponry ... 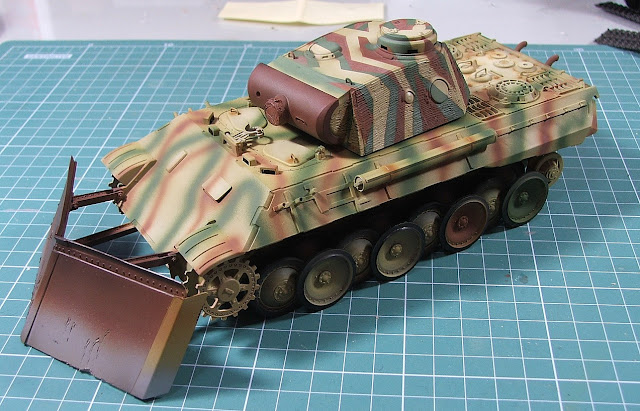 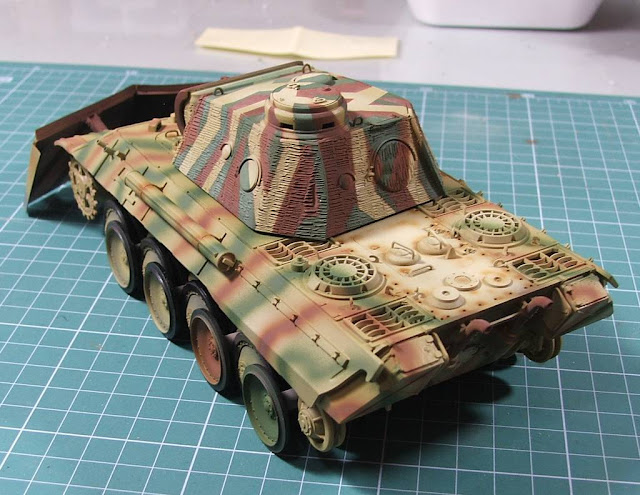 At this stage, I decided to make the blade lift system, adapting the Alan's sketch. See the pics below; I used many spare parts of my scrap box...This apparatus was an exercise of pure imagination ...based on logic, but only imaginary. 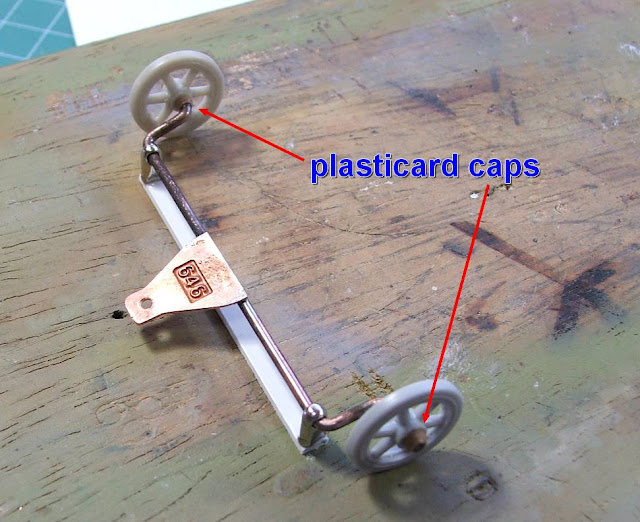 When I started to build the elevator, I imagined something like the actual photo:
And the elevator sistem done:
After painting the Panzerserra-McNeilly device:
Starting the weathering...
And, finally...For the pics, I used my generic 'stone' base, with rocks and debris.... 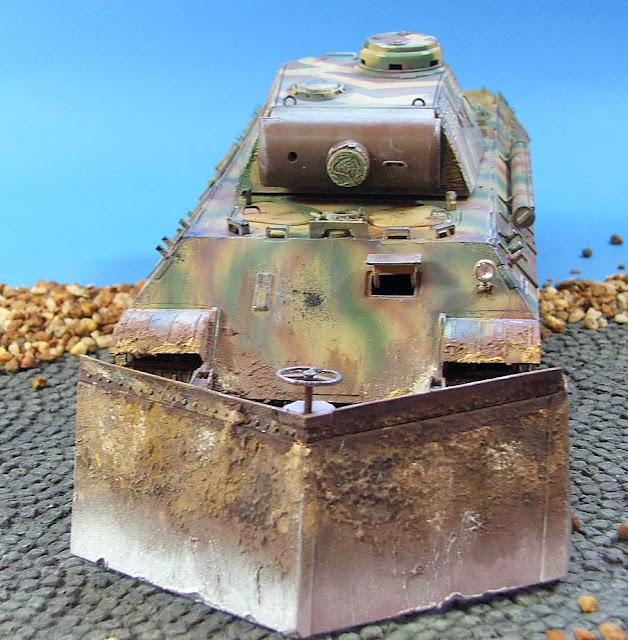 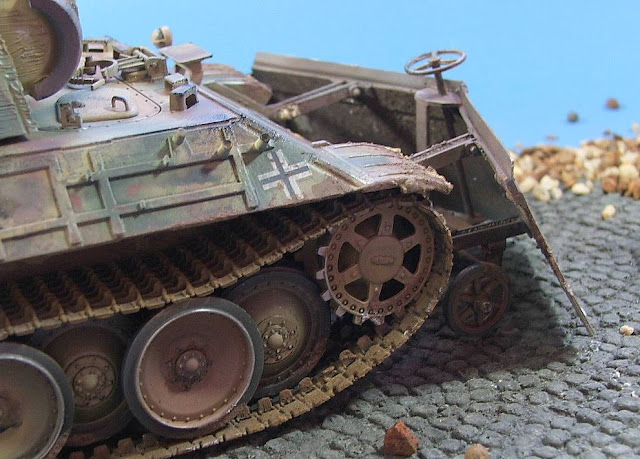 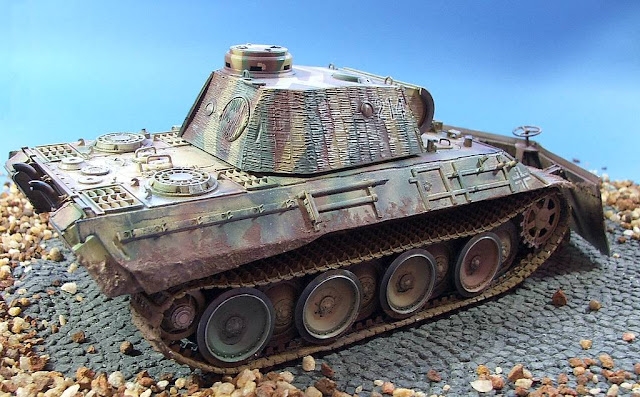 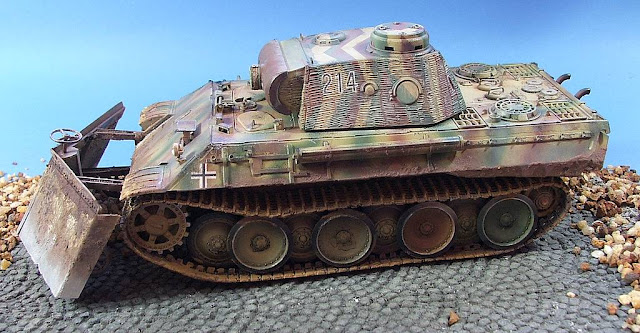 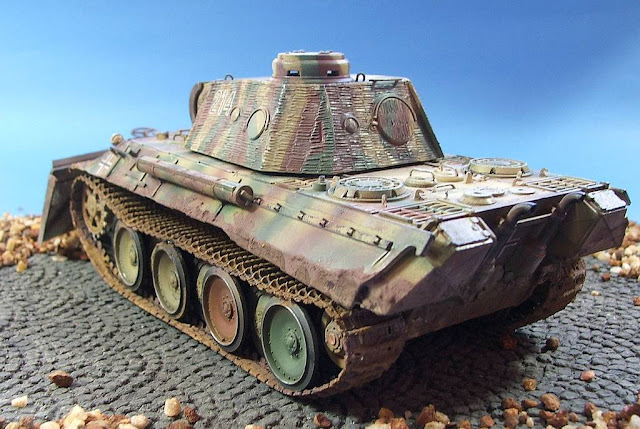 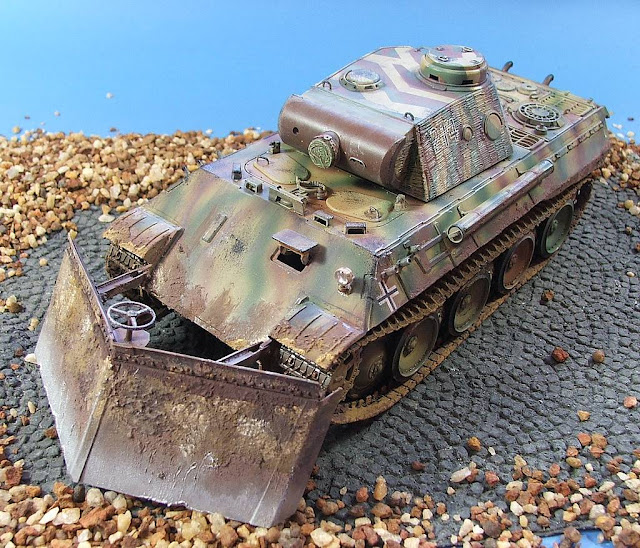 And if someone wants to build something like this beast, this is the cake recipe: 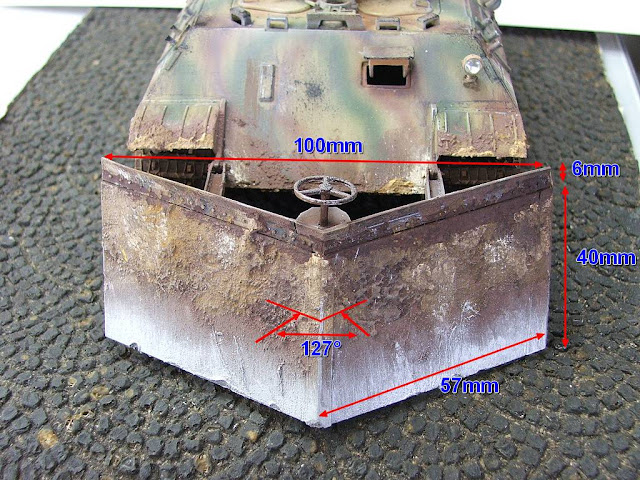 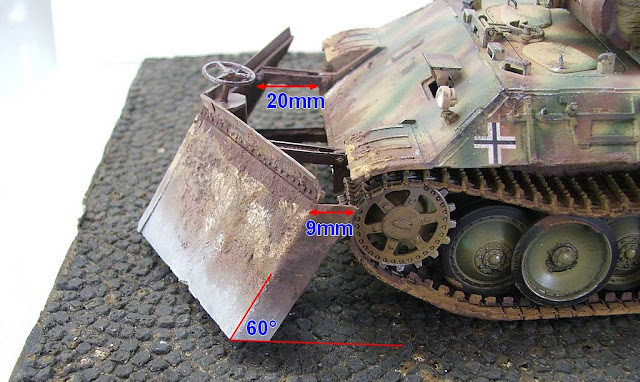 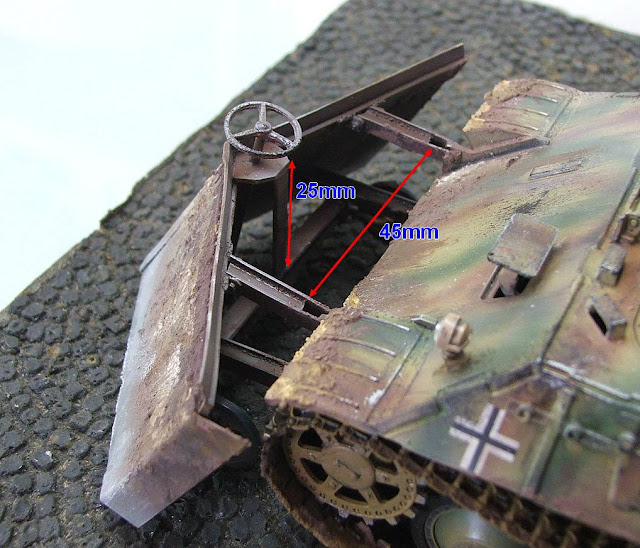 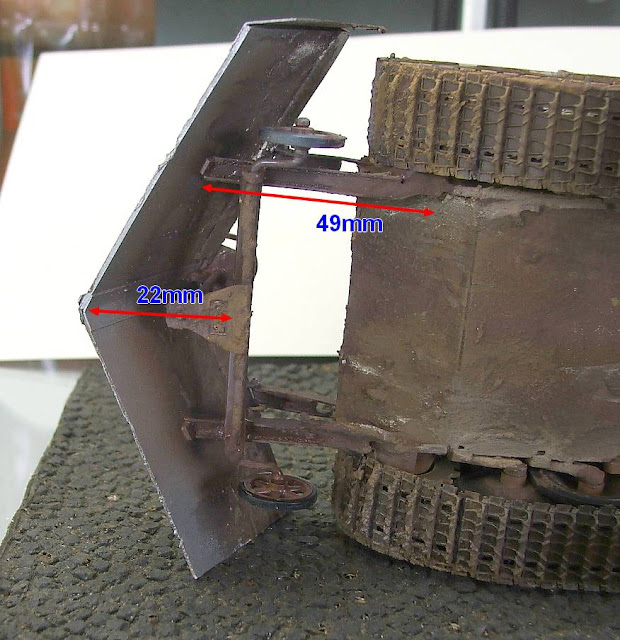 And to wind up, it appears that the elevator system Panzerserra-McNeilly was successful because Adler Models (the successor to NeoGrade) 'adopted' our design. See and compare: 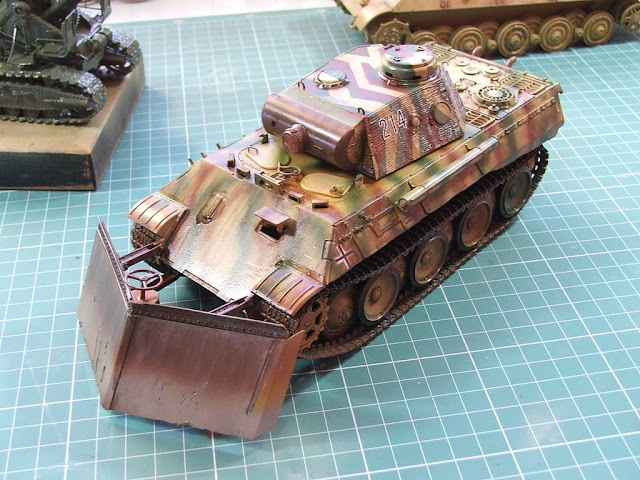