Hi, Gents...
Today we will see another rarity in the field of armored forces: an American prototype that was "built" as a possibility to be able to deal (quickly) against the German Panther and Tiger tanks. Meet this prototype of what would be an M4 with the 90mm gun (and turret...)  of the future Pershing. With you, the Prototype M4 Sherman (late) big hatch, with 90mm turret. 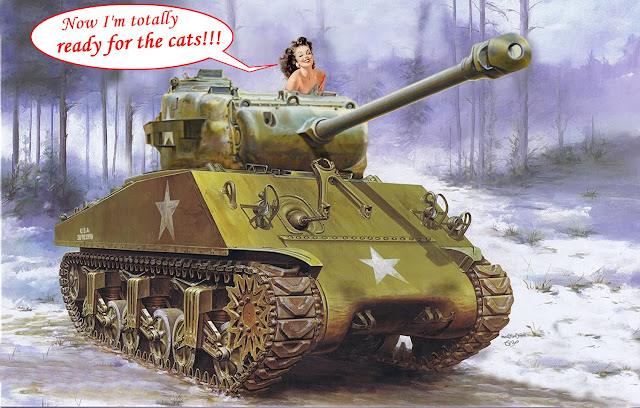 History:
The saga of this prototype was well reported by Hunnicutt in his "Bible of Sherman" - A History of the American Medium Tank:
... "As a result of the crisis in Normandy, Brig. Gen, Joseph A. Holly returned to the US in July '44. As Chief of the Armor Section for the ETO, he was directed by Gen. Eisenhower to expedite the production and shipment of more powerfully armed tanks and tank destroyers, particularly those with 90mm guns. During his visit to the Detroit Arsenal, Gen. Holly viewed a Sherman armed with the 90mm gun M3. This was an M4 fitted with a Pershing type 90mm gun turret. Since both tanks had 69 inch turret rings, such an installation required only stowage changes and modifications to obtain adequate clearance between the turret assembly and some components on the tank hull. The experimental vehicle was fitted with the early vertical volute spring suspension (VVSS) and with the 16-9/16 inch wide track."...
The single prototype tank built by Chrysler (Detroit Tank Arsenal) in the summer of 1944 that had a 90mm gun T26 turret mounted on an M4(105) chassis. The T26 Pershing and M4 Sherman tanks had the same turret ring. The project was canceled by the Ordnance Dept. after it became apparent that this tank still needed to be tested, would not likely arrive in the combat theater any sooner than the T26 tank, and would most likely interfere with the T26 production effort.
An issue to be considered was an increase in weight of the final vehicle by about 3,200 kg, as the standard turret (75 mm) of an M4 weighed around 8,800 kg, while the turret of a Pershing, with its 90 mm cannon, weighed about 8,800 kg. of 12,000 kg. But VVSS suspensions could handle (with a little pain) this overhead, at least in the prototype.
The Sherman´s hull (M4A3) eventually getting a turret with 90mm gun from M36 Jackson, coming into operation as Destroyer M36B1:
In the Sherman Hunnicutt book, there is a drawing of a alleged  "Easy Eight" version that confuses many people: 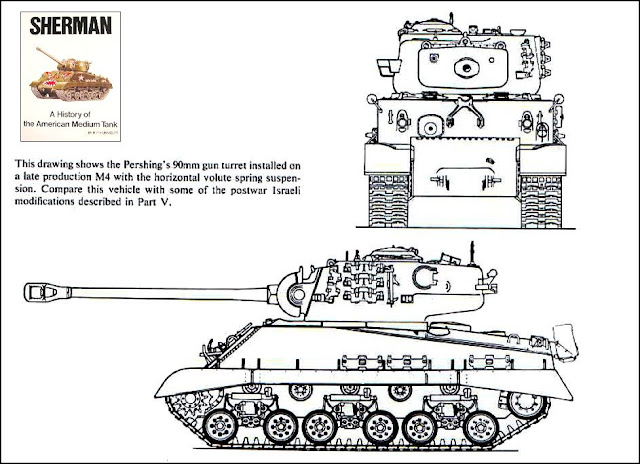 But the version of the only known photo is clearly an M4 (late) big hatch hull, with VVSS suspension. Something like this George Bradford drawing that I modified, below: 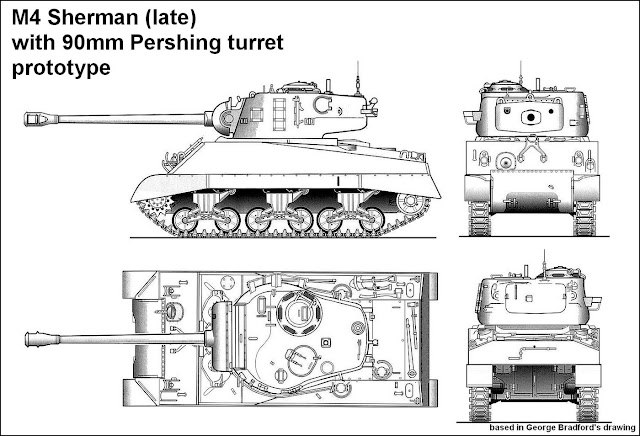 Specs:
So, after that,  modeling time !!!
The kits:
The players: An old (but honest...) Tamiya´s U.S. Medium Tank M4 Sherman Early Production kit (#35190) for the chassis and suspension... The HobbyBoss kit (#82424) M26 Pershing Heavy Tank, for the turret...And a rare and magnificent TankWorkShop upper hull for the M4 large hatch late version, with its flat rear deck (typical of radial engines), with additional fuel nozzle. At that time, the folks of Tank WorkShop sold to me only the upper hull of the M4 105mm Howitzer kit (#TWS0009). Too bad this amazing option closed, now!!!
Notice the vehicle with correct M4 late hull:


Building the kit:
The building starts by the suspension... Following Tamiya's Holy Scrolls!!
The upper hull TWS matches perfectly with the chassis Tamiya 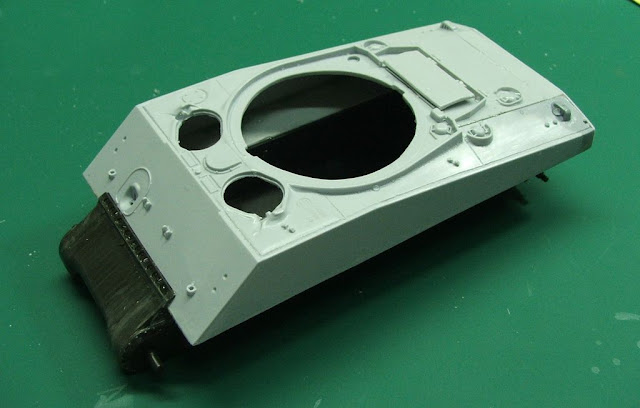 I used plasticard to close the sponsons of the Tamiya kit (an old fault, never corrected ...)
The HobbyBoss kit is superb. I started the build of the M26 turret...


After removing the burrs of the tower´s  ring of the TWS hull, I adapted the turret on the hull: the Persherman is growing ....

And the "Frankensherman"  was also ready... See the pics: 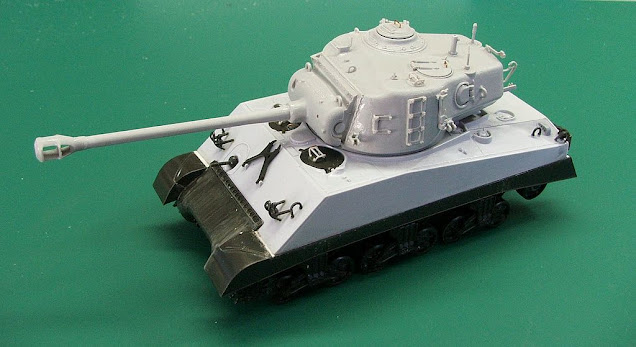 When the build over, it's time to start the painting...Primmer first !!

After the primer dried, the olive drab in different shades 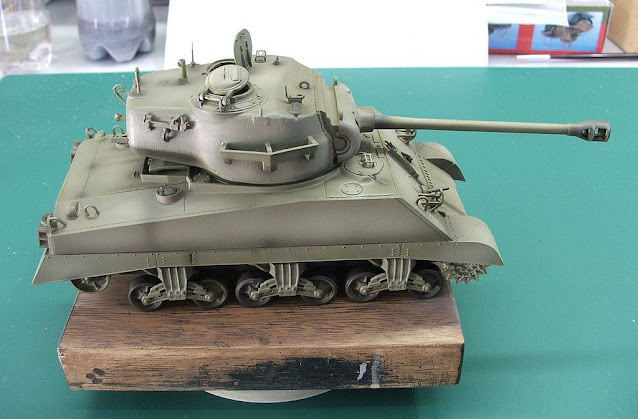 And the Persherman is ready. Thanks to Kurt Laughlin, to confirm the correct numbering of this vehicle: 30103950.
I made the numbers with Archer Dry Transfer. Excellent stuff... 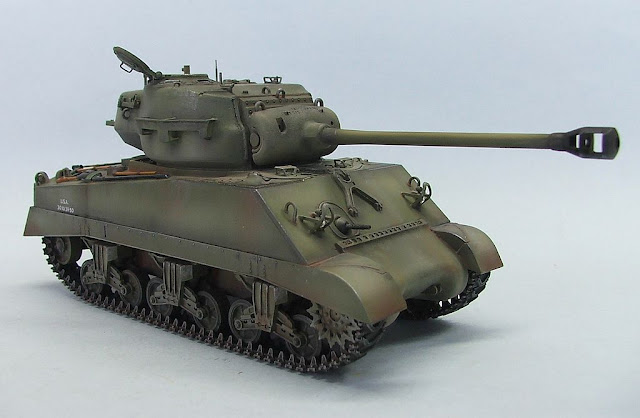 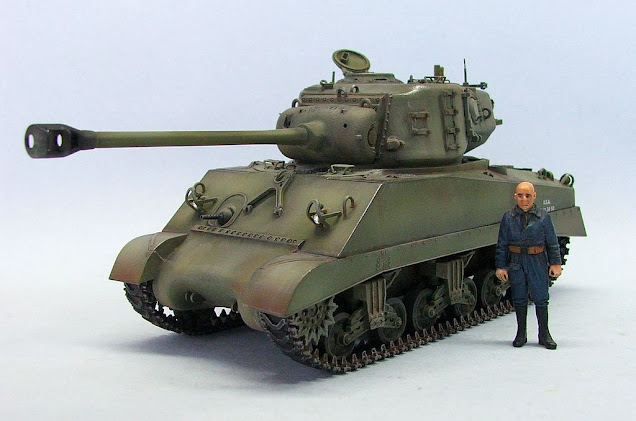 I loved doing this project, mainly for historical references involved. Reproduce a real vehicle in a real picture is always very rewarding ...