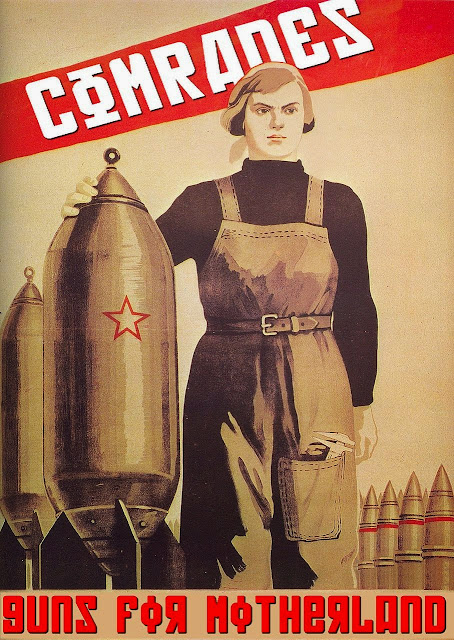 While I was looking in my closet for a particular kit to build (I confess... I was looking for a Russian KV-1, from Trumpeter), this kit from Maquette fell at my feet ... literally.
I had this kit I did an exchange with a colleague (very very cheap ...), but remember that it was very, very bad. After building the MENG and Tamiya models, I thought: a bit of suffering would not hurt (certain mistake!!). And remember too that had a 57mm AT gun from MiniArt and a metal gun from RBModels. Why not face the challenge?? So, let´s go !!!!  By Motherland!!!!
First of all, the real weapon and his importance in the history...
History:
At the beginning of the Great Patriotic War Red Army had neither tank destroyer nor SPAG in mass production. Before the war, several projects were developed; some of them were built. However all of that projects were abandoned later for various reasons. That's why, in July 1 of 1941, the Minister of Weapons signed an order to develop and produce a 37mm SPAG, an 85 mm SPAG and a 57mm TD (tank-destroyer). All projects were to be finished not later July 15, 1941. The development of a 57 mm TD was assigned to the Factory #92 in Gorky (today - Nizhnij Novgorod).
To accomplish this task a special group of engineers was summoned to the factory's design bureau. The head designer was P.F.Muravev. In a very short time the new SPAG was designed and realized as a prototype.
It should be noted that two different prototypes were built: the ZIS-30 and ZIS-31. The ZIS-30 was a light tank destroyer based on the "Komsomolets" tractor.

It was armed with an open high power 57 mm ZIS-2 AT-Gun, protected only by the gun's shield. For better stability the TD was equipped with two extendable skids. The ZIS-31 had the same armament but was based on an armored truck GAZ-AAA. Comparison tests were done of the two machines in July and August. They showed that the Zis 31, when firing, was more steady and had a greater grouping of shots in comparison to the Zis 30. However, the cross-country ability of the Zis 31 was poorer than the Zis 30, so preference switched back to the Zis 30.
The Factory #92 was ordered to begin ZIS-30 production by September 1, 1941. However, a new problem appeared: at that time the only one factory produced the "Komsomolets" tractors - it was Moscow factory #37. However, in August 1941 this factory switched its production from tractors to tanks, so no factory in the USSR produced this type of tractor any more. Then the decision was made to collect tractors from Red Army's units. We can imagine the condition in which those tractors were received after their use in the Army!
As a result the production of the ZIS-30 tank destroyer began on September 21 and continued up to October 15, 1941. During this period the factory #92 produced 101 TDs (including one experimental TD) with the 57 mm gun and one TD with a 45 mm AT-gun. Further production was cancelled because of a lack of tractors.
The ZIS-30 tank destroyer served from the end of September 1941. Some of anti-tank batteries and 20 tank brigades of the Southwestern and Western Fronts were equipped with these TDs. Notice at that time this TD was called the "ZIS-2 57 mm AT-Gun".
The new tank destroyer was very successfull because of its excellent gun (in 1941-1942 this little TD could penetrate any type of German tank from long distance).
However, this TD still had several disadvantages, such as:
- poor stability during firing (vehicle is jumping);
- overloaded chassis;
- low fuel capacity;
- low ammunition capacity;
- unprotected crew;
- lack of radio.
By the summer of 1942 most of these TD's were lost. Some were destroyed during battles, other were lost because of technical failures, although a few survived until the end of the war. They were extremely helpful and efficient weapons. 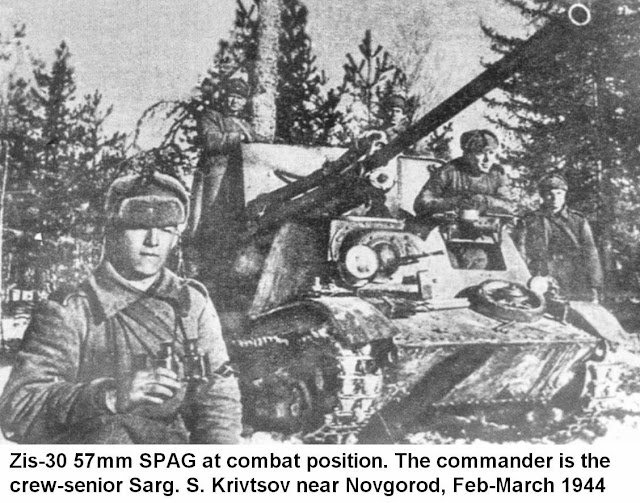 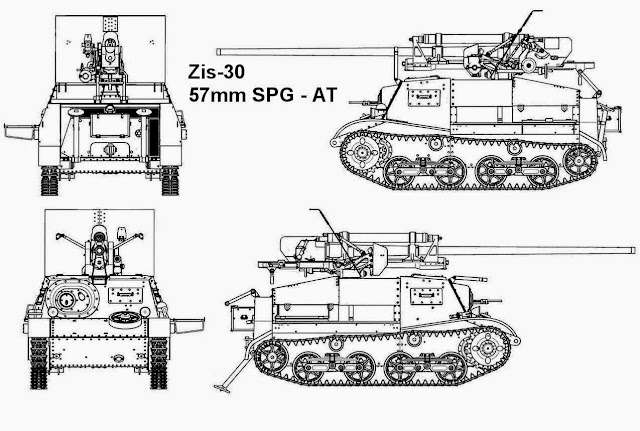 The kit
As I said before, I had this kit in my stash, but did not encourage me to build it because of the terrible characteristics of Maquette kits (they are usually simply awful). I also had a Zis-2 57mm AT Gun of MiniArt (much better) and a metal gun of RBModels. I thought build this anti-tank gun isolated, but I decided to mix the kits to improve the little monster ..
Caution: Explicit and shocking  images !!
Remove children and people of the front of the monitor !!

The Maquette kit is simply horrible. The precariousness of injection and fitting failures are indescribable ...I was really tempted to throw away the whole thing, but challenge is challenge. I will not correct the flaws of the kit (like a rivet counter), but I will make the building of this vehicle to represent this model destroyer in my collection. Life is short and this is a hobby and not a religion!
And you ask: why not use the Komsomolets tractor kit from Mirror Models?? Honestly, the reports about this new model are not the best and I already had the Maquette kit in my "ark of lost souls"... So, it's always interesting we test our nerves in an uncompromising construction ...Let's start the penance:
The beast is growing...

When I started building the suspension, I almost had a heart attack...
The parts are too small and badly injected. The tracks are unviable and indescrible.... When I saw the garbage they were the track links, I decided to throw out everything: I would not miss two days of my life at that filth ...I did not photograph the track because considered the image obscene.
But when I was almost crushing the garbage, I found two tracks of vinyl in my box of leftovers that were similar to the tractor (I really do not know where they are ...). Here is the result of my suffering:
To complete the horror, the Maquette kit comes with the sprue-trees of the 76mm gun from Zvezda. The guns Zis 2 and Zis 3 were similar.
As the barrels of Zis-2 and 3 are different, the Maquette graciously provides a long-barreled caliber barrel to replace the original. It's the worst thing that made ​​these eyes have ever seen!!
The RB Models barrel is very thick in the posterior portion. My solution: As I have a mini lathe, I wore the posterior portion of the  RBModels barrel. The wear was enough to fit in the plastic part.
If you do not have a mini lathe, you may have performed this service in a workshop. After surgery:
Gun built, the horrors of Maquette still: look at the support of the gun tube
And the Zis-30 almost done: 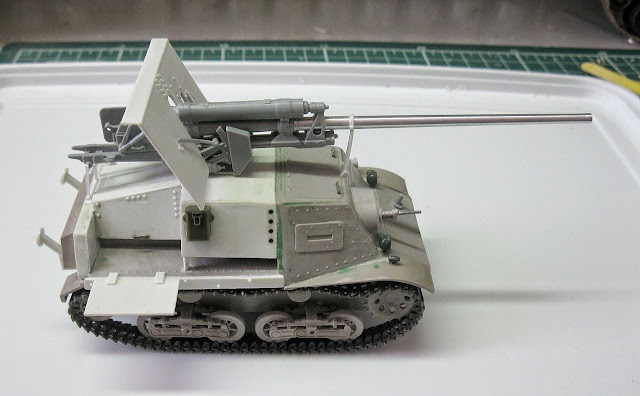 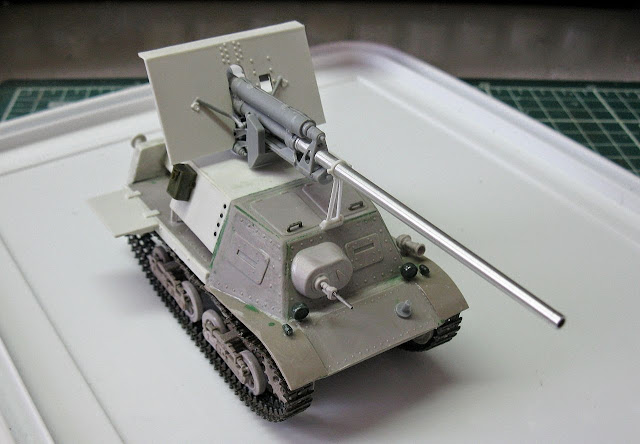 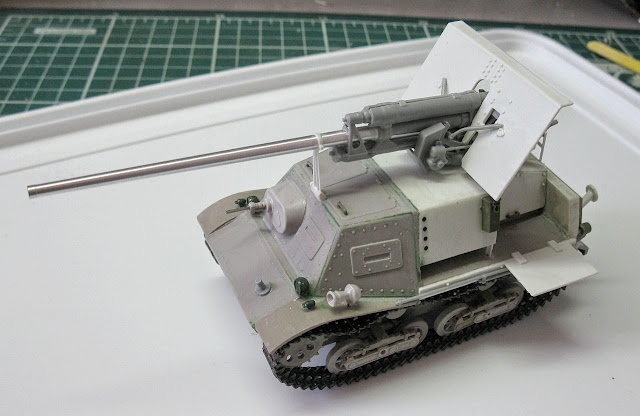 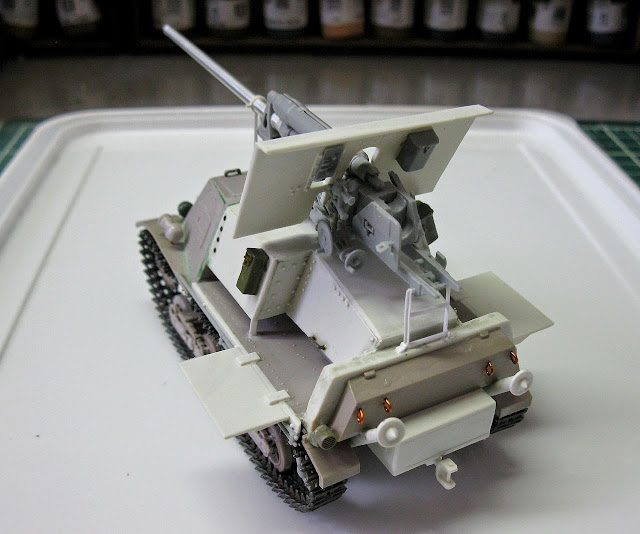 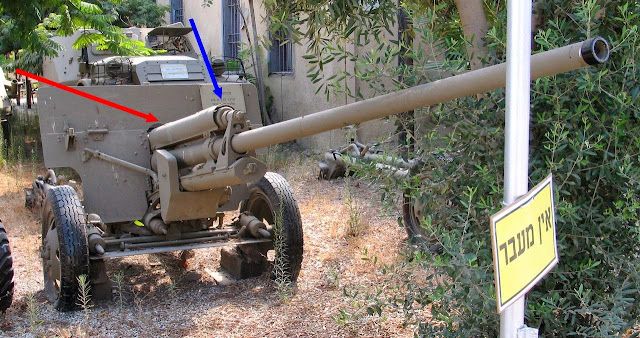 Other examples:
I also found some examples of guns without the protective cover ( with the recoil cylinder exposed) , like this in the Primeportal's walkaround. Notice the screw holes for the covers in the red arrows.
The MiniArt kit shows the gun with de metal caps. I almost rectified the gap, but the Holy Google saved me!
The inspiration: 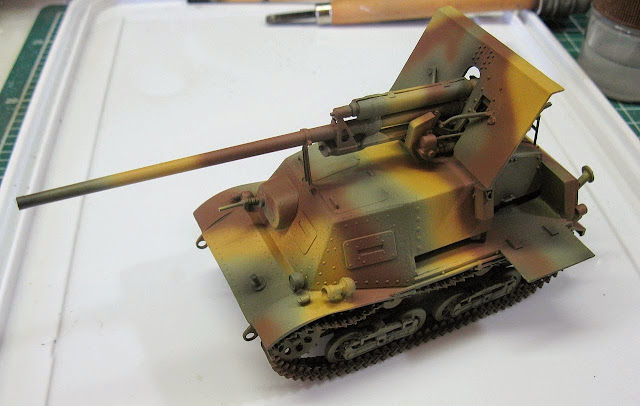 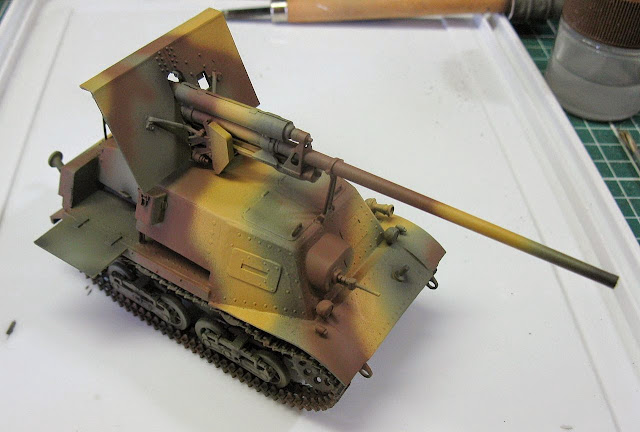 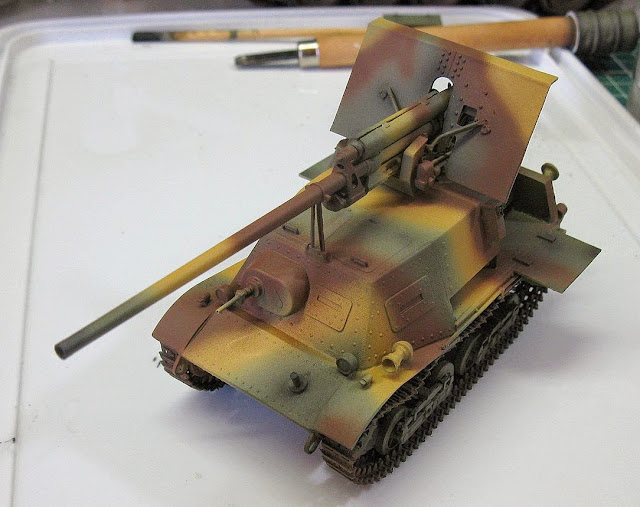 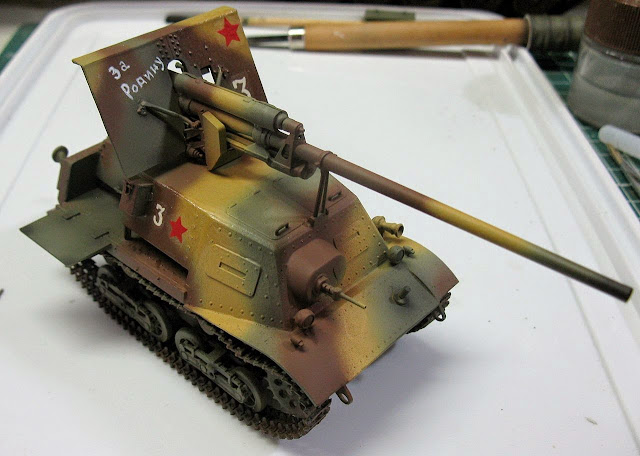 товарищ !
(tovarishch)
Finally, I finished this little project...As I said before, My goal was not to correct the model (because the Maquette kit is incorrigible and the life is short ...), but trying to build a replica of the Zis-30 to my collection. It was fun and I think I could "carry the message".
Let's know the Zis-30 57mm - SPAG, vehicle number 3 from 18th Separate Tank Brigade - fighting in the Russian Front, Summer, 1941. 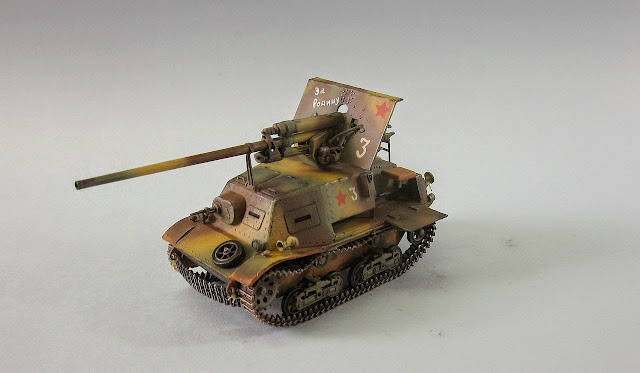 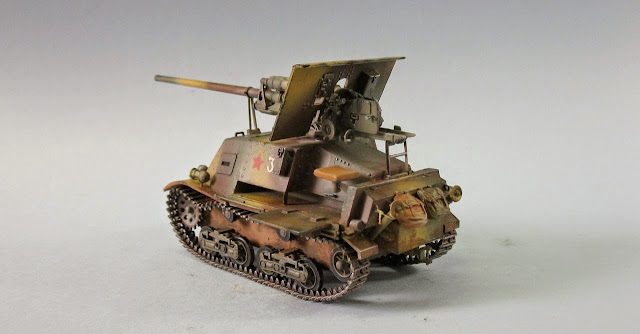 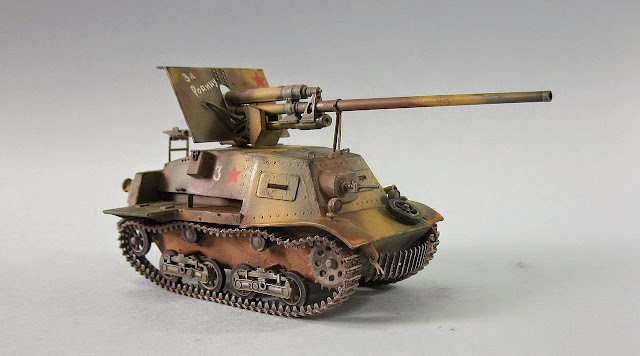 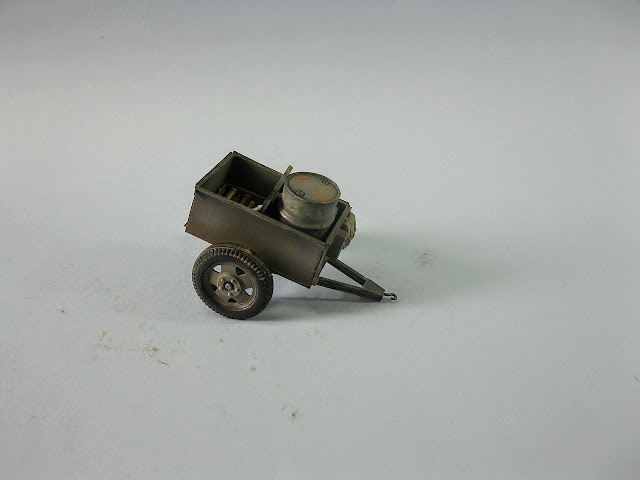 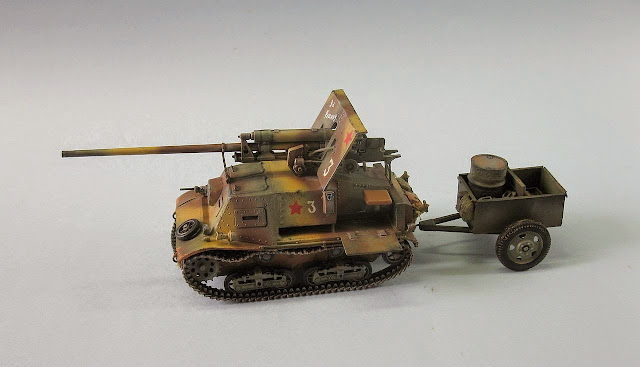 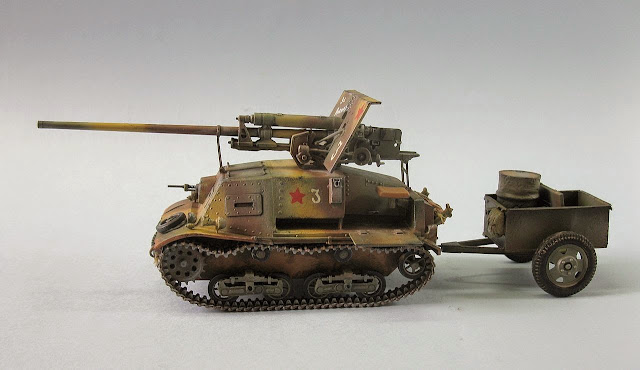 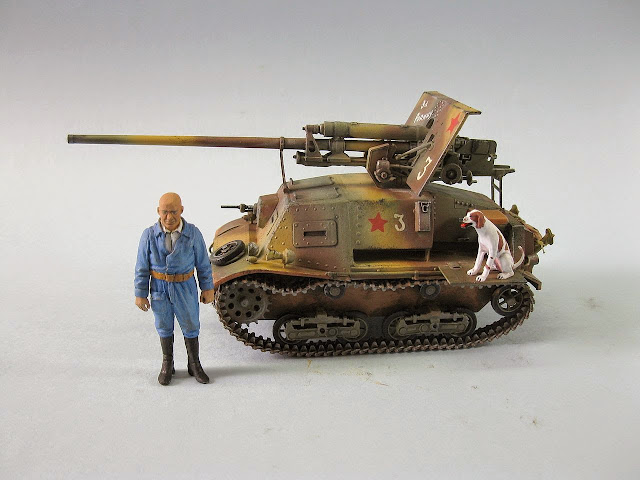