This project was based in a partially and poorly built kit that I bought with pennies on eBay. The beautiful junk arrived at my house in a plastic bag. These plastic parts were forgotten in my closet until last week when I was looking for a kit to build. I decided to reincarnate this classic. I will not do anything too far-fetched, but I'll try to improve something in the little monster ...the M29C Weasel amphibious carrier, built by Studebaker. Let's see more...
History:
The M29 Weasel was a World War II tracked vehicle, built by Studebaker, designed for operation in snow and water.

The idea for the Weasel came from the work of British inventor Geoffrey Pyke in support of his proposals to attack Axis forces and industrial installations in Norway.
In 1943 plans were made to invade German-held Norway, and it was appreciated that some form of snowcrossing cargo carrier would be required.
Pyke's plan to hamper the German atomic weapons development became Project Plough for which he proposed a fast light mechanised device that would transport small groups of commando troops of the 1st Special Service Force across snow. In active service in Europe, Weasels were used to supply frontline troops over difficult ground when wheeled vehicles were immobilised.
After a series of trials a tracked vehicle known as the T15 Weasel was selected for service and this was later developed into the T24, still named Weasel and developed for use not only over snow but over mud, rough terrain and swamps.
In time the T24 was standardized as the M29 Cargo Carrier and from this evolved the M29C amphibious light cargo carrier. The name Weasel was once more carried over, even though the official name Ark was promulgated.

The first 2,103 vehicles had 380 mm tracks, a later version had 510 mm tracks. The M29 was amphibious, but with a very low freeboard; the M29C Water Weasel was the amphibious version, with buoyancy cells in the bow and stern as well as twin rudders.
The M29C amphibious carrier was a simple conversion of the cargo carrier M29.
Changes were made to the flexible rubber tracks to enable them to provide propulsion in water, flotation chambers were provided at front and rear, and twin rudders were added for steering in water,

The land M29 had already demonstrated its abilities to cross just about any type of terrain, including snow, sand, muddy and rough stony ground, and the M29C retained all these qualities.
In water it was somewhat slow and it could not operate in other than inland waterway conditions, so its use in surf or rough water was very limited. But when used correctly the M29C soon proved to be a valuable vehicle. Its uses were legion, especially during the many island-hopping campaigns in the Pacific theatre.

Rice fields were no obstacle and the M29C was equally at home crossing sand dunes. The M29C and the land-based M29 Weasels were used as ambulances on many occasions.
Another use was for crossing minefields as the Weasel's ground pressure was very low, often too low to set off anti-tank mines, A technique was even evolved whereby the Weasels could be controlled remotely using hand-operated cords, but this technique had its limitations. The Weasels were also very reliable: they rarely broke down and their track life was later found to be far in excess of anticipations.
Once ashore they were used to cross terrain that no other vehicle could attempt, and they carried men, supplies and even towed artillery using their rear-mounted towing pintle. 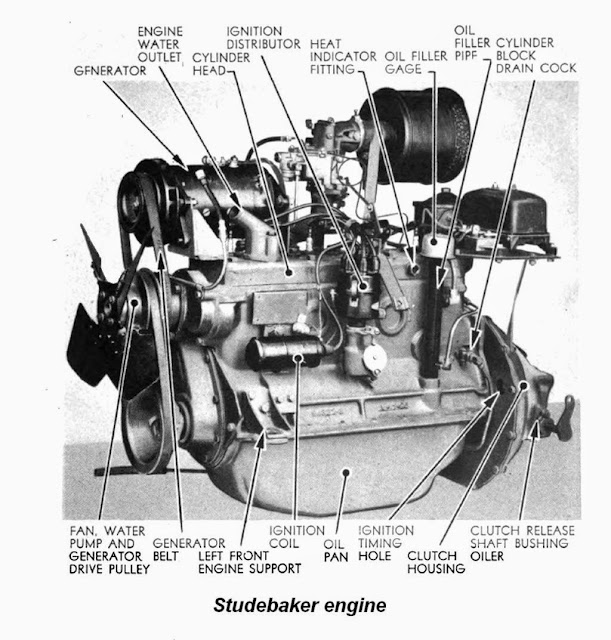 The M29C was also used by signal units, for its ability to cross water and land impassable to other vehicles made it a very valuable wirelaying vehicle. But it was as a supply or personnel carrier that it was most useful.

Although unarmoured, M29Cs were often used to carry armed troops across water obstacles and land them in front of an enemy position, other M29Cs then following up with ammunition and supplies, By the time the war ended about 8,000 M29C Weasels had been produced, and orders for a further 10,000 were then cancelled. But the M29C concept had been well established by then and since 1945 many follow-on designs have been produced. M29Cs were used by several of the Allied armies. The British army made use of a number during 1944 and 1945 and for a few years after that.
Some European armies used them for years after the war, and numbers can still be found in civilian hands, hard at work over swampy terrain. 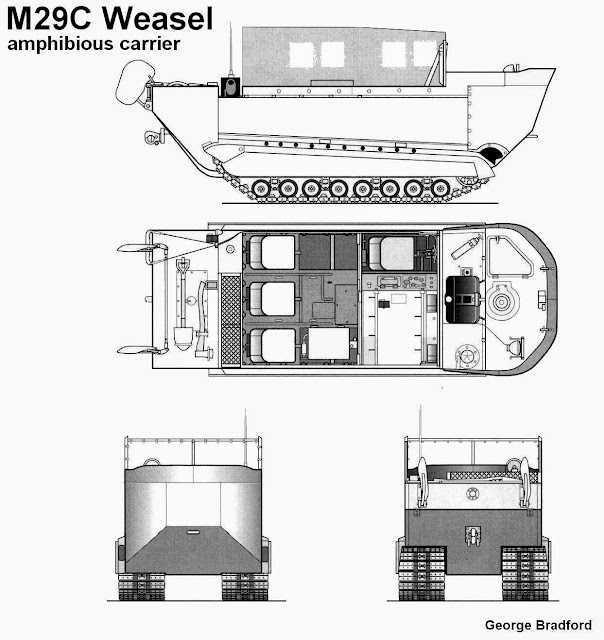 Now, in 2014, talking about this kit is interesting. This kit is one of the dinosaurs of military modeling, having been manufactured by Monogram in 1957. This beast is two years older than me, which is amazing. This is the art box:
My kit arrived like this;

The tracks were resected and contracted, but in good shape. After gluing the seam, the tracks just do not fit in the Weasel's suspension.
In desperation, I had an idea: put the tracks in boiling water and pull the tracks, expanding its length. As soon as I could stretch the plastic, plunged the tracks into ice water, keeping the stretch ...

As the tracks was already glued, its diameter increased. Adapted the tracks on the bogies and wheels and the track was relatively loose.
I heated the water again and put this warm water in a deep dish. Then, dipped the lower portion of the kit in the boiling water. The plastic softened and tried to return to the old length, stretching the track bogies without much tension: Voiláá´
Well, Gents... The new steps in the recycling of this old kit: As the kit was very old and very bad details, I decided to take a new "spice" in this representative of the early days of modeling. The interior is very poor and my idea is build the canvas to disguise the interior deficiencies. First of all, build the canvas frame with metal wire...
After that, Olive drab and decals... 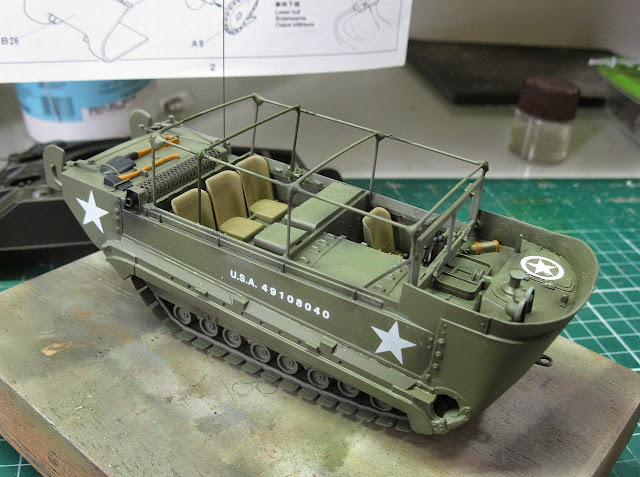 The inspiration for the canvas building... 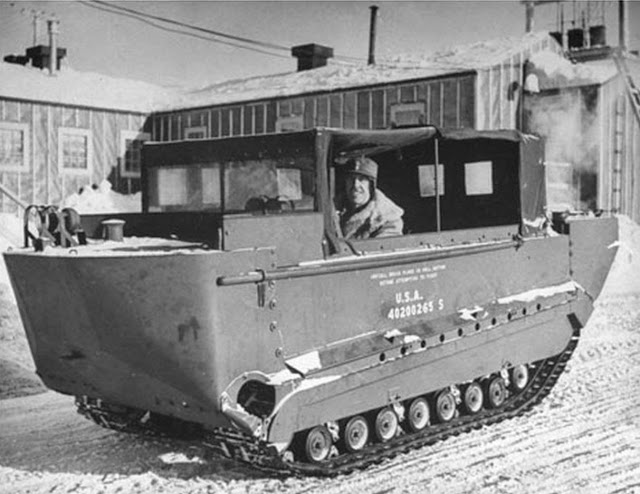 First of all, paint the "inside" of the paper with khaky in airbrush, because after glued in position, it will be impossible to paint the interior.
Firs step: applying the canvas (with the painted portion inward ...) in the rear portions of the rear hull and windshield with white glue... 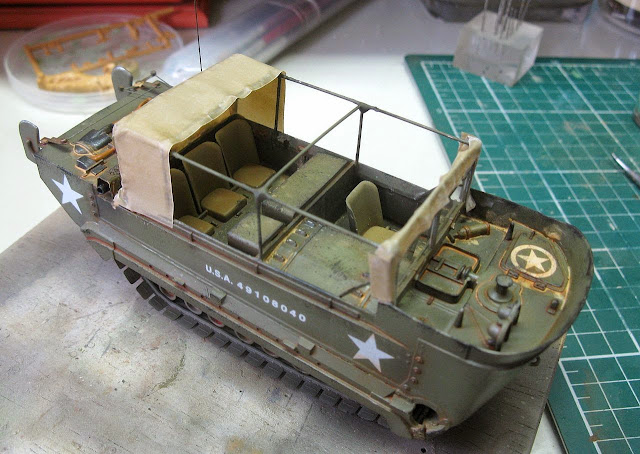 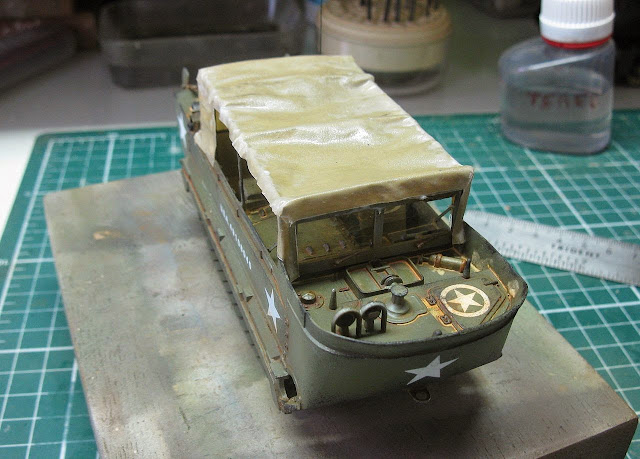 And the Girl finished. Indeed, the kit was old, primitive and rough, but provided tons of fun and it's almost a fossil compared to today's kits. but enjoyed the experience as it is a new model in my collection. And modeling for me is, above all, fun !!!! 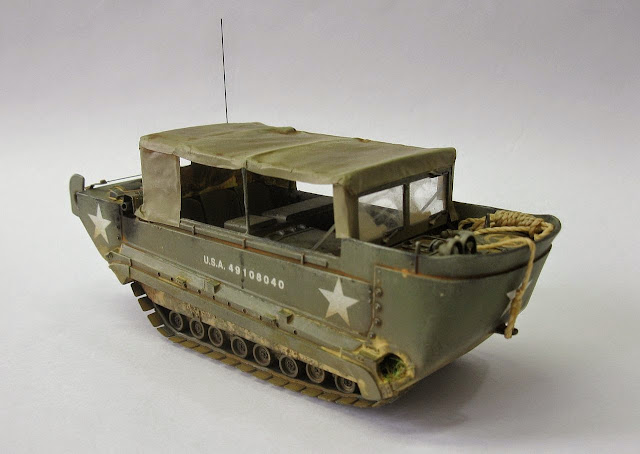 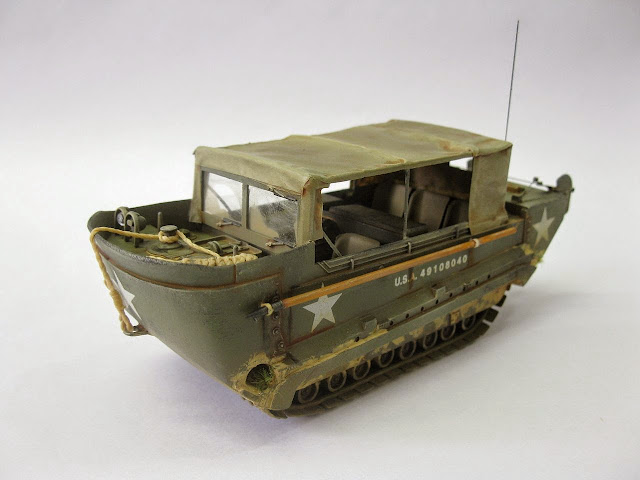 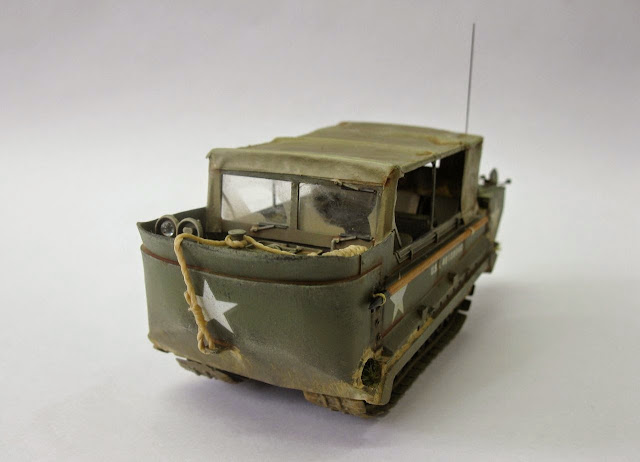 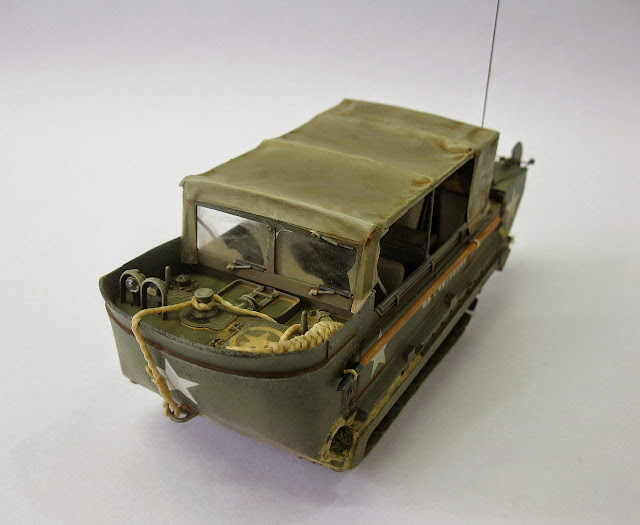 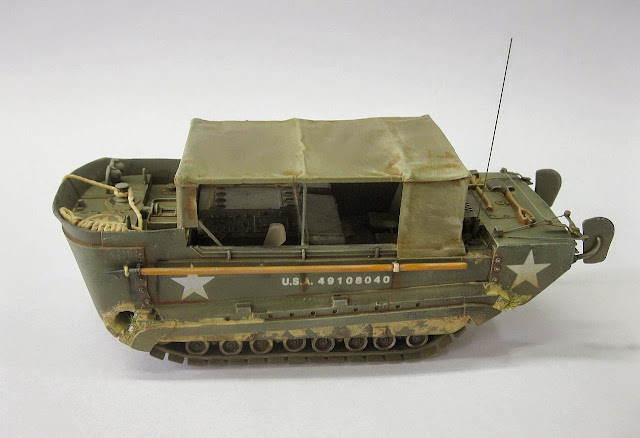 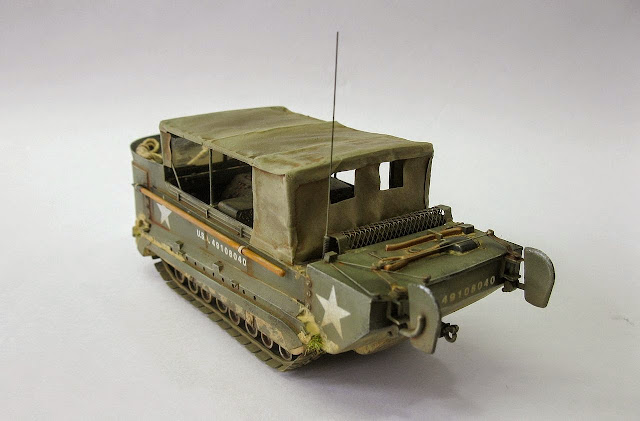 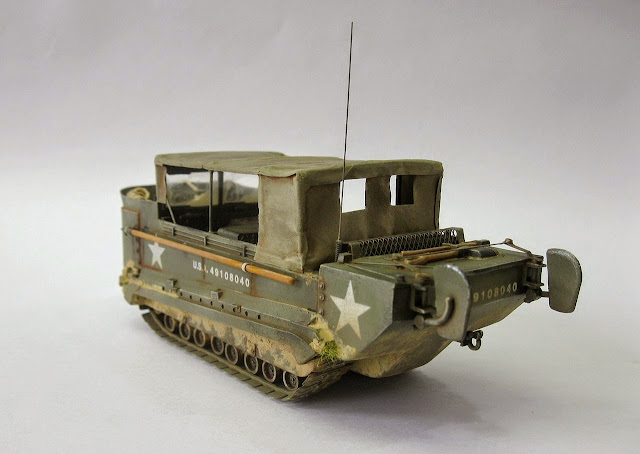 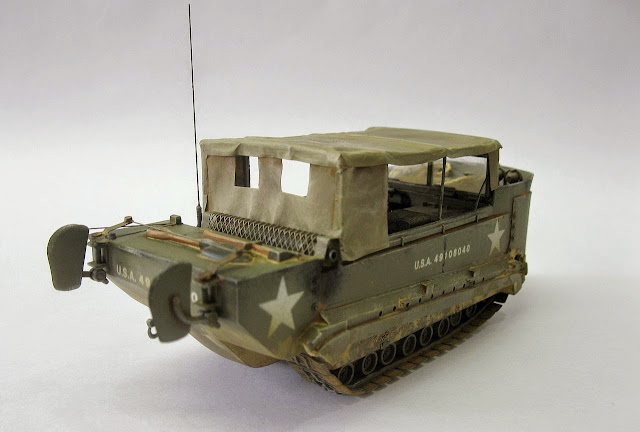 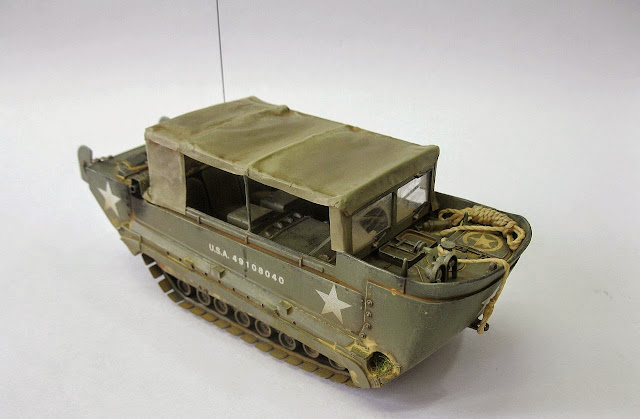 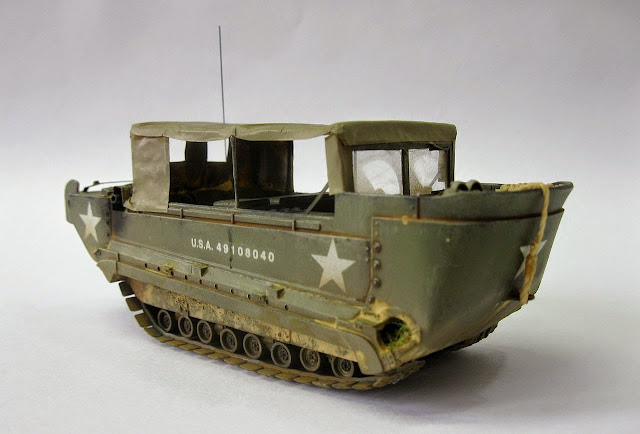