Jäger Kameraden!!!
Let's look at one more small weapon that was designed to fill a gap in a self-propelled anti-tank weapon that could be used by German forces while more powerful and deadly weapons were not yet available in sufficient numbers. The use and transformation of captured material in good condition into truly deadly vehicles was almost a characteristic of the German Army.
Today, we're going to visit this little girl who carries an efficient and deadly weapon: We're talking about 4,7cm Pak(t) Sfl. auf Fgst. Pz.Kpfw.35 R 731(f). I built this girl in 2002. 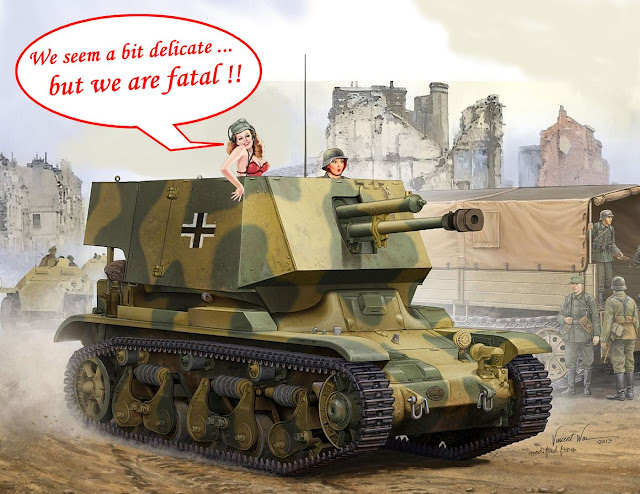 History:
Panzerjäger (German "armour-hunters" or "tank-hunters", abbreviated to Pz.Jg. in German) was a branch of service of the German Wehrmacht during the Second World War. It was an anti-tank arm-of-service that operated self-propelled anti-tank artillery, and made exclusive use of the tank destroyers, which were also named Panzerjäger. Soldiers assigned to tank hunting units wore ordinary field-gray uniforms rather than the black of the Panzer troops, while Panzerjäger vehicle crews wore the Panzer jacket in field gray.
Development:
From 1940, the Panzerjäger troops were equipped with vehicles produced by mounting an existing anti-tank gun complete with the gun shield on a tracked chassis (german or captured) to allow higher mobility. The development of Panzerjägers into the fully protected Jagdpanzer armored vehicle designs began before the war with the Sturmgeschütz - designated armored artillery vehicles, the initial German turretless tanks to use completely closed-in armored casemates, and continued until 1944, resulting in the fully enclosed Jagdpanzer "hunting tanks", purpose-built heavy-gun tank destroyers. These usually used upward extensions of both the glacis plate and hull sides to comprise three sides of their closed-in casemates. Panzerjäger continued to serve as a separate branch of the Heer until the end of the war, often replacing tanks due to production shortages. 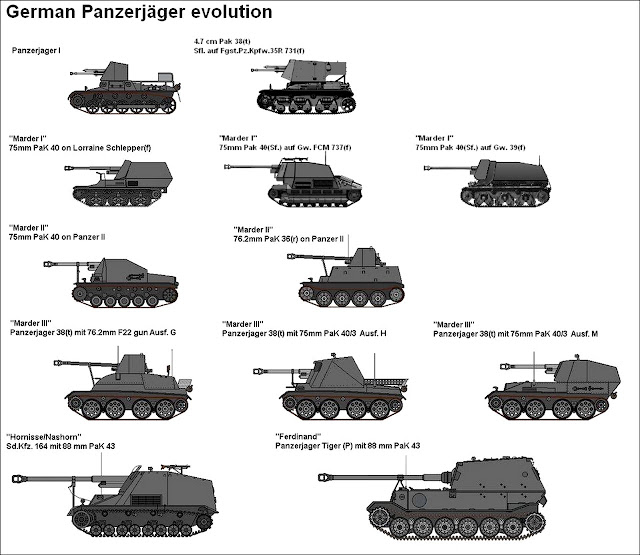 Initially, the use of German light tanks with an upgrade to their main weapons was initially the most obvious option, with the featherweight Panzer I tanks (Ausf A and B) the first test vehicles of this concept.
These small, agile and reliable tanks had their turrets (2 × 7.92 mm MG 13 machine guns) removed and in their place 3,7cm Pak 36 (Panzerabwehrkanone 36) guns were fitted, providing a cost-effective solution to the German shortage of mobile anti-tank weapons in infantry divisions. 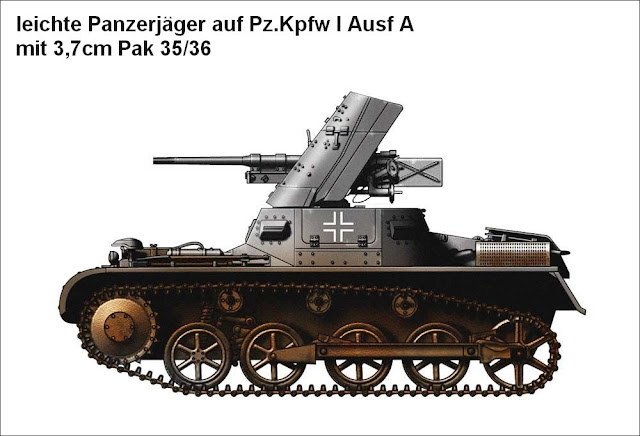 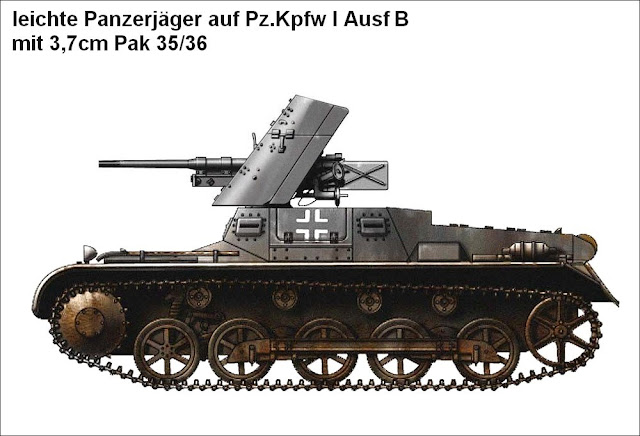 Despite the shortcomings of light armour and high silhouette, they were successfully used in their intended role of a self-propelled anti-tank gun. The same recipe was also used in captured vehicles. After the Battle of France and the first steps of Operation Barbarossa, Germany used several British, French and Soviet vehicles, collected in good condition, for this purpose. The anti-tank weapon used for these adaptations was the small 3,7cm Pak 35/36 gun, which was beginning to show its penetration weakness in the face of the evolution of the new tanks at the time. See some examples below...

Neither anti-tank guns nor Panzerjägers had any real armor to speak of, and while the Panzerjäger had a higher silhouette and was more visible than an anti-tank gun, it was also much more mobile, and was able to relocate or retreat far more rapidly than conventional anti-tank gun crews. The lack of armor meant little until the self-propelled guns began to take on more and more of the offensive duties of tanks as the war progressed and production lagged.
The 4,7cm Pak(t) Sfl. auf Fgst. Pz.Kpfw.35 R 731(f)
On the end of December 1940, Waffenamt 6 started a design project for installing the very good  4.7 cm Pak(t) onto the captured chassis (Fahrgestell Fgst.) of French light tank Renault R-35 (Pz.Kpfw. 35R-731(f)) to create a PaK auf Selbstfahrlafette (Sfl.) (self-propelled anti-tank gun). Originally, these were intended to be assigned to Infanterie-Divisionen that were not motorized.

A test vehicle development and construction contract was awarded to Alkett in Berlin-Borsigwalde. This first example of a 4.7cm Pak(t) Sfl. auf Fgst.Pz.Kpfw.R35(f) with a carbon-steel (not armor) casemate was completed on 8 February 1941. Demonstrated to Hitler on 31 March 1941, it was announced that a series of 200 had been ordered. The contract for assembly of 200 4,7cm Pak(t) Sfl auf Fgst Pz.Kpfw.35 R 731 was awarded to Alkett, which began work in February 1941 to meet a schedule for delivery of 30 per month starting in March 1941
Delays occurred, with the first 93 reported as completed in May 1941, followed by 33 in June, 5 in July, 22 in August, 28 in September, and the last 19 in October 1941.
Out of the total of 200, 174 were completed as Panzerjäger with 47mm gun and 26 as Command vehicles (Fuehrungs-Fahrzeuge), with a 7.92mm MG.34 in a ball-mount instead of a 4.7 cm Pak (t).
Three units issued with the type: Pz.Jg.Abt 559, 561 and 611 were to be formed and established at army troop level. As ordered on 27 February 1941 by the OKII Organizations-Abteilung, Panzer-Jaeger-Abteilung 559, 561 and 611 were to be rearmed with 4.7cm Pak(t) (Sfl.) beginning in April.  Each of these battalions consisted of an HQ unit and three Kompanie (Companies). Each Kompanie was to consist of three platoons (Züge) with three Sfl. in each platoon (Zug). There was an additional Kompanie sent to the Panzer-Jaeger-Abteilung 43, supplied with a few vehicles, to act as a reserve and training unit. The remaining vehicles would be mainly distributed in smaller numbers to various Infantry Divisions.
Panzerjäger-Abteilung (Sfl.) 559, 561 and 611 were outfitted with the first 81 4.7cm Pak(t) Sfl. auf Pz.Kpfw.35R 731(f) and 12 Fuehrungs-Fahrzeuge that had been completed in May/June 1941.
At the start of Operation "Barbarossa" on 22 June 1941, Pz.Jg.Abt.(Sfl.35R) 559 was assigned to the  Heeresgruppe Nord, Pz.Jg.Abt.(Sfl.35R) 561 and Pz.Jg.Abt.(Sfl.35R) 611 in Heeresgruppe Mitte.
Things didn't go well for these little destroyers in the early days of operation on the Soviet Front: on 5 July 1941, the Commander of the Pz.Jg.Abt.611 reported that all French vehicles were inoperative due to mechanical failure.

In the color profile below, notice the cartoon on the vehicle's front armor: a hammer hitting a British infantryman's head locates our destroyer in the Western Theater of Operations... Maybe some rancor or challenge right after the Battle of France... Really, everything suggests that this vehicle is in Western Front, in the quiet days of 1941-42!!

On July 30, 1941, Wa Pruef 6 awarded Alkett a contract to design and produce a prototype of the chassis Sfl. auf Pz.Kpfw.R35(f) armed with more powerful anti-tank weapon, the 5.0 cm Pak 38.
With an armor superstructure 25 mm thick on the front and 20 mm on the sides and manned by a crew of three, the 5,0cm Pak38 Sfl. auf Fgst.Pz.Kpfw.35R 731(f) was predicted to weigh 11.5 metric tons and have a maximum speed of 20 km/h. This vehicle was scheduled to be delivered and tested in August 1941, but reports on this fact were lost.
The still operational 4.7cm Pak(t) Sfl. auf Pz.Kpfw.35R 731(f)s fought their last battles fighting against the Allied Invasion of Normandy, where the limitations of age and lightness of armament were evident. But I don't agree with what I read in many references. that such vehicles in 1944 were "useless rubbish". IMHO, "...a small gun is better than none!"
And I think that whoever writes such nonsense has never seen the result of a 47mm projectile fired on bodies, trucks or even armor in more unprotected areas of some tanks... If I were in combat, inside a fox hole , behind a hedge or over a truck, the last thing I would want to see would be one of those "poor French junk" pointing its "weak" 47mm gun at me!!!
Later, the Allies would meet them again at Arnhem, where they equipped Pz.Jg.Abt.684 (commanded by Hauptmann Pulkowski) and possibly the 59. Infanterie-Division.

Of all 200 reconstructed vehicles, only one 4,7cm Pak(t) Sfl. auf Fgst. Pz.Kpfw.35 R 731(f) is preserved. This brave little girl can be seen exposed to the weather with many parts of the rear superstructure missing, at the Military Museum in Thun, in Switzerland. 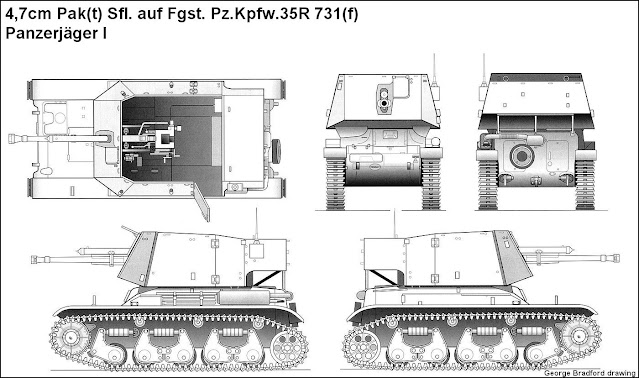 In those distant times, access to a digital camera was a privilege for few...and the few images I have of this constructive stage are as follows, but they give a good idea of what the conversion kit was like: photo-engraved metal parts and resin parts, very well made...
...with the exception of the 47mm cannon, which was very rough and cast in white metal, in one piece... Simply awful!! That's why I had to replace it with the metal barrel from Jordi Rubio!


Instead of filling the hundreds of little bubbles with putty, I opted for laminating the top of the ammo depot with an extremely thin plasticard plate. It was great and did not interfere with the dimensions of the model...


But so that things don't get too delicate, I decided to make a scheme of markings the time of the Allied Invasion, when these brave and fragile girls faced forces in number and quality much greater... But they didn't surrender without a good fight.
Meet Altes Schwein (Old Pig), a 4,7cm Pak(t) Sfl. auf Fgst. Pz.Kpfw.35R 731(f) belonging to Army Group B, 89th Army Corps, 15th German Army, 712th Infantry Division (Wehrmacht), 712nd Anti-tank Company - Platoon A, in batltes around Sheldt River (near Antwerp), in Belgium. September 1944. 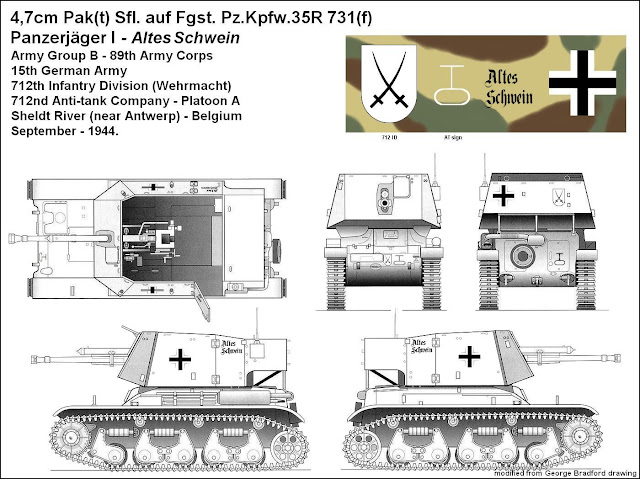