Artillery Men !!!
Today our subject is the rare and armoured version of one of the most famous German artillery tractors: our today's starlet is the SdKfz 8 DB10 12t Gepanzerte. 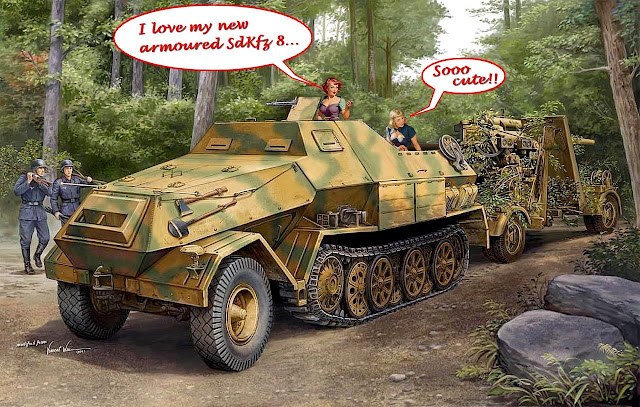 History:
The SdKfz 8 (Sonderkraftfahrzeug 8) (special motorized vehicle 8) was a German half-track that saw widespread use in World War II. Its main roles were as a prime mover for heavy towed guns such as the 21cm Mörser 18, the 15cm and 17cm Kanone 18, the 12,8cm FlaK 40 and the 10.5cm FlaK 38, however it was also capable of serving as an infantry transport. Approximately 4,000 were produced between 1938 and 1945. It was used in every campaign fought by the Germans in World War II, notably the Invasion of Poland, the Battle of France, the Balkans Campaign, the Eastern Front, the North African Campaign, the Battle of Normandy and the Italian Campaign.


The Sd.Kfz. 8 had a ladder frame chassis. The power was provided by a Maybach 12-cylinder, water-cooled, 8.52 litre  HL 85 TUKRM gasoline engine of 185 horsepower.
It had a semi-automatic ZF transmission with four forward and one reverse gears. The driver selected the desired gear and initiated the shift by depressing the clutch. It had two fuel tanks, one of 40 litres and the other of 210 litres capacity.
Both tracks and wheels were used for steering. The steering system was set up so that shallow turns used only the wheels, but brakes would be applied to the tracks the farther the steering wheel was turned. The drive sprocket had rollers rather than the more common teeth. The rear suspension consisted of six double roadwheels, overlapping and interleaved in the usual Schachtellaufwerk system used for German half-track vehicles, mounted on swing arms sprung by torsion bars. An idler wheel, mounted at the rear of the vehicle, was used to control track tension. The front wheels had leaf springs and shock absorbers.

The upper body had a crew compartment with three bench seats, one for the driver and his assistant, and two others for the crew. The rear cargo area contained storage compartments, one on each side and two in the rear. The windshield could fold forward and was also removable. A convertible canvas top was mounted above the rear storage compartments. It fastened to the windshield when erected. The Sd.Kfz. 8 was initially designed to have a towing capacity of 12 tonnes (12 long tons; 13 short tons), but the wartime DB 10 could tow 14 tonnes (14 long tons; 15 short tons).

Design and development
Preliminary design of all the German half-tracks of the early part of the war was done by German Engineer Ernst Kniepkamp of the "Military Automotive Department" (Wa Prüf 6), in 1933.
His designs were then turned over to commercial firms for development and testing. Daimler-Benz had been working on its own half-track design during 1931-32, the Daimler-Benz ZD.5. It weighed 9.3 tonnes (9.2 long tons; 10.3 short tons), used a twelve-cylinder, 150 horsepower (150 PS) Maybach DSO 8 gasoline engine and its upper body had three bench seats behind the driver.
Its suspension was based on the World War I-era heavy tractor Marienwagen II and bore absolutely no relation to the interleaved roadwheels and torsion bars used by the various models of the Sd.Kfz. 8. 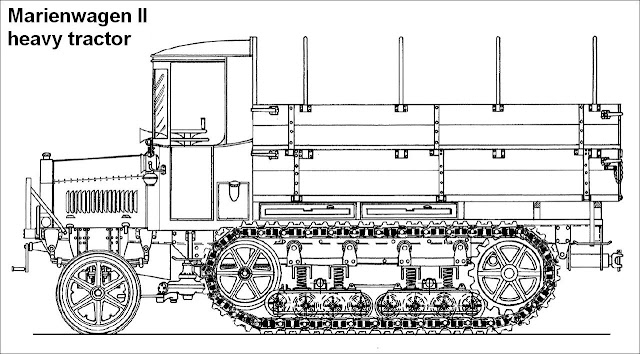 Daimler-Benz combined the best of both designs in the DBs 7 prototype which appeared in 1934. It used the same engine as the ZD.5, but otherwise bore little resemblance to the older model other than an upper body that had two bench seats for the crew behind the driver's seat. This upper body remained the same over the life of the Sd.Kfz. 8. It weighed 14.4 tonnes (14.2 long tons; 15.9 short tons) and could pull loads of 12 tonnes (12 long tons; 13 short tons). 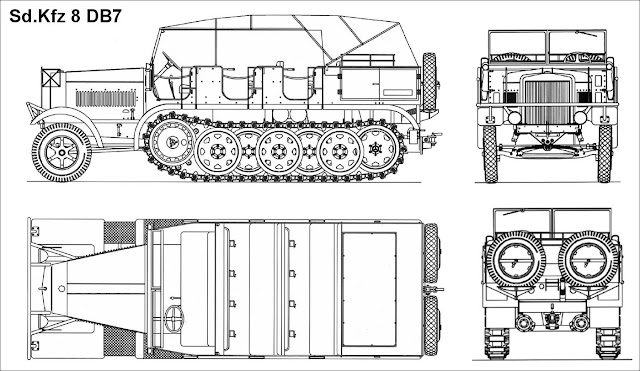 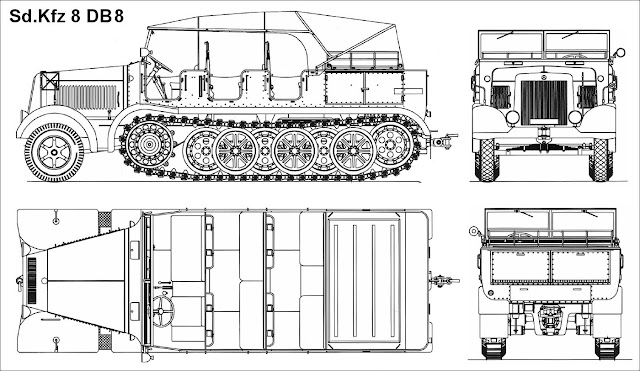 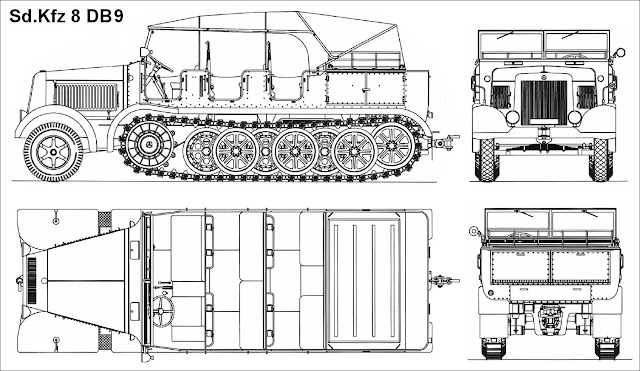 It used the Maybach HL85 TUKRM engine, could carry an 8000 kilograms payload and could tow a 14 tonnes (14 long tons; 15 short tons) load. Daimler-Benz tried unsuccessfully to use their diesel OM 48/1 engine, but it was repeatedly rejected by the Army Weapons Office. The DB 10 was a refined version of the DB 9 and was introduced in October 1939 and was produced for the duration of the war. 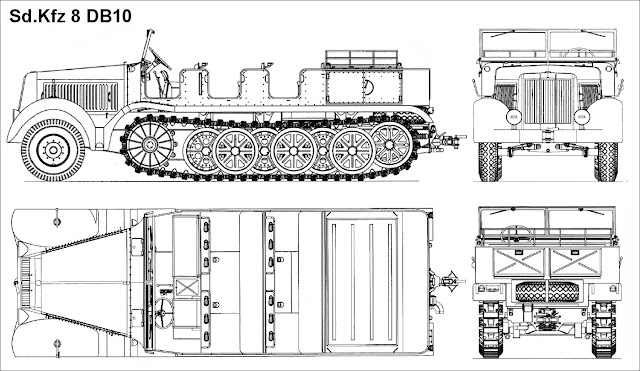 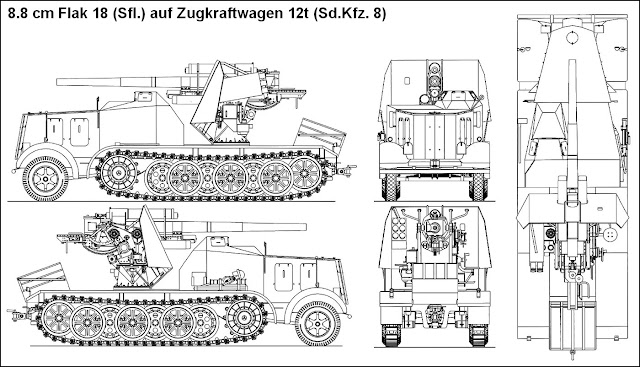 The driver's cab was replaced by a lower, armored cupola and the engine compartment was lightly (14.5 millimetres) armored. The vehicle weighed 20 tonnes (20 long tons; 22 short tons), was 7.35 metres long, 2.8 metres tall and 2.65 metres wide. The gun could fire directly ahead without any problem, but traverse was limited to 15° to each side by the gun shield. Elevation was between -3° and +15°. All ten were assigned to the first company of the anti-tank battalion Panzerjäger-Abteilung 8 which participated in the Invasion of Poland in 1939, the Battle of France in 1940 and Operation Barbarossa in 1941.

The company was redesignated as Panzerjäger-Kompanie (Anti-Tank Company) 601 in January 1942 and then as the third company of Anti-Tank Battalion 559 the following April. It reported that the last three vehicles had been lost by March 1943.


A last version of this versatile tractor can be seen in photographic shots showing a very rare completely armoured version. In the meantime such a vehicle has been found in Poland and the following characteristics can be reported.
The whole vehicle was covered with sloped 14.5mm thick armour plates (bullet proof). In the rear two or four doors can be seen.

The front axle of the two rear doors vehicle was equipped with solid rubber tyres. Other photographs show air filled tyres and four doors in the rear. As far as licence plates are visible. they only show Luftwaffe units.


No further information is known, however, in 1999 one of these vehicles was found in the Pilica River in Poland. The vehicle, which has since been restored in 2005, is fully functional and can be admired in a museum in Poland (Pilica River Open-air Museum).
About this rare girl, Michal "Wojt" Wojtczak , a polen friend, tell us:"...German troops were retreating across the bridge over the Piłica River, fleeing the Russians. At the beginning of the movement, the bridge was well protected, but the Russians were approaching dangerously. As a result, the bridge was mined with explosives. Apparently, the recognition failed and the Russians were closer than previously thought. From that fact, there are two versions of what happened:
1 - The vehicle broke down while crossing the bridge, was abandoned and exploded with it, falling into the river...or
2. - Apparently, witnesses report that the vehicle was still crossing the bridge and at that moment, the Russians appeared. To prevent Russian troops from crossing the bridge, it was blown up. And that means that Sd.Kfz 8 was sacrificed and fell into the river with the crew, for the benefit of the rest of the German army. When it was rescued, the vehicle was in good conditions, despite the years and conditions ... "

Production and use:
Daimler-Benz and Krupp were the main builders of the Sd.Kfz. 8 during the war, but Krauss-Maffei produced 315 in 1940-41 and Škoda joined in the last years of the war.  Approximately 4000 were built in total. The Sd.Kfz. 8 was used by Czechoslovakia after the war, but it is not known if production continued at Škoda or when they were finally discarded. The Sd.Kfz. 8 was also used by Romania during the war.
Unlike most of the other German half-tracks, the Sd.Kfz. 8 was almost always used as a tractor for heavy artillery pieces and was not modified for other roles.

The kit:
For this project, I choose the kit SdKfz 8 DB10 Gepanzerte 12t (#01584) from Trumpeter.
Starting the building...First of all, how big is the SdKfz8 gepanzerte:
The engine and the gear box: amazing details and a sad observation: all these details will be hidden ... The only option to see the details of the engine would be the open top panels, but aesthetically, this is not the best option ... I think I will do something heretical in relation to this...

While I think about how not to be so heretical, let's do a little repair on the drive sprockets of this tractor. According to Terry Ashley from PMMS, it is necessary to correct the positioning of the sprocket drive's teeth in relation to the reinforcement ribs of the part ... See the details below:

But first, build the chassis:

I will cast the lower portions of the engine and gearbox and will keep the original detailed parts for future use. It is a waste to put these beautiful pieces and close them later ... And as only the lower parts appear we are going to make clones of these portions. For that, I will use a material used by dental laboratories to replicate models. It is a jelly called reversible hydrocolloid (agar-agar), because it liquefies at high temperature and gels at room temperature. The great advantage of this is that it is reusable ...

Now that the heresy has been committed, it is time to duplicate the pieces ... 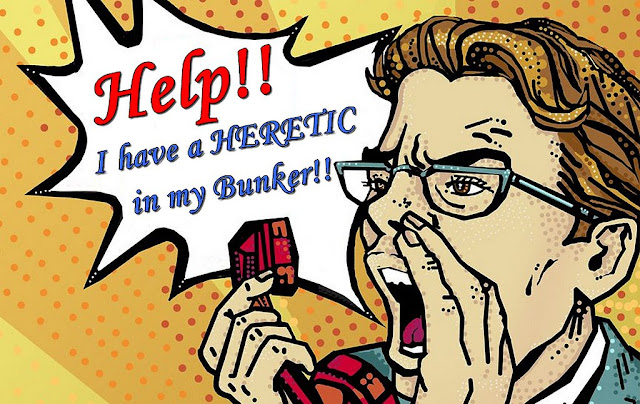 Use substances that do not "fight" with water in the gelatin, such as polyester resin and self-curing dental acrylic resin. DO NOT USE POLYURETHANE RESIN. The polyurethane reacts with the gelatin water, preventing its use. In my case, I used dental acrylic: fast and cheap. 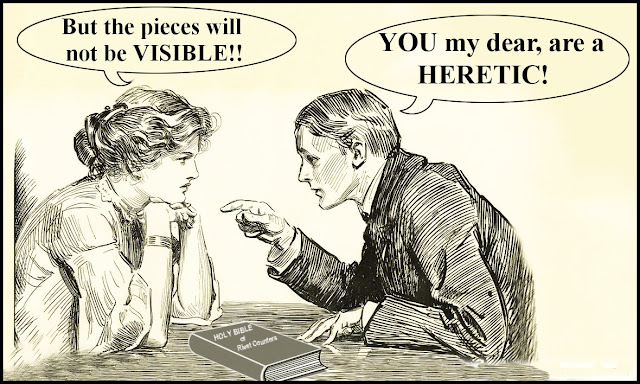 Well ... after all this filthy sin, let's go back to orthodoxy !!! Rear suspension time !!

First step before "close" the hull, painting and detailing the interior...The kit comes with a decal sheet with detailed dashboard. The problem is that the decal is soooo big... If I use the decal like this, I will have to use liters of Decalsoft and it is very likely that the thing will be ugly ...


Now, I can glue the upper hull in the main body...
But, first, painting and markings... As my girls are "late war" machines, both will have camouflages and colors typical of the end of WWII. The markings are a "poetic license" based on historical research, perhaps the third vehicle in the series never photographed ... But... let's go: here is a profile with the colors and markings of my SdKfz 8 Gepanzerte:


A little bit of Chinese torture: LBL tracks ... But those are easy to build ... Using high technology: two popsicle sticks as guides ... 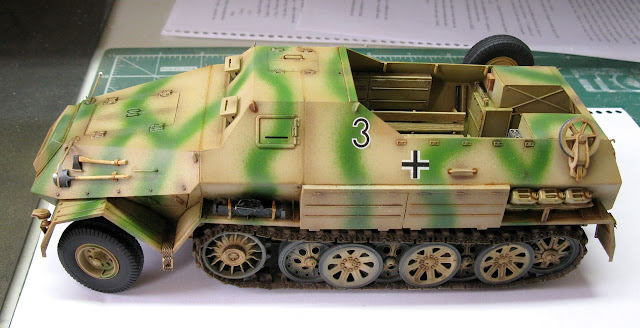 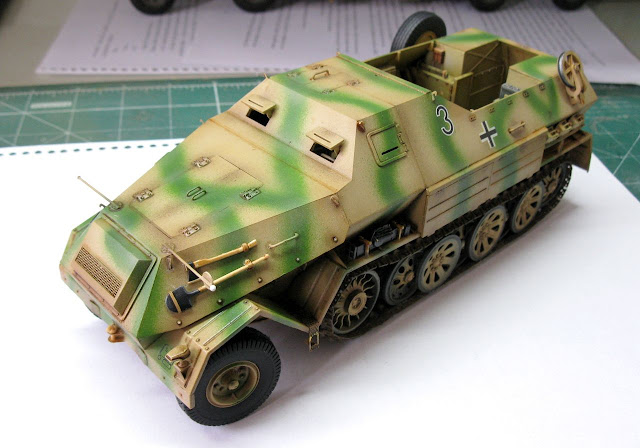 After the weathering, the girl was finally ready. Let's admire the SdKfz 8 DB10 Gepanzerte 12t armoured heavy artillery tractor, in the final days of the Nazi German, working with Luftwaffe near Berlin, in April of 1945. 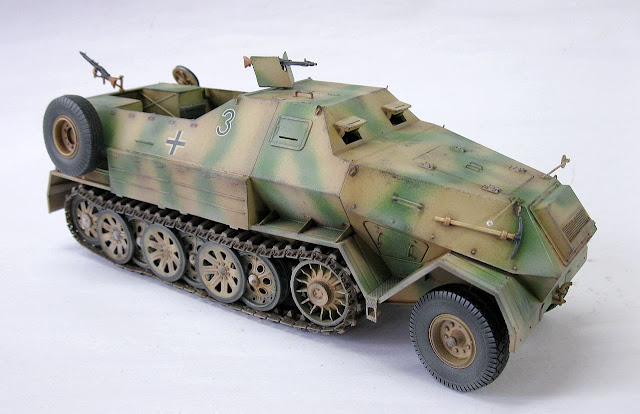 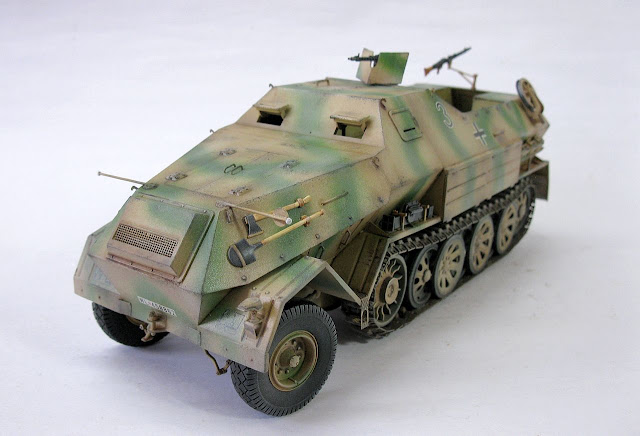 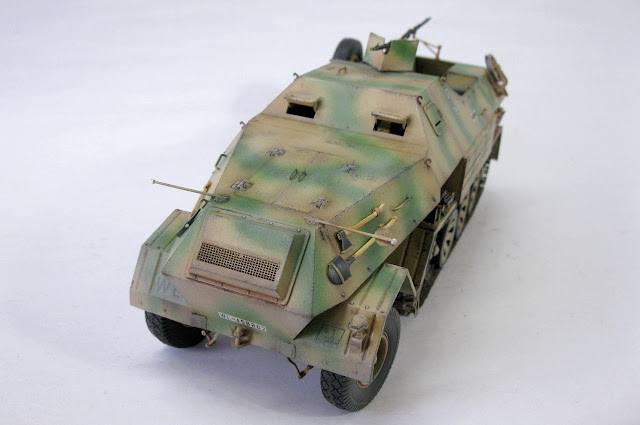 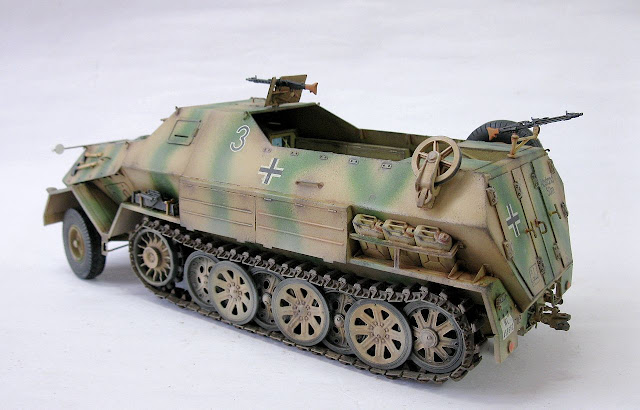 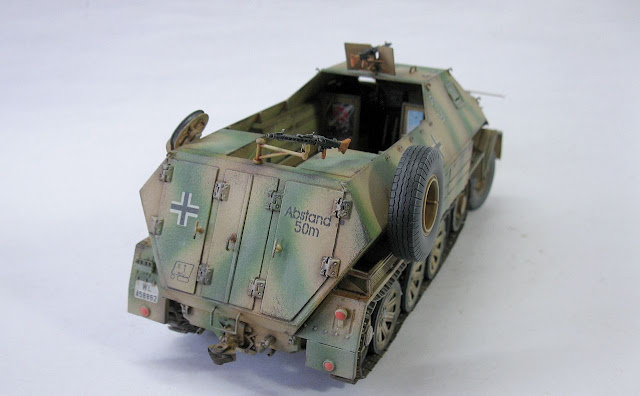 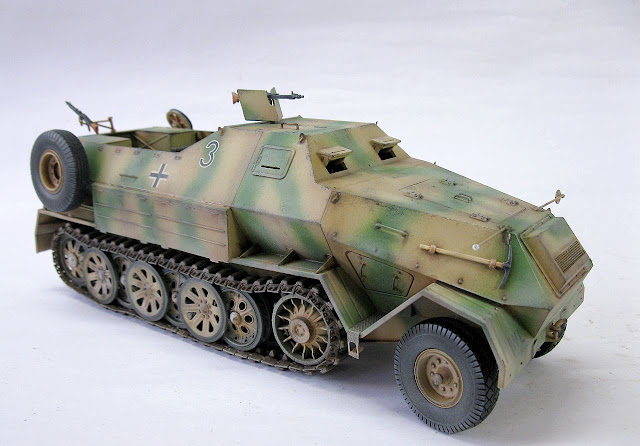 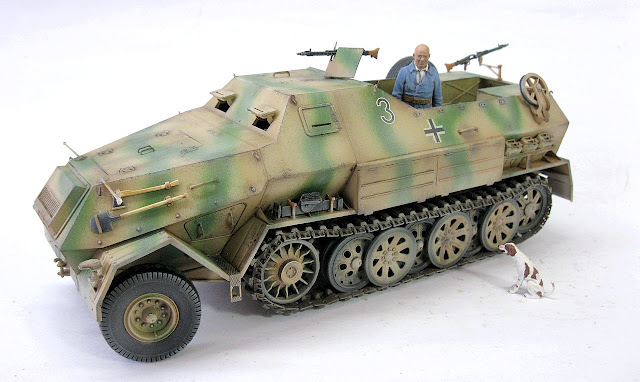